It’s Good to be Queen

The title isn’t exactly a shocker, is it? The last few days in Edinburgh have erased any doubts we may have harbored. Yesterday,  we visited the Palace of Holyroodhouse. This gem is the summer residence of the Queen and the members of the Royal family. Areas are open to the public, but the Royal Apartments are on the third floor and therefore off limits to mere mortals. No matter, we had a fabulous time. The public rooms are beautiful and the gardens are spectacular. With any luck, I will post some pictures for my flower loving friends. The Rhododendrons were the prettiest I have ever seen. I loved seeing the room where the Order of Something or Other was bestowed upon the likes of Sean Connery. The dining room was fabulous, but I must say that the Historic Apartments of Mary, Queen of Scots’ Chambers held the most riveting tale. The ruins of the 12th century Abbey were just that, but still cool to see.

Today we visited another Royal palace, although this one was floating. We visited the Royal Yacht Britannia. This field trip won an easy 12 thumbs up. Even Harvey enjoyed this morning. (I must say, yesterday he found the Palace at Holyroodhouse a bit tedious and just wanted to go sleep it off.) Anyway, if your travels ever bring you to Edinburgh, don’t miss the yacht. It was a pure joy to see. The yacht was decommissioned in 1997 and has consistently been Scotland’s top tourist attraction for a long time. It’s no wonder. It was so fun to see the ship and we were free to go all over and take pictures. There was an audio guide and the staff was super friendly. I loved seeing the old pictures of the Royal family through the years. 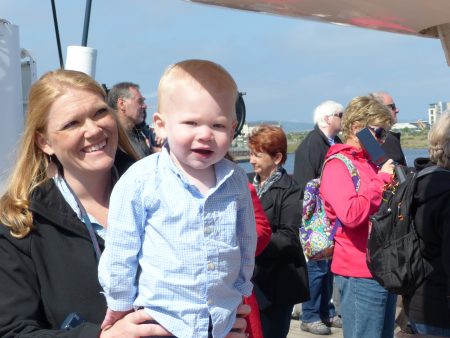 Haley and Harvey aboard the royal yacht Britannia

As we left the ship, I confessed to Haley that I think I am a closet Royal family groupie. I just love all things related to the Windsors. Haley, Michael, and I talked it out over a few pints this afternoon while Rick, Logan, and the Boy King went for a stroll. We explored the concept of the Royal family and those families in the USA that the media would have us deem American Royals. It did not take long before we agreed that the media needs to get over it. Americans are intrigued by the concept and the media like to tell us who should be considered royalty, but we will never buy that. Still, for some crazy reason, it’s fun to be a voyeur to a world so foreign to us.

Speaking of royals, the Boy King needs a bath. Michael and Haley have taken Logan on a ghost walk, so we are serving as the Boy King’s humble servants for the evening.