Music City is humming. It hums a little louder every time the sun sets. Ninety six people move here every single day and add their voices to the song of the city. This is but one interesting tidbit of trivia I learned in Nashville. But most of all, I was shocked, and I do mean shocked, to learn that Piggly Wiggly was founded in Tennessee. All my life I have been under the false impression that the Pig was South Carolina born and raised! But seriously, I also learned a lot of history about this great city and the state of Tennessee.

I took my first food tour this weekend. The tour was lead by a gal named Amanda from a small company called Local Tastes of Nashville. I figured that if I was going to do a food tour, I bloody well better make it a walking food tour. The last thing I needed to do was ride around eating all over town. The Gulch Tour was full, so I signed up for the Germantown Tour. Since I knew nothing about Germantown, I figured it would be a fun way to learn about the area. Good thing I wisely skipped breakfast and walked the mile or so to the meeting point. When I asked the valet at the hotel about walking to the farmers market, he said, “Naw, you can’t walk–it’s real far.” “How far?” I asked. He quickly responded, “It might be close to a mile.”  I decided to tough it out since I had it on good authority that a food court awaited me at the end of the rigorous trek. Turned out to be downhill. I must be living right!

Anyway, it was a fabulous tour and the food was not bad, either. By the fourth stop, I was screaming UNCLE! I had to walk away from the mac ‘n cheese at Cochon Butcher, but I came back for a strong finish with the burnt butter dark chocolate truffle. My hands-down fav taste was a half of a Reuben sammich at a tiny neighborhood restaurant called The Mad Platter. Oh, my goodness, I really must mention the best cupcake I have ever tasted. It was a lovely lemonade confection from a little place called Cupcake Connection. (Even more lovely was the story of the family who built the company and how they came back from the destruction that was Hurricane Katrina.) But enough about the food already. Let’s talk about the area and the history.

Germantown was the area where, obviously, Germans settled. Duh. The area fell into disrepair and for a long time was considered the seedy part of town. Then, as often happens, the area became smoking hot on account of its fabulous proximity to downtown Nashville. Even a shabby rundown house that looks like bulldozer bait fetches over a half million easy sneezy. Location location location.

The history of Tennessee is written in stone at the Bicentennial Mall Park in Nashville.

But I jumped the proverbial gun. Before you come to Germantown, you walk by the Bicentennial Mall Park. There you can pick up enough Tennessee history to earn a degree in the subject while you walk your dog. Talk about multi-tasking! The display is nothing short of awesome. (It was ironic that, while I was standing in Bicentennial Mall Park, Rick sent me a text telling me he was down in the Vanderbilt area standing in Centennial Park. We were one hundred years and about ten miles apart.) There in The Bicentennial Mall Park you will also find the Carillon Bells of Nashville. They chime with great tunes from Tennessee and from Nashville’s most beloved musical artists. The playlist was loaded with the Tennessee Waltz as well as a little Elvis (no last name needed) and some Patsy Cline when I was in the area. The bells are atop columns removed from the Tennessee state capitol building when it was renovated. There is a column for each county in the state.

This seems like a good time to tell you how Nashville got the moniker “Music City.” What you think is no doubt as incorrect as was my lifelong false narrative about the Pig. You think it has everything to do with country music. Am I right? Ok, this is a pretty long story, so grab a cold one of your choice and get ready to be disabused of your silly false notion. Here we go. In the last half of the 1880s, just after the Civil War, Fisk University was founded in Nashville as a university for black students. They assembled a musical group to preserve the soulful old spirituals from the days of slavery. Called the Jubilee Singers, the ensemble traveled through Europe singing in order to raise money for the university because the fledgling institution was literally down to its last dime. They left Nashville in 1871 hoping to inspire people the world over to open their hearts and wallets for the school. Their mission was wildly successful. They even performed for Queen Victoria at Buckingham Palace. As the story goes, she was very impressed and was said to have exclaimed, “Well, you must be from Music City!” The Jubilee Singers preserved the spiritual as a musical genre and helped Nashville find its nickname long before country music found its voice.

After the food tour, I moseyed around the farmers market for a while. Although the thermometer was stuck in the nineties, the beautiful pumpkins gave me hope that Autumn may come one fine day in the near future. Despairing that I would have to leave them behind since Delta would not find those pumpkins worthy of overhead bin space, I set my sights on the Tennessee State Capitol and headed up the hill. 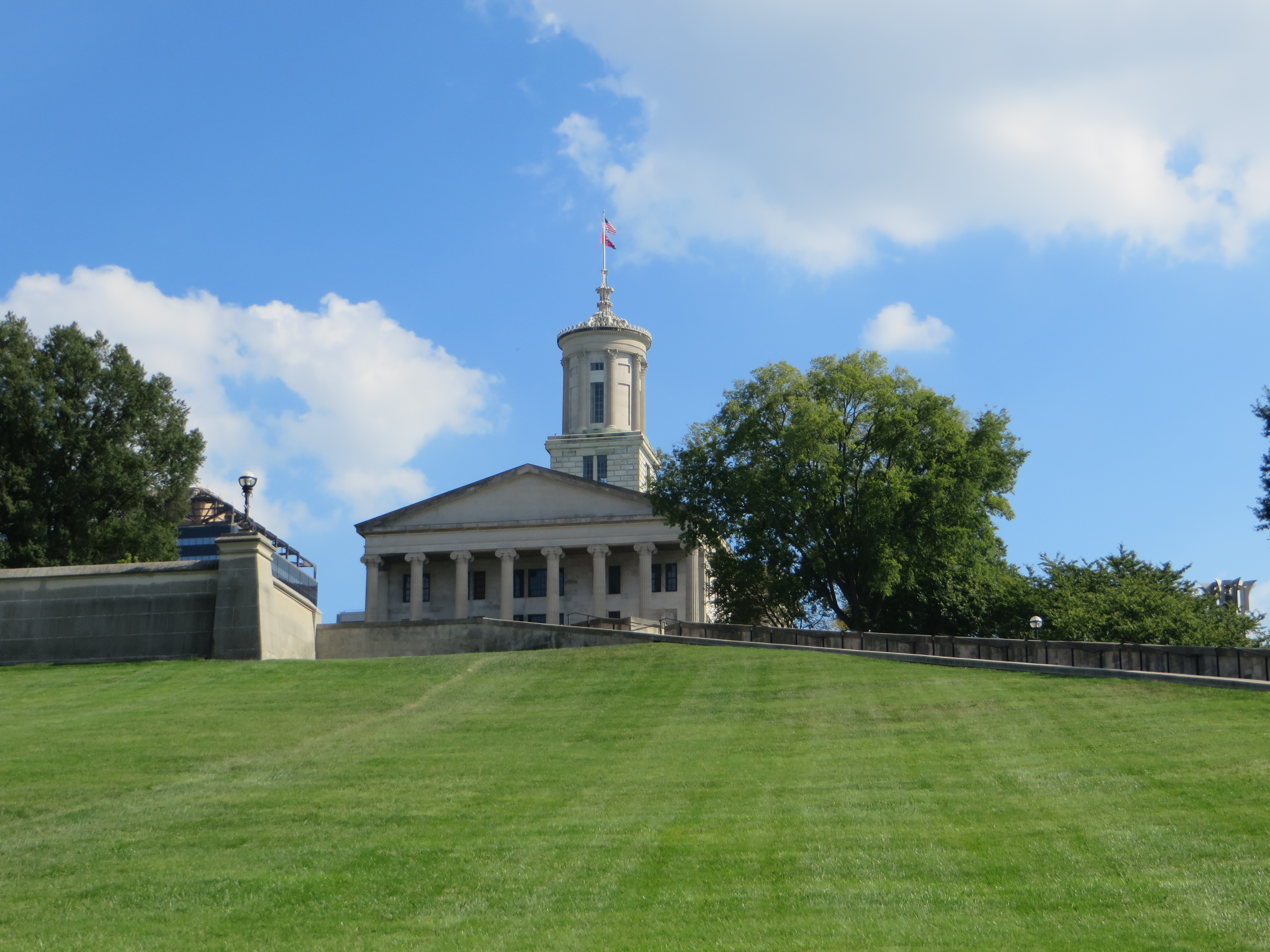 The beautiful colors of Fall at the Nashville Farmers Market.

The current home of the Tennessee legislature occupies quite a dominating piece of real estate. I lost count of the steps up that hill. Once there, I was reminded that President Polk, one of the President Johnsons, and President Jackson were Tennessee natives. I decided to go inside for a look around. There I remembered the story of Rep. Harry Burn and the Nineteenth Amendment of the US Constitution. It turns out that giving women the right to vote hung in the balance in the state of Tennessee. The Tennessee legislature was set to vote on the amendment and the outlook was not good for passing it. Young Harry Burn received a telegram from his mother just prior to the vote. She admonished her 24 year old son to do the right thing, and being an obedient son, he changed his mind and voted to ratify the amendment. She told him that she really wanted the right to vote before she died. Well, the rest is Tennessee history as the Volunteer State turned the tide and the roster of voters in the USA immediately doubled in size. Harry’s party was furious with him, but Rep. Burn said he would take his chances with the wrath of his party any day over the wrath of his mother.

About a year ago, Rick and I thought it a good idea to try to see as many state capitols as we can. (Yes, we realize we are a little late getting to this party.) The Wisconsin state house was the second we’ve seen, South Carolina obviously being the first. Sorry, Tennessee, but Wisconsin is the clear winner on our little list of capitols we’ve toured. The Wisconsin State House is flat out beautiful. Astoundingly beautiful. Still, the Tennessee State House is a nice building. The guard and I pretty much had the place to ourselves as it was Friday afternoon. Both the Senate and House of Representatives chambers were empty. I guess lawmakers are like construction workers. They get their checks around lunchtime on Friday and call it a week. That is not necessarily a bad thing in the case of legislators, now is it? It kinda stinks when you have a construction project underway and your crew forgets to come back after lunch on Friday. Oh, well. I went ahead and signed the Governor’s Guest Register and headed for the exit. I bet he is so sorry he missed me. See what you miss when you cut out early on Friday?

The lights are on but no one is home at the Tennessee State House on a Friday afternoon. 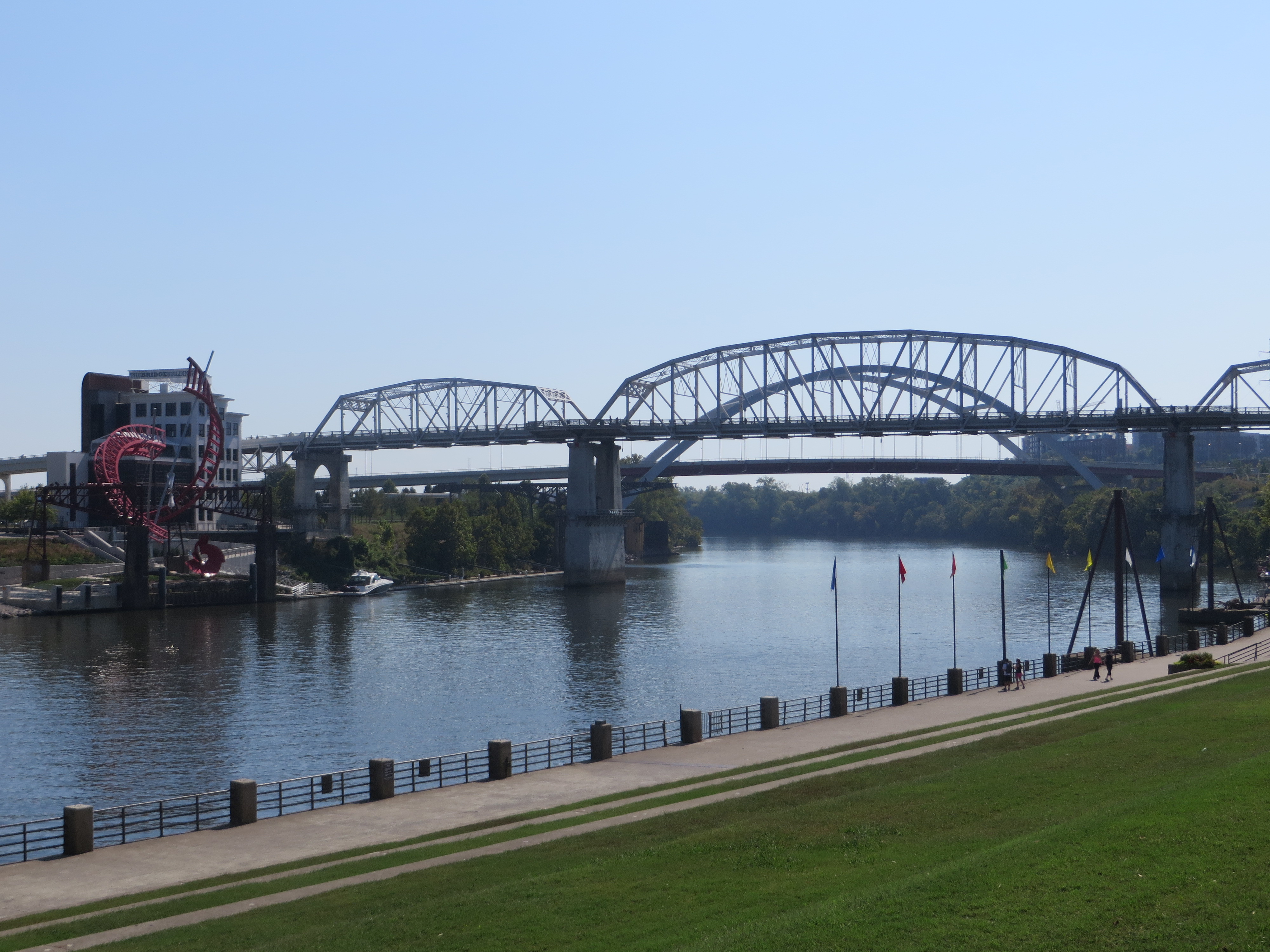 But why stop at one tour? I took yet another one. A Really Entertaining Tour. It was Really Entertaining and Really Informative. Ryan, the owner of the tour company, took us on a walk through time and a walk through Nashville’s most notable landmarks. Ryan pointed out that the first combination candy bar was created in Nashville in 1912 and was unveiled under the name of the Goo Goo Cluster. They still make the original, but they also whip up a peanut butter concoction as well as one they proclaim to be “supreme.” I have not tasted it, so I cannot vouch for the veracity of this claim.

Here is another “first” for Nashville. Although Las Vegas is proud to be numero uno in bachelor parties, Music City leads the way in batchelorette parties. How Nashville became the destination for future brides and their bridesmaids is inexplicable, but I can tell you that the Nash Trash Tour Company flat refuses to take batchelorette parties on their pink bus. Apparently, when bridesmaids arrive in Nash Vegas, sometimes a “I’m the wildest” attitude surfaces out of the blue and things get out of hand on the Pepto Bismobile. The lady who owns the company would probably not appreciate my renaming her bus, but I saw that bus at the farmers market and I think the name fits.

Nashville bills itself as the “Athens of the South.” You will find a replica of the Parthenon right in the city and there is no shortage of majestic and columned buildings all around town. Turns out that the city’s elders were aghast at what they saw as hillbilly music defining their fair city. Instead of clutching their pearls and retiring to their fainting couches, they set about to redefine Nashville as more refined by adorning buildings with columns and statues. Did it work? Who’s to say. It’s a fun city with enough culture to balance the rowdiness, in my opinion. The symphony has a large and loyal following as does the Grand Ole Opry. To each his own, right?

Last story. I’m getting tired of this post and it’s not like I’m getting paid for banging on for hours, for crying out loud! I hope you have enjoyed my tales from Music City.

Ryan, my Really Entertaining Tour guide, pointed out that Nashville is the home of the first school for seeing eye dogs. He said there was not much more to add to this bit of trivia, so he decided to throw in a joke so that we would remember the moment. So, I think I’ll finish this post with a laugh. Here goes.

Because it scares the crap out of the guide dogs.