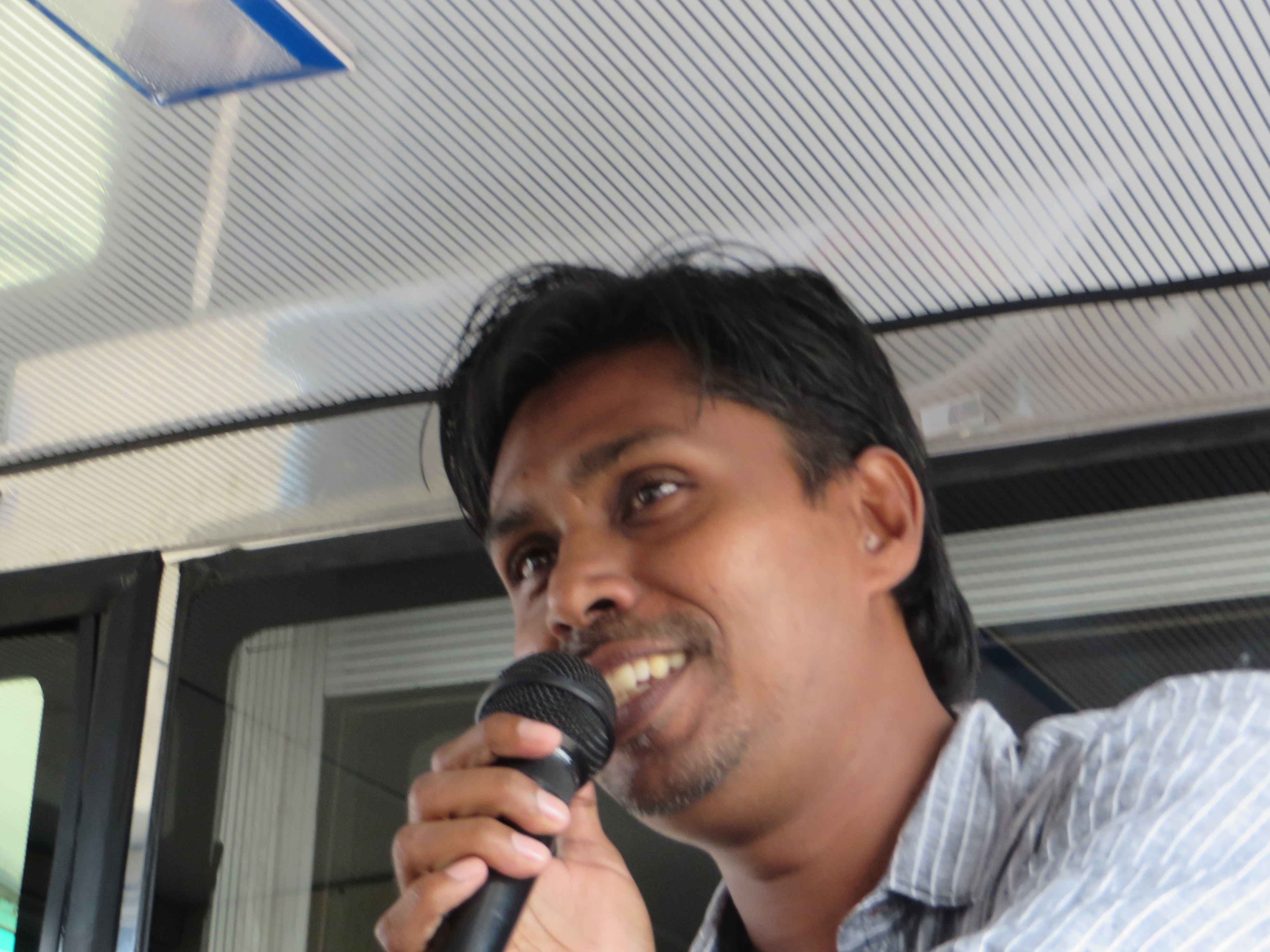 Meet Clyde. Clyde Rosario. Clyde was our guide as we ventured out to the backwaters of Alappuzha. That was a fun excursion, but listening to Clyde talk about life in India was more fun. Clyde is a walking, talking personification of the mash-up of cultures that has occurred through the centuries here in the state of Kerala. Take one look at him and tell me you would have ever guessed that he would have a name like Clyde Rosario. Turns out, his last name came from some Portuguese “influence” in his family tree and his first name is a nod to the British influence here in Kerala.

The Portuguese were the first to show up in this part of India looking for “black gold,” AKA black pepper. Believe it or not, Vasco da Gama was buried right here in Cochin. (Later, his son had his body exhumed and he now rests in peace in Lisbon.) Of course, the British showed up and totally overstayed their welcome. But while they were here, they noticed that the shallow little harbor here could use some work, so they brought in a big shot from the Suez Canal job site and tasked him with making a few improvements. With all the dredged dirt, a pretty good sized island was created and the harbor is now great for all types of water based trade and commerce. The Brits gave India back to the Indians shortly after the work was completed, so they walked away with the “All That Work For Nuthin'” grand prize as a lovely parting gift.

Clyde reminded us that there are over 1,600 dialects in India. I think there are something like twenty-two official languages. He said that many Indians can only communicate in English because they cannot understand each other’s dialects. Since they all take English in school, it’s only natural that they use that language when confronted with a dialect they cannot understand. Clyde says this is exactly the case when he is at home. His wife’s native dialect is incomprehensible to him, and she cannot understand a word of his native tongue, so they speak English at home.

If there is one thing that our fellow cruise passengers from all over the world always agree on, it is our total fascination with the concept of arranged marriages. I’m telling you, once the subject is brought up, everyone exhibits total disbelief that anyone in their right mind would enter into such an insane arrangement. So, when Clyde mentioned his wife, everyone waited patiently for someone else to get real personal about Clyde’s marriage. Clyde was happy to oblige with details. Turns out that Clyde and the girl who would become his bride met in a way that is probably vexing many a traditional  Indian parent. They met on Facebook.

Oh, the shame! Oh, the humiliation! What will we tell our friends? It’s the parents’ job to find the perfect spouse for their children. Kids today! How could they possibly know what they need or want in a spouse? (I find it interesting that both of our guides referred to the prospective bride and groom and “the boy and the girl.” Obviously, everyone considers these two children, but I saw that groom yesterday, and he was no child, and she was every bit the young lady.)

So, Clyde and the girl of his dreams had to convince parents, priests, and pastors that they were perfect for each other. Her parents immediately disapproved because Clyde’s home was a twenty seven hour train ride from their home. I guess they thought that distance was a sure-fire predictor of marital disord, but Clyde’s betrothed stood her ground. Next they had to win over the priest and pastor. Clyde says that he grew up Catholic; his wife grew up Protestant. Clyde freely admitted that he believes in God, but he is not so fervent as his wife, whom he describes as a “big Jesus fan.” Therefore, he was willing to jump ship on the Catholic thing, thereby scoring a few more points with the future in-laws. So, with all obstacles hurtled, they were free to plan the wedding of her dreams, and they are now the parents of a two year old son. Now they will live happily ever after.

Clyde wanted to make sure that we understood that his courtship and marriage was far from the norm, so he told us how most parents begin “shopping” their twenty year old sons and eighteen year old daughters. Often they will hire a broker who will undertake the duty of advertising the boy or girl. Arrangements will be made for the boy to visit the home of the girl. He will watch her walk and talk. He will carefully note her arms and legs and face. If he likes what he sees, he will eat a proffered sweet. If she finds him to her liking, negotiations will commence between the parents to set the dowry and come to terms on religion and other important details. With all that little stuff ironed out, the girl will begin planning the wedding of her dreams. Clyde says that sometimes a boy will meet with forty to fifty girls before he finds the stuff dreams are made of.

That crazy Clyde had us rolling in the aisle of the bus with a story about a friend of his. Seems this friend had met many a girl, yet no one was up to snuff for Clyde’s friend. Finally, one day he met a girl that he liked and he ate the sweet snack offered. Within a short period of time, Clyde’s friend was a married man. After he and the girl were married, she confessed that she had met a boy the day before he came and that an offer had been made by that boy. She and her parents deliberated fervently, unsure which boy she should marry. With all things being fairly equal, it seems that it came down to that age old real estate rule: location, location, location. Turns out that the first suitor lived a full kilometer from the bus stop. As good fortune would have it, Clyde’s buddy lived less than a half of a kilometer from the bus stop which sealed the deal. Clyde’s friend and his wife are now living the dream in bus stop nirvana.