The lovely islands of the Seychelles are in the rear view mirror. We are on course to make landfall again in a few days in the Maldives. We stopped at only three of the 115 islands, but I think it safe to say that this place is Garden-of-Eden beautiful. In fact, one of the islands is named Eden. Forty or so of the islands are granite; the remaining are coral atolls. The island of Aldabra is the world’s largest coral atoll. The islands get about six feet of rainfall each year, which is why they are so lush and green. Seriously, this is a jungle that would make Tarzan proud.

In all of the Seychelles, the island of Praslin is the second in size and also in population. The king of the jungle on the island of Praslin is the Coco-de-Mer. This palm tree grows profusely in the Vallee de Mai on this island. The Coco-de-Mer produces the largest seed known in the world. If one of these double-lobed coconuts falls from the tree and lands on your head, you will probably not leave the Seychelles vertically. You will leave in a box. Each of these massive nuts weigh between 33 to 70 pounds. The male of the species towers over the rest of the flora in the valley. The tallest ever recorded was 186 feet tall. The fronds are massive in size; they can measure at least six feet across. These trees reach maturity at fifteen and twenty five years and can easily live to the ripe old age of 200 to 300 years. The fruit of this coconut is on island time. It takes its sweet time maturing–six to seven years. It’s not difficult to distinguish between the mature male and female trees once you know what the parts look like. The locals use the image of the coconut in jewelry and all sorts of souvenirs. It looks like a big round human derriere and not at all something that I want to wear reproduced in gold around my neck or dangling from my earlobes. This tree is their claim to fame and they are rather proud of it.

We were lucky to see a pair of the rare black parrots while on Praslin. We also saw the fruit-bat in flight.  This is a rather large bat that eats fruit, hence the name. Reportedly, it has the face of a fox. The locals love to do a fruit-bat curry, which, thankfully, we were not served. We also saw a couple of geckos; one was bright green and the other reportedly has bronze eyes, but I wasn’t about to get close enough to verify that assertion. Reptiles are best observed from afar. The first picture below is the black parrot. Also pictured below is the green gecko and a picture of the bronze-eyed gecko on the male part of the male Coco-de-Mer Palm. That little flower smells like popcorn or basmati rice. That gecko is going to pollinate the female fruit. 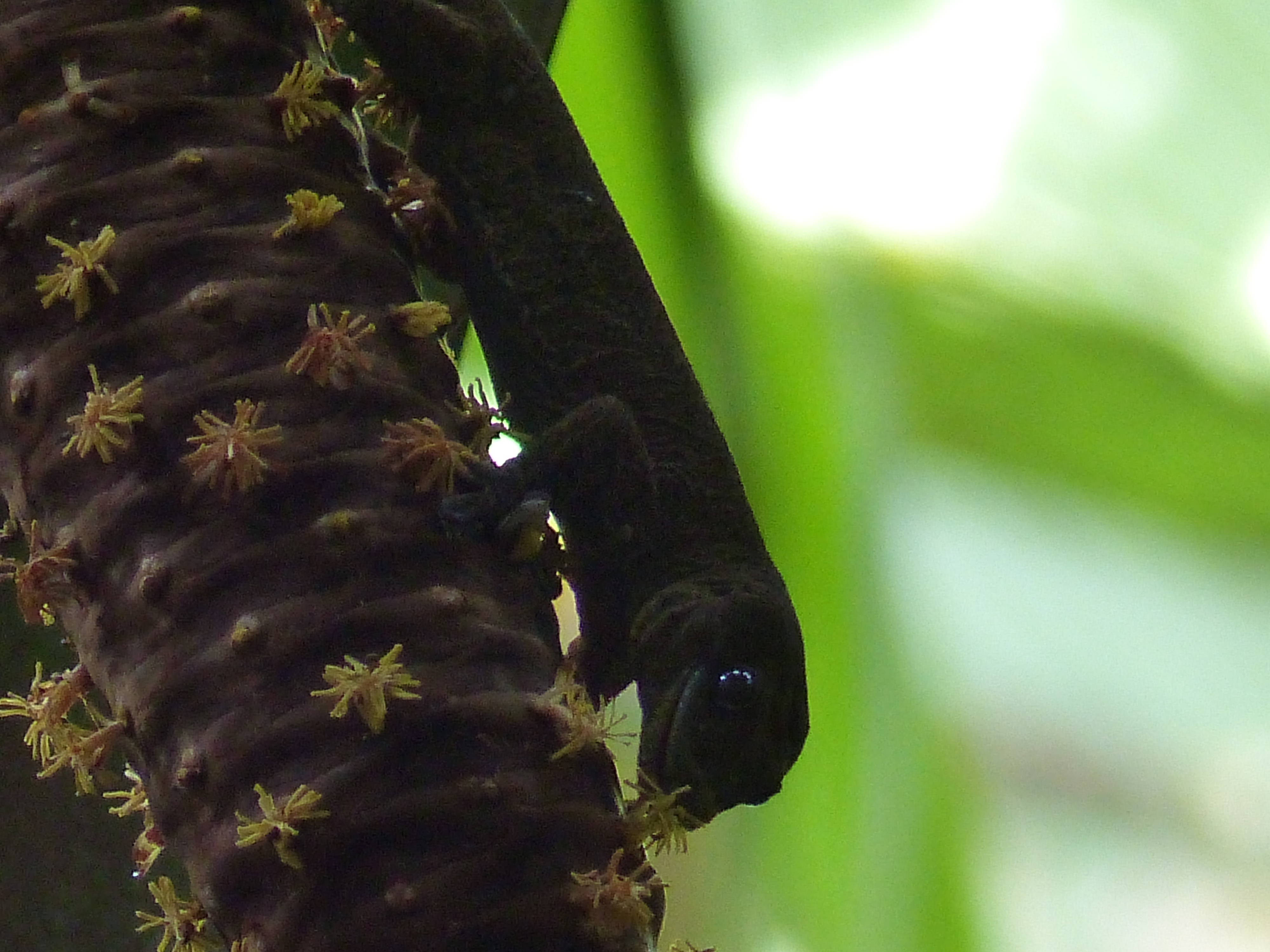 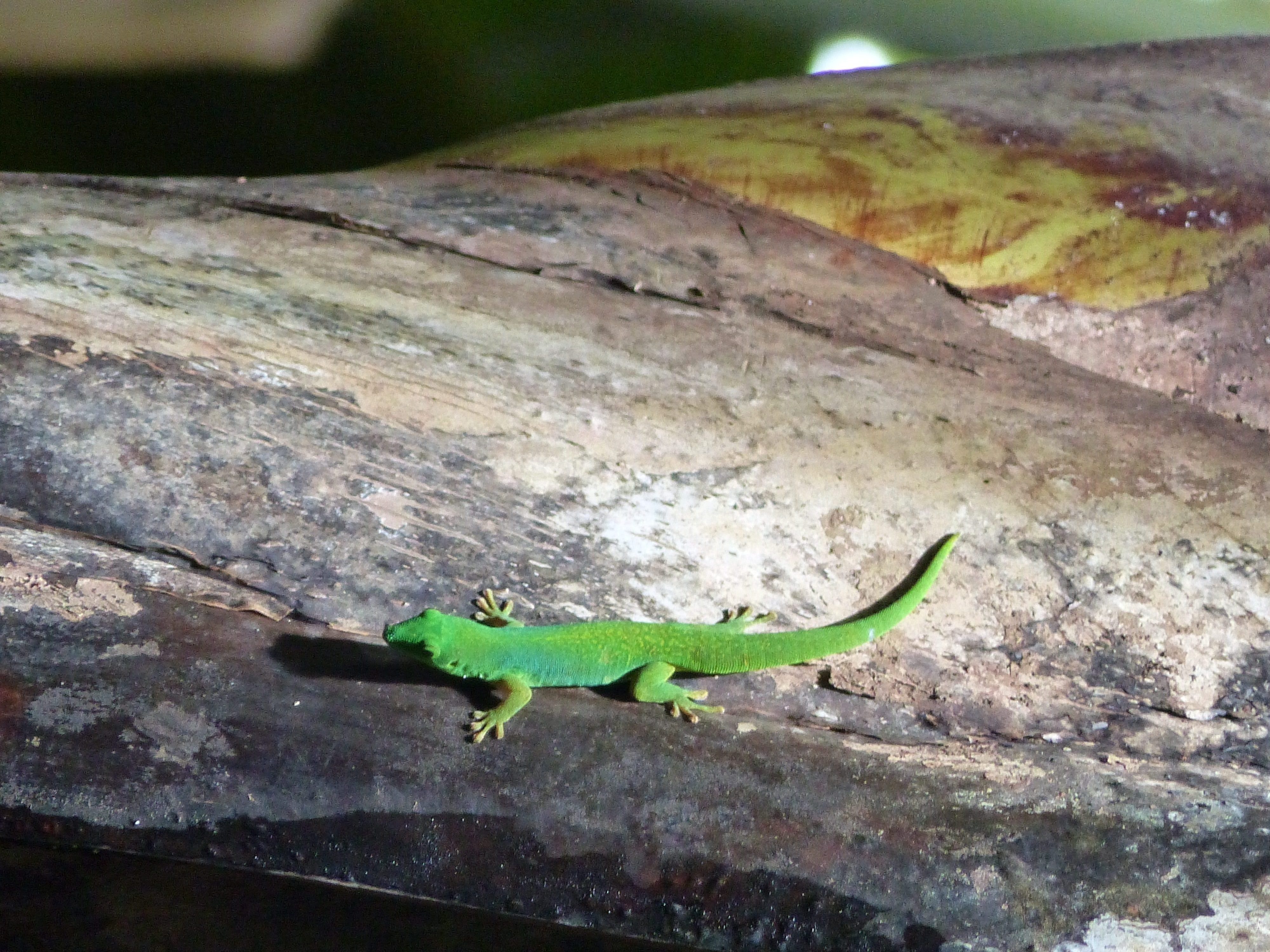 We spent a day on the island of La Digue. This is a small island. Bikes are the primary mode of transportation. There are only five large motorized passenger vehicles on the island and they do whatever is called for. There are some taxis, but for moving groups of people, you will need to get one of these trucks with bench seats along the sides in the back. So, if the trucks are picking up school children, you will just have to chill until they offload the kids and come get you. Whatever the need, these trucks do it all and if you have to wait, so be it. However, the king of this jungle island is the giant tortoises. They are confined to a specific area. OK, I will say it although it sounds cruel and harsh: They live in a big pen, although I understand that there is a remote island where there are thousands of these tortoises and they roam freely. Apparently, they eat anything and everything green and smash anything in their path, so it is thought to be best to contain them lest they destroy the island. Much like the elephants in Africa, they are cool to have around to attract tourists, but can make the biggest mess! While we were there, two of them decided to make baby giant tortoises. Everything on these islands seems to be fertile and ready to reproduce at any second. Every tree, bush, plant, and vine was laden with flowers or fruit or nuts. I wish I had asked what the birth rate is among the island’s human residents. Sex is in the air in the Seychelles.

Our last day in the Seychelles was beautiful and we spent the afternoon on and in the water. We glided across the water on a catamaran to the St. Ane Marine Park. There we had plenty of time for swimming, snorkeling, and/or lazing on a beautiful beach. Without a doubt, the king of the underwater jungle in the Seychelles is coral. The garden of coral was quite a sight to behold. The amount and variety of coral we saw while snorkeling was astonishing. The Seychellois apparently figured out early on that they have an underwater treasure that needs to be protected and are viligant in doing so. The reefs look healthy and vibrant and there were many beautiful fish as well as eels, stingrays, and even a sea turtle.

So, off we go to see what awaits us in the Maldives. Again we will cross the equator. I hope we can see it this time, but Captain Magnus has already warned us not to expect a Crossing the Line Ceremony. He says he’s not kissing that fish again.