Sri Lanka, formerly known as Ceylon, has had a checkered past with all the foreign invasions over the centuries, not to mention the internal strife and civil war resulting from disagreements between the major ethnic group, the Sinhalese, and the next largest ethnic group, the Tamils. They changed the name to Sri Lanka in 1972 in an effort to appease the Tamils, but a long, violent civil war could not be avoided and did not end until 2009 when the Tamil Tigers were crushed by government forces. If all that was not bad enough, Sri Lanka was one of the nations worst hit when the tsunami of Boxing Day, 2004 struck. And this was not the nation’s first devastating tsunami.

Colombo is the capital of the country and major port. Today, a visitor could come away clueless to the turbulent history of Sri Lanka. We’ve had two days in the island nation’s capital city and are amazed by all the energy and progress. While you can see reminders of the influence of the  Portuguese, the Dutch, and the British all over the city, it feels very much like India in many ways. This is probably due to the fact that it was once connected by a land bridge to India, bringing many immigrants as well as invaders over the centuries.

On Monday, we visited the temple of Kelaniya, one of the most sacred sites in Sri Lanka. Preparations were underway for Poya, a Buddhist holiday that occurs during full moons. Yesterday, we took an incredible walk around old Colombo with a native Dutch Burgher by the name of Mark Forbes. Mark has a deep interest in photography as well as architecture. (How he hates tall buildings!) Mark is thrilled that it is no longer possible to tear down old buildings and loves to showcase renovated structures.

I thought it might be nice to post some pictures from Colombo, so I hope you enjoy!

From the Buddhist Temple of Kelaniya

There are 150 Buddhist monks in residence at the Kelaniya Temple

From the Colombo City Walk 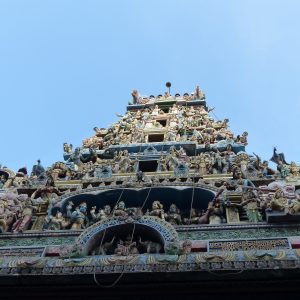 A Muslim Mosque and a Hindu Temple

Garlic seller at the Pettah Market. This open market has been operating since the times of Arab traders.