Rick’s sweet Aunt Sara was tending to pots on the stove and I was nearby watching all the flurry of activity that took place when the Spearman ladies prepared Sunday dinner. Aunt Sara smiled and told me that I needed to know that my new husband was a huge fan of rice. “I’ll never forget when Ricky was a little fellow. He asked me to please please cook lots of rice.” According to Aunt Sara, little Ricky said, “I want millions of rice.” I heard that story many times over the years. Rick’s aunts loved to tell it and loved to cook rice for him every time they prepared a meal for us.

Nowadays, he doesn’t eat millions of rice, but he does still enjoy it. We both grew up thinking that there was only one type of rice: white, served with gravy. Now our pantry is stocked with many different types and I have no idea how long it has been since I made gravy, but I’m betting it has been decades. I guess that’s why he was intrigued by the ship’s plan to hold a Rijsttafel dinner. I think he signed up the minute he read about it and I went to work to find out just what to expect at a Rijsttafel dinner.

For a couple of centuries before Indonesia was actually given that name around 1880, the Dutch pretty much ran the show in that part of the world. The fine folks from the Netherlands were world class businessmen. They colonized the area and called their new home the Dutch East Indies. They proceeded to exploit the islands for spices and whatever else would turn a profit back home in Amsterdam. The hot, humid climate rendered the islands pretty much a men-only duty station. The fairer sex from the more northern motherland found the area unpleasant, to say the least, although some women and families did take up residence towards the end of that era when the opening of the Suez Canal made the trip a little less onerous.  Meanwhile, without momma’s home cooking, the menfolk from the Netherlands ate the local cuisine. The colonists grew accustomed to it and when the Dutch left, they took their affinity for Indonesian cuisine home to Holland. 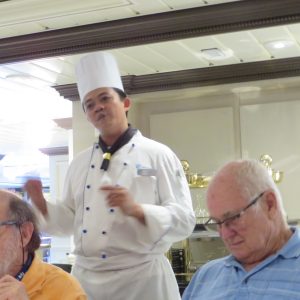 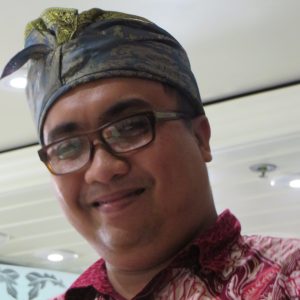 Today you will find Rijsttafel restaurants in Holland, but chances are, you won’t find many in Indonesia. That’s because the Indonesians would not cook such extravagant meals at home, but apparently the Dutch get a kick out of them. A Rijsttafel, or Indonesian Rice Table, is a no-holes-barred feeding frenzy, so we jumped at the chance to partake in this dining experience because we could try a variety of dishes from Indonesia. There are plenty of Indonesians in the galleys around this ship and they like to share their native cuisine. Rijsttafel dinners usually include dishes from all over Indonesia. The Rijsttafel we attended included a soup, eight mains, six side dishes, assorted condiments, and four desserts. We dined with a pair of Brits and a couple from Australia, so it was a convivial experience all around. Needless to say, nobody left hungry. 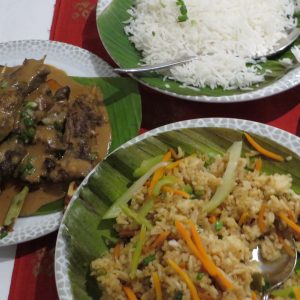 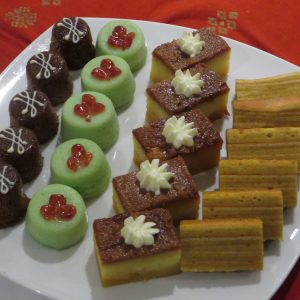 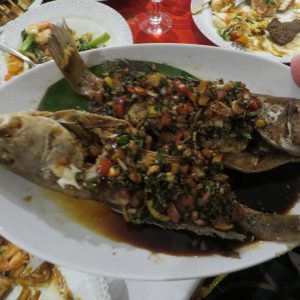 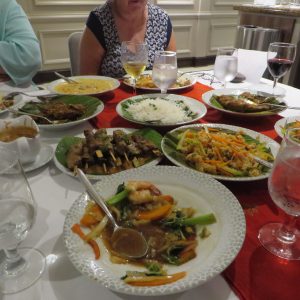