Yesterday was a long, emotional day. First, the three of us traveled with the Americans on the river cruise from the ship’s dock to Utah Beach. There were different itineraries to choose from for folks from other countries. For example, the Canadians headed off to Juno Beach.

Anyway, back to Utah Beach. I think that initially the main objective for me was to avoid a total meltdown, but I found that I was just so overwhelmed by many thoughts and emotions and my reaction was more subdued than I had anticipated. Next, we drove to Pointe du Hoc where the cliffs were so steep and high that it was totally impossible to imagine that anyone even tried to climb them, especially when being shot at and witnessing your friends fall all around you. From there, we made a stop in the little town of Sainte-Mere-Eglise, followed by a stop at the top of the cliffs above Omaha Beach and the American Cemetery. The American Cemetery was a strangely beautiful place. I hate having to admit that, for some reason, it was truly beautiful, but I think it was beautiful because it felt so peaceful. More on that stop later. Our final stop of the day was down on the beach now known as Omaha Beach. Since it was Bastille Day, or 14 July as the French call it, the beach was crowded with happy couples and families, cafes were hopping, homes were filled with partying groups of French friends and families. As we stood on the beach, a bugle played our national anthem and we sang in unison, hands over our hearts, Old Glory waving above. Then, the bugler played a beautiful melancholy rendition of Taps. The little ceremony concluded with one of the French guides reading a letter that she wrote years ago to a veteran whose son had told her the story of his father’s D-Day experience. Essentially, she wanted to thank this veteran and his fellow soldiers for liberating her family, her country, and Europe. Many of her fellow French citizens stood quietly as we observed our moment of silence. I think for many of us and also for them, it’s obvious that they can celebrate 14 July there on the beach because their freedom was made possible by the Allied forces.

We saw many bunkers and pillboxes and alot of rusted barbed wire. We saw what evil can accomplish. But, at the end of the day, we drove away more proud than ever to be Americans, although I know that has been cool with some to travel the world stressing that there is nothing exceptional about our country. I don’t know how anyone can visit the beaches of Normandy and still hold that belief. Seriously, just go to Pointe du Hoc and look at those cliffs the Rangers scaled and tell me that Americans are not extraordinary. I will wait for that response. . . .

All through the day, there were stories of bravery and kindness. I loved the story of John Steele, the paratrooper from the 82nd Airborne who got hung up on a spire of the church in Sainte-Mere-Eglise. John fumbled for his knife to cut the ropes of his parachute, but he dropped it. The Germans shot at him, so he played dead. When they cut him down and found that he was very much alive, they took him prisoner, only to have him escape three days later. His story was featured in that old movie, The Longest Day, and the town loves him. Below is what you will see if you come to this little village and look up at the church. Following that picture are a few from the inside of this beautiful little church. 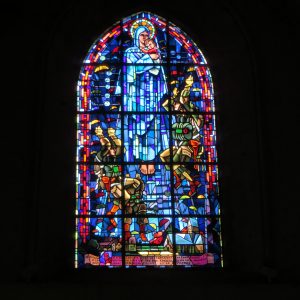 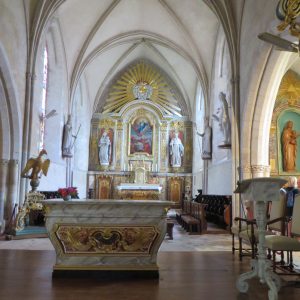 I will finish with a few pictures that, for us, sums up why we are here now. Apologies to our grandson, Logan, who was unaware that I was photographing him as he placed his white rose at the grave of a soldier from South Carolina. It is our duty as teachers, friends, parents, and grandparents to never let the sacrifices of so many Americans be forgotten. 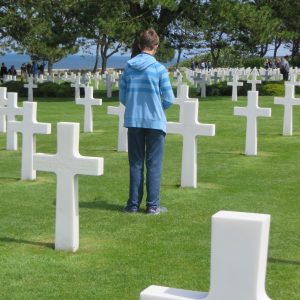 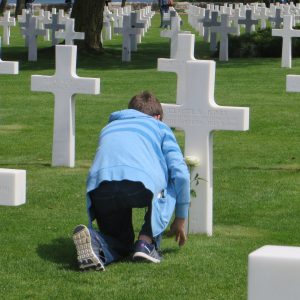 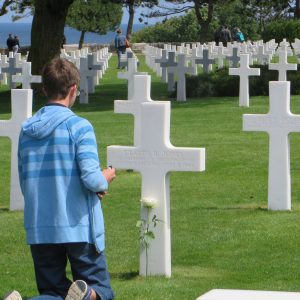 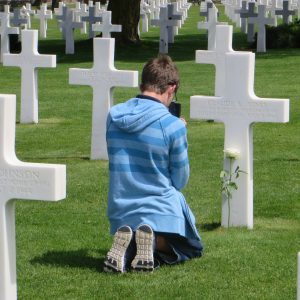