I hate being scared. I never watch fright flicks and never read thrillers. What is thrilling about being scared half to death? I’ve always said, tongue in cheek, that life is scary enough; I don’t consider it entertaining to be frightened. For that reason, I have never watched a scary movie; I am sure that I could not pick out Freddie Kruger in a police line-up. I have seen snippets of The Shining, and boy, oh, boy, that’s a scary movie. Jack Nicholson turns in a solid preformance as one crazy dude. Think about some of his other roles, and you will see a pattern developing here. He’s a great crazy guy.

The setting for The Shining was perfect for scaring the wits out of horror movie buffs. That is why, when we strolled into the lobby of the Majestic Yosemite Hotel Sunday afternoon, a shiver ran down my spine. You see, the interiors of this great old hotel were adapted for that 1980 horror classic.

It turns out that this hotel has had a long and storied past, and being used as a movie set is only a small part of that past. When the doors were opened for the first guests in 1927, the hotel was named the Ahwahnee Hotel. (It was renamed just last year due to some legal dispute.) Ahwahnee was originally chosen as the name because that was what Yosemite Valley was called by its first residents, the Ahwahneechee Native Americans. 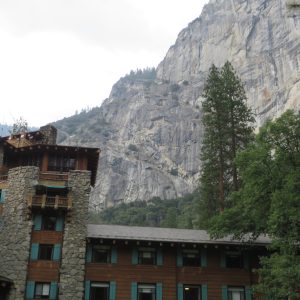 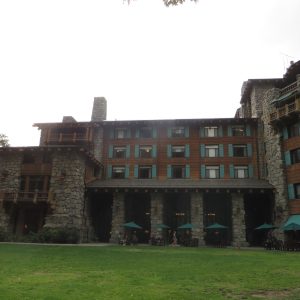 Stephen Mather, the first director of the National Park Service, loved Yosemite above all the federally protected parks. He wanted to build a grand hotel that would attract people of wealth and influence so that they would spread the word about the national parks. The Mural Room has writing desks in two corners. These were intended for use by famous guests to write glowing reports about the park, enticing others to visit throughout the year. These desks have be utilized by several presidents of the USA as well as folks from over one hundred different countries. Steve Jobs was married in the Mural Room. Below are a few pictures from this room. 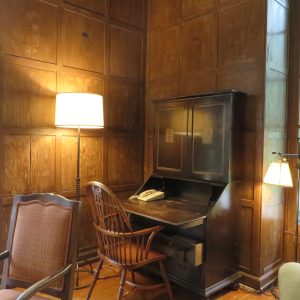 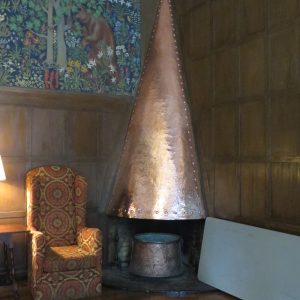 The architect who designed the hotel, Gilbert Stanley Underwood, was no stranger to grand hotels in national parks. In fact, his park hotel style became known as “parkitecture.” It took thirteen months to build this grand hotel. The 5,000 tons of stone used here had to be quarried about one hundred miles away and brought to the site because, since this land is federally protected, it was forbidden to take the stone from the park. Honestly, I don’t think anyone would have noticed if they had used the granite right here. There is certainly no shortage of rock at Yosemite. The cost of the hotel was to be no more than $525,000, but it came in grossly over budget at $1,250,000.

The interiors pay homage to twenty four different countries on four continents. Many of the original rugs now hang on the walls; they decided that the rugs were too valuable to trample. The Great Lounge is furnished today as it was when the doors opened in 1927; ninety percent of the furnishings are original. The Ahwahnee was used as a naval hospital in World War II.  The Great Lounge was converted to a dormitory for 350 men and the Sweet Shop was pressed into service as the commissary. When the troops marched out, the Great Lounge has to be painted to get rid of the cigar smell, blotting out all the stencil painting that will cost millions to restore if and when they can come up with the cash to do so.

Each December, the dining room is transformed into a historic English-style hall as the hotel hosts the Bracebridge Dinner. It was conceived as a way to draw people into the park during the winter. Nowadays, this is a highly coveted ticket and scoring one doesn’t come cheap or easy. The dinner consists of seven courses and spans four hours. Coincidentally, at the wedding we attended outside of Walnut Creek prior to our arrival at Yosemite, we dined with a family of native Californians. The matriarch, who is probably ten years older than me, said that her grandparents had attended the Bracebridge Dinner in its early years and she remembers how they raved about it. The inaugural dinner in 1927 featured a jester who entertained guests with his antics. When not performing at the Bracebridge dinner, he worked his day job as photographer. Ansel Adams is more famous today for his national park photography than he is for his role as court jester in the Bracebridge Dinner.

There is so much history to absorb at the Majestic Yosemite Hotel. It is truly a grand hotel, but every time we travel down the corridor to our room, I hear that frightful cry from The Shining– “murder” spelled backwards–REDRUM! REDRUM! REDRUM!