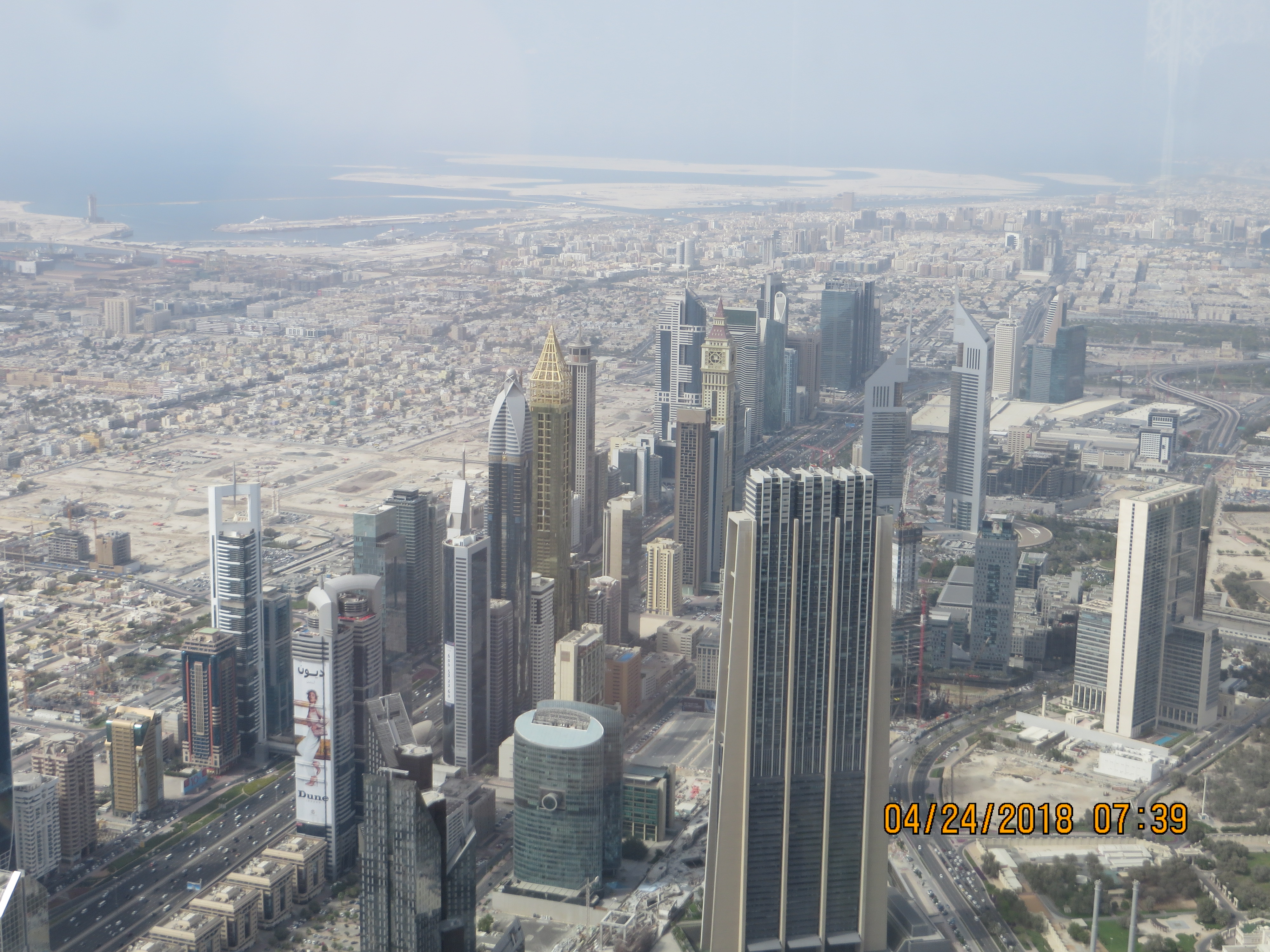 Dubai is a city like no other. Probably all first time visitors have the same reaction that we have had. Shock and awe pretty much sums up our reaction. Yesterday, we paid homage to all things over the top: tall buildings, massively expensive jewelry and cars, outrageous adventures, and designs in architecture that are way far out of the box. We gawked from one end of Dubai to the other. It was great fun, but as usual, we wanted to dig a bit deeper into the culture and history of the United Arab Emirates. So today was all about that. 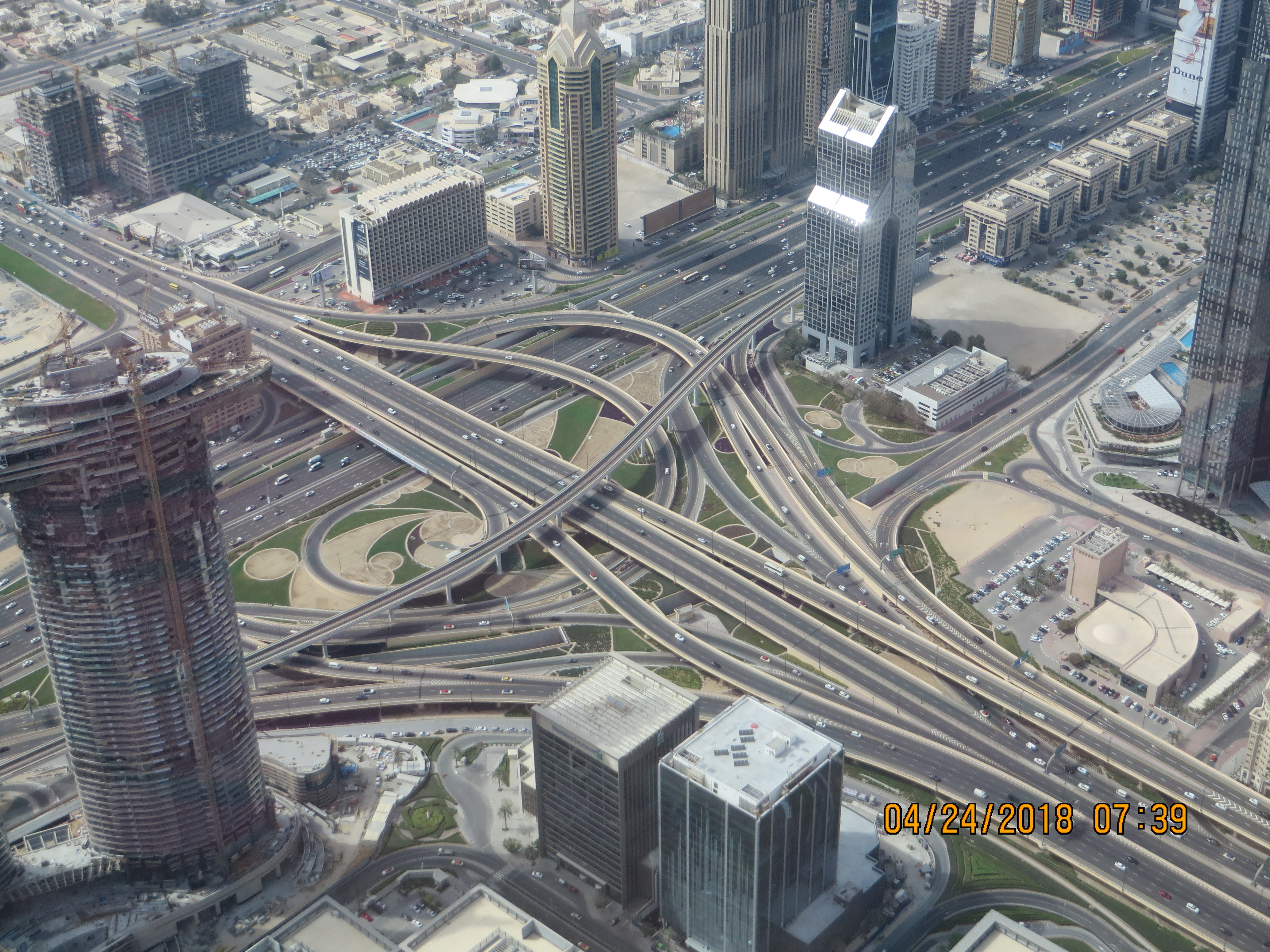 With good instructions and a bit of apprehension, we left the hotel headed for the tram station. At the tram station, we bought our day passes for the Metro and boarded the tram for the short ride to the Metro. Soon we were zooming across Dubai in total comfort. The Dubai Metro opened in 2010. It is cool, clean, and easy to use. I would like to say that my floors at home are as clean as the Dubai Metro floors, but I know someone who would promply report that I “lack candor.” (Honestly, I’d rather eat off the Dubai Metro floors than off my floors, but please, keep that to yourself.) The entire Metro system is spotless. It is crazy clean. As you can see below, we were not surprised to see “Mind the Gap” in English and in Arabic. 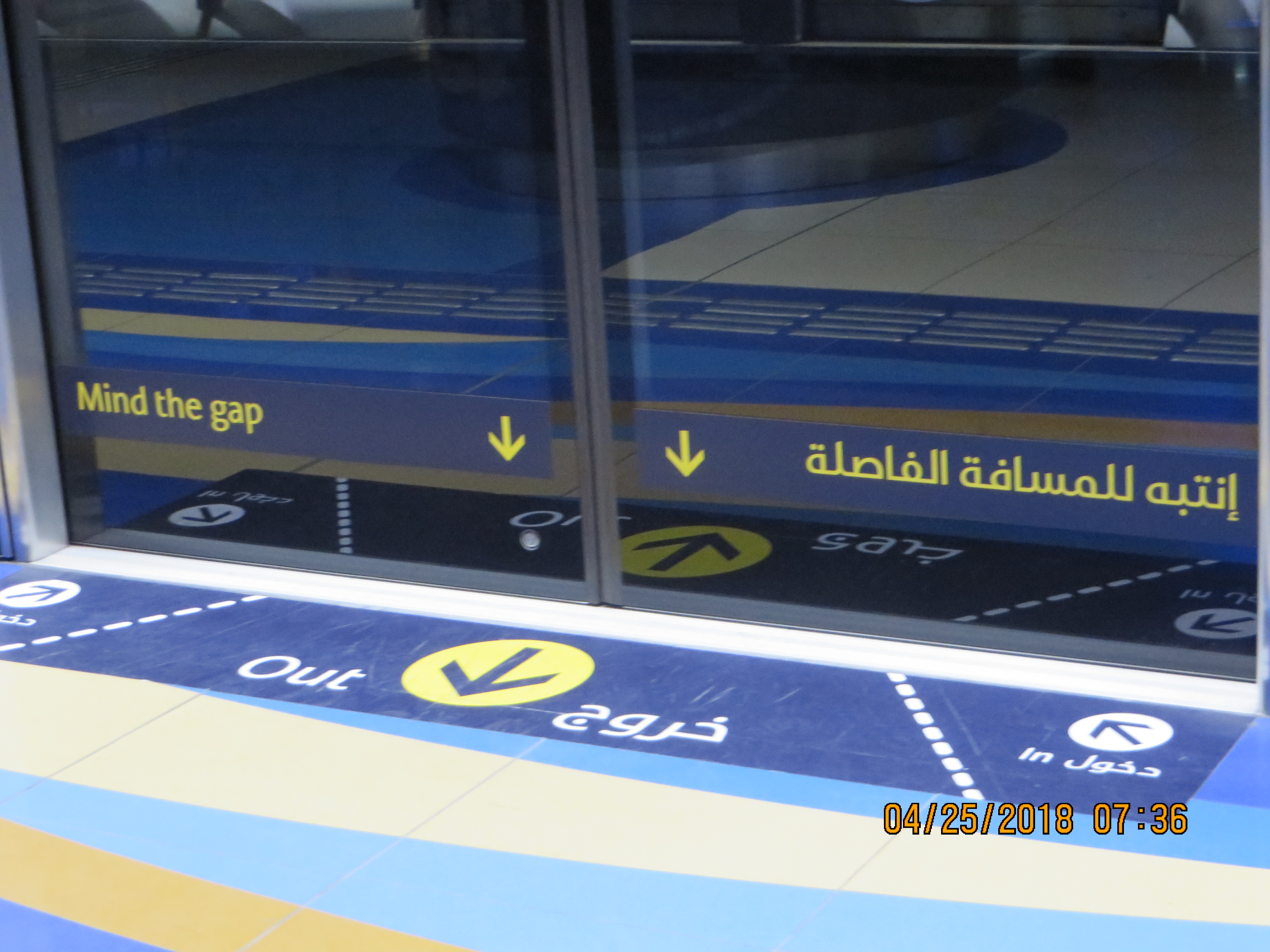 Our destination was the meeting point for our morning tour. We spent the morning with a delightful young lady named Nada. Nada’s company, Wander with Nada, strives to introduce visitors to old Dubai; she wants visitors to experience the souks, ride across the Dubai Creek in an old wooden boat called an abra, see off the beaten path museums like the Women’s Museum and the Coffee Museum, and eat lunch with locals. In a nutshell, days like today are why we travel. 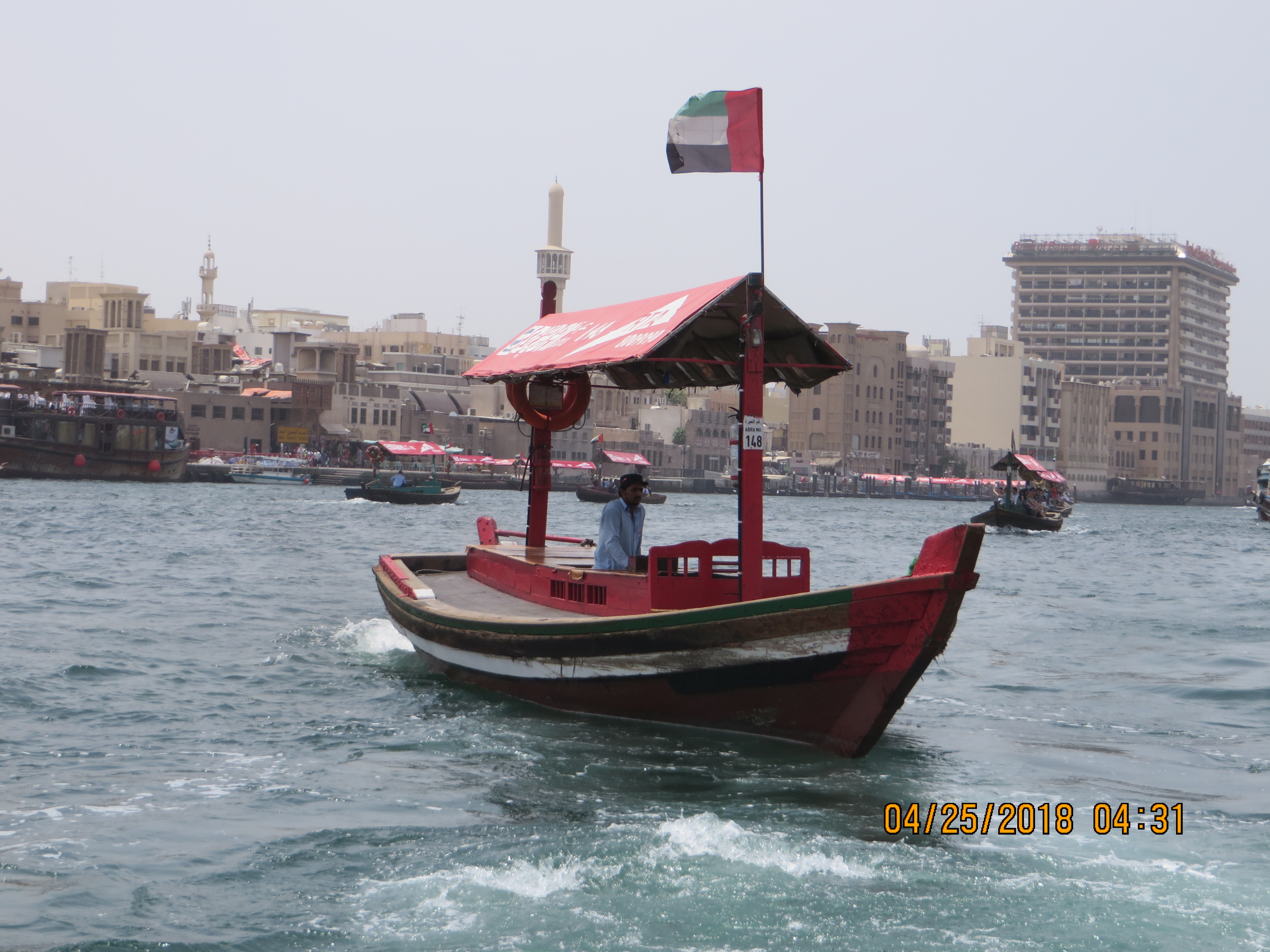 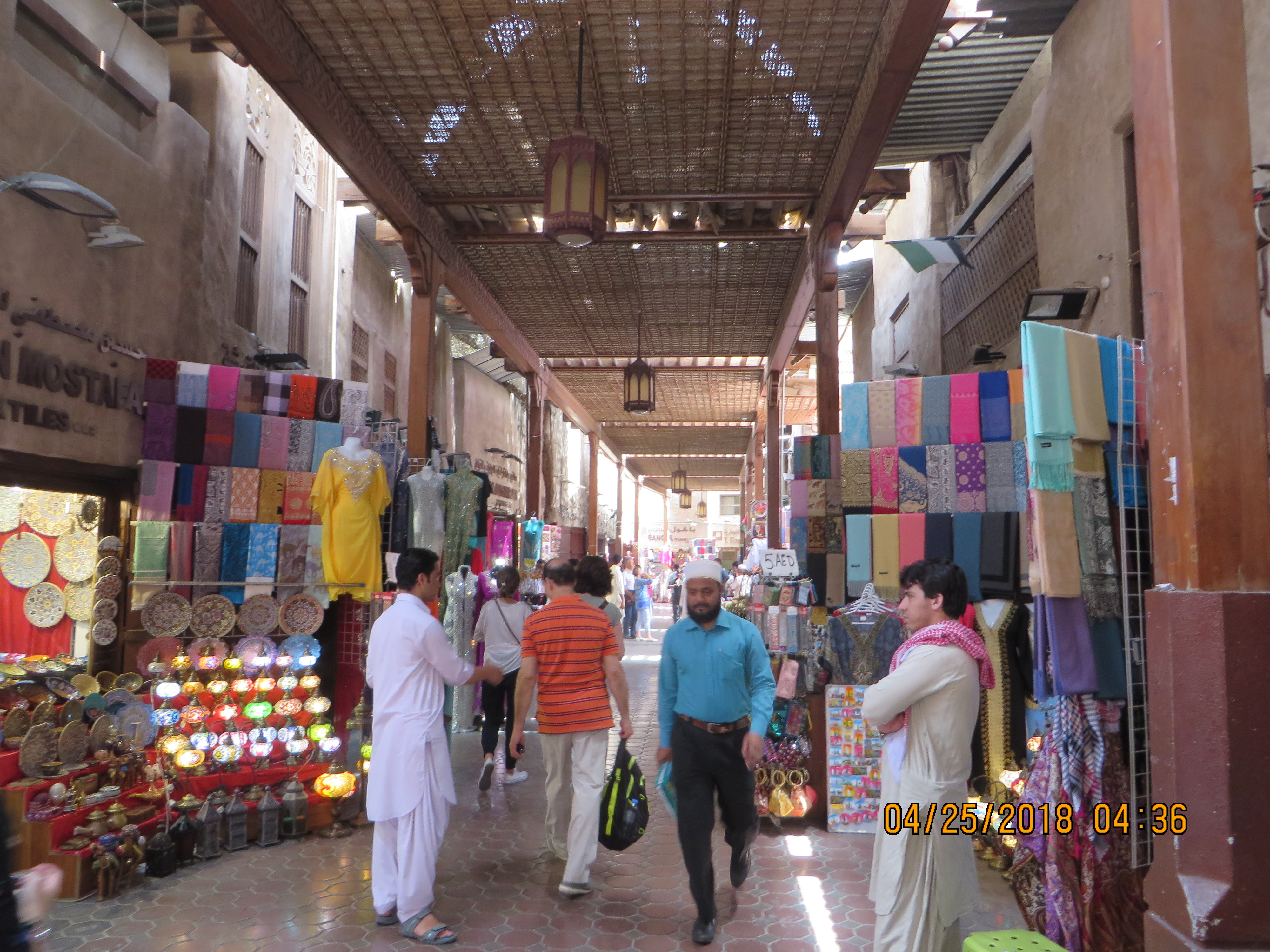 Nada gave us a crash course in all things United Arab Emirates. Some of the facts and figures were quite a shock to us. I will give you  a few examples. In Dubai, the population is seventy percent male and thirty percent female. Here is another interesting Dubai statistic: ninety-two percent of the residents are expats; only eight percent are Emirati. If you are an expat, don’t expect to become a citizen unless you are a woman who marries an Emirati man and has children with him. If you are an expat man and marry an Emirati woman, you will not become a citizen, nor will any children you have with that woman. Nada is Jordanian by birth and is in the UAE on a visa contingent upon her employment. Forget anchor babies, welfare, and all that stuff; it’s not happening here. We had already noticed an abundance of Indians, so we were not surprised when she told us that twenty-eight percent of the UAE population is Indian. In Dubai, we were told that Indians make up fifty-eight percent of the population.

The UAE is a young country. It was formed by the coming together of the seven emirates in 1971. Most people are familiar with the two largest emirates, Abu Dhabi and Dubai. I am not going to list the other five because most people don’t care and won’t remember. Abu Dhabi is the largest, is the capital, and has the most oil. The late Sheikh HH Zayed of Abu Dhabi and the late Sheikh HH Rashid of Dubai worked out the details. Sheikh Zayed (may he rest in peace) is considered the ”Father of the Nation” and was the first president. The sheikhs are royalty and pass the rule to a male in their family, usually a son or brother.

Nada took us to the small but excellent women’s museum. She explained the traditional dress, pointing out what dress is cultural and what is religious. She wanted to dispel the myth that women have no meaningful role in UAE society. In fact, the UAE was way ahead of other arab countries when it started formally educating girls in 1954. Presently, the thirty-one member UAE cabinet, which was formed in 1971, has nine women and Emirati women hold sixty-six percent of the public sector jobs in the country with thirty-three percent being in leadership positions.

We stopped in at the coffee museum for a cup of coffee made and served Arab style, which is not at all like the Turkish coffee that people often think is Arabic. Brewing and serving coffee is done according to a strict ritual and is served with an excellent Emirati date. Speaking of dates, did you know that, in the Palm Jumeirah, each frond is named after a different variety of Emirati date? The dates here are nothing like those things in the Dromedary date box many of our moms bought about once a year, usually for baking around the holidays. I do believe that a committed date hater would have a change of heart after sampling these Emirati dates. 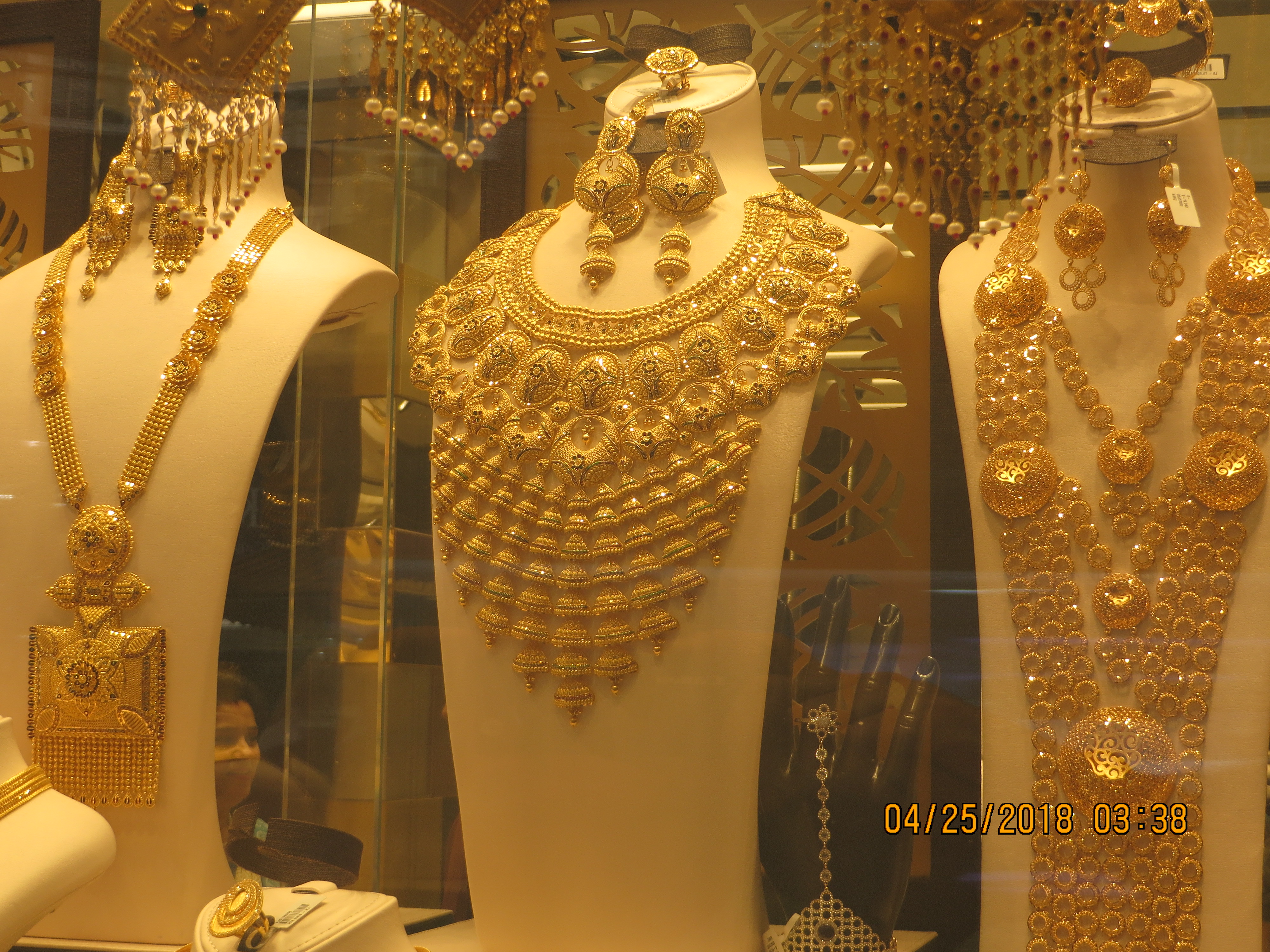 If you took a stroll through the gold souk, you would quickly figure out why Dubai is called the City of Gold. The gold there is beyond belief. I love gold, but dang, gaudy is the word that comes to mind here. The Indians, as well as the Chinese, love love love gold. The Indians come here to buy it because they pay no tax here. Truthfully, in reality, much of the gold is imported from India, so it’s Indian gold and Indian design minus Indian tax. So it is cheaper for the Indians to buy their gold here. Indian women do love their bling. The Chinese are coming here to buy gold as an investment. They make the Indians look so romantic, right?

Just a guess, but if you have not visited Dubai within the last ten years, you probably would not recognize it now. Likewise, just a  “heads up,” but the same holds true for the next decade. Gearing up for the World Expo 2020 is the big thing here right now. There will be 20 million visitors here, so if we came back, we probably would not recognize the place. Change is the name of the game here. One thing will remain the same: the City of Gold will continue to glitter brightly.