Nope. They did not bring burgers and fries, but they did bring bullets and firearms. They boarded the Azamara Journey today in Muscat, Oman and settled in for a cruise through the Gulf of Aden, but they aren’t on holiday. We won’t see them lounging by the pool swilling fruitiful drinks with little paper umbrellas in them. They are very easy to spot. They are younger than the average guest and in much better physical condition. They are retired Marines from the British Royal Navy and they are here to protect us. Rick was hoping to see some members of the Israeli Mossad here to guard us. He thinks they have more attitude. Nonetheless, we are glad to have these five guys onboard until May 3. The Gulf of Aden is not someplace you want to see “Gun-Free Zone” signs plastered all over the place. 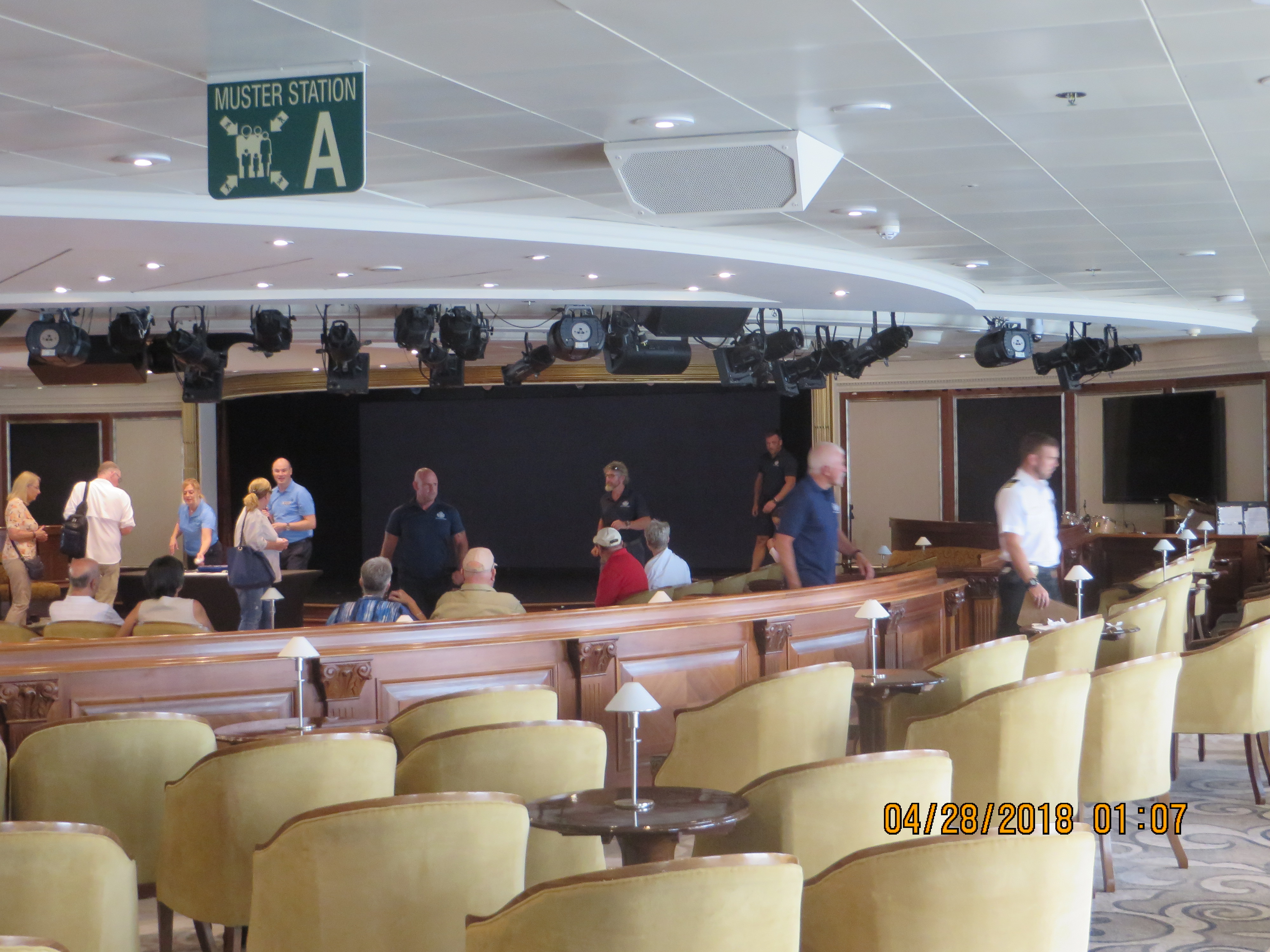 Not the best picture, but here are four of our five guys in navy shirts checking out the ship.

We’ve had alot of people ask us about security since we booked this cruise and it is a valid concern. After about five years of not having any hijackings in this body of water, there has been a definite uptick in pirate activity beginning in March of 2017. Our captain tells us that pirates have never hijacked a ship with armed guards. Also, because our ship sits higher in the water than a tanker, it is much harder for pirates to board. They just don’t have ladders to reach the deck. A ship such as the Journey is more nimble than the big tankers and also can run at faster speeds, which foils would-be pirates. But this does not mean that Azamara is complacent and does not have a protocol in place should pirates attempt to come aboard.

On Friday, we had a pirate drill. My first ever. The captain made an announcement using the code word “Operation Safe Haven” and sounded the ship’s horn. Guests were instructed to leave their cabins and stand in the hallway outside their door. At the time, Rick was away from our suite and had to return to be accounted for. Captain Tysse said that in the event of a real incident, we would need to move into the service corridors to get further away from windows, doors, and outside areas.

We were instructed to keep our balcony lights off and window curtains closed after dark. The ship will be running only essential navigational lights during this transit. Captain said he doesn’t want the ship to attract attention by sailing through the gulf “looking like a Christmas tree.” Also, some of the decks will be closed from sundown to sunrise. I am guessing that this is because the guards will be patrolling on those decks.

The Gulf of Aden is about three times the size of the Gulf of Mexico, so policing the area is difficult. Captain Tysse says that we will see alot of small fishing boats and that they often approach the ship out of curiosity. If this happens, he may weave from side to side to discourage them from getting too close, so we may notice the ship sailing rather erradically.

Rick said that, after the drill, when he went back to his bridge class, they observed a small boat heading directly for the ship. The bridge instructor panicked and nearly freaked out before it became obvious that the fishermen just wanted to sell fish to the ship. I checked the onboard movie selection. Captain Phillips, the 2013 Tom Hanks movie about the hijacking of the Maersk Alabama, isn’t available. Probably a good idea. I guess everyone is a little more on edge in these waters.

April 28 Evening Addendum: This is what Captain means by blocking out as much light as possible from the ship. Check out the cardboard cutouts on the windows. 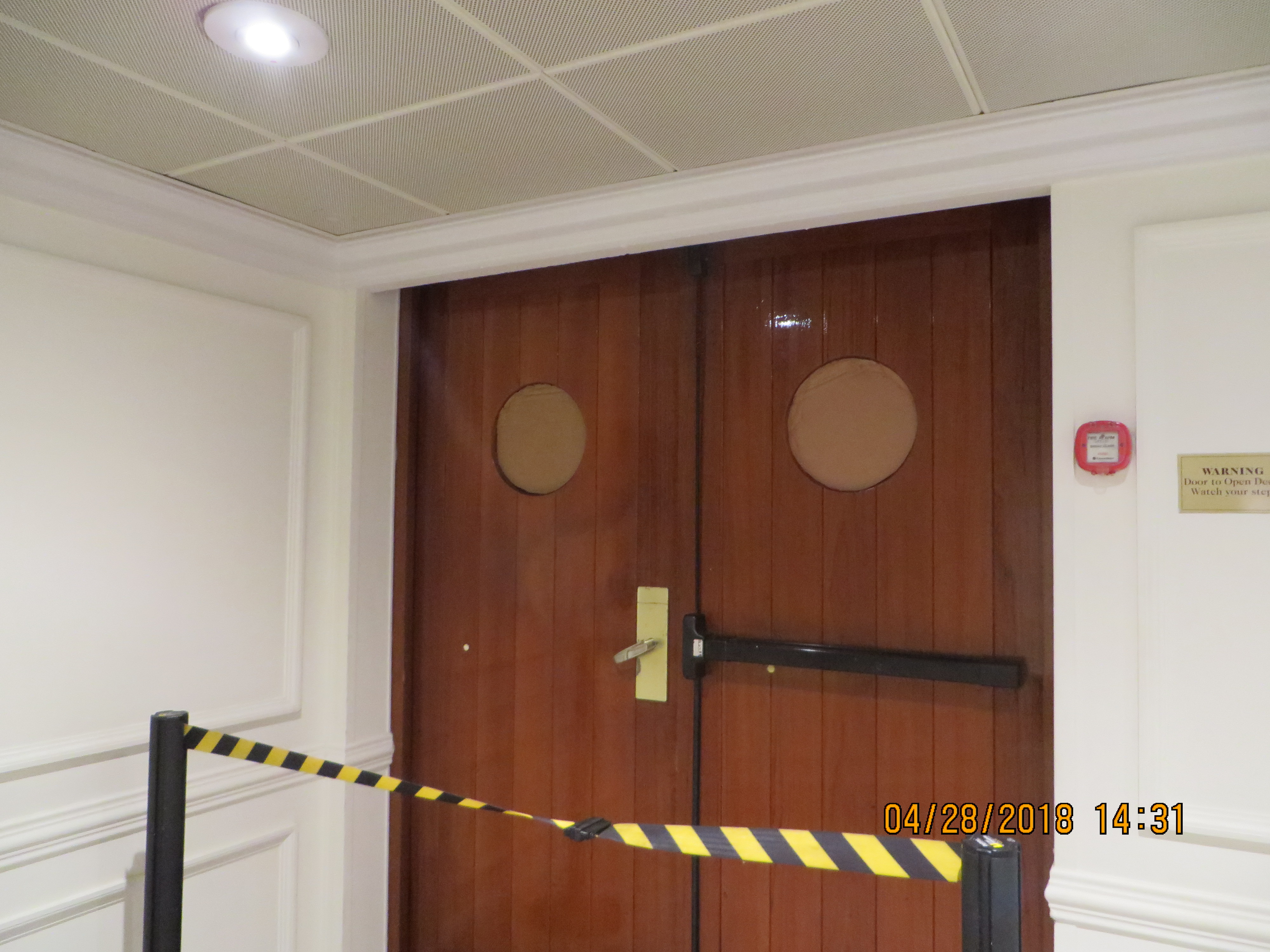 April 29  Mid-day Addendum: Captain says we are having perfect anti-pirate weather—breezy with a good bit of chop on the sea.

May 3 Evening Addendum: We have transited the dangerous waters and no longer have to keep lights off and curtains drawn. Azamara threw its huge traditional White Night party on the decks. Four of our five guys were hanging out in the smoking section much of the evening just relaxing. There was no shortage of women around them and I suspect these waters may be more treacherous for our guards than the waters of the Gulf of Aden and the Red Sea.