Oman: A Tale of Sultans and Bureaucrats

We have left Omani waters and are sailing in the Gulf of Aden headed for the Red Sea bound for Egypt. Our time in Oman was very enlightening. In Muscat, we got some insight into Omani culture and history. Salalah revealed another side of Oman.

In Arabic, Muscat means “between the mountains.”  The capital city of Oman is surrounded by bare, jagged mountains. It is very, very hot and the terrain is harsh beyond belief, but the city is quite lovely and its residents seem to enjoy a fairly good lifestyle, thanks to oil and Sultan Qaboos ibn Said al Said. The city is the cleanest city I have ever seen. You will find no trash on the roadsides and we were told that you could even be fined if your car is too dirty. No building can be taller than twelve stories. The sultan does not want the view of nature to be obstructed. However, he is fine with opulence when it come to his palaces. They are breathtaking in size and in adornment. He has at least two in Muscat and there are a total of seven palaces in the country. The miles and miles of wall around his incredibly massive palace estate outside of Muscat give the impression that he is fine with obstructing views of his lifestyle. 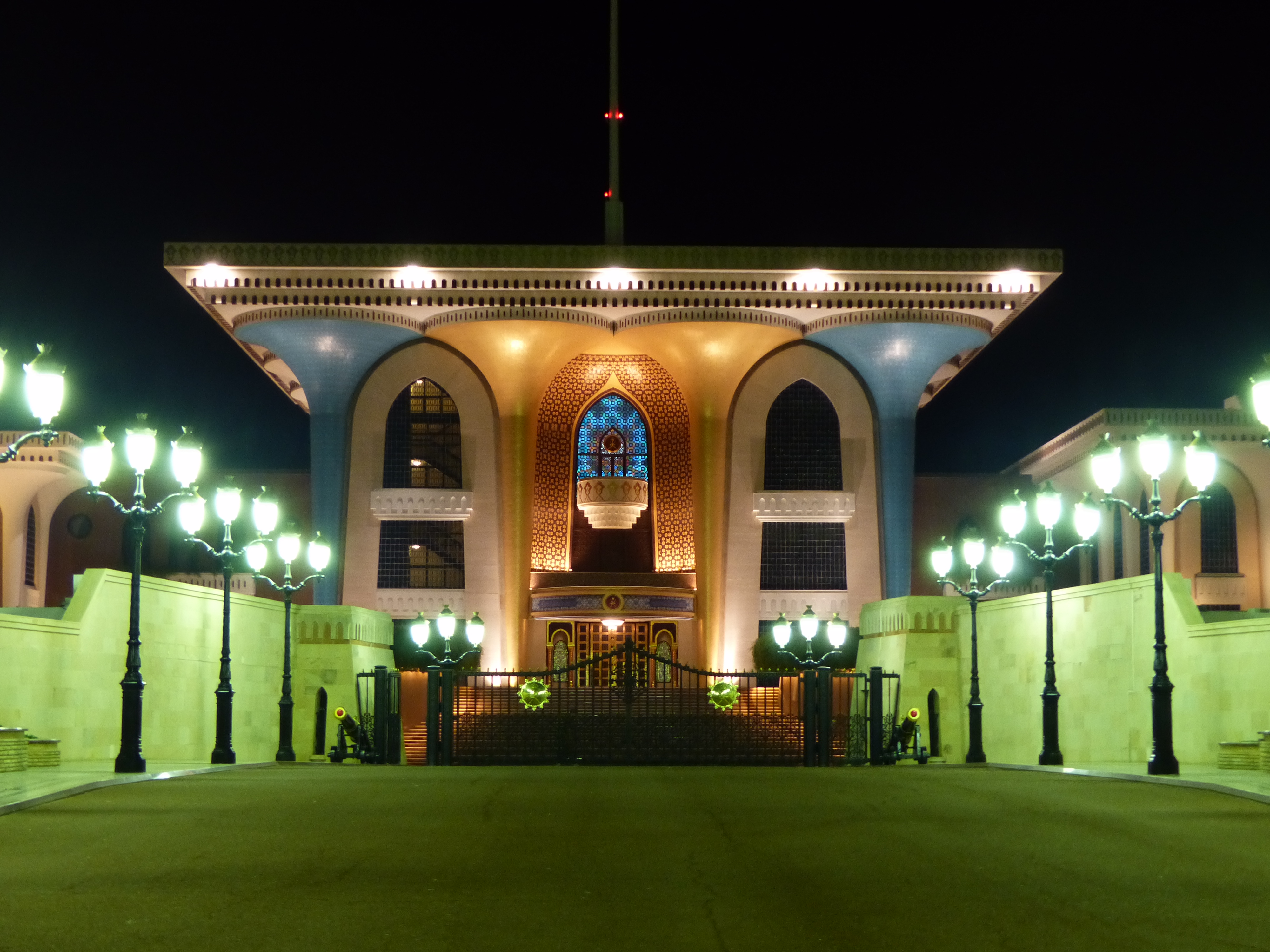 One of the buildings on the sultan’s in-town palace grounds. He never stays at that palace, but uses it for official business. He prefers living at another palace. 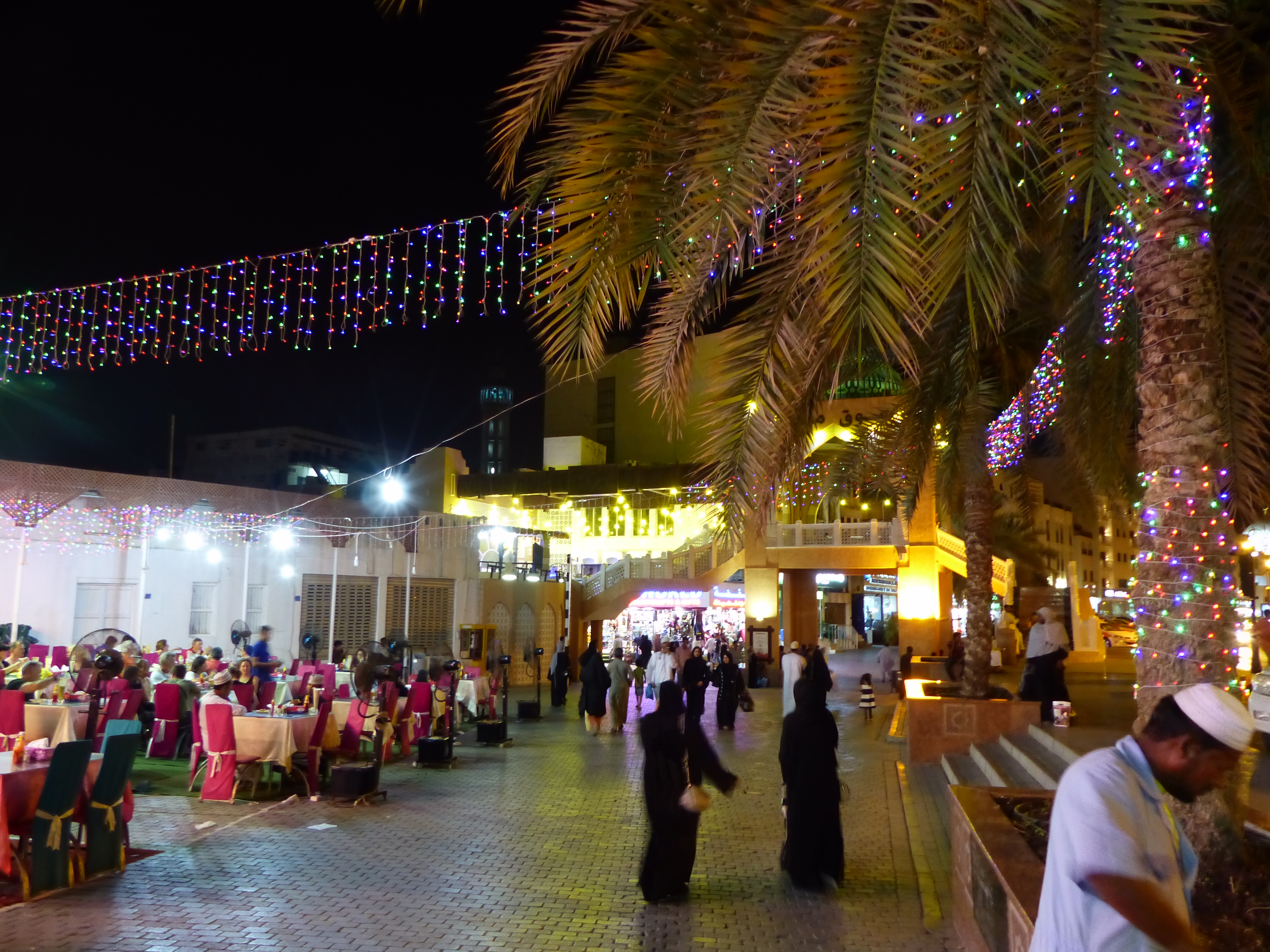 The story of Sultan Qaboos is so very interesting. Call this Family Feud, Omani style. His father was sultan before him. Sultan Qaboos was educated in England and India. He returned to Oman after he finished his schooling, but was essentially put under house arrest for several years by his father upon his return. In 1970, at the age of thirty and with the aid of Great Britain’s MI-6, the son took over as sultan in a bloodless coup. The elder sultan was sent to London and exiled to a suite at the Dorchester Hotel. Sultan Qaboos has ruled since that time. Currently, Sultan Qaboos is over seventy-seven years of age. It is thought that he has cancer. According to our local guide yesterday, his instructions as to who will succeed him are written in the “White Book” and will be revealed upon his death. Our guest lecturer on the ship from the University of London says that there is reason to believe that there will be much conflict when the sultan passes away and that the title of sultan may not be passed according to his wishes. 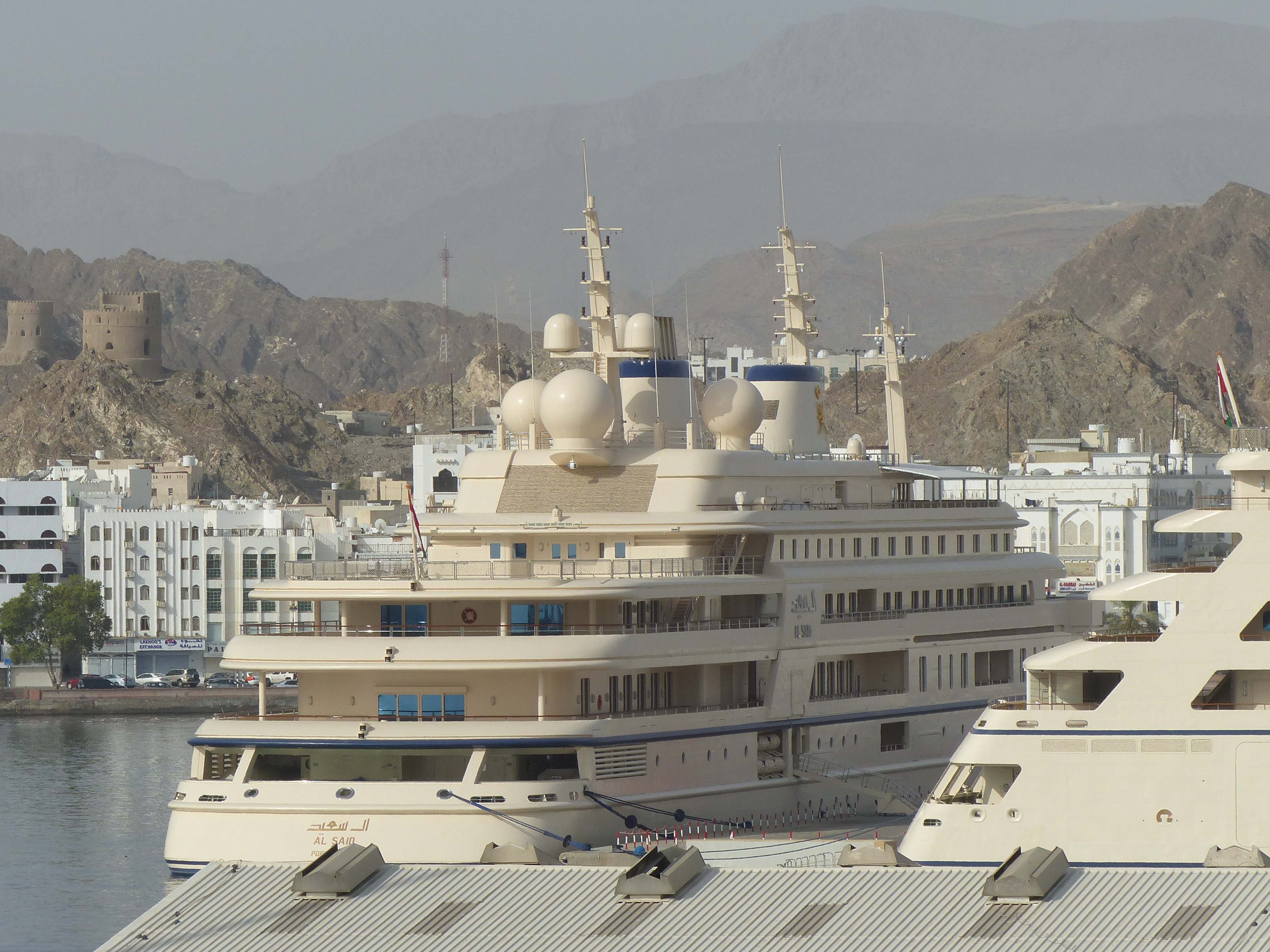 The smaller of the sultan’s two yachts.

At the time of the 1970 coup, there was no electrification in Oman and very few hospitals. Sultan Qaboos has made signifcant improvements in the infrastructure, medical and educational systems, and general quality of life. Presently, the life expectancy of an Omani man is 72 and that of an Omani woman is 76. Like many Arab countries, there are many expats who do much of the hard work in the country. In fact, Omanis make up only fifty five percent of the total population of the country. We purchased fabric from an Indian merchant in the souk in downtown Muscat. Many of the merchants there were Indian. As expats, they can never obtain citizenship, and if they lose their ability to provide for themselves through employment, they lose their visas and are sent packing back to their homeland. They are not able to take advantage of the free public education system. They have to pay for their children to attend private schools. About ninety-four percent of Omani citizens are Muslim. There are Sunni, Shia, and Ibadi. Ibadi Islam is the predominant sect here. 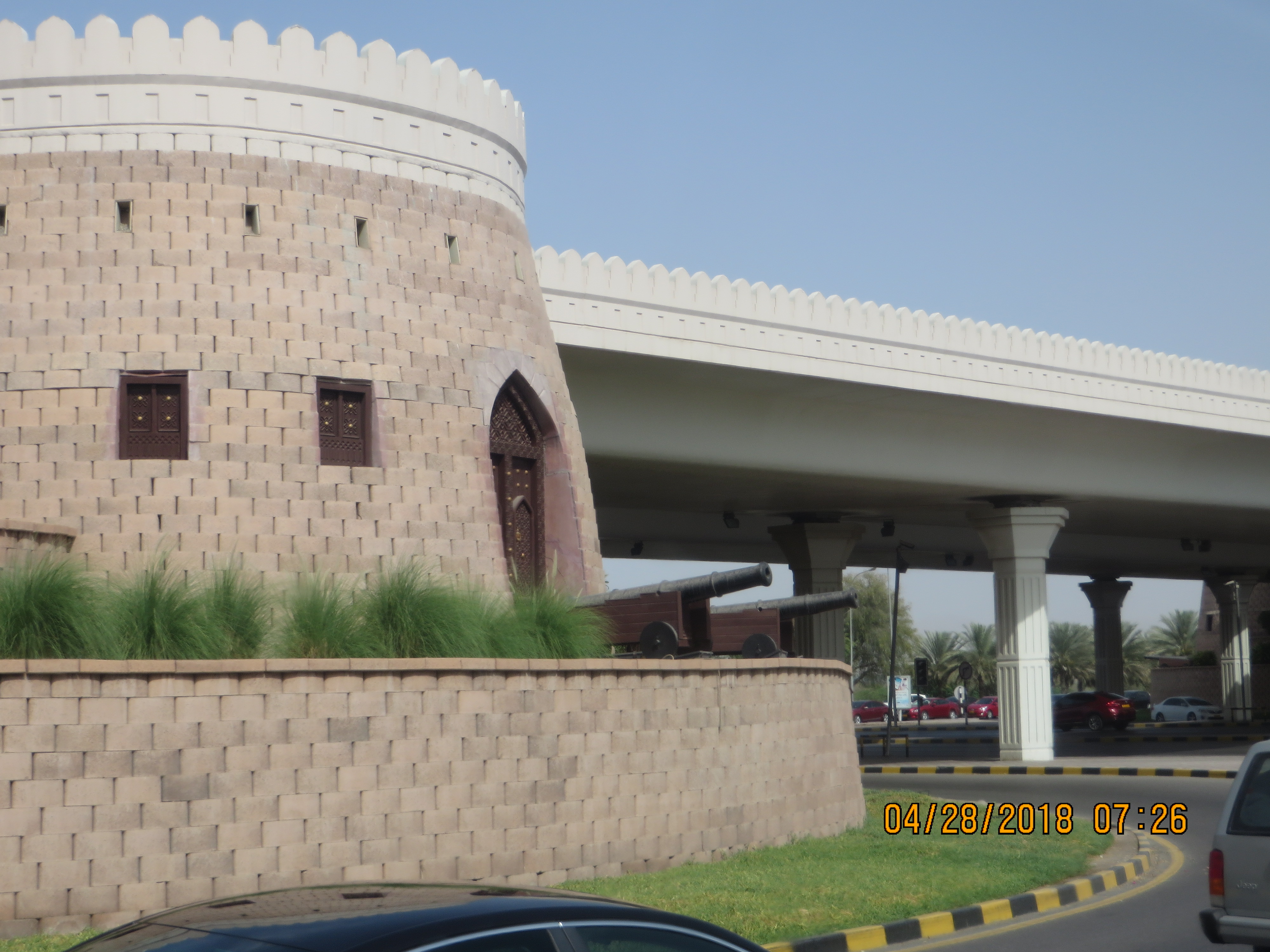 Intersections along the roads in and around Muscat can be quite elaborate.

Our local guide painted a picture of sunshine and lollipops, but Oman is not tolerant. Homosexual acts are illegal. Speaking ill of another person’s religion will get you a ten year prison sentence, so don’t go exercising those First Amendment rights in Oman. An Indian expat commits suicide exery six days in Oman. Life in Oman seems pretty sweet for Omani citizens who play by all the rules, but not so good for anyone who tries to go their own way. 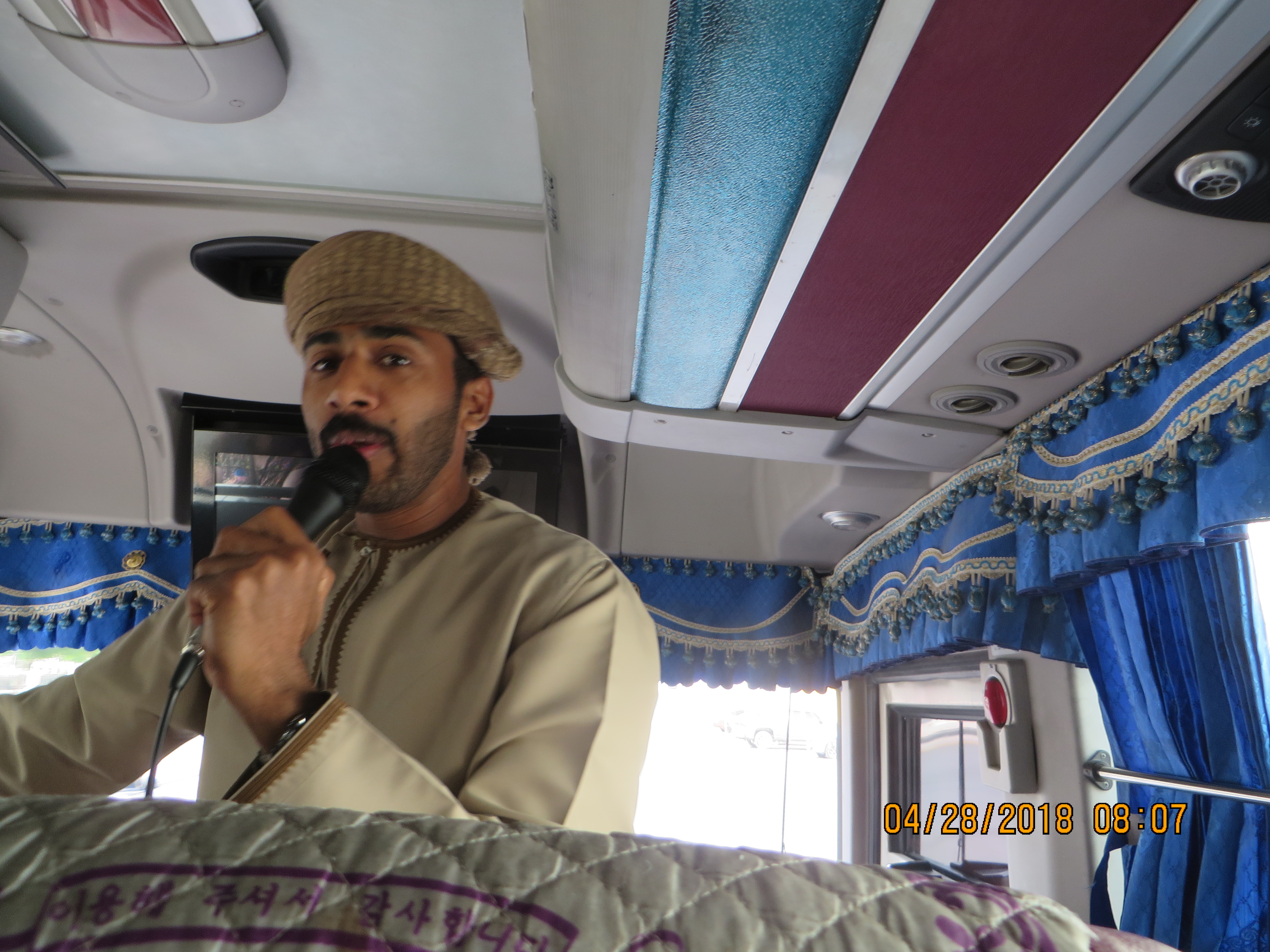 Our guide wearing a turban. He showed us how to wrap it. 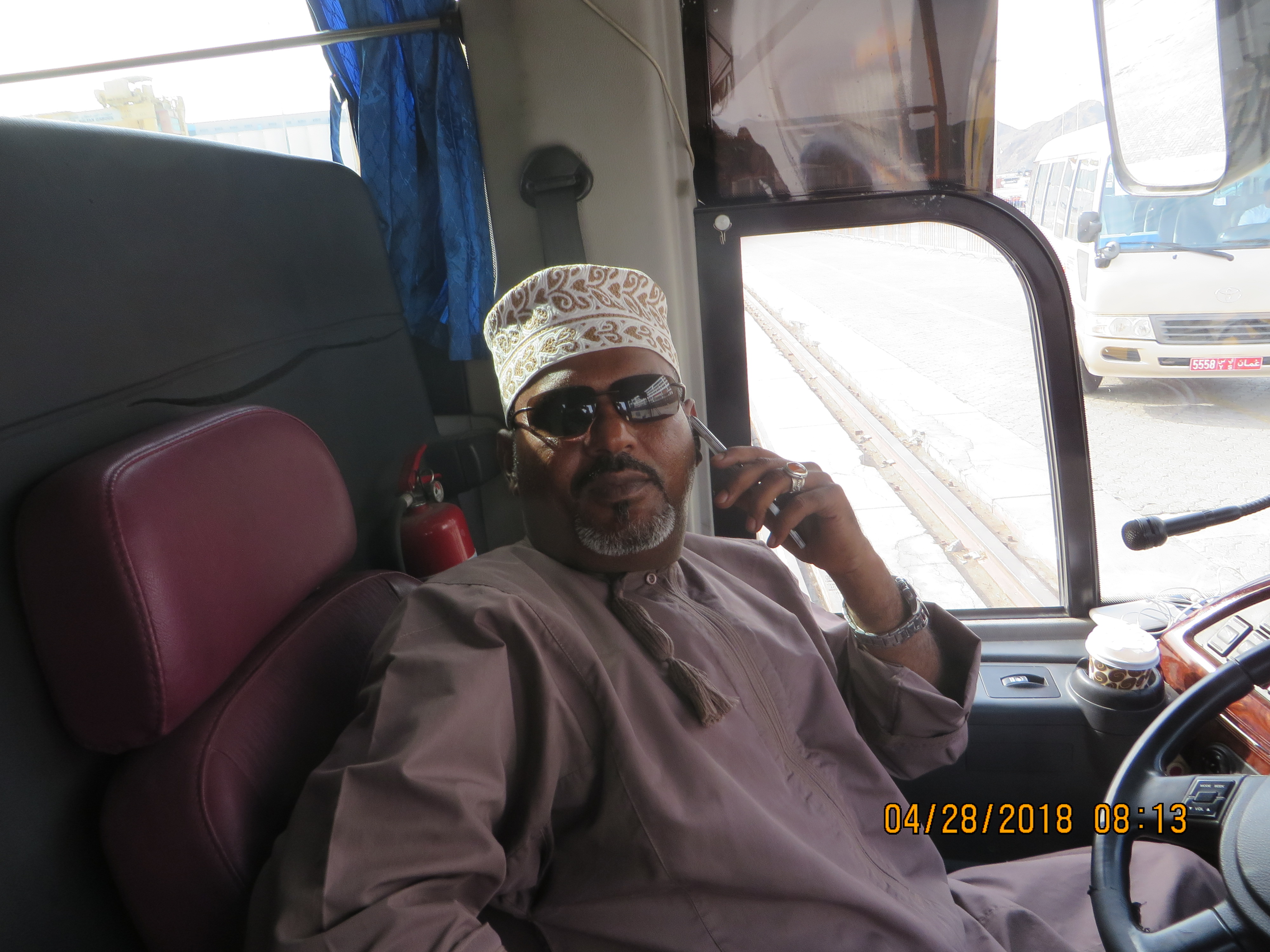 Our bus driver wearing the traditional Omani cap. I loved how he struck a pose when I asked to photograph him.

We had a day at sea between Muscat and Salalah. When we arrived in Salalah, everyone was eager to get out and explore the southern part of Oman, but our time in Salalah was ruined by a government bureaucrat doing what government bureaucrats do everywhere. Our ship docked an hour early this morning at the request of the port authority. Buses and vans were lined up and ready with local guides and drivers to take us to various sights in the vicinity of Salalah. The necessary documents for our disembarkation were given to the local authorities. The local government official reviewed the report from the ship’s doctor as is required. It seems that the number of cases of travelers with symptoms of GI problems reported last evening was different than the number reported this morning due to a couple of passengers visiting the ship’s physician overnight. The local bureaucrat refused to grant us permisson to leave the ship due to the discrepancy in these numbers. Supposedly, this person feared that we would cause an outbreak of Norovirus in Oman. Apparently, there was no explaining to or reasoning with this person. Drama junkies are like that. (In this case, honesty was not the best policy; the numbers reported should have been the same no matter what they were in reality.) Therefore, Captain Tysse was left with no other option than to pull up the gangway, push away from the dock, and set sail for our next port of call. He said he had never had anything like this happen before, and he has logged a zillion miles on the bridge of a ship. We were sorry to miss seeing the area, but the really big losers are the local tour operators. Not only those here today, but all the tour operators in the area now and in the future. Captain says Azamara will never call at this port again. Probably other cruise lines will look at what happened here today and also decide to re-evaluate calling at this port. If the company had known this would be our reception, perhaps we could have sped right by and had an extra day in Israel, Jordan, or Egypt. As it is, they had to return all the money for shore excursions not taken as well as plan activities to keep the passengers happy all day.

But wait . . .There is yet another twist to this tale. It turns out that the first local official to come across the gangway from Salalah promptly gave the ship clearance and twenty seven passengers left immediately for a day in port. Since they were spending the day on their own, there was just no telling where they went in the area. They could have been scuba diving, they could have been shopping, they could have been touring with a private guide. There was no way to contact them. As much as the captain wanted to leave, he had to await the return of these passengers. Therefore, the ship’s crew was left scrambling to figure out what to do with the rest of us today as we sat awaiting their return. The scheduled departure time was 6 PM; we pushed away shortly before 5 PM.

Rick wanted everyone onboard to go out on their balcony or to a deck and “moon” the port and city of Salalah as we pushed away from the dock, but I fear that would have sparked an international incident, especially in a Muslim country. We departed Salalah, Oman on a sour note, but I cannot end this post like that. Below is a beautiful picture of a date palm in the night sky of Muscat and a picture of some beautiful  flowers at one of the palaces of the sultan. 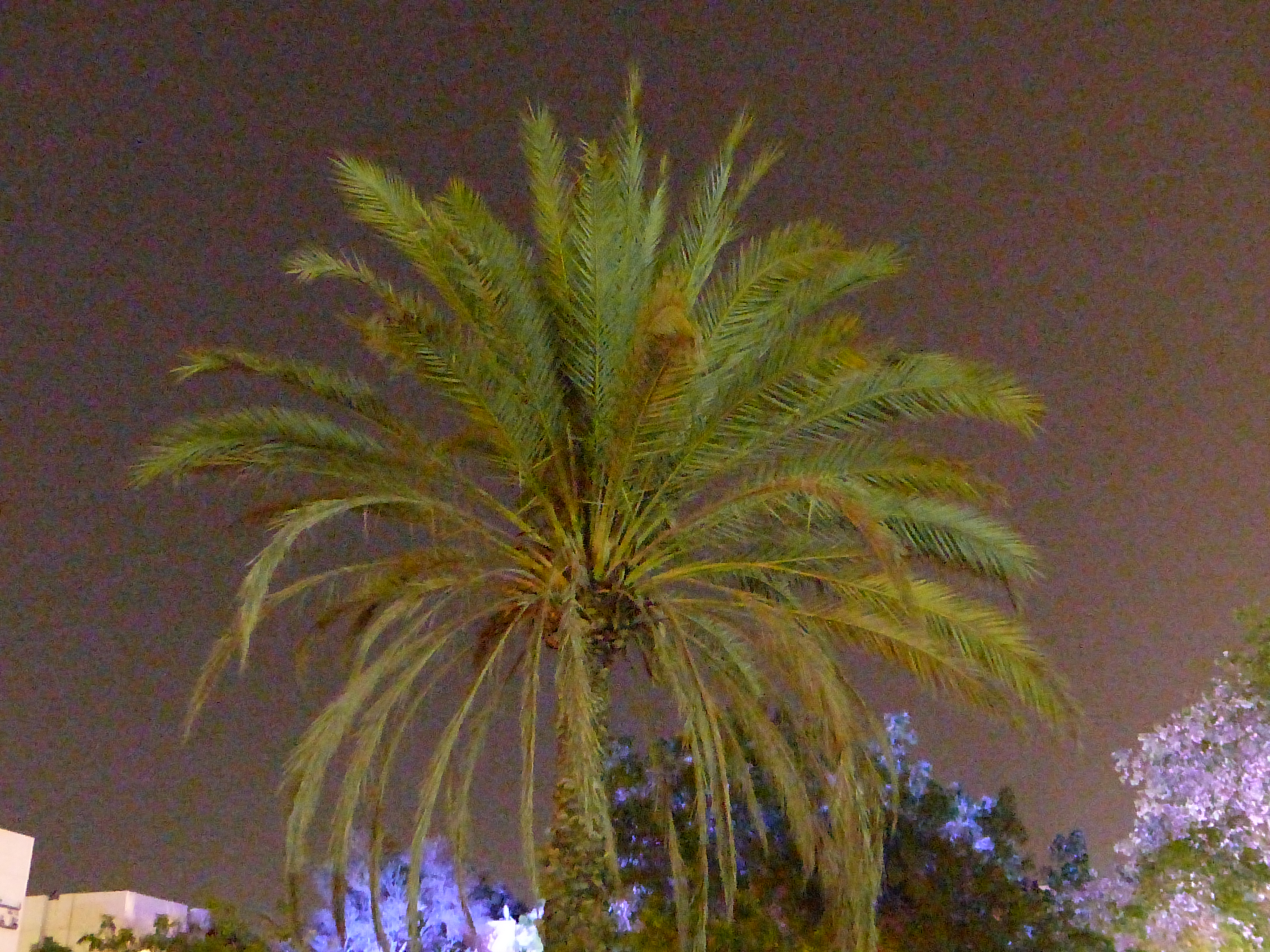 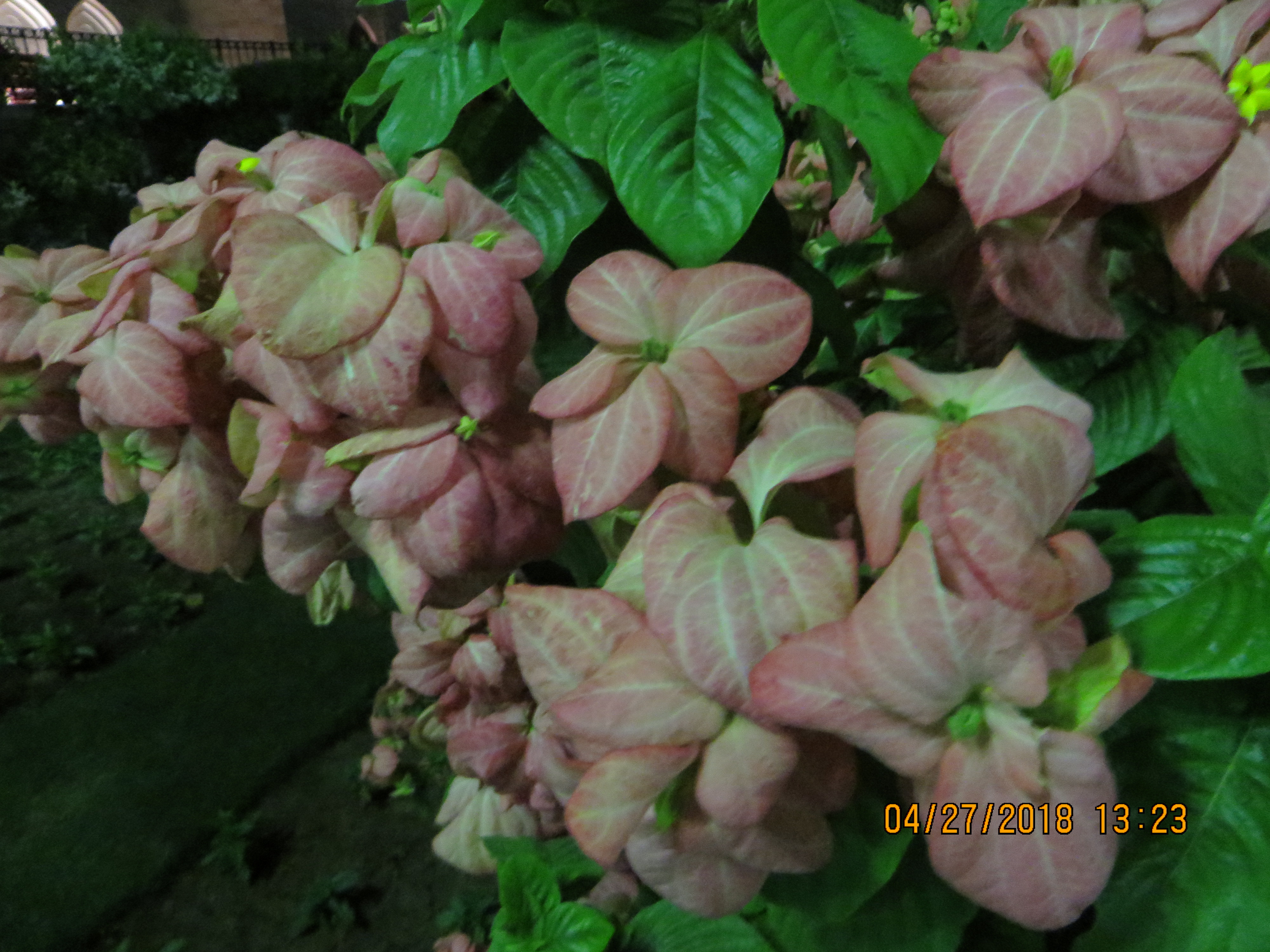