Breathtaking. There is no other word to describe it. Petra is Jordan’s treasure, its pride, its joy. Once home to thirty thousand people, this massive city arose in the high desert of Jordan in the heart of the Shara Mountains several thousand years ago, although it’s hard to get an accurate timeline for Petra’s history. Petra, which means “rock” in Greek, was home to the Nabateans, a nomadic tribe whose wealth came primarily from the incense trade. Petra was conveniently located on a strategic trade route crossroads in the ancient Near East. The rock from which the structures were hand carved is beautiful rose sandstone and the colors seem to change hourly as the sun makes its way across the chiseled details of the temples and tombs.

The Nabateans controlled the area for centuries, but the Romans conquered Petra around 106 AD. They oversaw monumental expansion of the city including the huge theatre which could accommodate four thousand. The Romans left their mark with ornate columns and other exquisite features. Christianity came to Petra, and later the city fell into Muslim hands.

Overall, the Nabatean culture was quite advanced. They were way ahead of their time in terms of women’s rights. Women served as priestesses and could own property. They could bring lawsuits and represent themselves in court. There were even coins with women depicted on them. The Nabateans’ masonry skills were legendary. They were polytheistic and had ceremonies worshipping the sun. In their culture, getting drunk was verboten, unlike the Romans, who often drank to excess. Today the Nabateans are recognized for the way they not only survived in a harsh climate, but actually thrived in it. 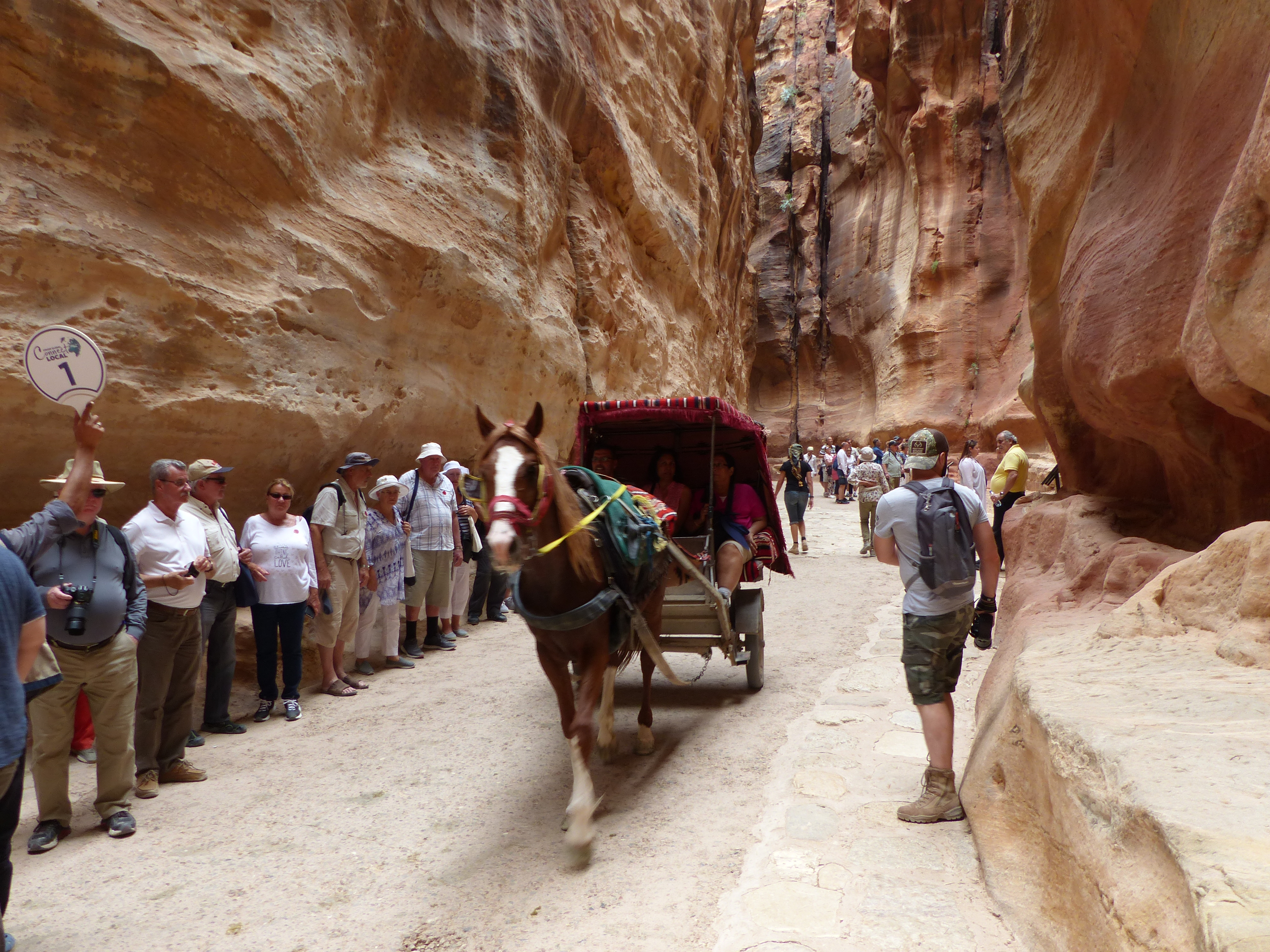 One mode of transportation through the Siq.

Being in the desert, control of water was key to longevity for any society. The Nabateans were masters at hydrological engineering. The system at Petra was nothing less than phenomenal, and the damage it sustained in 363 AD by an earthquake played a large role in the decline of the city. The city was abandoned in the 1100’s and largely forgotten. A Swiss explorer posing as an Arab academic “re-discovered” Petra in 1812. At the time, it was occupied by Bedouins. It was not until the late 1920s that any real excavations commenced. The 1989 Steven Spielberg movie Indiana Jones and the Last Crusade gave Petra a huge publicity boost.

Today, Petra attracts millions of visitors because of its incredible  beauty. It has been estimated that only about five percent of the city has been unearthed. The Treasury is the iconic Petra structure, and to get to the Treasury, you must first walk through the Siq, a beautiful natural gorge which is probably about one half mile in length. It is sort of an opening act for the Treasury. We loved the first peek at the Treasury, pictured below. After that first glimpse, you walk just a short distance to behold the absolute beauty that is the Treasury, also known as Al Khazna. 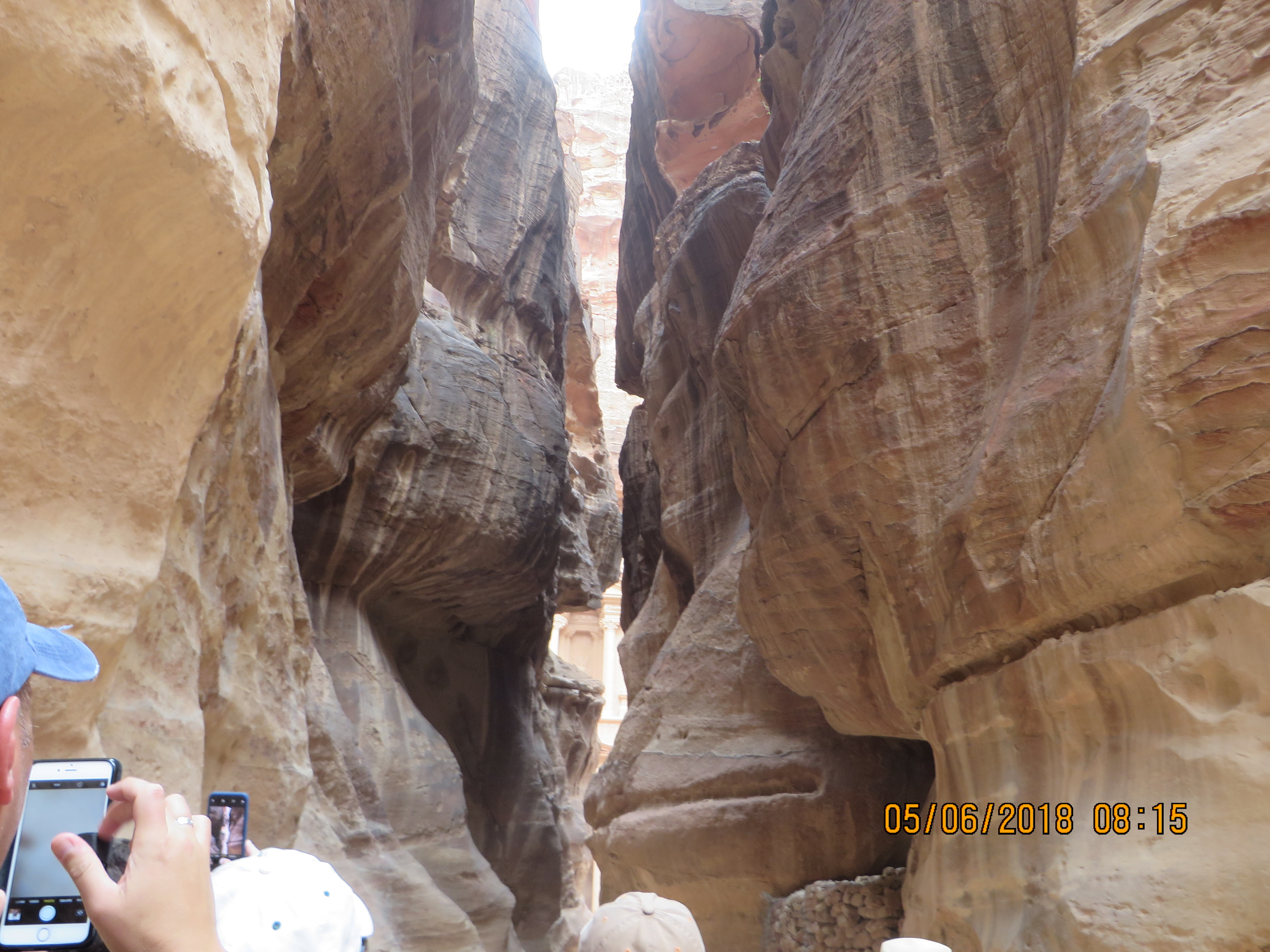 First glimpse of the Treasury through the Siq 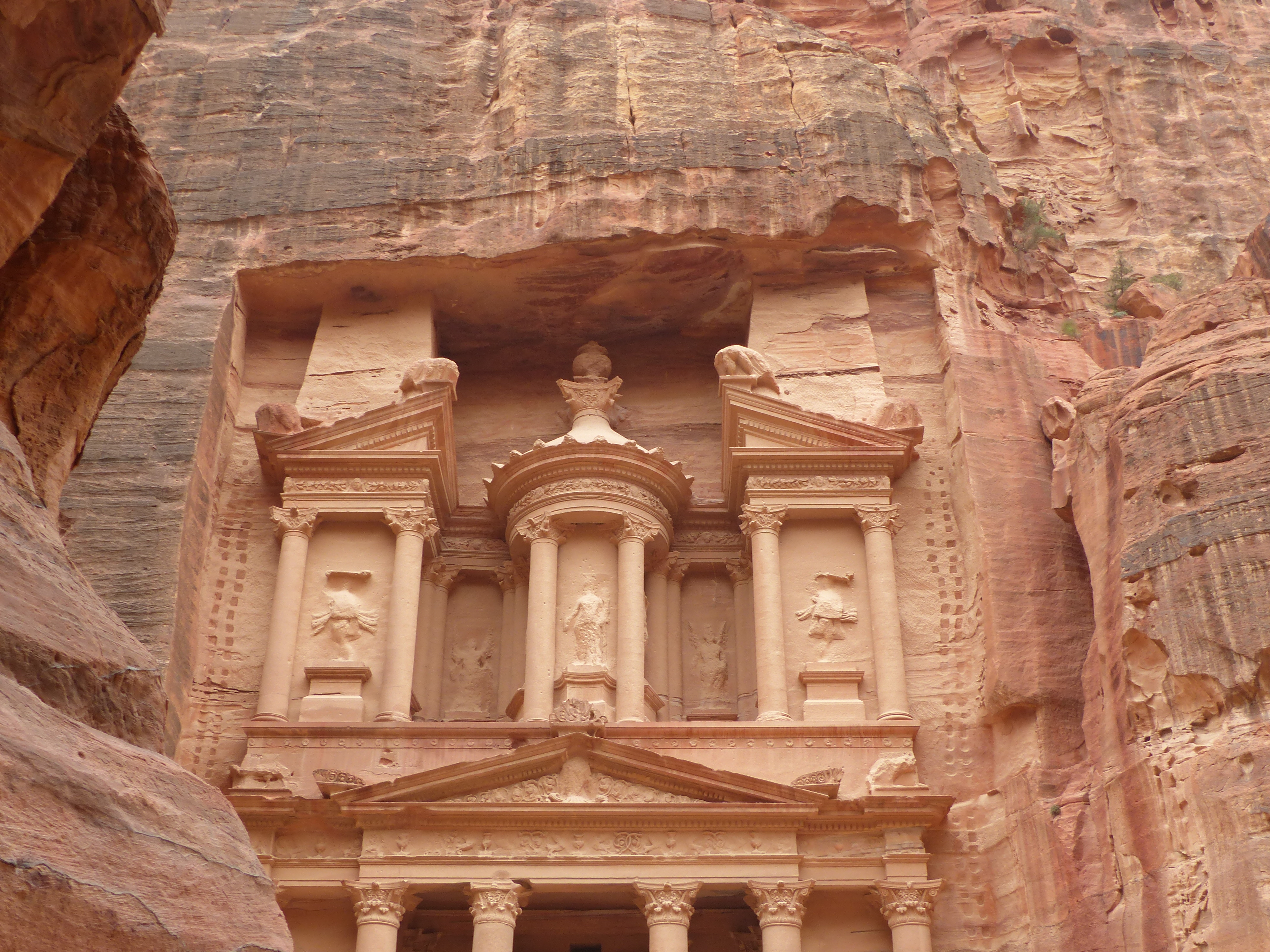 The Bedouins shot up this urn thinking they would find the treasure of the Nabateans inside.

We continued on with our guide although most of the people in our group dropped out to do their own exploration. We followed him back behind the Treasury to areas that most people never see. We were so glad we did not miss this part of the complex. The theatre at Petra is the only theatre in the world that is carved into the side of the mountain. And speaking of carving, the Nabateans carved their temples and tombs from the top down. 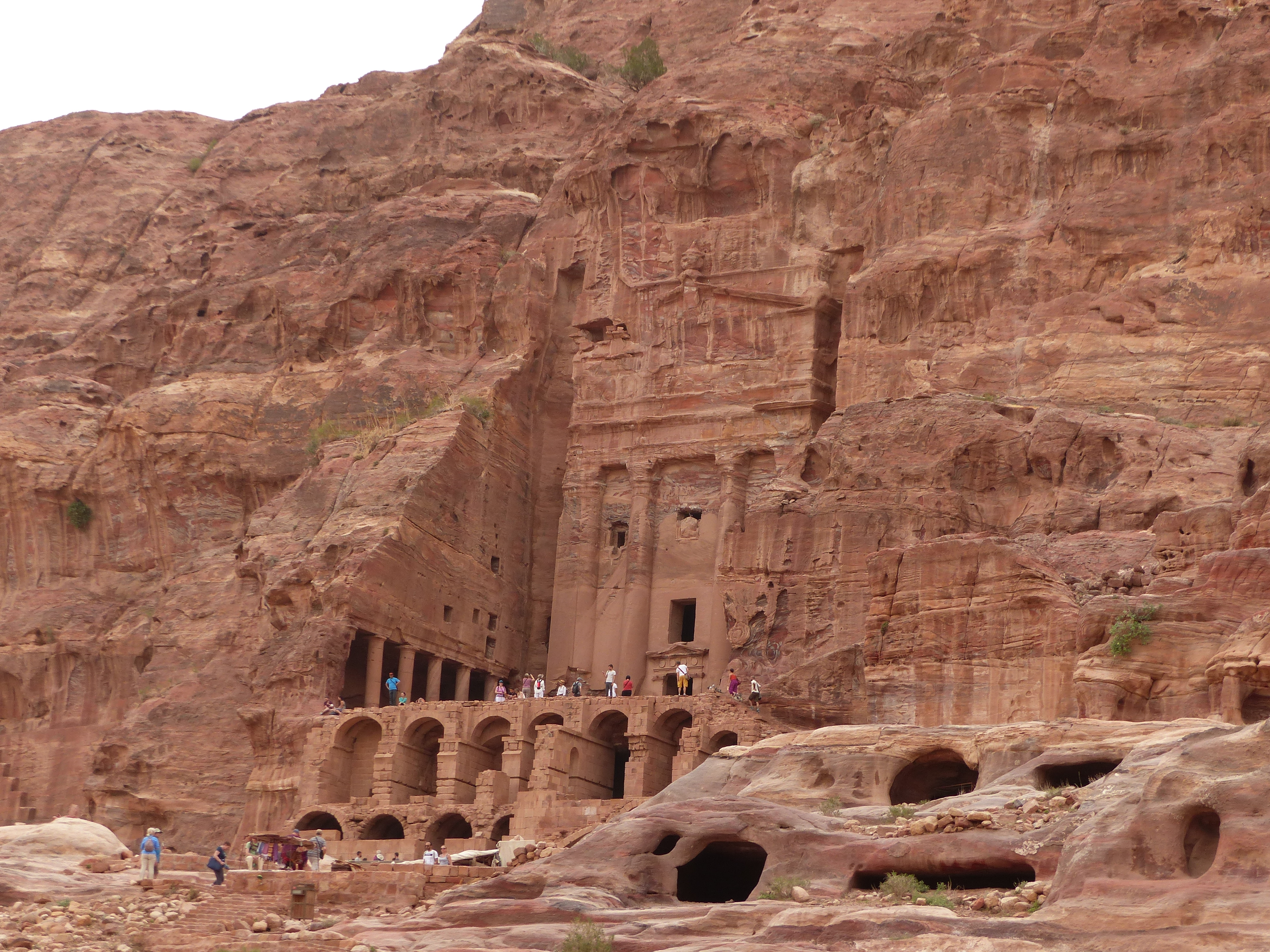 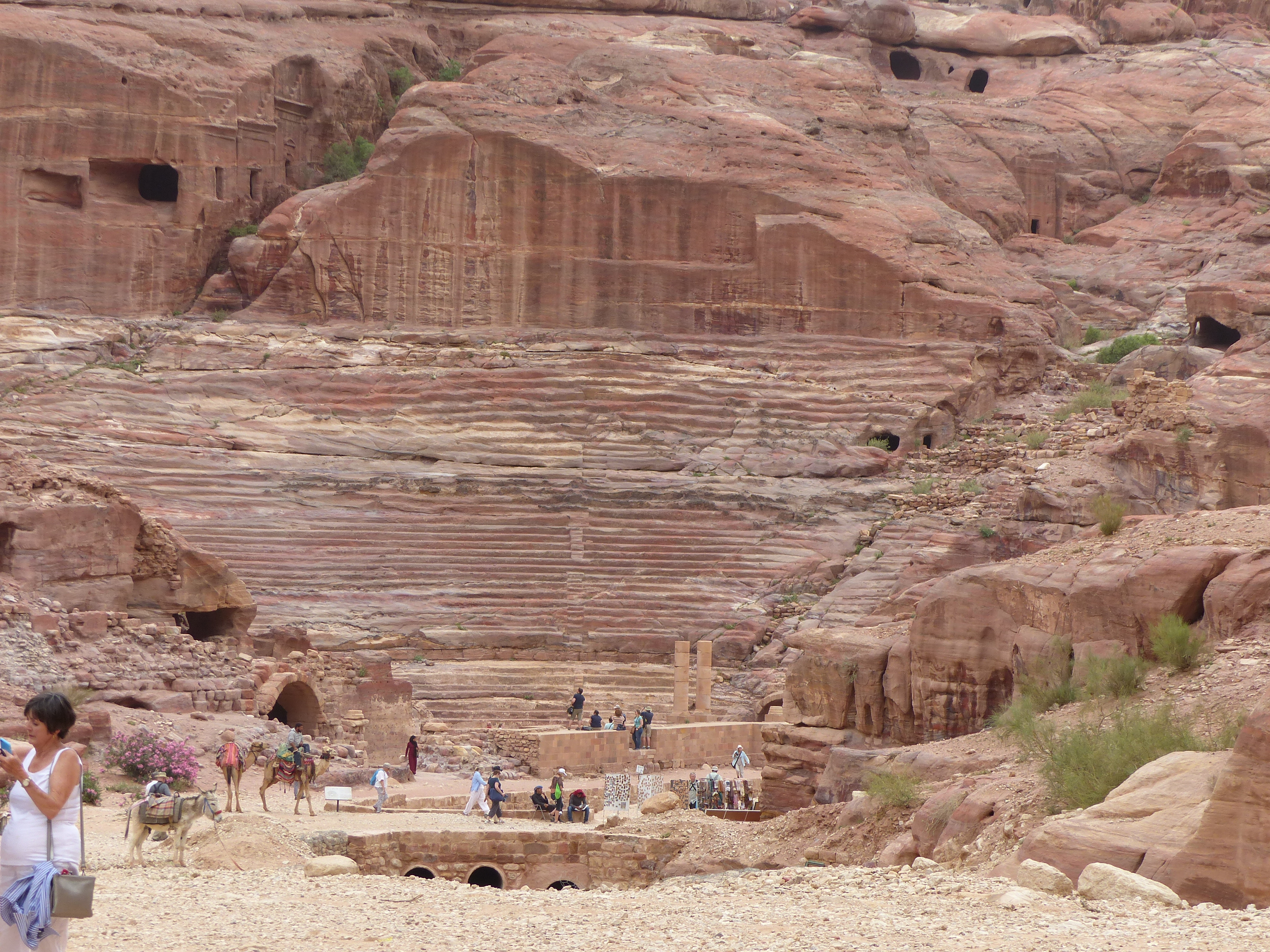 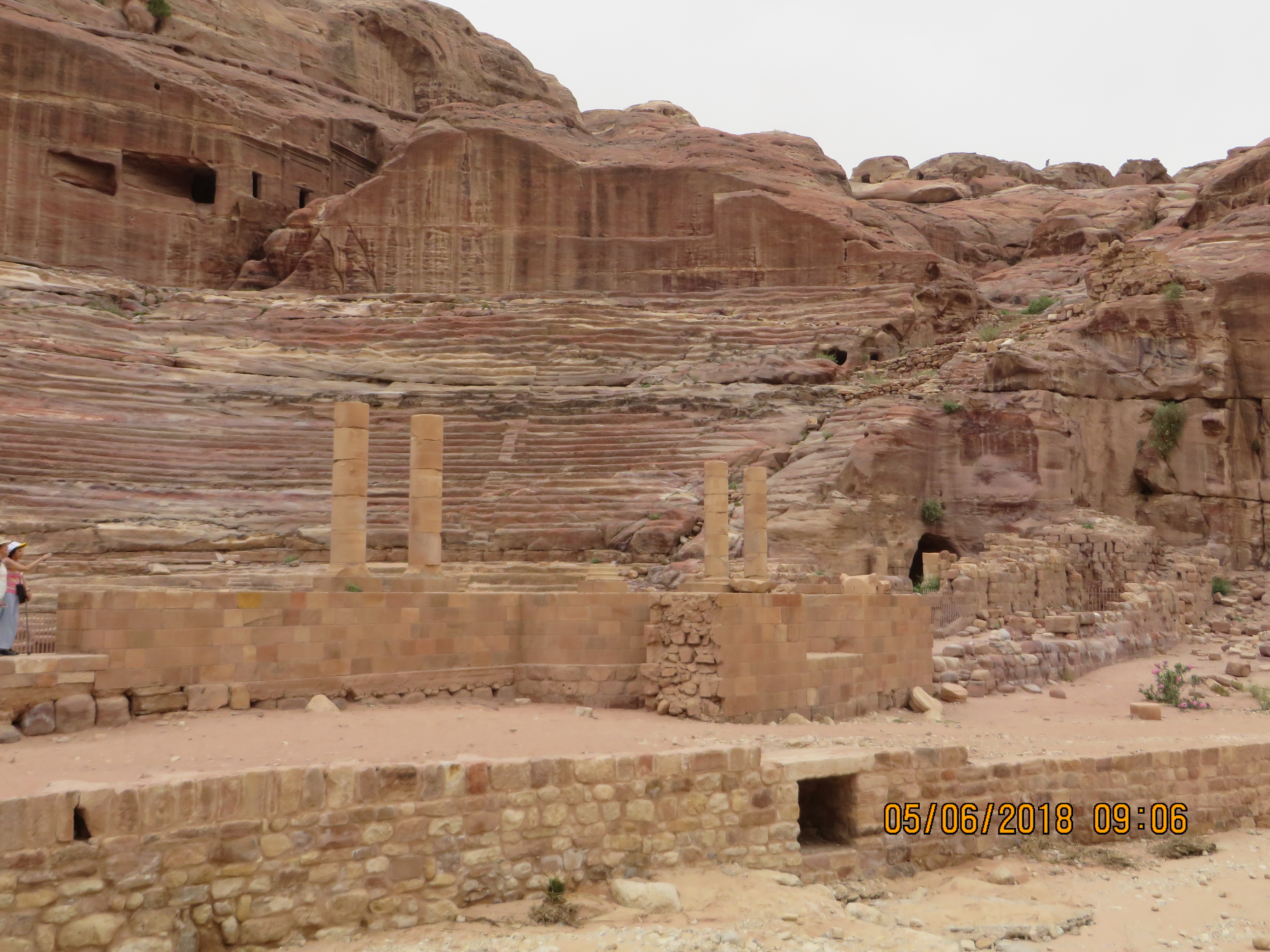 The Theatre: a closer view with the remains of the stage.

There is so much to see here and it is just impossible to take it all in in just one day. Still, we were grateful to have had this day at Petra,  which was designated in 2007 as one of the new Seven Wonders of the World. It was a travel dream come true for these Lawsons on the loose. 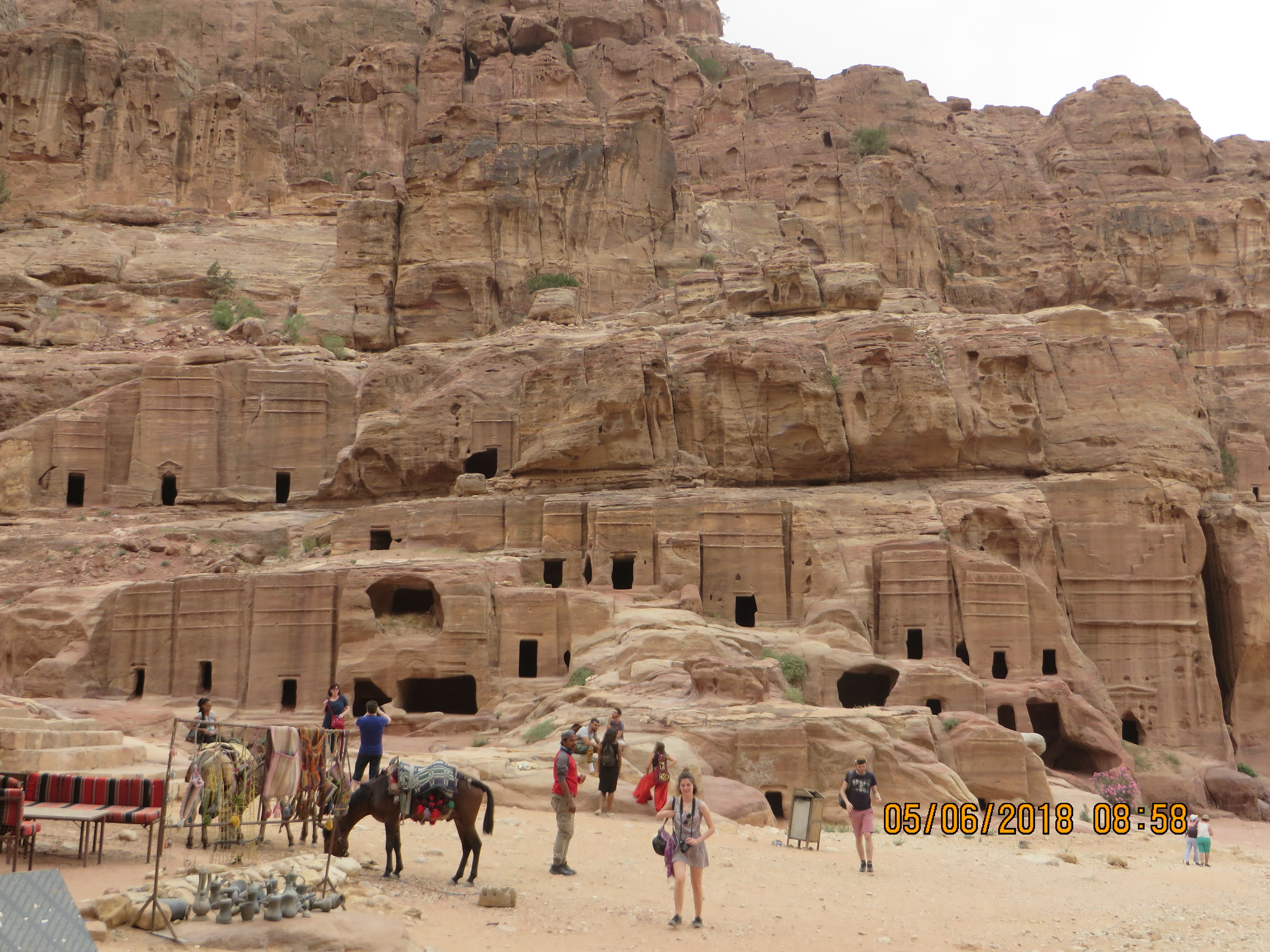 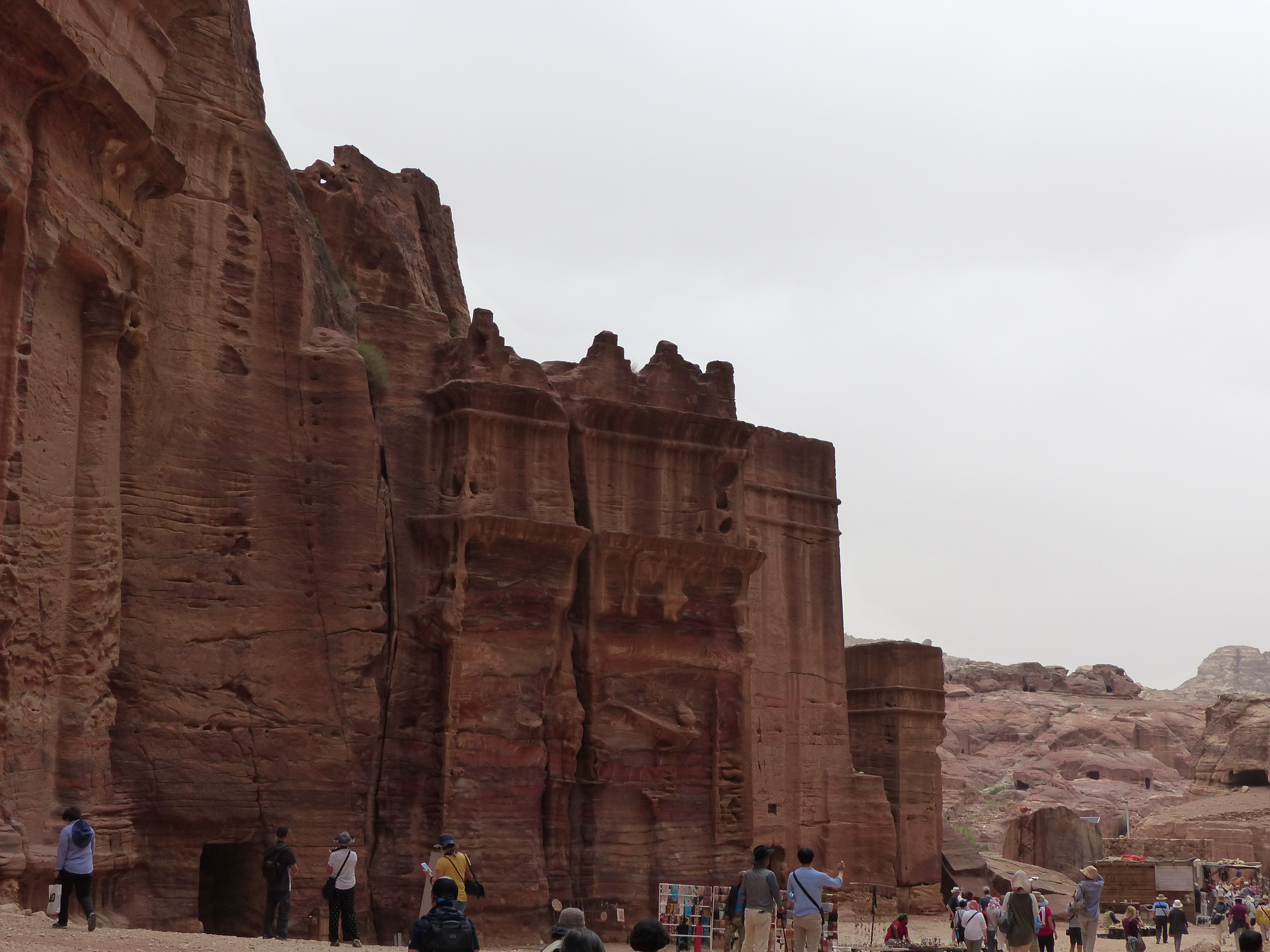 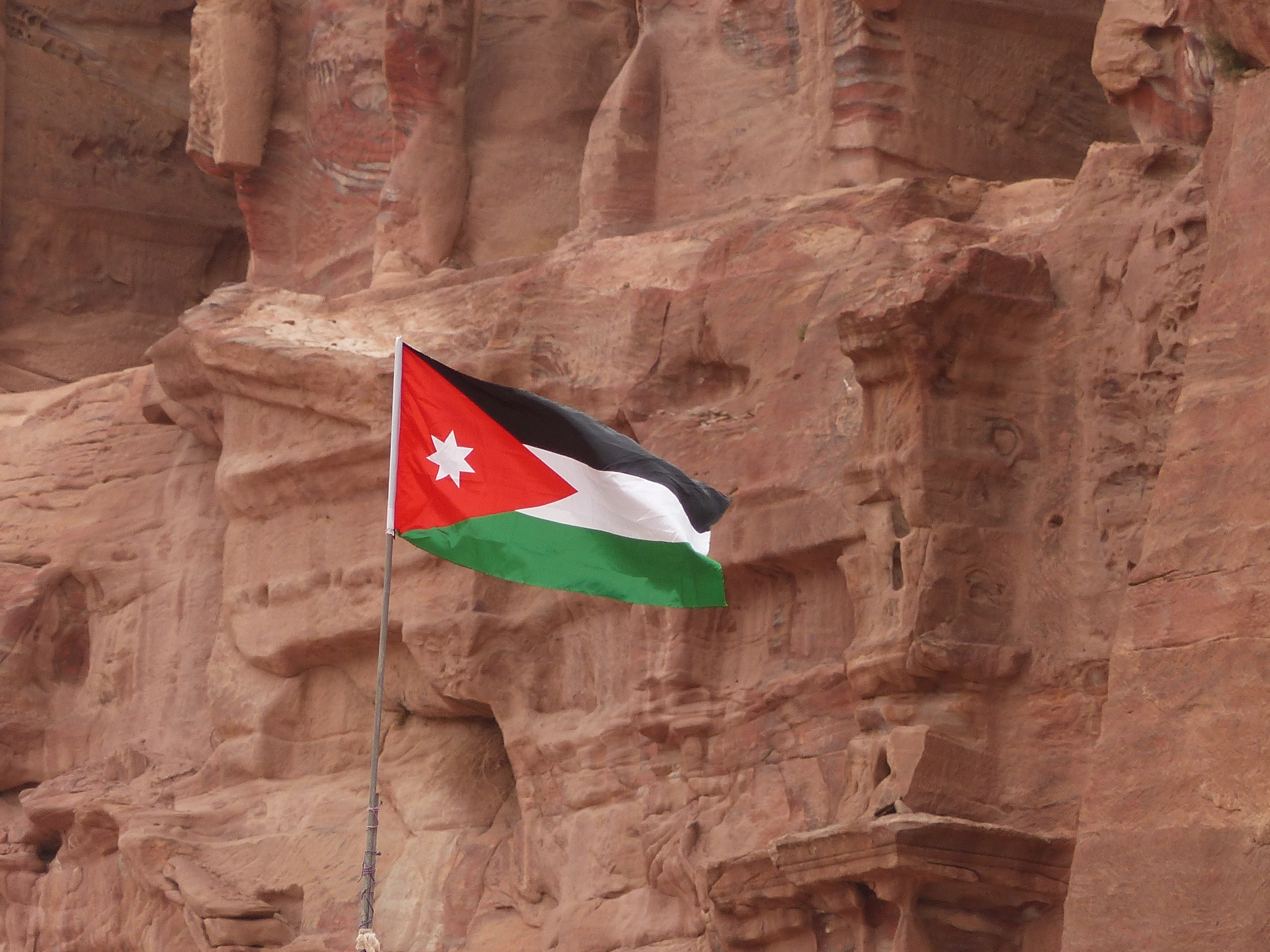 The flag of Jordan 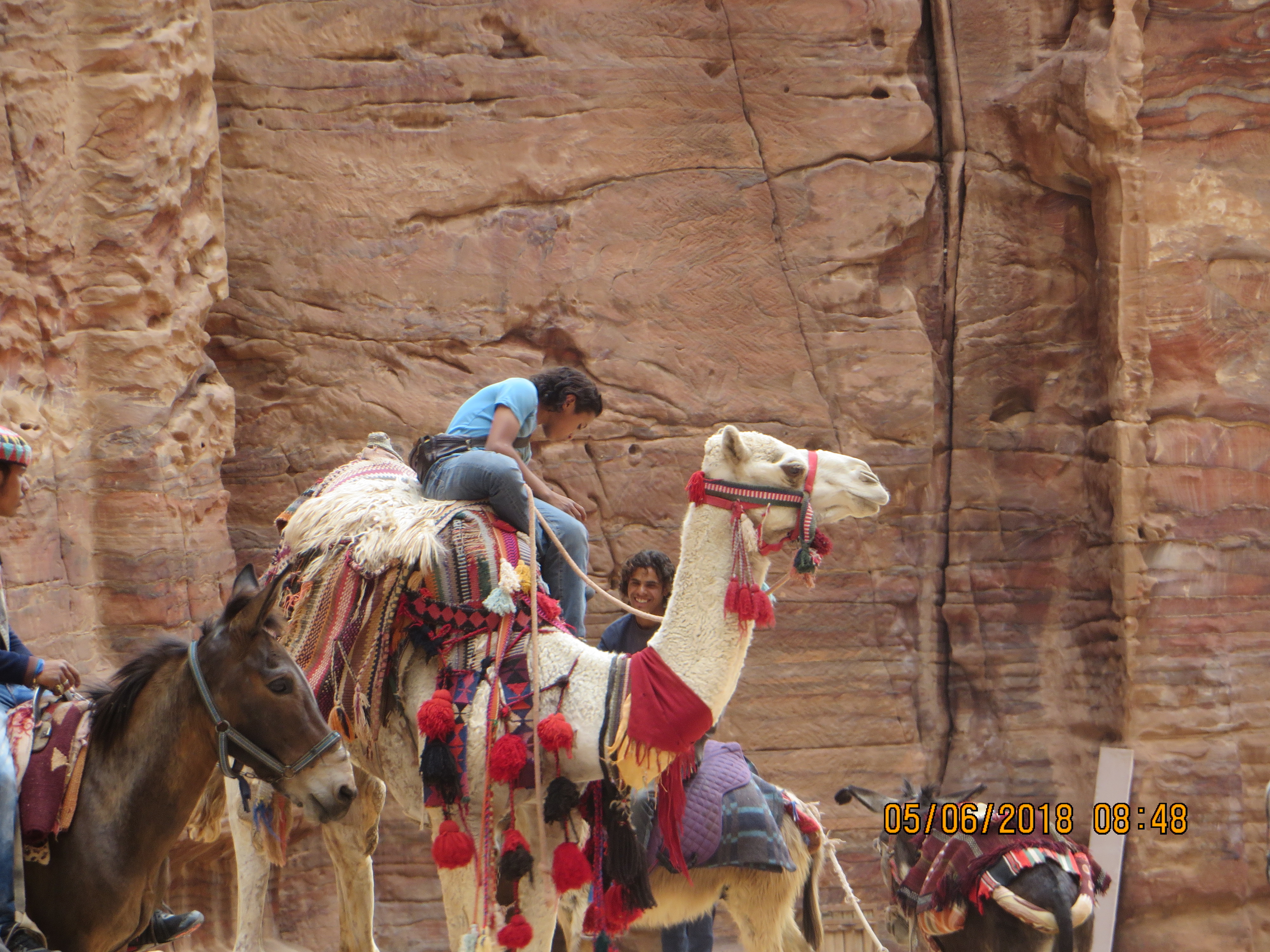 Camels provide transportation around the grounds of Petra. 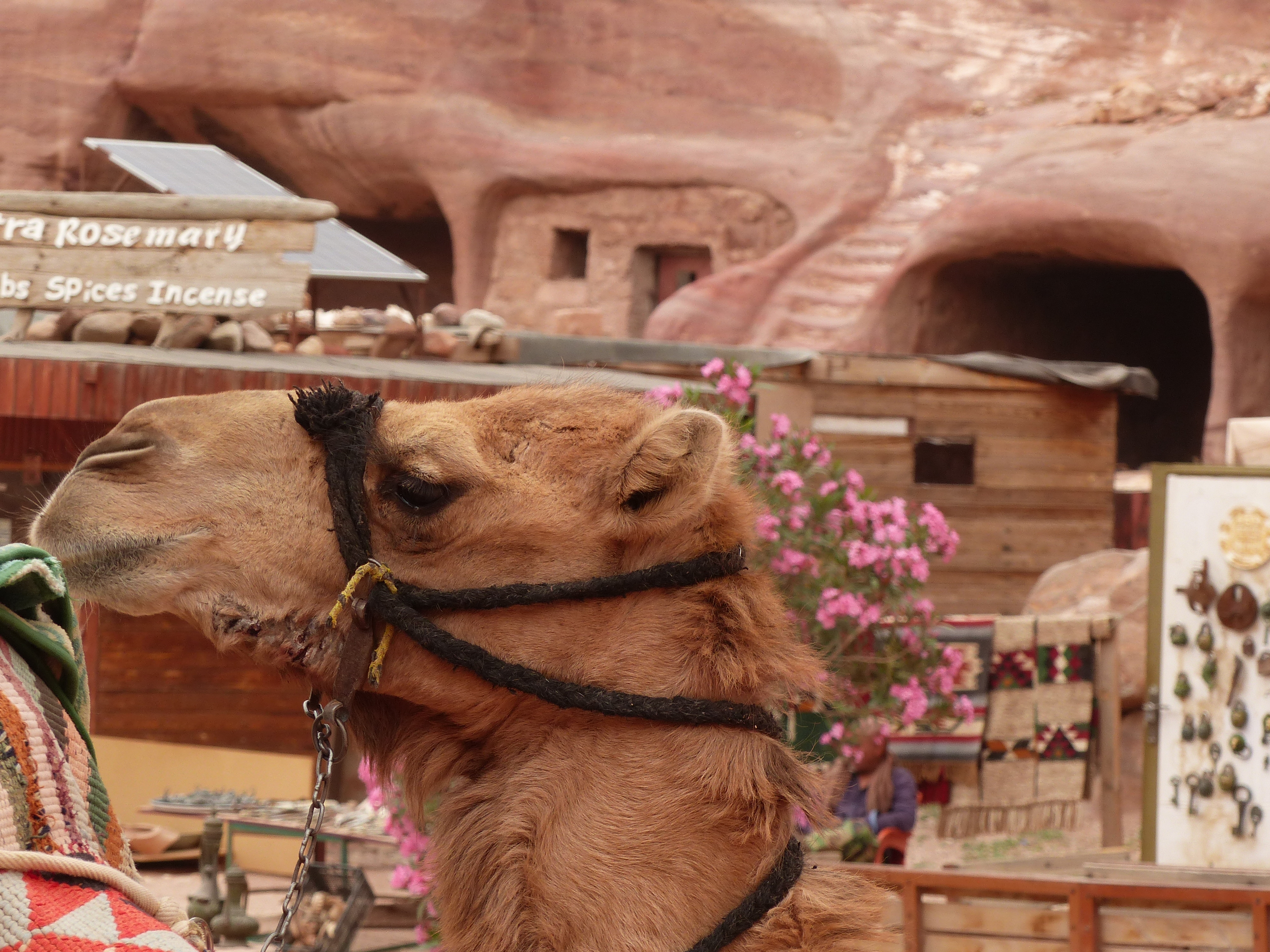