We have this thing at home that looks like an old fashioned wooden fold-out ruler—you know, the kind of ruler/yardstick thing your parents had. I think it may be called a carpenter’s ruler. Only ours is not a ruler; it’s a timeline of the history of the world. We found it in the gift shop at Ephesus when we were in Turkey with Logan back when he was about thirteen. For some reason, I thought about that gadget because we arrived just outside the Suez Canal yesterday evening and being there got me wondering what else was happening in the world in 1869. Since I don’t have that gizmo on hand, I did a little research. Turns out that some pretty cool things happened that year. Chewing gum was patented, Wyoming gave women the right to vote, and Tolstoy’s War and Peace was published, just to name a few. At the same time, all the way around the world, the Suez Canal opened. Ironically, the transcontinental railroad was completed the same year when the final spike was driven in Utah. Both the railroad and the canal served to shorten the time to circumnavigate the globe.

However, truth be told, the canal that opened in 1869 was not the first attempt to find a way to shorten the time it took to get around by water in this part of the world. There is evidence that similar waterways, though not taking exactly the same route, were actually constructed many centuries before the birth of Christ. It seems that Napoleon gave the concept serious consideration after he conquered Egypt in the late 1700’s, but his engineers gave him incorrect information. They thought that the Red Sea was at a higher elevation than the Mediterranean and it would flood the Nile delta with salt water if they tried to link the two bodies of water. In any event, none of the previous efforts succeeded, often because maintenance was a never ending task. With all this sand, it would take the patience of Job to keep the silt out. (Speaking of Job, I am still bummed about missing what is purported to be his tomb when we were not allowed to go ashore in Salalah, Oman.)

The canal connects the Mediterranean Sea and the Red Sea, making it possible to avoid the long and treacherous journey around the southern tip of Africa. It is about 120 miles in length and took fifteen years to plan and complete. It is at sea level, so there are no locks to enter and exit like there are in the Panama Canal. A more direct route exists, but Ferdinand de Lesseps, the visionary who planned this canal, decided to take advantage of the four large lakes in the area, much like the Panama Canal takes advantage of Gatun Lake. The difference is that Gatun Lake is man-made and it serves to provide water for the locks. The Chinese want to build a mega canal through Nicaragua utilizing the huge Lake Nicaragua as a large chunk of the area of transit, but it is expected to be an environmental catastrophe if it comes to fruition.

Last night, probably around 8:30 or so, the captain dropped not one but two anchors. We sat still in the water until around 4 AM when Rick said he heard horns blowing and saw flashing lights.That was the signal from the harbormaster that it was our turn to enter the canal. Rick said that the anchors were pulled and the engines fired up for the transit. I slept through all that; Rick says that after all these years, I still sleep very irresponsibly. What can I do? That’s just me, but when I awoke this morning, we were making great time through the canal. Rick decided that we should enjoy a little champagne on our veranda late this morning as we sailed along the canal. The day was well spent taking pictures from the upper decks and listening to commentary from Dr. Shindler, our guest lecturer on board. We will complete our transit around 3 PM when we enter the Mediterranean Sea. 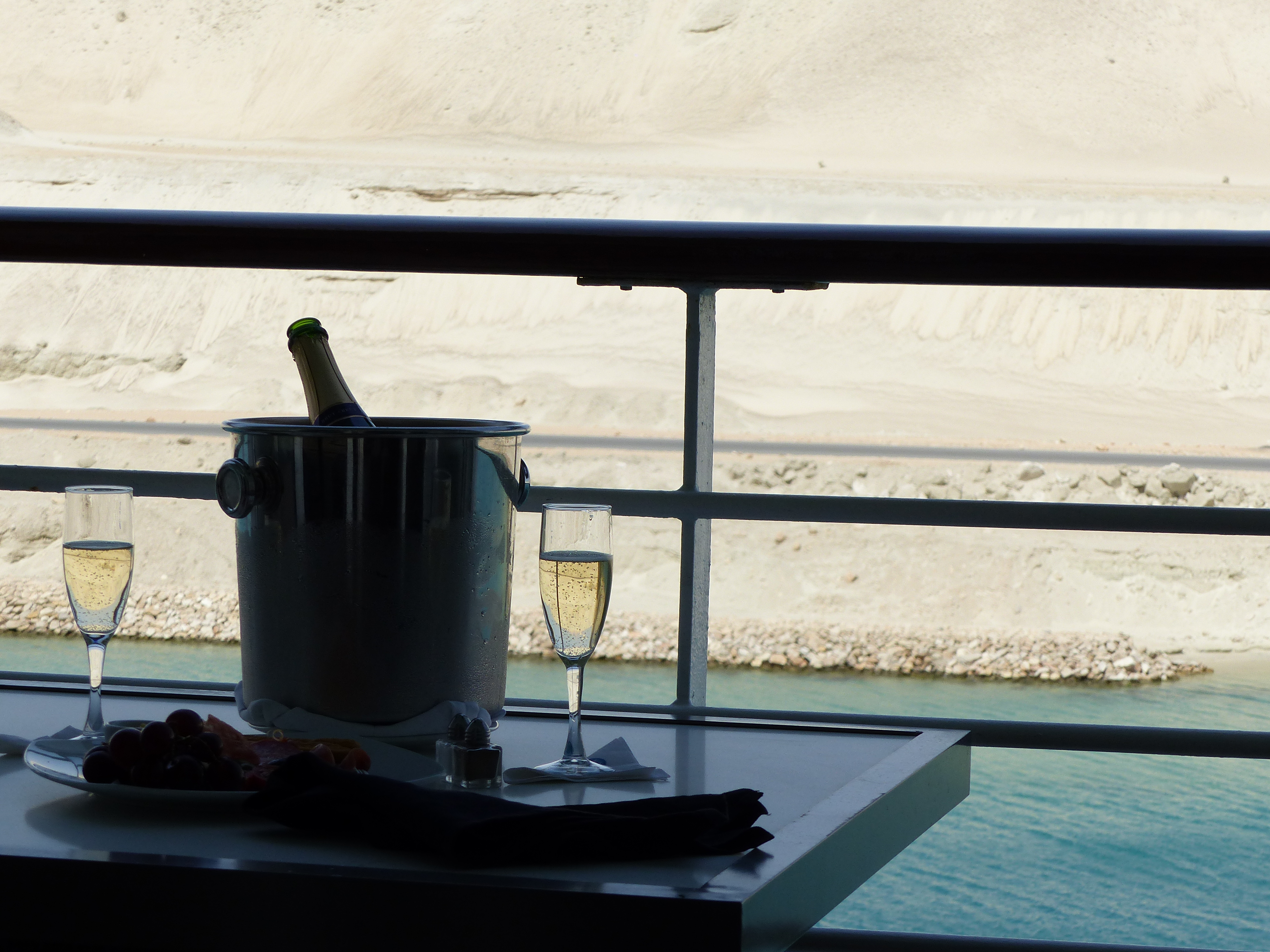 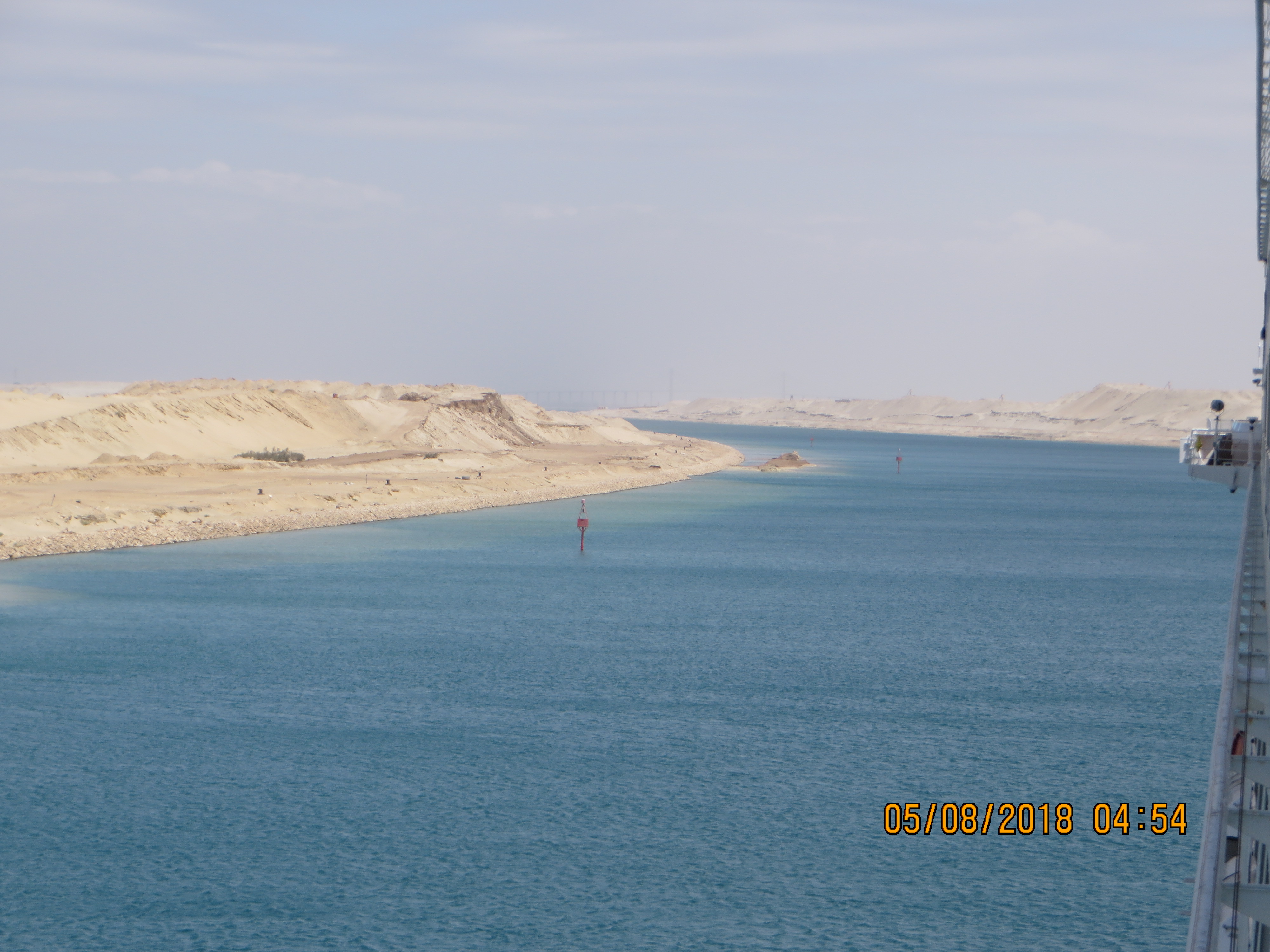 The Sinai side of the canal 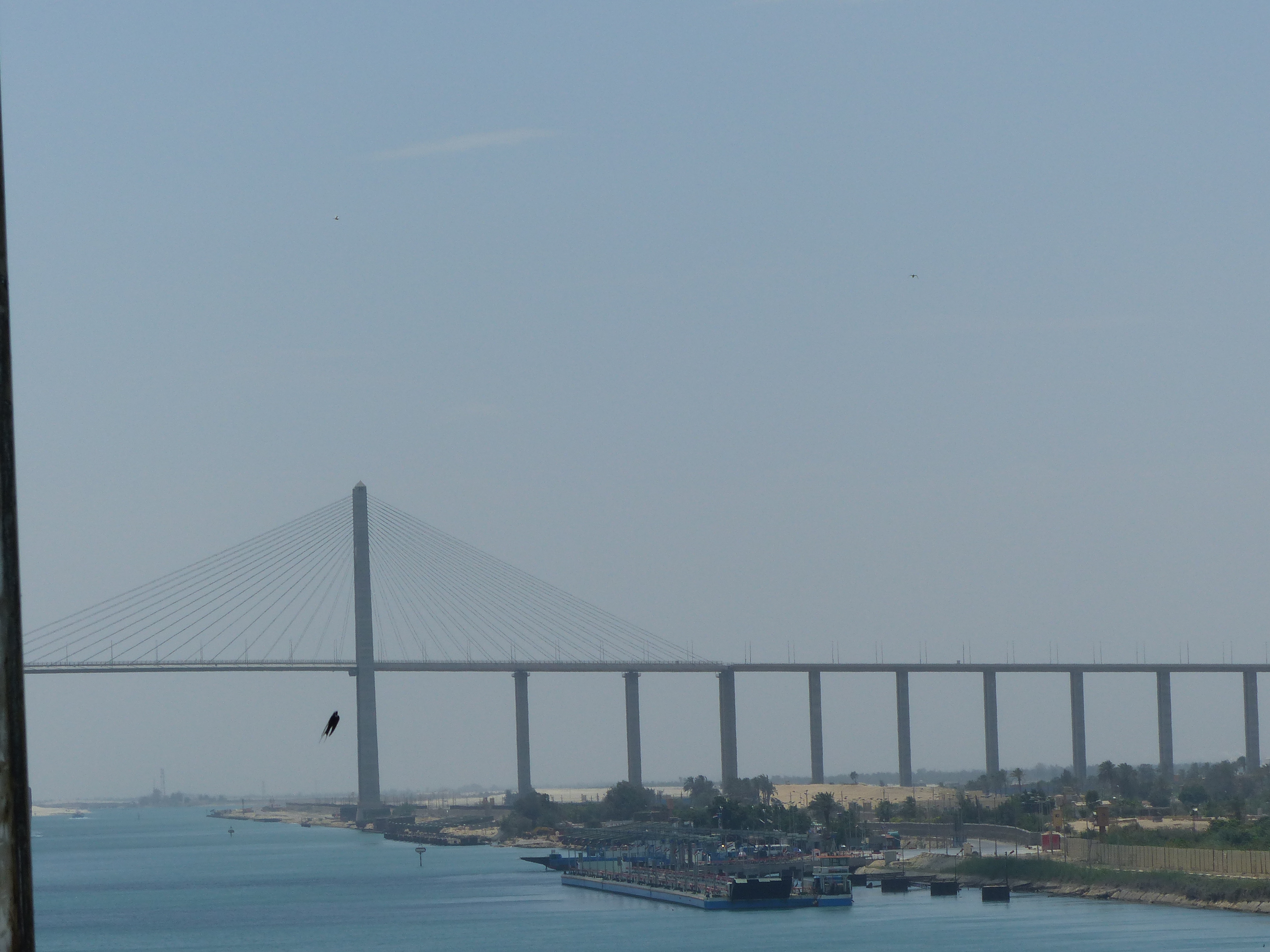 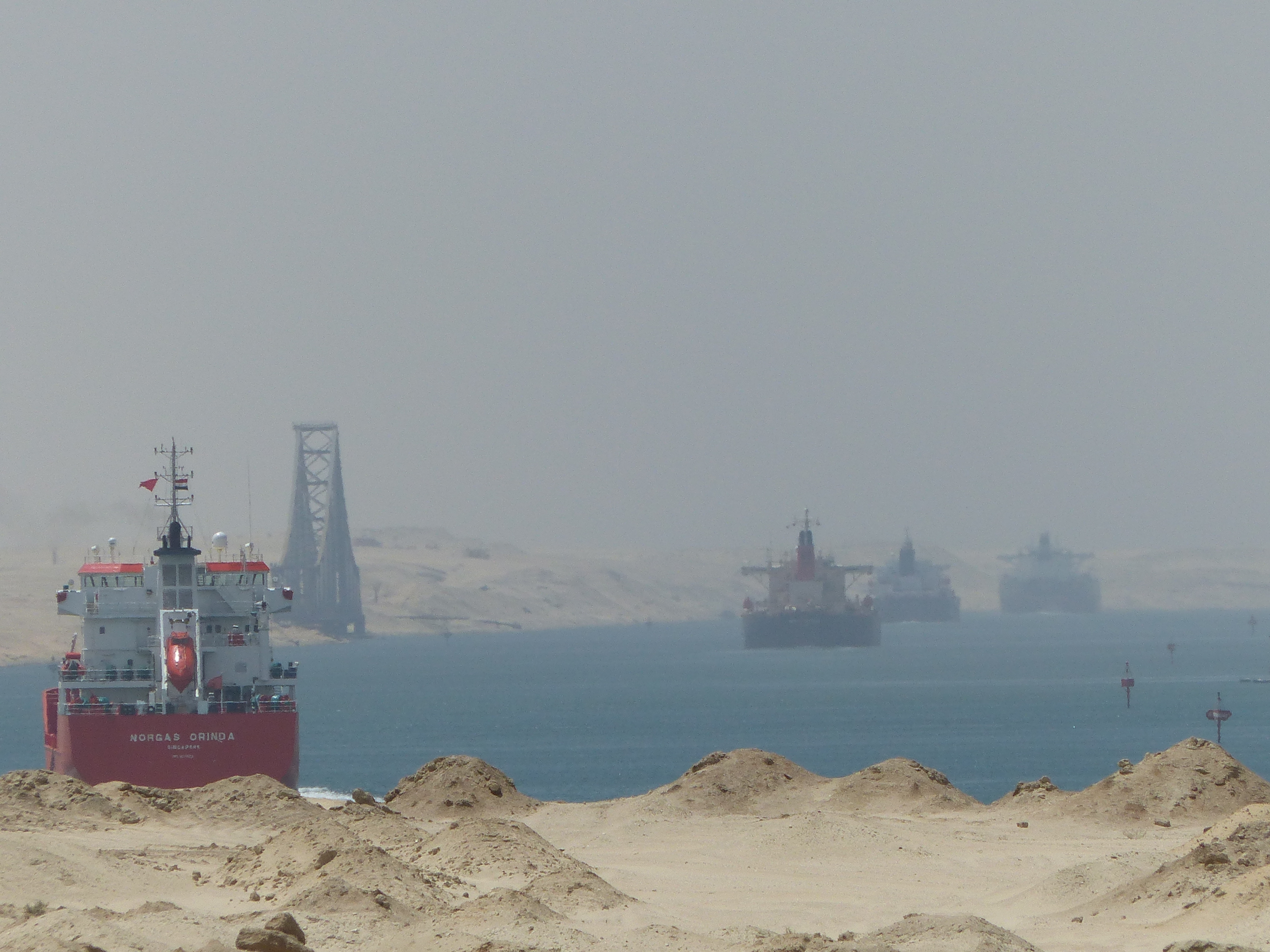 Fellow travelers on the canal.

I believe that this is our fourth or fifth canal. I could be mistaken, but it seems that some of the waterways we have been through in Germany are canals connecting some of the great rivers of Europe. Years ago, we went through the Corinth Canal in Greece. Last year, we transited the Panama Canal. Canals are fun because they are all so different but yet serve the same purpose.

I will end with my favorite little Suez Canal story. The French sculptor Bartholdi pitched the idea of allowing him to construct a massive statue of a woman in Egyptian garb holding a torch aloft. The scupture was to be named “Egypt Bringing Light to Asia.” The structure was to do double duty as a lighthouse. In the end, he was unable to sell the concept to the Egyptian government and the Suez Canal Company, but in 1886, an eerily similar statue of a lady by the same sculptor was erected in the New York harbor. The name was tweaked a bit; it was named “Liberty Enlightening the World,” or as we know it, the Statue of Liberty.