The Garden Cemetery of Savannah

“I gazed awe-stricken as one new-arrived from another world. Bonaventure is called a graveyard, a town of the dead, but the few graves are powerless in such a depth of life. The rippling of living waters, the song of the birds, the joyous confidence of flowers, the calm, undisturbable grandeur of the oaks, mark this place of graves as one of the Lord’s most favored abodes of life and light.” 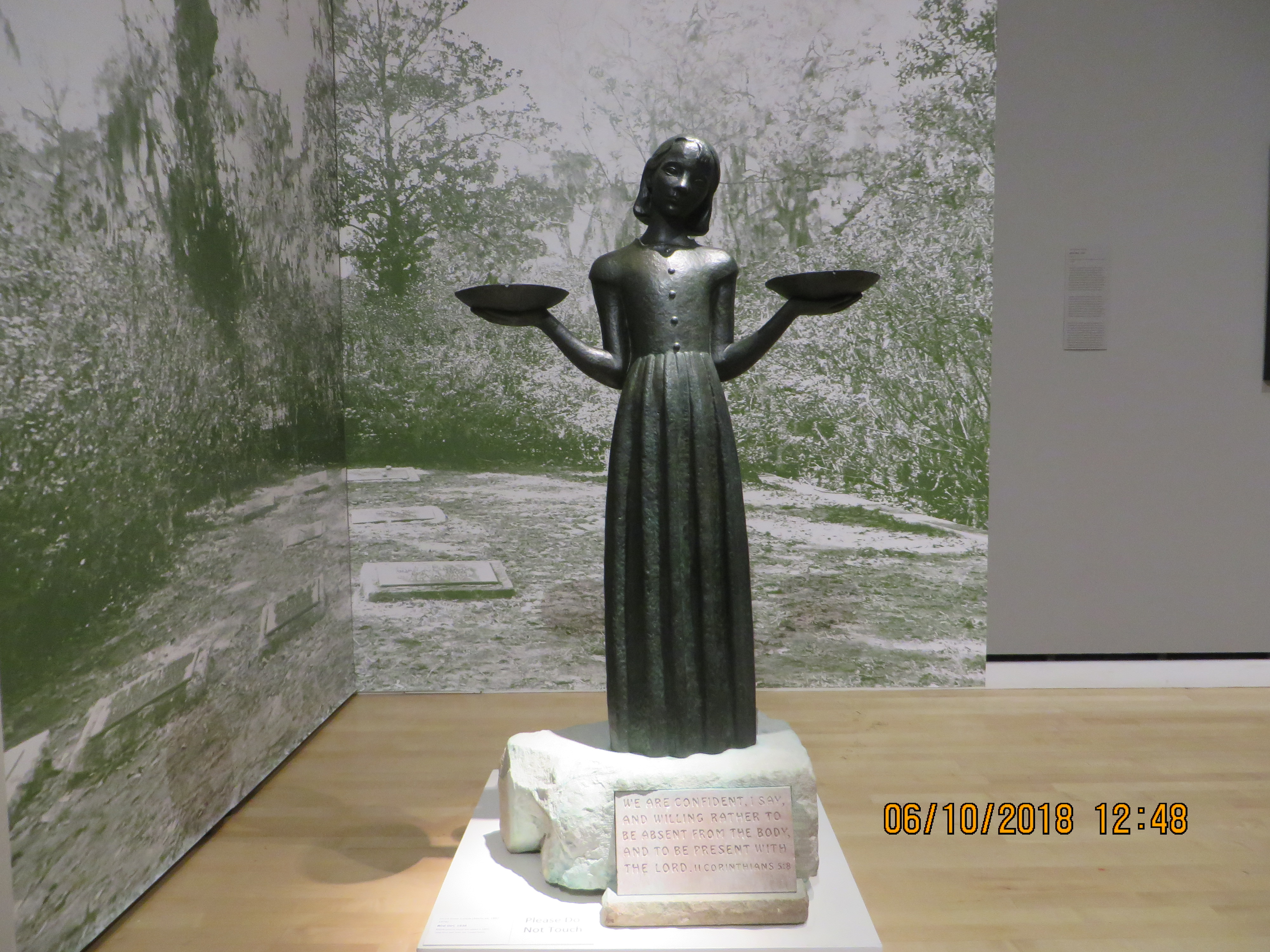 I had never heard of The Bird Girl or Bonaventure Cemetery back in the mid-1990’s when I first picked up a copy of John Berendt’s 1994 novel Midnight in the Garden of Good and Evil. That book was rocking the literary world, especially in the South, and it left an indelible mark on the city of Savannah. I’m sorry; that’s quite an understatement. “The Book,” as it is known locally, set Savannah’s tourism industry on fire and it’s still a hot place to visit. The Bird Girl statue was so sought out by book lovers that the family in whose cemetery plot she stood finally donated her to the Telfair Academy. Their dearly departed relatives’ graves were being trampled and the family wished to allow them to return to resting in peace and anonymity. We love that statue and actually have one in our garden, though ours is concrete, not bronze like the original. It’s easy to find in garden centers around these parts. The book, the city, and the cemetery all come together to serve up a Southern Gothic stew that is as thick and irresistible as a bowl of gumbo to a true Southerner. 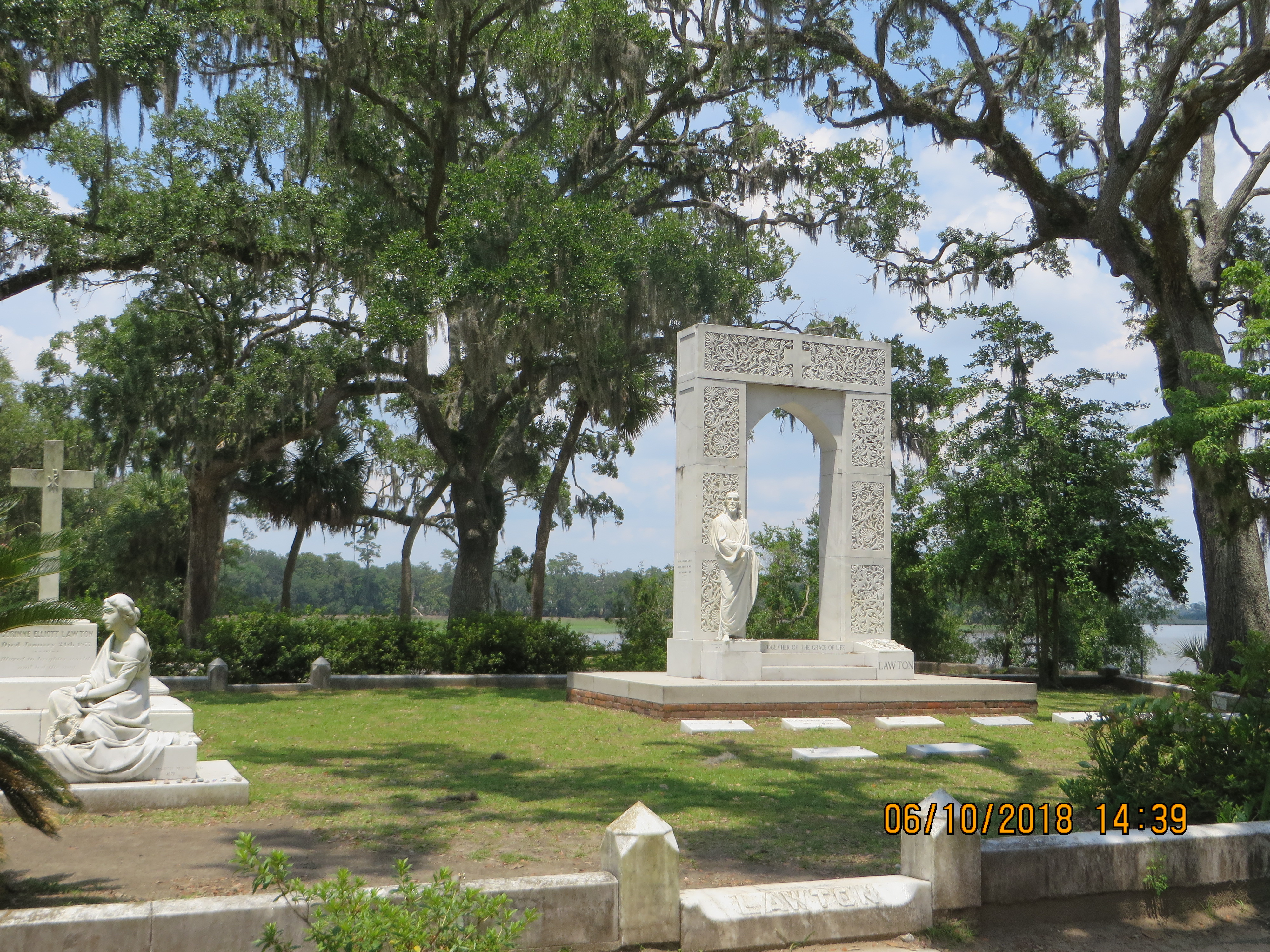 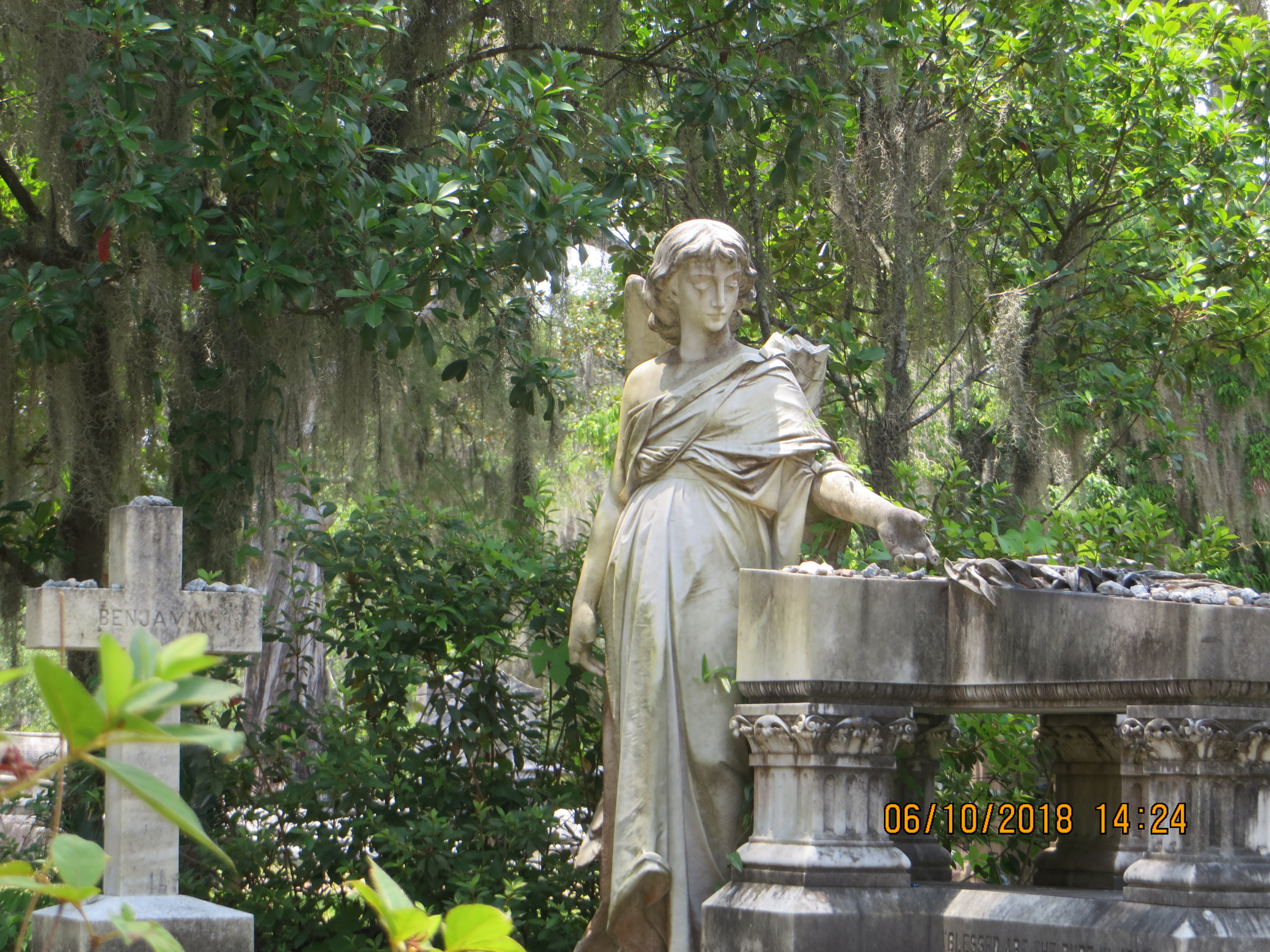 Although I have wanted to see the cemetery since reading the book, it has just been one of those things we planned to do “one of these days.” Today was that day. The impetus for our visit was the exhibit at Savannah’s Jepson Center for the Arts entitled Bonaventure: A Historic Cemetery in Art. 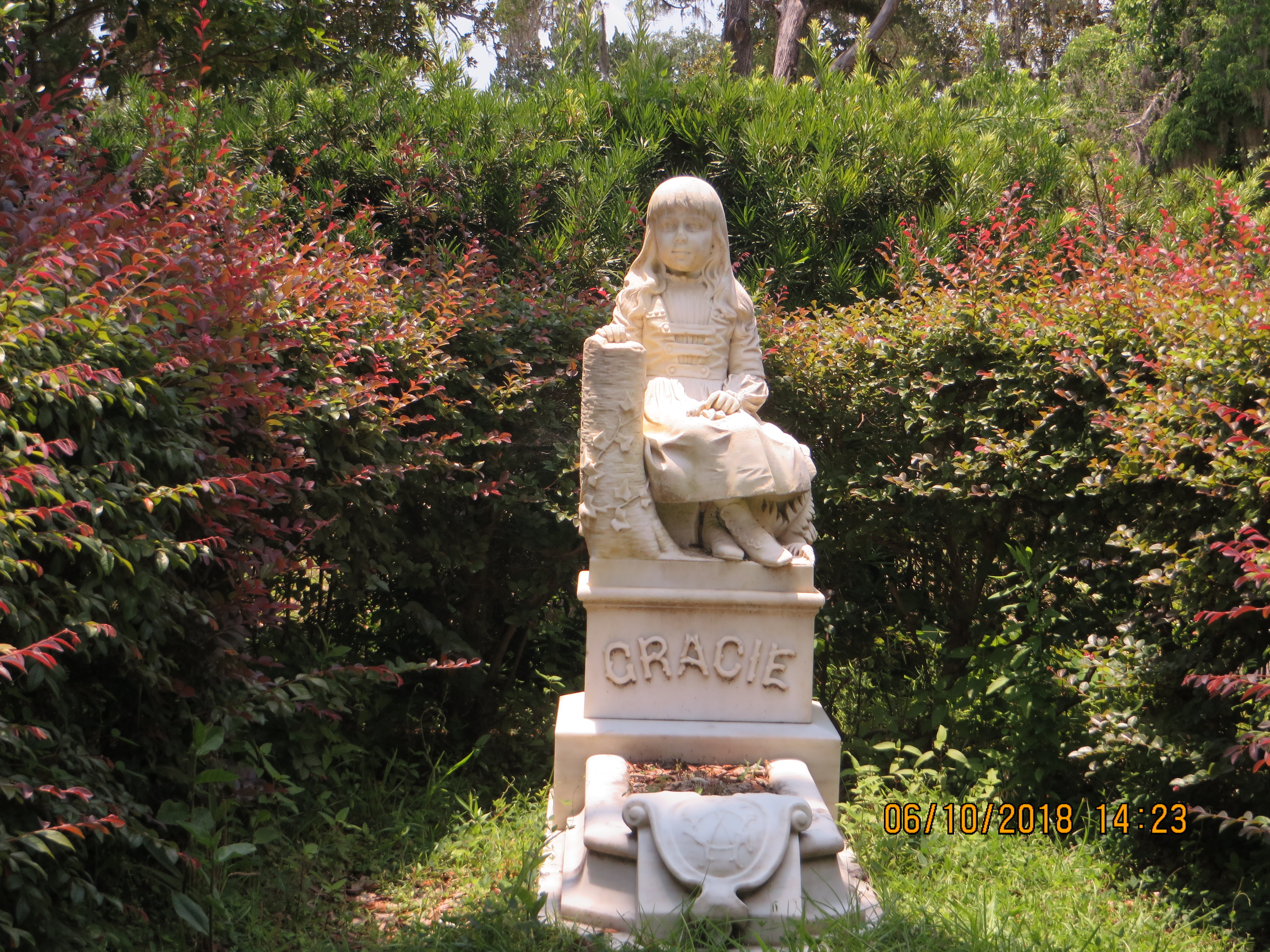 Gracie’s grave is one of the more famous at Bonaventure 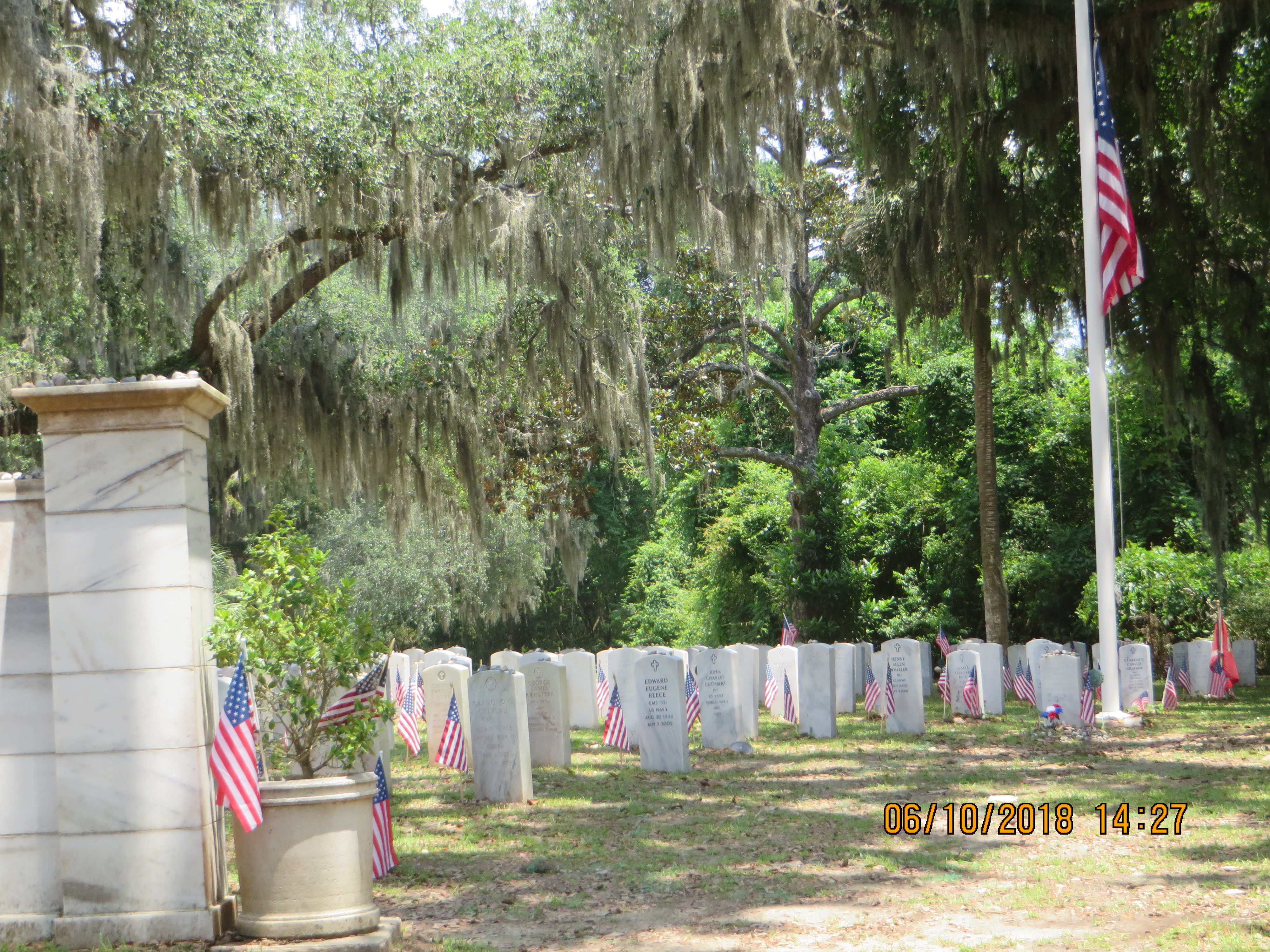 This section is reserved for those who made the ultimate sacrifice in WWI and WWII.

The land that is now Bonaventure was established as a plantation in the 1760’s but artists began flocking there as early as the 1830’s due to its incredible beauty. Like all plantations of that time period, there was a family graveyard on the property. Somewhere along the way, the plantation was shuttered and the area became known as Evergreen, a private cemetery, in 1846.  The city of Savannah purchased the cemetery in 1907 and it became a public cemetery.  A few decades later, the city annexed the Greenwich cemetery which was adjacent to Bonaventure. It is generally believed that Bonaventure is one of the most beautiful cemeteries in the United States, if not the world. (Weird, but now I would love to see a cemetery that is more beautiful.) Strange as it may sound, somewhere along the timeline of Bonaventure’s past, post cards were made with images from the cemetery on them.

Much of the attraction to Bonaventure comes from the funerary art credited to local as well as international sculptors. I do believe that there are more sculptures there than at Brookgreen Gardens, although the sculptures at Bonaventure are, of course, funereal in nature. You will see many angels, obelisks, urns, crosses, and stars of David there, whereas at Brookgreen you will see more animals and nymphs. Savannah’s well-heeled citizens in mourning were able to order Italian-made sculptures from a catalog and have them personalized upon their arrival in Savannah.

Another reason people are drawn to Bonaventure is that famous people have been interred there when they passed over to the “other side.” The graves of Johnny Mercer and Conrad Aiken are well marked and there were plenty of curious visitors when we stopped by. The moss-draped live oaks and allees add to the beauty and tranquility of the cemetery which is located on a scenic bluff overlooking the Wilmington River. 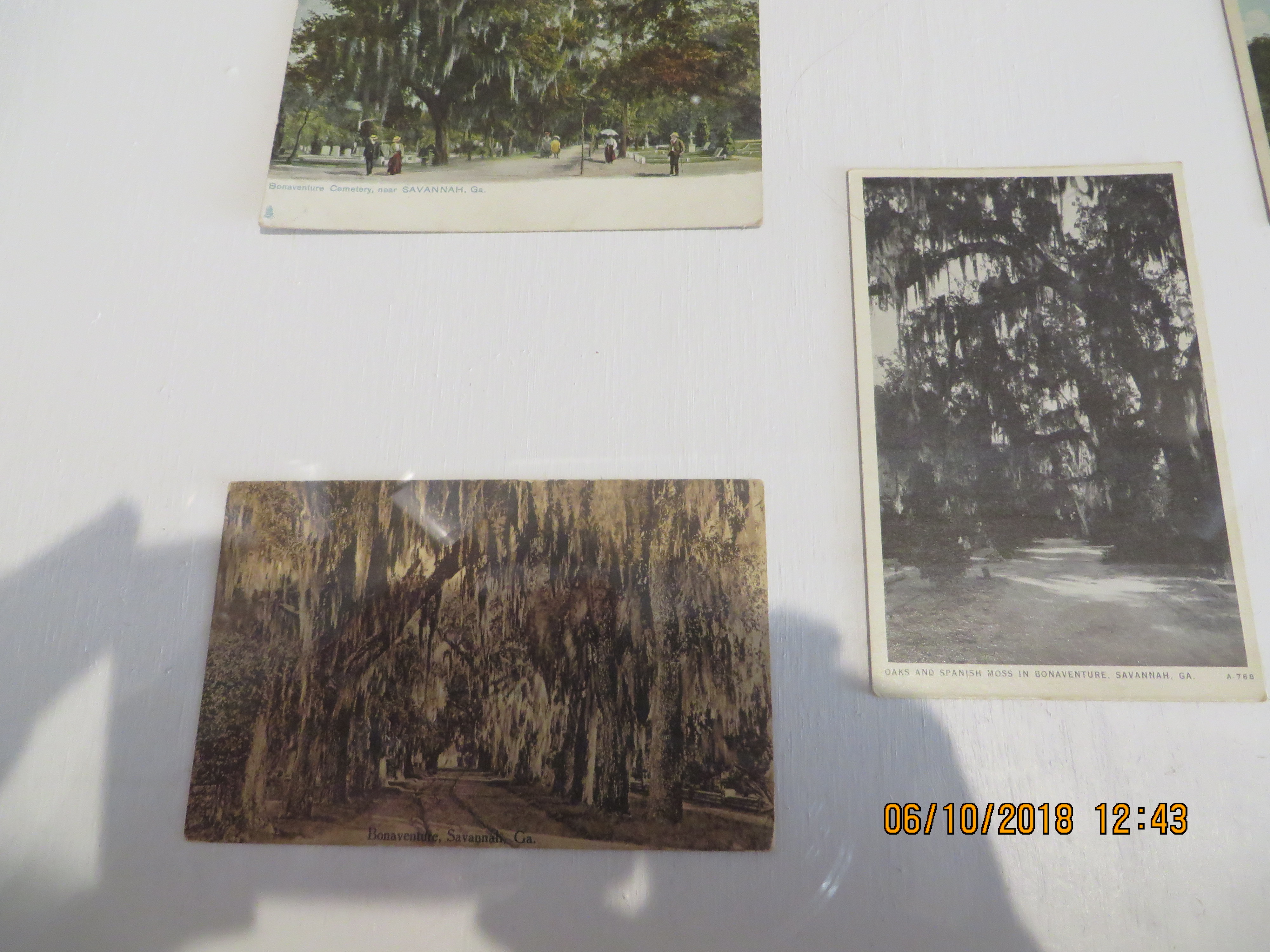 Imagine sending a post card with a photo from a cemetery! 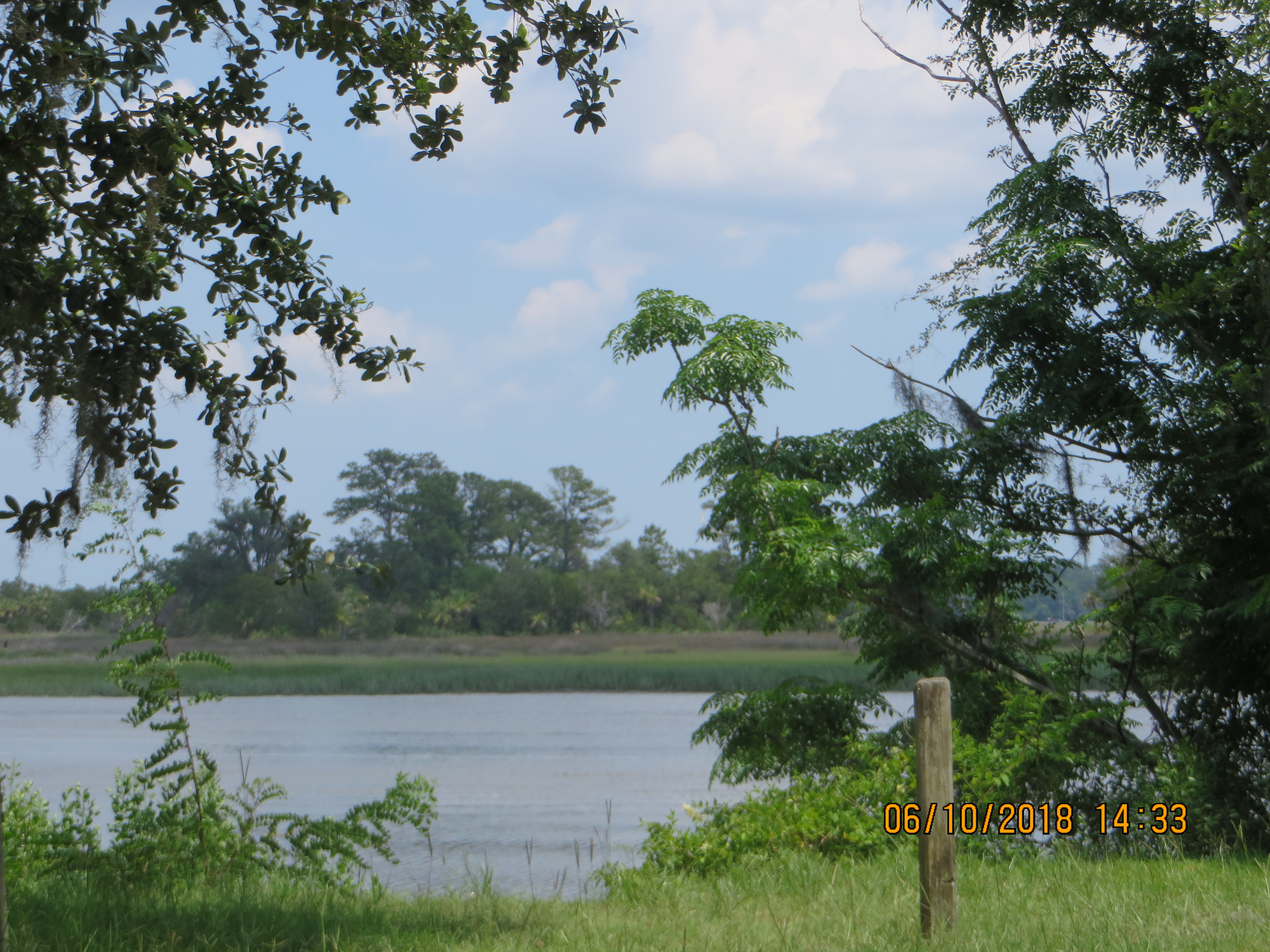 The view of the Wilmington River from Bonaventure 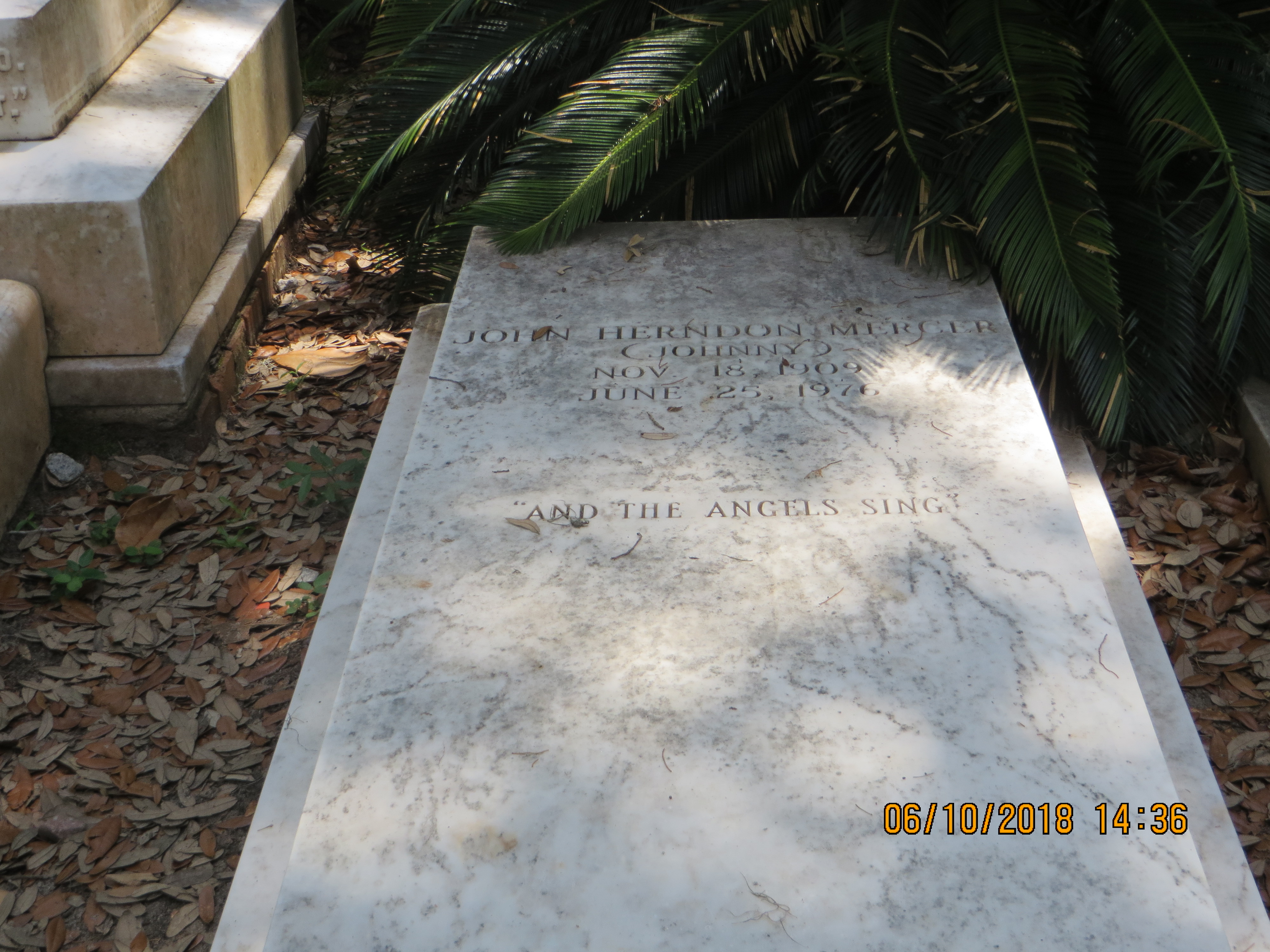 Above and below: photos from Johnny Mercer’s burial site 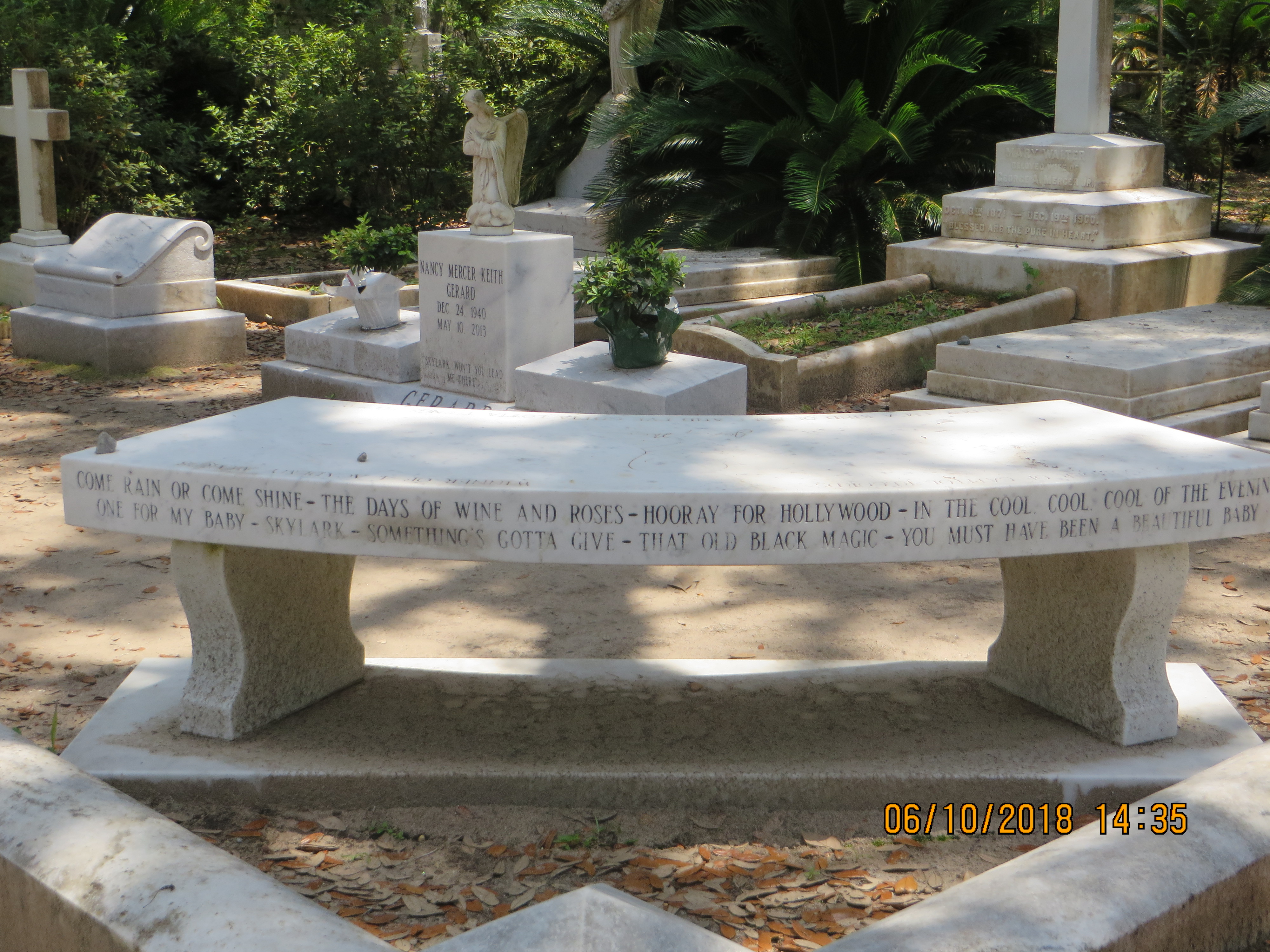 John Muir’s words are a perfect description of Bonaventure. There is an unmistakable feeling of complete peace there. Burial plots are still available and I know it would be corny to say that people are dying to get in there, so I won’t say it. I will say that it is a beautiful place and that I am dying to read that book again. I have no doubt that we will make another sojourn to Bonaventure after we re-read the book. My only regret is that it took us so long to get there. I am so glad that we decided to travel locally more often.