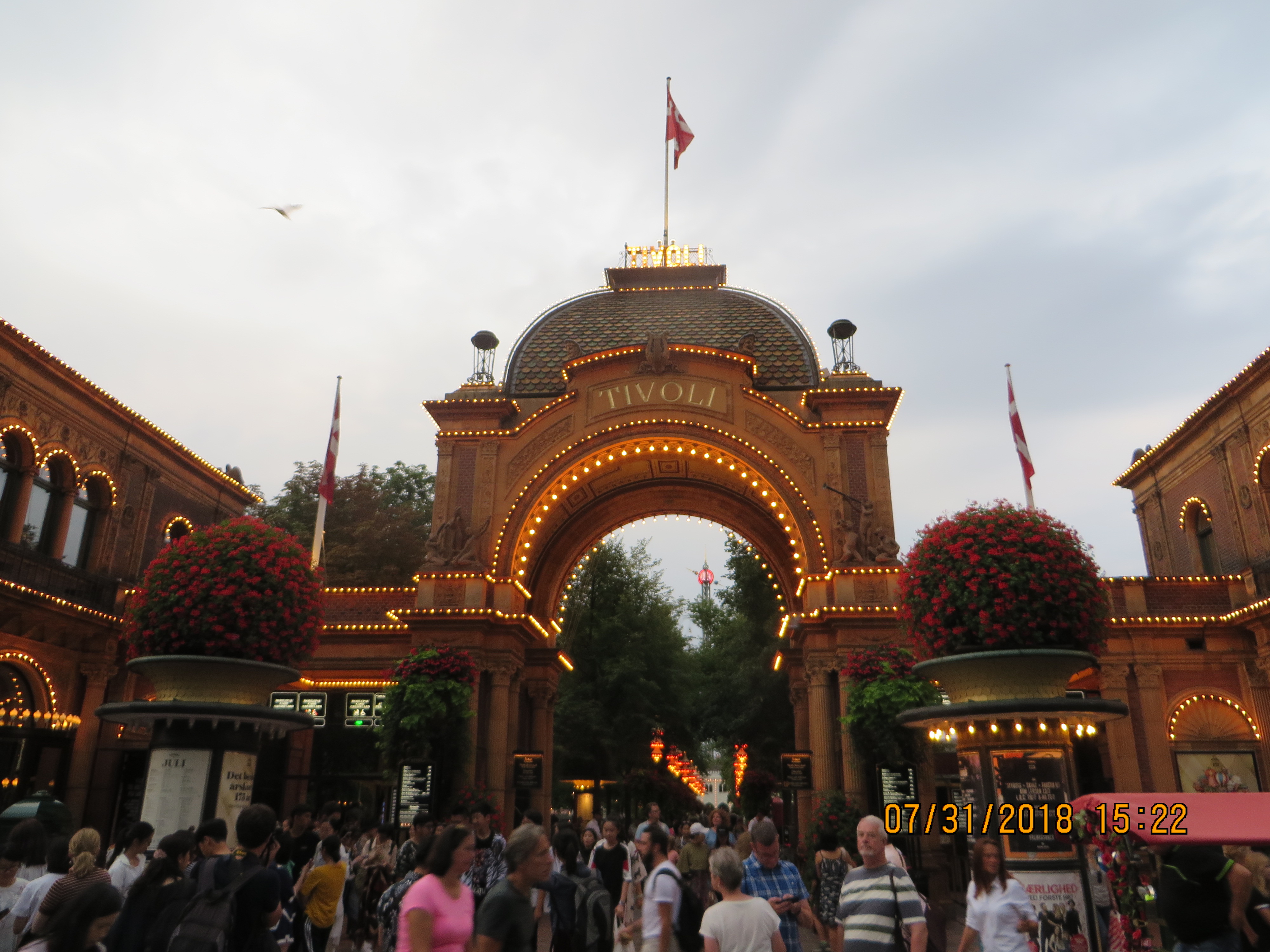 Tivoli Gardens reminds me of the Prater in Vienna. Way back in the mid-1990s, we spent a day there. I remember two things about that day: the incredible Ferris Wheel, the iconic symbol of Vienna, and the Weiner schnitzel. The children were about thirteen years old and Michael was on a quest to find the best Weiner schnitzel in Austria. He decreed that the clear winner was at the Prater, which one would think an unlikely destination for culinary excellence. I remember thinking, “Wait! What? The best Weiner schnitzel is at an amusement park?” I hate to admit it, but he was right. You have to believe me, it was not “fair food” as we know it. The restaurants in parks like the Prater and Tivoli are permanent fixtures, unlike the fly-by-night trailers that line up just outside the midway of the South Carolina State Fair for a few weeks in October and employ legions of sketchy looking carnies to keep the fryers bubbling.

Wow! I swerved completely off topic from the get-go, didn’t I? OK, so I’ll get back to Tivoli Gardens. The above title of this post was swiped from their website and it perfectly describes the park. It never stops changing. Tivoli is not just an attraction for tourists. The citizens of Copenhagen love it, too, so it has to keep evolving to keep locals from getting bored with it. The park and gardens really seem to have something for everyone. Over four and a half million visitors passed through the turnstiles in 2017. Having opened in 1843, it is the second oldest operating amusement park in the world. Originally, Tivoli was outside the city, but the city grew and surrounded the park so that now it is in the middle of Copenhagen. Rumor has it that Georg Carstensen convinced the king to allow him to open the amusement park and garden by making the case that, if the people were having fun, they would not pay so much attention to politics. Hans Christian Andersen was among the first guests and Tivoli supposedly inspired him to write one of his most famous fairy tales, The Nightingale. Many years later in the early 1950s, Walt Disney visited Tivoli several times and was similarly inspired. He loved the mood and atmosphere at Tivoli and sought to replicate that ambiance at Disneyland when the gates opened in California for the first time in 1955. 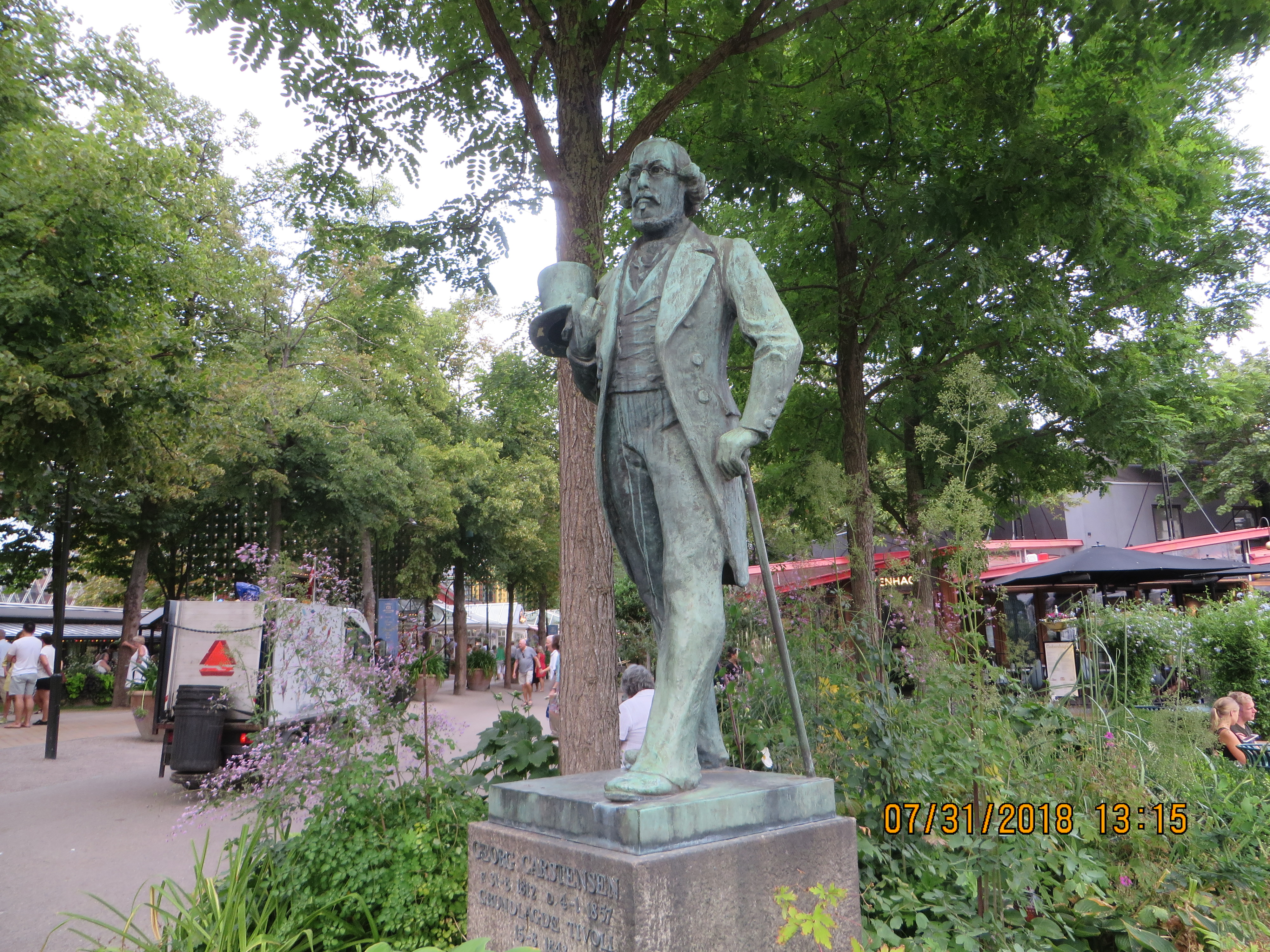 Just as the Prater has its Ferris Wheel, Tivoli has its iconic wooden roller coaster known as Rutschebanen. This jewel in the crown opened in 1914 and is one of the world’s oldest wooden roller coasters still in operation. Rutschebanen is one of only seven rides in the world that has an operator on each and every train to hit the brakes as needed to keep the ride from going too fast as it traverses the course. There is a newer roller coaster, the Demon, that looked positively terrifying. Below is a picture of Rutschebanen, followed by a photo of the Demon, living up to its name. 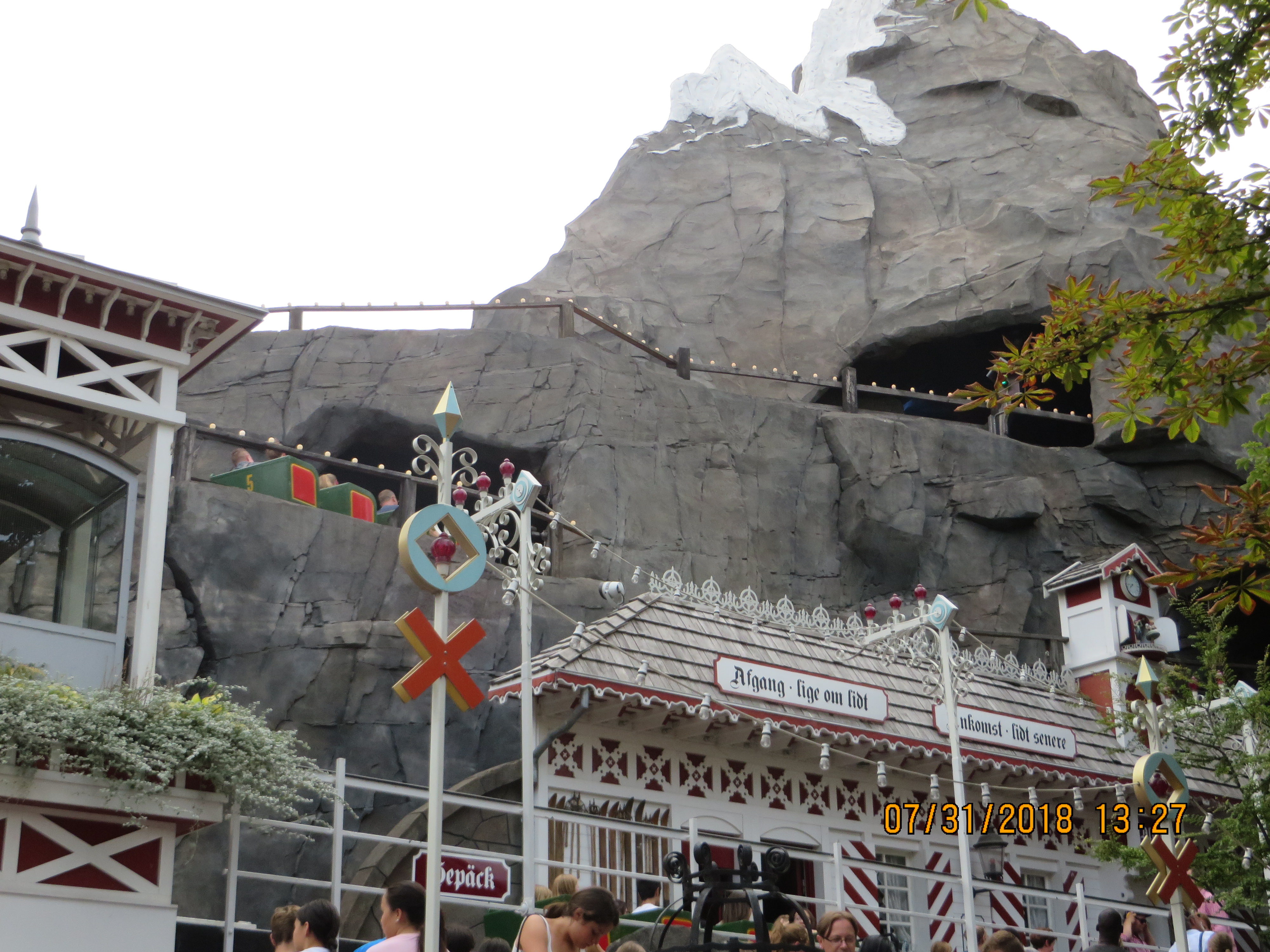 Tivoli is lovely during the day, but it really sparkles and shines when the sun goes down, which is very late this time of the year. Since we were there yesterday, on the evening we flew into Copenhagen, we found ourselves totally out of sparkle and shine around 8 PM and could not stay until 10-10:30 PM to see the park after sunset. I am sure it is a magical place late on a beautiful summer evening. I can’t imagine how incredible it looks during the Christmas season. I bet the Halloween/Harvest display is pretty awesome, too. Sadly, we won’t be able to experience Tivoli Gardens in the fall. We will have to settle for a Polish sausage and funnel cake from the South Carolina State Fair and let our imaginations go wild. There, we cannot ride the Rutschebanen, but as everyone who has ever spent a little time at the SC State Fair knows, at least we can “meet at the rocket.” 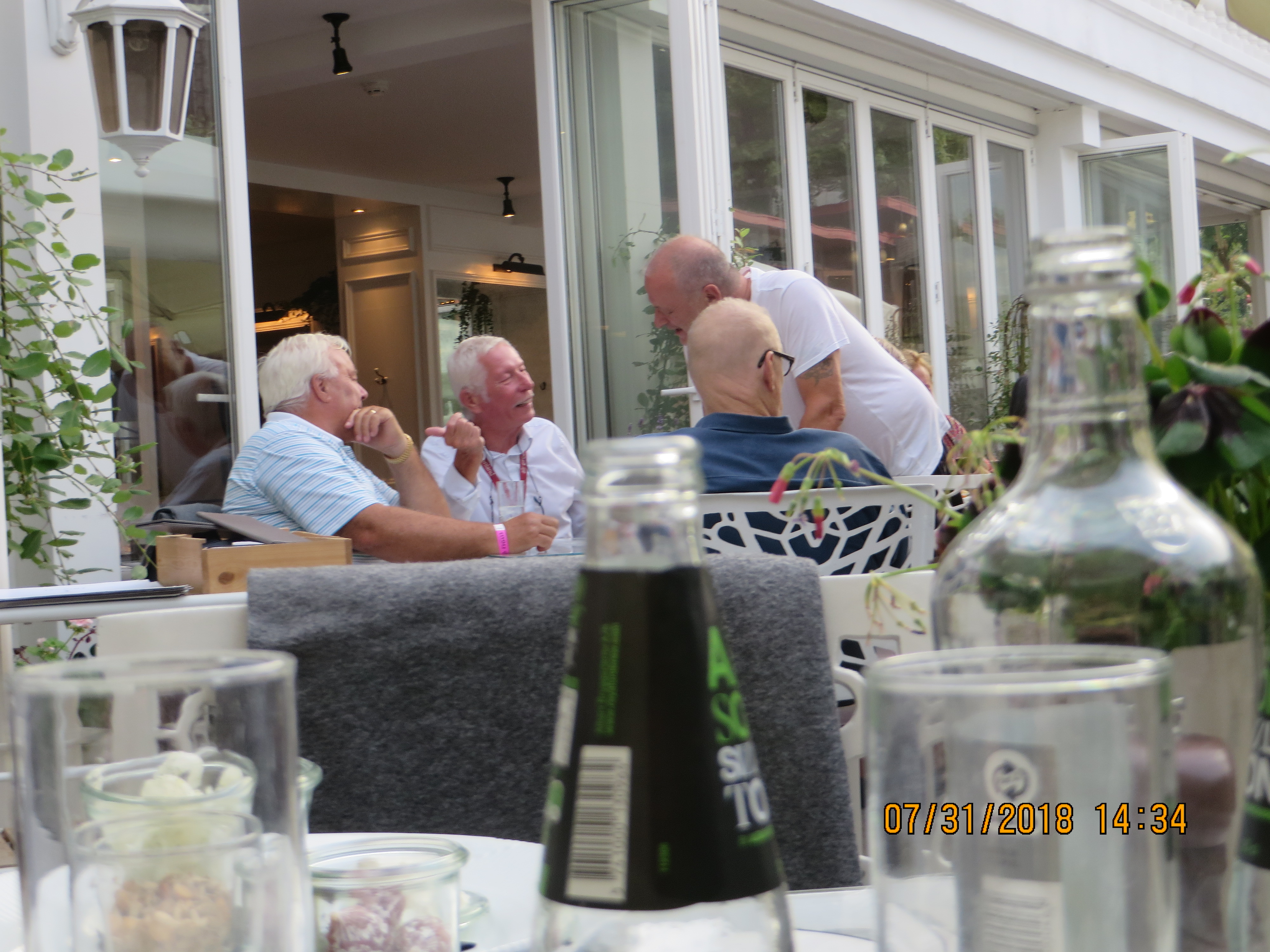 Locals enjoying one of many restaurants in the park. 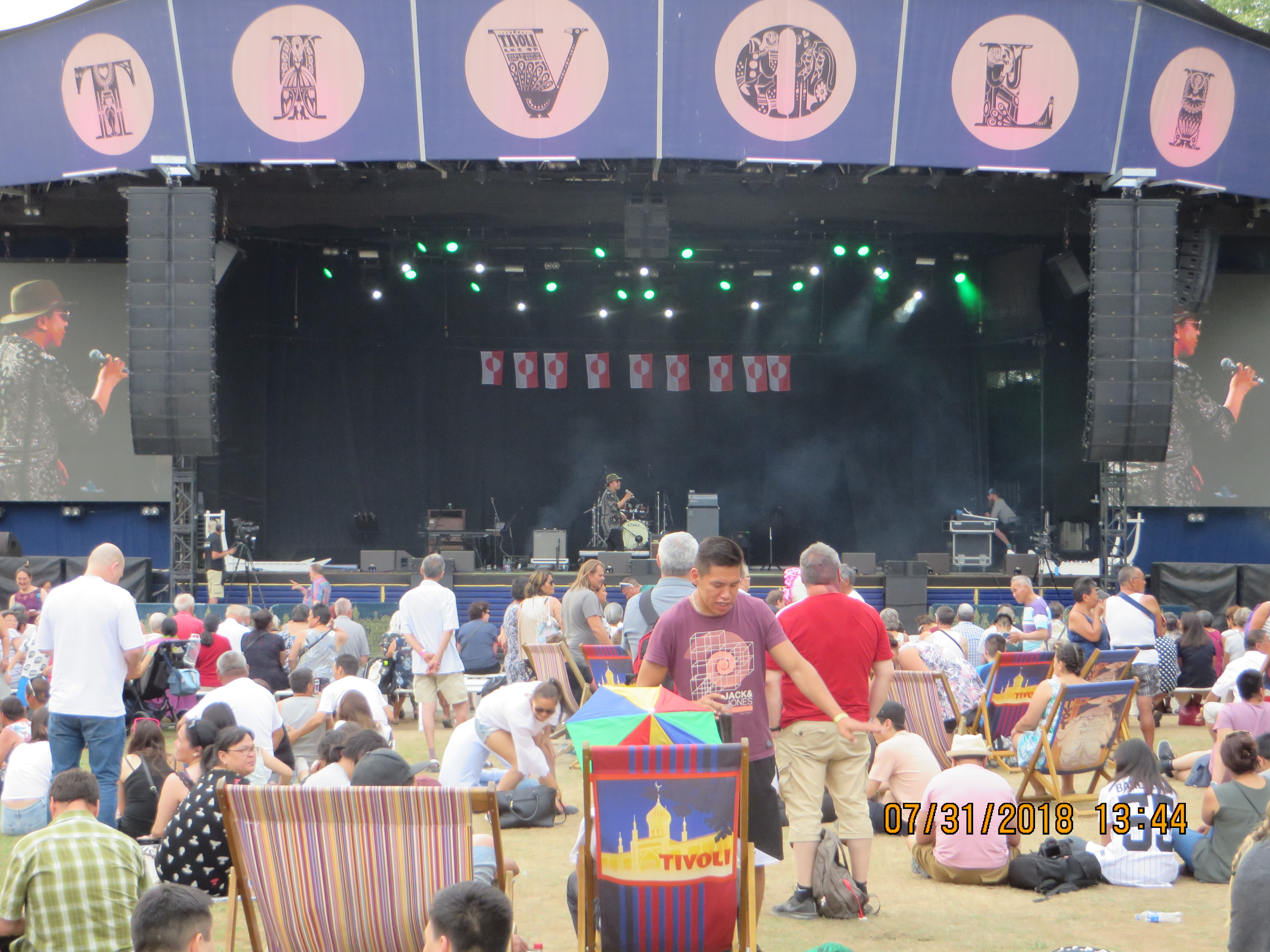 A band from Greenland was playing on the open-air stage. I had forgotten that Greenland is part of Denmark. 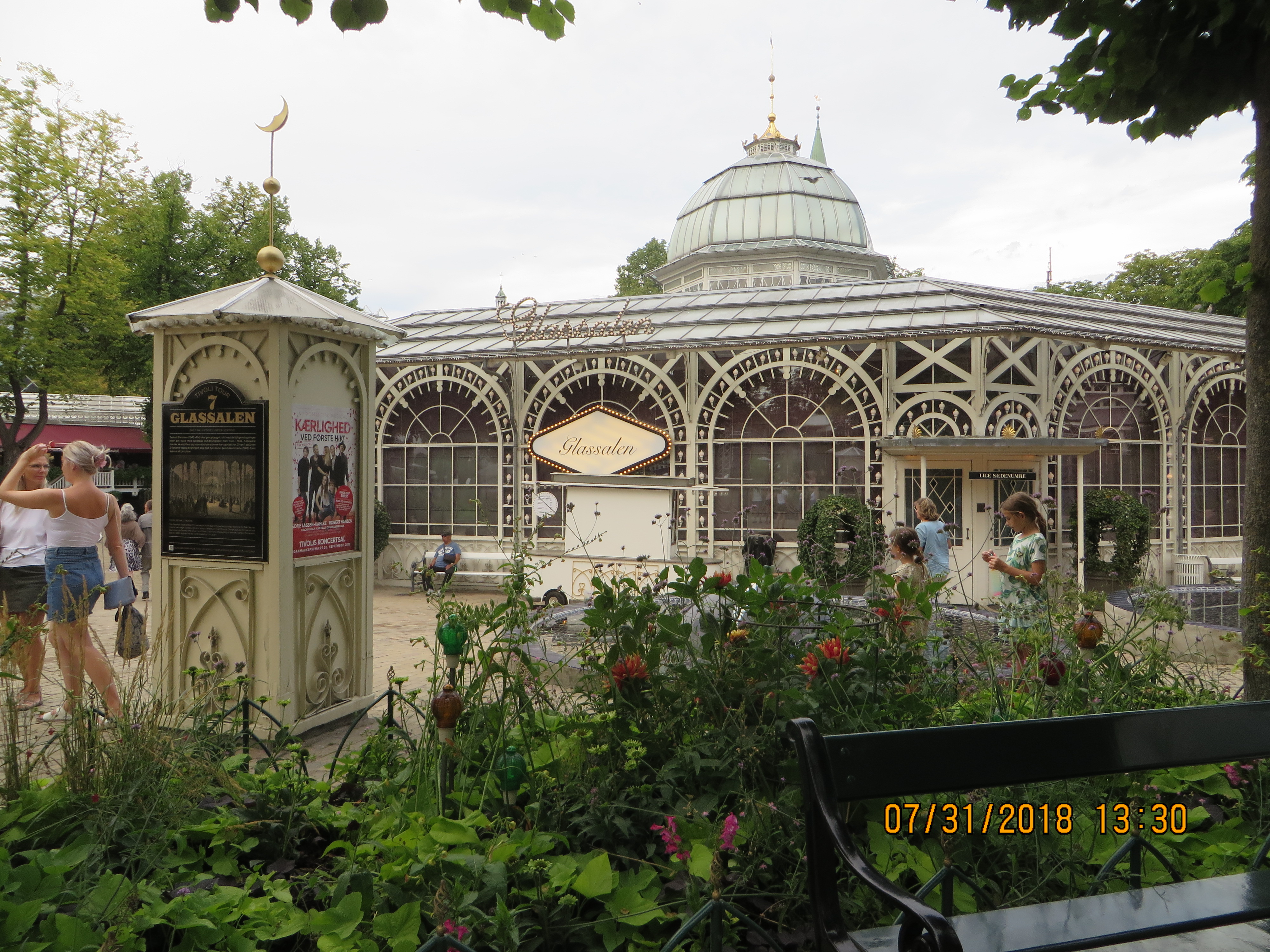 The Tivoli Glass Hall. Bonnie Raitt performed Tuesday evening at one of Tivoli’s many venues. 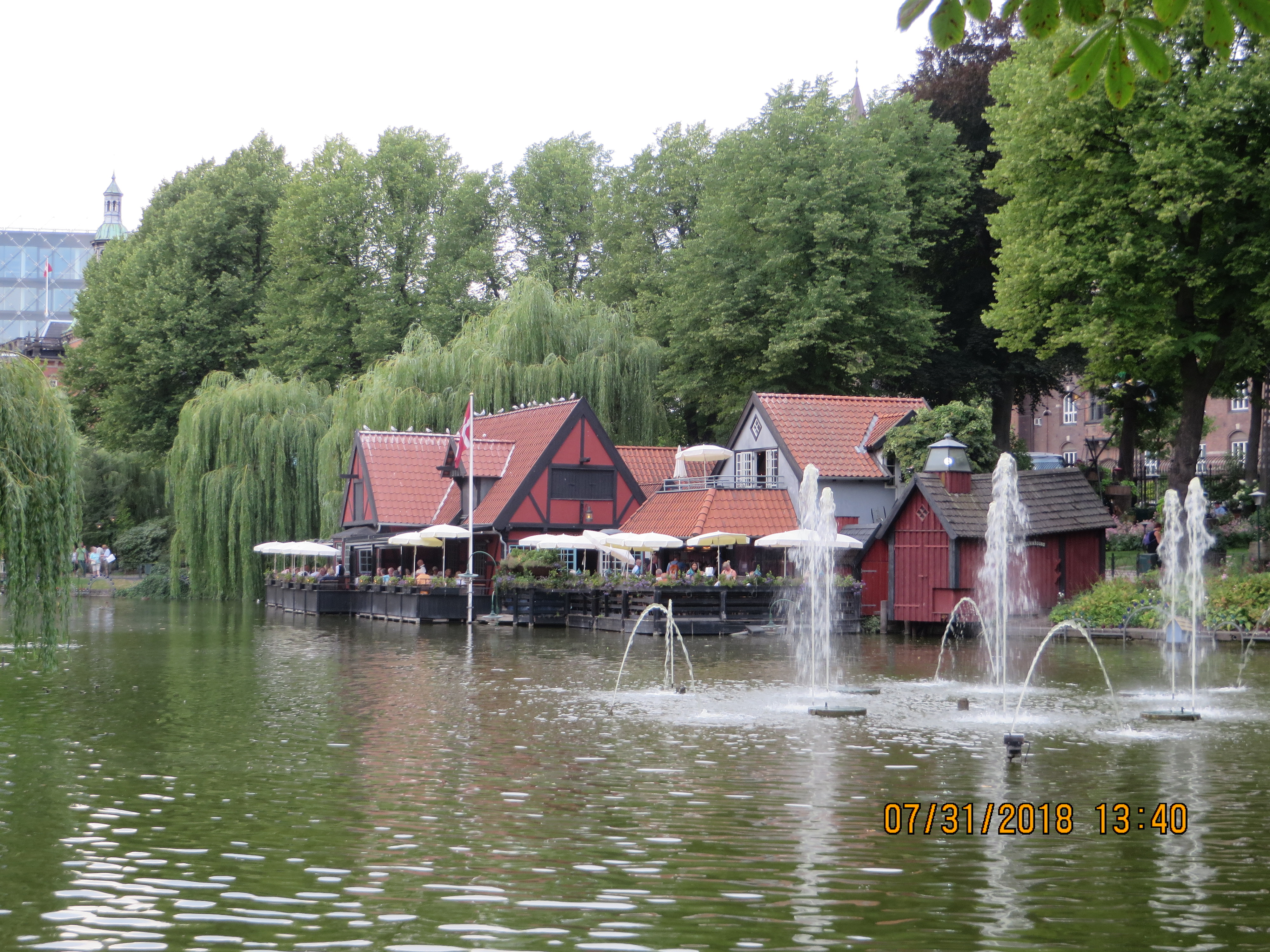 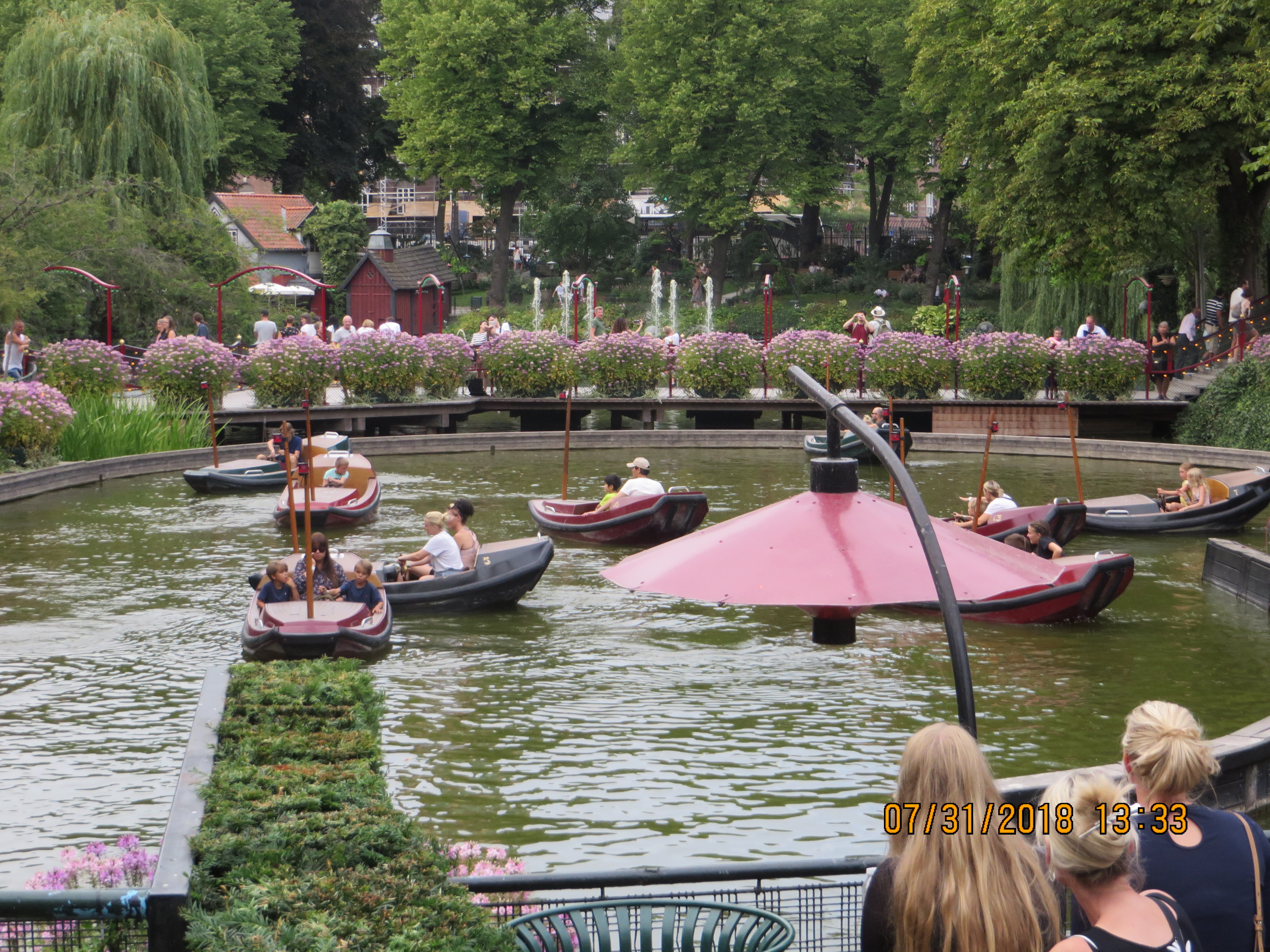 I don’t know what to say about this picture. I have mixed feelings. It looks like such fun, but I know better. I’ve found that pedal boats aren’t nearly as much fun as they look like they will be, but that may just be me. It’s like finding out, sadly, that you are in a spinning class when you thought you were just out for a good time. 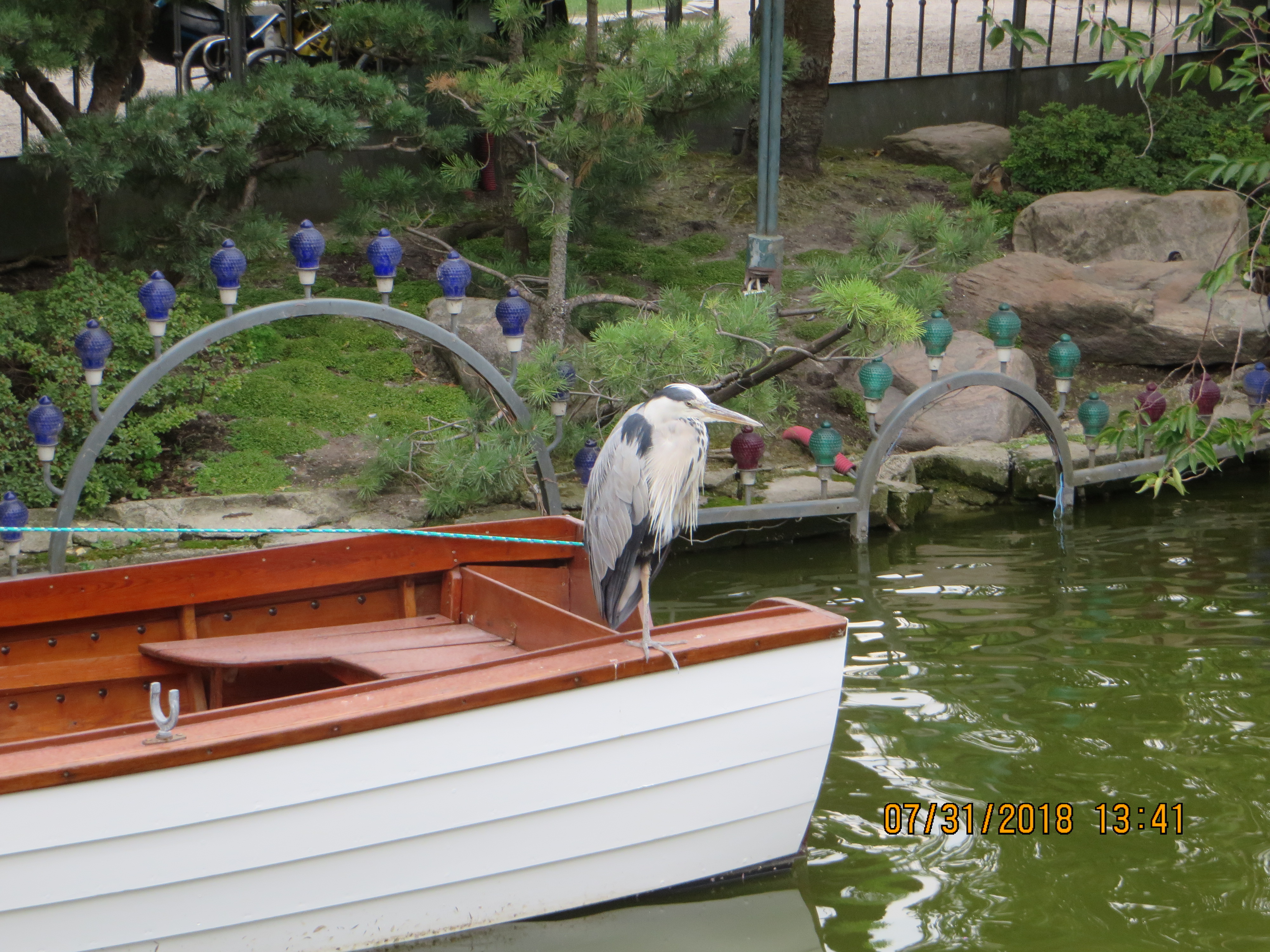 Another local hanging out in the park. 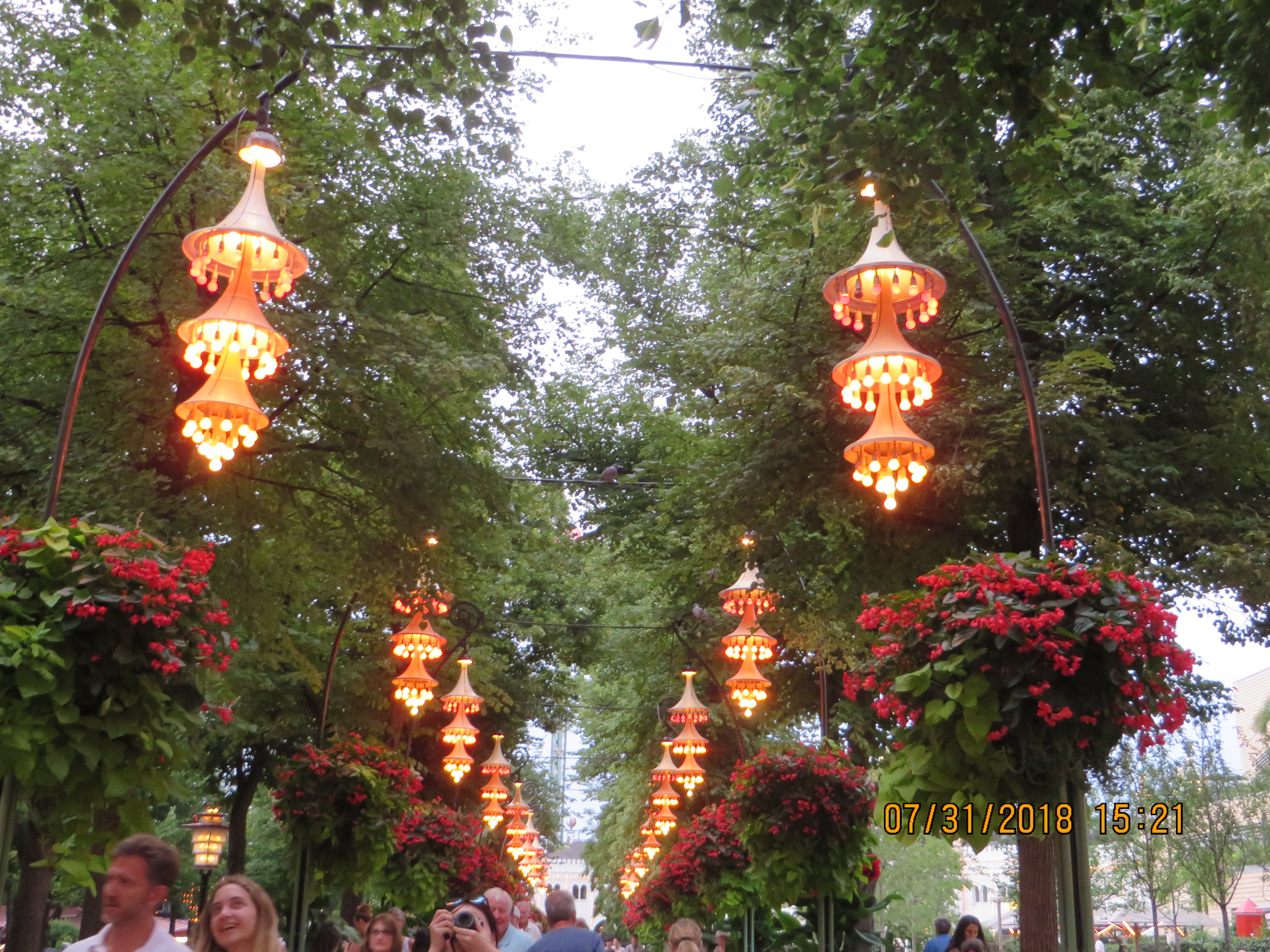 The park was beginning to light up the night as we left.