About one morning every week, my inbox greets me with an email from Pinterest. “We found 18 travel pins that might be right up your alley,” it proclaims. That Pinterest—always thinking of me. Needless to say, I click immediately. That’s when the trouble starts. I cannot even begin to list all the places and things we have seen because Pinterest kindly made a suggestion. Off the top of my head, I recall the day spent in Sintra, just outside of Lisbon. Probably one of our favorite days in Portugal. Then there was the journey from London to Kew Gardens to see the giant water lilies, Victoria amazonica. And Lake Bled in Slovenia! What a wonderful adventure. I could go on, but you get the picture. Pinterest is a troublemaker. I am a totally innocent bystander.

When the Navigator went gliding into the port of Stavanger, Norway this morning, I had an agenda, thanks to Pinterest. Must see Pulpit Rock and must see the Three Swords monument. It was rainy and cool, but no worries. Fog, on the other hand, could be a major problem. Another monkey wrench in my plans: to see Pulpit Rock, we needed to take the boat ride into the fjord; to see the Three Swords, we needed to catch a ride out of town to a little inlet and park. We had originally signed up for the boat ride on Lysefjord, so we stuck with that plan, but before we arrived, I started trying to figure out a way to get to the Three Swords. Yesterday afternoon, I went to the Destination Services desk and asked the nice young man if we could go on the excursion to the monument. He said that it was “at capacity,” but that he would gladly place us on the wait list. I asked him to put us at the top of the list and assured him that we would not tell a living soul. I laughed, he laughed; he thought I was joking. I was dead serious. I hoped for a phone call all evening, but the phone never rang.

This morning, I read somewhere that we could take bus #26 out to the site. Problem solved! I excitedly reported my findings to Rick.  Ever the practical one, he asked how we would return. Such a party pooper. I had no idea and was forced to abandon that option. I went back to the Destination Services desk this morning and had a nice converstion with a lady from the local tourist office who came onboard to answer questions. I explained our dilemma. She suggested that we take a taxi, but pointed out that it would not be inexpensive. Oh, well, we won’t be back, so let’s do it, I say! Problem solved (for real)!

When we returned from the fjord boat ride, Rick suggested that we make one last attempt to get on the (free) cruise line excursion. It was raining, so we were sure lots of folks would opt out at the last minute. We were searching around the ship for their meeting place and ran into the local tour guide again. She was leaving the ship and asked if we had connected with the group. We told her that we were still trying to find them. On an apparent whim, she offered to take us to the Three Swords monument since her shift at the tourist office was finished for the day. This was an offer we just could not refuse and soon we were zipping through the town of Stavanger in Lila’s little blue car getting the full blown tourist guide spiel. Apparently, it’s hard to “clock out” if you are a tour guide and there are tourists within earshot. We were more than fine with that.

Lila drove us to the monument and waited patiently in the rain while we made photographs from every angle. Then she took us back via the scenic route, giving us more fun facts and figures about the town. Lila was born in Stavanger. She showed us her grandmother’s home and where she lived as a small child. She was a delight. As we gathered all our belongings and exited Lila’s car, Rick offered to pay her, an offer she gratefully accepted. 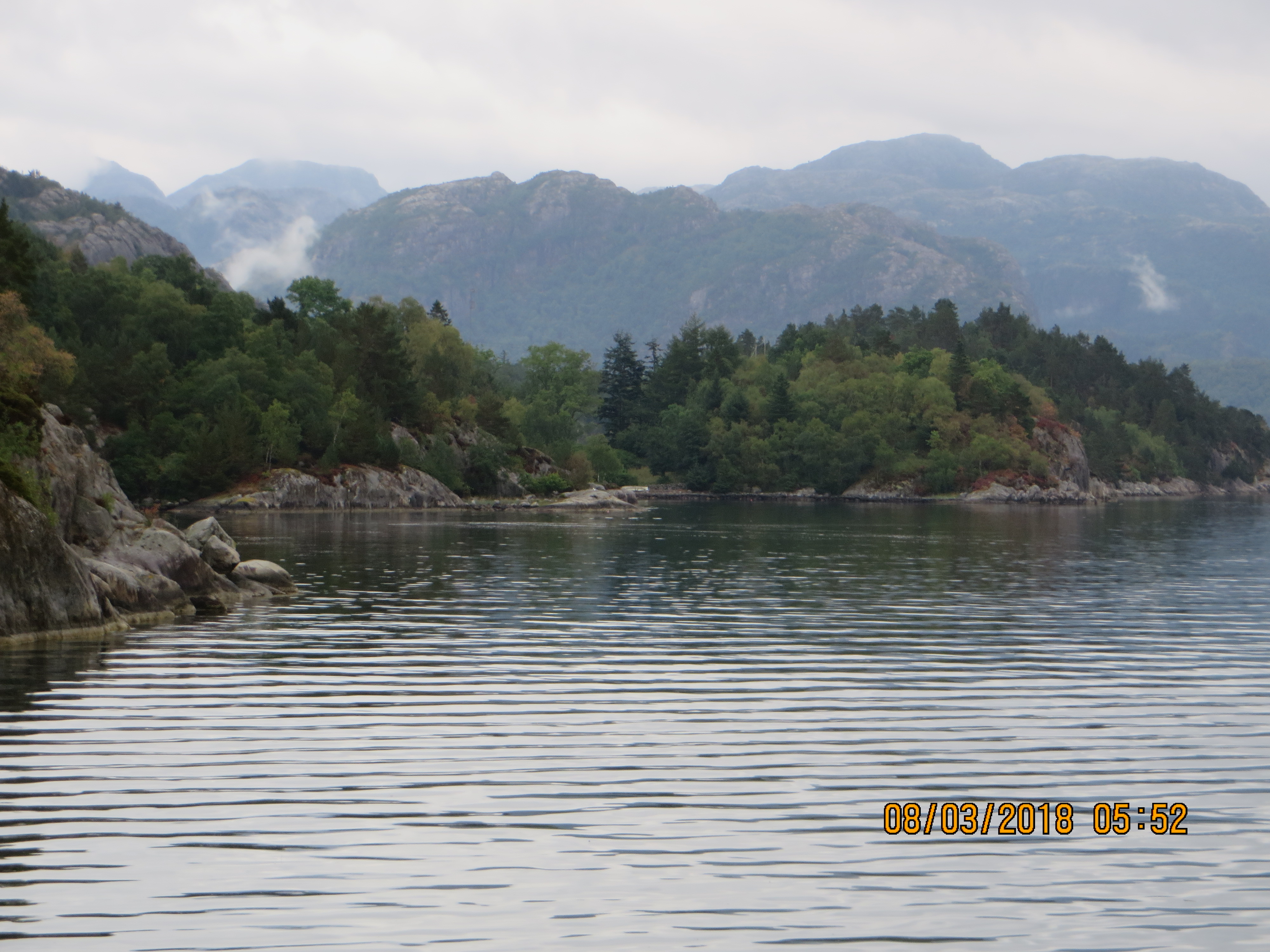 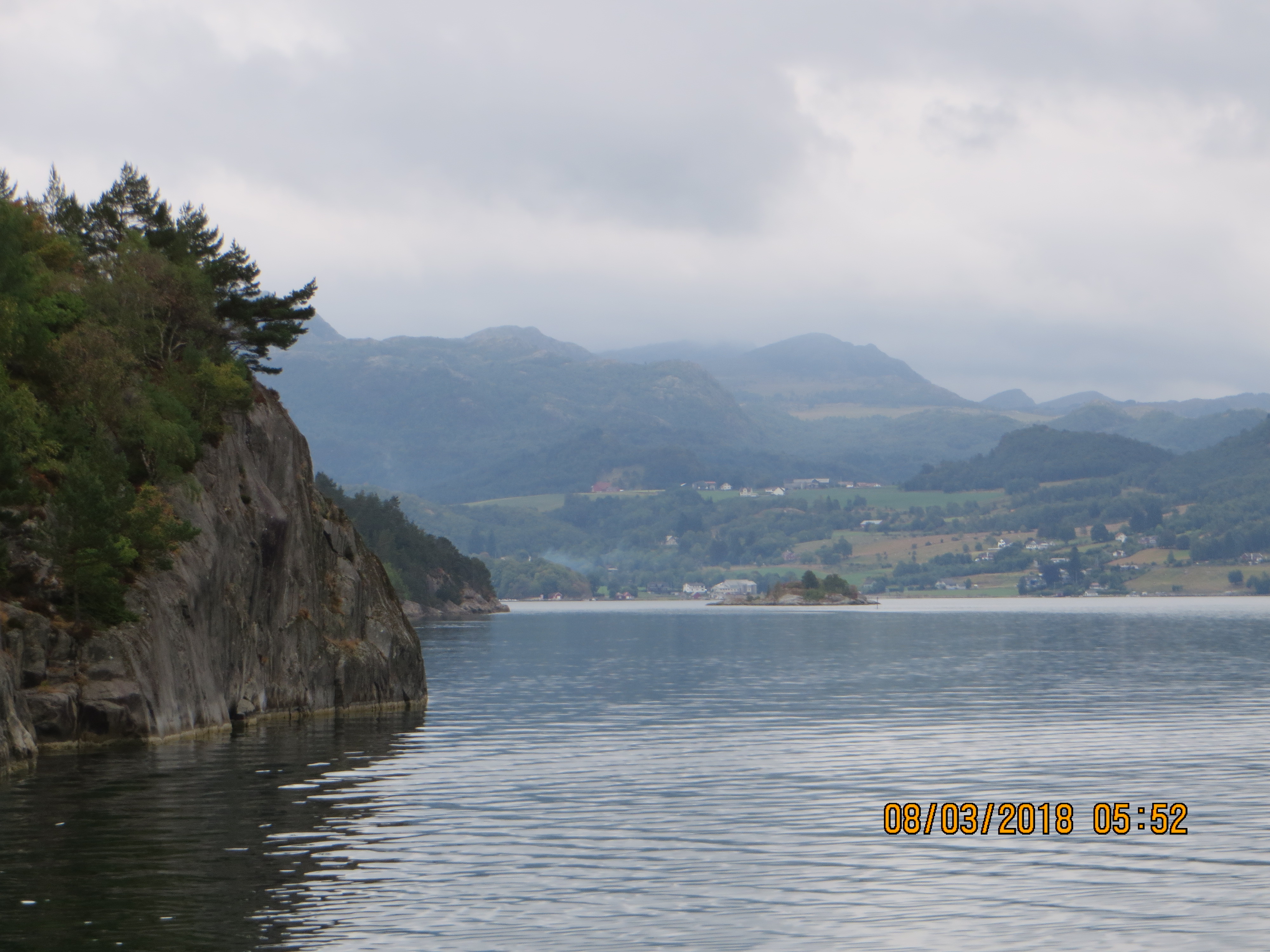 Exactly the same weather as when we were in Milford Sound in New Zealand, also a fjord. Better not take the Lawsons when you visit a fjord; that would cue the clouds, rain, and fog. 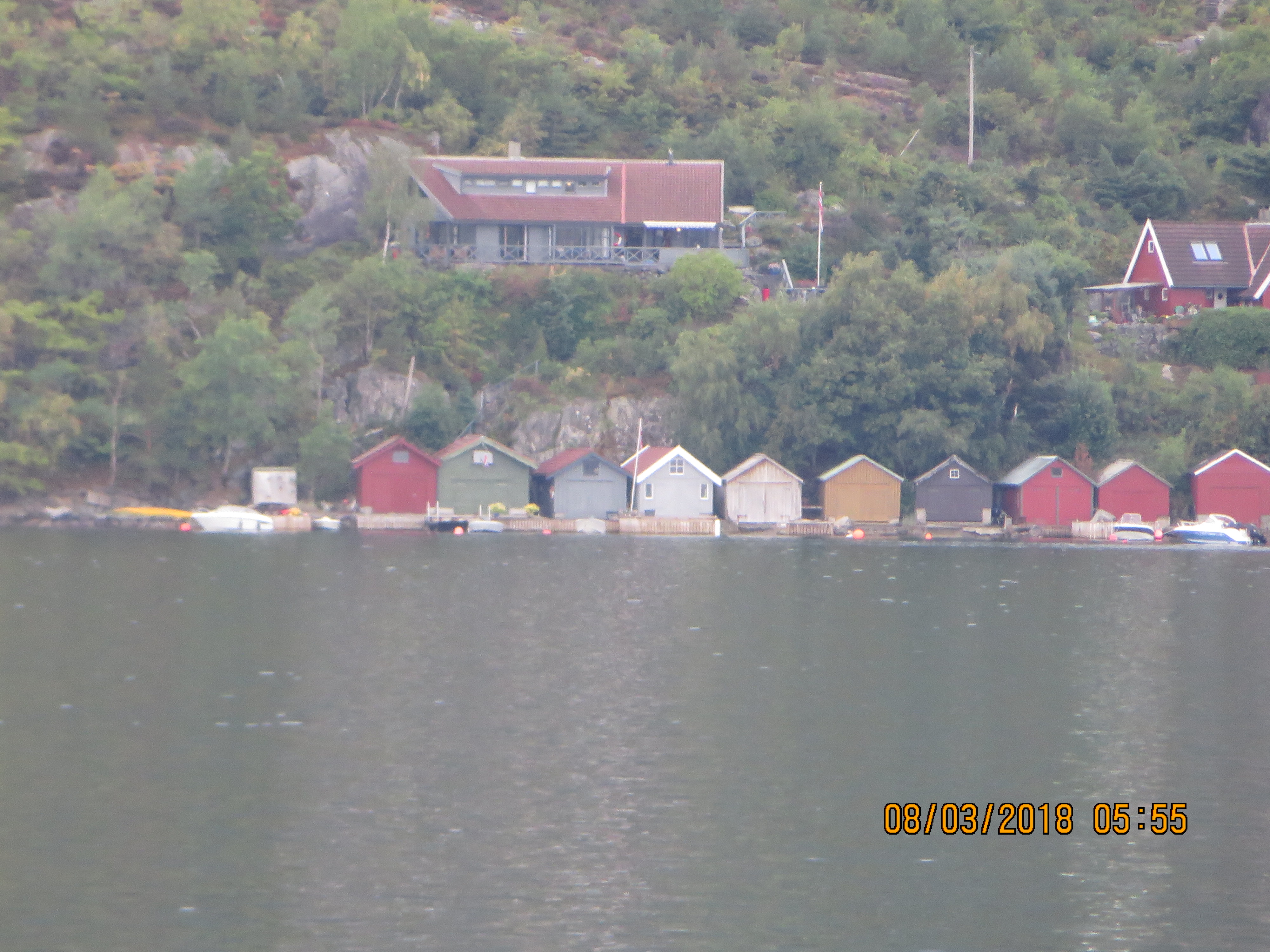 Norwegians sure do love their boathouses and so do we.

Very friendly goats, probably friendly only because the boat’s crew threw bread to them. 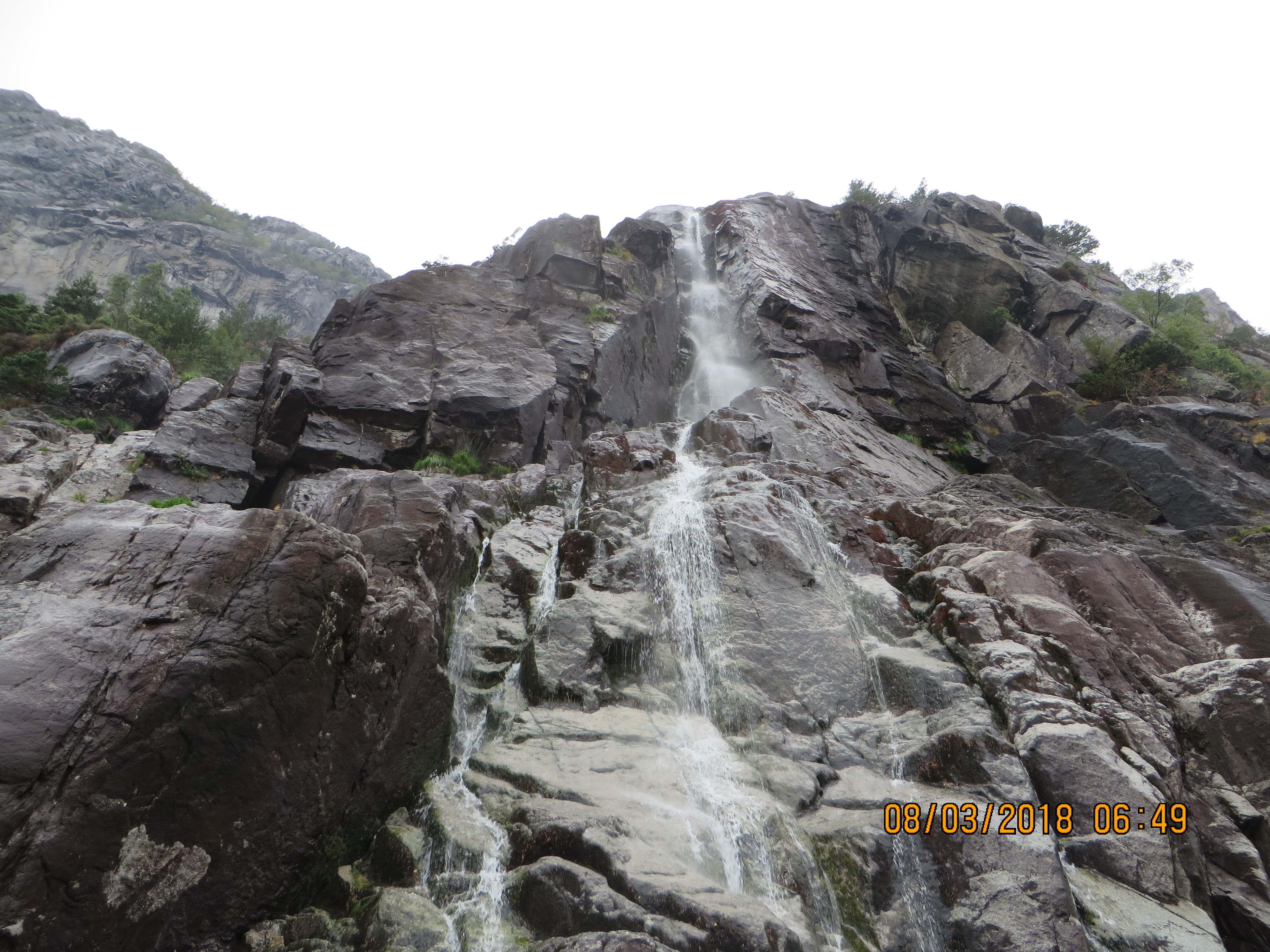 This waterfall was apparently only a trickle days ago. (Before the Lawsons brought the rain.) 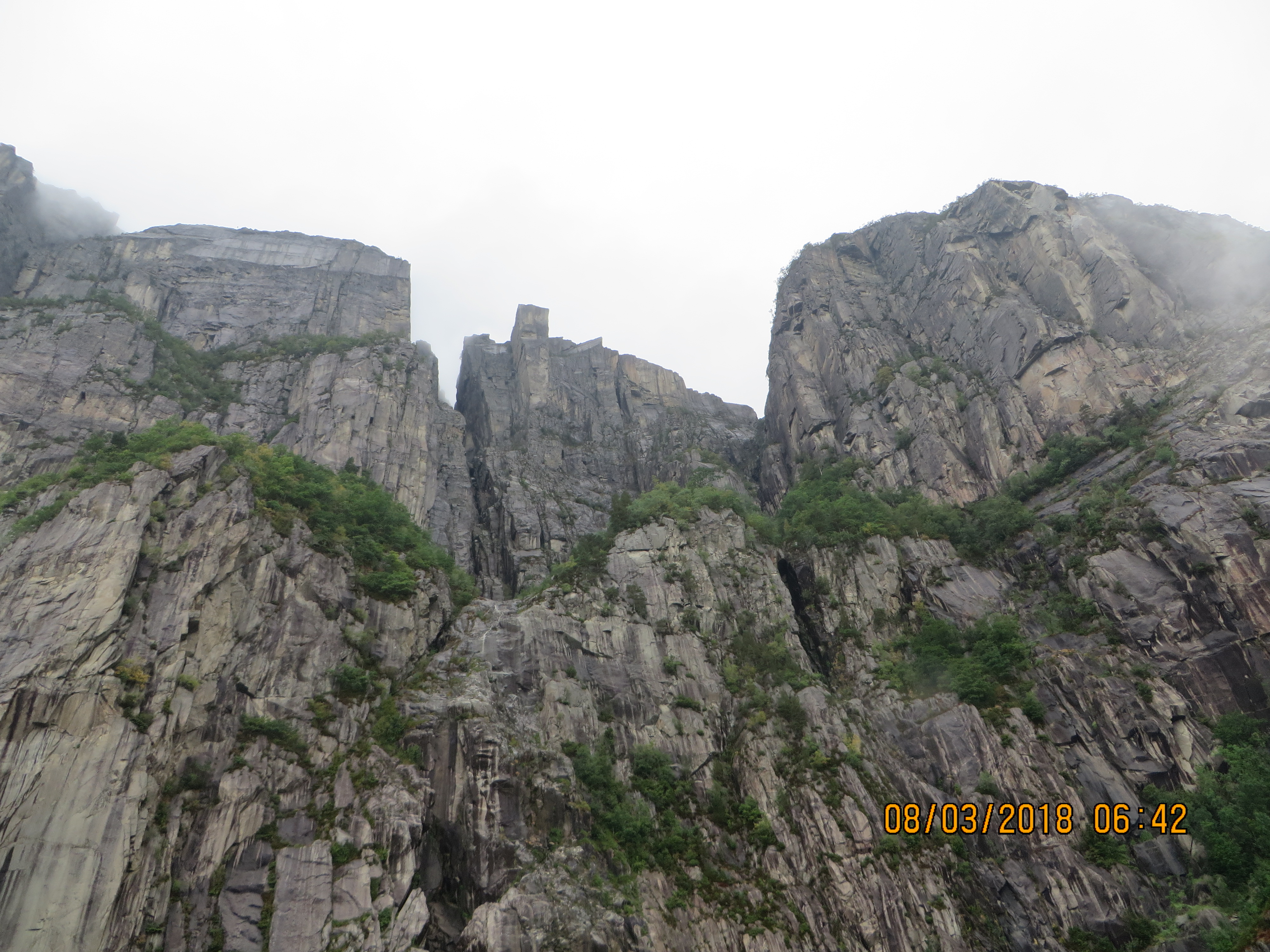 Pulpit Rock—it will fall when seven brothers marry seven sisters in the same district. Probably fairly safe to be around it. 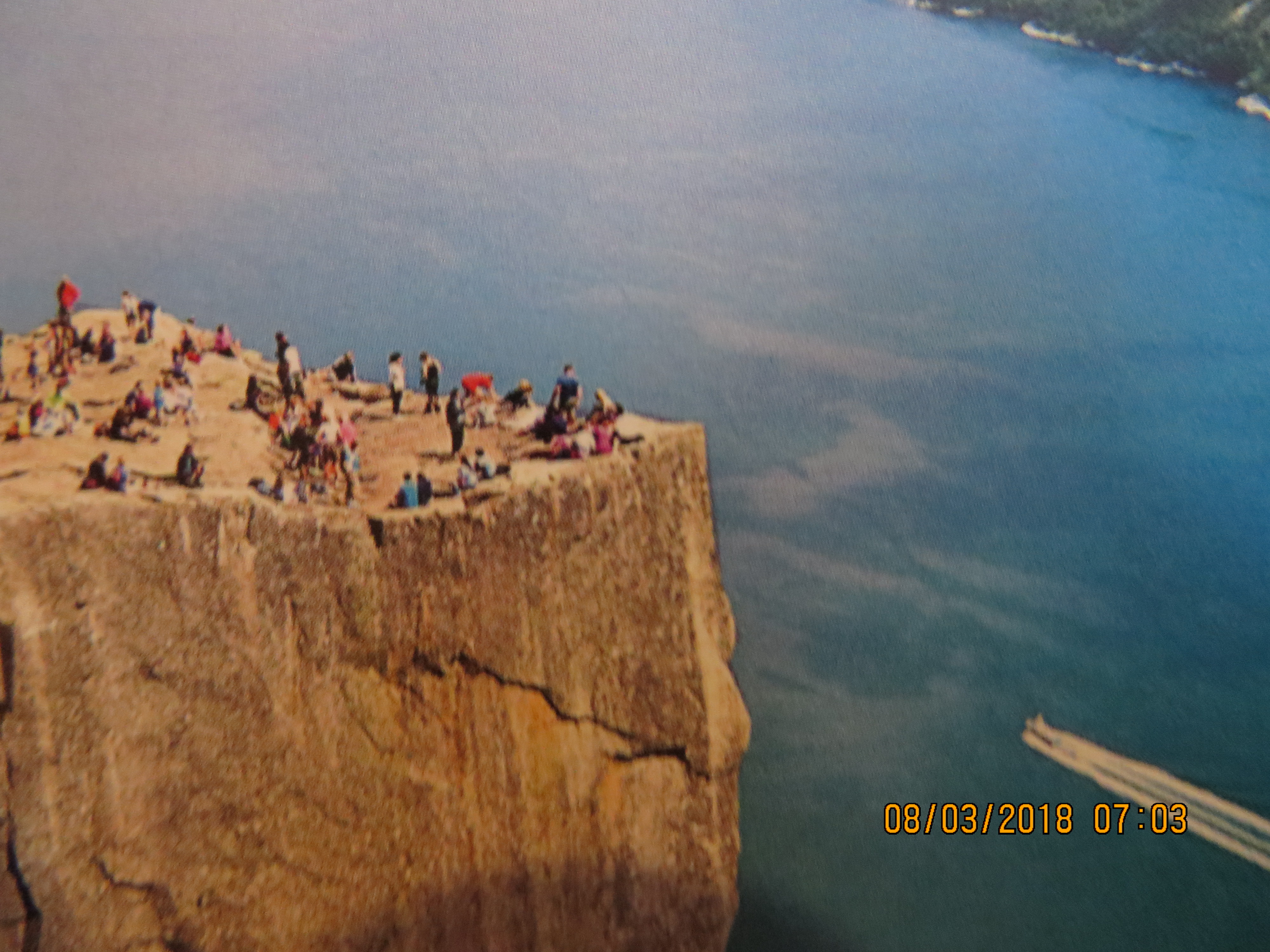 Pulpit Rock from above. We did not take a helicopter; I photographed a brochure—much less expensive and safer. 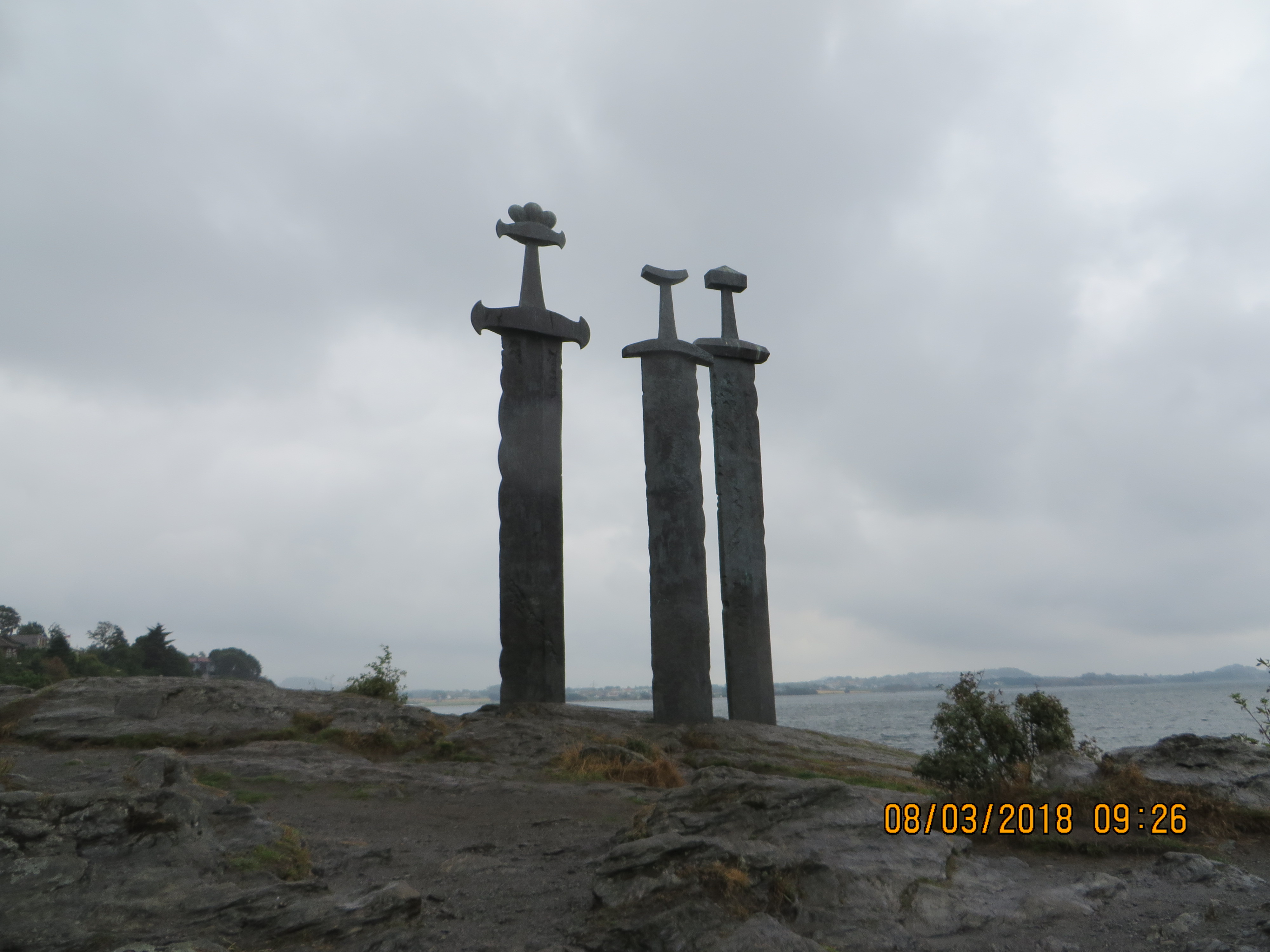 Three Swords—this monument brings out the Viking in everyone! 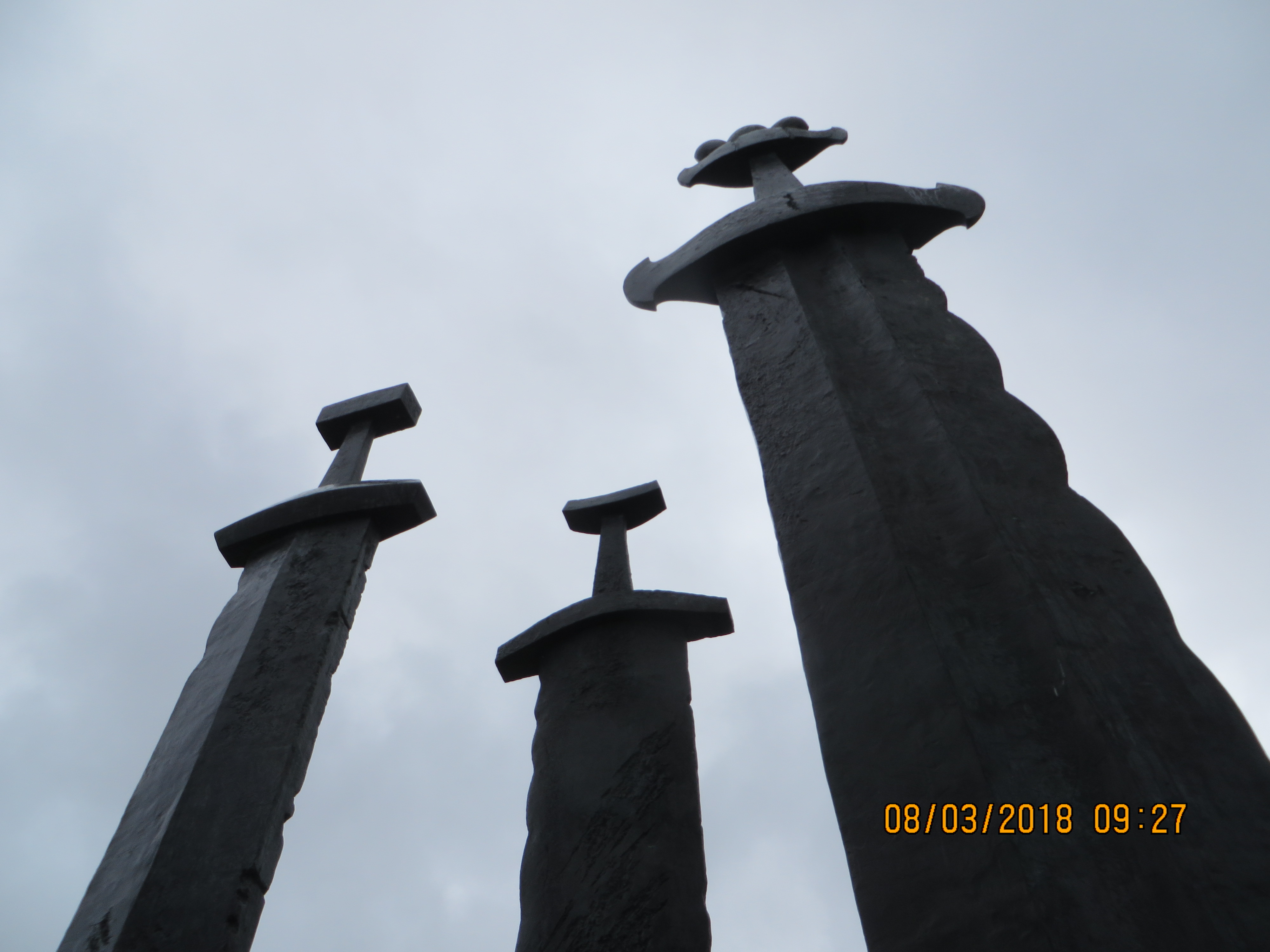