Taking a Twirl on the Devil’s Dance Floor

Our ship was the sixth and last cruise ship to tie up at the dock at Murmansk, Russia this year. Although it is not quite mid-August, here summer has peaked and fall is around the corner. It is true that this port is ice-free all winter, thanks to the gulf stream, but it is nontheless a rather inhospitable tourist stop. Bleak doesn’t even begin to describe this city, especially on a rainy afternoon. Below is the scene we captured from the window of the coach. It pretty much tells the story of Murmansk. 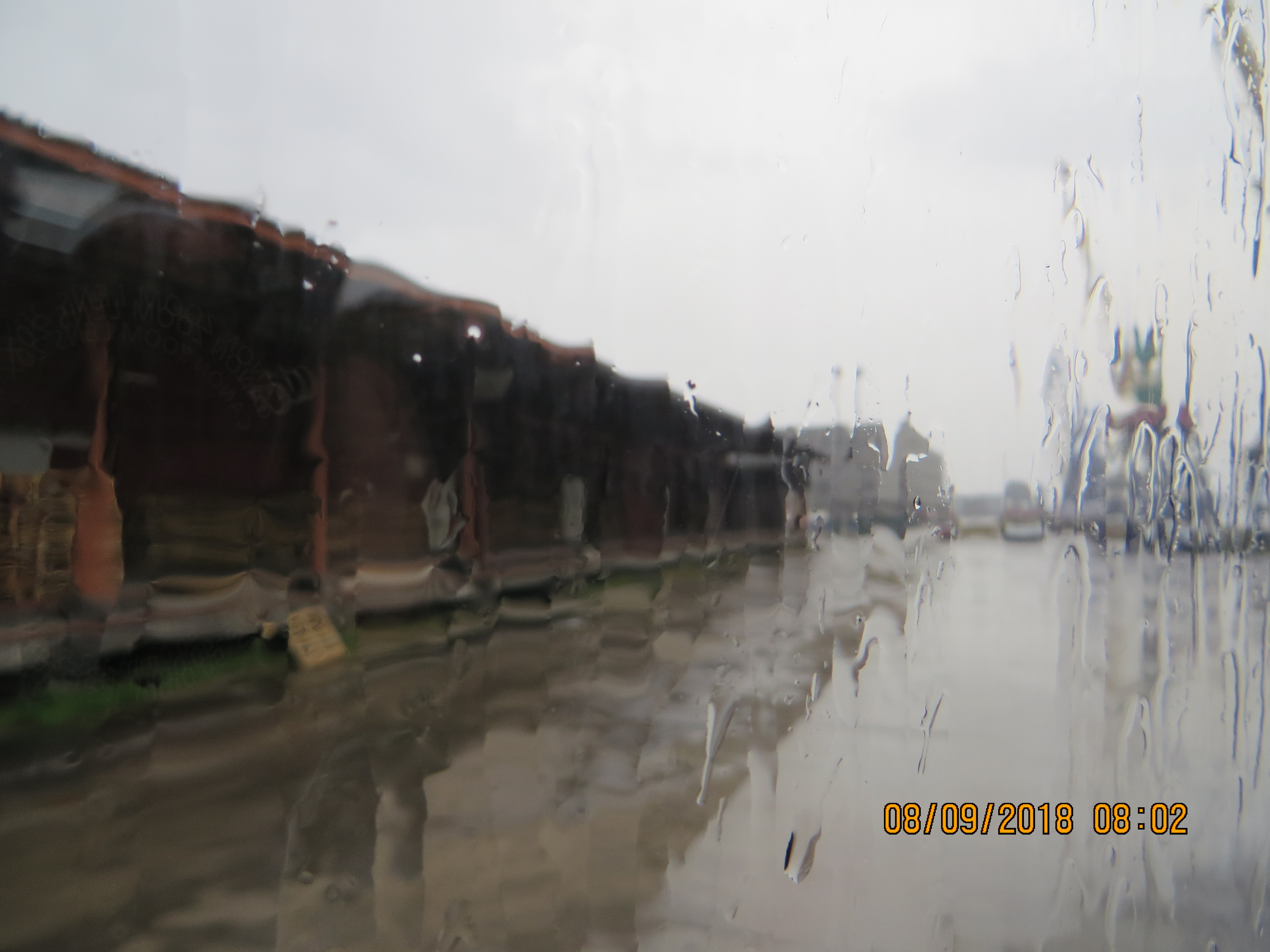 I read somewhere that they had refurbished the port facilities to welcome cruise ships. To that, I say, “Fake news!” We have never seen such a dreary point of entry. Not a problem, though; we were there for several reasons and admiring a port terminal was not among them. One reason we were there was to see the first nuclear icebreaker, the Lenin, now a decommissioned floating museum. Also, we were all keen to see life above the Arctic Circle and to see life in an industrial city in Russia. Yes, we’ve watched all six or so seasons of the Netflix series The Americans, we’ve read Bill Browder’s harrowing story in Red Notice, and we’ve sat attentively as Maiya Furgason, our guest lecturer on the ship, has given us the unvarnished truth about Russia’s and Vladimir Putin’s role in the world today.

Right off the gangway, we met our guide for the day, Dilara. Dilara is a thirty-something mother of two who spoke very good English and is a native of Murmansk. She did her best to put a positive spin on her hometown. This city seems to have a thing for monuments, and I think we saw a fair number of them. I will share a few photos of the many monuments we stopped to see. 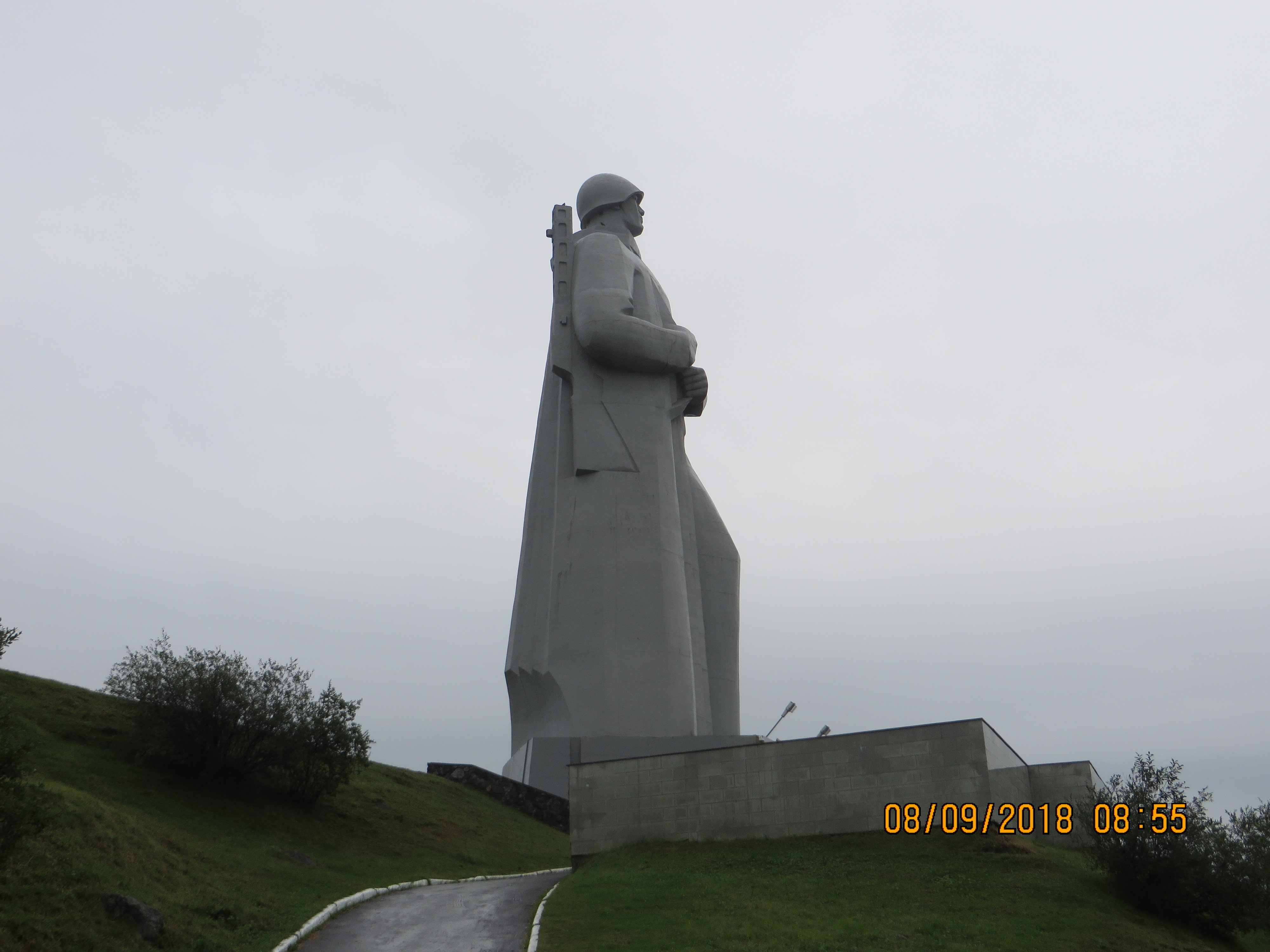 Alyosha monument to the Soviet military who served during the Great Patriotic War, also known as World War II. It stands 116 feet tall and is on the highest point in Murmansk overlooking the harbor. 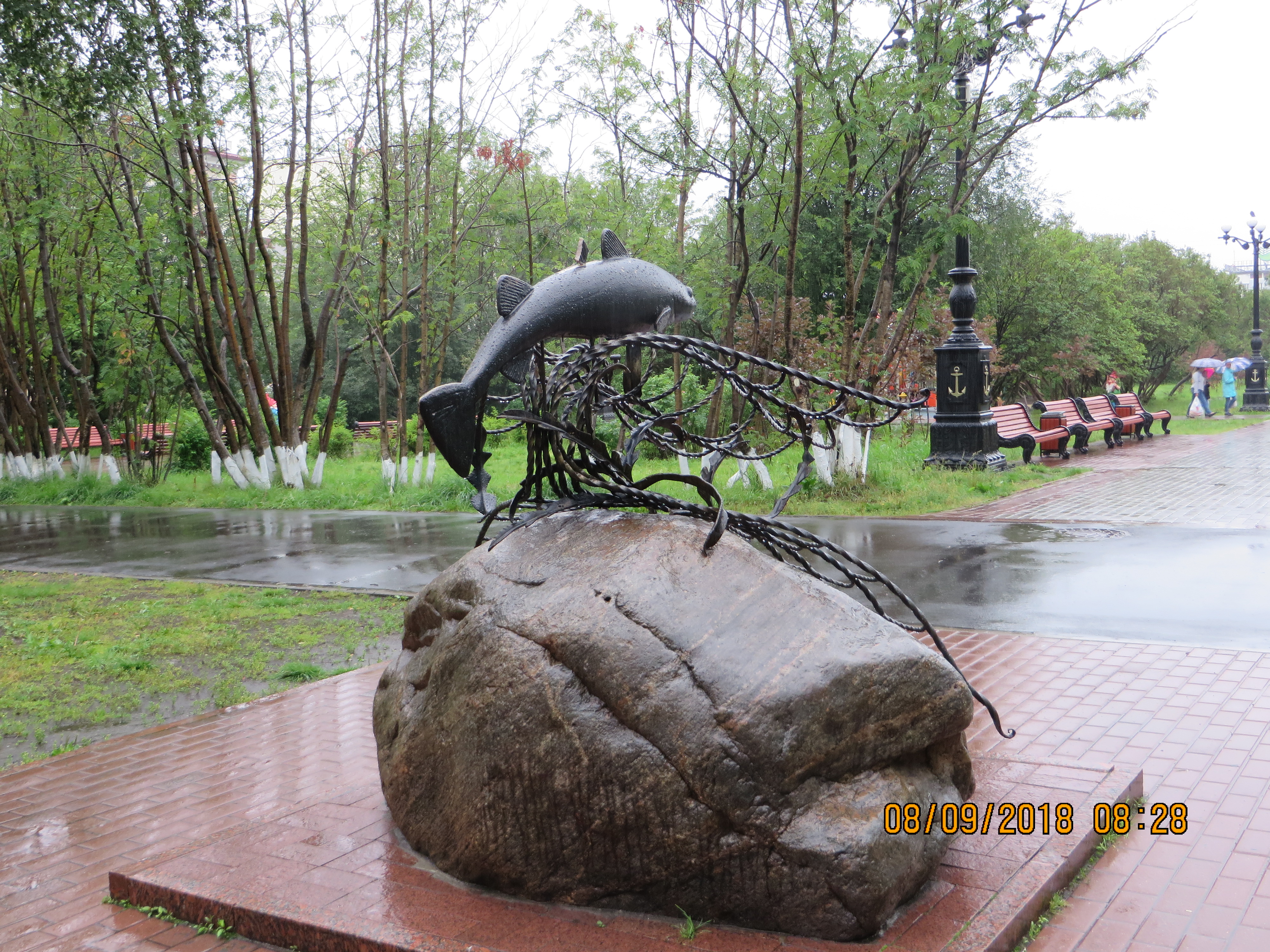 A monument to the codfish.

I will also show some photos of the housing in Murmansk. We saw not even one single family home. Everyone lives in an apartment building as far as we could tell. Many of these buildings look exactly alike and not in a good way. No need to editorialize; you can see for yourself and draw your own conclusions. 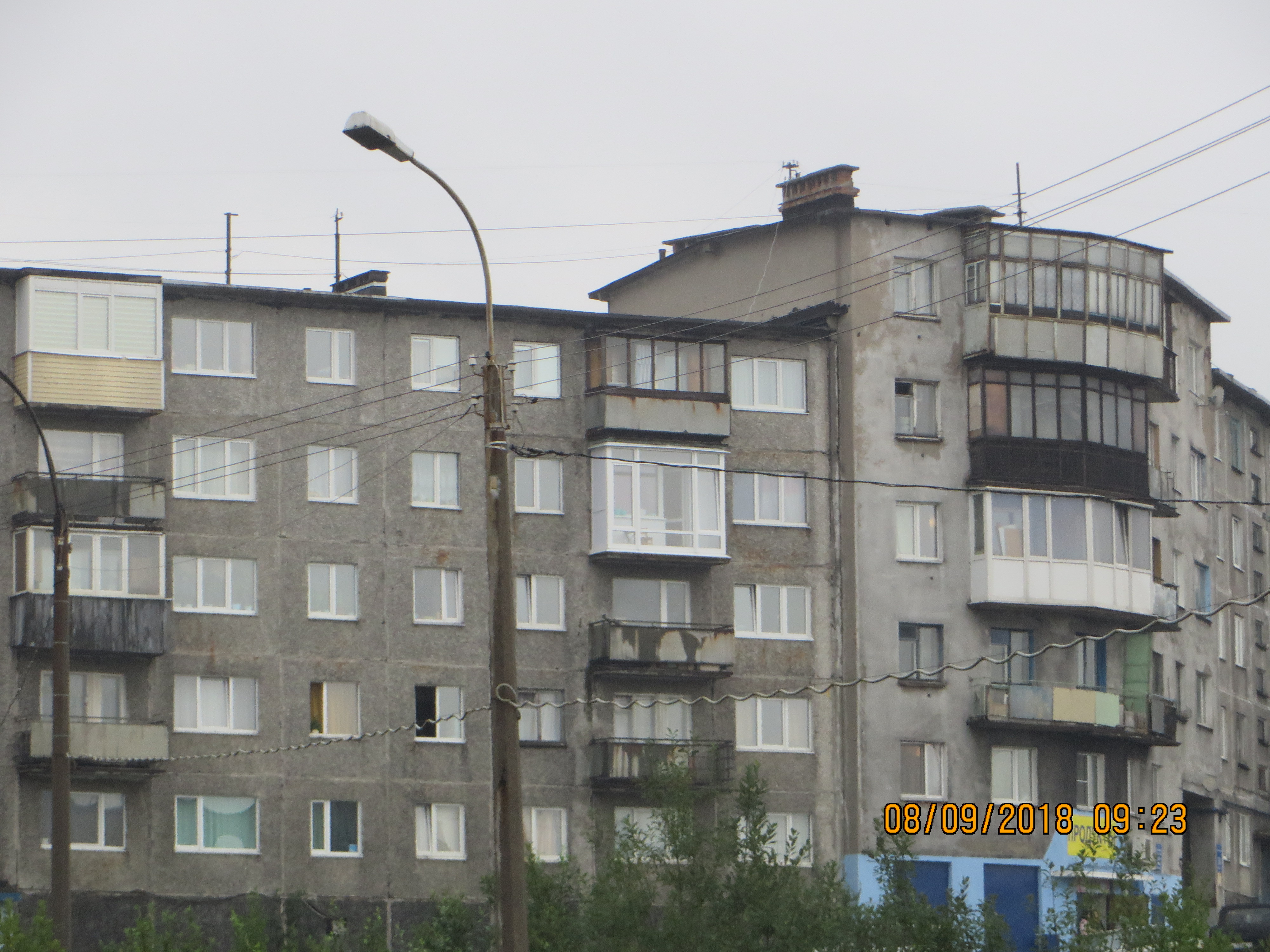 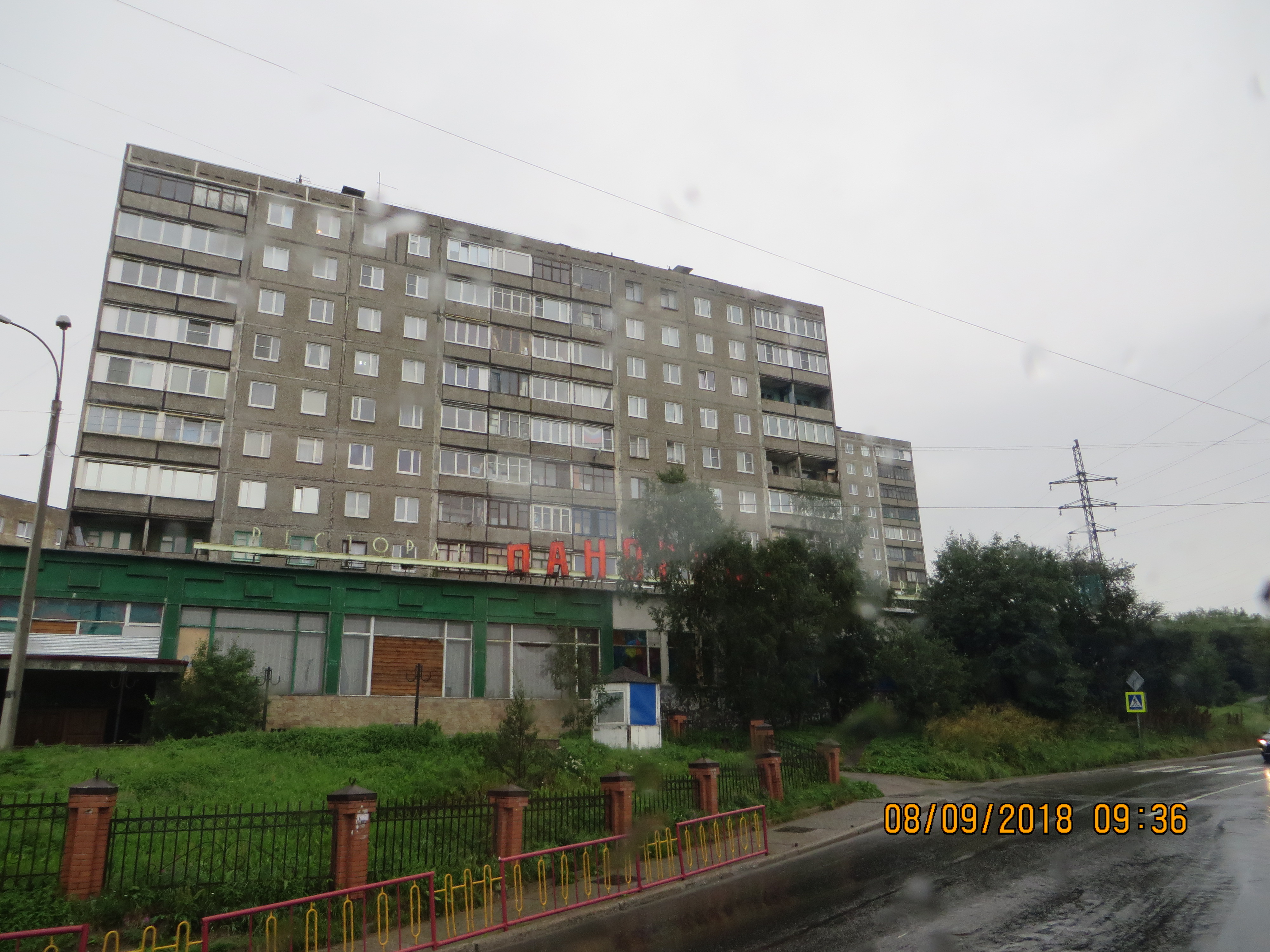 The Lenin, the world’s first nuclear ice breaker, was fun to tour. We clambered all over it. The Russians are very proud of this ship and of the fleet in general. Check out these pictures of the nuclear ice-breaker which went into service in 1959. 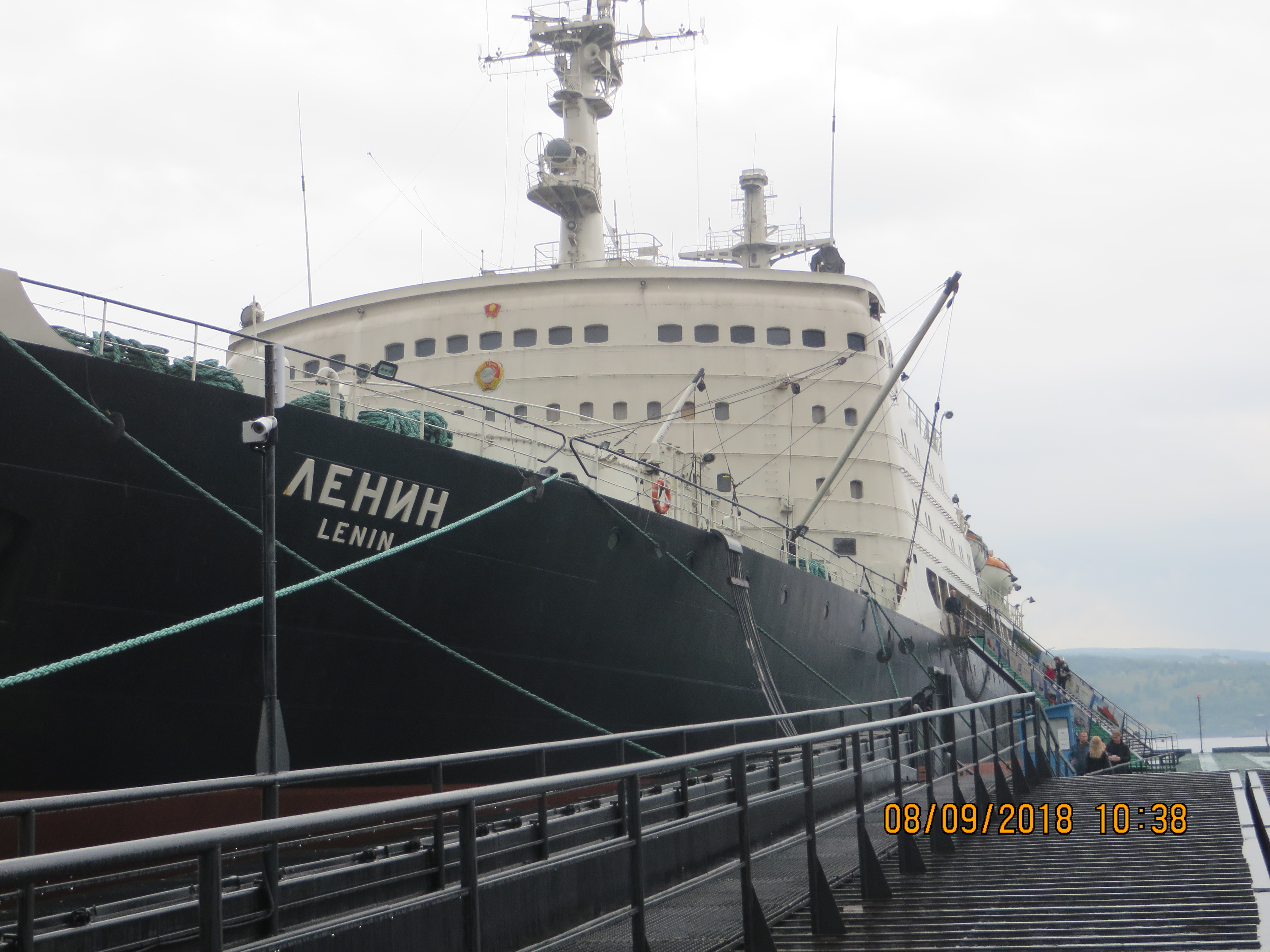 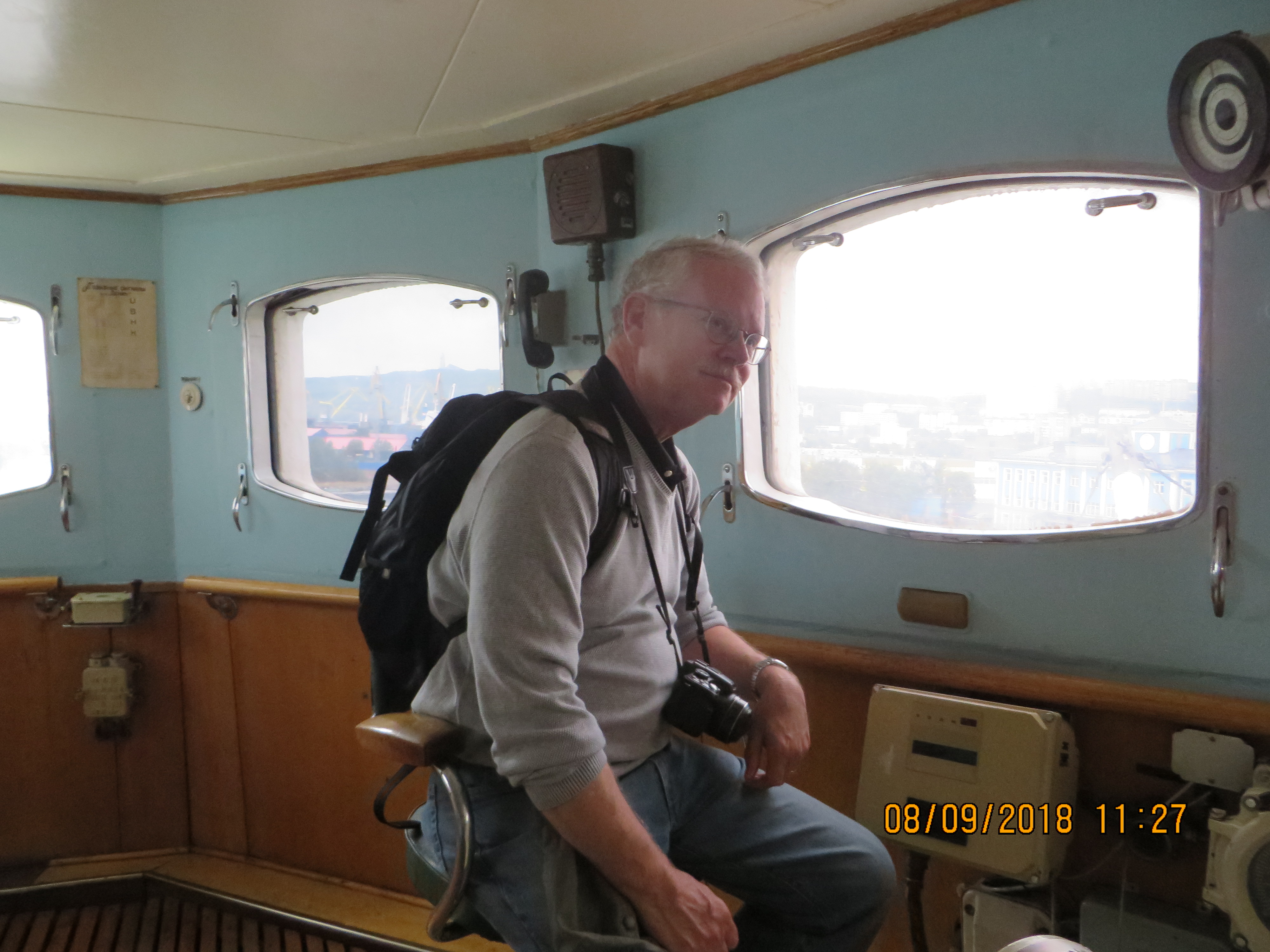 Rick in the captain’s chair. 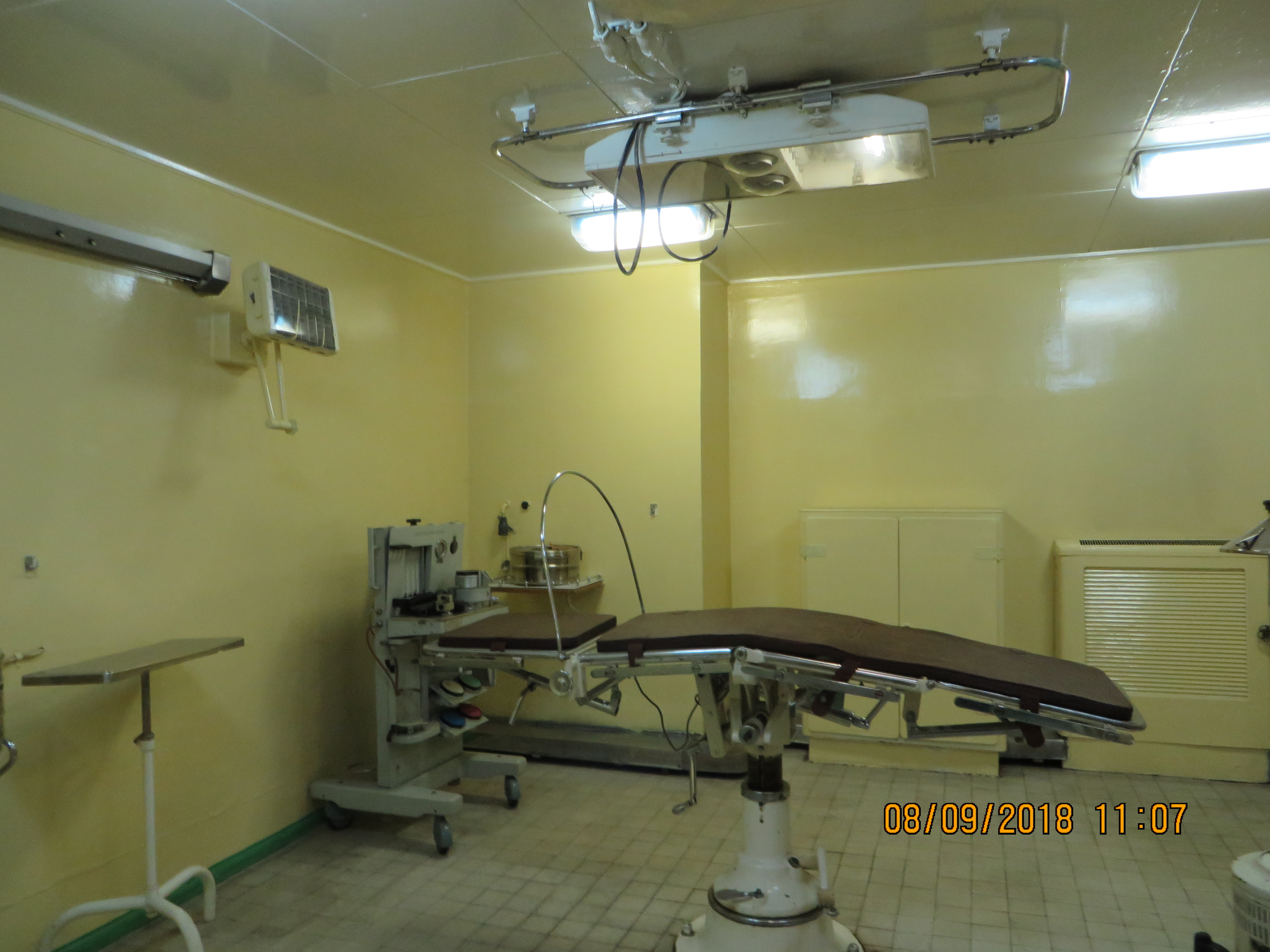 Pictures from the medical/dental facility. Since the ship was often out to sea for as long as 13 months, it had to be outfitted for medical and dental problems. 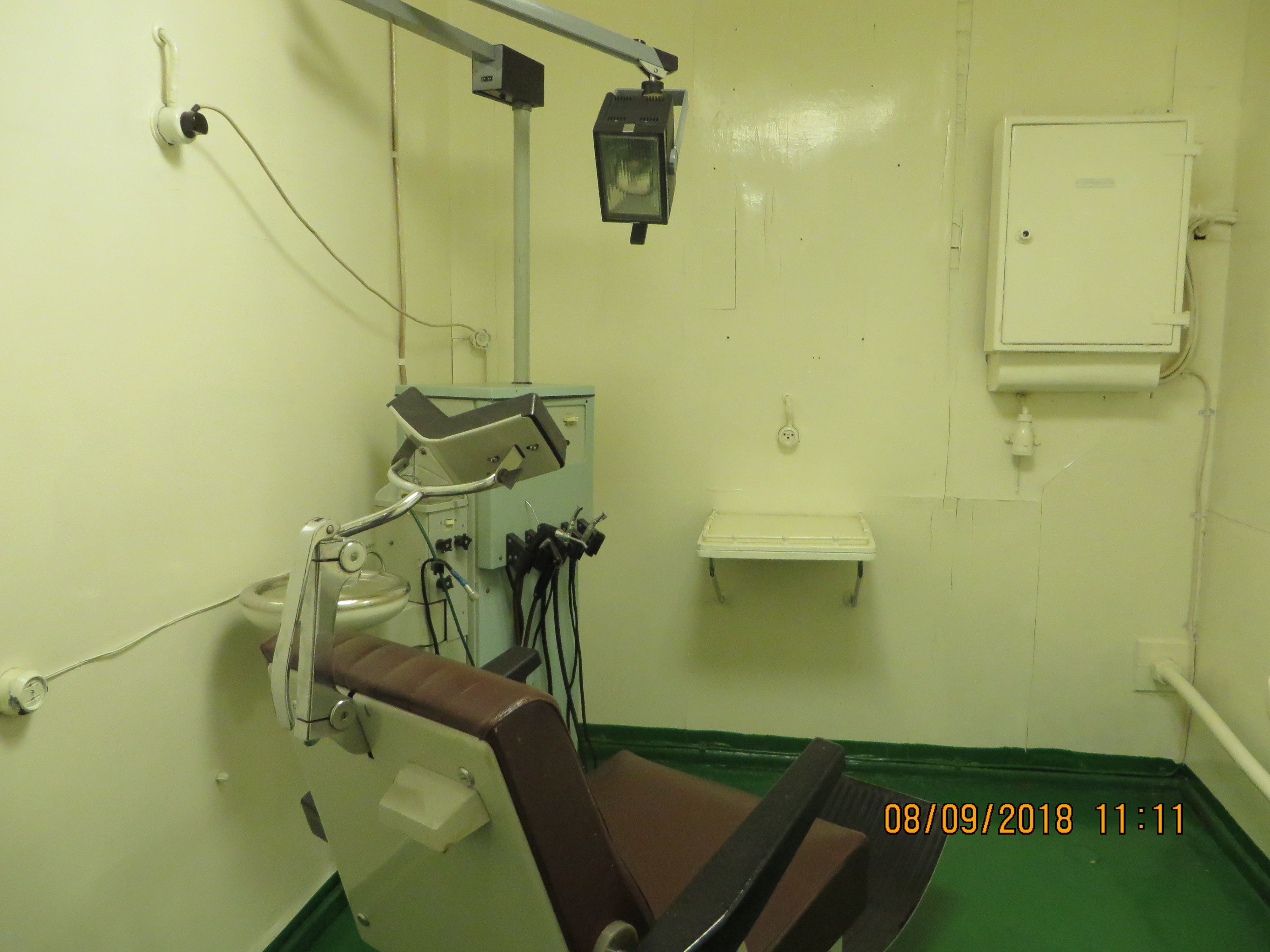 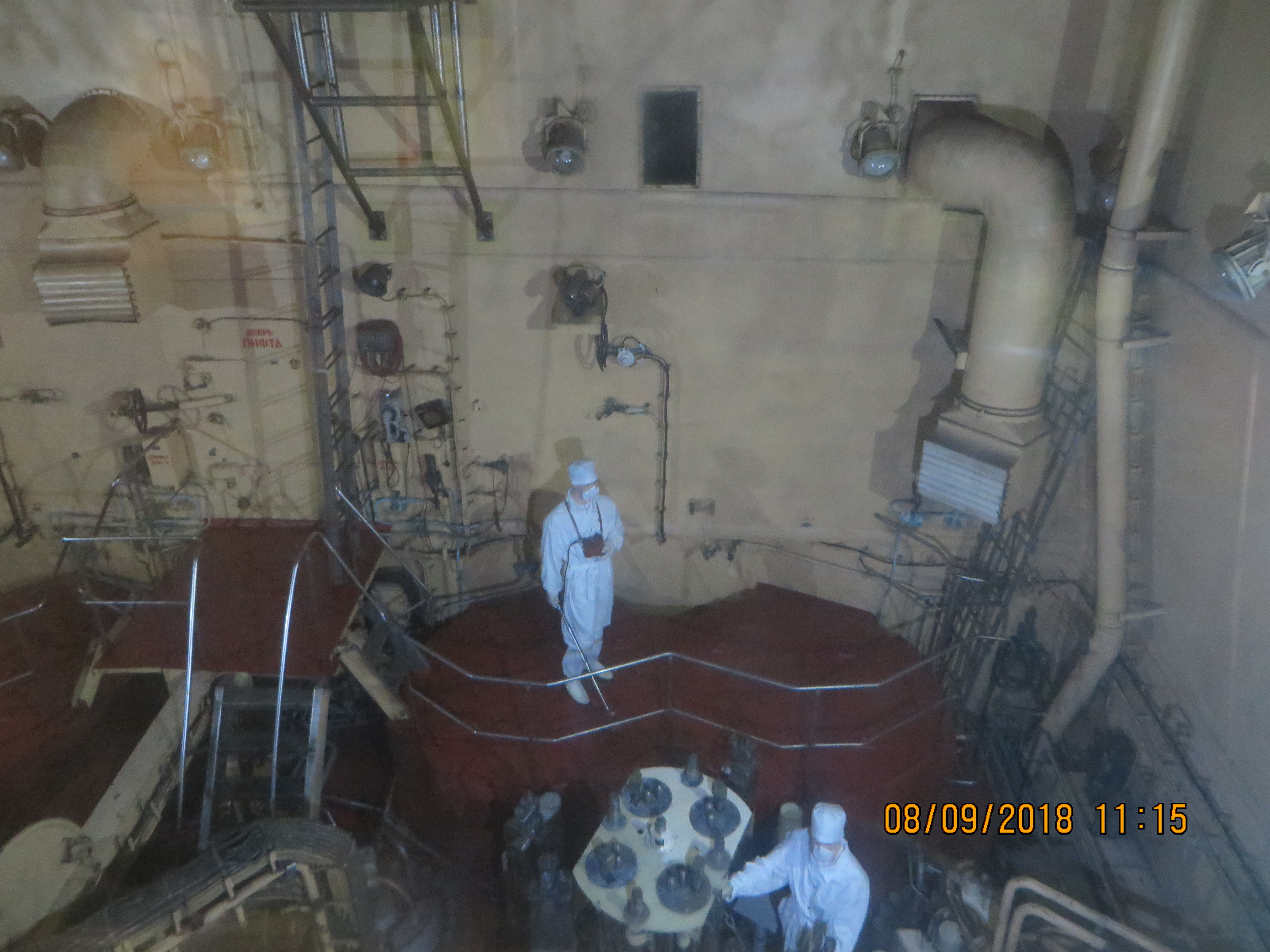 Down inside the nuclear reactor. 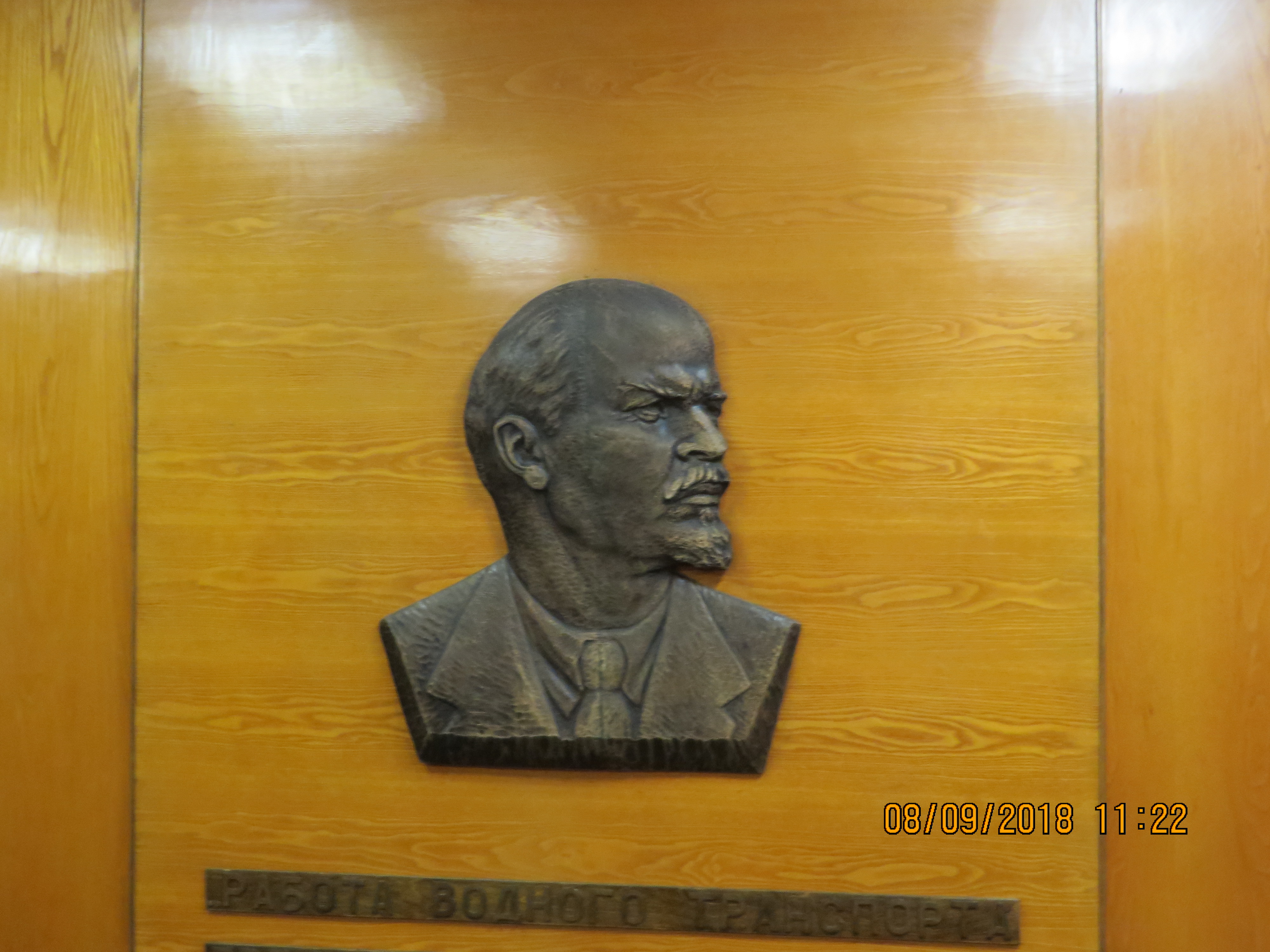 Images of Lenin were all over the ship.

During our afternoon with Dilara, she answered questions and offered a glimpse into life in an industrial city in northernmost Russia. It is dark, cold, and wet much of the year. There are about forty days of darkness every year, roughly from 2 December until 10 January. If that doesn’t drive the citizens nuts, imagine sixty three days of “midnight sun” every year from around 22 May until 23 July. Dilara said that it is not uncommon for people to come home from work, take a nap, wake up, and be unable to figure out if its 8 AM or 8 PM. She laments the difficulty getting good quality fruits and vegetables. Farms just don’t thrive in these harsh conditions. On the other hand, she says there are plenty of options for outdoor and indoor sports and, according to Dilara, the educational opportunities and health care are excellent. Dilara said that to live in bleak and dreary Murmansk, you have to have “sunshine in your soul.” I believe it.

Sadly, we were not able to push away from the dock that evening and the picture below is what we saw outside our sliding doors until morning. Turns out that the weather on the Barents Sea was looking to be rather hostile to cruise ships Thursday evening and captain felt it wise to remain docked in Murmansk until Friday morning. There is apparently a reason that sailors of old called the Barents Sea the “devil’s dance floor.” Recall that I wrote earlier that Murmansk is fond of monuments: we saw the monument to the 118 souls who lost their lives when their nuclear submarine, the Kursk, sank in the Barents Sea on 12 August 2000, eighteen years ago almost to the day. Since we are forced to delay our departure, we will miss the gulags at Solovetsky Islands, which we understand have been “sanitized” anyway. Onward we go to Archangelsk, which is on a river off the White Sea. We hear this city is trying to market itself as a tourist hotspot, which should be interesting to see. 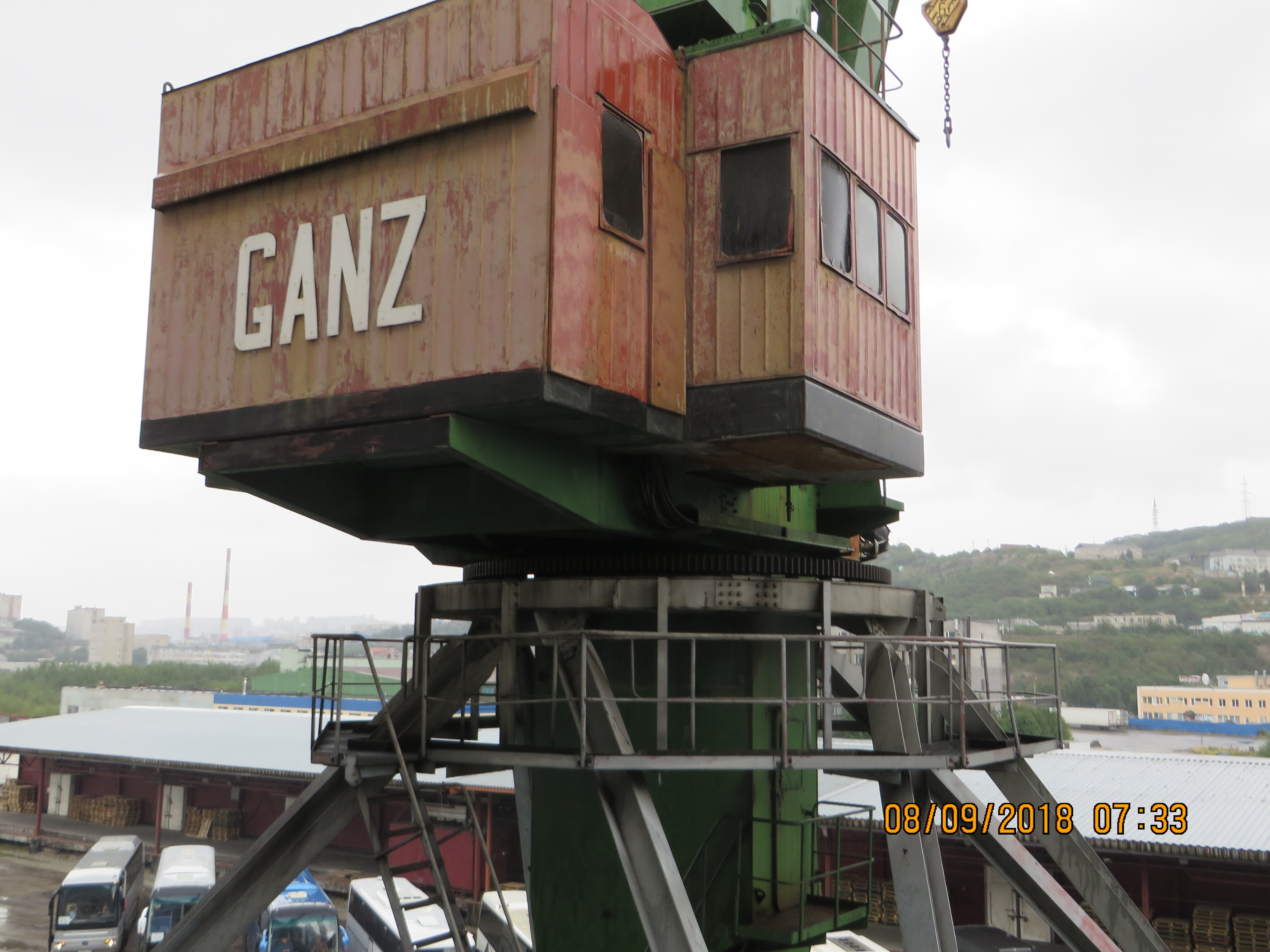 Not much to look at outside our veranda. 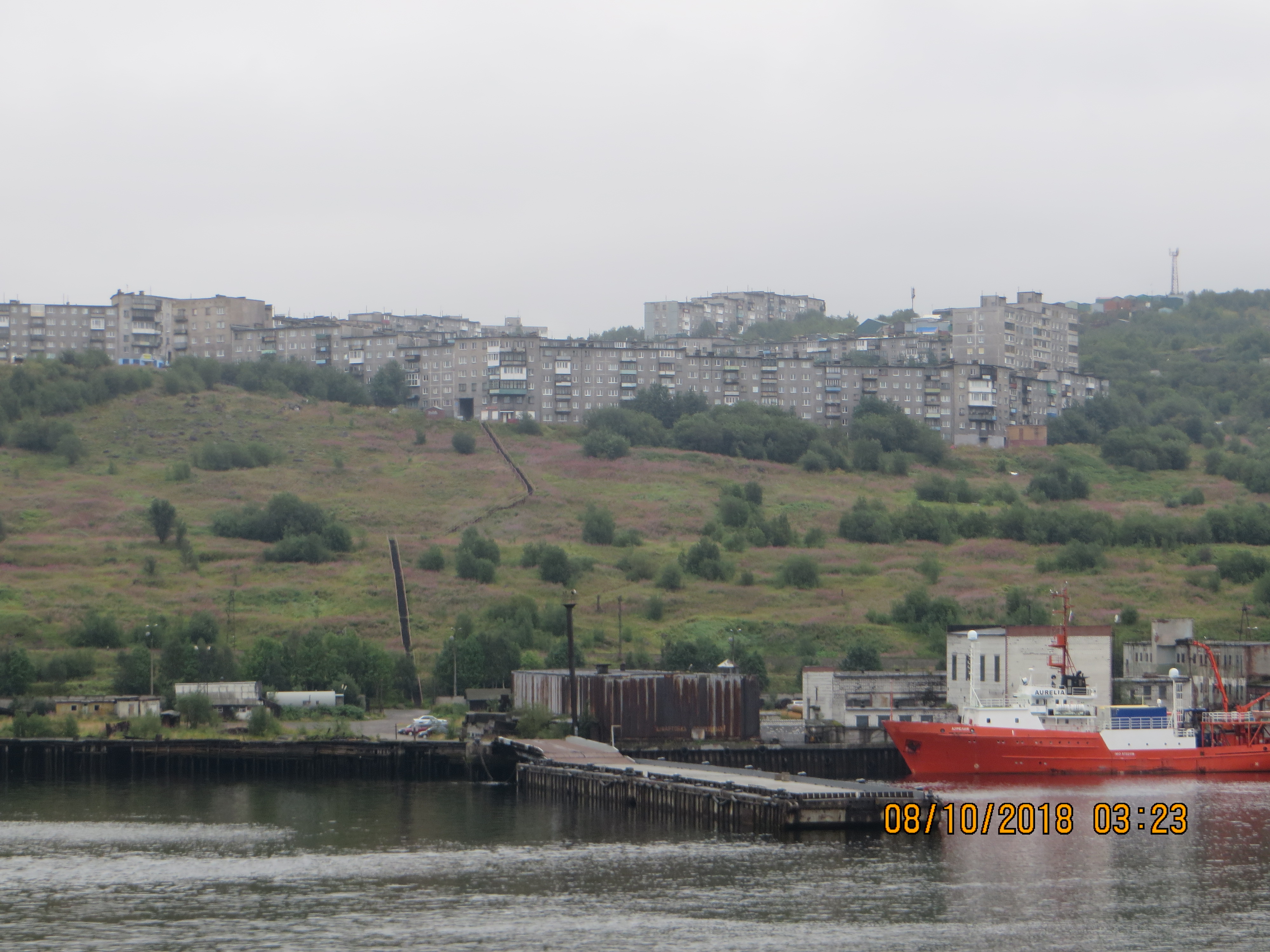 I will end with a joke Dilara told us. Apparently, it’s an old Murmansk joke. This guy says to his friend, “How was your summer?” His friend answers, “Not so good; I had to work that day.”

13 August 2018–Addendum—  I finally found out yesterday how the Barents Sea got its name. It was named for a Dutch explorer named Willem Barents who lived from 1550 until 1597.