If you suffer from the fear of crabs, or kabourophobia, you probably need to stop reading right about now. If you proceed, you should consider yourself forwarned. OK, then—here we go.

Today’s topic of discussion is king crab: or actually, more precisely, the three Cs of king crab—catching, cooking, and consuming. We did all three and it was incredibly fun. Probably not so much for the crabs, but as Demi Lovato would say (or sing), “Sorry not sorry.”

King crabs inhabit the cold seas of the world. They can grow to over six and a half feet across. I must admit that if I saw one that large, I just might develop a case of kabourophobia myself. The long-running TV series, Deadliest Catch, has probably done wonders for the crab safari businesses that have sprung up in the off-the-beaten-path cold coastal towns like the one our ship visited today.

We awoke this morning as the ship was sailing into Honningsvag, Norway. The weather was cold and the sky gray, but we were pumped about the king crab adventure that awaited us. We left the ship and made the short walk to the business called Destinasjon 71 Nord. We suited up in those really warm suits that are a necessity when you take a ride in a Rib boat along the coast of the northernmost town in Europe. We all piled in the boat, and with all the exuberance of twin 300 horsepower Suzuki motors, we sped out to the crab pot. Two strong young men pulled the pot from a depth of about ninety feet. They dropped the pot in yesterday baited with rotten fish. We could not believe the catch; there were at least fifteen massive red king crabs. Since there were about twenty of us on the two boats, the guys picked out seven and threw the pot back in. They kept the granddaddy for us to eat: that bad boy’s age was guessed to be about ten years and his weight was estimated to be around around seventeen pounds. We took them ashore and the crew killed them and prepped them for cooking. 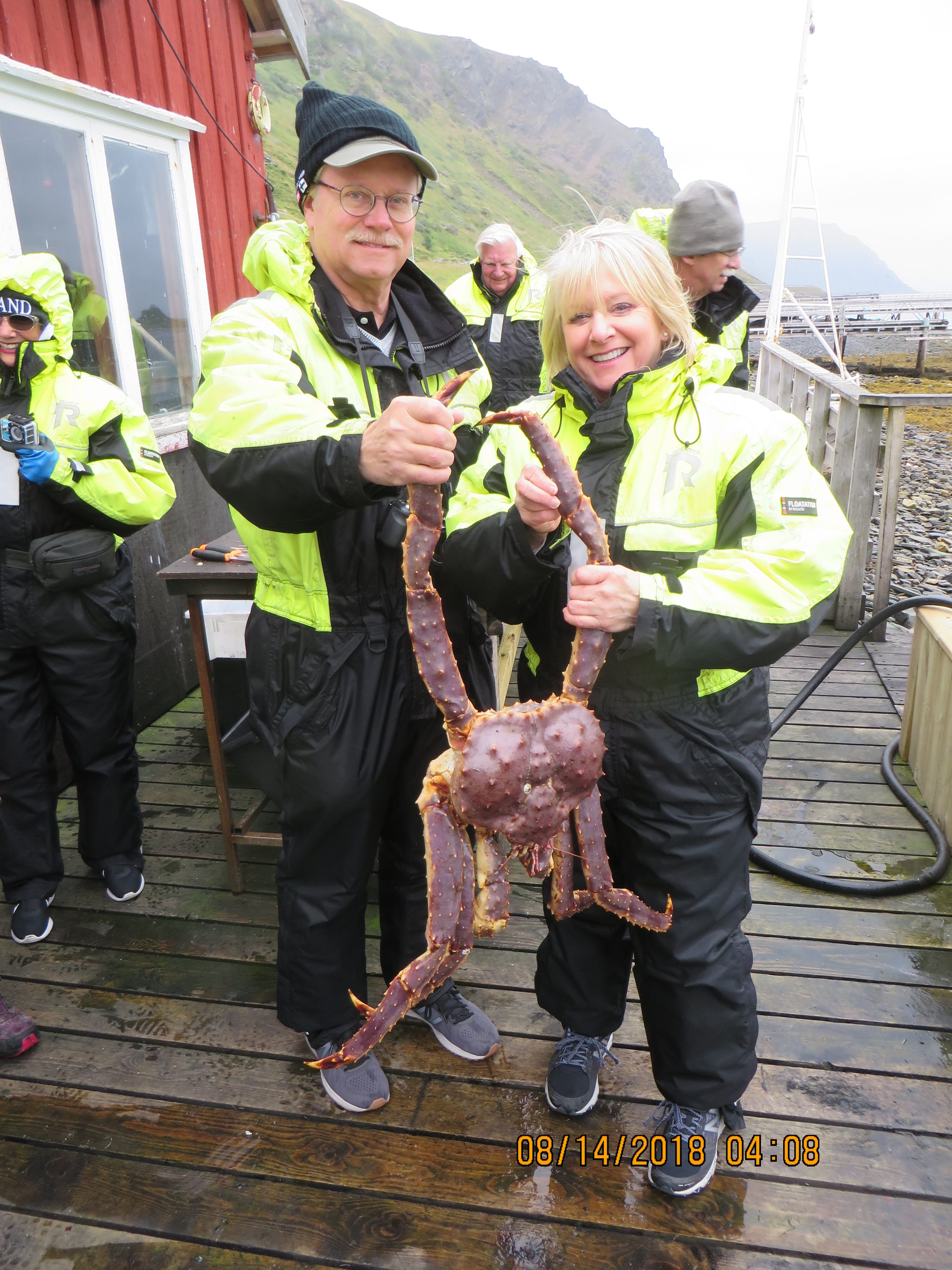 The king of today’s catch. 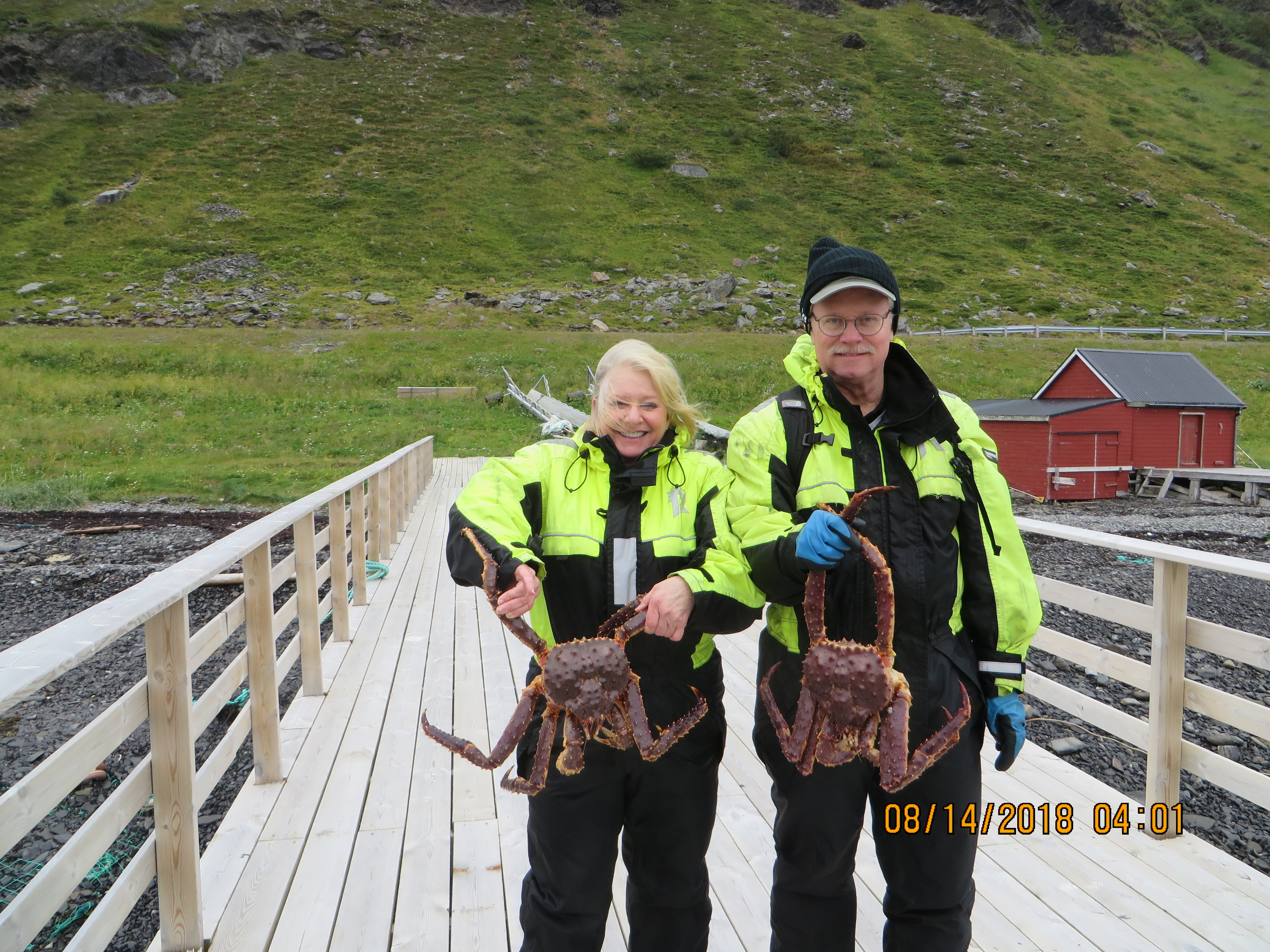 While we were waiting for the sea water to boil over the fire of birchwood, Tina, a cute young lady from Finland, told us how king crabs got to Norway. It seems that around 1930, Josef Stalin was trying to figure out how to supplement the food supply in Russia because alot of people were going hungry.  He sent a couple of scientists to the Kamchatka Penninsula on the eastern shore of Russia to bring some crabs back to western Russia. He wanted to colonize them in the waters around Murmansk. Unfortunately, the trial was unsuccessful, and in typical Stalin style, he had the scientists executed for what he saw as a failure. In 1960, the Russians decided to give it another go, but remember that the scientists from the 1960s were killed, and the information they learned from the failed experiment went to their graves with them, so the scientists of the 1960s had to start from scratch. They decided to bring only crabs that could turn themselves over when flipped, figuring that they were stronger than the others. They brought several thousand and this time, and the experiment succeeded.

But there is an interesting twist to the story. Around 1990, the king crabs started making their way to Norway. They just started walking over on the sea floor. (Can’t say that I blame them. I’d walk across hot coals to get away from Murmansk.) Anyway, the Russians were not pleased and told the Norwegians to leave the crabs alone even though they were in Norwegian waters. But it turns out that these guys have no predators except for humans. They are causing problems because they eat anything and everything and reproduce like crazy. One female can have 200,000 eggs at one time and 5,000 of those eggs can go on to become live crabs. Around 2002, the Russians told the Norwegians to have at it, so that’s just what the Norwegians are doing. Since we were on a tourist excursion, there was no limit as to the number they can take. Also, they can take females as well as males. 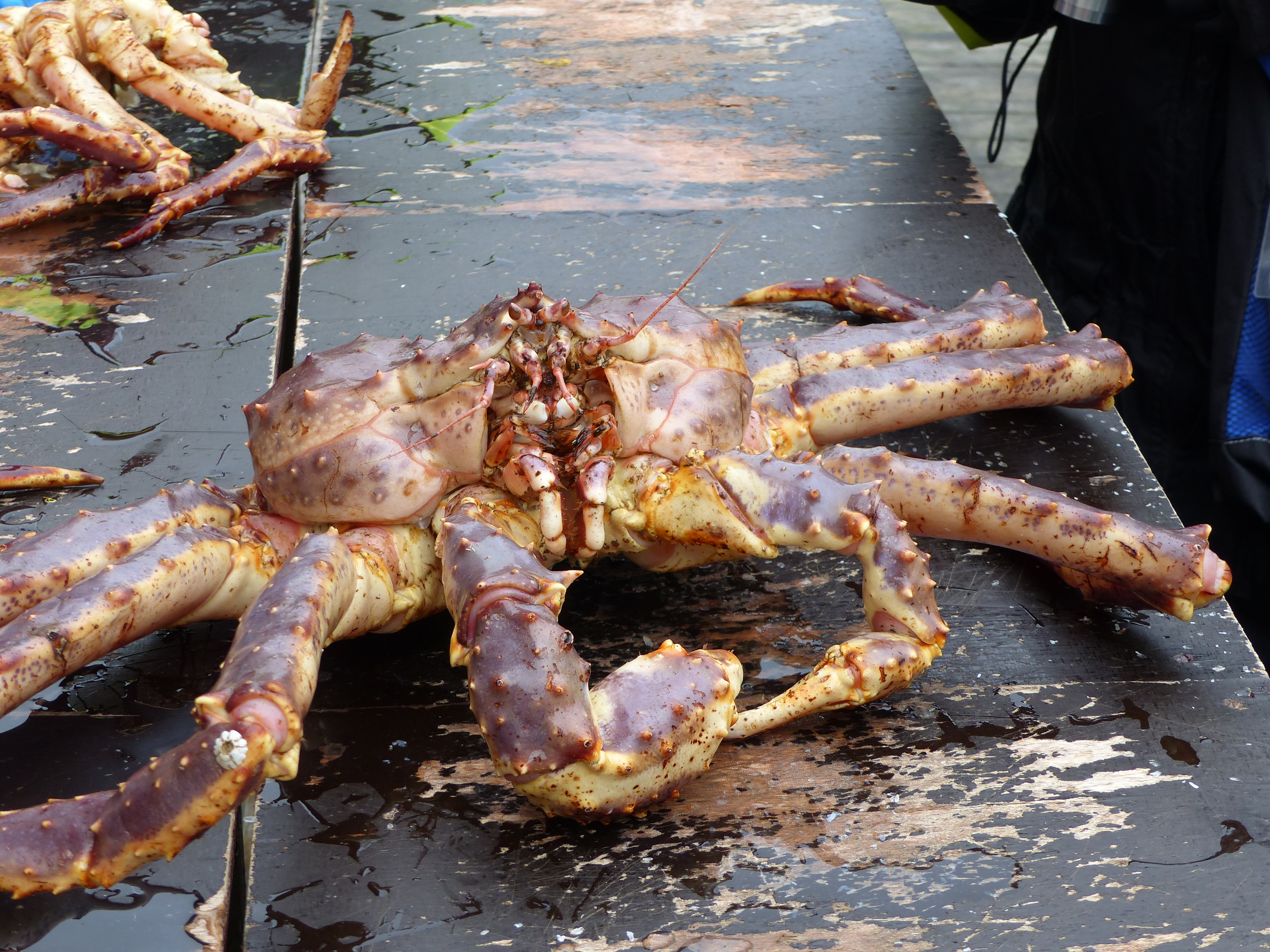 (Side note here: Looking for an interesting series to watch on TV? We were told by a random but nice stranger on our crab safari that Netflix has a fairly new and really good fictional series called Occupied, which deals with the Russia/Norway relationship. We plan to check it out when we return.)

Everyone in our group ate and ate and ate, but there was no way the twenty of us could eat all seven of those crabs. They served the crab in the traditional Norwegian way: we had bread, a massive blob of mayonnaise, and a big lemon wedge to squirt liberally on the crab. I assume that the crew devours the leftovers unless they are burned out on eating THE BEST KING CRAB IN THE ENTIRE WORLD. 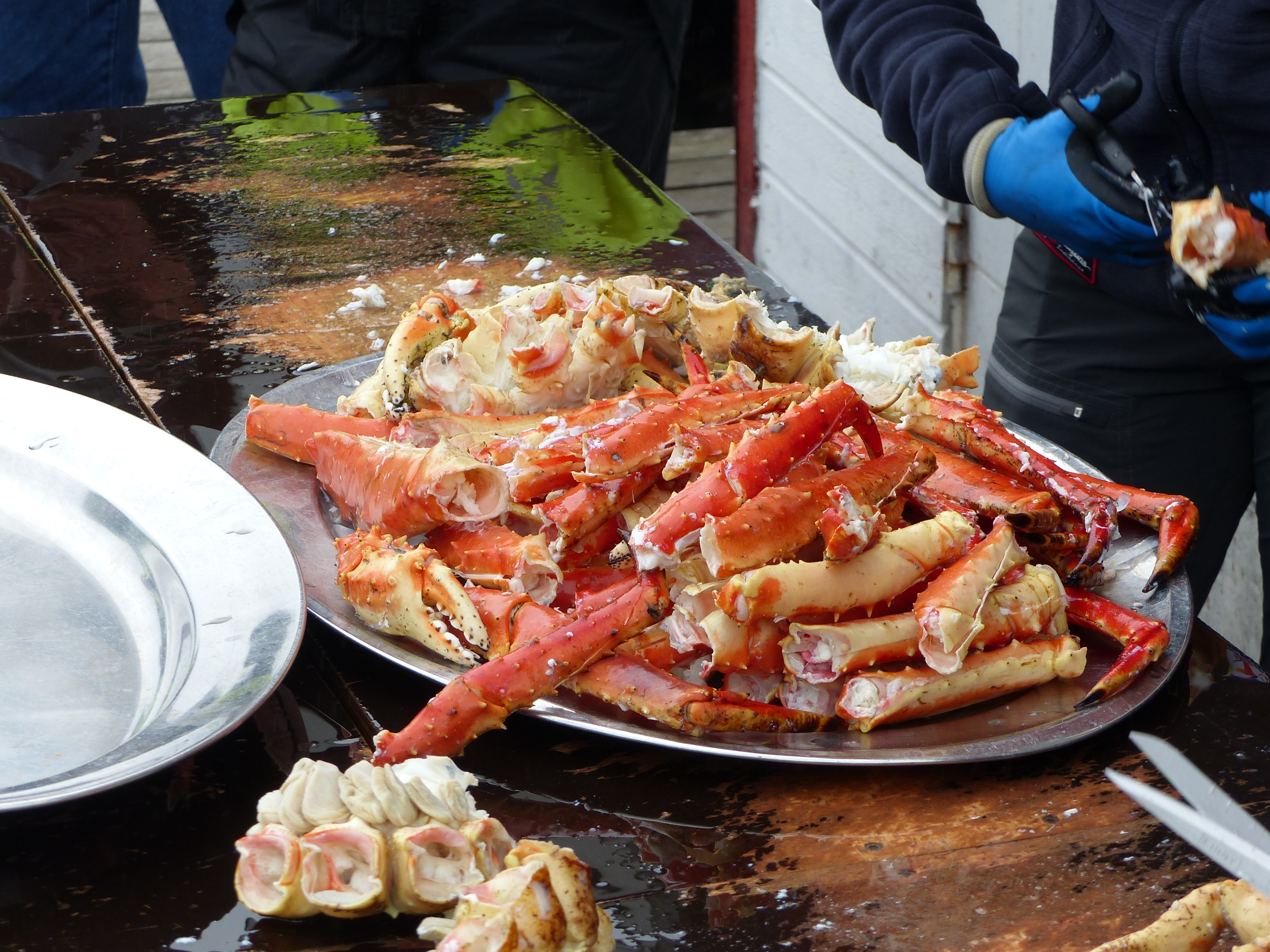 Our seven crabs yielded more than two platters this size!

Stuffed, we clambered back into the Rib boat and headed back into town where we popped in at the local ice bar for a cold juice drink from shot glasses made of ice. This bar is assembled from huge ice blocks hewn from a lake about 200 kilometers from Honningsvag and delivered on a huge flatbed truck. They build it every April and take it apart every October. It was really fun to see. I hear there are a few ice hotels around the world.  I’ll pass on that experience. 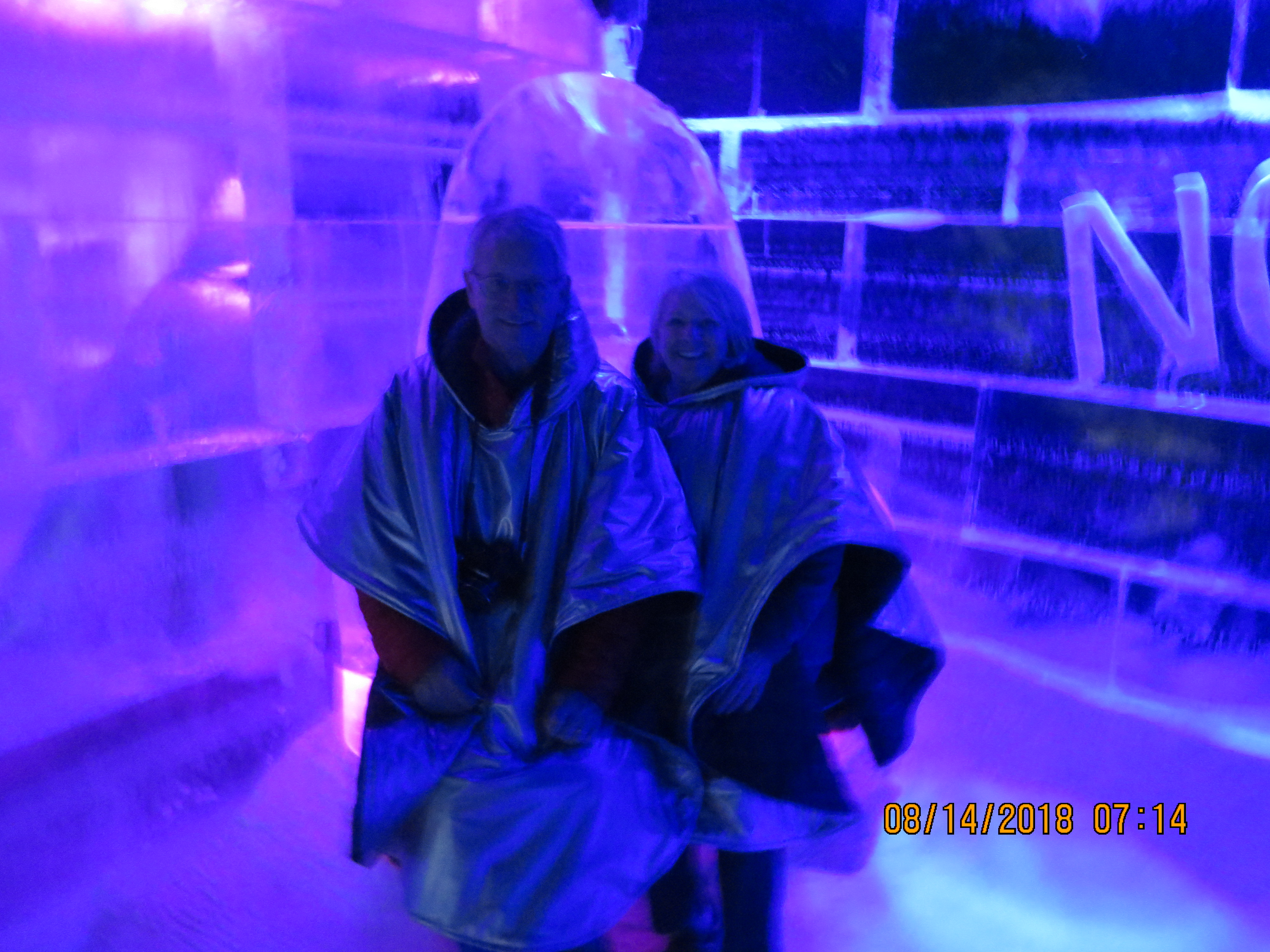 I know I’m going on and on, but I really want to tell one more quick quirky story about Honningsvag. There are about six thousand reindeer in the area owned by six Sami families. The Sami people are the indigenous people of this part of the world and have been known throughout time as nomadic reindeer herders. Every spring, the Sami take their reindeer over to the island of Mageroya on the local ferry. Yes, all six thousand of them, though it probably takes several ferry runs. They take them to the island to feed and breed during the spring and summer months. There are only around three thousand residents of the island and they long ago gave up on having little home gardens. (Those of us around Beaufort can totally understand this.) Anyway, early in the fall, the reindeer are strong from all the fine food, flowers, and flora. The Sami make them swim back across to the mainland and shoo them a little further south for the winter. Wouldn’t you just love to see the herds coming and going in the spring and fall? Well, I don’t have pictures of that,  but Rick got some good shots of a few reindeer way up on the rocks and I will share them. By the way, there are no stray reindeer in Norway. They all belong to someone and they all wear ID tags. 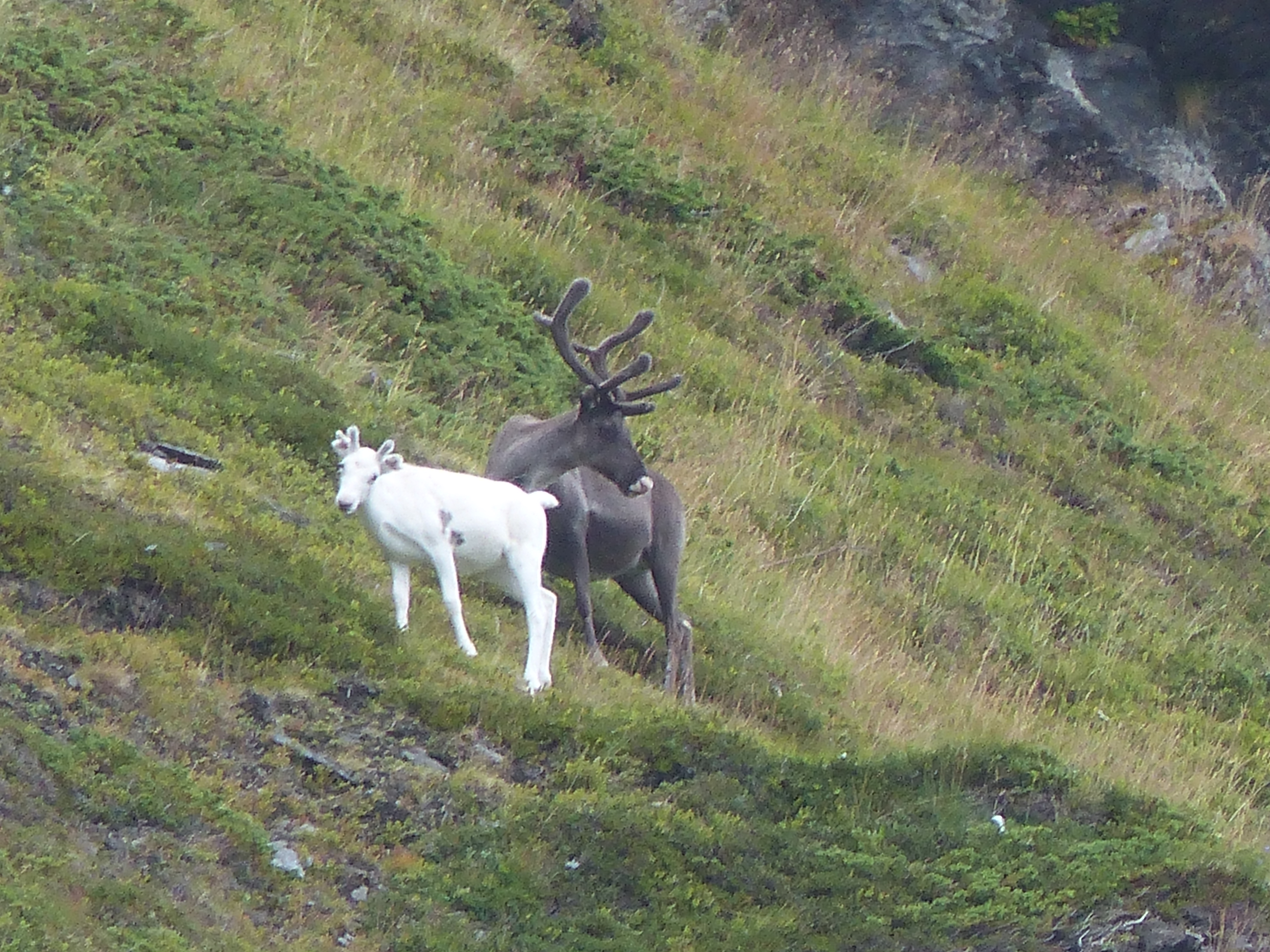 They still have that “velvet” on their antlers. Both male and female reindeer grow antlers and they shed them every year.

The day was simply fabulous. We love spending time outside exploring this phenomenal world. There is always something new out there. All we have to do is step outside, no matter if we are in our own backyard or halfway around the world. 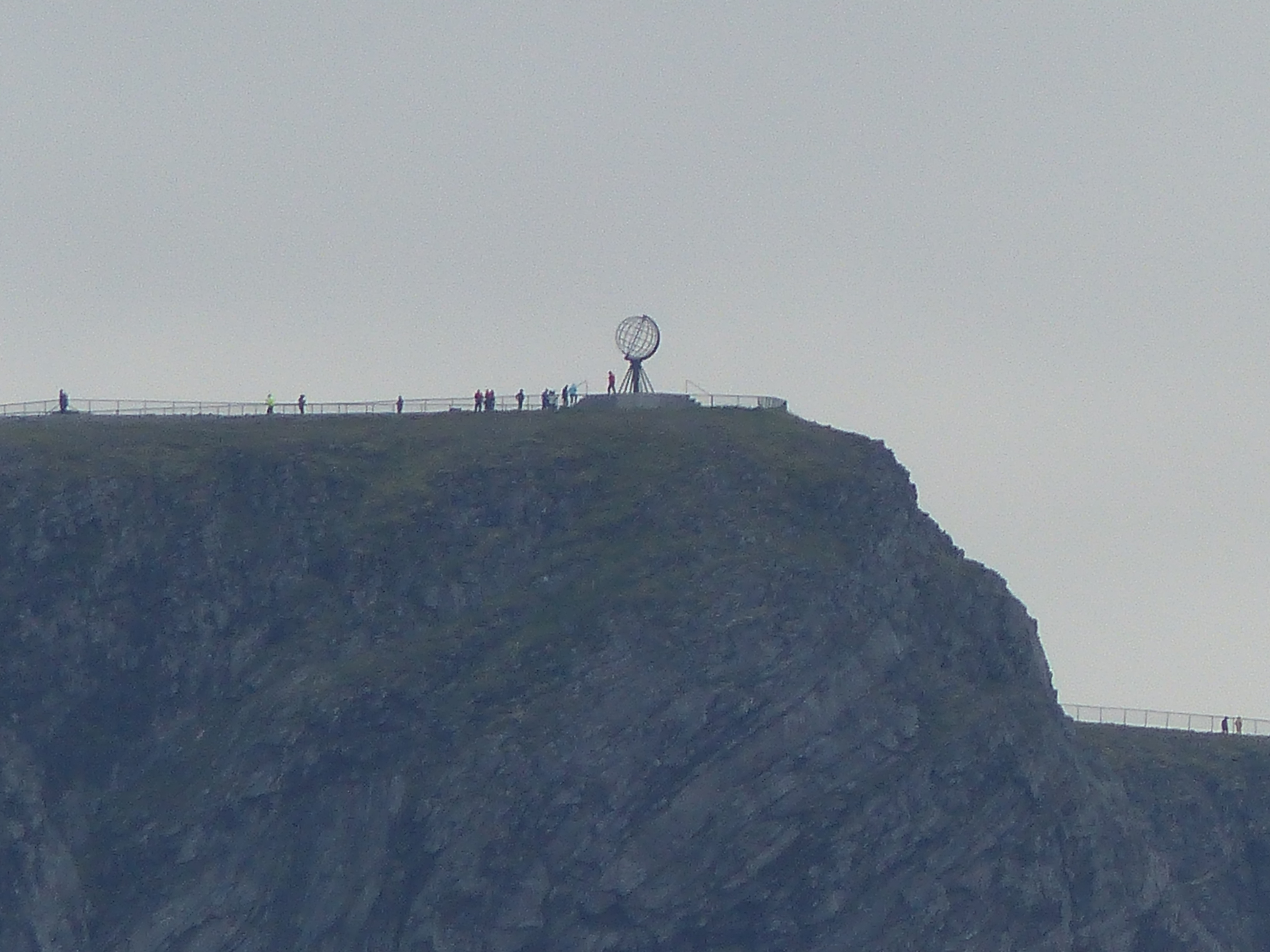 We sailed by Nordkapp when we left Honningsvag and headed south along the Norwegian coast.