We are leaving the ship this morning and heading home. Captain is staying on. Captain lives on this ship. No, no. I am not referring to the captain who is currently up on the bridge, although he lives here too, but he gets off after his tour of duty ends and goes home for a few months of R&R. I am talking about Captain. I’ve been told that he has lived here for the last twelve years and somewhere back in time, he was given the honorary title of Captain. Most people have only seen him in the dining room, although I am quite sure I saw him standing at the back of the theatre one evening when our cruise director was performing a little pre-dinner show.

According to some folks we spoke to who are on the Navigate the World Voyage, Captain eats the same thing for breakfast, the same thing for lunch, and the same thing for dinner. He never takes a quick peek at the menu to consider something a little different every now and then. Captain is quite proper. As someone “of a certain age” (which I am going to guess to be early to mid-eighties), he wears a tie every day. He always thanks his waiter on his way out of the dining room. He always sits at the same table with the same waiter. His table is set in exactly the same manner for every meal. Several times, we have been seated near him for lunch and I found it fascinating to watch his routine. Captain likes olives (green and black), catsup, and slaw. I think there may be some nuts in one bowl. Six packs of Splenda must be available for sprinkling on his cantaloupe, which he follows with a liberal shaking of his salt shaker, which is different from ours. His looks like an old fashioned diner-style shaker. Ours looks a little more fancy. He likes San Pellegrino, always two glasses, one with ice and one without. I also have a photo of him, but I do not think that it the right thing to do to post it here, but I will show his table setting. From what I’ve seen, Captain generally makes a “happy plate,” as Harvey calls it when he cleans his plate, then he enjoys a cup coffee from his own thermal carafe. 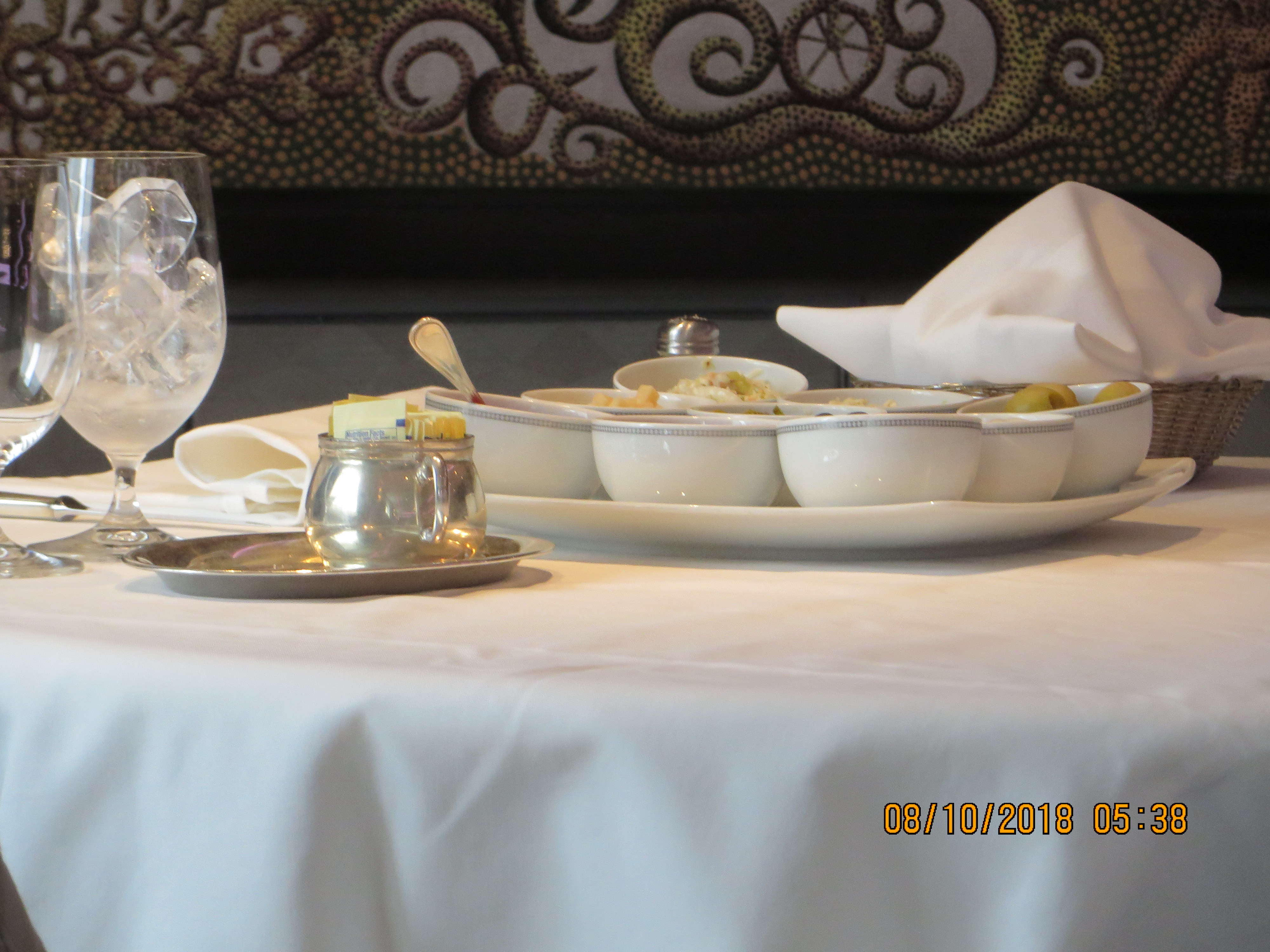 Nine small bowls with the same condiments in the same arrangement. Everything is the same every meal.

I am so very fascinated with Captain for several reasons. For one, I think it is interesting to explore the financial pros and cons of living on a cruise ship. I think we can all agree that Captain is not poor, but living here, he has no mortgage, no home maintenance, no home insurance, no car, no car payment, or car insurance. You get it. Three hots and a cot, as they say, only the service is probably better than your average assisted living facility. Another big plus, if you live on a cruise ship, you are not being a burden on your children, although you would be burning through their inheritance at a fairly rapid clip. Like everything, there is a trade-off. There is a physician on board, although Captain must be in fairly reasonable health. I guess when the ship calls at a port, he can get off and see a physician, get labs drawn, go to a dentist, and generally see to whatever he needs. I would bet good money that the ship’s executive conceirge sets up appointments for him and that someone from the ship accompanies him when he disembarks for any reason. Onboard, there is a gym, there’s the internet, movies, TV, newspapers. I could go on and on. It’s all here! There are no politicians on board, which I see as a plus because we seem to manage just fine here without them. I am sure they would tell us not to try this back at home, but I’m game. How ‘bout you?

Also, I think it is intriguing to look at the interpersonal relationships, if any, with family back home as well as crew and fellow passengers. And what does he do all day, all month, all year? Does he ever get off for shore excursions? Does he read? Does he watch TV? What does he do when he runs out of toothpaste? I would love to talk to him, but as far as I can tell, he doesn’t hang out with those of us who are short-timers.

But go ahead and admit it. Wouldn’t you absolutely love to know how many times Captain has circumnavigated the globe?