After our morning at the Indiana State Capitol, I do believe that Logan and I know more about the Indiana state government than the average Hoosier. We were the only participants at the 10 AM State House tour Friday morning, but that didn’t dampen the enthusiasm of our fabulous tour guide, and she led us all over that building until way past 11 AM. We visited the office of the Secretary of State, Connie Lawson; no relation, I’m sure. We sat in the chamber of the House of Representatives as well as the Senate chamber. Comfy chairs, by the way. We know how bills are introduced, passed, and vetoed. We strolled into the Indiana Supreme Court and heard how it functions. We admired the paintings of every single justice of the Indiana Supreme Court since it’s inception. We are walking, talking fountains of Indiana knowledge. We could make a Hoosier high school civics teacher proud. 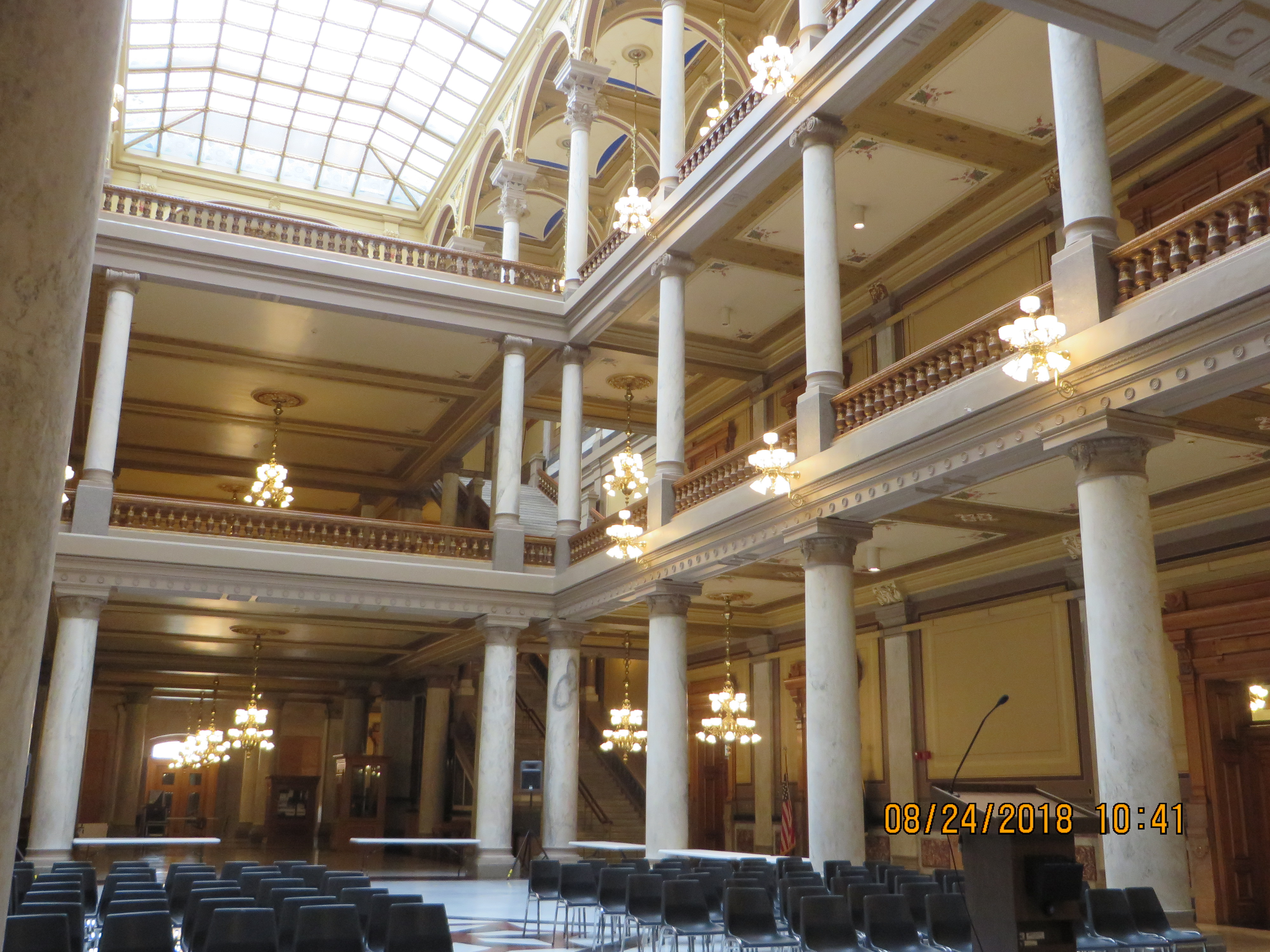 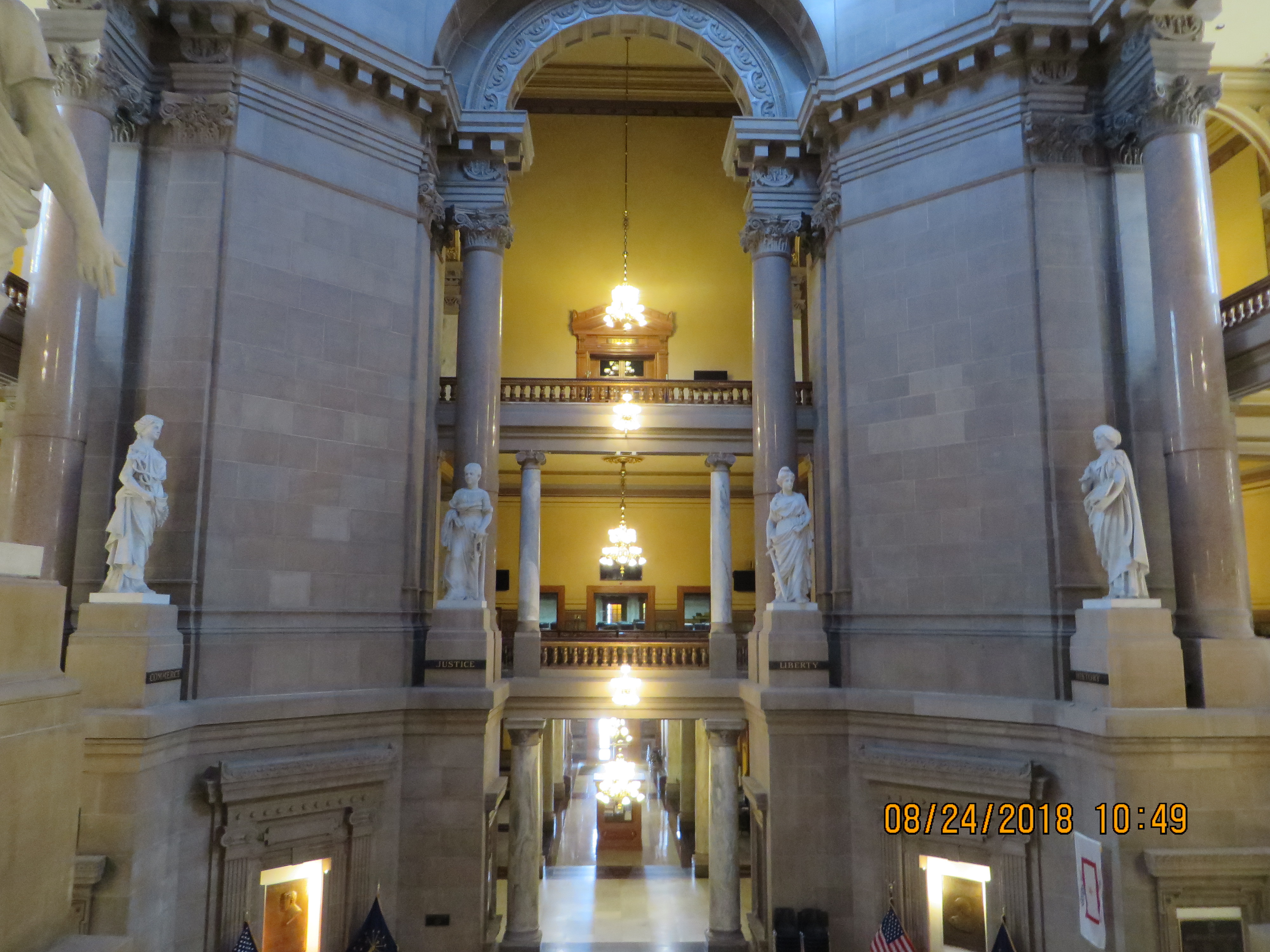 The building itself is a beauty. Such incredible workmanship! What beautiful stained glass, granite, and Indiana limestone. The light fixtures are unbelievable. It was built between 1878 and 1888 and came in under budget at just south of two million. I asked our guide if there were estimates as to what it would cost to build the same structure now and she said that it is thought that the state would blow through 600-800 times that amount to reconstruct this magnificent building. No state could afford that. I hope they keep those insurance premiums paid up. The building is quite large and houses all three branches of the government. I don’t know how common it is in other states for all three branches to be physically under one roof, but I can easily imagine that “organized chaos” perfectly describes the place when all three are running at full speed. 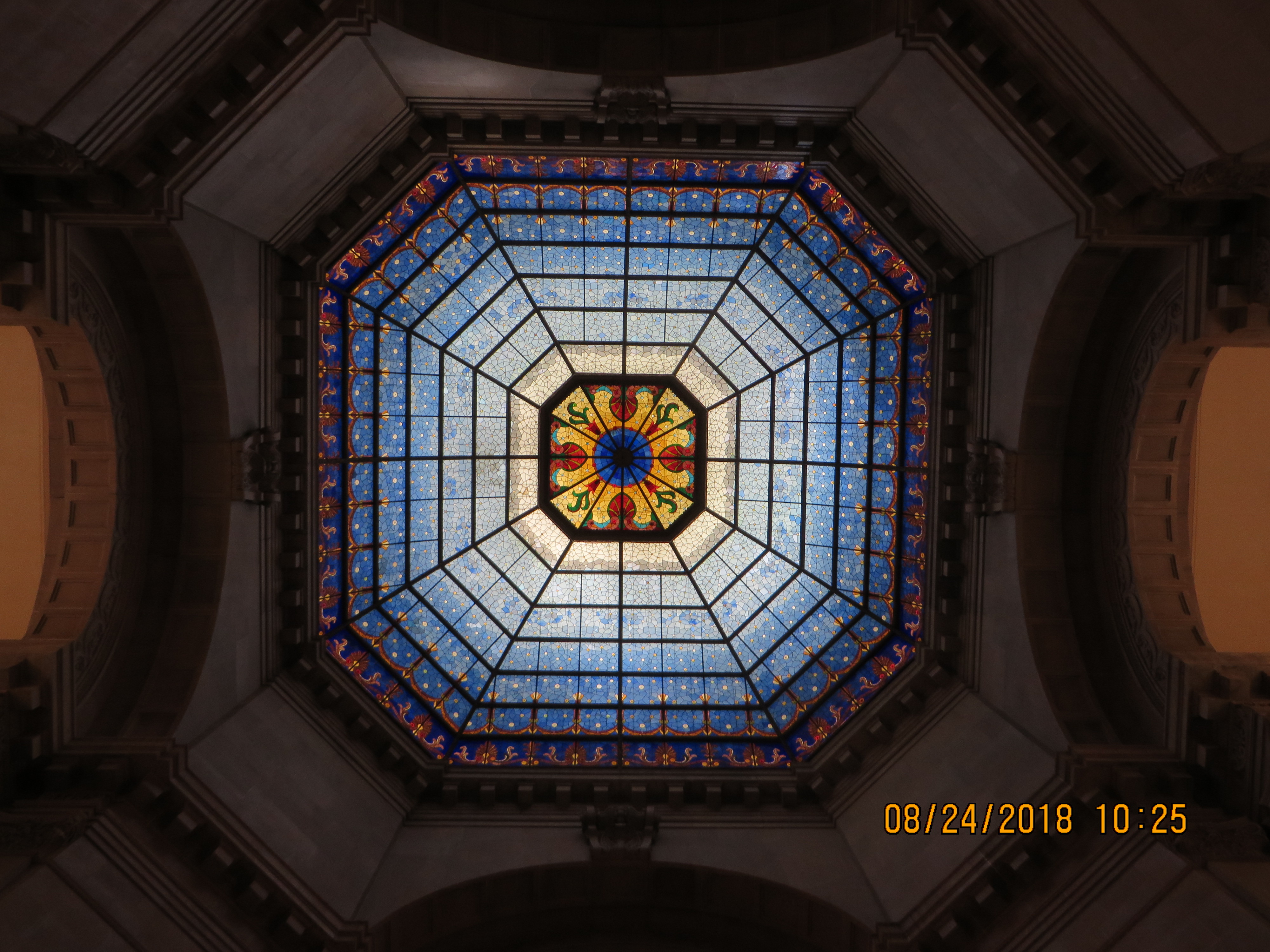 The stained glass dome of the Indiana Capitol soars over 100 feet above the first floor.

After a quick lunch, we hurried to the Indianapolis Museum of Art. This art museum is part of a vast, 100 acre complex dedicated to the arts and nature. We had to be there by 1 PM because we wanted to get in on a presentation on the ongoing work to identify art looted by the Nazis and the efforts to return it to its owners. Apparently, the work of the “monuments men” continues with art curators and dealers still trying to establish the provenance of thousands of works of art. The Indianapolis Museum of Art is very involved in this research and in documenting the chain of ownership for all pieces in their collection that are European and were created before 1946 and acquired after 1932. I did not realize that, at one time, there were well over three hundred real life “monuments men.” The IMA has in it possession a painting by a Dutch artist for which they have no clear title, so of course this is subject to much research. Our guide recommended a documentary called The Rape of Europa, which explores the actions and motivations of the Third Reich involving art. Logan gave our tour a “thumbs down,” but I found it very thought provoking, so I liked it much better than he. Sadly, we did not have time to enjoy the nature part of the complex. 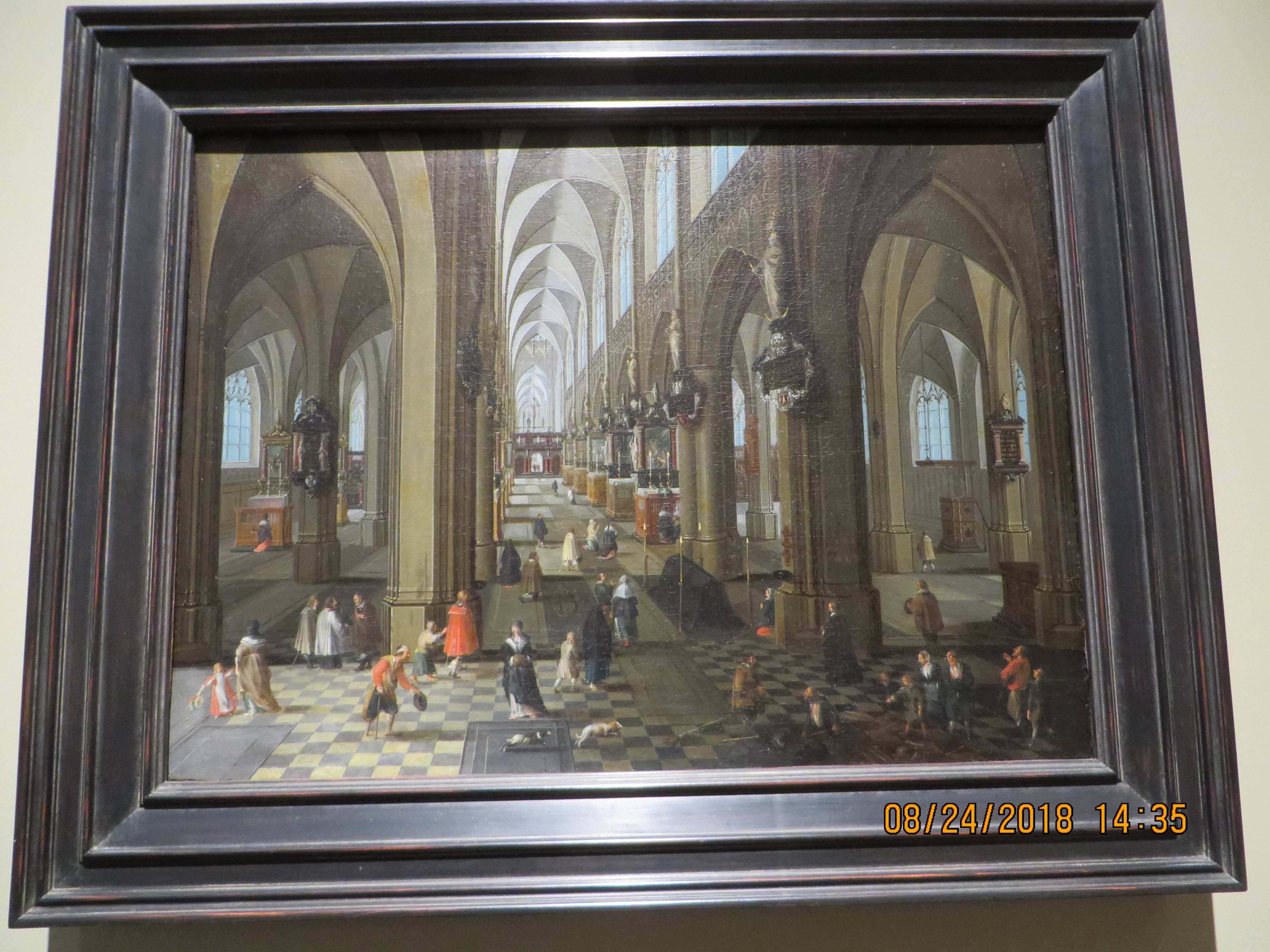 The Indianapolis Museum of Art is unsure of the chain of ownership of this Dutch painting.

Before long, we were having a lively conversation with Brandi, our Uber driver, as we headed back into downtown Indianapolis. Brandi is a native of Indianapolis, so she had lots of great suggestions of places we should visit. On a lark, we hopped out at Monument Circle. We looked around the area for a bit, checking out all the monuments, and then decided to enter the obelisk known as the Soldiers and Sailors Monument. I headed for the gift shop (a safe choice, right?) but Logan wanted to climb the dang thing. I said “OK, I’ll go, too,” thinking I’d ride up. No dice: you have to pay to ride. Being a cheapskate through and through, I decided walk up instead of paying. Whatever—it was merely 330 steps. About one fourth of the way up, a sign cautioned me not to try to climb all the way to the top of the obelisk if I had “recently eaten.” I pressed on and must admit that the view from the top was worth the effort. 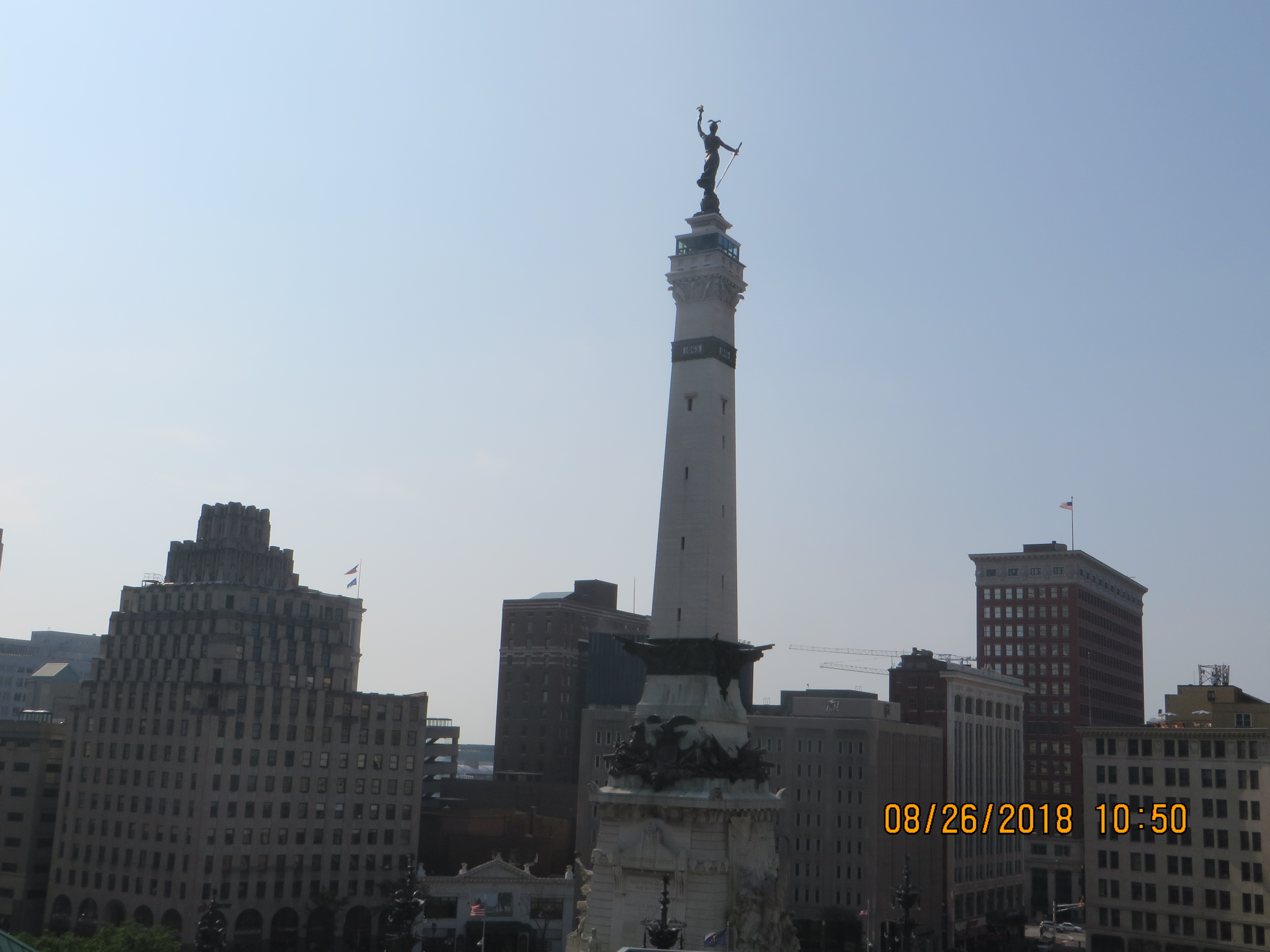 The Soldiers and Sailors Monument in Monument Circle, Indianapolis. 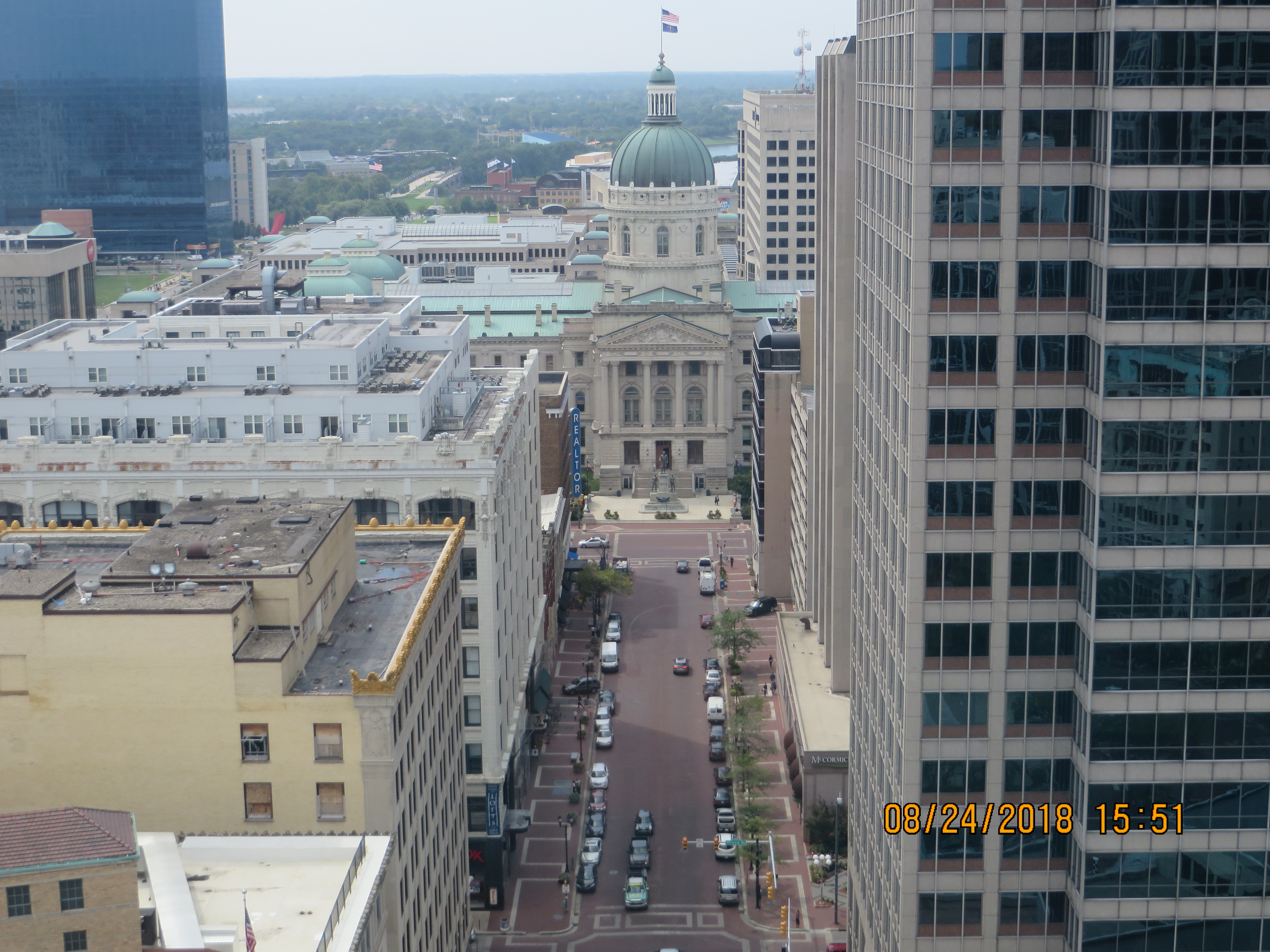 The view from the top.

On Saturday morning, our first stop was at the home of Benjamin Harrison, the 23rd President of the United States. Brigadier General Harrison, as he preferred to be addressed, is the only US President from Indiana, although the state has produced six United States Vice Presidents. We had a tour that lasted over an hour and we traipsed all over that house. Only one room was cordoned off. The formal parlor was off limits because the rug in that room was original and they don’t want thousands of people stomping all over it. Benjamin Harrison was the grandson of William Henry Harrison, the ninth president and the one whose tenure in the White House was very short since he took ill immediately and died after only one month in office. Most of the furniture in the home belonged to the Harrison family. The home is very large and beautiful and our visit was time well spent. By the way, President Harrison was the last president to have a full beard. In the many paintings around the house, he looks like, with a quick change of clothes, he could be in the band ZZ Top. 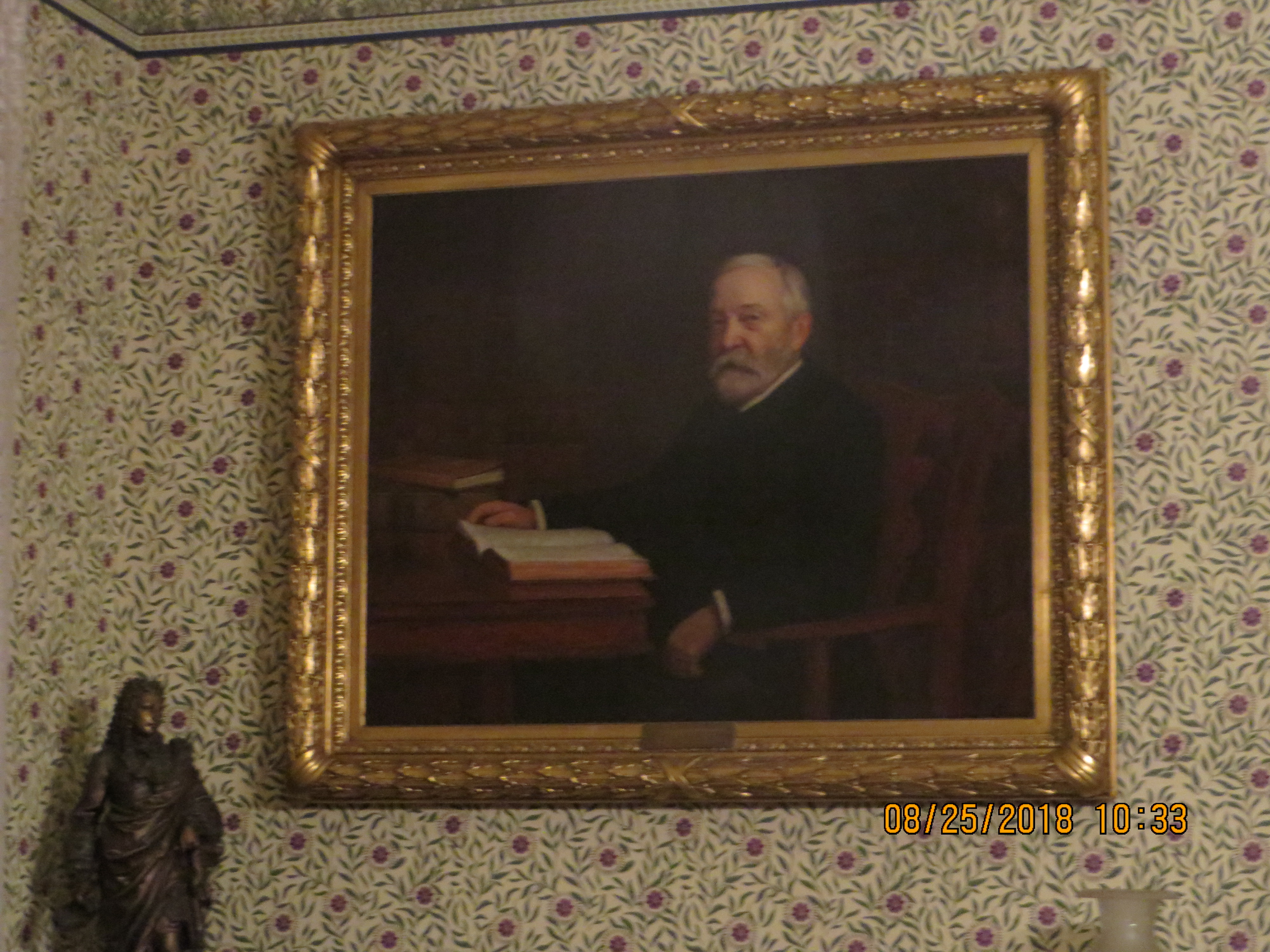 Nehemiah was our next Uber driver, and he took us to Speedway, Indiana. (Yes, there really is a town by that name.) We originally did not plan to visit the Indianapolis Motor Speedway (AKA “The Brickyard”), but we gave in to pressure from absolutely EVERYONE in town and headed to the Indy 500 Hall of Fame. Talk about a fish out of water! I could not possibly care any less about any sport, but I so love old cars, so I figured I’d enjoy it from that standpoint. We ended up having a really good time. Logan drove the three lap simulator car and got the car up to an average of 253 miles per hour. Pro tip: hit the ditch when you see him driving around town. 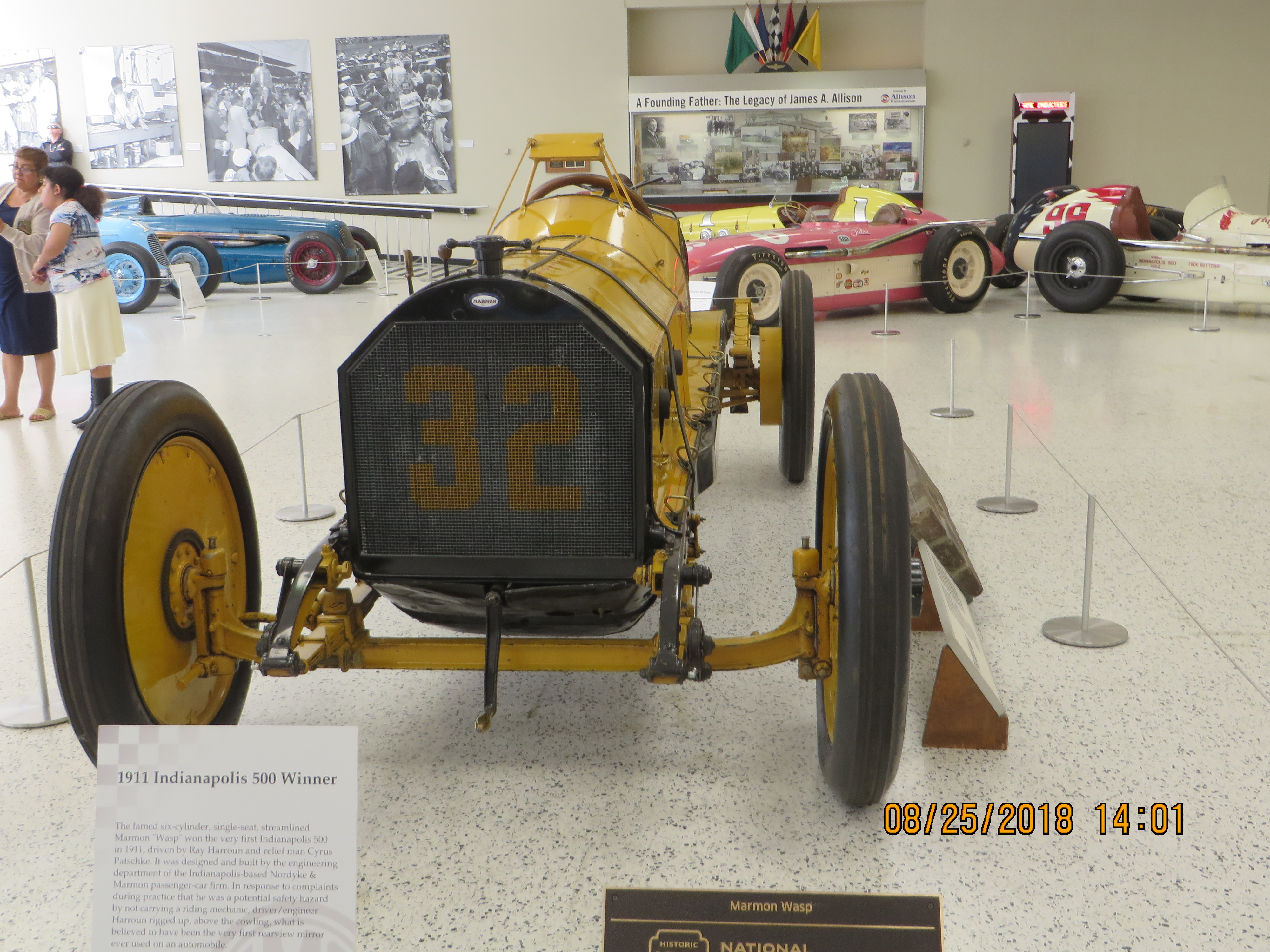 These old race cars are fantastic! 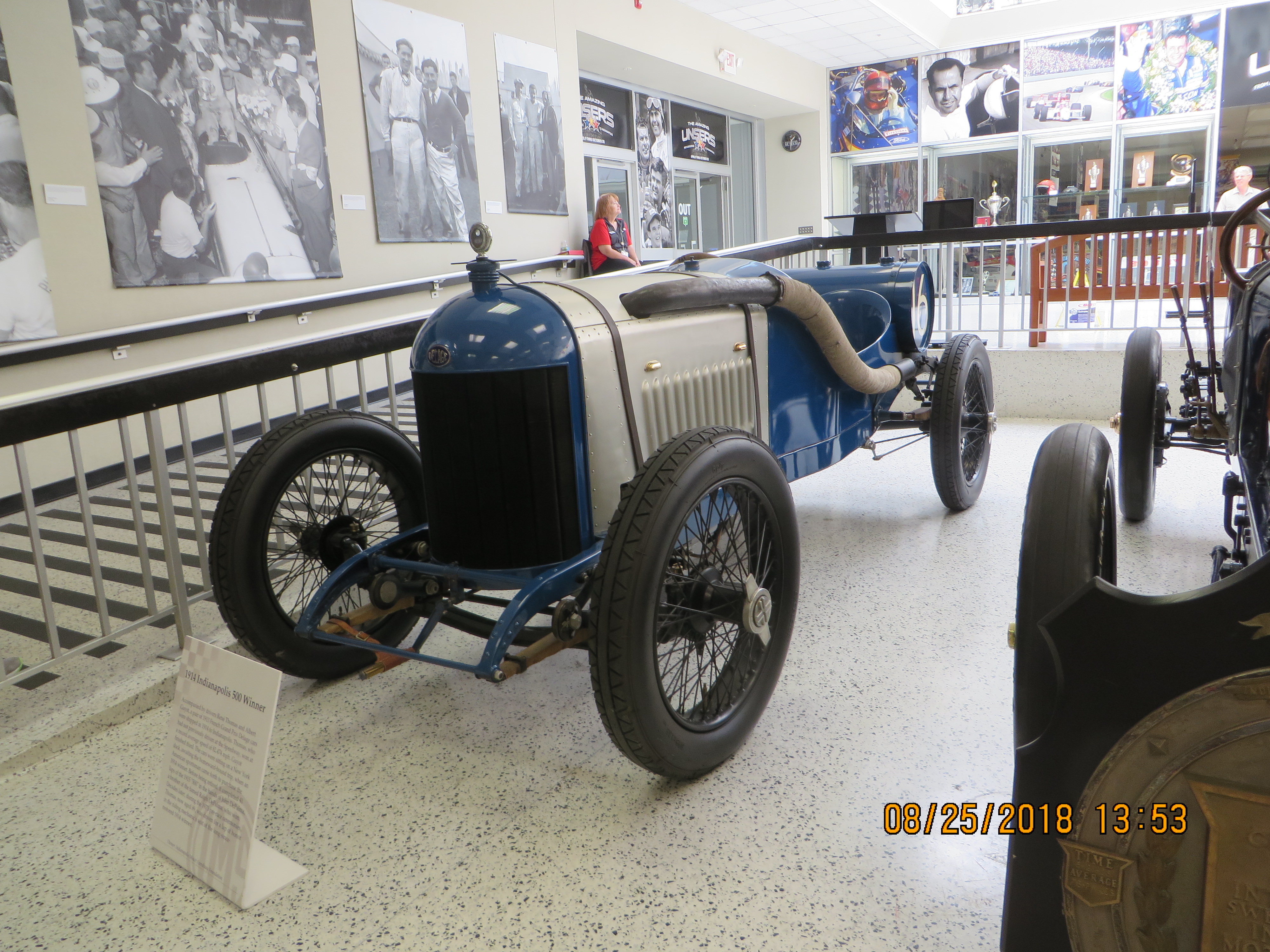 You may be curious about how big “The Brickyard” actually is. Then again, you may not be, but I need to wrap this post up somehow, and this seems like a pretty interesting way to do that. So, just for fun, I am going to tell you what world famous places can fit easily in the center of the track at the same time with room to spare. Here goes:  Churchill Downs, Vatican City, the Rose Bowl Stadium, the Taj Mahal, the Roman Colosseum, the White House, Liberty Island, and Yankee Stadium. Yeah, it’s that big! 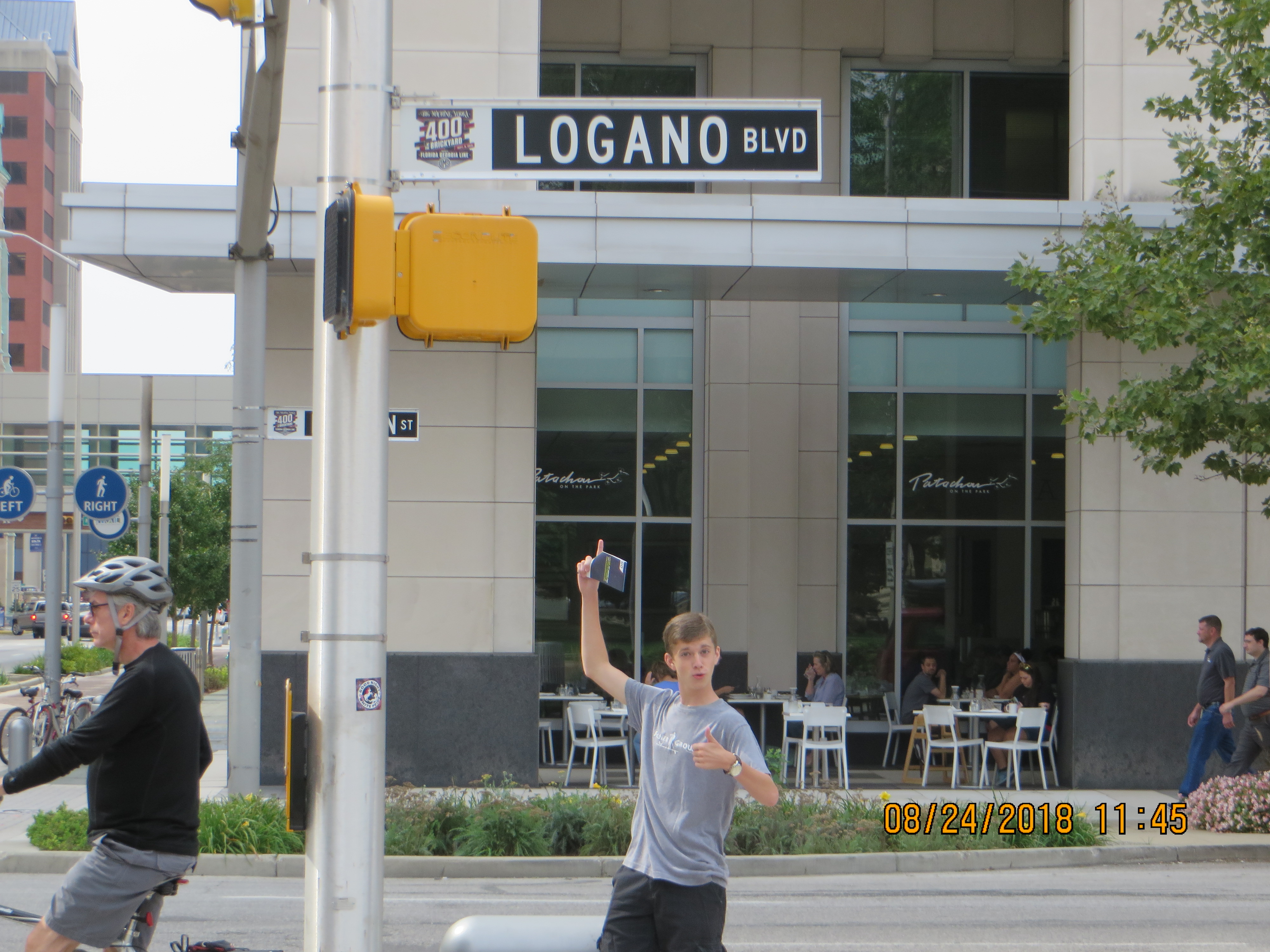 Imagine that! In town for less than twelve hours and they name a street after you! 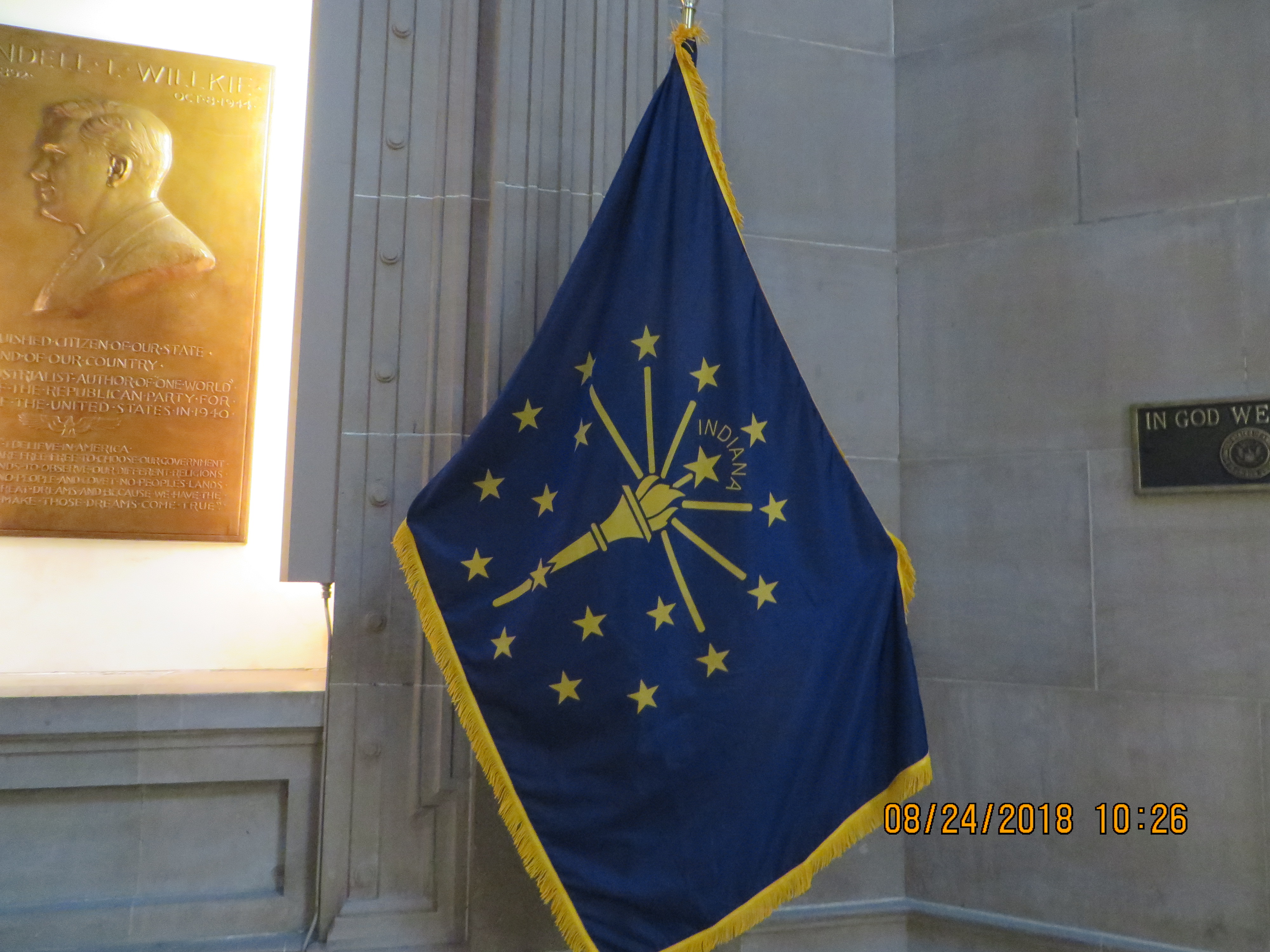 The Indiana state flag. The thirteen stars that make up the outer circle are for the thirteen original states. The inner circle has five stars for the next five states. The star at the top of the torch is for Indiana, the nineteenth state admitted to the USA.