Nothing to See Here

“It is hard to understand why our town must be destroyed to make a bomb that will destroy someone else’s town that they love as much as we love ours. But we feel that they picked not just the best spot in the US, but in the world. We love these dear hearts and gentle people who live in our Home Town.”   –Hand-printed sign created by Bonner Smith on the outskirts of Ellenton, SC in 1950 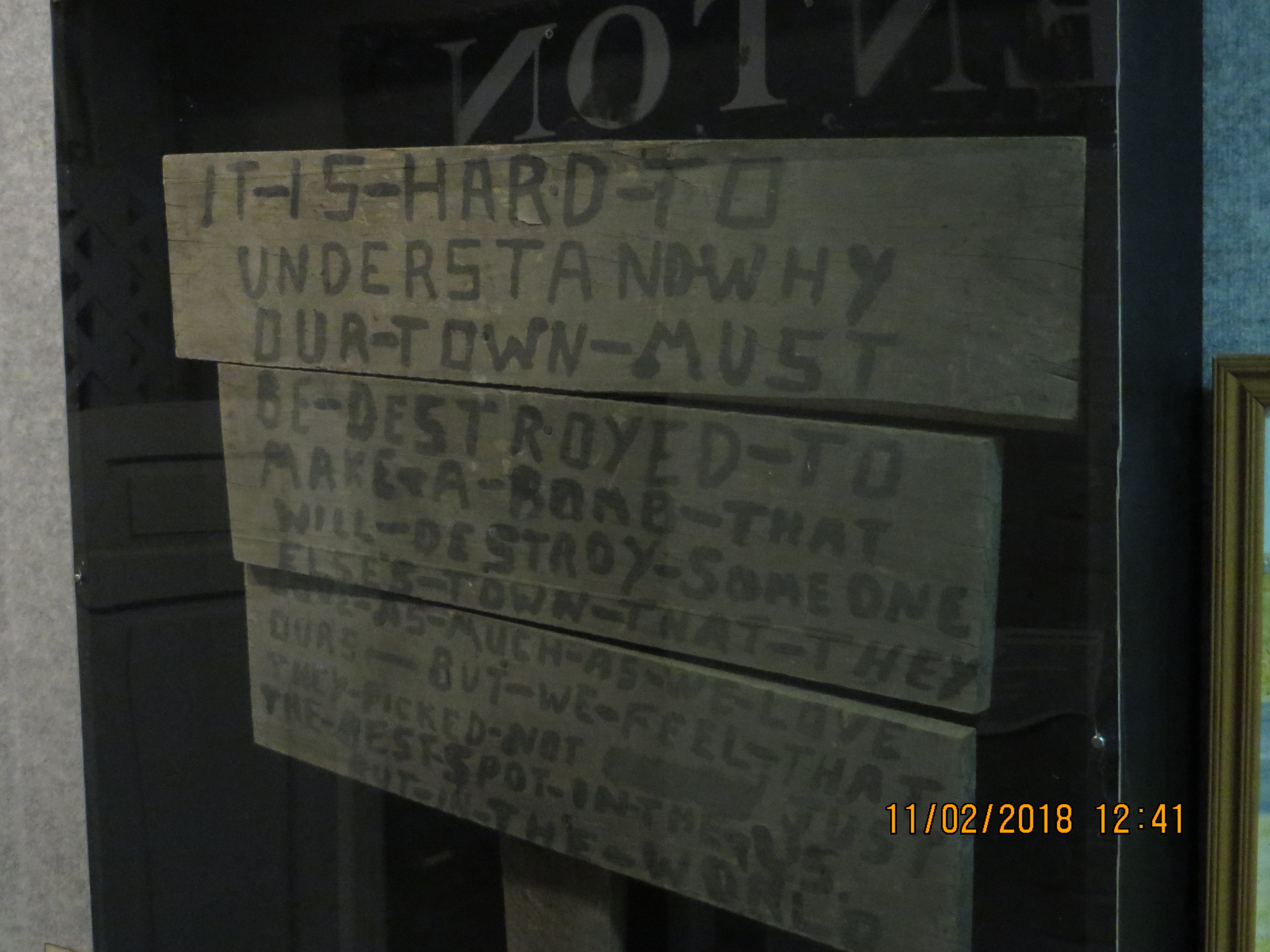 All my life, I’ve heard stories about Ellenton and Dunbarton and the other small towns and communities in the path of SRP. You can’t grow up in the shadow of the Savannah River Plant (now called the Savannah River Site, but AKA “the bomb plant” or, as my dad called it, “the bum plant”) without knowing that there were little towns that ceased to exist in the wake of the announcement that SRP was to be built in the early 1950s. It’s not unusual for little towns to slowly fade away. It happens a lot when a new interstate highway comes through an area and travelers no longer drive the backroads since we are always in a big hurry and need to speed along on the interstates. But towns like Ellenton and Dunbarton are two of the towns that can mark the exact day they ended. Death, for these towns, came swiftly and without any debate by the residents. They had no vote. These farming towns, and a few more rural communities in the area, closed forever on March 1, 1952. Having the chance to see what remains of the places where the sleepy little towns once stood was something I’ve always wanted. To me, it’s akin to visiting ghost towns. Finally, I got my wish last week, but there is nothing left to see. All that remains of Dunbarton are a few dirt roads. 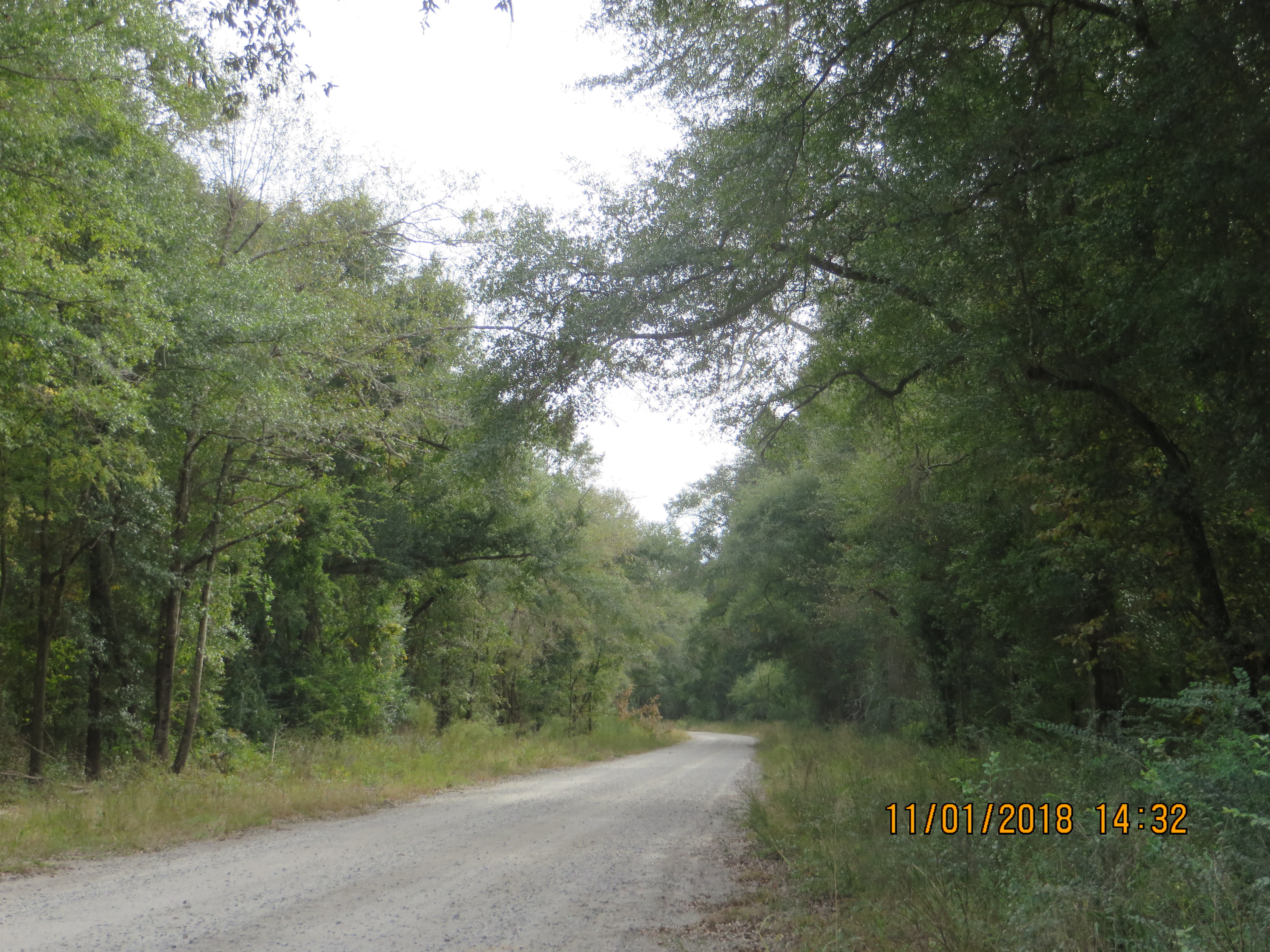 The town of Ellenton can trace its beginnings back to 1873. Supposedly, Dunbarton goes back to around 1800, but the town was not incorporated until 1910.  While Ellenton grew to just over 725 residents, Dunbarton was a bit smaller at around 300 residents. The railroad was coming through the 112 miles from Port Royal, SC to Augusta, Georgia, and a Mr. Millett was the construction superintendent. He was tasked with securing the rights to build on land in the path of the railway. His friend, a man named Mr. Dunbar, gave land to the company for right-of-way passage. Farmers began to populate the areas adjacent to the train stations along the route, taking advantage of the railroad for moving their crops. Other than being little whistle stops on the railway, Ellenton, Dunbarton, and the other little communities had no claim to fame, but many families had deep roots in these areas. 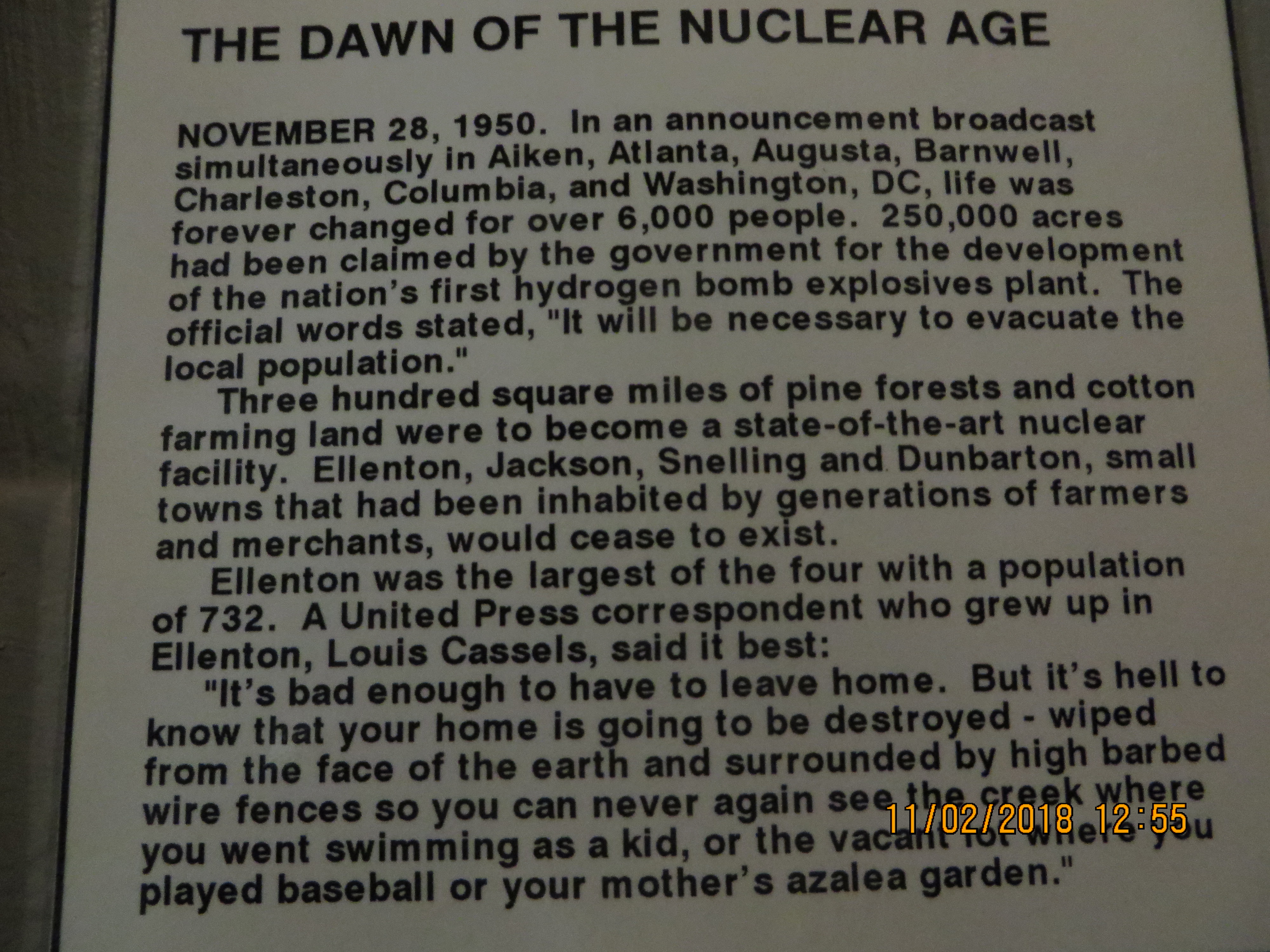 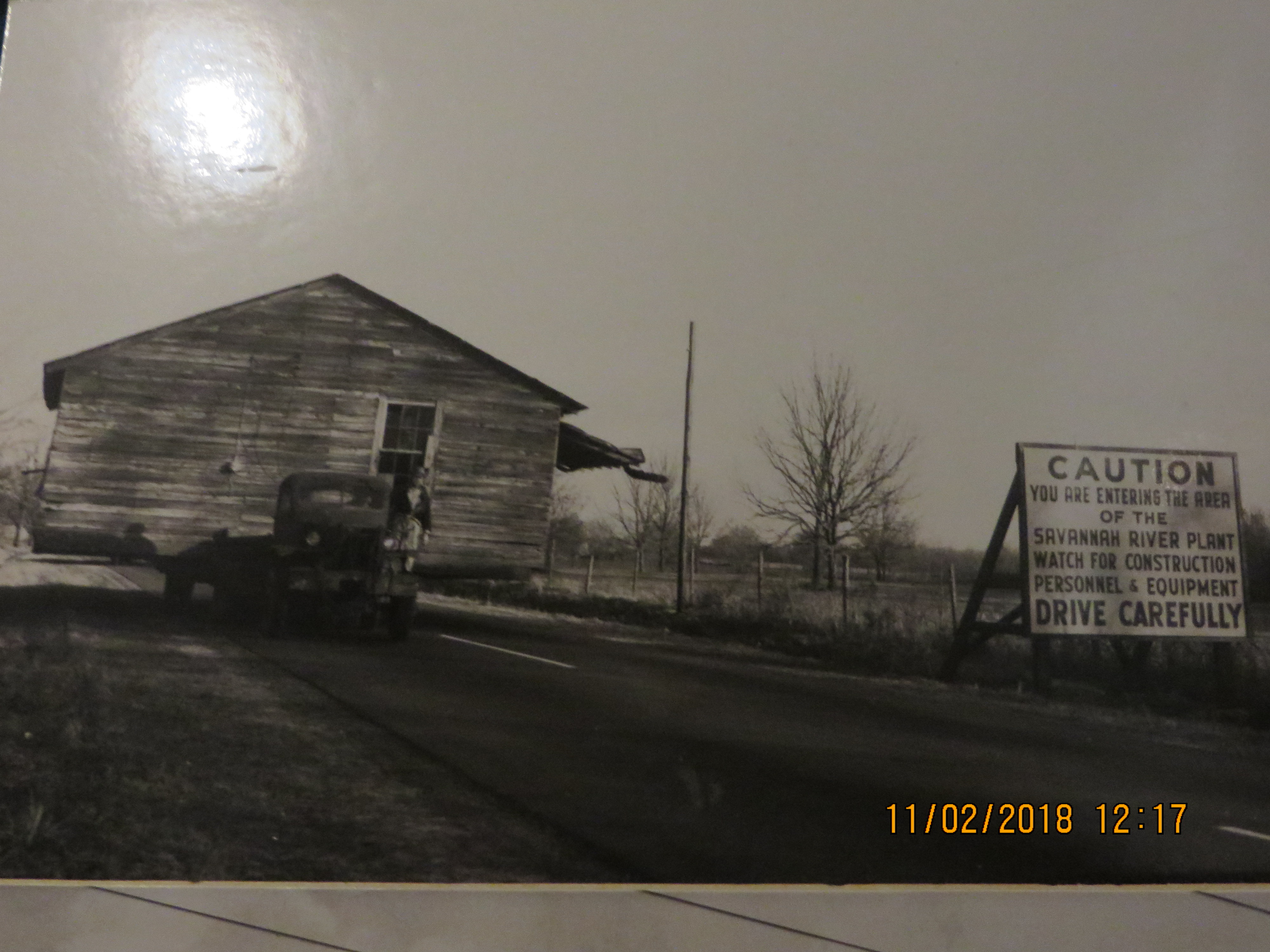 Some structures were moved, but most were demolished.

The small town country life enjoyed by the residents of Ellenton and Dunbarton came to an abrupt halt on November 28, 1950 with the announcement of plans to build what has been called the nation’s single largest building project since the construction of the Panama Canal. The citizens of Ellenton and Dunbarton and other nearby communities were basically told that they needed to “take one for the team,” because the nation needed to produce nuclear weapons materials due to the fear of World War III looming large after the Soviet Union surprised the world by detonating a nuclear weapon in 1949. The CSRA (Central Savannah River Area) was the area best suited in the United States when all factors were taken into consideration. The residents of these farming communities had little time to pack their belongings, close their businesses, and make plans for moving graves of loved ones. Some had no time to adjust to the life-changing event, like a gentleman featured in a YouTube video interview. He was allowed to return to Ellenton a few years ago. This octogenarian was on a ship in Japanese waters when word came that the town needed to be abandoned. He left home as a young sailor with the US Navy, having no idea that he would not return to Ellenton for many decades, and that the town would be long gone when he did.

Some 38,000 workers came from far and wide to build and run the Savannah River Plant. My dad was among that number. He left the family dairy farm business with my mother seeking a better life for his family when he was hired to document on film the construction of the plant. They moved from Spartanburg County to Aiken in 1952. When the construction was complete and the plant converted into what was called the operations phase and the reactors went “critical,” he was kept on the payroll to continue the photographic documentation of the work at the plant. Absolutely nothing goes undocumented in a facility such as SRS.

People from all walks of life were hired to build and operate the plant. All levels of expertise and education were needed. Nuclear physicists, brick layers – there was a job for every skill. It turns out that two of those workers brought in to build the plant were brothers Eugene and Eulie David. Those names mean nothing to you unless you are a big fan of the cast of the 1939 classic movie “The Wizard of Oz.” These diminutive brothers were among the actors who played the Munchkins in the movie. They were also skilled welders and their size gave them a huge advantage when welding in tight places. The pipes that brought in water to cool the super-hot nuclear reactor cores were about waist high to the other welders. Since they stood at under four feet tall, their height (or lack thereof) was a big benefit when welding in these long pipes.

A few years ago, SRS added a couple of tours that look at the area from a historical point of view. When I got wind of these “From Farms to Fission Tours,” I started planning to get in on one of those tours so that I could see what is left of the little towns that were a casualty of the construction of SRP. I could not make it happen last year, but I think I signed up for this November 1 tour December of 2017. I only phoned the schedule lady two or three times, so any accusations of my stalking her are completely without merit. To complete the SRS experience, we studied the exhibits related to SRS in the Aiken County Historical Museum and we also stopped at the Savannah River Site Museum in Aiken. It is housed in the former Dibble Memorial Library building. That was the county library when I was growing up in Aiken. I spent many wonderful afternoons there, sometimes actually doing schoolwork. 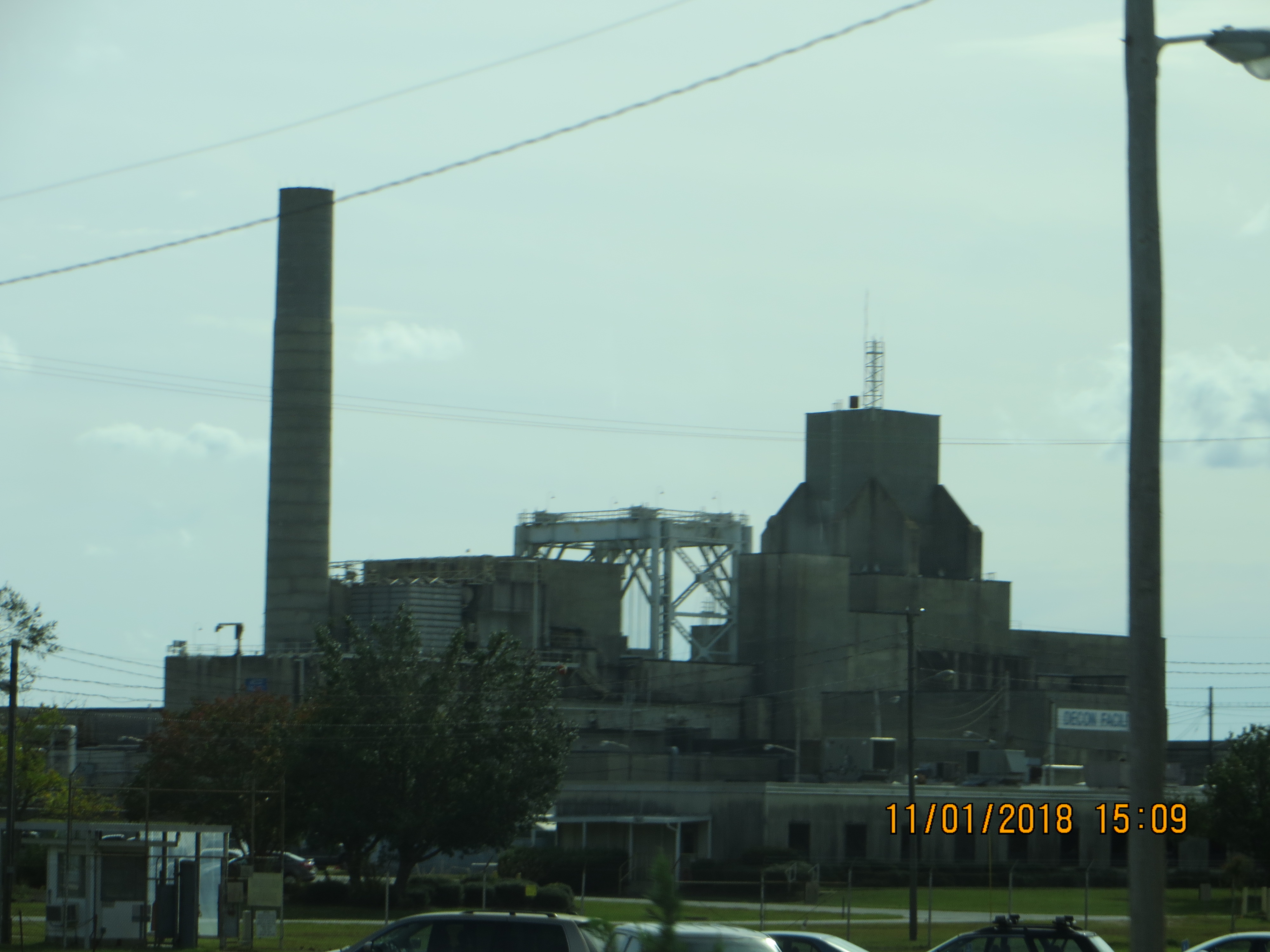 Both the SRS Museum and the Aiken County Historical Museum have many old photographs that are not credited, but I am sure were taken by my dad over the decades he was plant photographer. For this reason, walking through the Aiken museums was poignant and personal to me. (How weird is it to admit that I felt close to my dad when looking at old pictures of nuclear reactors?) I think I can relate to the heartfelt sentiments in the words below from a song by Jesse Johnson and Dixie Smith. The song, entitled “The Death of Ellenton,” is from the production “I Don’t Live There Anymore.”

‘Oh, the friends we know and love,

We’ll meet upon some other shore,