“Our history is a blend of beauty and pain, grace and war, great storms and calm seas. We are a melting pot of cultures and customs, remade with each changing tide.”—-Charlestonmuseum.org

I won’t put anyone on the spot by asking for a show of hands, but I am guessing that most of you have never walked through the doors of the Charleston Museum. I don’t mean to judge, but you really have no excuse. It’s the oldest museum in the country, so “it wasn’t there the last time I was in Charleston“ won’t pass muster. You really need to put this on your “to do” list. This is an incredible museum, especially if you love the South Carolina Lowcountry.

I visited the Charleston Museum as a kid. Way back over a half century or ago, I went with my next door neighbor and best friend, Wrenn, and her family to Edisto Beach for a week-long summer vacation. About mid-week, her parents piled all of us into the family Chevy sedan and off we went to Charleston, unencumbered by seat belts, with the windows down and hair blowing in the wind. Even after all these years, I remember being fascinated with the replica of the Hunley in front of the building. (Tell me again—how many men squeezed in there??) Frankly, that’s all I remember about that day. Keep in mind that this was a very long time before they pulled the real Hunley from its watery grave off the coast in 2000. Rick and I took some friends visiting from California to the Lasch Conservation Center out in North Charleson about seven or eight years ago to see the real Hunley. We need to get back out there with Logan. It’s a slice of history that no one should miss when in the Charleston area. 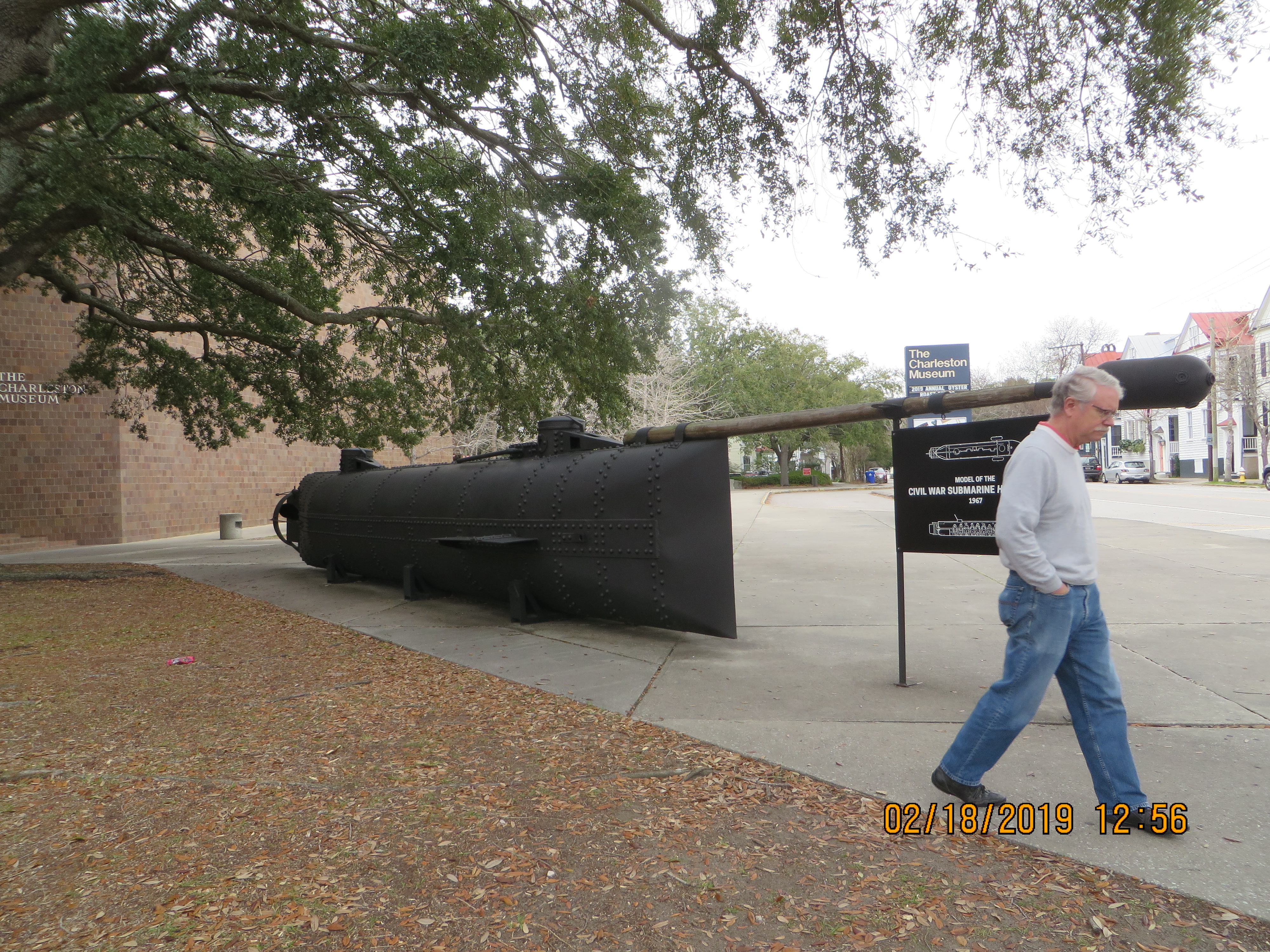 The replica of the Hunley is still there! It’s right where I left it over a half century ago!

Anyway, I forgot all about this museum until I came across an advertisement in Charleston Magazine for an exhibit called “#Yesterday in Microfashion: 150 Years of Charleston’s Children.” I’ve been buying children’s clothes for a long time, though not quite 150 years, so I knew right away that I had to see this exhibit. Rick and Logan readily confessed that they had less than zero interest in looking at baby clothes, but they love museums and road trips, so we jumped in the car and hit the road. (OK, I may have casually mentioned stopping at Boxcar Betty’s for lunch. Good grief, those two are so easy.)

I’ll be honest: the exhibit on children’s clothing was a bit of a let down, but that was all right because the museum has so many other areas that are really fabulous. Still, I liked seeing all the little shoes and boots. From looking at how out of focus this picture is, one might think I was trembling with excitement. I really wasn’t that excited, but I did think for a second that I was back at the Bata Shoe Museum in Toronto! 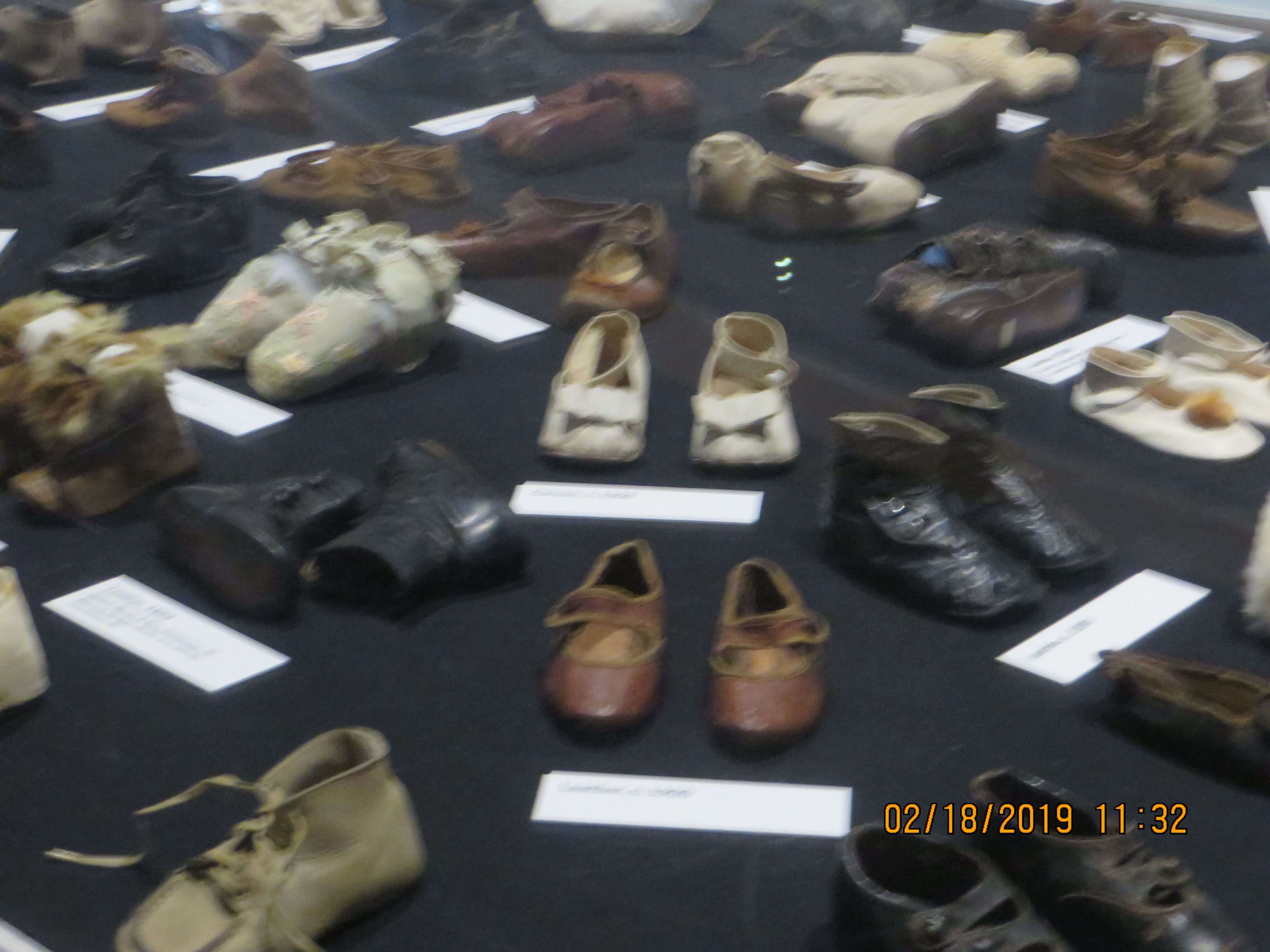 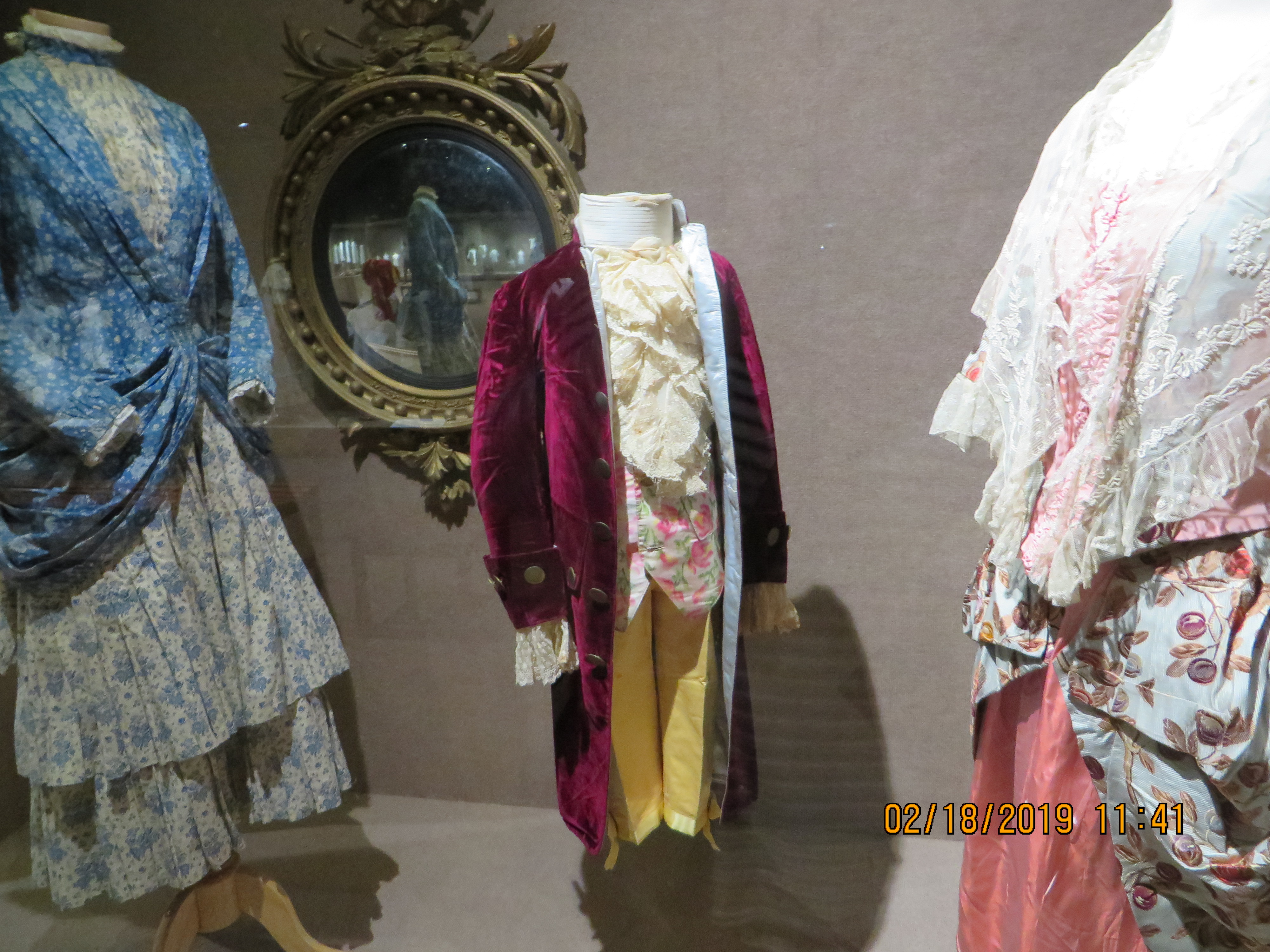 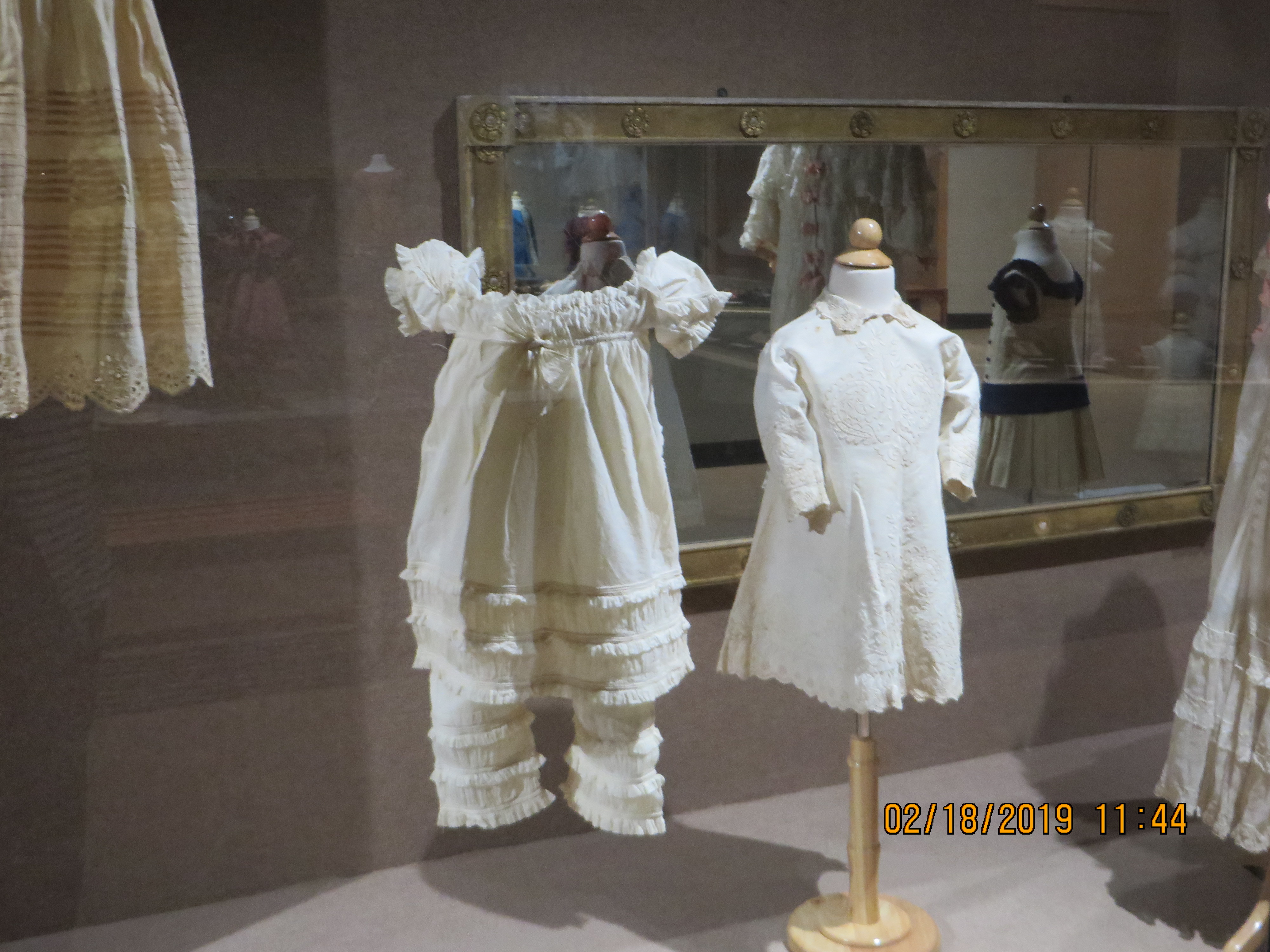 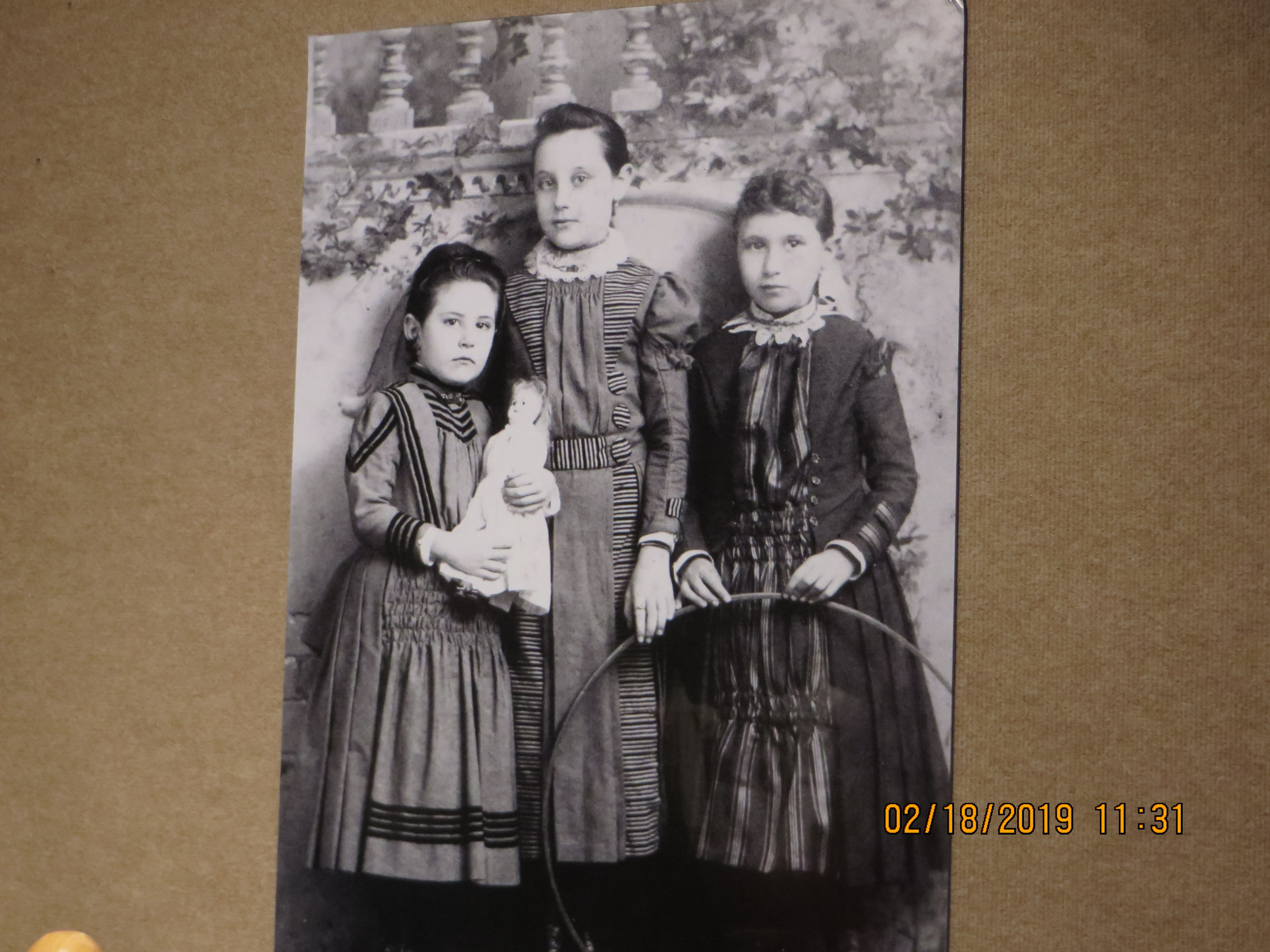 The Charleston Museum was founded in 1773 on the eve of the Revolutionary War and is regarded as the first museum in the nation. Inspired in part by the creation of the British Museum, the granddaddy of museums, it’s mission is to tell the story of South Carolina and especially the South Carolina Lowcountry and Charleston. They are succeeding magnificently. The museum suffered a fire not long after its founding, but resumed collecting around the end of the 18th Century. Acquisitions were put on the back burner during the Civil War, but the museum has been going strong since.

And speaking of the history, check this out from way, way back. The Charleston Museum has the skeleton of a pelagornithid, the largest flying bird ever known. (I read that there were larger flying animals, but not larger flying birds. It seems that all flying creatures back then were not birds, but that’s a subject for another day.) The pelagornithid skeleton was unearthed back in 1983 when they were building a new terminal at the Charleston International Airport. It was so big that it was proclaimed to be a new species of pelagornithid and was named Pelagornis sandersi after the former curator of natural history at the museum, Albert Sanders, who had it excavated from the construction site. This fellow weighed in around 50-90 pounds, had short, stumpy legs, and his age is somewhere in the millions of years. The bird, not Mr. Sanders. 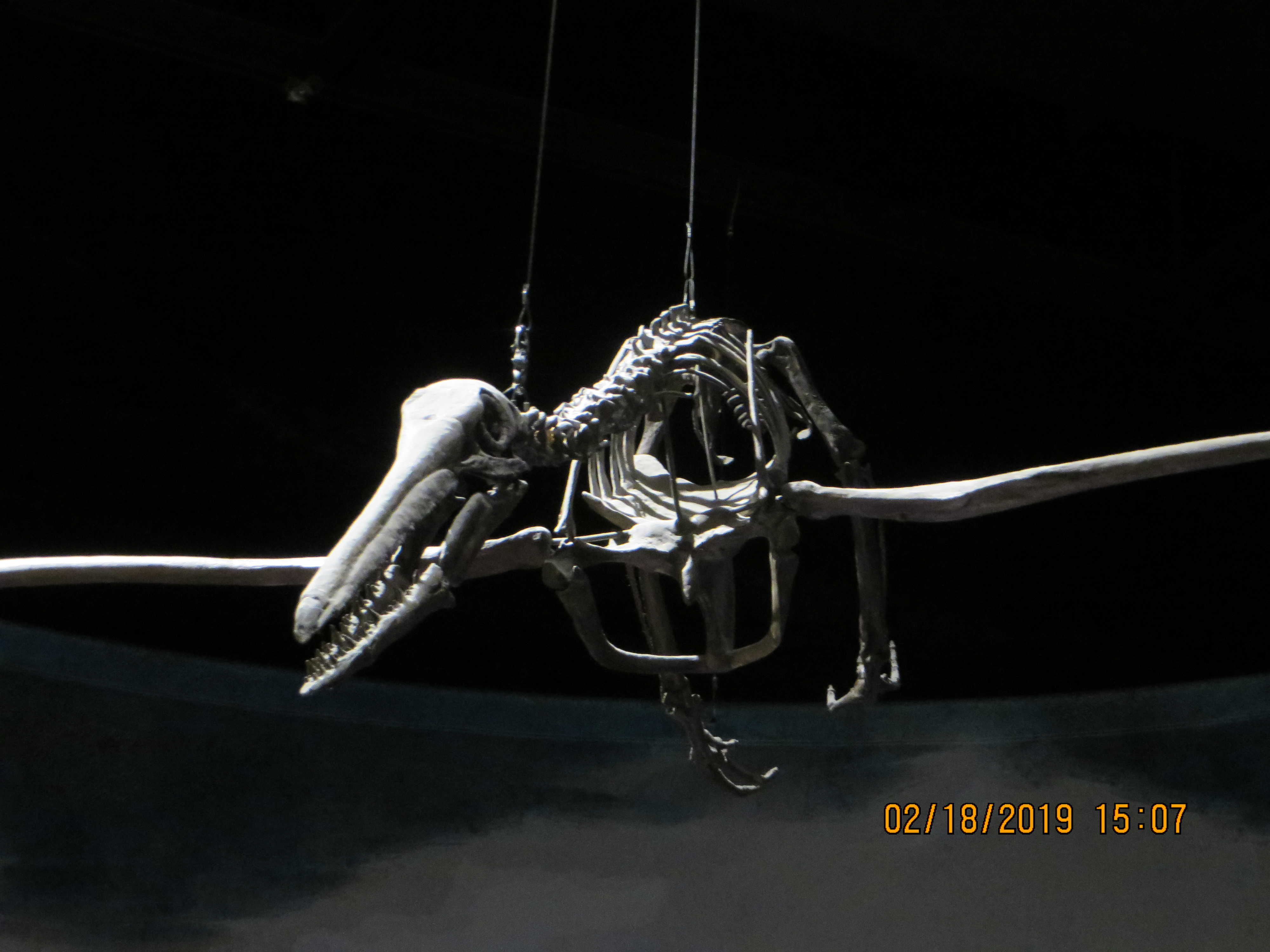 The Pelagornis sandersi must have been a formidable looking creature in the sky. 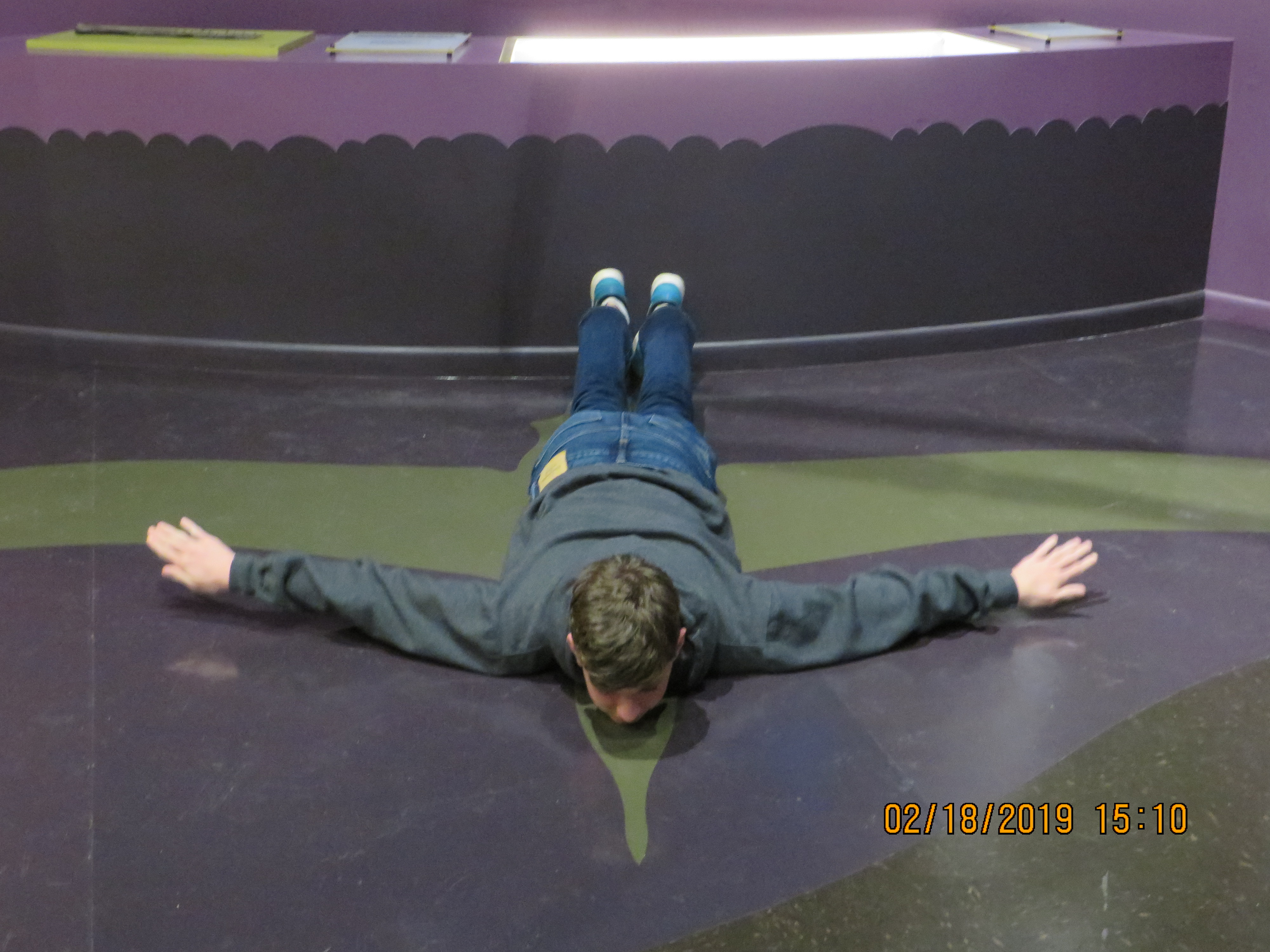 Logan’s wingspan isn’t nearly as wide as the P. sandersi, but on a positive note, his legs aren’t short and stumpy like the legs of this prehistoric bird.

The museum has a large collection of silver. At one time, there were seventy-five silversmith shops in Charleston. Before the Civil War, the city was one of the wealthiest in the country and the citizens furnished their homes with mighty fine things. I was intrigued by the christening cup that belonged to George Washington. I’m sure there is a perfectly good explanation as to why it is in Charleston and not at Mount Vernon. 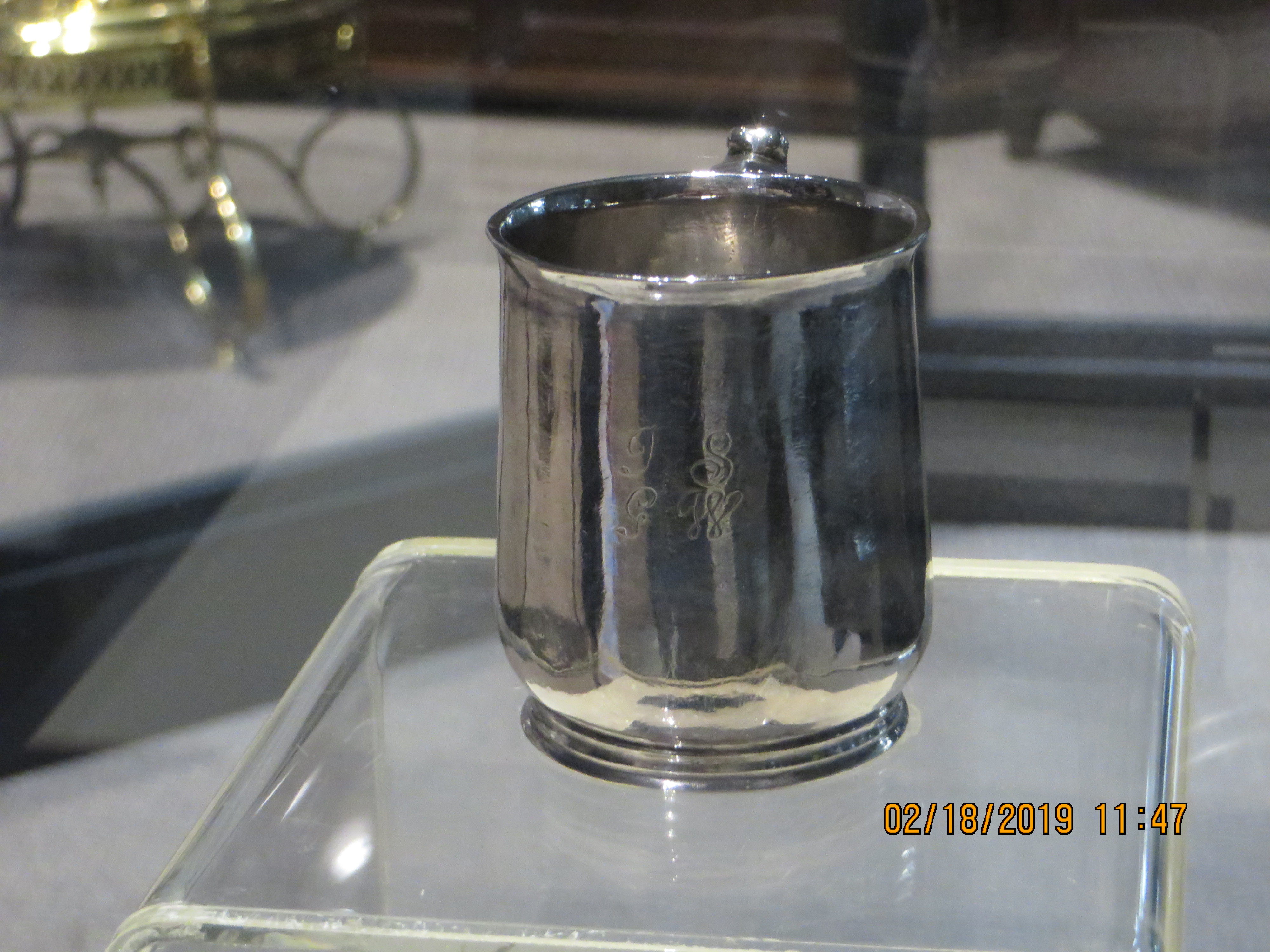 The museum houses a very large collection of weaponry spanning the years from around 1750 to the 20th century. There were all kinds of knives, swords, guns, rifles, and cannons. I finished looking and moved on in just a few minutes, but it took Rick alot longer to take it all in. I did, however, stop to photograph the funny looking rifle shown below. 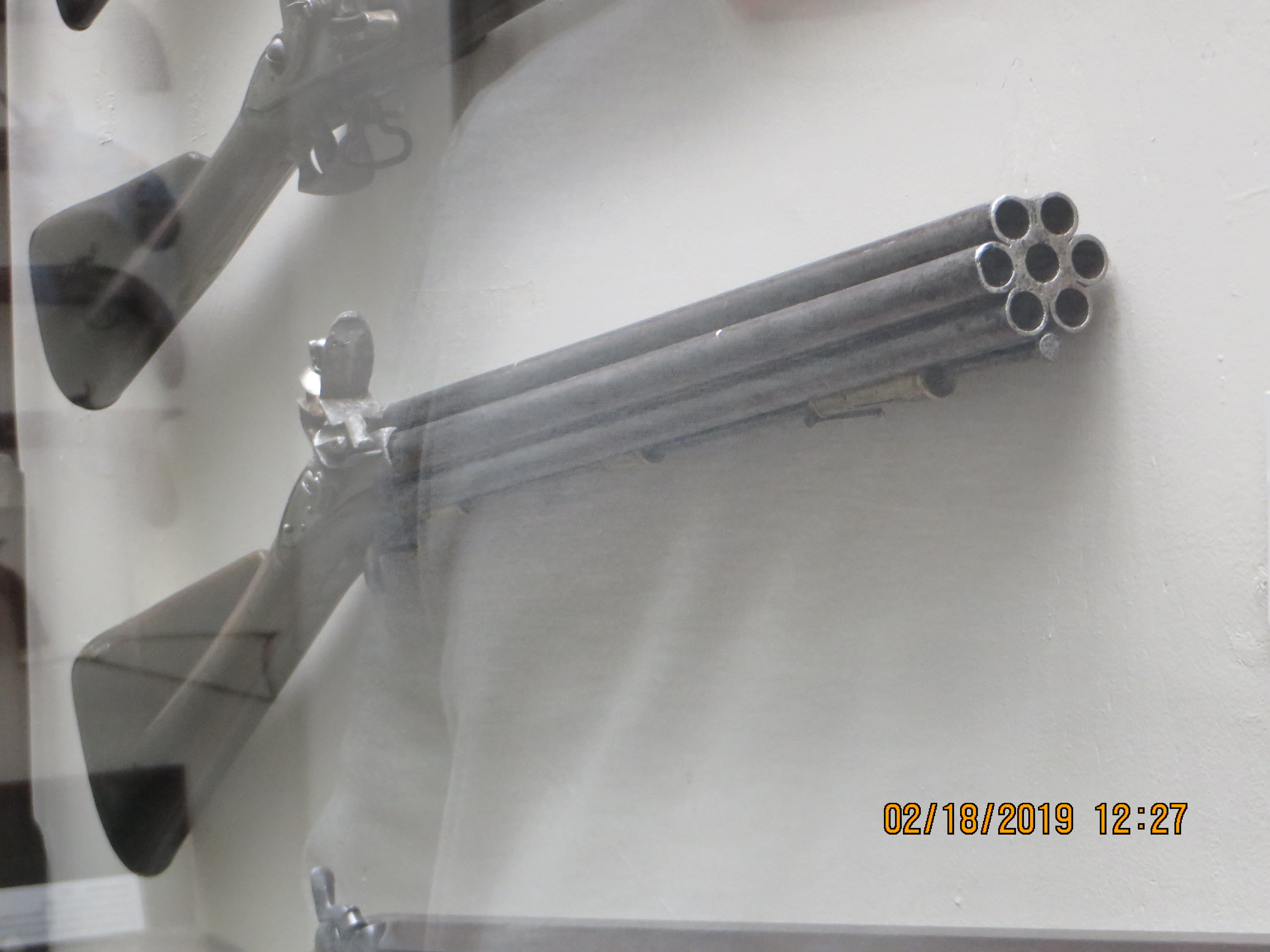 While Logan’s favorite area was the natural history gallery, Rick and I enjoyed the galleries that told the story of life in Charleston and South Carolina through the centuries, spanning time from the pre-Revolutionary War period through the Civil War. The museum has amassed a stunning collection of artifacts and they are displayed well. They also had a section on the great earthquake of 1886. I was curious as to why they have no section on the hurricanes that have struck the Lowcountry. Hurricanes have had a huge impact on life in the Lowcountry and continue to do so. Perhaps there just is not space. The museum is not large and they have much to present. They do seem to use space well; what a great idea to display old chamber pots in the ladies’ room. Below is a picture I snapped in the restroom. After that photograph, I will show some of the oddities displayed at the Charleston Museum. I hope you are enticed to visit this little gem of a museum. 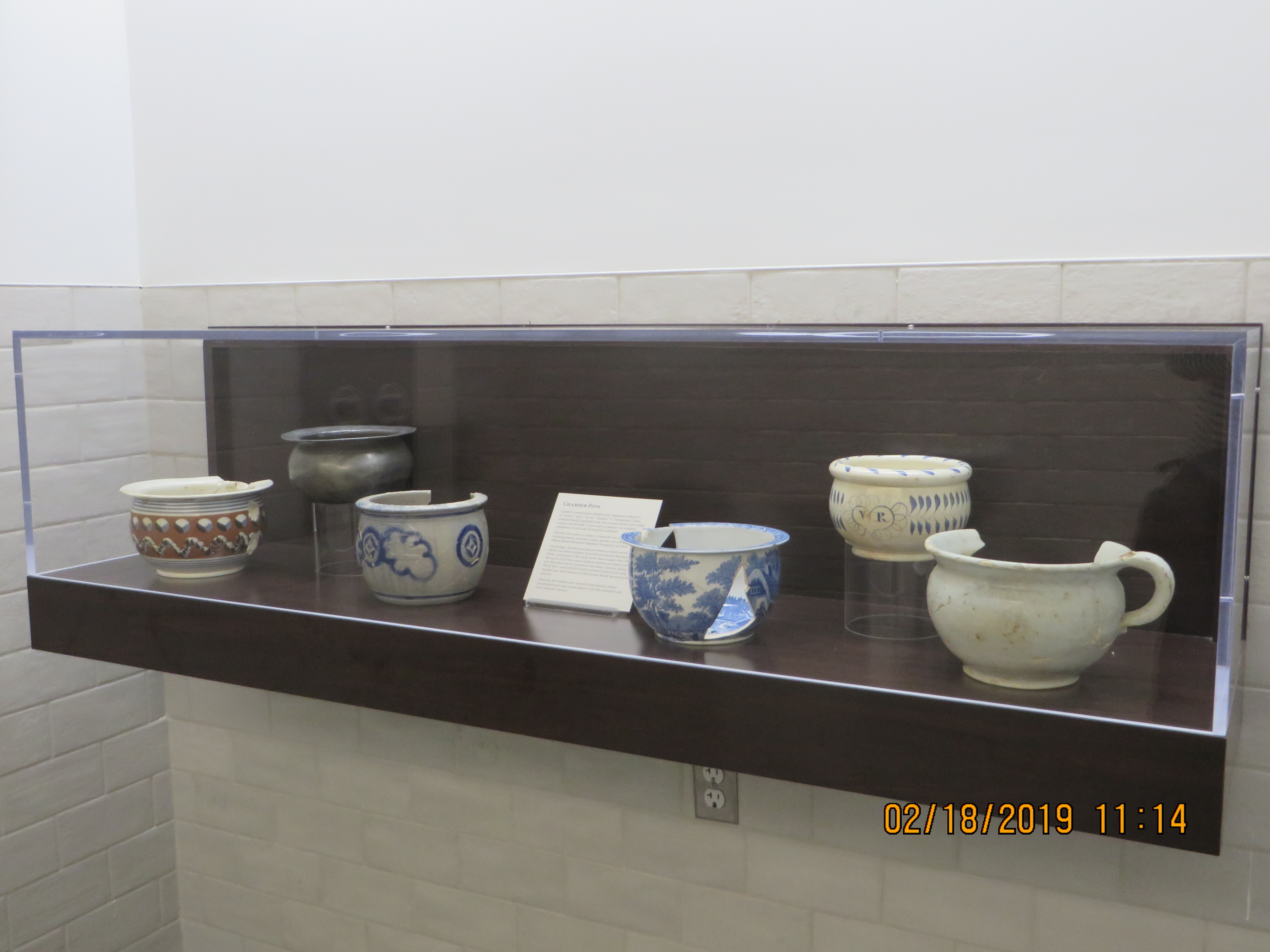 What better place to display chamber pots than in the restroom! 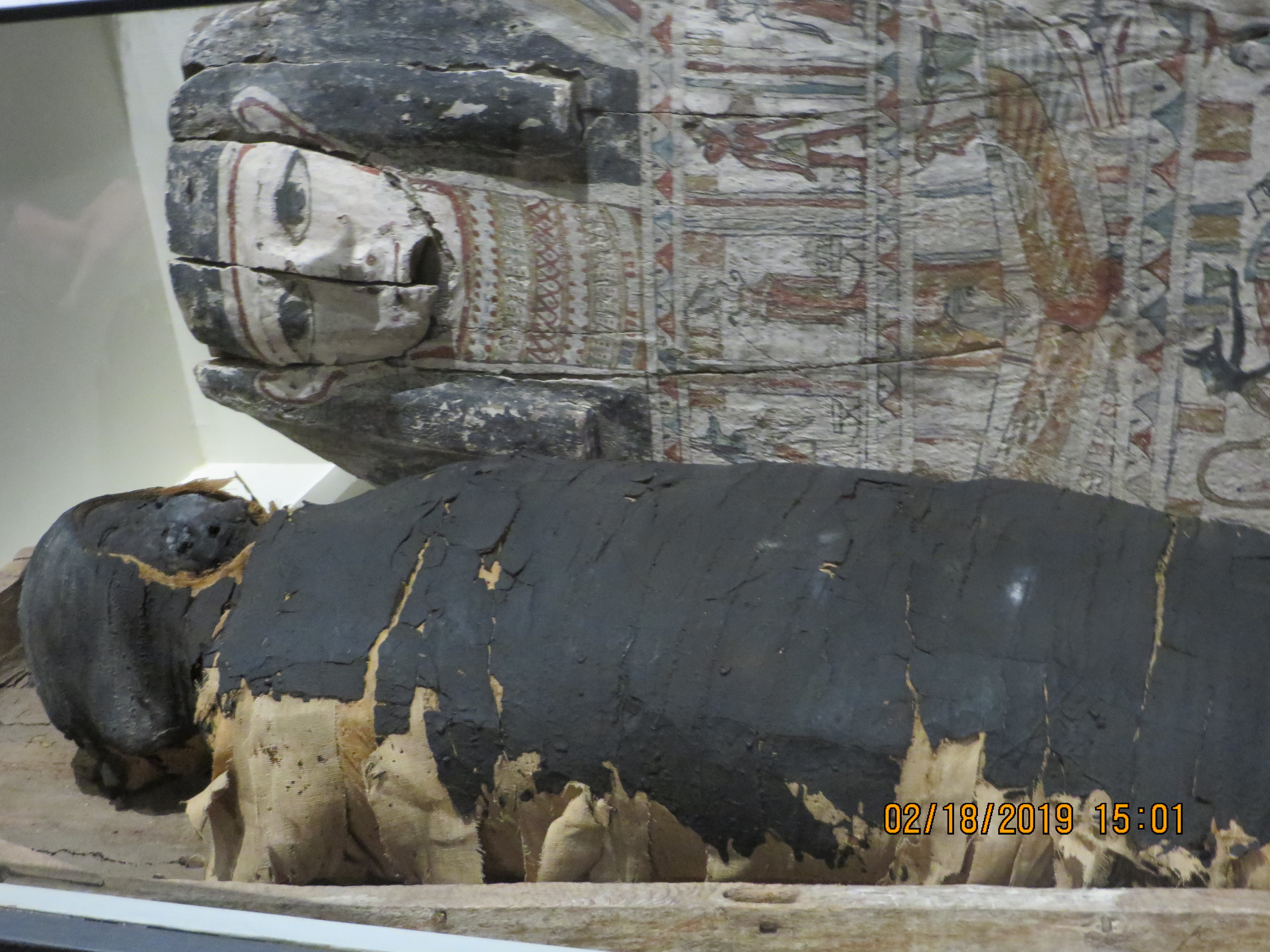 I’m guessing that you can’t call yourself a museum without a mummy, amirite?? 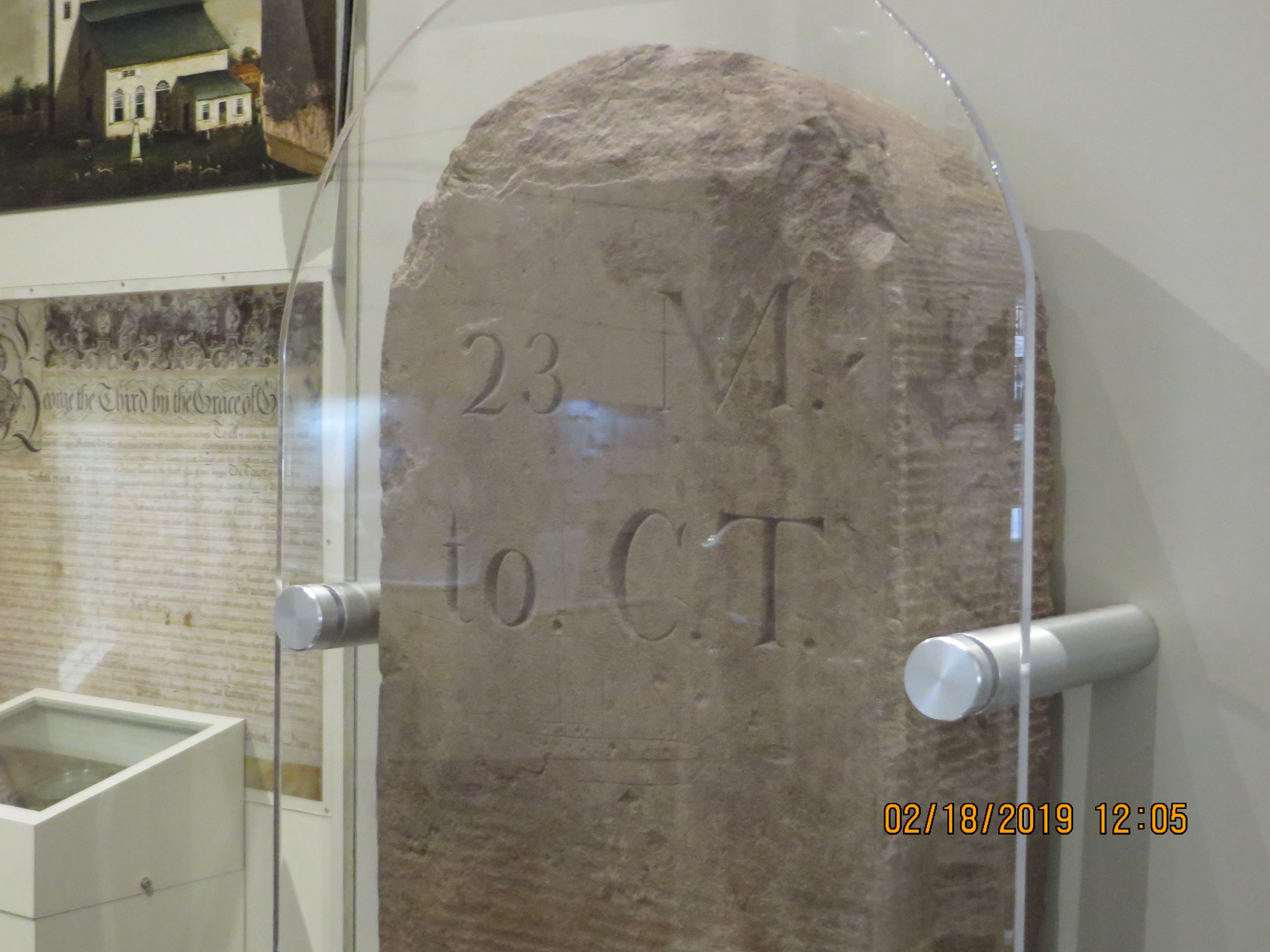 We loved this old road sign from the Jacksonboro area: It tells travelers “23 miles to Charles Town.” 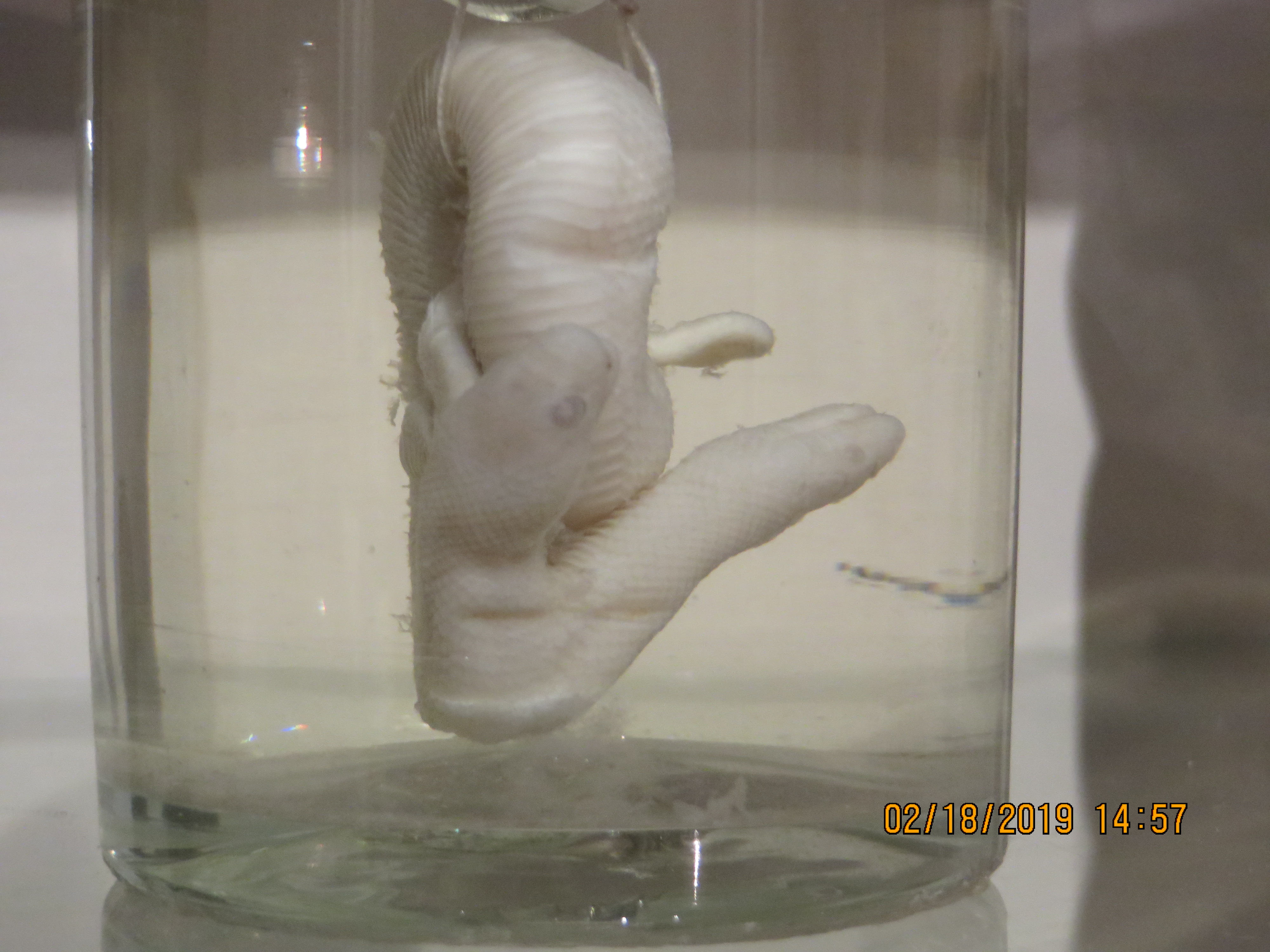 I ask you – what museum is complete without a two headed snake in a jar? 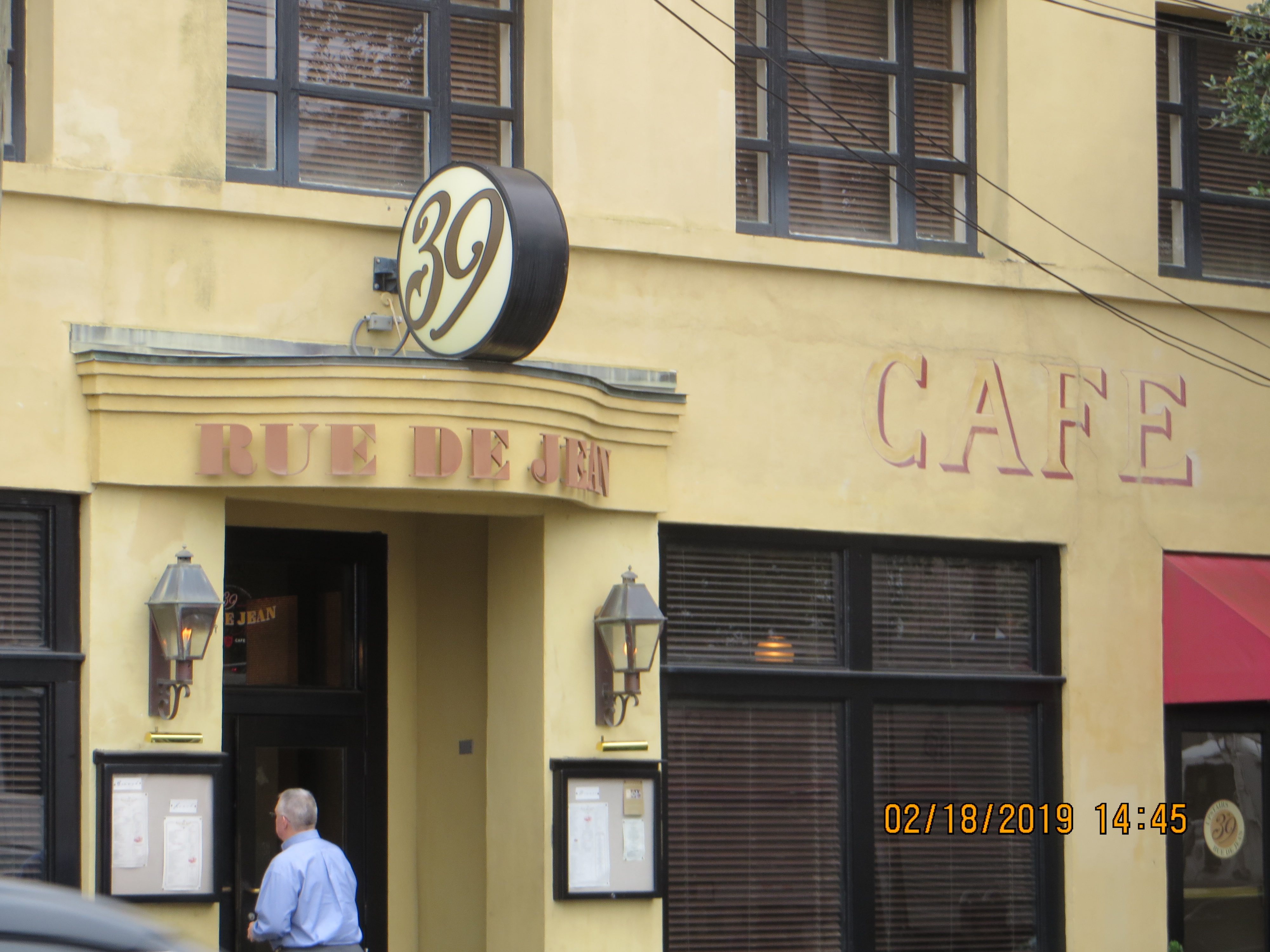 We stayed so long at the museum that we had to break for lunch, so no stop at Boxcar Betty’s on this trip to Charleston. We did, however, love us some mussels at Rue de Jean, which is just steps from the museum and a perfect spot for taking a little museum break.