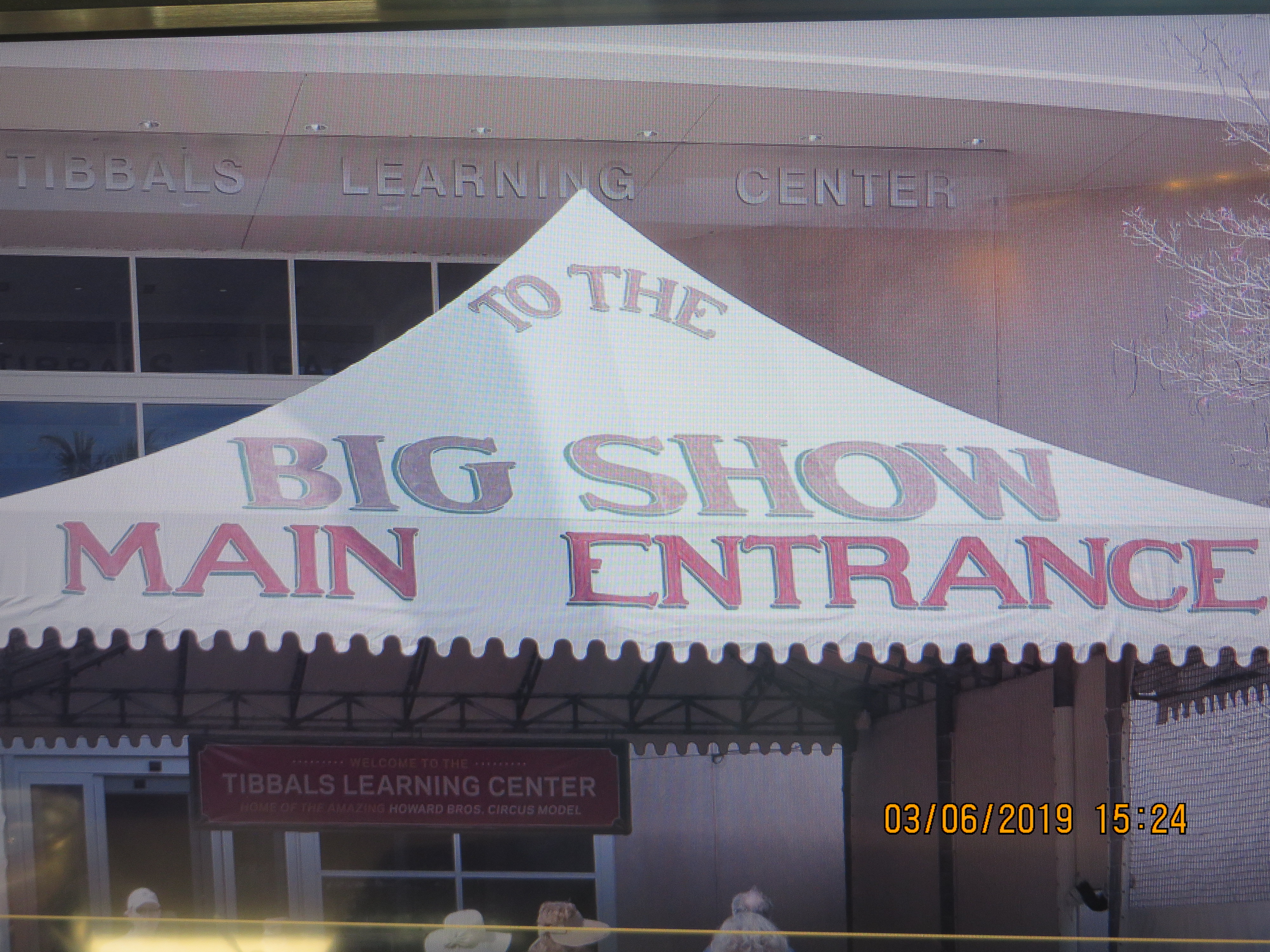 The Ringling. What a place. It is essentially John and Mable Ringling’s enduring love letter to the city of Sarasota. The sixty-six bayfront acres are home to what was the Ringling’s winter home, Ca’d’Zan, Mable’s rose garden (the oldest rose garden in Florida), the Circus Museum, and the Florida Museum of Art, as well as the incredibly beautiful Asolo Theater. This theater was dismantled and moved from the Veneto region of Italy in 1930. It was reassembled and is housed in the Visitors Pavilion. In and of itself, the Asolo Theater is a work of art.

We arrived as they were unlocking the gates, taking no chance we would be late for our back-to-back tours of the mansion. We were an hour and a half early (old people are always early, never late), so we headed straight to the art museum, reasoning that we would spend an hour there and if we did not get back later in the day, we would have at least seen some of the massive collection. Plus, we felt that (sorry to admit it) there are lots of art museums in the country but, as far as we know, this is the only circus museum around and we wanted to save plenty of time for the circus exhibits. It proved to be a good plan. No way we had time or energy to go back. Eyes were glazed over and feet aching by 4:30 PM when we staggered to the car and we were in no way in the mood for more European paintings or Cypriot antiquities.

Nonetheless, I think it would be hard to overstate the size and quality of this art collection. The museum is incredibly well organized and the collection is second to none. Many of the works of art and sculpture were acquired by John himself, but there are also many pieces that were donated by other people and many acquired by the museum since John’s death. Two special exhibits were on display, one on post-World War II Japanese woodblock prints and one simply entitled Knights. Now, I like Japanese woodblock prints and even bought one in Tokyo, but this exhibit did not live up to my expectations. It’s not like I’m an expert, but I know what I like and I didn’t like those on display. Maybe its the pre-World War II prints that I favor; I don’t know. On the other hand, the exhibit on knights was phenomenal. The armor and weapons displayed were works of art. It might be time for a little disclaimer: When I was a kid, for some odd reason, my friends and I played “knights and ladies.” Talk about weirdo! I don’t know what little girls in other neighborhoods were playing (maybe cowboys and Indians?), but we were all about “King Arthur and the Knights of the Round Table,” so I loved seeing the horses all tricked out for jousting and the knights suited up for battle. 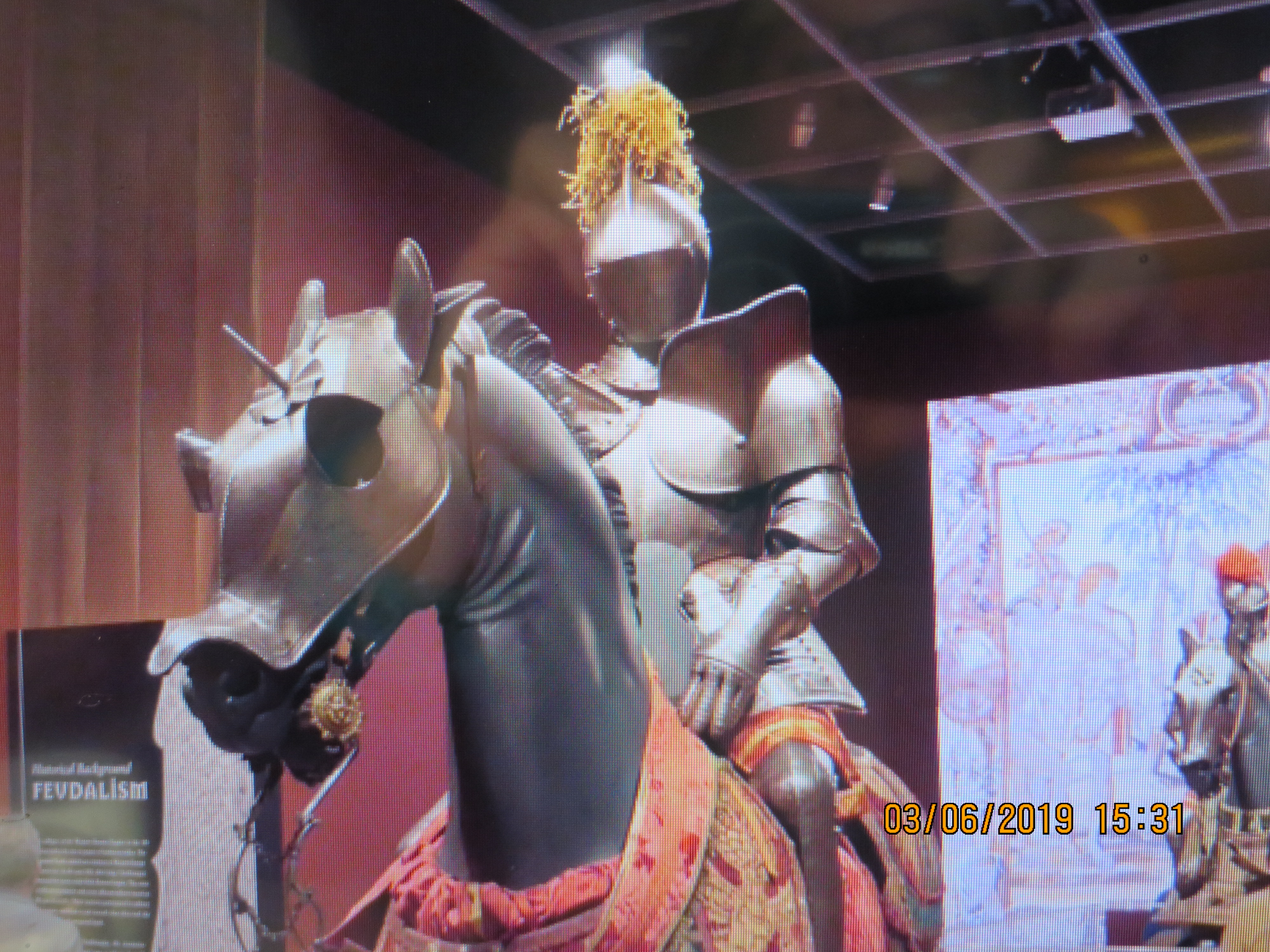 Nice protection, but it would rust in no time around here.

Time flies, so we hustled over to  Ca’d’Zan for our tours. The mansion is a fabulous glimpse of life in the Roaring Twenties. First we did “Mable’s tour,” which was basically the public rooms on the ground floor along with John’s bedroom and Mable’s bedroom. We then moved on to “John’s tour” which, with a much smaller group, afforded us time in many more of the guest bedrooms and even a trip up to the tower. The tower was the only place we were allowed to take pictures. We loved hearing about the construction of Ca’d’Zan, which began in 1924 and miraculously finished in 1926. I say “miraculously” because of the intricate work that went in to creating the home John and Mable envisioned. The artists and craftsmen involved were the most talented in the whole country and their work was the best of its kind. Mable was so all over this mansion building thing. The name out front, Ca’d’Zan, means “House of John” in an ancient Venetian dialect, but the architect’s renderings clearly refer to the mansion as “The Home of Mrs. John Ringling.” She came to every meeting with the architect lugging folders full of photos and postcards from Europe, tile samples from Italy, and the richest of fabric and paint samples. John and Mable traveled throughout Europe seeking the finest new acts for the circus and, along the way, saw so much of the continent. They were crazy in love with Italy, especially Venice. While building their winter home, she saw to every single minute detail, fashioning it after a Venetian palazzo although, as an Iowa farmer’s daughter, she had no formal training in architecture or interior design. Yet the woman knew what she wanted, and she knew that she could have it if she was willing to spend the money. And she was. And John was OK with that. Get this: While the mansion was going up, hundreds of buildings were being torn down in Barcelona to widen the boulevards. John seized upon the opportunity to bring the tiles from several of these buildings in a couple of shipping containers back to Florida to roof Ca’d’Zan. But who among us hasn’t done something similar? 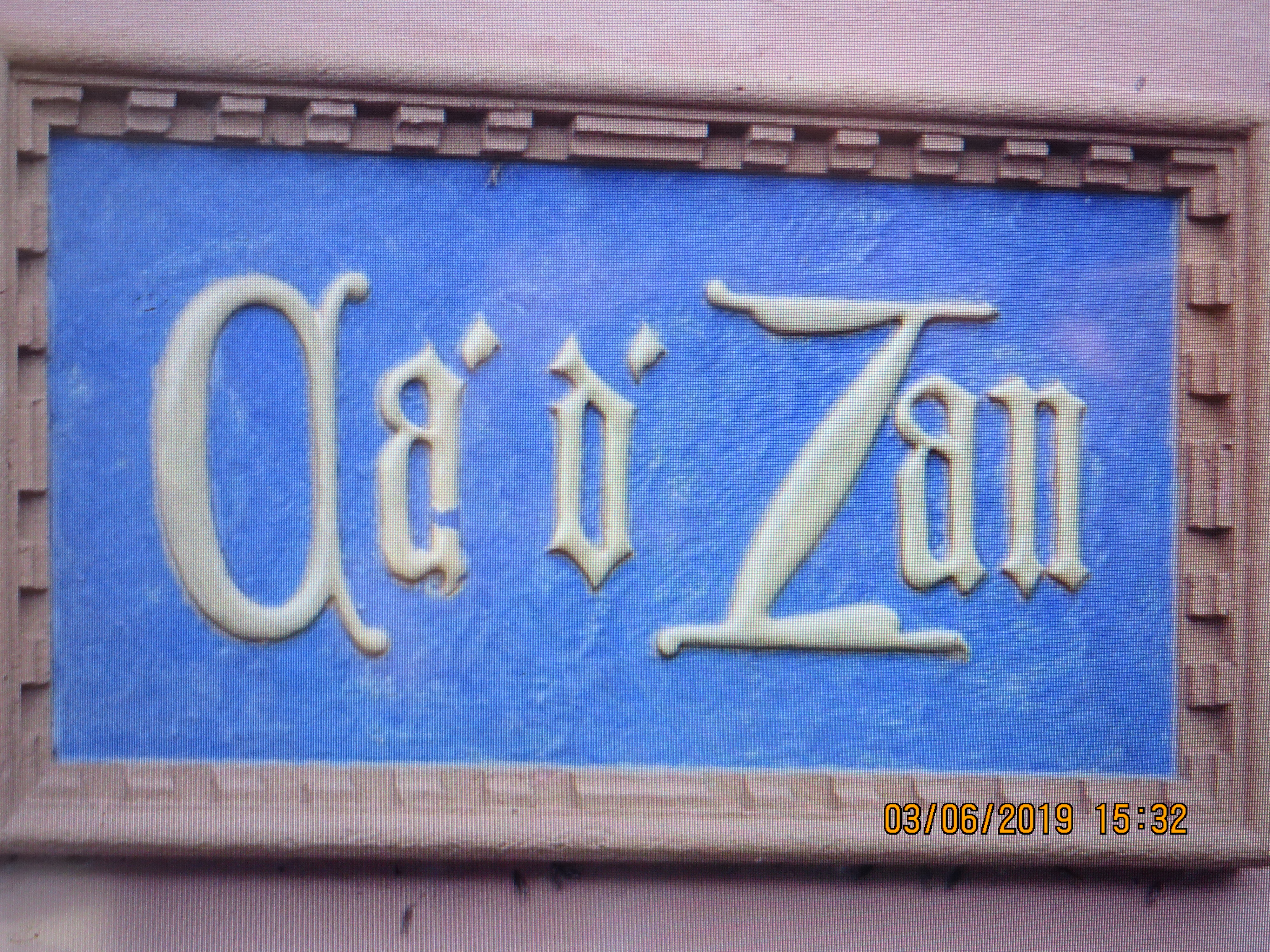 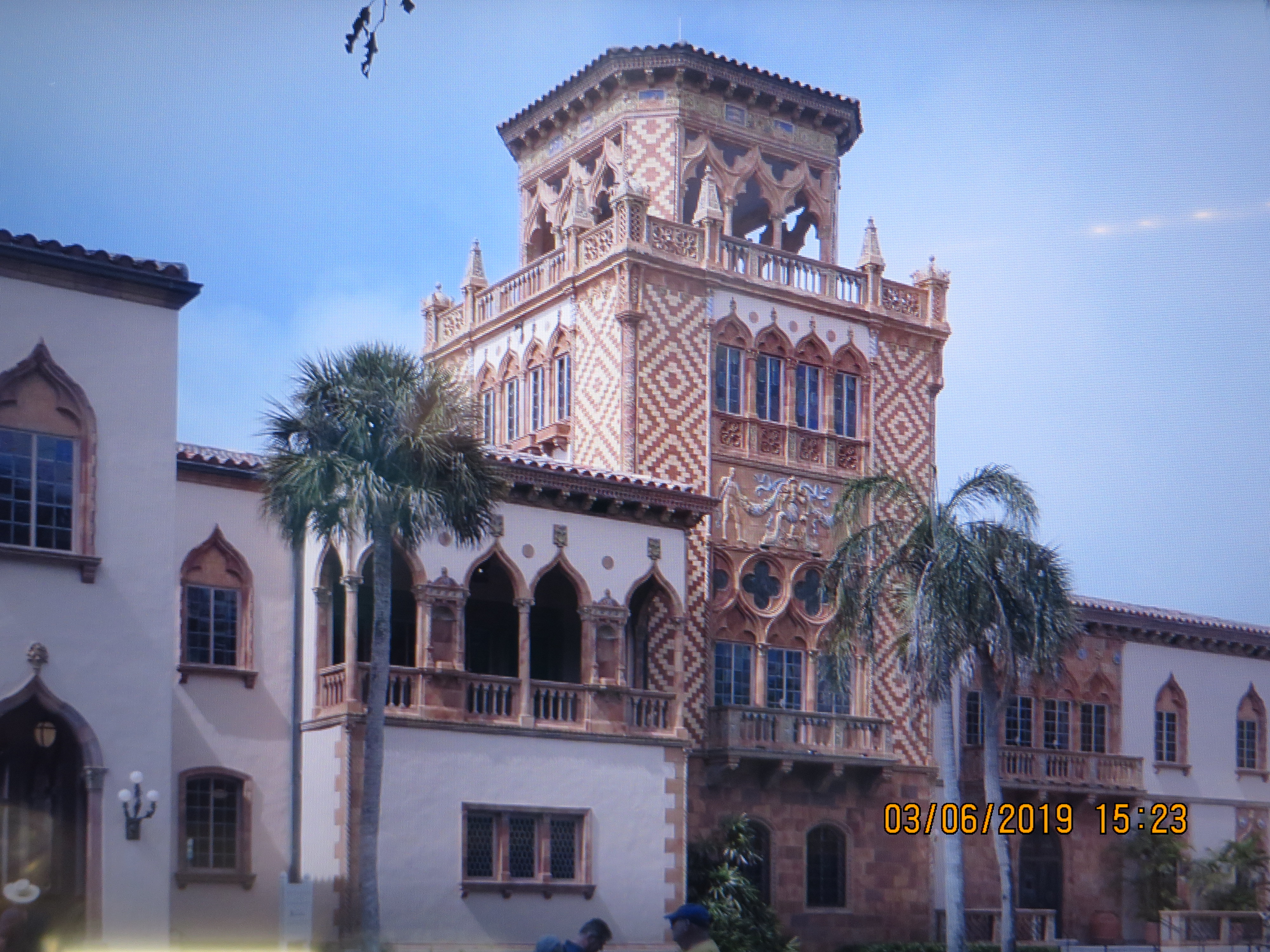 So, how about a little bit about our man, John. John was one of seven sons (and one daughter) born to a couple of immigrants from Germany. The family moved around Michigan a good bit looking for work. At some point, the five of the boys were captivated by a traveling singing troupe and set about to create their own traveling entertainment show. They each learned how to play a musical instrument and practiced until they were pretty good and then they began performing in nearby towns and villages. One thing leads to another, and the next thing you know, we’ve got ourselves a circus! No, seriously, they really did put together a road show. And they were doing quite well on the circuit. Hate to be a buzz kill, but let’s all curb our enthusiasm by remembering that there really was not alot of options for entertainment back then. Not much going on. A few guys with some musical instruments and a dog that can do tricks? OK, I’m free that night.

Well, it turns out that P.T. Barnum passed away in 1891 and James Bailey died in 1906, and before you know it, that whole dog-and-pony show was up for sale. That’s when the Ringling Brothers bought Barnum and Bailey. This is probably a perfect time to say “the rest is history” because that’s when the name changed to the Ringling Brothers Barnum & Bailey Circus, the name we all grew up associating with the circus. Each brother brought different talents and interests to the circus and each had a role to play. John was particularly adept at being the “front man.” He was all about scheduling and all that logistical stuff. He and Mable had their own rail car, The Wisconsin, in which they traveled with the mighty Ringling Brothers Barnum and Bailey Circus as it crisscrossed the country. They also used that Pullman car for vacations and for business. The Wisconsin is on display at the circus museum and it is a beauty. It was as luxurious and as opulent as money could buy just after the turn of the century. But John was not just a circus promoter. John was a legendary entrepreneur. He had his fingers in about thirty different pies ranging from ranching to oil rigs. But what was most significant to Sarasota was his real estate projects. John managed to buy up not only Longboat Key, but also most of the other keys. He actually built the bridge over to Longboat Key, then signed it over to the city of Sarasota. Nice. John and Mable loved Sarasota and Sarasota loved them. 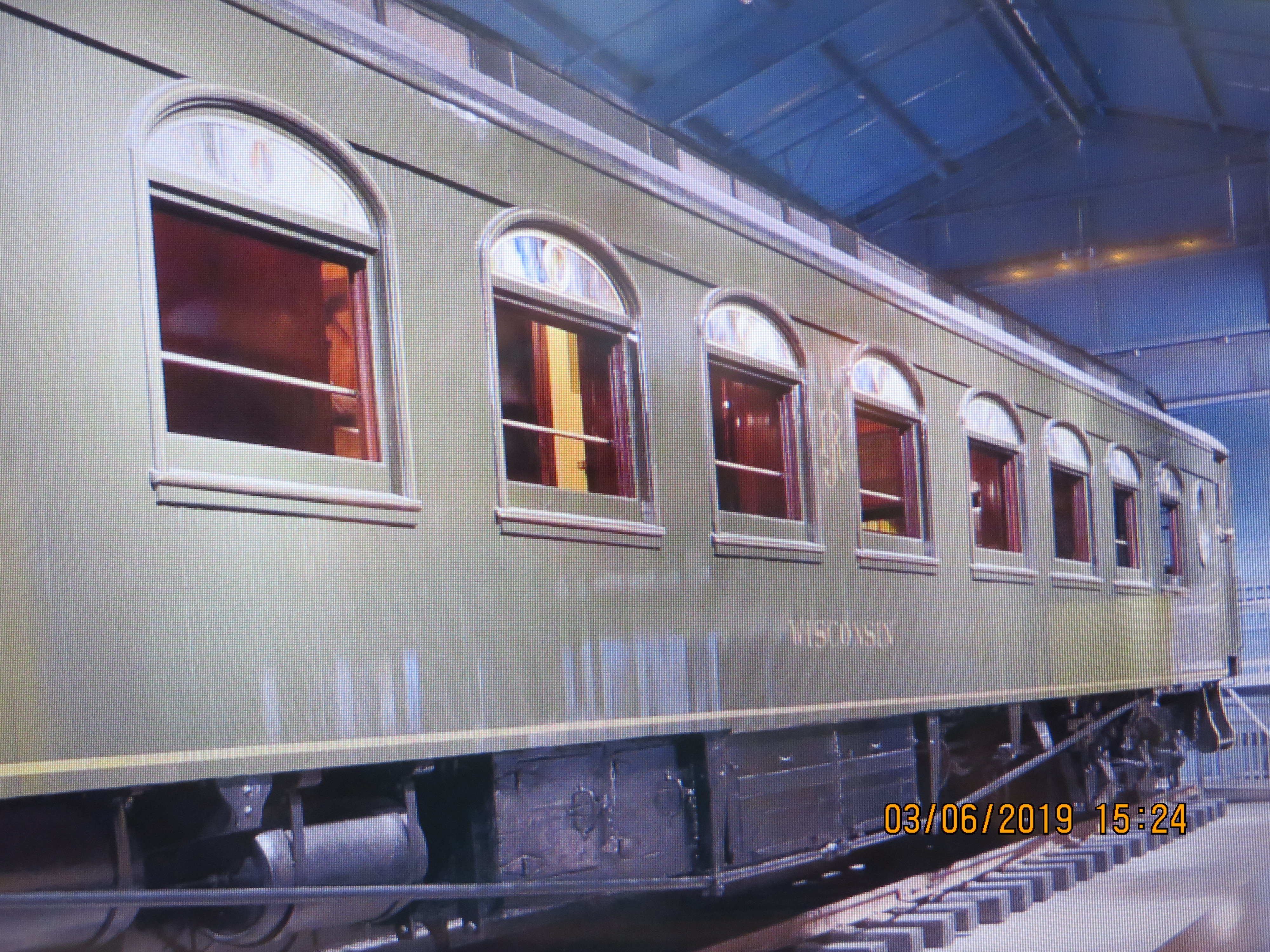 The John and Mable’s rail car, The Wisconsin, named after his home state.

Mable loved to entertain at Ca’d’Zan. Her gondola was often spotted full of happy guests as it bobbed about in the bay. Sadly, she only had three years in the Sarasota sun before she passed away at the age of fifty-four. John never recovered from the loss of his dear Mable, although he did remarry. Bad idea: it ended poorly in a short amount of time. Then, John passed way at the age of seventy in 1936. John and Mable, as well as his sister, Ida North, are buried in the Secret Garden on the grounds of the estate. (Pro tip: It’s not really a secret – shoot, I can show you where they are buried.) As it turned out, John only had $311 in the bank when he died, but he was asset-rich beyond belief. Since creditors were nipping at his heels, his death may have been what made possible his last request: John wanted more than anything to keep the art collection intact although he had been advised by his legal counsel to sell off some of the art. John refused, saying that Mable would want the collection to remain whole. He bequeathed their art collection to the state of Florida.

The estate was in probate for ten years. Creditors were lined up and ready to take whatever low hanging fruit they could get. During that time, the mansion sat empty and falling into a terrible state of disrepair. Although John had established a trust for the preservation of the mansion, it didn’t come close to being enough to maintain, let alone restore the estate. Some work was undertaken from time to time through the years, but the property needed nothing less than a complete overhaul. In the late 1990s, the state of Florida transferred the property to Florida State University and somehow ponied up the funds needed to restore the estate to its former glory.

John modeled the museum after Florence’s Uffizi Gallery. It is actually the sixteenth largest art museum in the country and the Ringling Art Library is one of the largest art reference libraries in the southeast with about 90,000 volumes. Eight hundred of the books were from John’s collection. The man loved studying and collecting art.

The Ringling Circus Museum was established after John’s death and has a fabulous collection of old handbills, props, circus equipment and other circus-related items. Rick really liked the human cannon truck. The Wisconsin is in the museum and I liked peeking in the windows. Adjacent to circus museum is the Tibbals Learning Center. The Tibbals houses the “world’s largest miniature circus” and was built by Howard Tibbals. Mr. Tibbals fell in love with the circus as a boy and has spent his life creating this incredible miniature circus that includes 42,000 miniature circus pieces. The Tibbals Center also has an area where you can do things like walk a tightrope and squeeze into a clown car. We did neither, but the center is also a really fun place to learn about how a circus operated. From a logistical and organizational standpoint, running the circus was a masterpiece of unbelievably epic proportion. 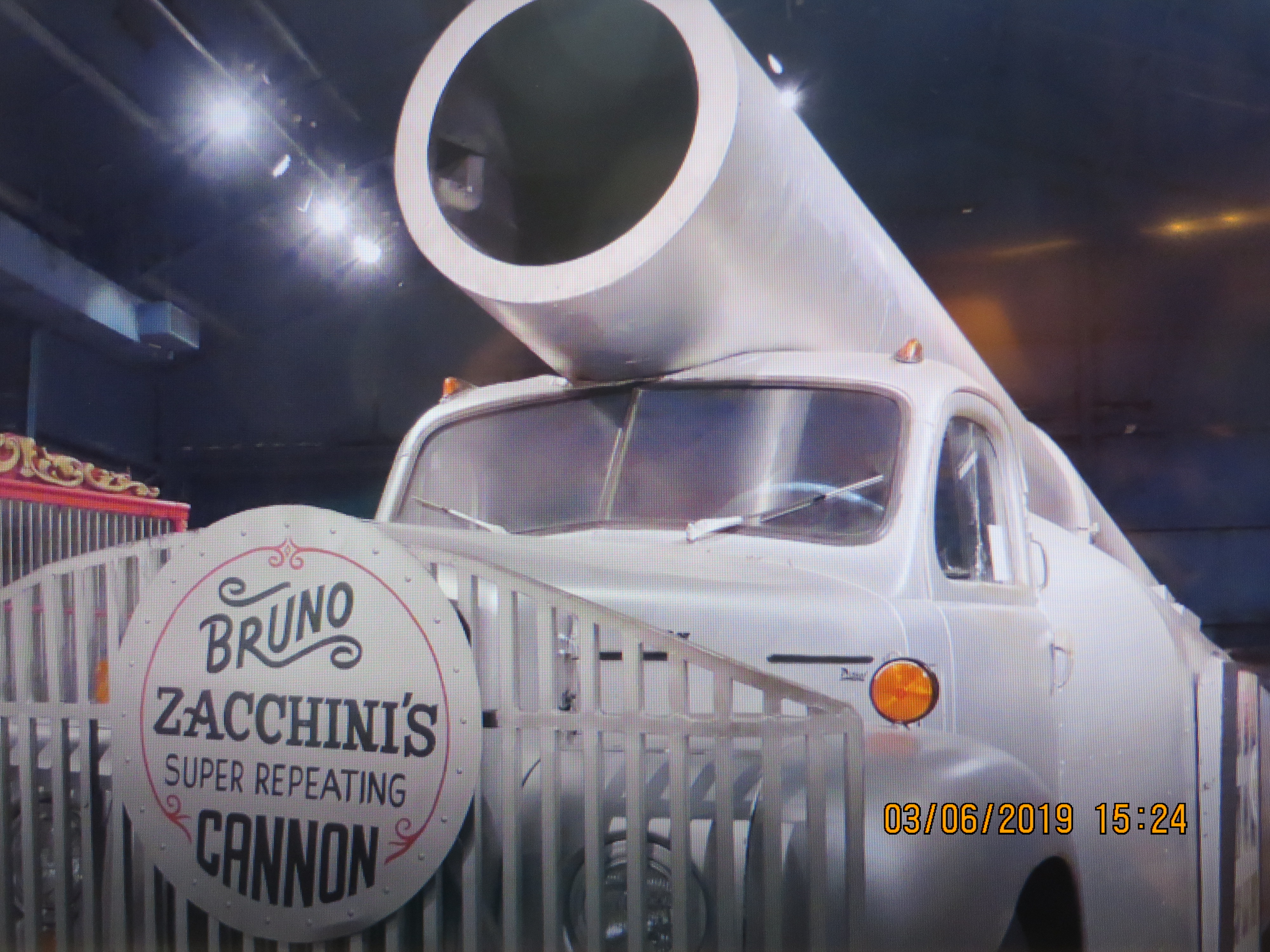 Personally, I think this is more impressive than the Wienermobile.

John and Mable Ringling “put Sarasota on the map.” It was just a sleepy little fishing town of about 840 people when they began spending winters there. It could probably be said that, in large measure, they were responsible for Sarasota becoming the arts and culture hot spot that it is today. If you think that circus people are just a bunch of roustabouts and carnies, think again. And if you ever get the urge to run away and join the circus, head to The Ringling. 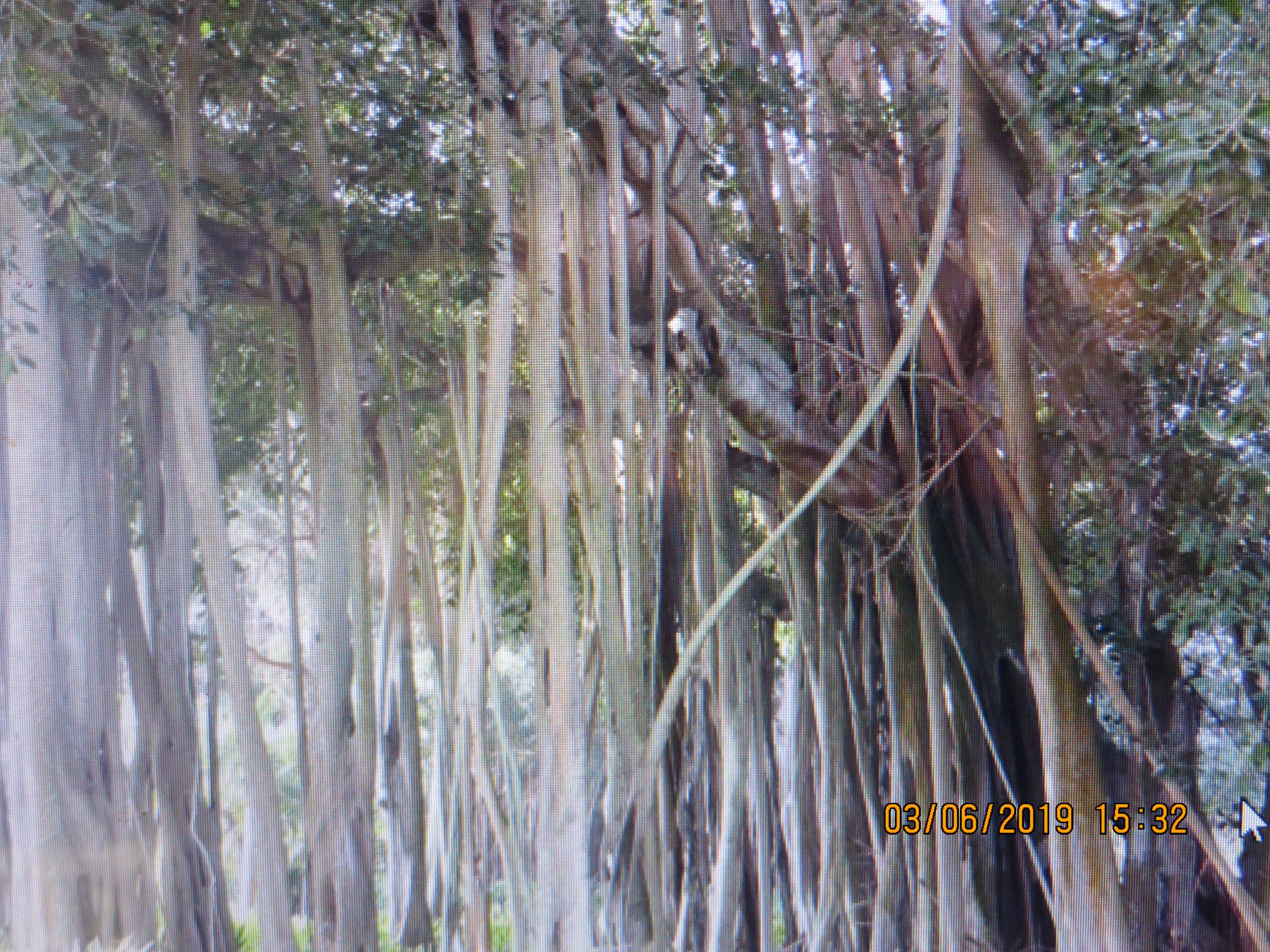 Just one of the many Banyan trees on The Ringling property.