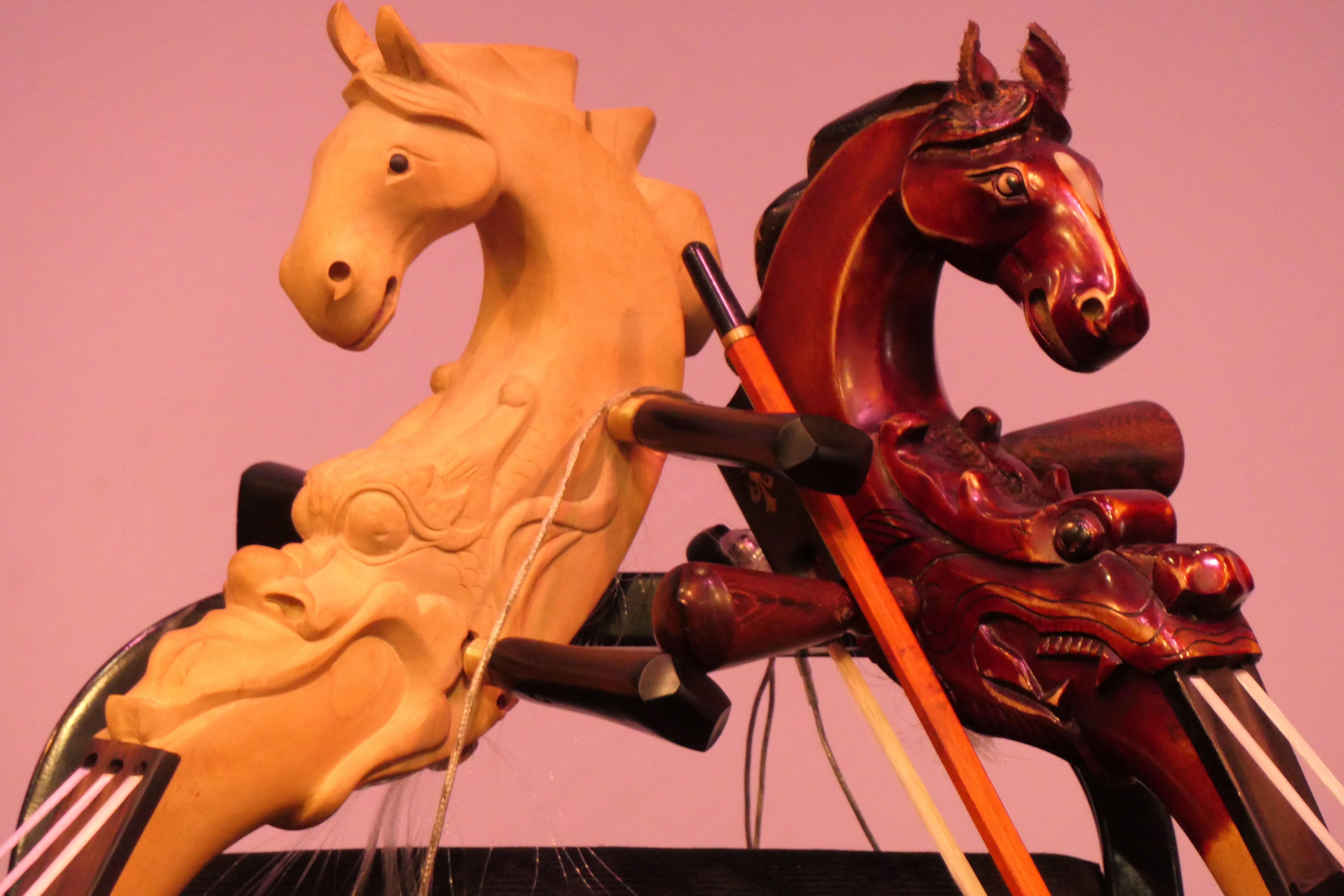 There are probably those who believe that I am a shill for the Savannah Music Festival (SMF). Nothing could be further from the truth. They don’t pay me a dime. I rattle on and on about it for free. This festival is billed as Georgia’s largest “musical arts event” and is in its 30th year. We are terribly sad that we missed the first twenty seven seasons. I guess, in a way, I think of SMF as Savannah’s answer to Charleston’s Spoleto. To be honest, I prefer SMF: more jazz, less opera. But that’s just me. This year, we chose three performances and in precisely twenty four hours, we sampled just a small taste of the various musical genres that the festival showcases.

To get things off to a rocking start, we cannonballed right into the deep end of the musical diversity pool with our first stop at SMF. We were intrigued by what we read about the Mongolian musical group calling themselves AnDa Union and they did not disappoint us. Genghis Khan would be so proud of how they have woven together the various musical traditions of all the Mongol tribes he unified. The members of AnDa Union consider themselves musical gatherers. It’s the young Mongolians like the nine members of AnDa Union who realize that their shared history is being forgotten and that they can help keep their culture alive through music. Sadly, many young Mongols have even forgotten how to speak their own native language. AnDa Union is trying to revive and unify the culture of Mongolia. This is no small feat since their culture is nomadic and their history is oral, so they basically sing their history through a vocal style called khoomii, or throat singing. (I can’t help you with that pronunciation.) Their instruments are as unique as their singing style. The performance was nothing short of amazing. Sometimes their songs were reminiscent of bluegrass. Sometimes they sounded distinctly Asian. Other tunes reminded me of that “new age” sound you hear in spas when you are getting a facial or massage. But the craziest thing was how sometimes it sounded like the stage was covered with bullfrogs, and then later I’d swear I heard horses. I must admit that I worried a bit about their vocal cords. I mean, would an ENT doc approve of the vocal gymnastics they do?? Well, all I can say is that the performance was what we have come to expect and love about SMF: music that is totally unique and immensely enjoyable. 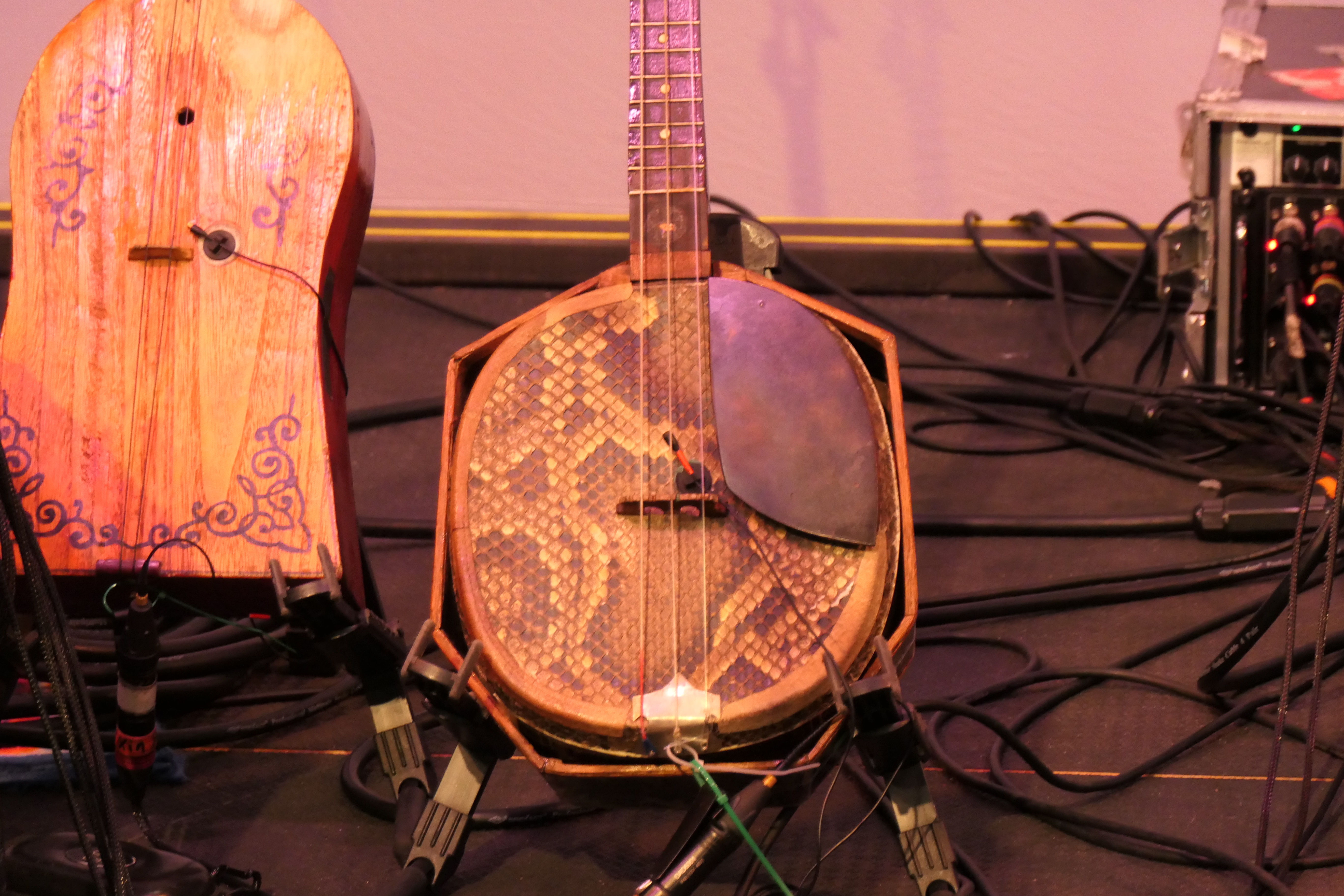 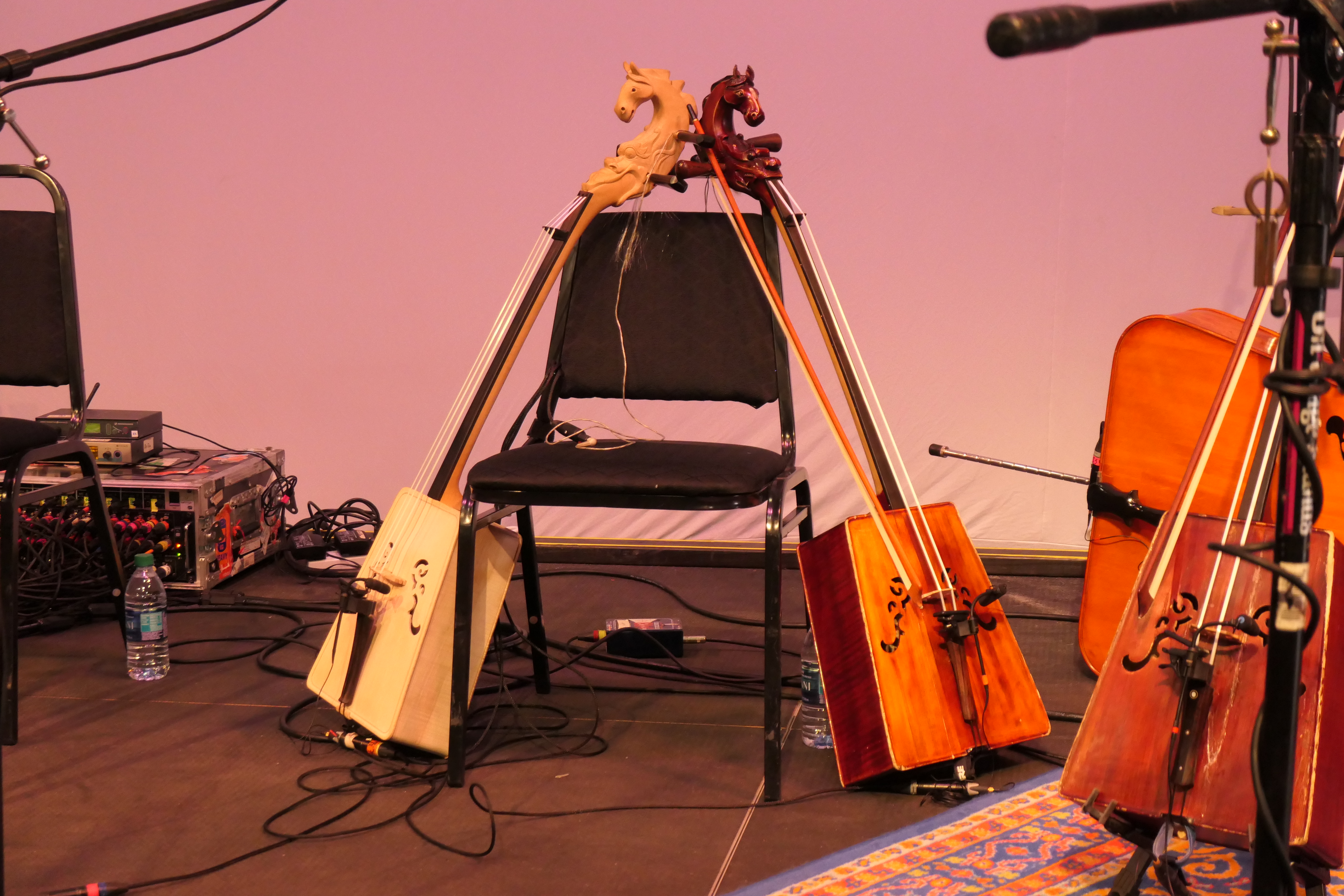 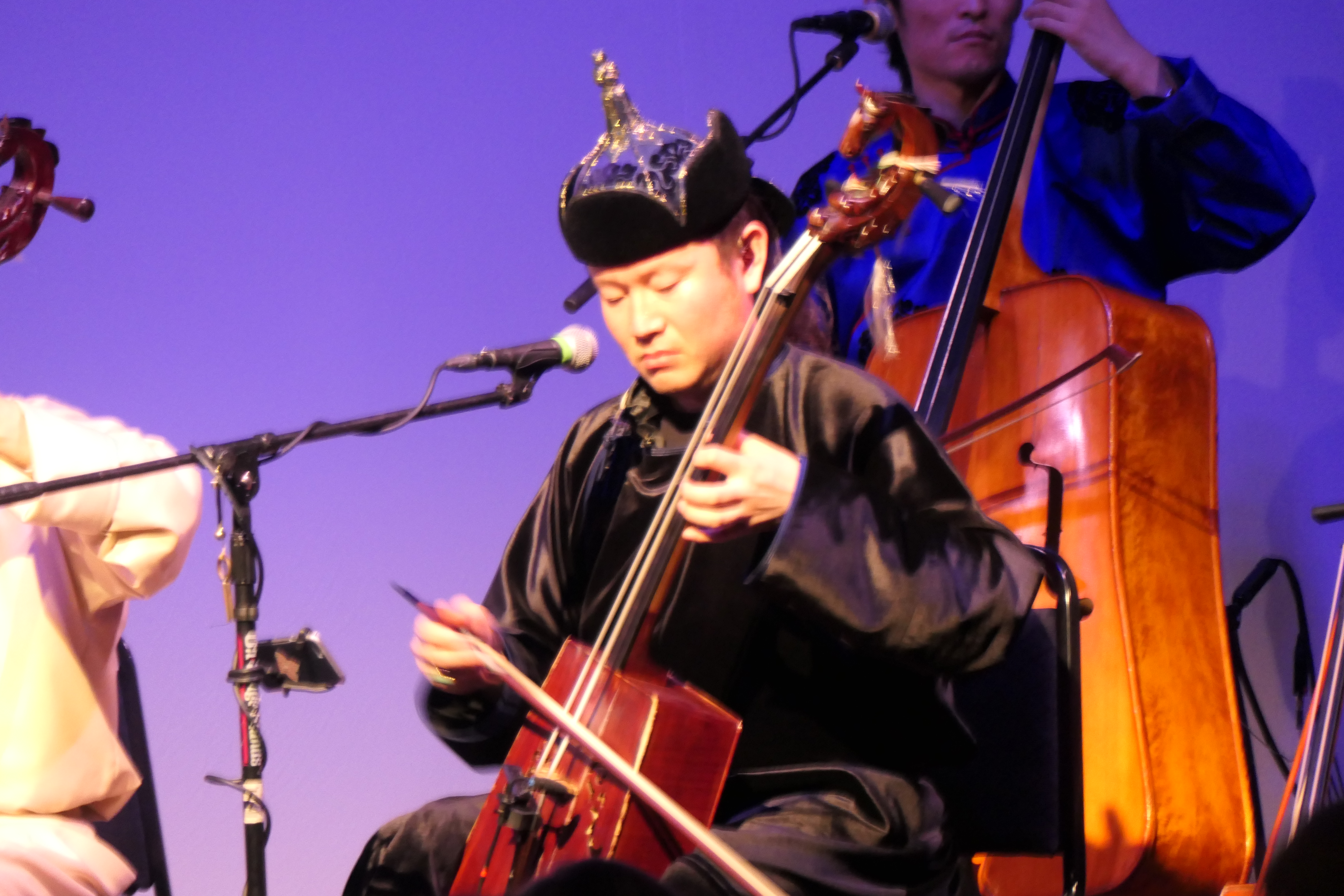 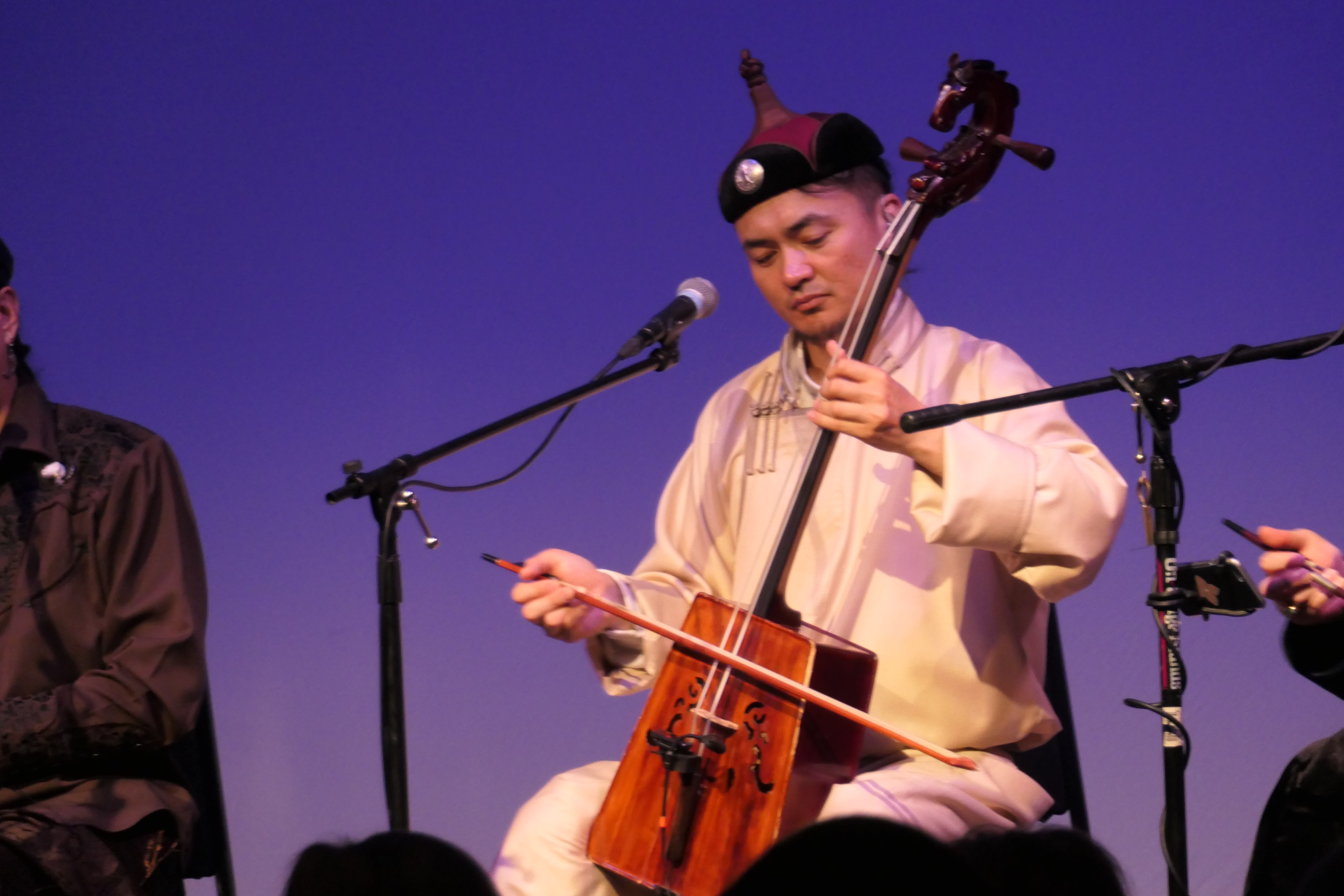 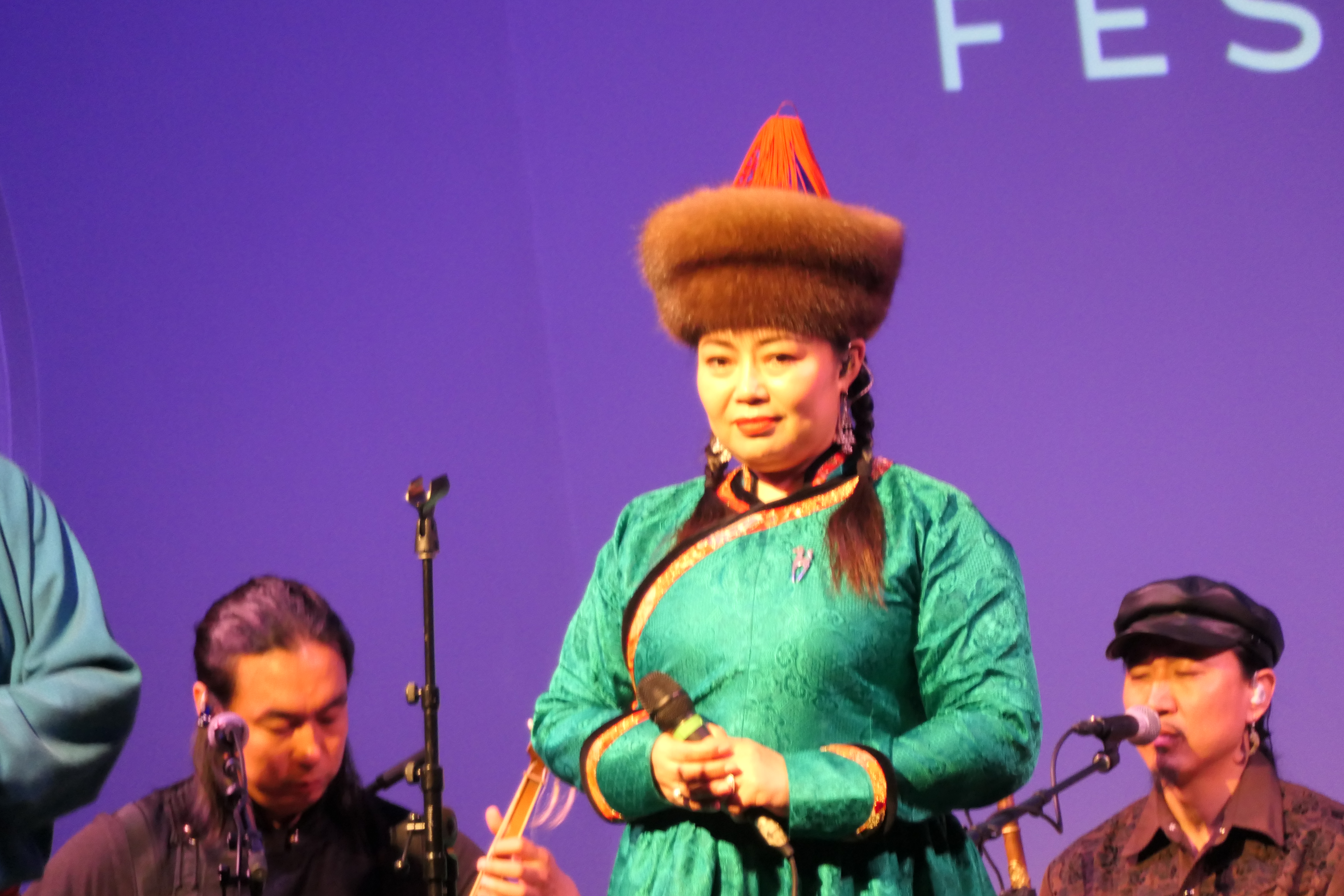 Last evening, we really changed channels. We attended a performance entitled Kannapolis: A Moving Portrait. The musical genius behind the show is Jenny Scheinman. Jenny wrote the score to accompany old black-and-white video footage filmed in Kannapolis, North Carolina in the late 1930s and early 1940s. It seems that a North Carolina portrait photographer, H. Lee Waters, was down and out because of the Great Depression. As the daughter of a photographer, I can believe that. When I was a child, I heard my mom say many times that, when times get tough financially, hiring a photographer for your event is the first thing to scrap, though I’ve also heard people who own golf courses say the same thing about their business. Anyway, Mr. Waters bought a movie camera and began filming silent snips and bits of life across the Carolinas. The folks he filmed were not in the least bit camera shy; they really seemed  to enjoy being subjects of his work. They seemed totally unaffected by the camera. No one hid their smile, and believe me, there were lots of imperfect teeth. No one seemed concerned that their clothes or shoes were very shabby. Nobody ran for a make-up mirror. He filmed times of joy and times of sadness; he filmed people working hard and people playing hard, too. Then he screened his footage at local theaters which really drew in the folks on the film. He called his films “Movies of Local People.”

So now fast forward to 2015. That’s when this seventy year old footage was reincarnated as the backdrop of Scheinman’s original musical score commissioned by Duke University. Scheinman and a film director named Finn Taylor performed cutting room magic with the film and Jenny’s music. The two of them did a masterful job of melding the old film with the music so that it sometimes seems like the people on the screen are moving to the music as Scheinman plays. Robbie Fulks and Robbie Gjersoe, really fine musicians in their own right, accompany her on bango and guitar and also lend their singing voices as needed. As it turns out, the nickname for Kannapolis is “City of Looms,” which is a perfect metaphor for the weaving of the motion pictures and the music. This performance was stellar. Seriously stellar. Maybe that was because we are a couple of nostalgic old southerners, but it seemed that the entire audience was as captivated by the presentation as we were. I do believe that I could have sat spellbound all evening. 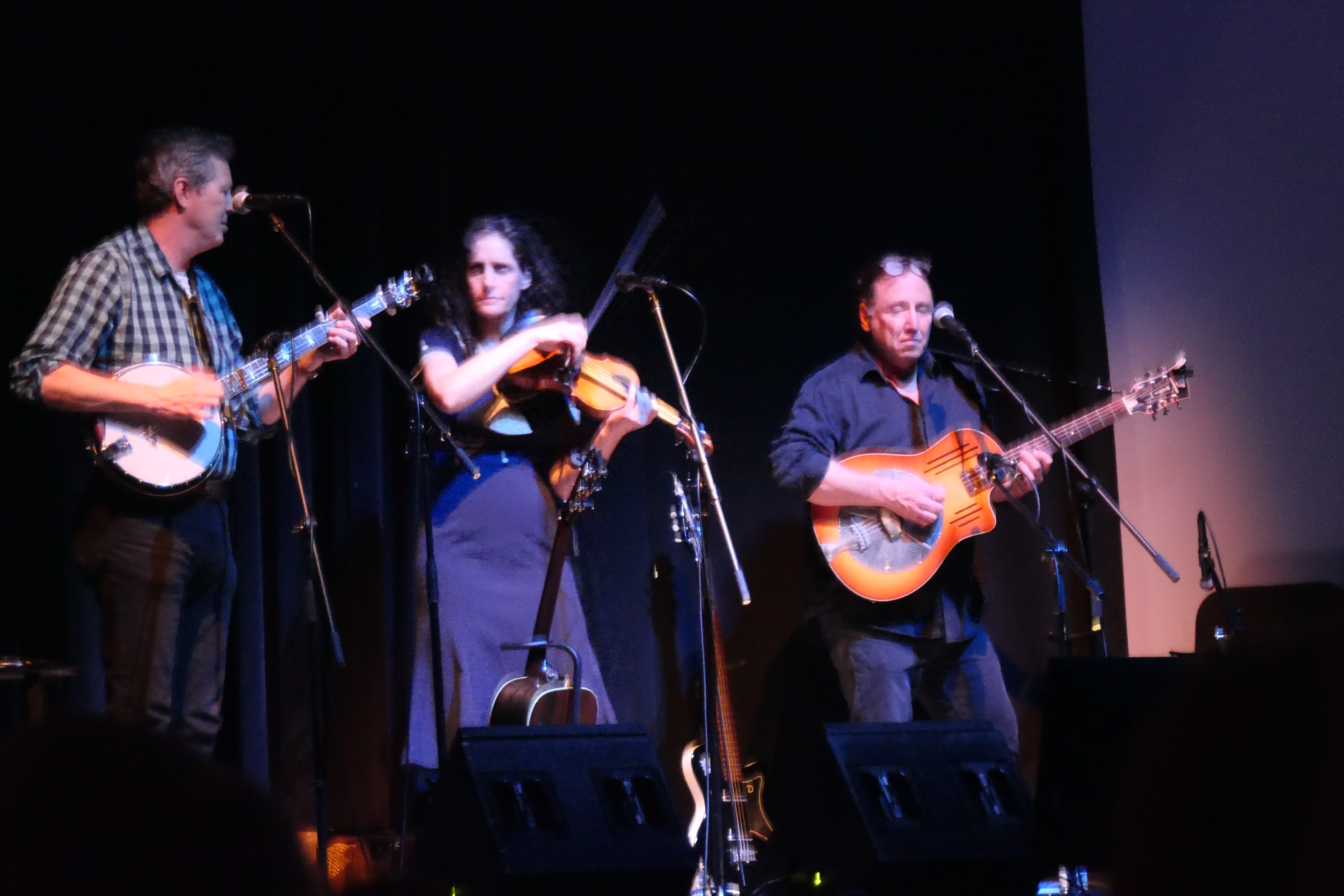 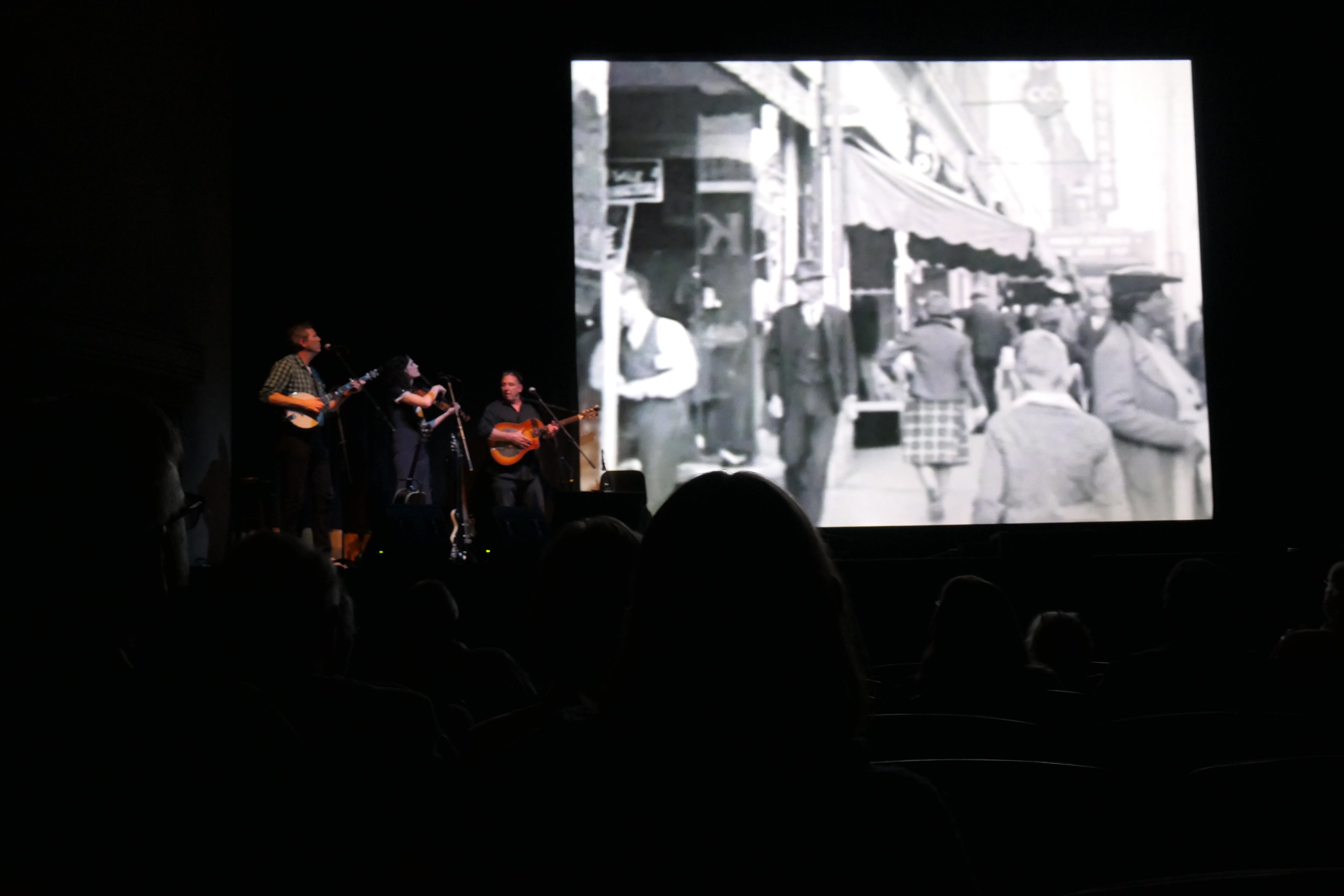 The last performance we attended was by a ten-piece, all-female brass ensemble calling themselves tenThing. The group was started in 2007 by Tine Thing Helseth, a Norwegian trumpeter. Let’s practice pronouncing her name. Say it like this: “Tee-na Ting HEL-set.” When she was only nineteen, she was hanging out with a few other trumpet-playing girlfriends watching a string orchestra perform. They started wondering if they could play on that level with brass only. They decided to give it a shot and thought, just for fun, let’s go all-female while we are going all-brass, so they rounded up six more Norwegian women brass players.

Let me tell you, when these ten women take the stage, the whole audience gets eager with anticipation. The energy is palpable and the crowd is immediately drawn into the music. Love the sound of brass? You know, the lively marches and show tunes. Think again. Think Mozart, Grieg, Vivaldi, Bartok. These ladies have collaborated with a genius arranger who has taken classics no one associates with brass and transformed these pieces with adaptations that make you think the piece was actually written for brass. They began the concert with every Norwegian’s favorite composer, Edvard Grieg. We really enjoyed their compact version of Bizet’s opera, Carmen, but our hands-down favorite was their adaptation of Vivaldi’s Four Seasons—Summer. Their performance could convince anyone that it was originally written for brass and not strings. It was just plain fun to see and hear tenThing perform. 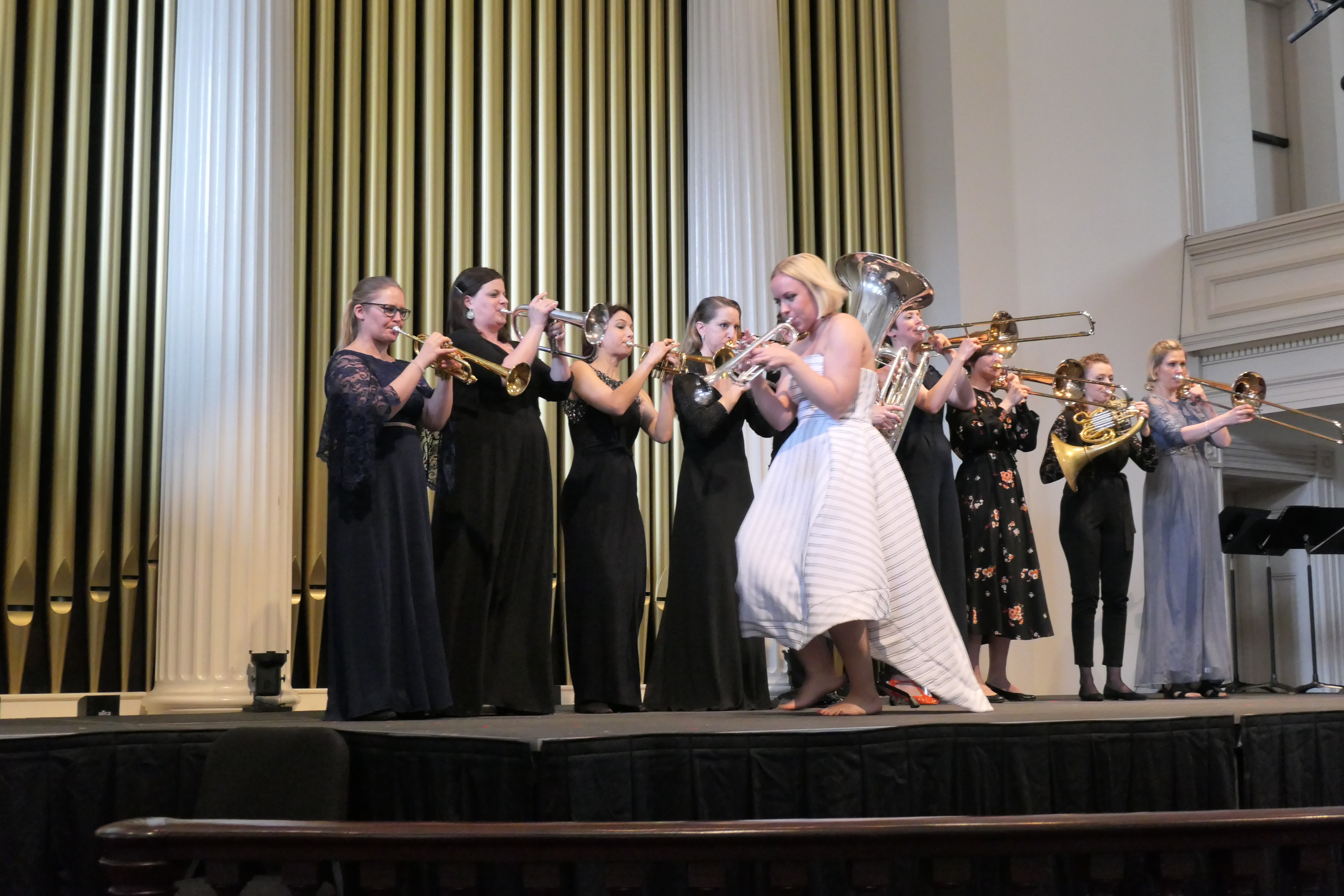 Anyone have any idea why Tine plays without shoes? 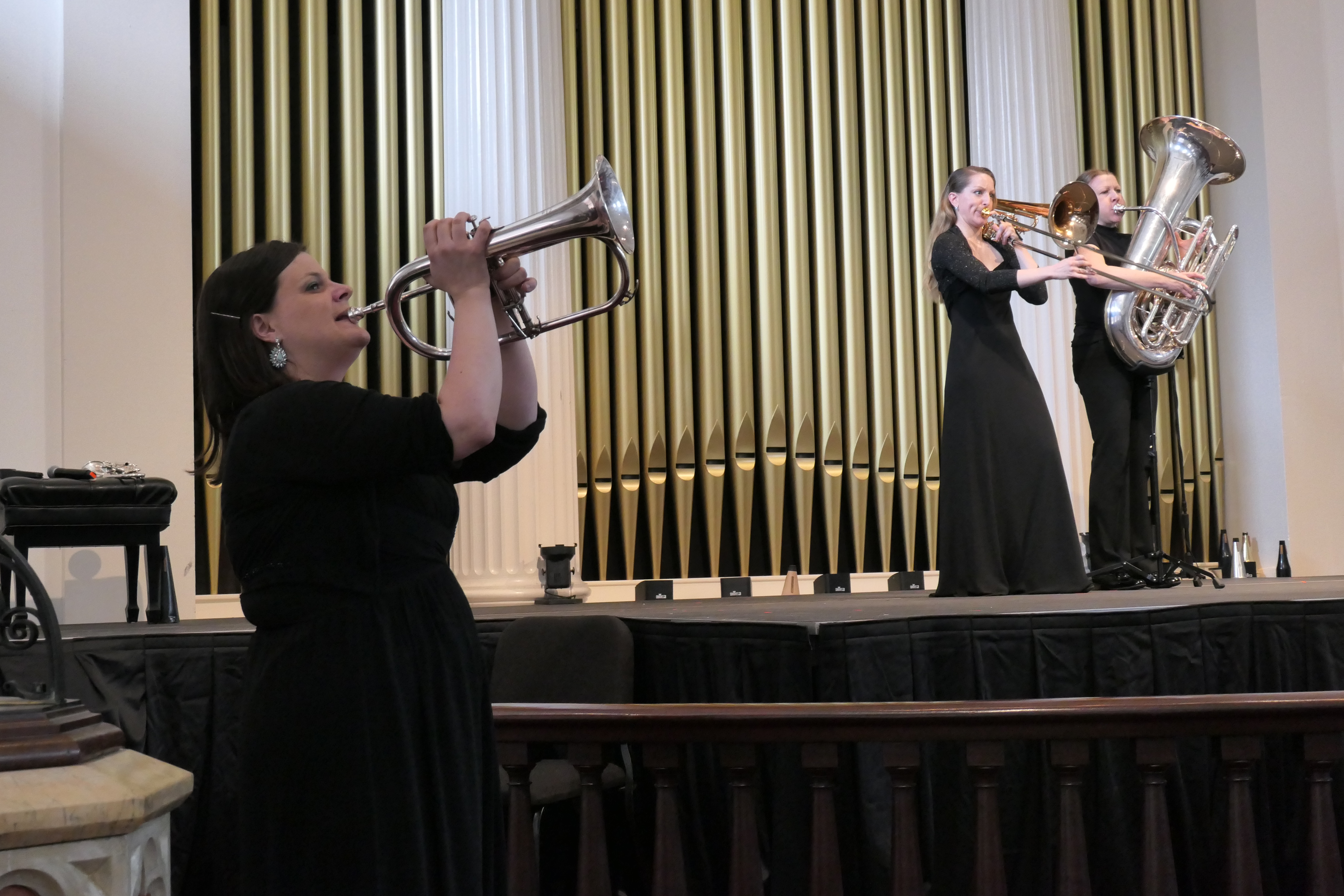 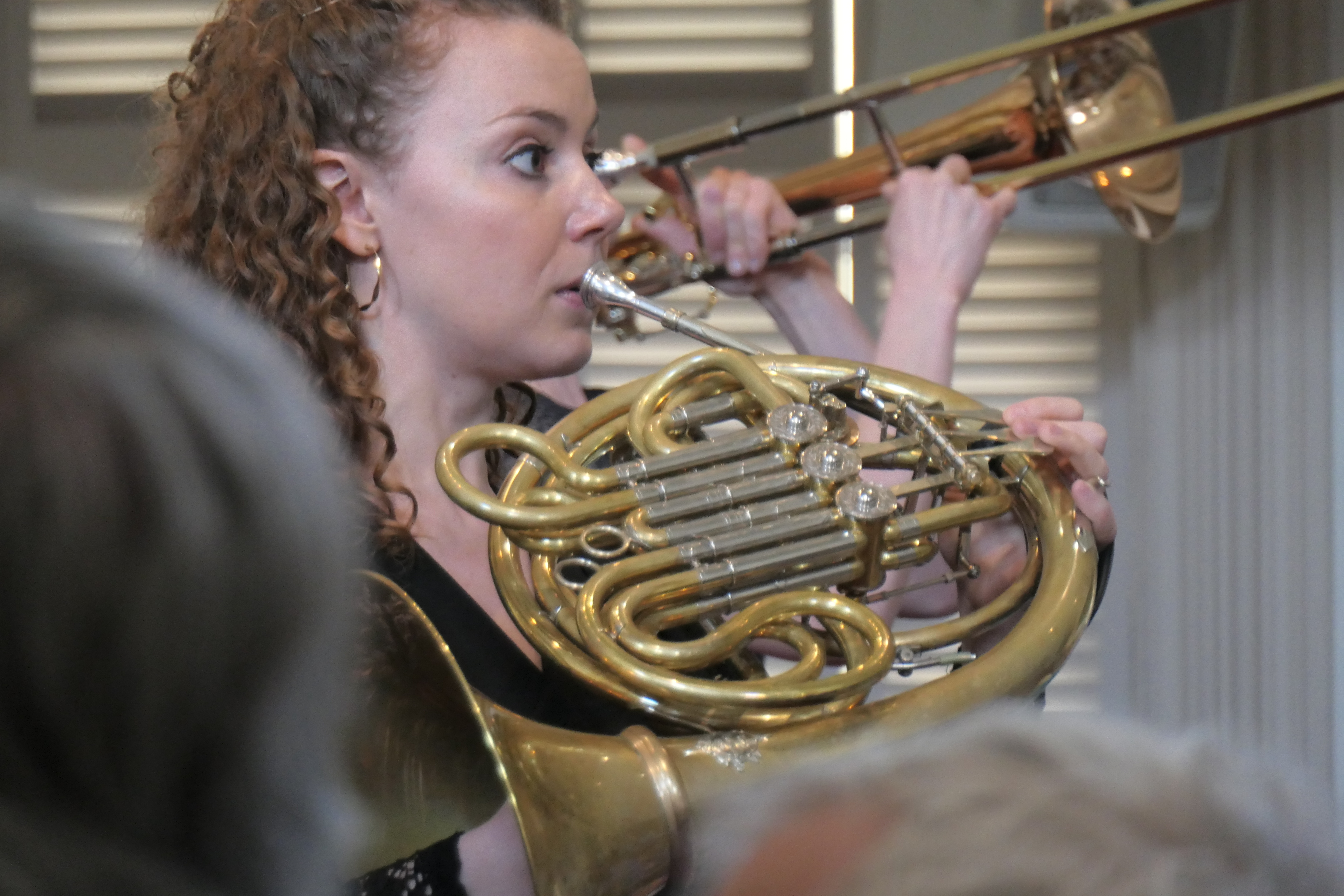 Our musical adventure was short but very sweet. We’d love to have stayed longer, but our life beckoned us back to the other side of the Savannah River. We were just glad we had that short interlude at SMF in the midst of the cacophony of life. It’s music therapy for us.