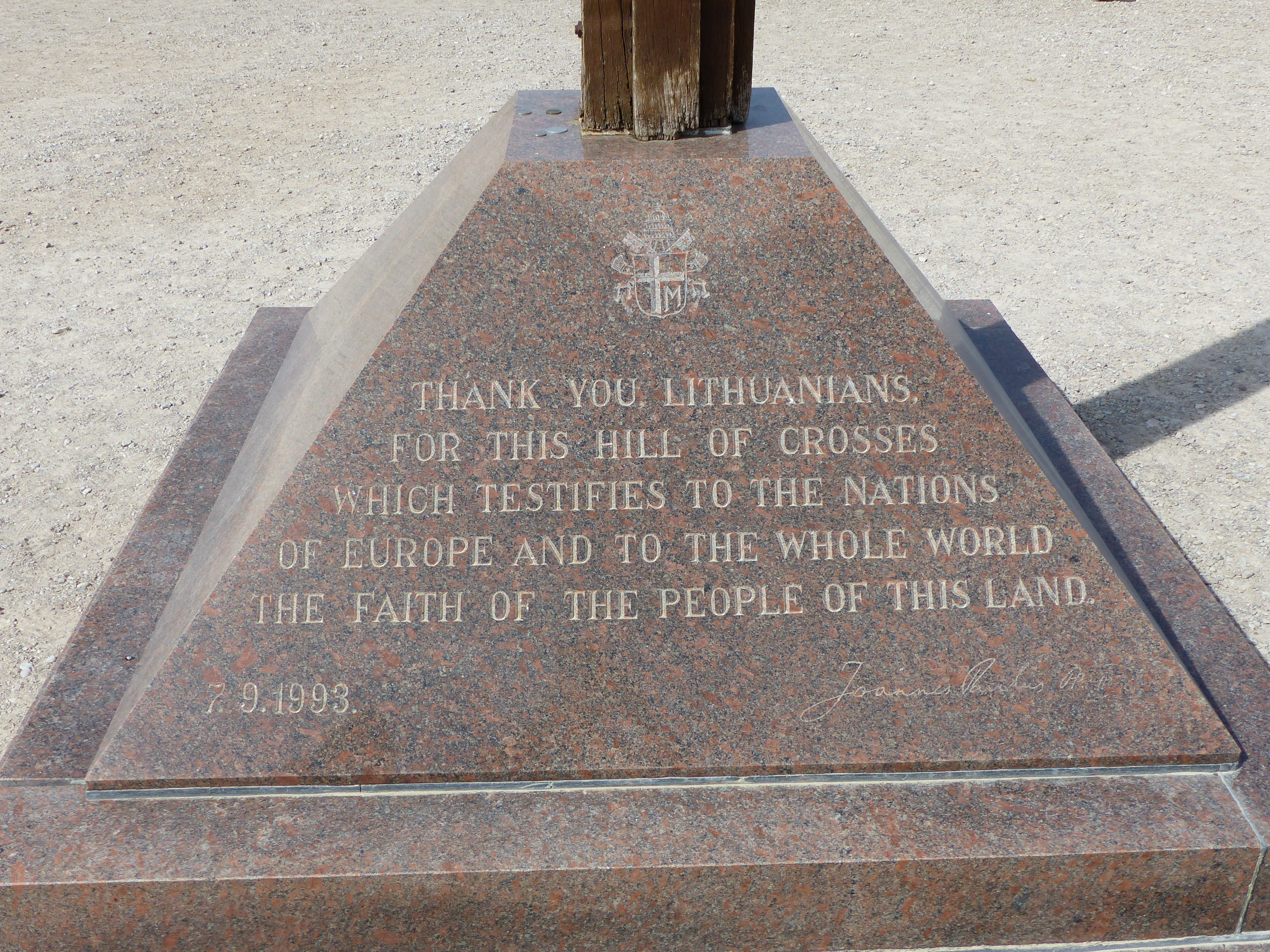 Thank you, Lithuanians, for this Hill of Crosses which testifies to the nations of Europe and to the whole world the faith of the people of this land. – Words of Pope John Paul II inscribed on a stone to commemorate his visit to the Hill of Crosses in September of 1993.

It seems that for many centuries, Lithuanians have traditionally been crafters of crosses and carvers of religious icons. Apparently, in the past, there were many tall crosses along the roadways of Lithuania. There are fewer now, but we did see several large, ornate crosses along the roadways between Vilnius and the border with Latvia. However, the Hill of Crosses is home to probably well over a quarter of a million crosses and other icons of Christianity and even some of non-Christian religions. Apparently, according to our guide, some students undertook the task of counting the crosses; they quickly became overwhelmed and abandoned the project. There are fifty crosses at that site that are regarded to be of major cultural significance, so it’s obvious that Lithuanians revere the art of cross-crafting. Apparently, so does UNESCO. It turns out that, in addition to recognizing sites of significance around the world, UNESCO keeps a list of “immaterial world heritage.” The Lithuanian art of cross-crafting in on that list.

No one is exactly sure when the people of Lithuania began leaving crosses on the little saddle-shaped hill about seven and a half miles outside of Siauliai, Lithuania, but it is generally believed that the custom began in the mid-19th century, if not a few decades earlier. (Don’t worry; you can pronounce the name of this city. Say “shall-lay.”) Some believe that it dates back to medieval times.  Over time, placing a cross on this hill came to be an act of peaceful resistance to the Soviet occupation or the peaceful endurance of Lithuanian Catholicism. It is widely believed that this is the origin of the custom.

There was a revolt against the Russian regime in 1831 and the people were not allowed to have a proper burial for their loved ones lost in the revolt because the Tsarist regime was attempting to obliterate religion and the shared culture of the people of Lithuania. Since they could not have funeral services to honor their fallen, they began erecting crosses on the hill. Even more crosses appeared after another rebellion in 1863.

By the beginning of the 20th century, the hill was well known and frequently visited. People made pilgrimages to the site. Religious services were held there. This really angered the Soviet government. For about twenty years, the Lithuanians endured what they called the “demolition” period. The hill was bulldozed at least four times. Wooden crosses were burned; china, stone, and concrete crosses were smashed; metal crosses were taken to the scrap heap. Police guarded the site. Then, for a period of time, the authorities used the excuse of an “epidemic” in the area to keep people out. At the end of the 1980s, the area was flooded with a stream that was know to be polluted with sewage. However, the Hill of Crosses was resurrected every night as people risked danger and personal harm to continue to show defiance of the regime and solidarity with their countrymen.

Many people leave crosses as gratitude to God for blessing them in some way. Others use the act to ask God to grant a request. There is a legend that a man placed a cross imploring God to save his daughter who was on her death bed. When he returned home, she was waiting at the door for him. Since then, people have been leaving crosses hoping to have their prayers answered.

The significance of the site was neatly summed up by Vilius Puronas, a local artist and historian. “For some people, the Hill of Crosses is a place of contemplation and prayer. For others, it symbolizes defiance and resistance in darker times. And for others still, it’s an extraordinary occurrence in the humdrum of the ordinary life. None of them are wrong,” he said. 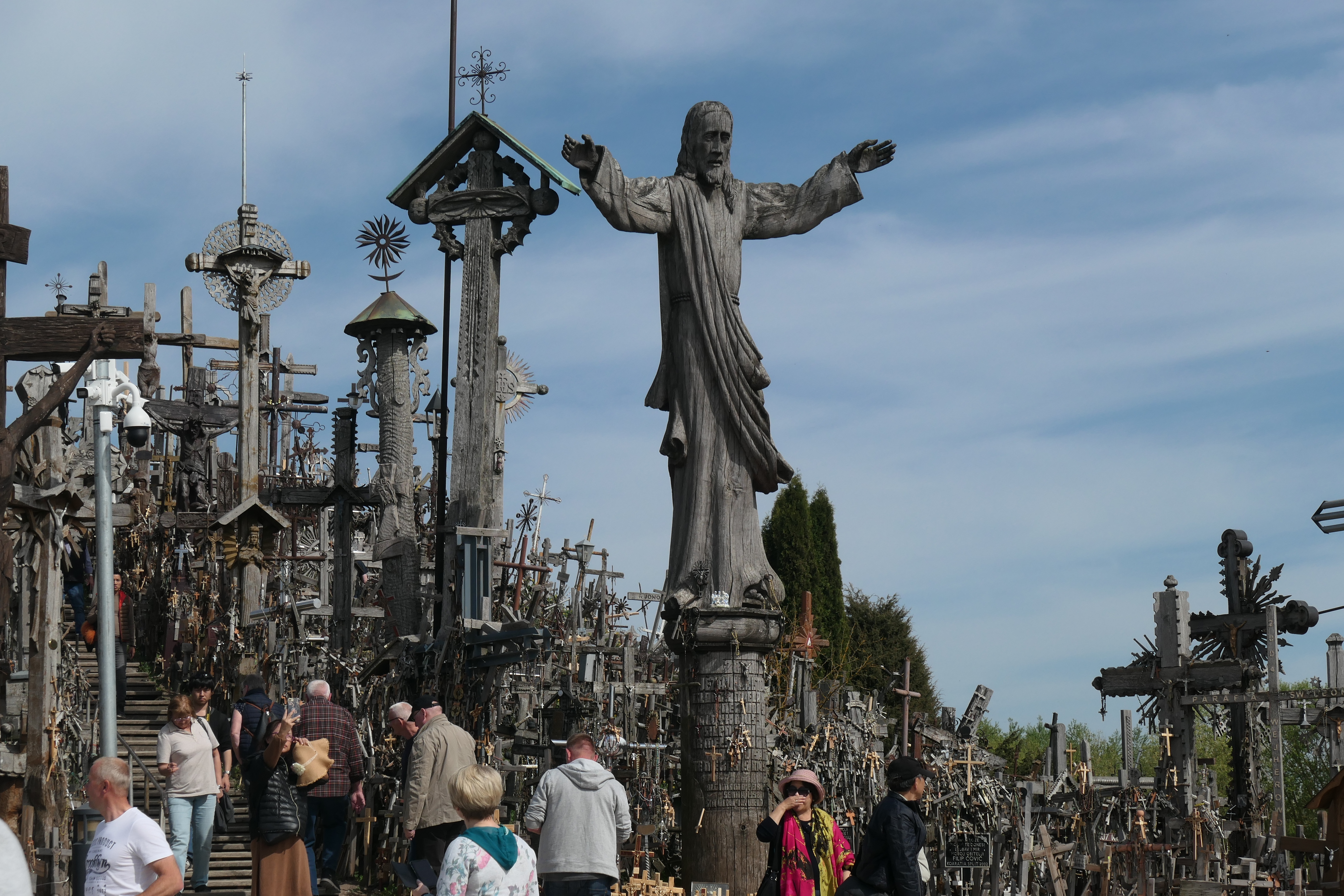 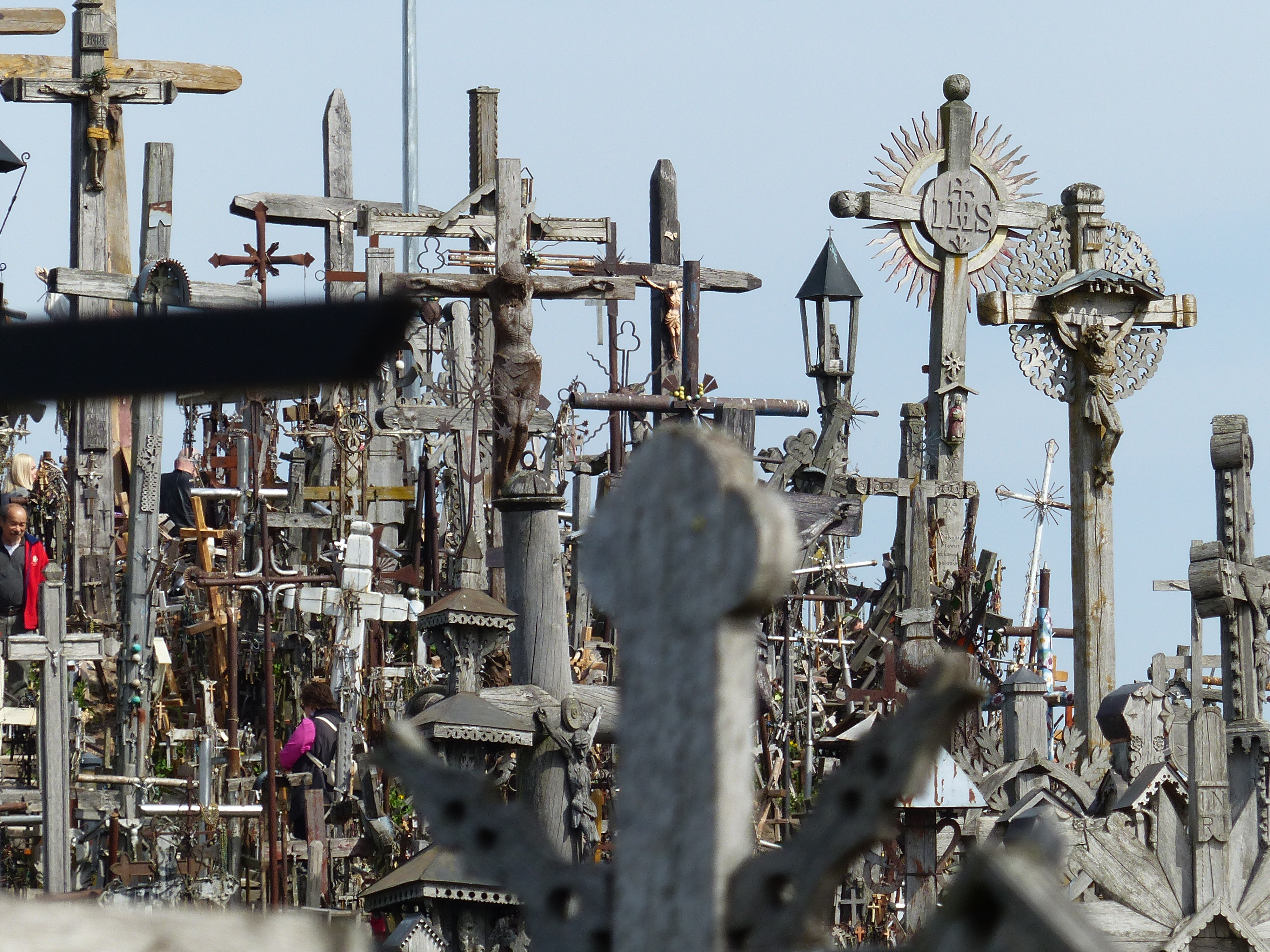 Whatever the origin, walking among the crosses here is a powerful experience. Is it the sheer number and size of crosses and religious icons? Is it the sound made by all the little crosses and rosaries tinkling in the breeze like wind chimes as they hang from big crosses? Is it witnessing the wonder and awe of those making the pilgrimage there? Probably all of the above. It’s also interesting to note that the hill doesn’t belong to anyone. It belongs to everyone. To the extent that it is “maintained,” it is maintained only minimally by the town and by the Franciscan monks who built a monastery next to the hill in 1987. Pity the fool who would try to desecrate the site these days.

We read about the Hill of Crosses while planning this trip and asked to have a stop included in our itinerary. We left a cross that Rick helped me make of wood from a live oak tree in our yard and decorated with a shell from the sea. I wanted our cross to represent our home and serve as our fervent prayer for two people who are very special to us. I asked that our dear friend who was unable to travel to France with us have her health restored. I also asked that my cousin’s husband feel stronger as he fights his own health battle. I have faith that my prayers will be answered. Standing among the crosses on this little hill, there is an overwhelming awareness I am not alone in believing that faith can truly move mountains. 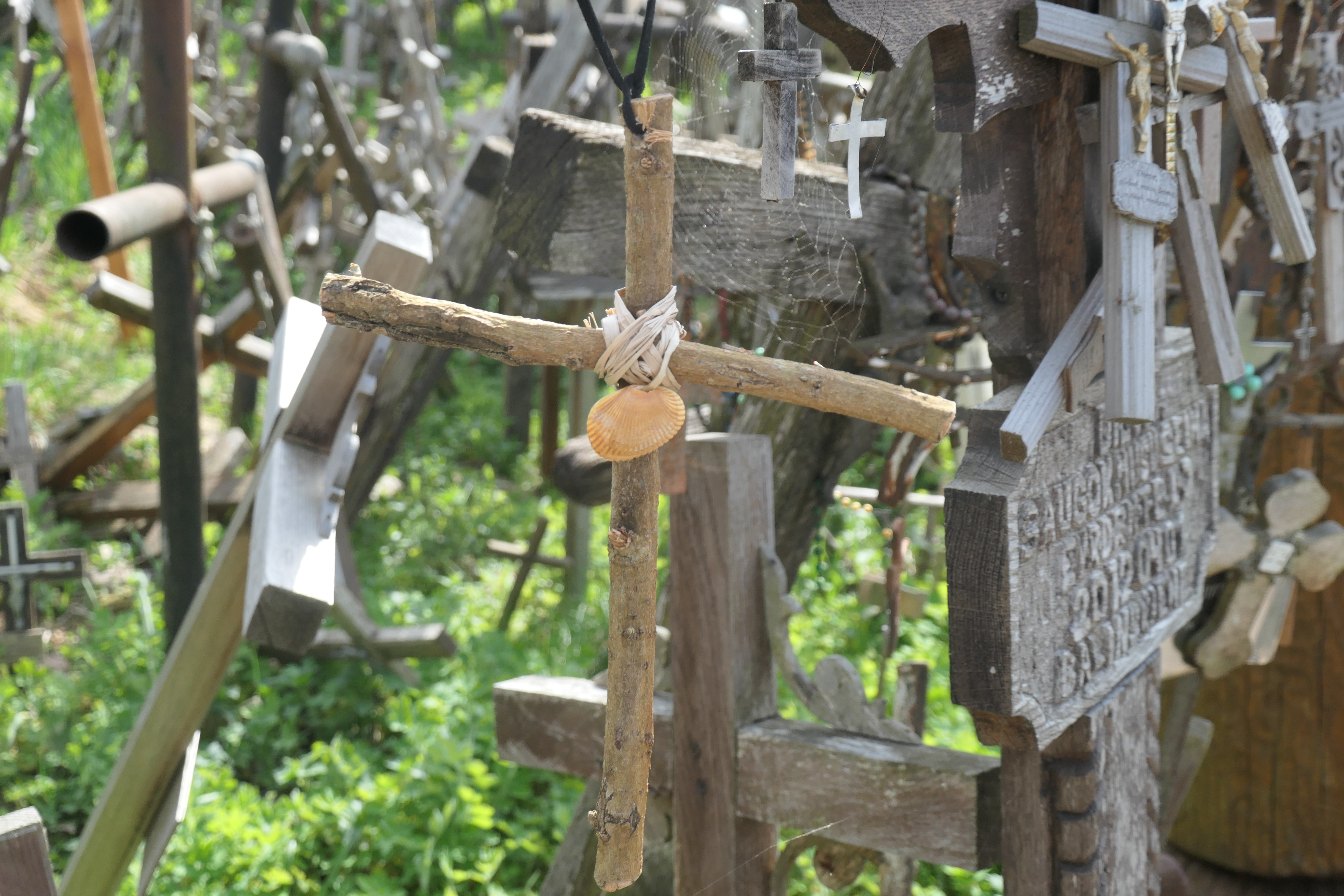