It is a well known fact around our house that I cannot sing. My babies cried louder when I tried to soothe them with a lullaby. They went on to laugh at my singing in church. Rick reflexively reaches for the volume knob to turn down the noise when I sing in the car. But I do love to make a noise that I call “singing.” That’s why I would love to participate in the Tallinn Song Festival. Estonians pride themselves in their singing, and all the great singers would drown out my joyful noise. I could howl to my heart’s content.

We first visited Tallinn, Estonia about a dozen years ago. I well remember hearing about the Singing Revolution and seeing the huge amphitheater at the Tallinn Song Festival Grounds where their song festivals are held. The festival grounds, Tallinna Lauluvaljak, will hold 100,000 people, so of course, they squeeze in thousands and thousands more. At some festivals, the crowd size has been estimated at 300,000. I believe the stage will hold upwards of 20,000 people or more. The Estonians began having these festivals, called Laulupidu, back in 1869. (Not a chance I can help with that pronunciation.) Their culture has always emphasized singing and the sharing of music. The tiny Baltic country, along with Latvia and Lithuania, has been used and abused since the dawn of history by some of their bigger and badder neighbors. For Estonians, music has historically been their salve. During the late 1980s and early 1990s, it became their weapon. 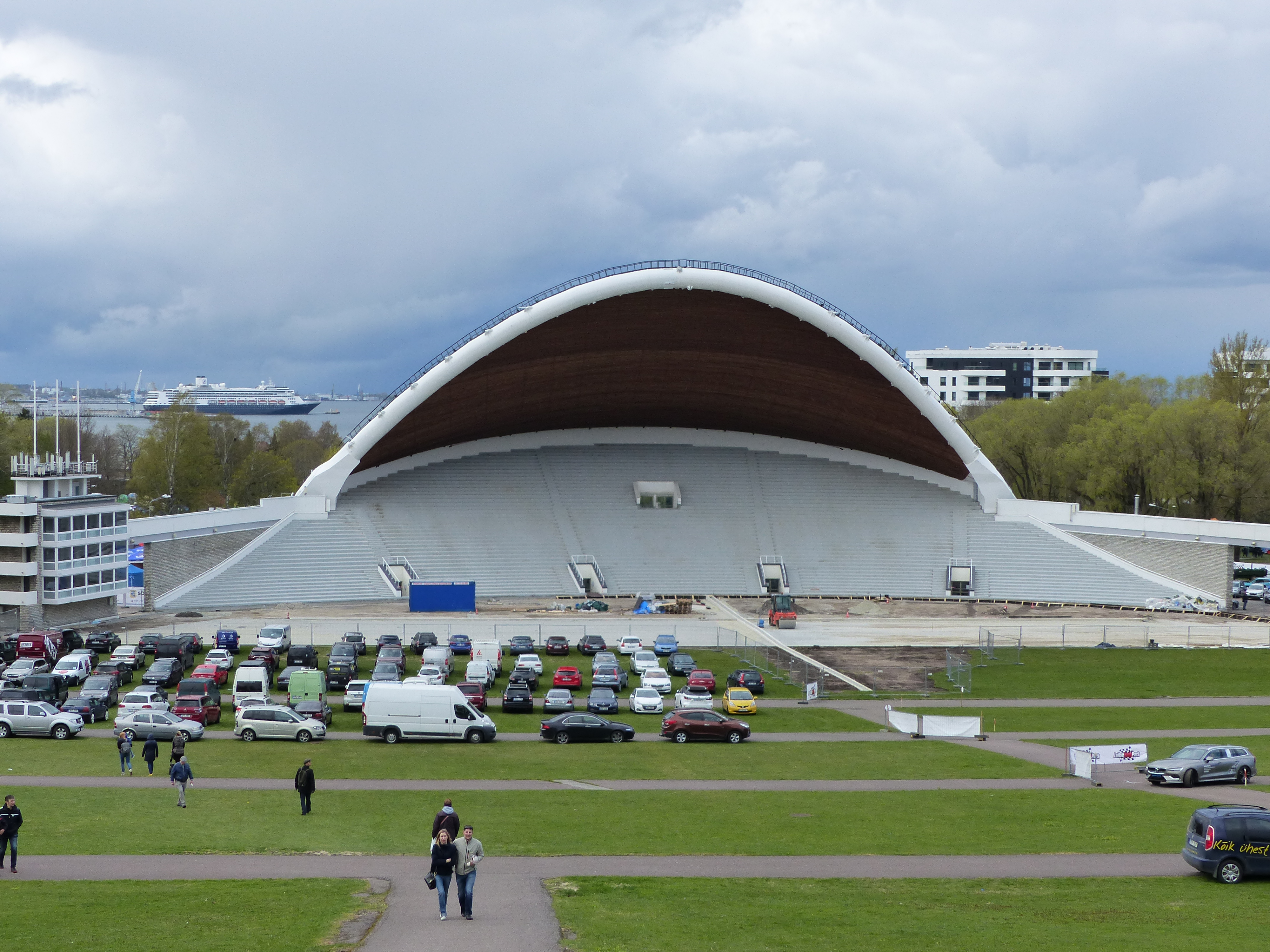 The Tallinn Song Festival amphitheater and grounds are under renovation, but work is scheduled to be completed in time for the festival in July.

This July, Tallinn will go berserk celebrating the one hundred fifty years of the Estonian Song Festival. On the one hundredth anniversary, they planted one hundred oak trees on the festival grounds. The tradition of the song celebration was only strengthened by its inextricable link with the freedom of Estonia from Soviet occupation.

The festival had its ups and downs through the years with interference from wars and Russia, but it was humming along pretty well until 1947 when the Soviet authorities forced the inclusion of foreign songs into the program. That struck a sour note with the Estonians. This was the first post-war song festival and Gustav Ernesaks was one of the artistic directors. Ernesaks went on to earn the title of “Father of Song” and a wonderful sculpture of him graces the grounds today. 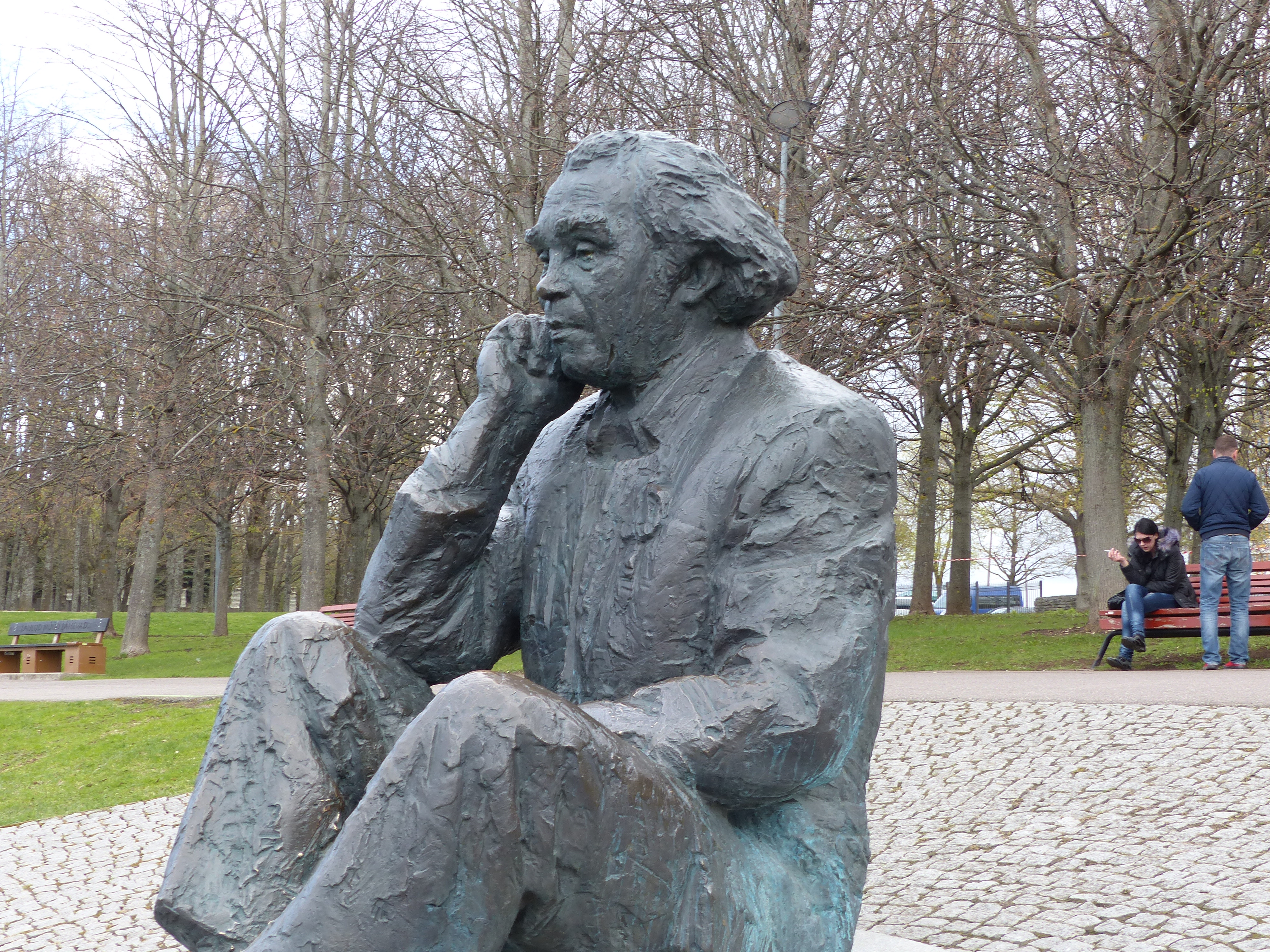 The festivals of the 1950s were during a really dark time for Estonia. Soviet songs, Soviet bands, and Soviet choirs dominated the program and Ernesaks’ song, “My Country is My Love,” was banned. This song is actually a century-old poem that he set to music and served as every Estonian’s musical statement of their longing to be free. The first song festival of the 1960s started out in a similar fashion with the Estonian songs banned from the program, but the people had had enough. In complete defiance of the Soviet dictates, at the one hundredth anniversary of the festival in 1969, the choirs started spontaneously singing their beloved song. The Soviets ordered a military band to play loudly, hoping to drown out the voices of all the singers. The band was no match for the song of over one hundred thousand singers. The people continued to sing the song over and over. The Soviets, in order to make it look like they were in control of the situation, invited Ernesaks on stage and pretended it was all planned.

In 1985, only forty eight of the eighty two songs on the program were by Estonian composers. Soviet choirs and bands continued to dominate the festival. Still, the song festival held tight as an anchor for the people of this tiny country. Apparently, the people were not keen on a repeat performance at the last festival of the 1980s. In 1987, Night Song Festivals took place in Tallinn’s Old Town. The people waved three thin flags together-one black, one blue, and one white-in complete defiance because it was illegal at that time to own an Estonian flag, but waved together, the three flags symbolized the illegal banner of Estonia. In June of 1988, as the Estonians prepared for the 1989 festival, throngs of citizens began to spontaneously gather at the festival grounds and sing for five nights until dawn. They always sang their “Five Patriotic Songs” and the crowd size actually swelled to hundreds of thousands. In 1989, when the Baltic Chain was formed, the Estonians celebrated their solidarity with each other and the other Baltic countries with song. Since the movement was non-violent and no blood was shed, Gorbachev would have a hard time justifying storming the country with tanks and troops in light of his efforts at Glasnost. Killing people for singing would not be a good look on the world stage.

Now, when the Song Festival is held, the celebration starts and ends with the same patriotic songs. The Estonians have shown that nothing and no one can divide them and they reaffirm their commitment to each other each time they celebrate their unique Song Festival. Estonia is a tiny nation with a big heart full of song. It turns out that it is easy to take lots of stuff away from people, but it is impossible to take away a shared song in the heart of a nation.