The Cottage Wars: Keeping Up with the Joneses 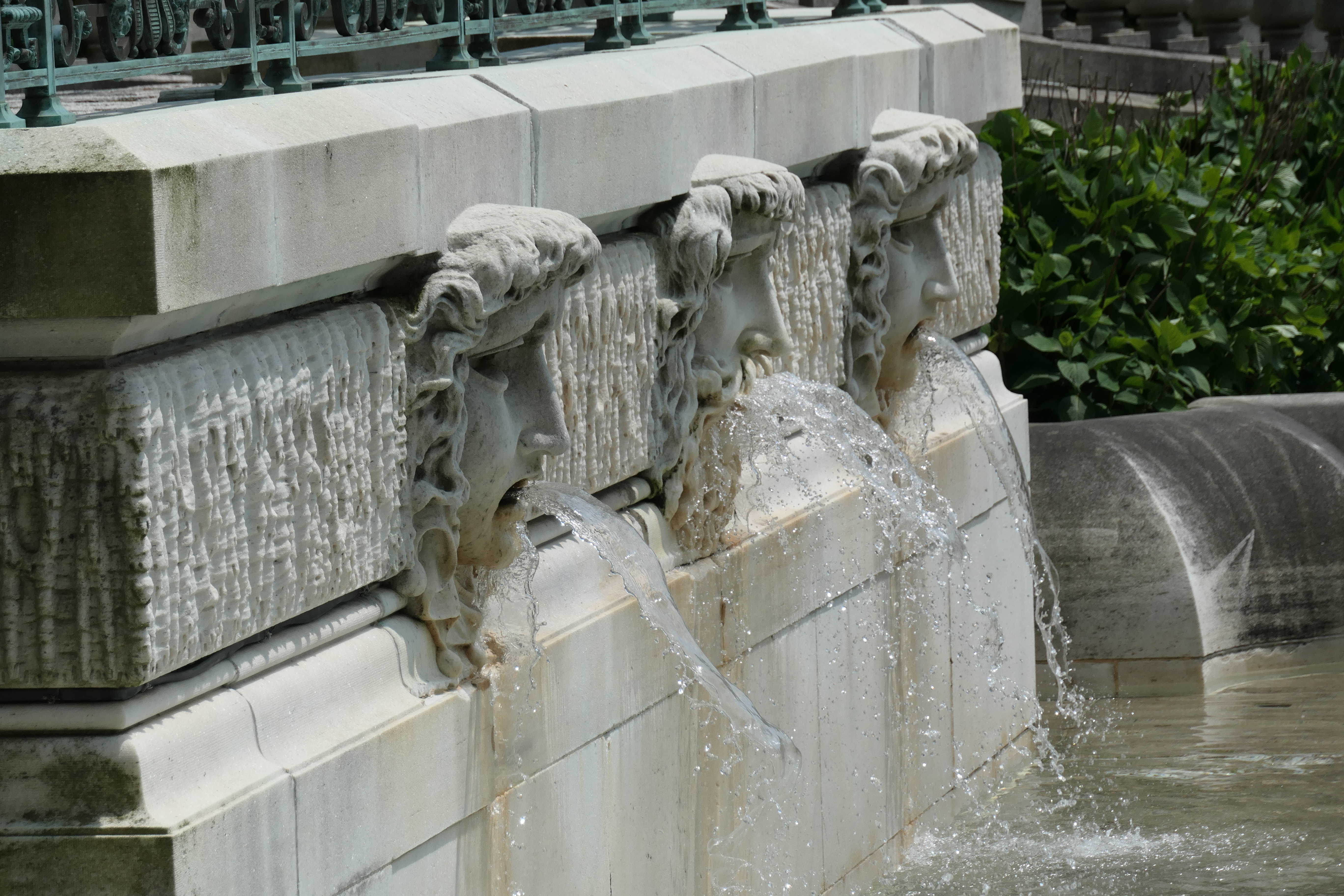 George Frederic Jones and his wife, Lucretia Stevens Rhinelander Jones, were the real-life inspiration for that old expression, “keeping up with the Joneses.” As we all know, the expression describes, in a nutshell, competitive spending. The Joneses had extravagant homes in both New York and Newport and threw parties that were the talk of the town. They had enough money to free Mr. Jones from the drudgery of working. They weren’t the wealthiest members of the Gilded Age movers and shakers, but their pedigree was rock solid. Their daughter, Edith, felt stifled by the rules society tried to impose upon her. Although she never eschewed wealth, she did scorn the restrictive duties expected of young female socialites. Basically, these young women married well and entered a life as career hostesses. Edith did marry, but refused to play by those rules and instead followed her own dream, instead becoming the respected writer Edith Wharton.

The Gilded Age began roughly around the 1870s and lasted until about the middle of the second decade of the twentieth century. It was a heady time for those with old money as well as the nouveau riche in America. During the decades between the Civil War and World War I, the Cottage Wars flared up with skirmishes on several fronts in the Northeast but Newport, Rhode Island could probably be considered ground zero.

Mrs. William Backhouse Astor II (Caroline Webster Schermerhorn Astor) assumed the position of matriarch of the Gilded Age Society, which she ruled for four decades, primarily from New York City. She wanted the elite of America to be held as equal to the upper crust of European society. Caroline’s society had two factions, the Nobs (old money, excellent bloodlines) and the Swells (new money, dubious family lineage, social climbers, you know—all things tacky and gauche—ugh!). Caroline was the self-appointed arbiter of who was “in” and who was ”out.” At the very minimum, anyone seeking acceptance into society had to be three generations away from the family member who acquired the family fortune in the first place. The three generation rule, oddly enough, coincided with the Astor family’s generational separation from the uncouth and socially unacceptable original John Jacob Astor.

The Vanderbilt family rose to prominence when they became the richest family in the country. However, Caroline Astor was not sure that they were worthy of inclusion on her “list of four hundred,” and proceeded to snub the Vanderbilts. Long story short, Alva Vanderbilt outmaneuvered Caroline and Mrs. Astor was forced to include the Vanderbilts on the list.

With that thorny little problem solved, the Vanderbilts set their sights on reaching the pinnacle of Newport society since the Gilded Age crowd summered on the island each year. The “season” lasted about eight to ten weeks and it was jam-packed with luncheons, tennis matches, equestrian events, beach outings, sailing, and soirees. All the right people were included in all the right events. Being left out was just not an option to the Vanderbilts. But they had no desire to merely “keep up with the Joneses;” they were determined to leave the Joneses and everyone else in the dust. In Newport, real estate was an excellent way to make a big impression on established society and the Vanderbilts would take second place to no one. They got downright competitive with their building and, as a result, the term “Vanderbuilding” became part of the Newport vernacular.

Another Vanderbilt, George, did a little Vanderbuilding of his own with his French chateau in Asheville, North Carolina, which, to this day, holds the title as the largest private home in America. It was our time at the Biltmore that inspired us to travel to Newport to see the cottages there. Having read a good bit about the Gilded Age, we were excited to finally see Newport. Heretofore, our idea of a cottage was the little two bedroom building of approximately 1600 square feet that occupies a small section of our property. (See picture below.) By contrast, in Newport, cottages are actually rather palatial. You need to see them to believe anyone would use the term “cottage” to describe them. It is unfathomable that these mansions and palaces were occupied no more than ten weeks a year. I think the pictures of the Newport “cottages” are ample evidence of the excesses of the Gilded Age. 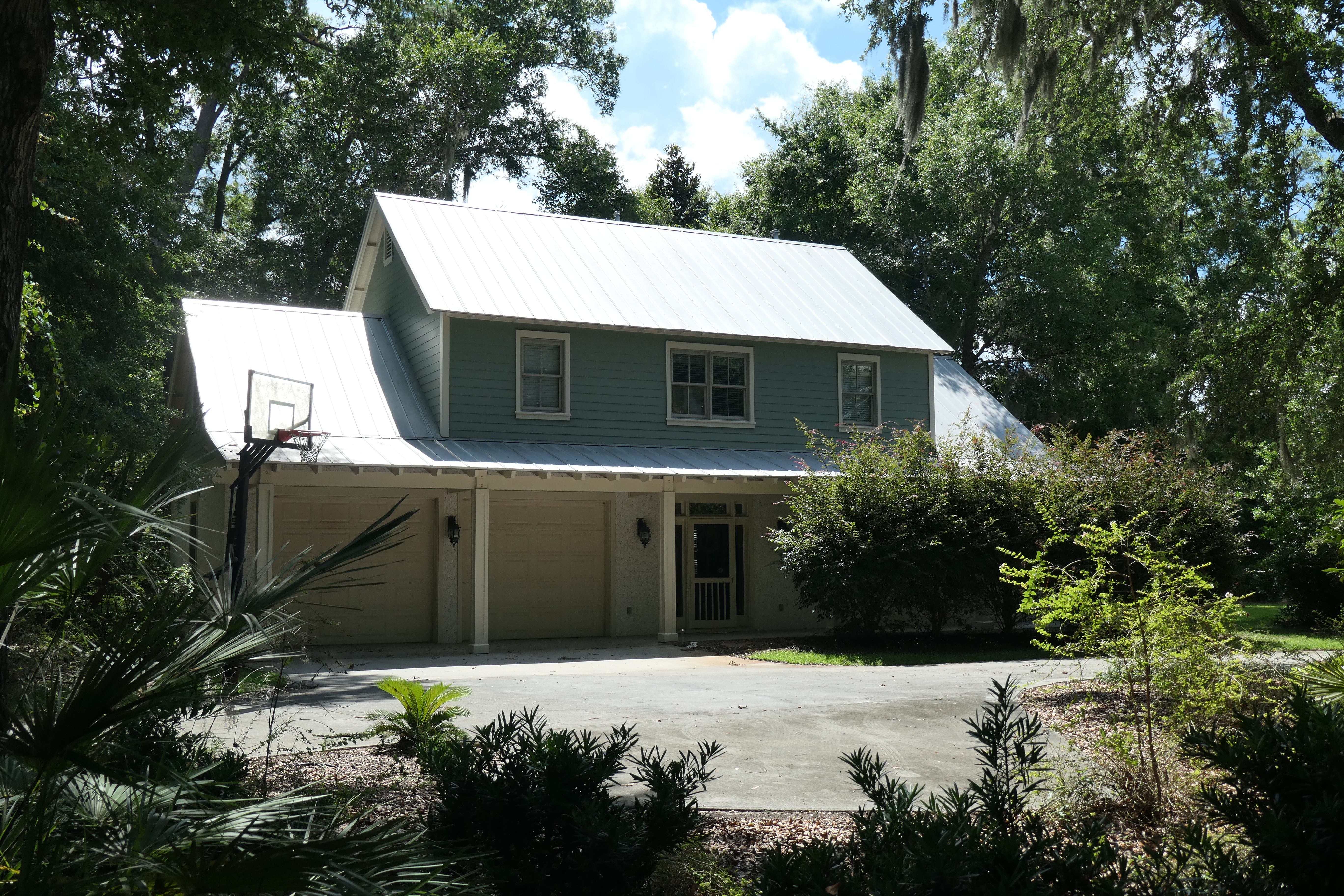 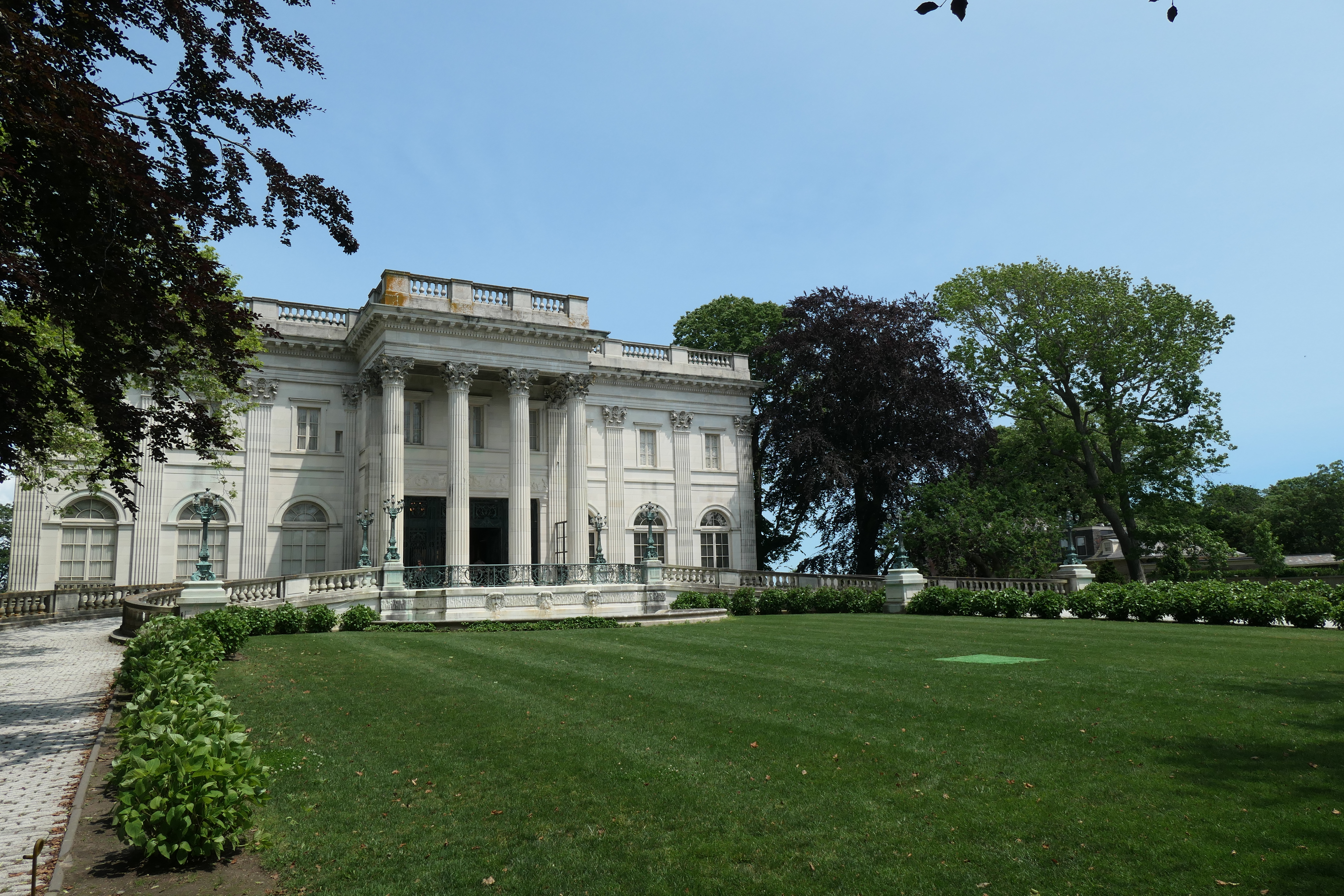 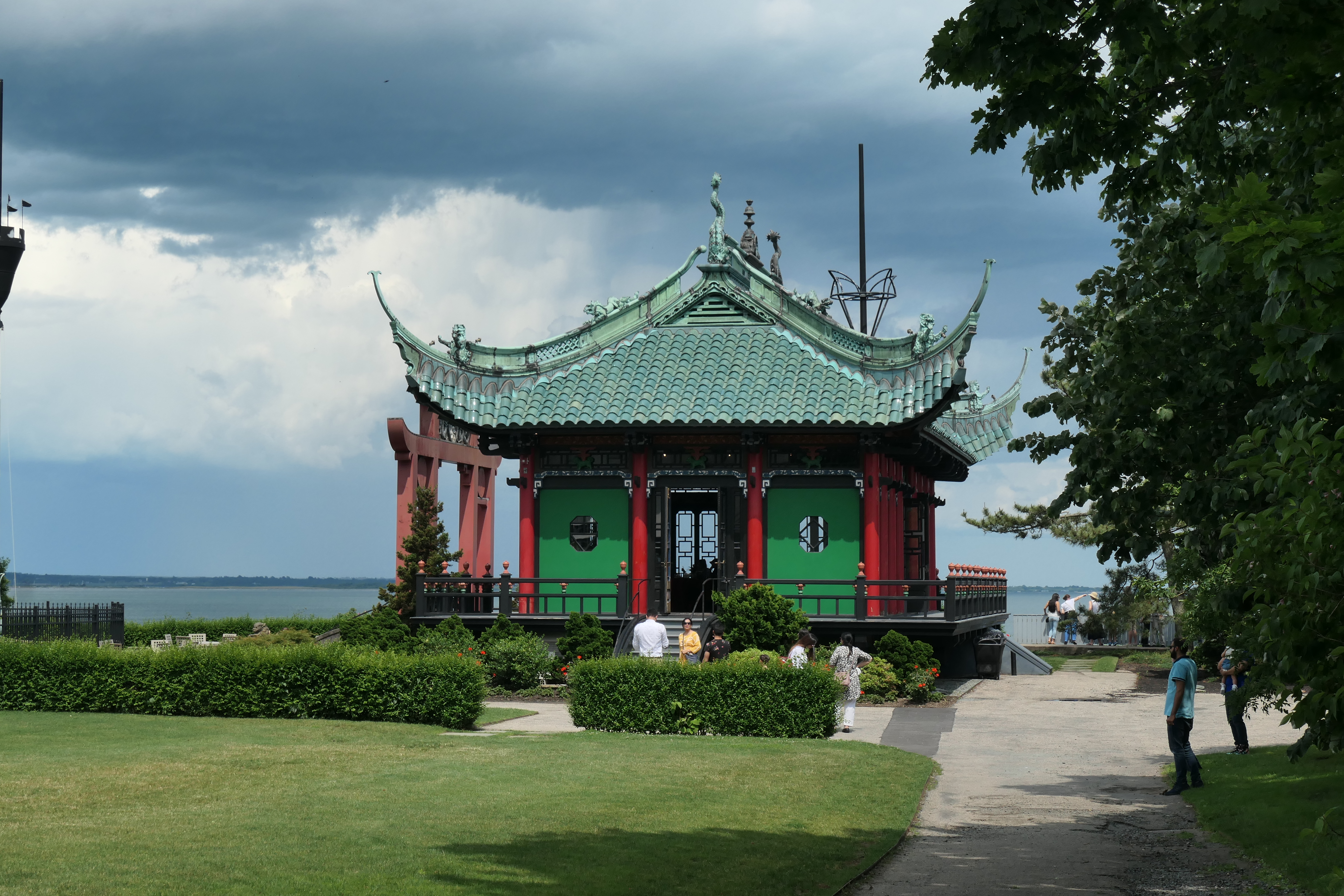 Alva needed a Chinese Tea House out back for one of her parties. We all know that feeling, right? 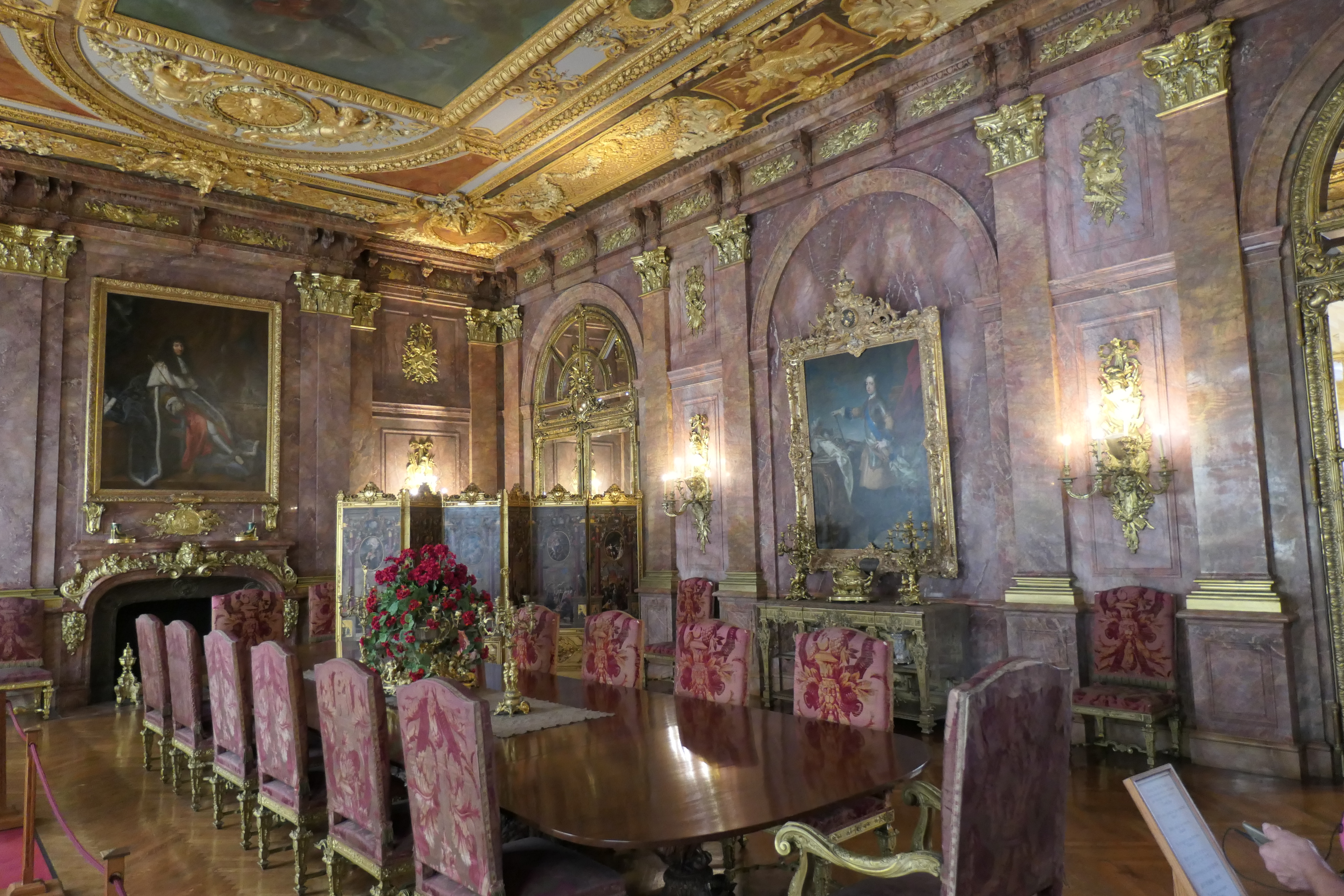 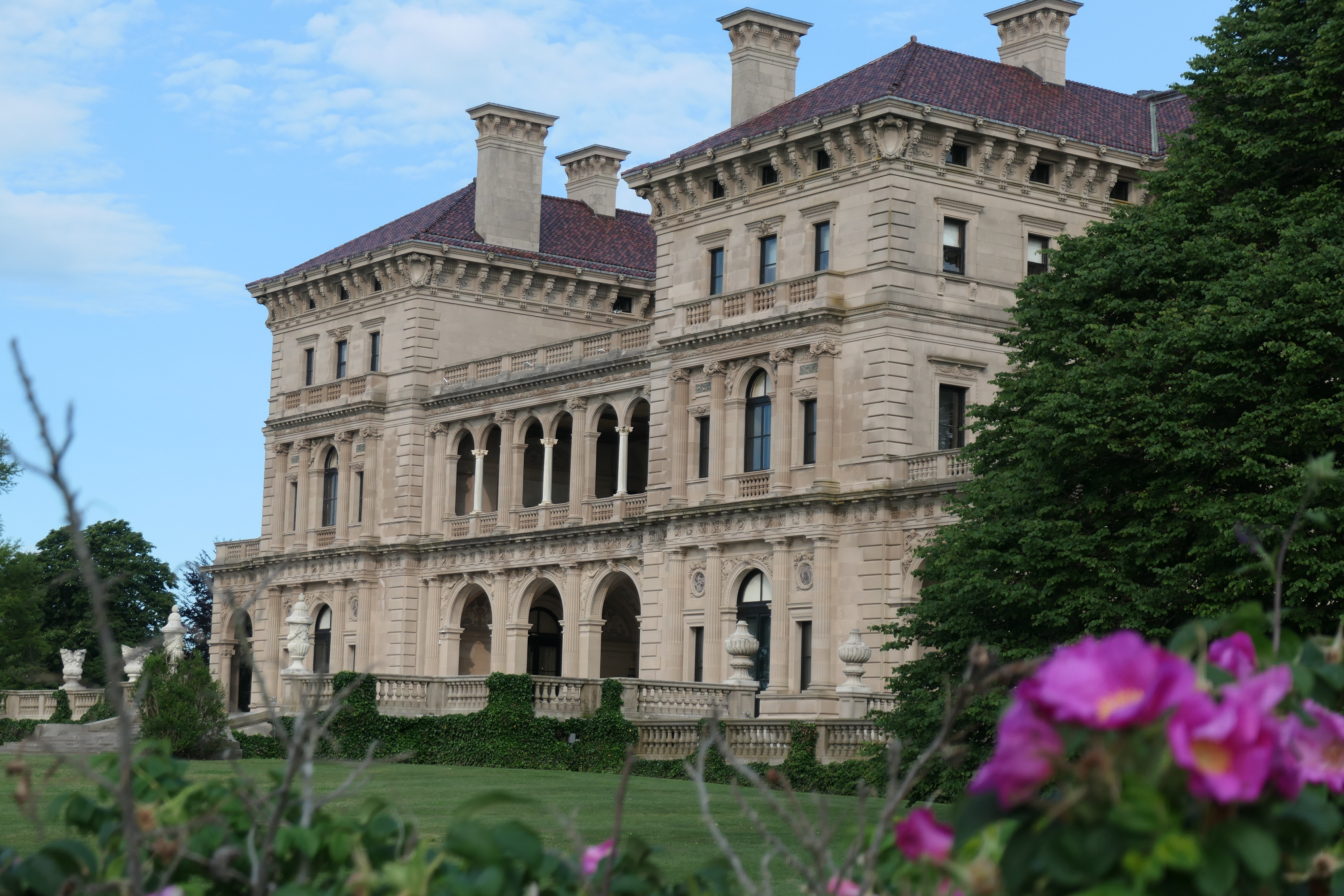 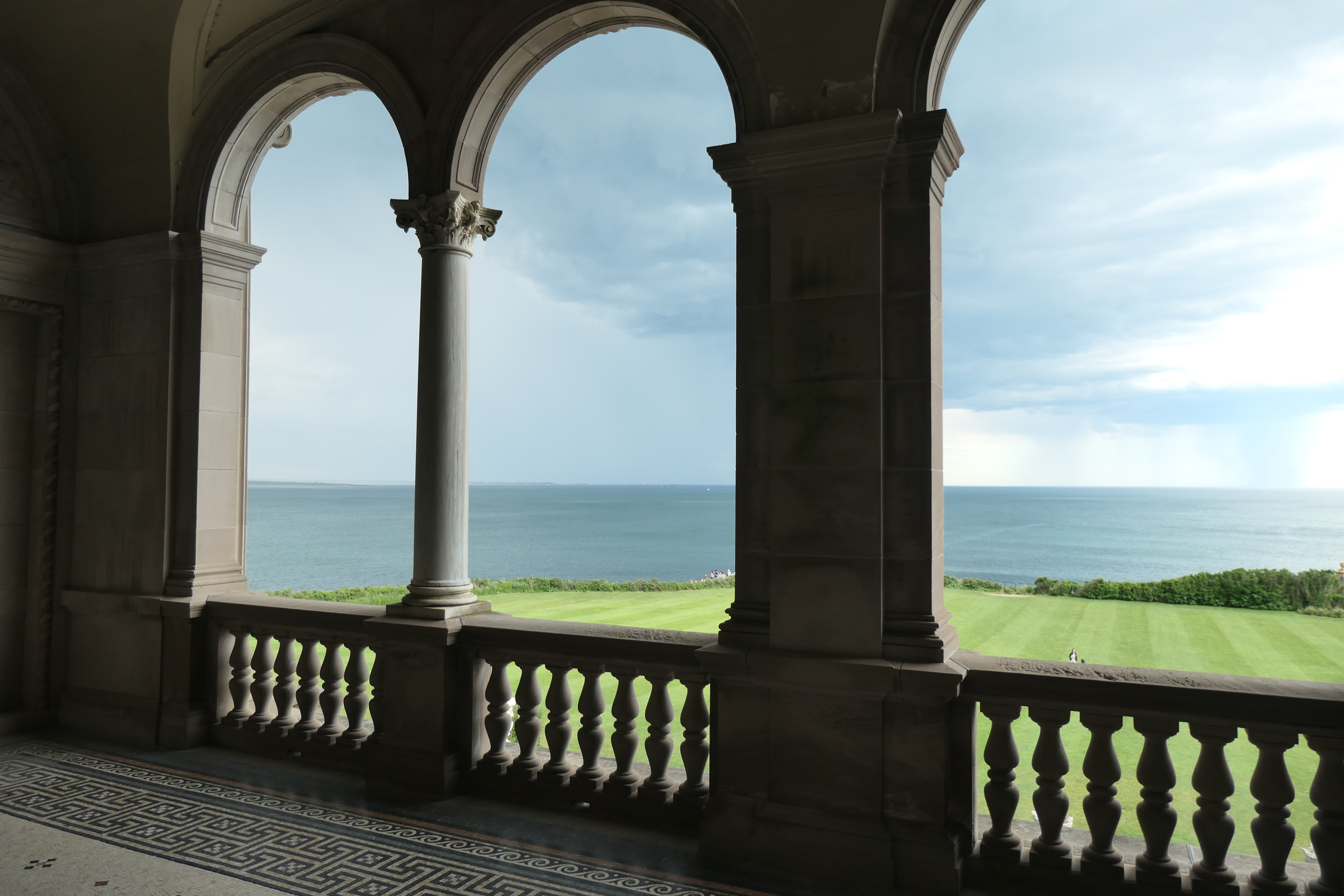 The ocean view from The Breakers. 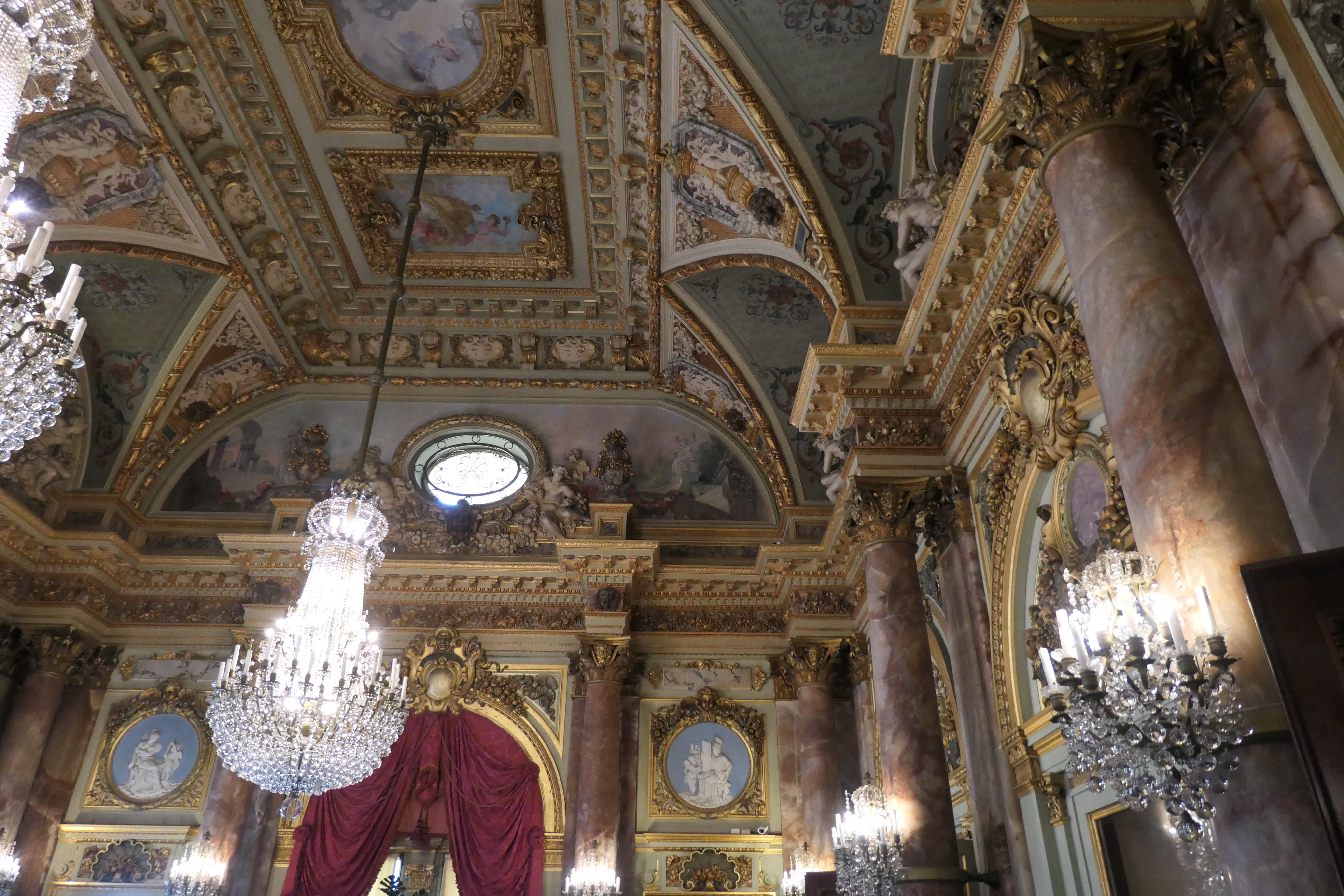 The ceiling of the dining room at the Breakers. 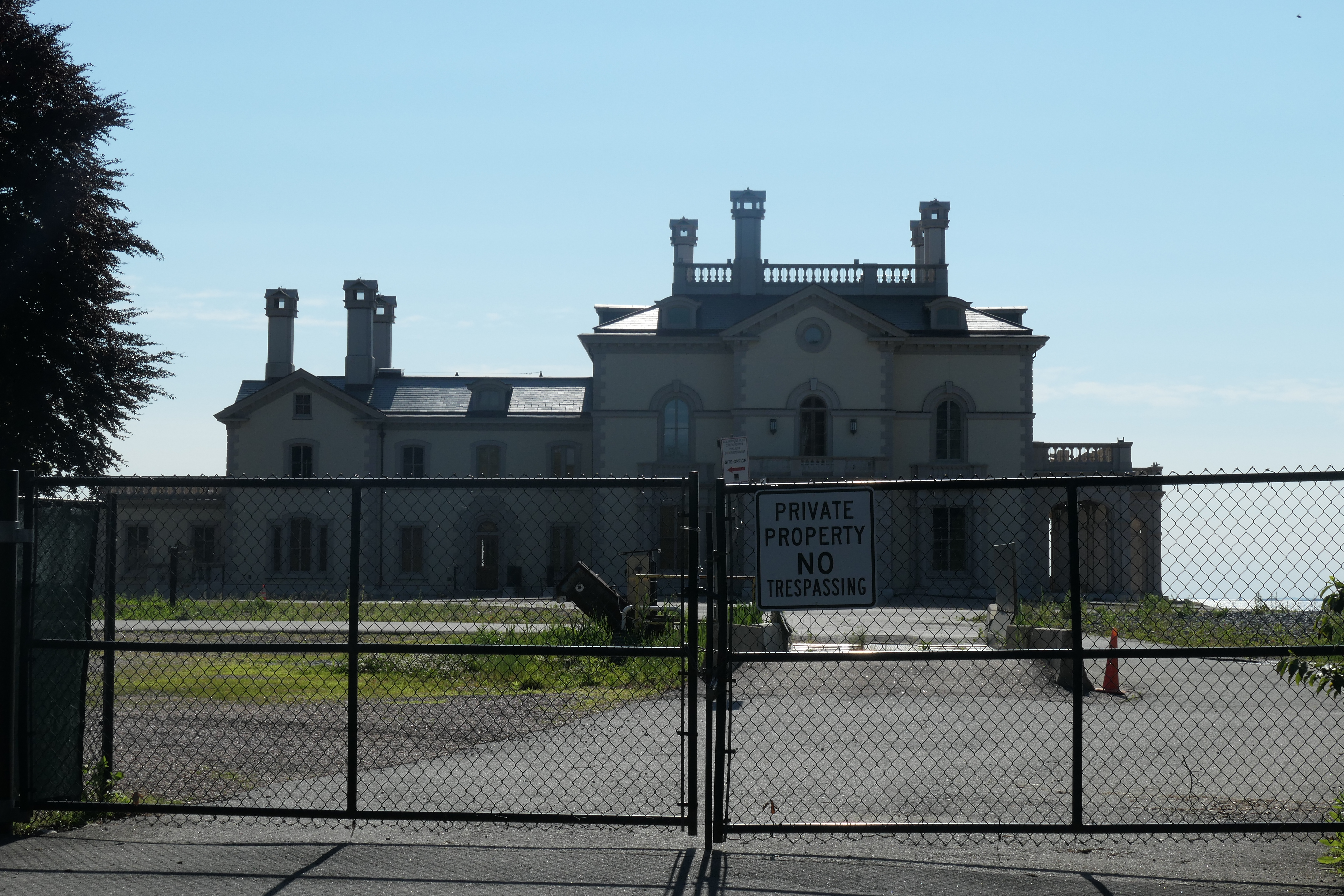 Beechwood—the former cottage of the Astor family. Beechwood is now the property of Larry Ellison of Oracle. He has spent the last six years renovating and now needs to do a little landscaping. He owns four contiguous Newport properties.

Edward J. Berwin from Pennsylvania made it big in the coal business. He bought an estate called The Elms on Bellevue Avenue. Bellevue was the right address in Newport. He demolished the home and built an even grander estate. The only problem was that his money was “new.” Newport society shunned him. Mr. Berwin decided to have the last laugh. He placed huge planters all along his property walls with his likeness on two sides. As the high society carriages paraded up and down Bellevue Avenue, they were forced to look upon his face coming and going. 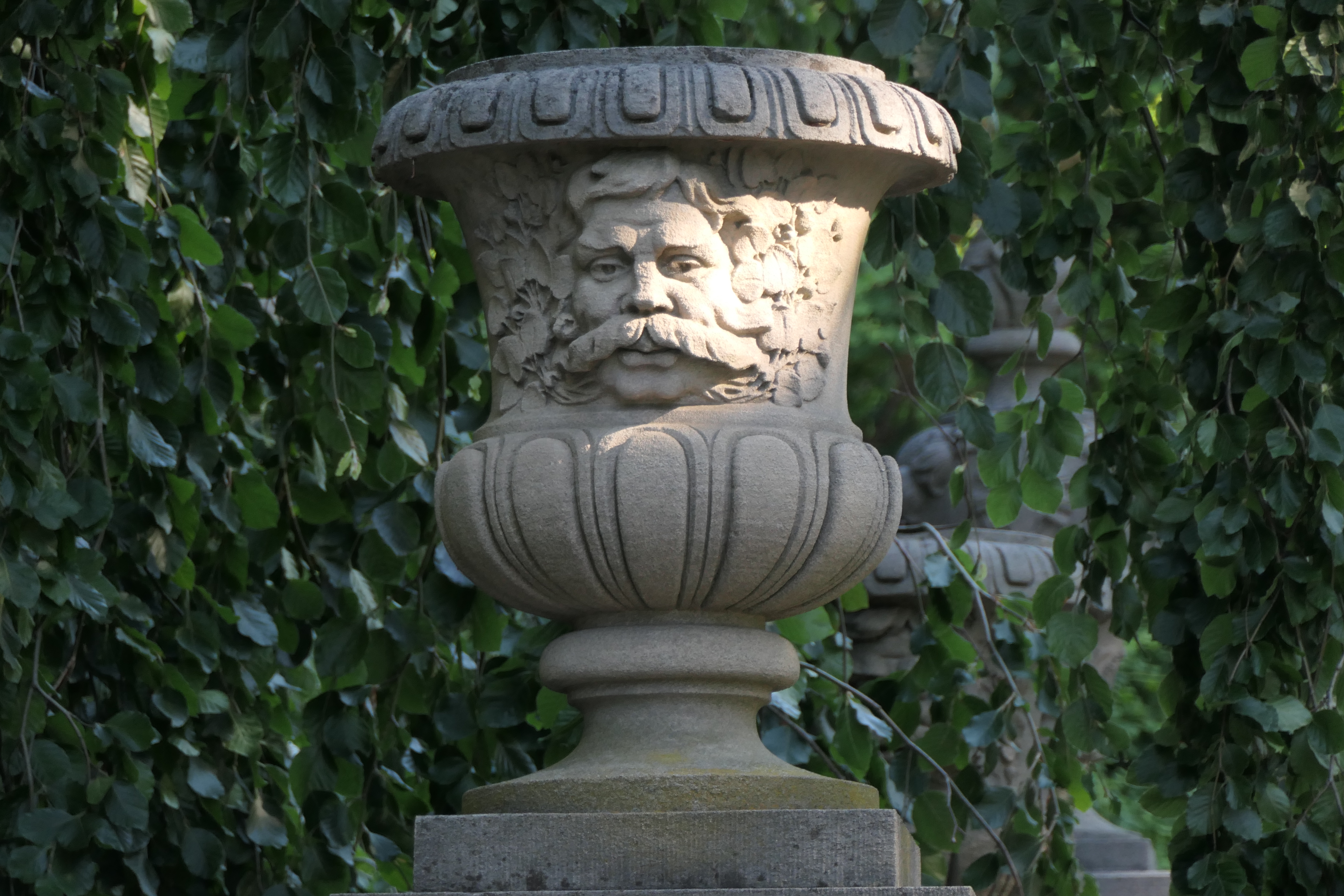 One of Mr. Berwin’s planters.

Rhode Island is said to be where the American summer vacation was born and Newport is where it reached its zenith of hedonism. It is impossible to comprehend the excesses of this place and time. Elizabeth Drexel Lehr, herself a member of the elite society, gave an apt description of the summer season. “America will never again, I think, see entertaining on such a lavish, such a luxurious scale. Into those six or seven weeks were crowded balls, dinners, parties of every description, each striving to eclipse the other in magnificence. Colossal sums were spent in the prevailing spirit of rivalry.” My favorite description of Newport was given by Grand Duke Boris Vladimirovich, a cousin of Nicholas II, the last Tsar of Russia. The grand duke was no stranger to a life of excess and opulence. He visited Newport around the turn of the twentieth century and declared, “I have never dreamt of such luxury as I have seen in Newport! Is this really your America, or have I landed on an enchanted island? Such an outpouring of riches! It is like walking on gold. We have nothing to equal this in Russia.”