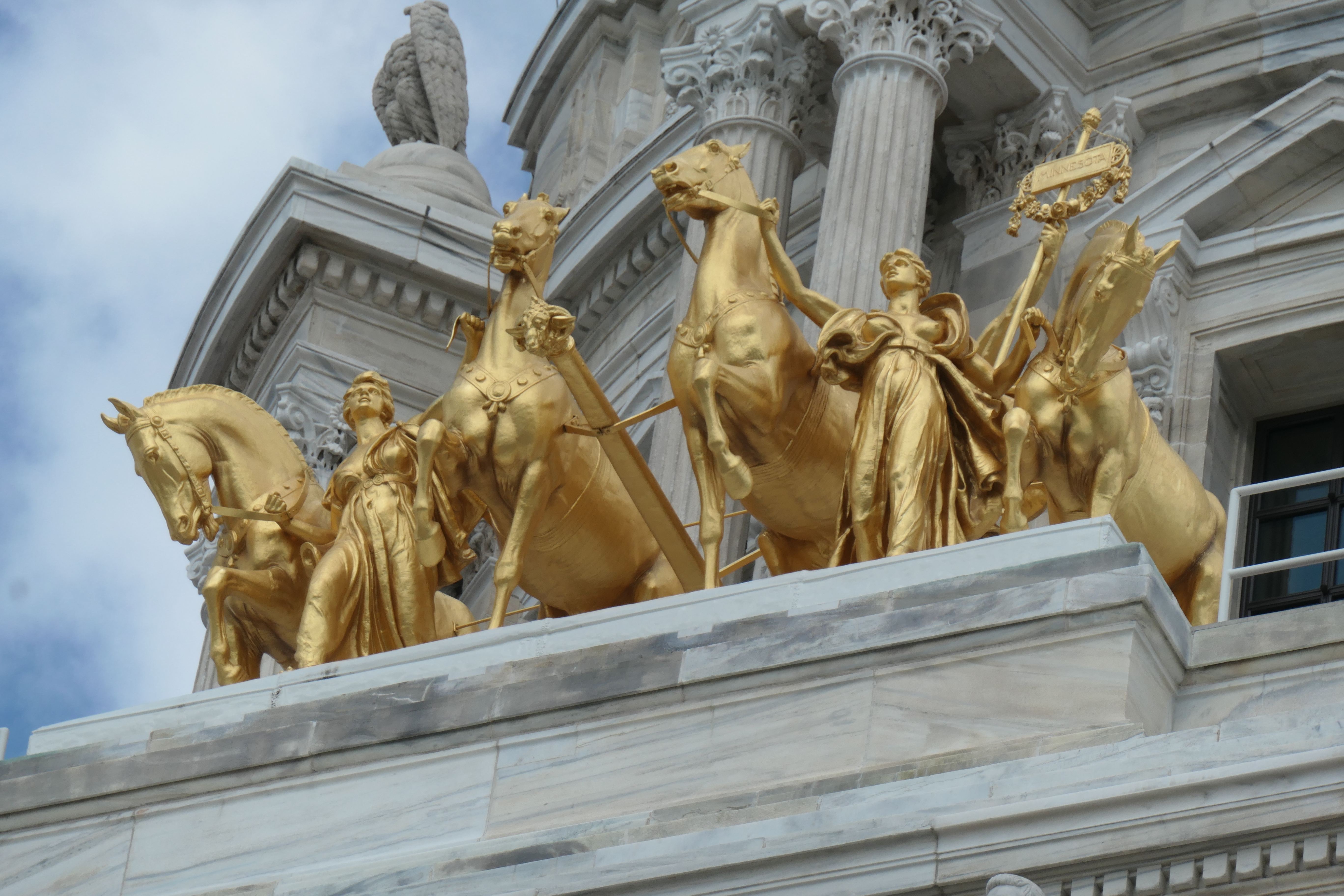 I don’t know about you, but I’ll admit that I have never given much thought to quadrigas. To be perfectly honest, I didn’t even know what a quadriga was until I started reading about the Minnesota state capitol in St. Paul, Minnesota. Although I will not say that they are boring, I find that state capitols are stunningly similar. Is there a law dictating how capitols must look or was it just herd mentality at work? Perhaps everyone feels the need to emulate the US Capitol in Washington, DC, but I must hand it to those Minnesotans; they got rather creative with theirs by adding that gilded quadriga over the south entrance. There are many examples of quadrigas around the world. Of course, Paris has several. There is one atop the Brandenburg Gate in Berlin and there are quadrigas adorning buildings from Milan to Moscow. However, there are very few in the United States. I believe there is one at a cemetery in Fort Worth, Texas and also one in Detroit. A beautiful quadriga served as the majestic crown on top of the “Grand Arch of the Peristyle” at the World’s Columbian Exposition in Chicago the 1890s. In fact, the Minnesota capitol design was inspired by the Beaux-Arts architecture of that exposition. Sadly, the Peristyle burned to the ground in January of 1894, but Daniel Chester French was a determined soul. That was not to be his last quadriga. Along with Edward Clark Potter, he designed Minnesota’s gilded quadriga. Named The Progress of the State, it was raised to the roof of the capitol in 1906. The women leading the horses represent Minnesota agriculture and industy and the man in the chariot symbolizes the state of Minnesota. The beautiful gilded horses represent the power of nature: wind, water, fire, and earth. The quadriga was fashioned from a steel frame that is sheathed in copper and gilded with gold leaf.

The capitol building was designed by Cass Gilbert. At the time he designed it and supervised the construction, he was relatively unknown, but the response to this magnificent building catapulted him to prominence in the world of architecture. He modeled the state house of Minnesota after Saint Peter’s Basilica in Rome. The dome in Minnesota is the second largest unsupported marble dome in the world, just after the one at Saint Peter’s. Also in this elite group of unsupported domes of the world is the dome of the Taj Mahal and the dome of the state house of Rhode Island. We stood below that one in June when we visited Providence, and we gazed upward at the one at Saint Peter’s Basilica many years ago. We need to head over to the Taj and check that one out. 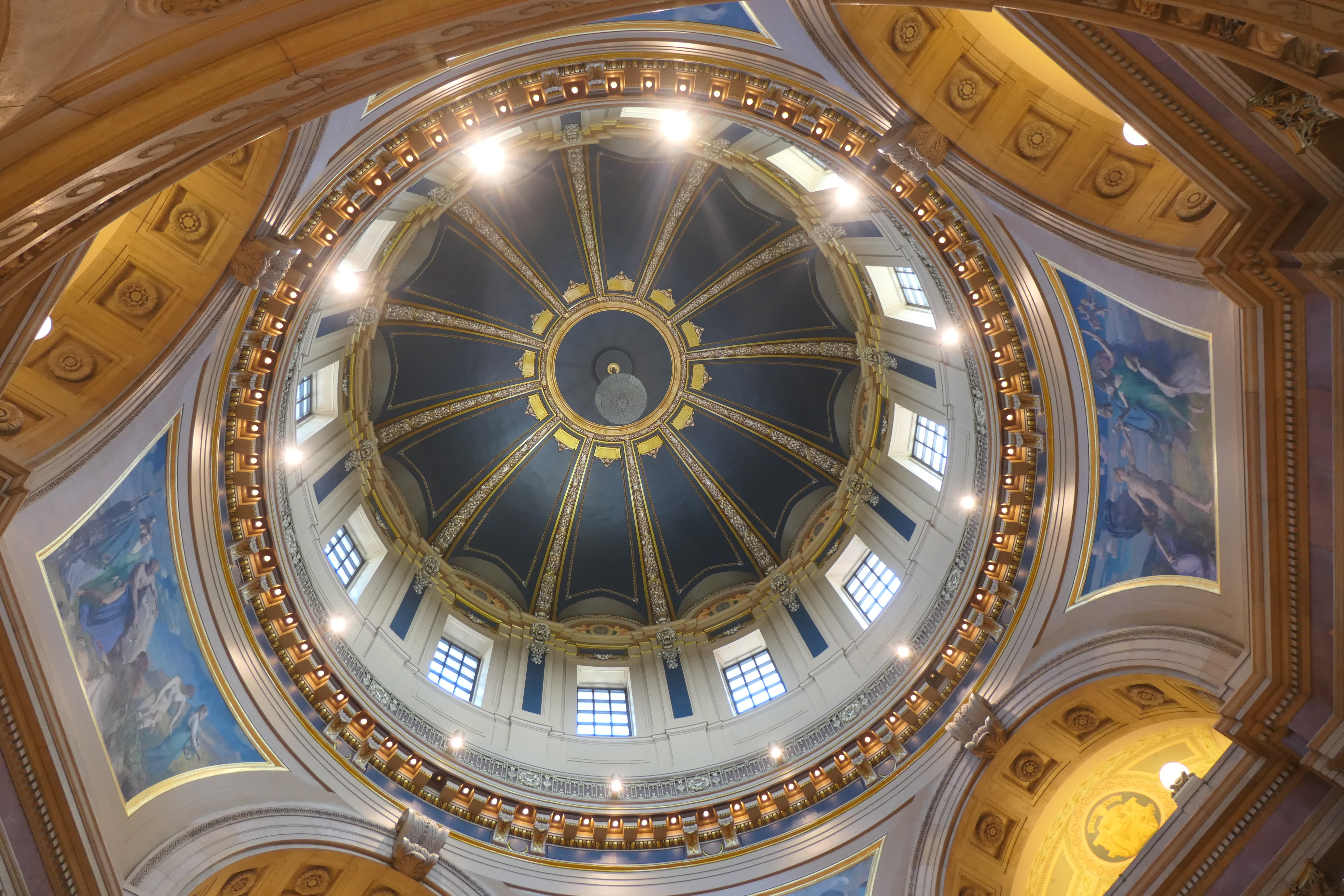 Believe me, this dome is a stunner. In fact, everything about this building is beautiful. Honestly, I do believe that I have never visited a restroom anywhere as beautiful as the public restroom on the first floor of this building. Sounds weird, but the people’s house of the North Star state looks as though every single nook and cranny was carefully designed with an eye toward beauty as well as the personification of the ideals of freedom and liberty. The art in this building is incredible as are the chandeliers and other light fixtures.

Heretofore, the state house of Wisconsin had been my favorite of those we have visited. That gilded quadriga changed everything and I now declare Minnesota’s state capitol the clear winner! I will share a few more pictures for you to enjoy since it is so unique and such a work of art. 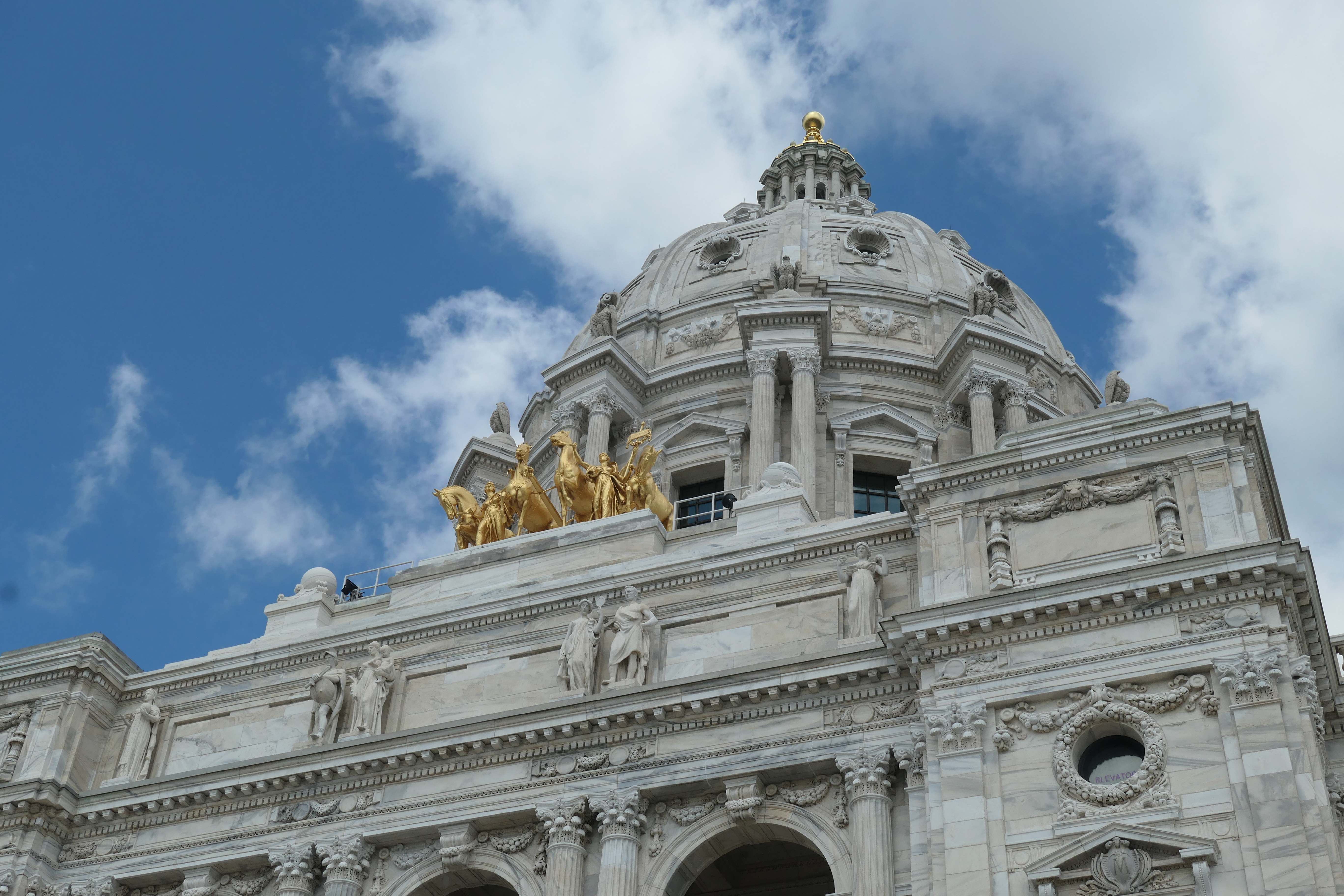 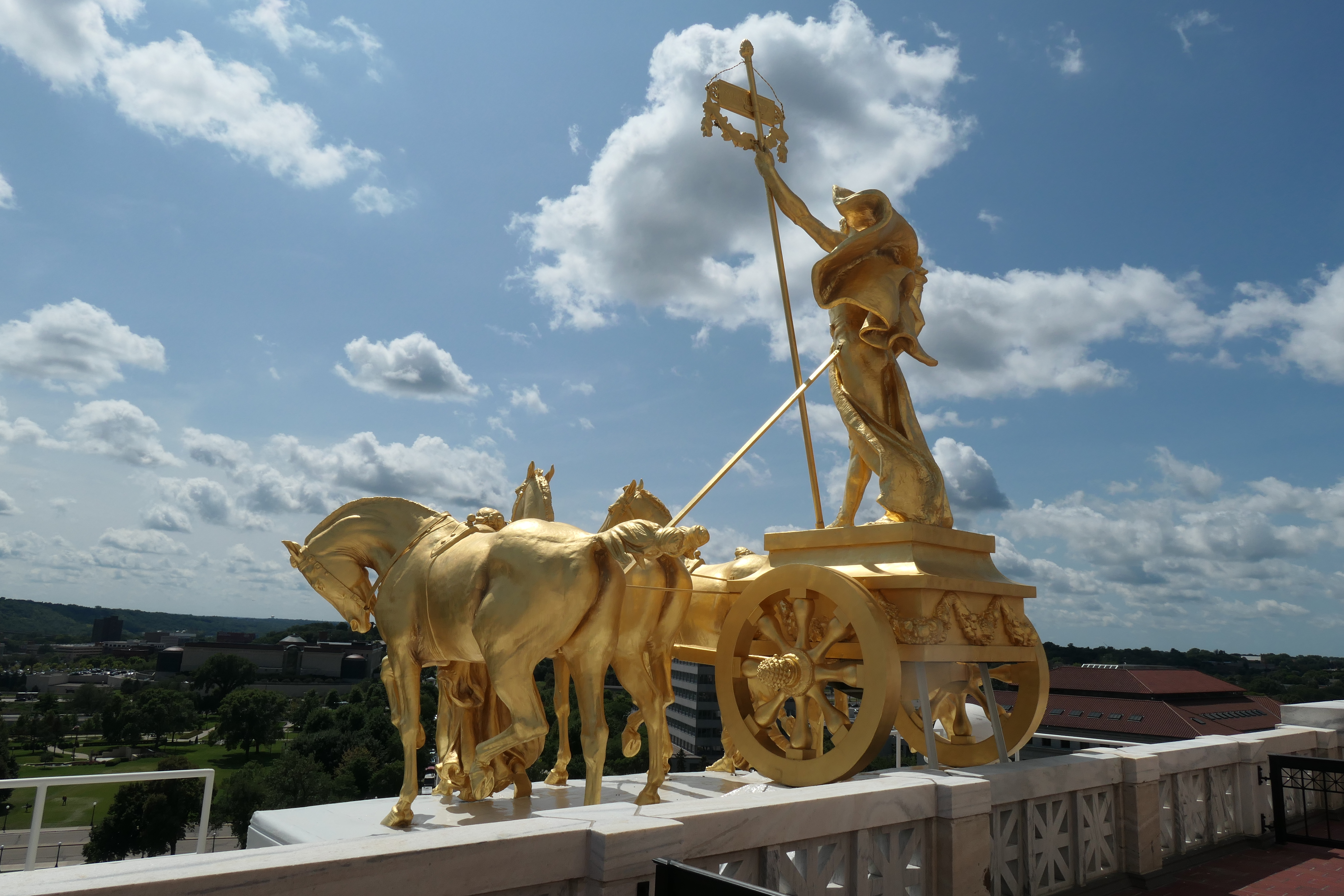 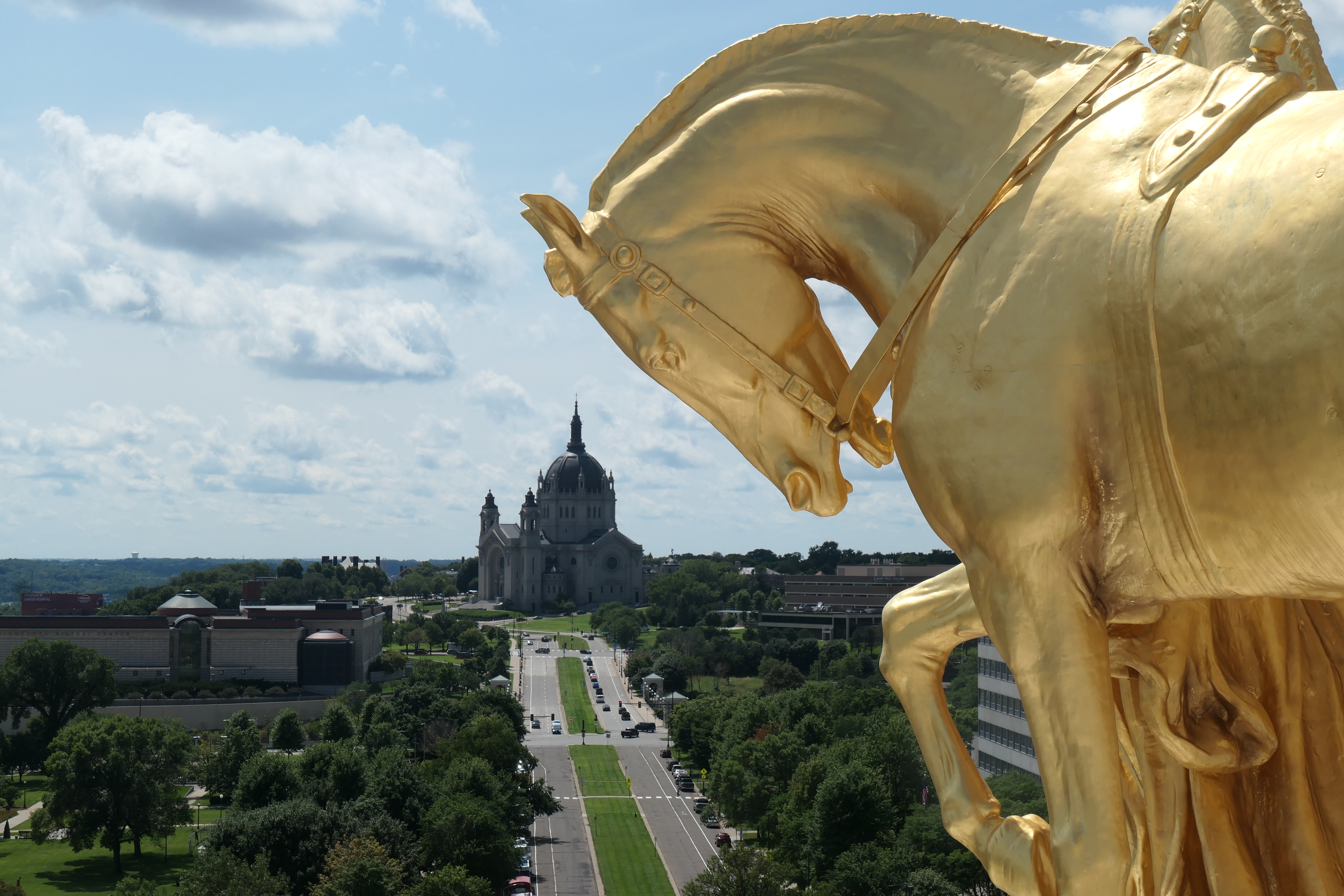