What Lies Beneath the Prairie

“A nuclear-missile silo is one of the quintessential Great Plains objects: to the eye, it is almost nothing, just one or two acres of ground with a concrete slab in the middle and some posts and poles sticking up behind an eight-foot-high Cyclone fence, but to the imagination, it is the end of the world.”  —-Ian Frazier, Great Plains, 1989

We are way out here on the South Dakota prairie, home to more bison than people, between Interior, SD (pop. 50) and Wall, SD, home of Wall Drugstore, South Dakota’s answer to our South of the Border. At Wall Drugstore, you can get free water but, if you are a newlywed, ask for the free pie and coffee. There’s a gas station up the road where you can throw food out to some prairie dogs, which are basically flea-bitten rodents with good communication skills. Good times, I tell you.

The area is home to the Badlands National Park. The park covers 212,000 acres and is the main reason we came here. The terrain is rather inhospitable but beautiful in a weird sort of way. There was a massive herd of bison hanging out on Badlands Loop Road yesterday. We saw several lone male bison, one who obviously lost a battle and, along with it, his left horn. We saw a huge prairie dog town and some female bighorn sheep. Last night, we went to the park’s night sky program and it was fascinating. They had a couple of really nice telescopes set up and we were able to see Saturn with its rings as well as Jupiter and four of it moons. With no light pollution from a nearby city, we could see so much more of the Milky Way. This morning, we walked over to a nearby picnic table for a program called “Coffee with a Ranger.” He just talked about fossils and other fun stuff like rattlesnakes. When he asked where everyone was from, we found out that there was a group of three couples from South Carolina. They are doing the RV thing and riding bicycles around the parks. We spent a while talking to them after the ranger finished his spiel. As always happens when you get a group of Southerners standing around under a shade tree in a remote part of the country, the conversation turns to football. After everyone finished praising Dabo, we parted company. They are heading to Custer State Park, so we told them about the “Hook ‘Em and Cook ‘Em” program and encouraged them to do the Buffalo Safari with Matt. We told them it seemed a bit expensive, but that they would get their money’s worth; they said not to worry, they have already advised their children that if there is any money left when they depart this world, it means that they badly miscalculated. You gotta love Southerners. 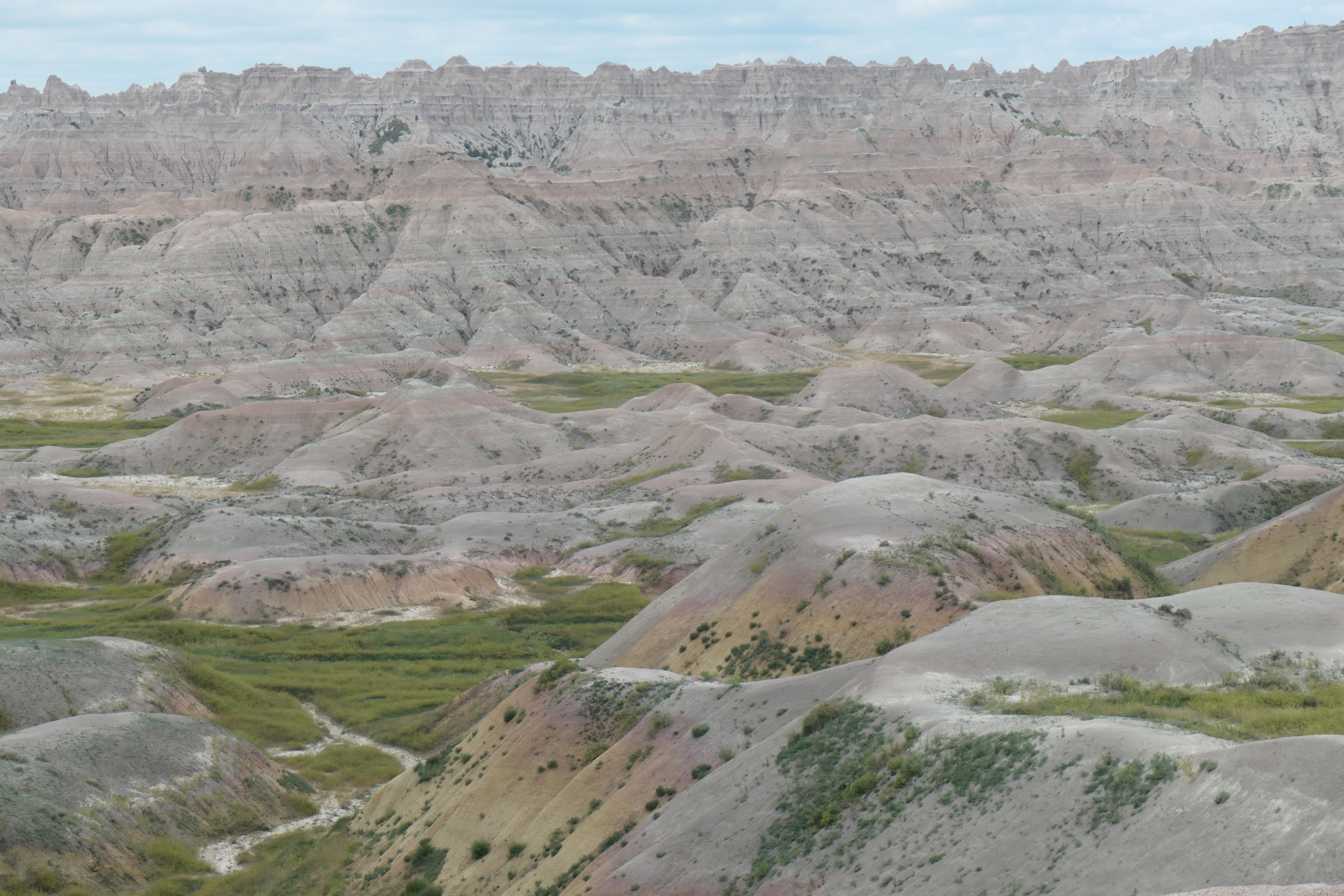 The Badlands of South Dakota

Well, it looks like I got off the subject before I ever got on it, so now I will circle back to my original topic. On the other side of I-90 is the site of a deactivated Minuteman II Missile facility. This was the first national historic site dedicated to the Cold War. The movie and the exhibits are just fantastic. They did a superb job of showing how Americans dealt with the threat by building fallout shelters, stockpiling emergency supplies, and ordering air raid kits. The part about “duck and cover” brought back fond memories of those drills at Millbrook Elementary in Aiken.

There were excellent exhibits explaining how, from 1949 until 1991, the US was engaged in a nuclear-fueled standoff with the former Soviet Union. Mutually assured destruction kept the peace. President John Kennedy called the Minuteman II missiles his “ace in the hole.” Five states across the Great Plains (South Dakota, North Dakota, Nebraska, Colorado, and Montana) became home to the Minuteman II missiles. There were one thousand intercontinental ballistic missiles (ICBMs). The region was chosen for several reasons. There were no large metropolitan areas with millions of residents, and this was important because the Soviets had missiles pointed at our missiles. Another reason was that it was good place to put missiles that were going to be blasted over the North Pole to hit the former Soviet Union. They wanted to be able to serve up a hot one in thirty minutes or less.

The visitor center also has a really scary section on all the times either the US or the Soviet Union almost inadvertently ended the world. The term “false alarm” takes on a whole new meaning when you are talking about 1.2 megaton warheads. It is estimated that each country was probably responsible for at least six unintentional blunders that would have caused accidental nuclear holocausts. The worst mistake on the part of the US occurred in 1979 and the Soviets almost blew it in 1983. One of the Soviet officers on duty said that something just didn’t seem right and he was not going to launch their missiles. Failure to follow the command ruined his military career, but saved the planet.

With the signing of the START I Treaty, the Minuteman II missiles were deactivated and removed and the silos were destroyed. They left one launch control center and one deactivated silo to create this national park. There are several tours down into the control center each day, but because of the small area and tight spaces, only six people can go each time. When we realized that the tour was a possibility, there was only one space left. Since I always put others before myself, I signed Rick up for that tour. I will hand the iPad to him now so that he can describe his tour. 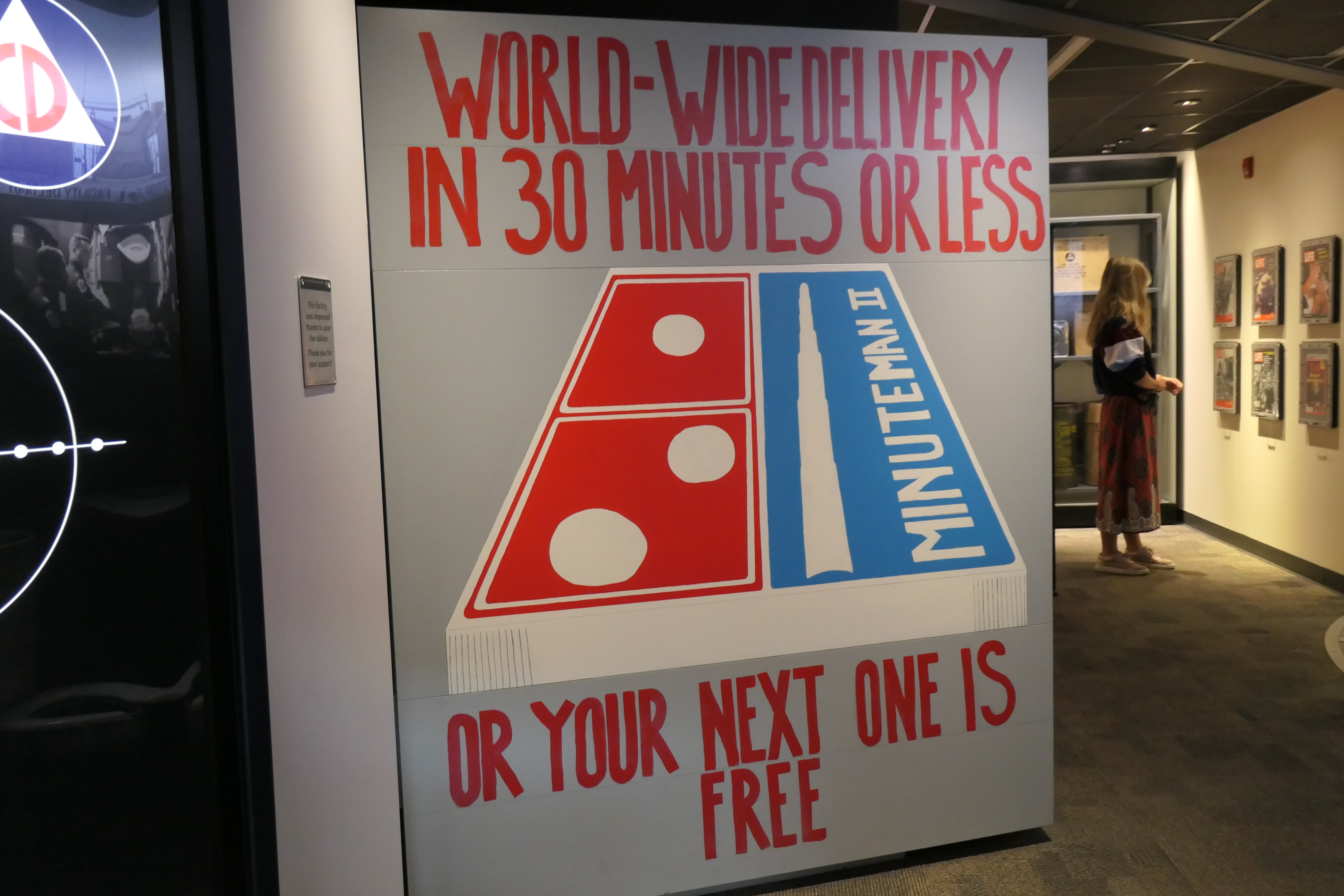 This is how the front of the 8 ton door to the control center is painted.

Rick: There were four in my group and we were met at the gate by a nice young lady with the park service. Outside the actual control center, there was a basketball court, horseshoes, and other ways for the men (and eventually women) to entertain themselves. The control center houses twelve people. There were three security personnel with automatic weapons and eight control center officers (missileers) who man the underground center two at a time. There is also a cook who prepares four meals every day. The above ground portion of the facility consisted of sleeping quarters, kitchen, and the dining area. The security personnel had quarters in this section of the facility. 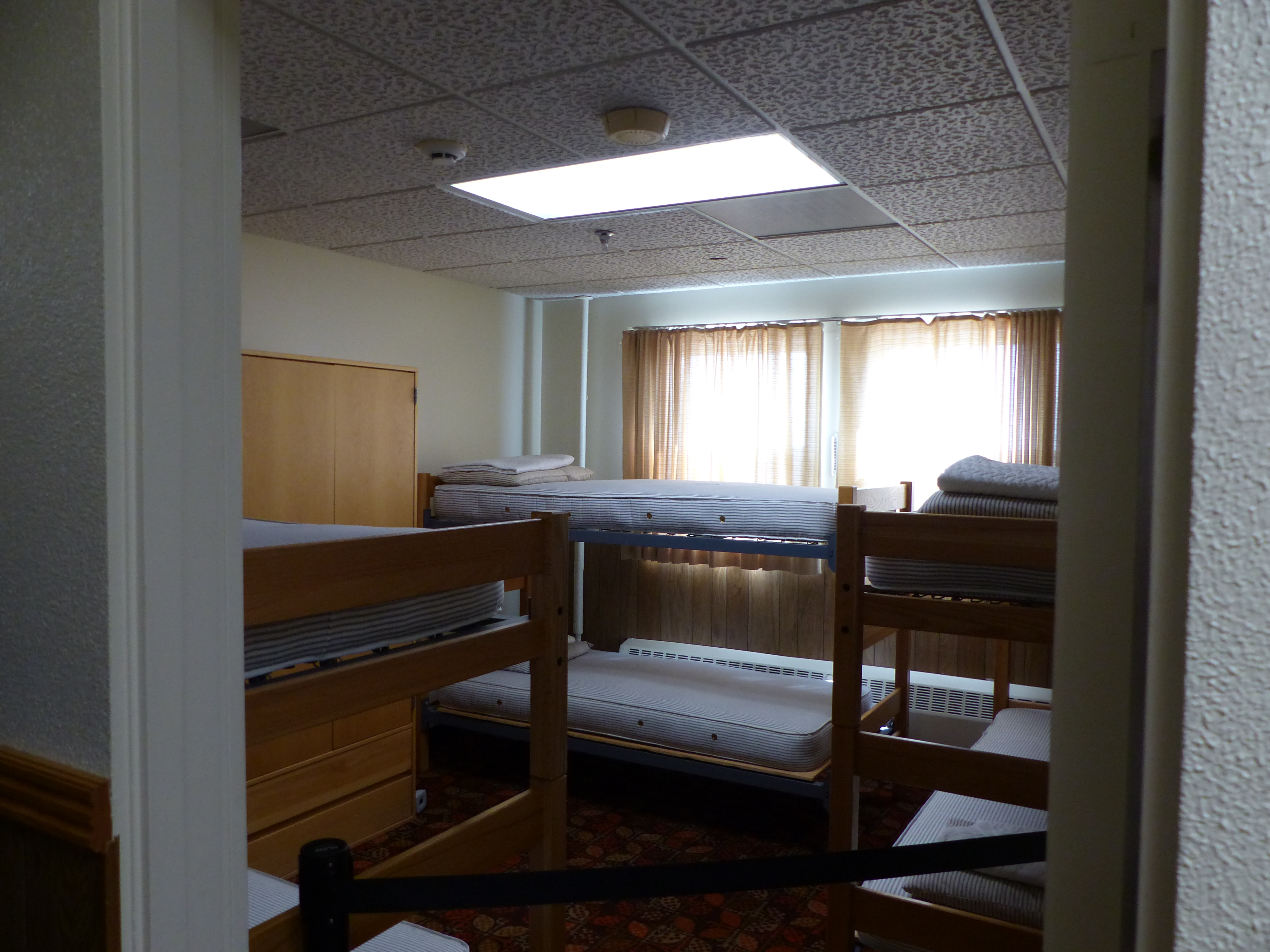 Above and below: the work stations of the control center missileers. 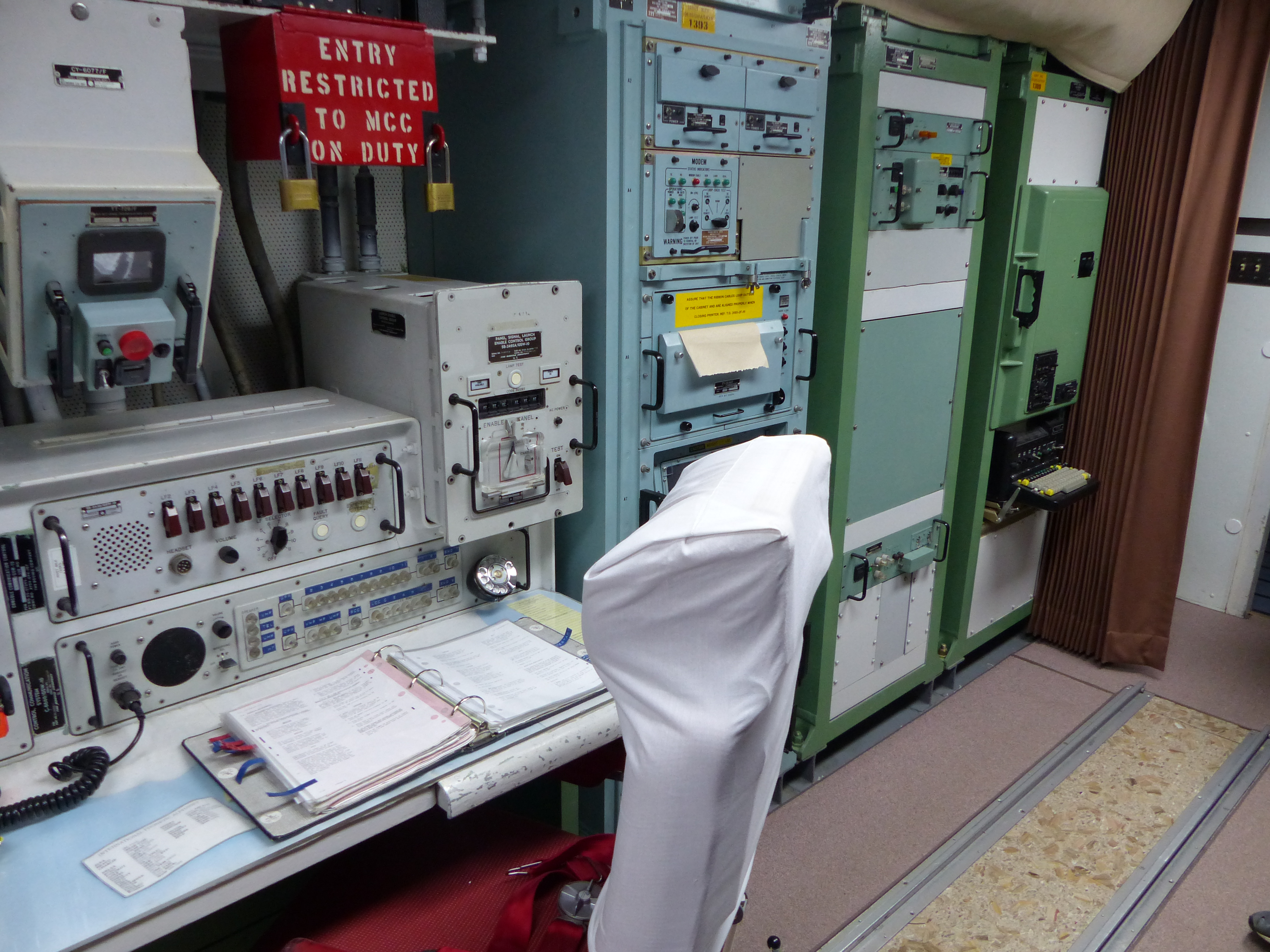 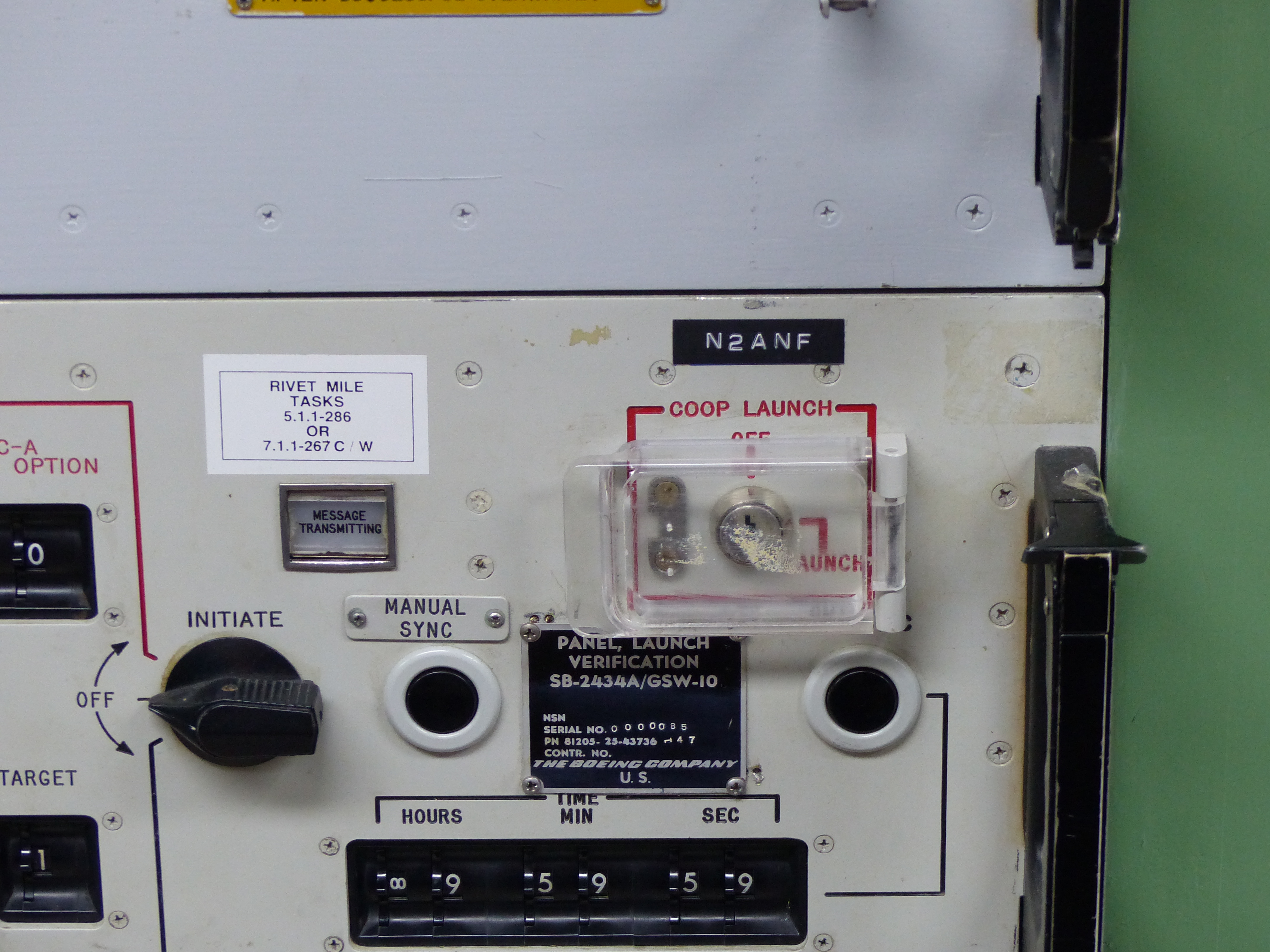 The two officers on duty are responsible for monitoring the systems. Each control center controls ten actual missile silos. If the phone rang, they would be given codes. Both of them would then have to unlock the safe with the code books and decipher the codes. If it was a launch code, each had a key they would have to use to launch the missiles. However, the missiles would not launch unless another control center put in the same appropriate codes. There were so many safeguards like this built into the system. Another was the “no-lone zone.” No one was able to initiate any action in these zones unless his partner agreed. Also, in the control center, there were mirrors and the officers were always within sight of each other so that they could always see what the other was doing. Here is a really interesting point: the computer programs are on floppy disks. This is not because their technology is outdated. It’s because they do not want anything related to their activity to be Internet based where it could be hacked.

Our guide pointed out that all the Minuteman II missiles were removed from South Dakota but that there are Minuteman III missiles all across the upper Great Plains. There are around 450 of these missiles and they are capable of putting a missile in your desk drawer. The accuracy of the new generation is vastly improved.

OK, it’s back to me again: After Rick returned from his tour of the control center, we jumped in the car and drove eleven miles to the Delta-09 site, which is where the actual missile is, although this one is deactivated and only there for educational purposes. There was a volunteer on hand to answer questions. This man was a retired lieutenant colonel and had served at this site. It was fascinating to hear his first-hand account of working there. However, if no one is there, you can call a phone number and get an audio tour of nine or ten marked spots. We listened to it and thought it was quite interesting. Here is the phone number if you want to listen: (605) 301-3006. 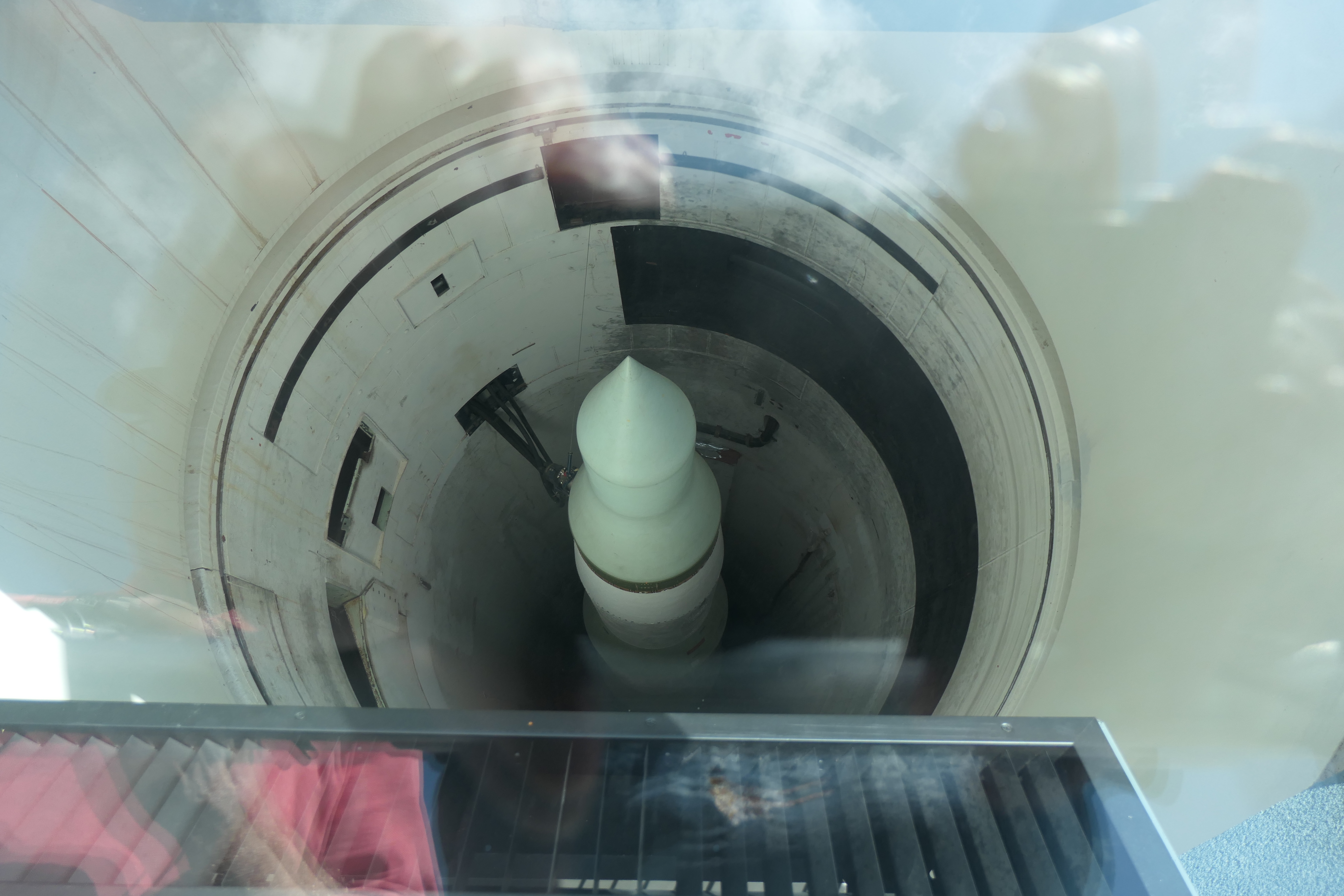 Looking down into the silo of the deactivated missile.

The Minuteman II Missile National Historic Site turned out to be an exceptional experience. The US National Parks are a gift from our ancestors which we will give to our children and grandchildren. Even as this trip comes to an end, we are already trying to decide which parks to visit next. So many incredible choices; this is truly the United States of Awesome!