What’s Up With That Flag? 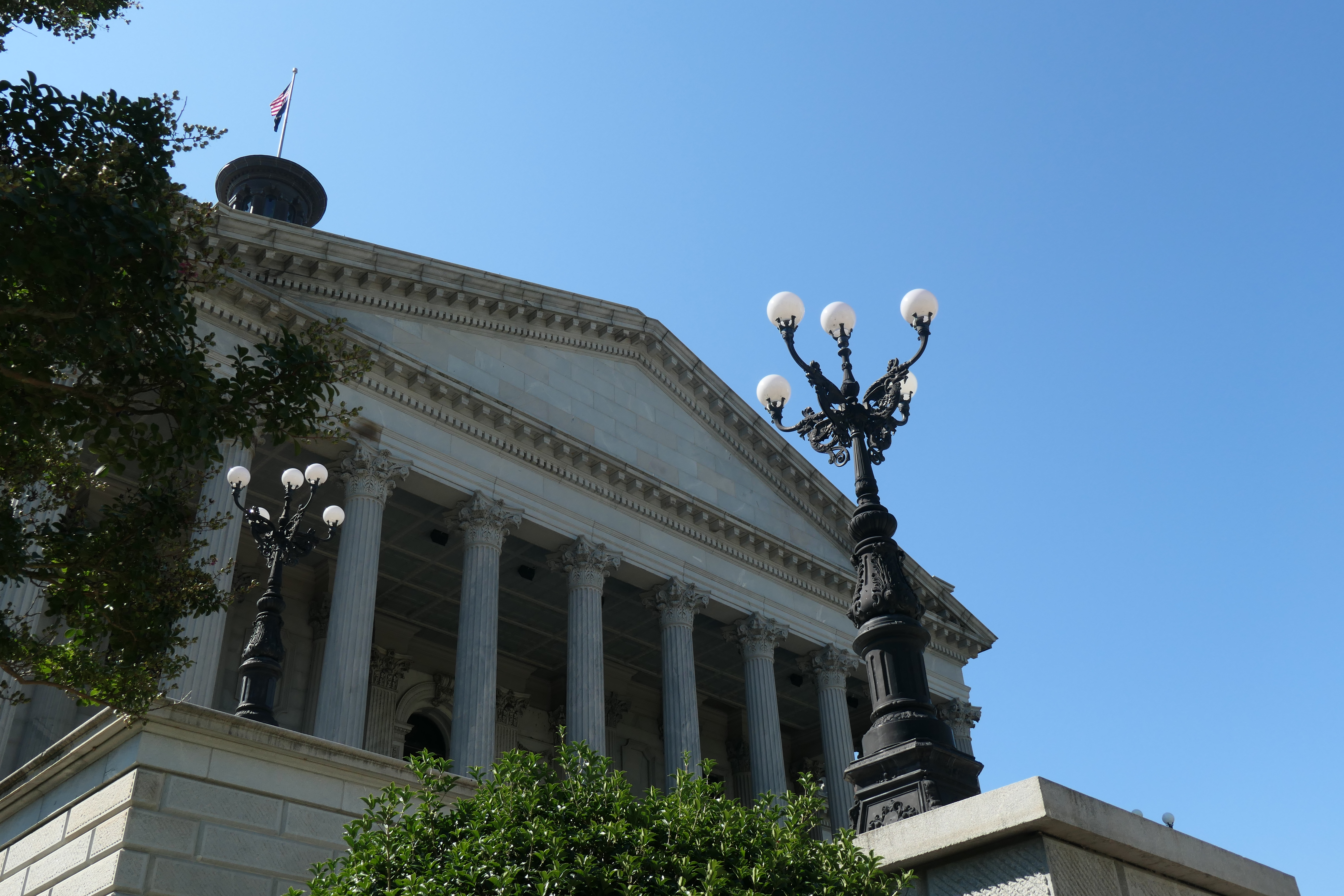 We were under a mandatory hurricane evacuation last week, but that had absolutely nothing to do with why we left home. Grandparenting duties called, and we drove away from the calm along the coast and the “cone of uncertainty” toward the maelstrom that is life with three little guys age four and under. Thankfully, their daycare was not affected by the weather and they were in their classrooms at 7:30 sharp every morning.

One morning, we decided to visit the South Carolina State House. Logan was with us and he thinks he has been on the grounds, but not sure he has been inside the building. Both of us have been at least once in our past, but decided it was time to take a fresh look now that we have seen a respectable number of other state houses. We thought those experiences would give us a different perspective. Unfortunately or fortunately, depending on your point of view, it has changed our perspective. We would like to say that our very own state house is the most beautiful, but we don’t want to lie. It’s not; not by a long shot. Oh, well. Can’t win them all, now can you? At least we have the most beautiful state flag. It’s an indisputable fact.

However, it turns out that other facts regarding the flag are disputable. It just so happens that the crescent in the upper left corner is thought to represent a Carolina crescent moon by pretty much no one except us. We were shocked. You could have knocked us over with a feather. Exactly what that crescent is supposed to represent continues to be a source of debate. I will simply lay out the facts and let you decide for yourself.

We were surprised to find out that this debate has been raging forever. In 1775, the Moultrie Flag was designed for the South Carolina troops to use during the Revolutionary War. The soldiers wore blue uniforms and caps with a silver crescent adorning them, so Colonel William Moultrie thought it appropriate to use the symbol on the flag for the purpose of signaling the troops. The word “liberty” was written on the crescent shape and that is all that was on the blue flag. When the state adopted the flag in 1861, the palmetto was added and the crescent symbol, sans the word “liberty,” was used to represent the silver emblem that adorned those caps and the color blue was chosen to represent the color of those Revolutionary War uniforms. (I always thought that the color was more indigo and represented the indigo crop that flourished along the coast, but I don’t want to stir that pot, so we will just go with the blue uniform theory.) The soldiers were seen as incredibly brave and the flag was a way to pay tribute to their bravery.

Sounds like that’s all settled, right? Not so fast. This is South Carolina and we never let something go that easily. There is another faction of historians who hold fast to the concept that the crescent represents the gorget that was worn by officers in battle. A gorget is a piece of armor that is crescent-shaped and worn to protect the throat. It is also suggested that the crescent on the caps of those soldiers during the Revolutionary War was a tribute to the days of wearing body armor. If this is true, then yes, the crescent on the Moultrie Flag and on the soldiers’ caps has its origins in the gorget. 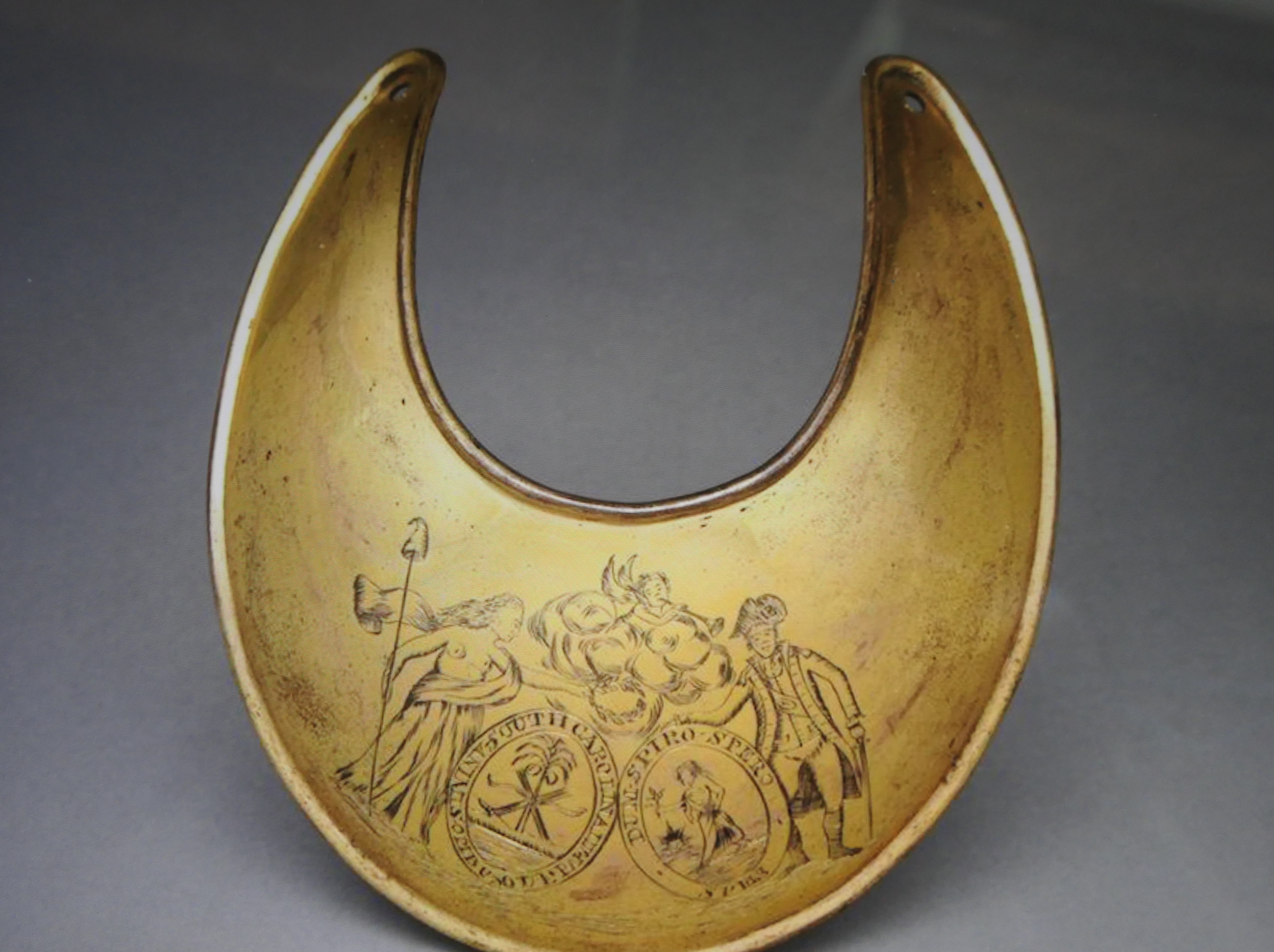 The French coined the term “gorget” for the metal crescent that served as neck protection for officers in battle.

It seems that historians have scoured through all the books, letters, and papers that are in any way related to the flag, but there is no definitive answer to the crescent controversy. It’s up to you to come to your own conclusion. Me? I’m sticking with the moon concept. I’m not going to worry about all the fussing and fighting over an incredibly beautiful flag. There’s nothing like gazing at a Carolina moon on a hot summer night with a little breeze blowing off the creek. 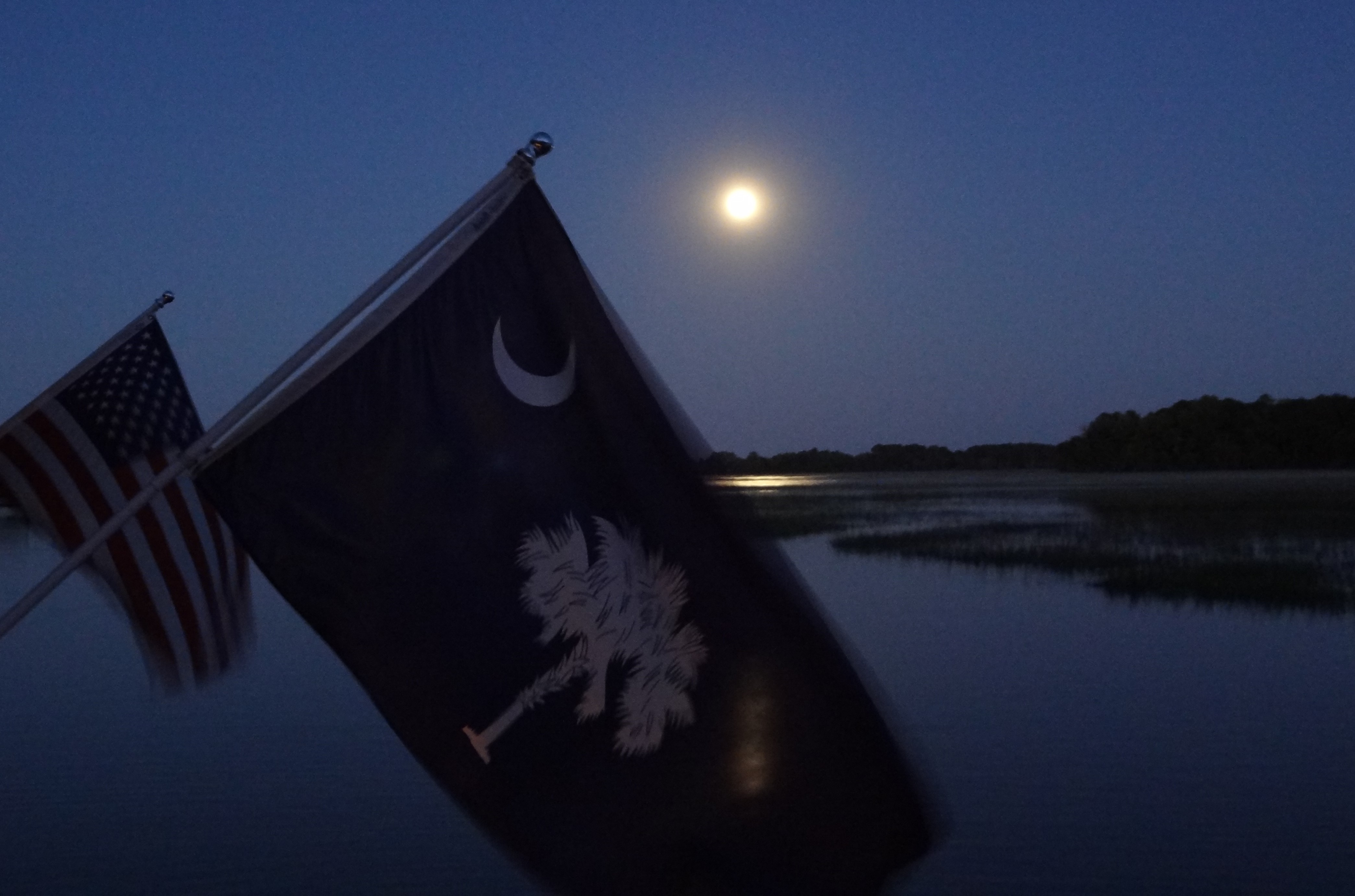