The Brooklyn Bridge, Jumbo, and DUMBO 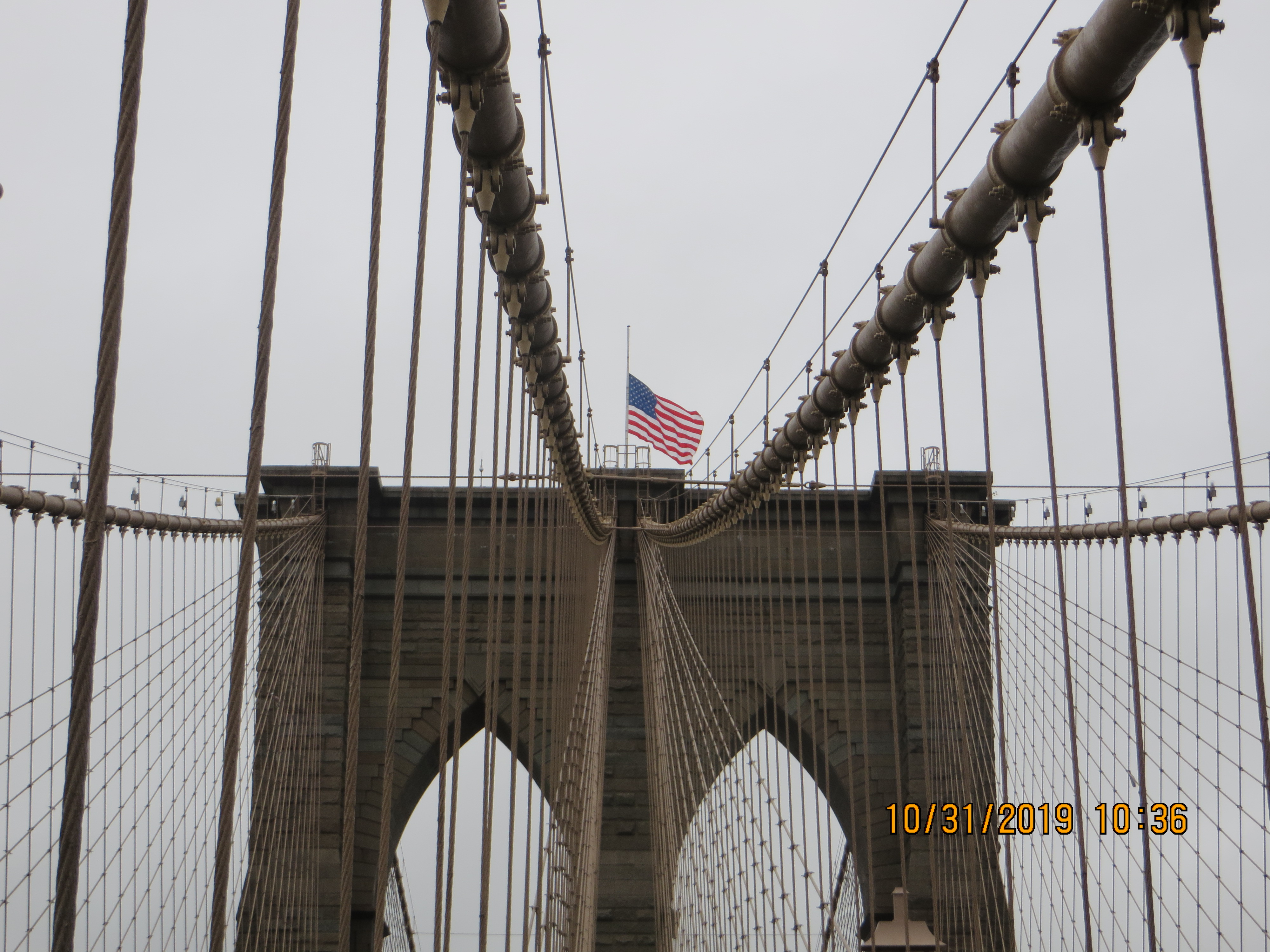 We never let a little rain keep us from a tour, especially when we’ve already paid. Yesterday was no exception, although it was coming down pretty hard at times. And the wind was blowing, which made the morning walk across the bridge even more “delightful.” We were scheduled for a walking tour of the Brooklyn Bridge at 9 am, so we jumped on the downtown train and hightailed it to lower Manhattan to meet our guide. Kent (name changed mostly to protect us, not him) was a super nice guy and extraordinarily affable and engaging. He was about our age, but he referred to us as Logan’s parents instead of grandparents, instantly upping the tip potential by factors I cannot even begin to compute. He professed to have a PhD, to having taught history at a local college, and to have written numerous articles and books, but we immediately recognized his enormous talent as a conspiracy theorist. Rick quickly challenged him, calling his assertions “theories.” He vehemently disagreed and said, “These are not theories; these are indisputable facts.” Within five minutes of shaking our hands, Kent had explained how Building #7 of the World Trade complex came down late in the afternoon of September 11, 2001 because it was already rigged with explosives and the plan was for it to come down after being hit by United Flight #93. But the plan was interrupted by the passengers on Flight #93 and it went down in a field in Shanksville, PA, foiling the plan for it to hit World Trade Center Building #7.  However, it was already filled with those explosives to facilitate its collapse, so it had to come down anyway. All those buildings had to go, according to Kent. They were full of asbestos and no one would rent them. Kent said some guy named Silverstein decreed it and set the plan in motion. Kent regularly veered into tinfoil-hat territory, but nonetheless it was fascinating to hear his take on all manner of New York related events and catastrophes. Did I mention that Mossad took down the World Trade Center? Oh, wait, I thought it was that Silverstein guy. Anyway, Kent assured us that everyone in New York was simpatico. Just us rubes in the hinterland are way behind on all this stuff. Oh, yes, I almost forgot to mention that Kent pointed out buildings of interest along our walk such as the Metropolitan Correctional Center. He explained that this is where Julian Epstein was murdered (he’s probably right about this) and El Chapo was tortured until he lost his mind.

But enough about our guide. My reason for sharing all that is merely to give you a “heads up” should you cross paths with our friend, Kent. If you do, I can assure you that you will be in for a stimulating conversation on all manner of topics. You will need a roll of aluminum foil to get on the same wavelength. Now let’s get back to the tour. The plan of the tour was to walk across the famous and fabulous Brooklyn Bridge and learn about its construction and also about Brooklyn in general and the area known as DUMBO. At one time, the Brooklyn Bridge was the tallest structure in the world. It is a neo-gothic gem and it is an iconic New York landmark. You’ve seen it in art and also in movies and television programs. The story of its construction is fascinating from numerous standpoints.  One of the most interesting stories to me is about “caisson sickness.” The men who worked to dig down to the bedrock on the Manhattan side had to go down to dangerous depths in a structure called a caisson. (It sounds like a big sealed box with compressed air pumped into it.) They became ill from the effects of the pressure as they rose to the surface too quickly. No one had identified decompression sickness before, so to them, this was a new malady. Most people now just refer to it as the “bends.” Actually, the original engineer who designed the bridge died of tetanus before construction began. His son, Washington Roebling, took over, but became incapacitated with the bends from going down in the caisson and had to supervise from his bed with binoculars. His wife, Emily Roebling, communicated his instructions to the engineers on the project. Emily ended up being the first person to cross the bridge and she did so carrying a rooster in an open carriage on May 24, 1883. In 1884, not too long after it opened, people got spooked and began to worry that it was not safe. To make a big show of how much weight the bridge could support, P. T. Barnum paraded Jumbo and twenty other elephants across the bridge. Oh, what a time to be alive!

No only was the Brooklyn Bridge the tallest structure in the world when it was completed, but it was also the longest suspension bridge in the world. It spans the East River and connects two of New York’s great boroughs, Manhattan and Brooklyn. At the time of its construction, Brooklyn was pretty much farmland and supplied food to the residents of Manhattan. Originally, the bridge carried rail traffic along with horse-drawn carriages on the lower sections, with pedestrians and bicycles traversing the river on the elevated walkway above. Bikes and walkers still use the upper span. An estimated 4000 people walk across the bridge every day and 2600 bikers make the trip daily. Vehicular travel on the lower levels is estimated to be at around 125,000 per day. No commercial vehicles are allowed to use the bridge. It was originally called the East River Bridge and was not officially called the Brooklyn Bridge until 1915.

Like much of Brooklyn, DUMBO has been through periods of decline and renaissance, and presently it is a very hip part of New York. The area known as Down Under the Manhattan Bridge Overpass is chock full of shops and restaurants and is enjoying its time in the sun, metaphorically speaking, although there was certainly no actual sun yesterday. By the way, the Williamsburg Bridge, just upstream from the Brooklyn Bridge, stole the title as the longest suspension bridge when it opened in 1903. Still, the Williamsburg Bridge is nothing like as beautiful as the Brooklyn Bridge. I do believe that this is the first bridge tour we have ever taken, and we have taken alot of tours. It was such an interesting slice of history made even more delicious by our guide’s spiced up take on life in New York. 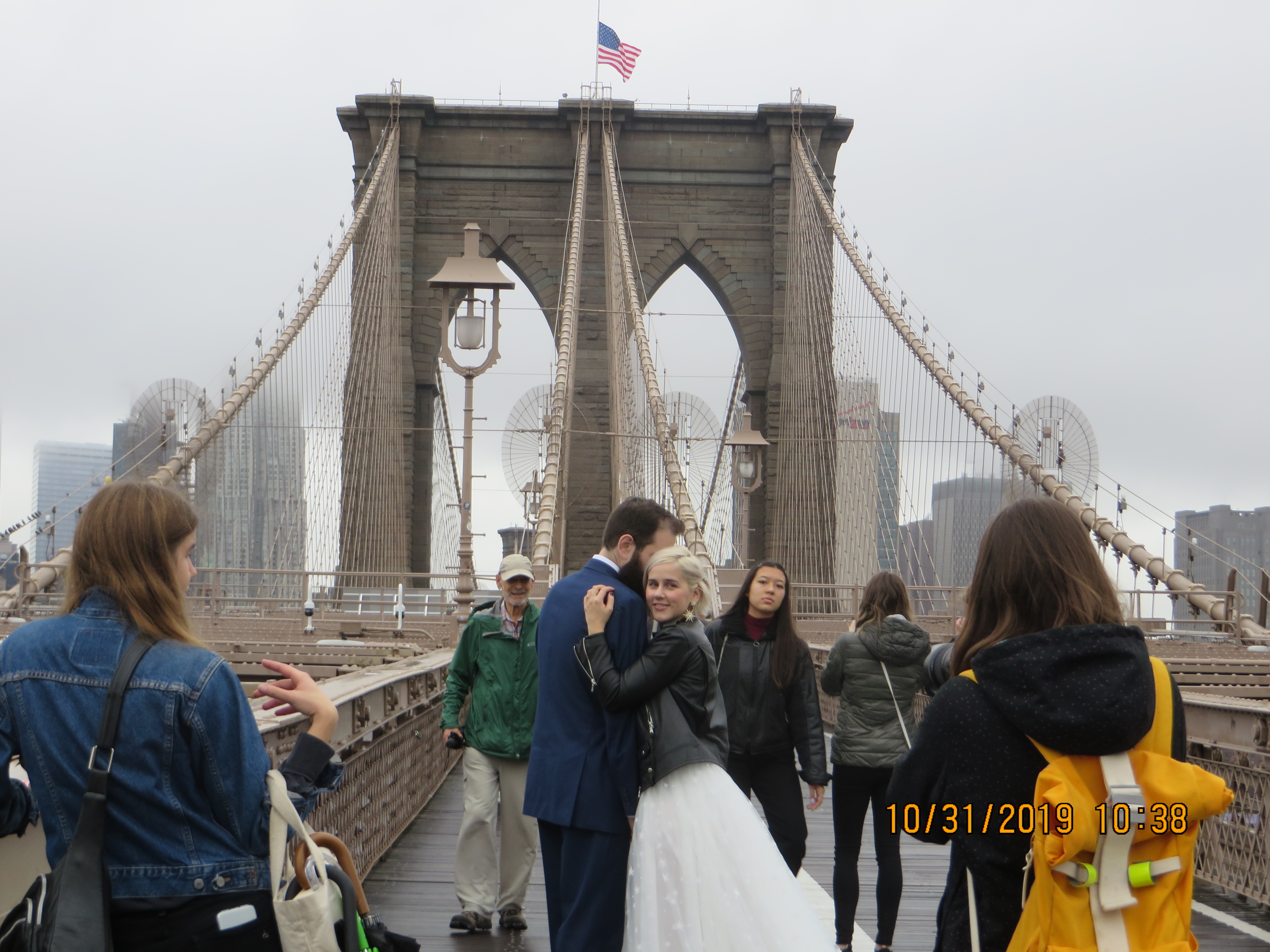 Who’s up for a wet wedding on the Brooklyn Bridge? 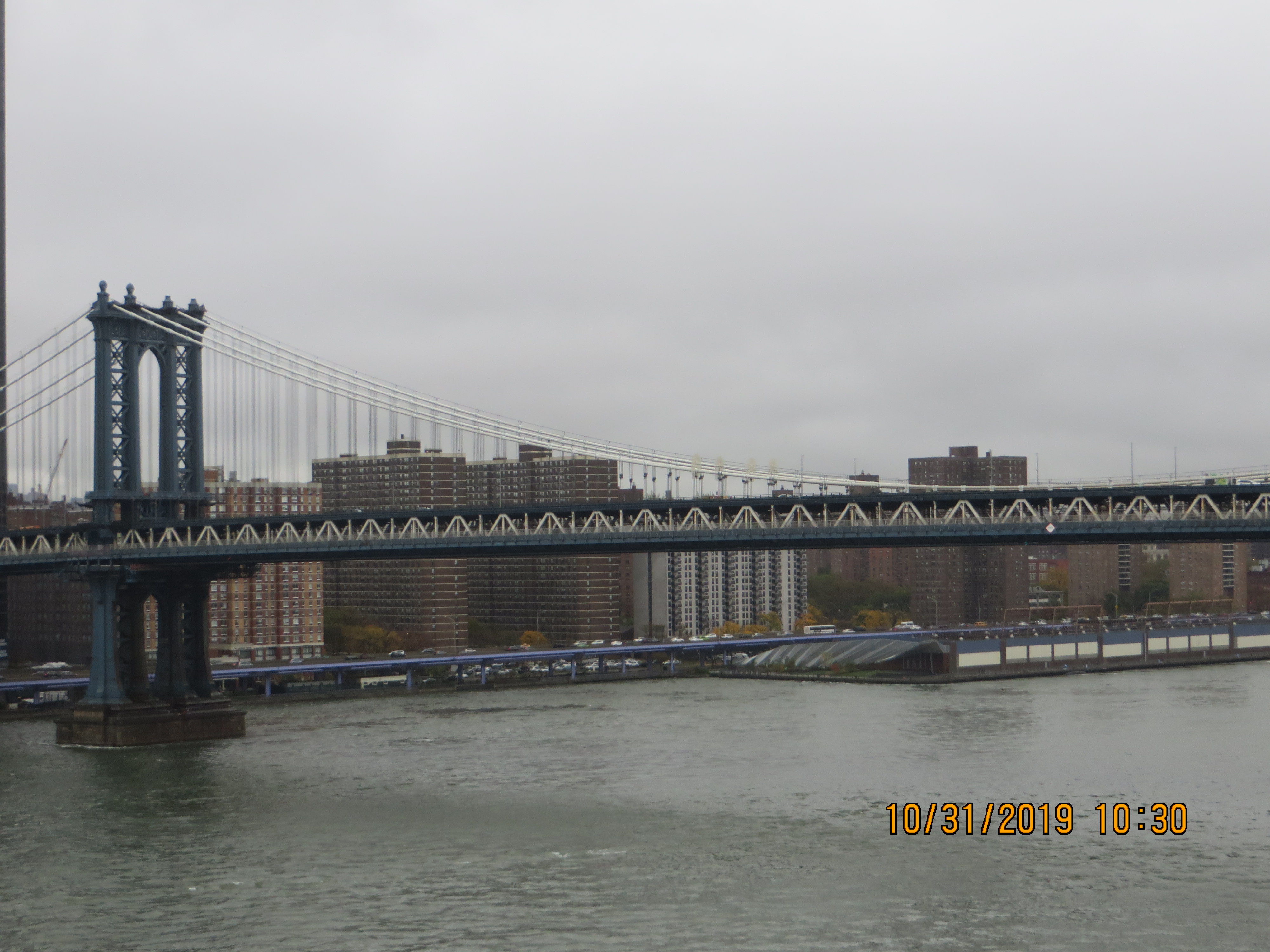 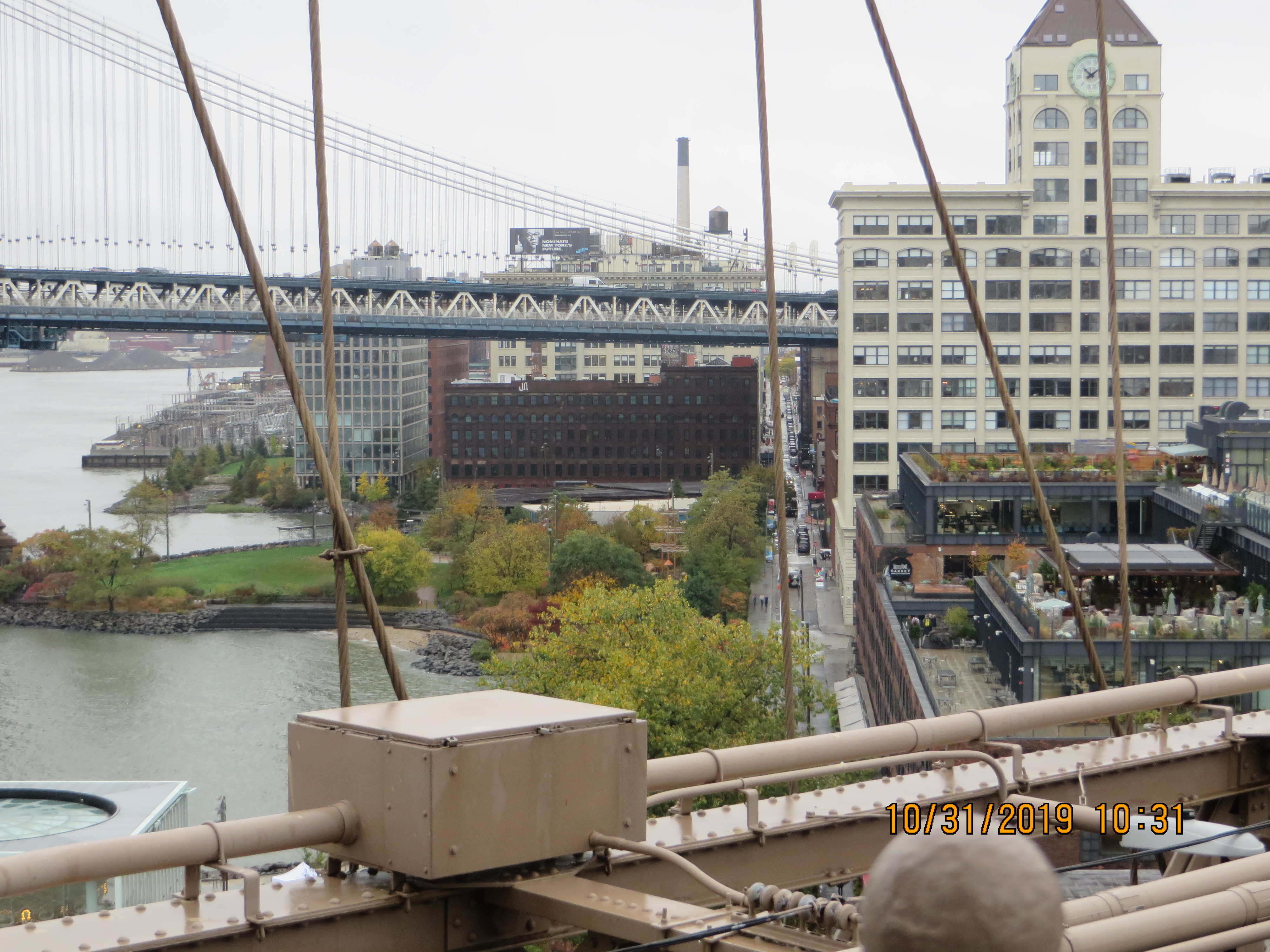 A glimpse of the DUMBO area from the elevated walkway of the bridge. 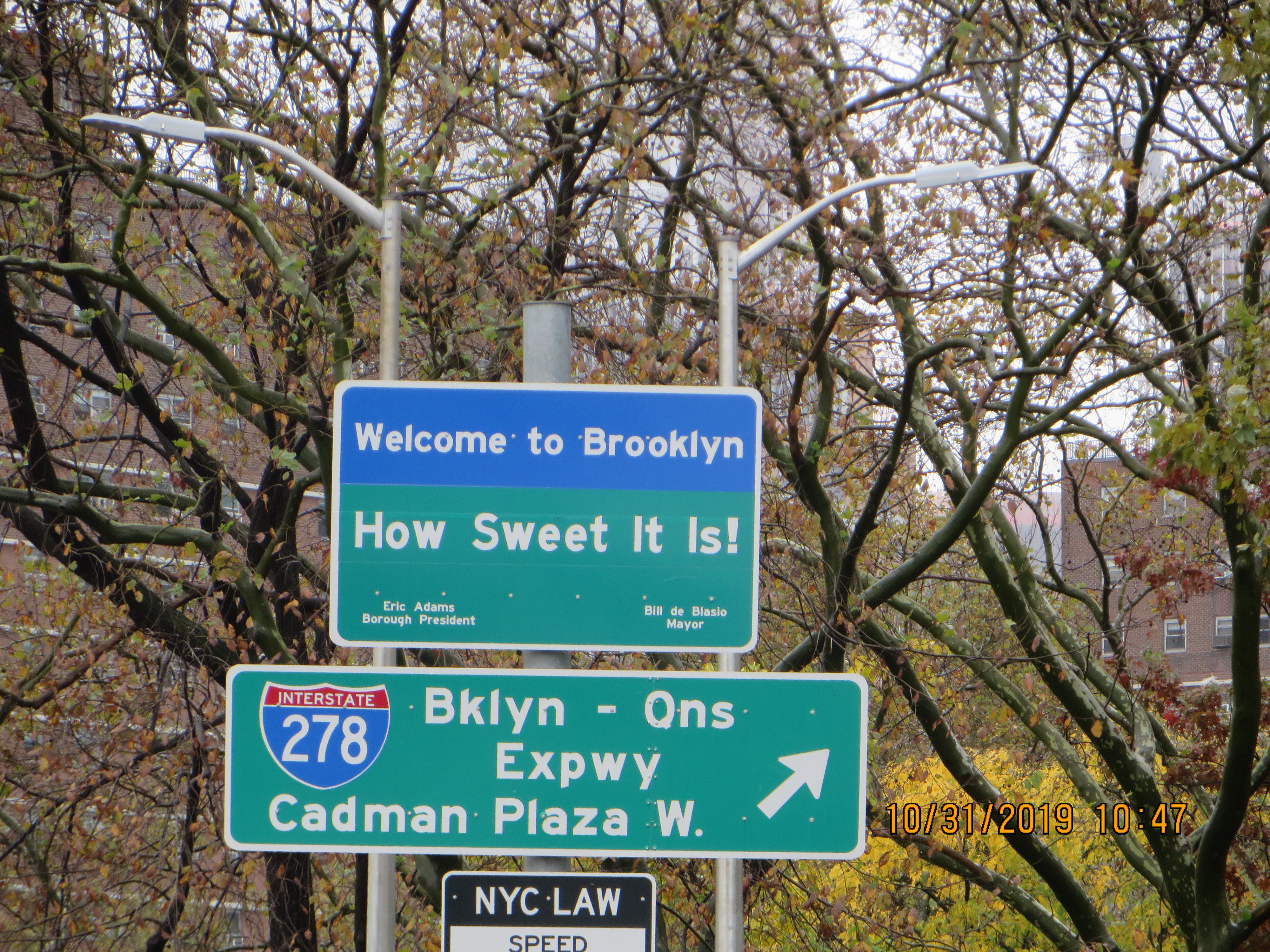 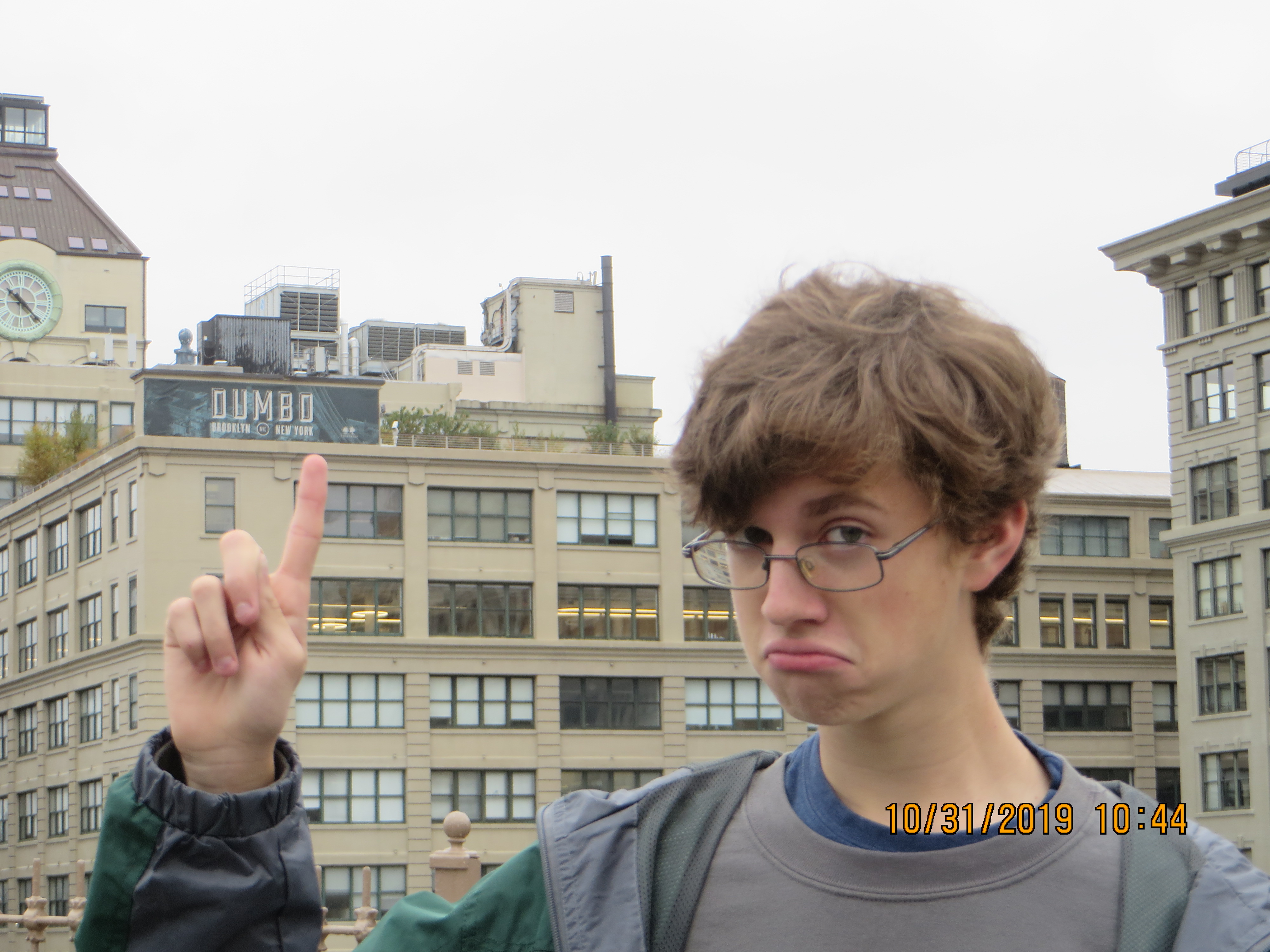