The Comedians of Morocco

Morocco is full of wonders and we are fortunate to have Abdul showing us his magnificent country. Sometimes when we make a stop at a historical site or workshop of craftsmen, a local guide steps in to explain the minute details so that we leave with a better understanding of the archeological site or of the skill set employed by the craftsmen. Often, this is not an option; it is required by local regulations. This was the case yesterday when we stopped at Volubulis, the ruins of a Roman city built around the second century AD. The city was abandoned at some point in time. The Lisbon earthquake of 1755 destroyed the structures and it was covered in ash and rubble until the French rediscovered it and began excavation around 1915. Only about thirty percent of the city has been excavated, but what is there is a testament to the brilliance of the Romans. Believe it or not, they actually had hot and cold running water, the hot water being brought in from hot springs. Our guide knew the site like the back of his hand and his wit made the story anything but dry. We spent about forty five minutes laughing and learning. Don’t know much about comedy in Morocco, but I think the tour guides in Morocco beat anyone on late night television in the US. 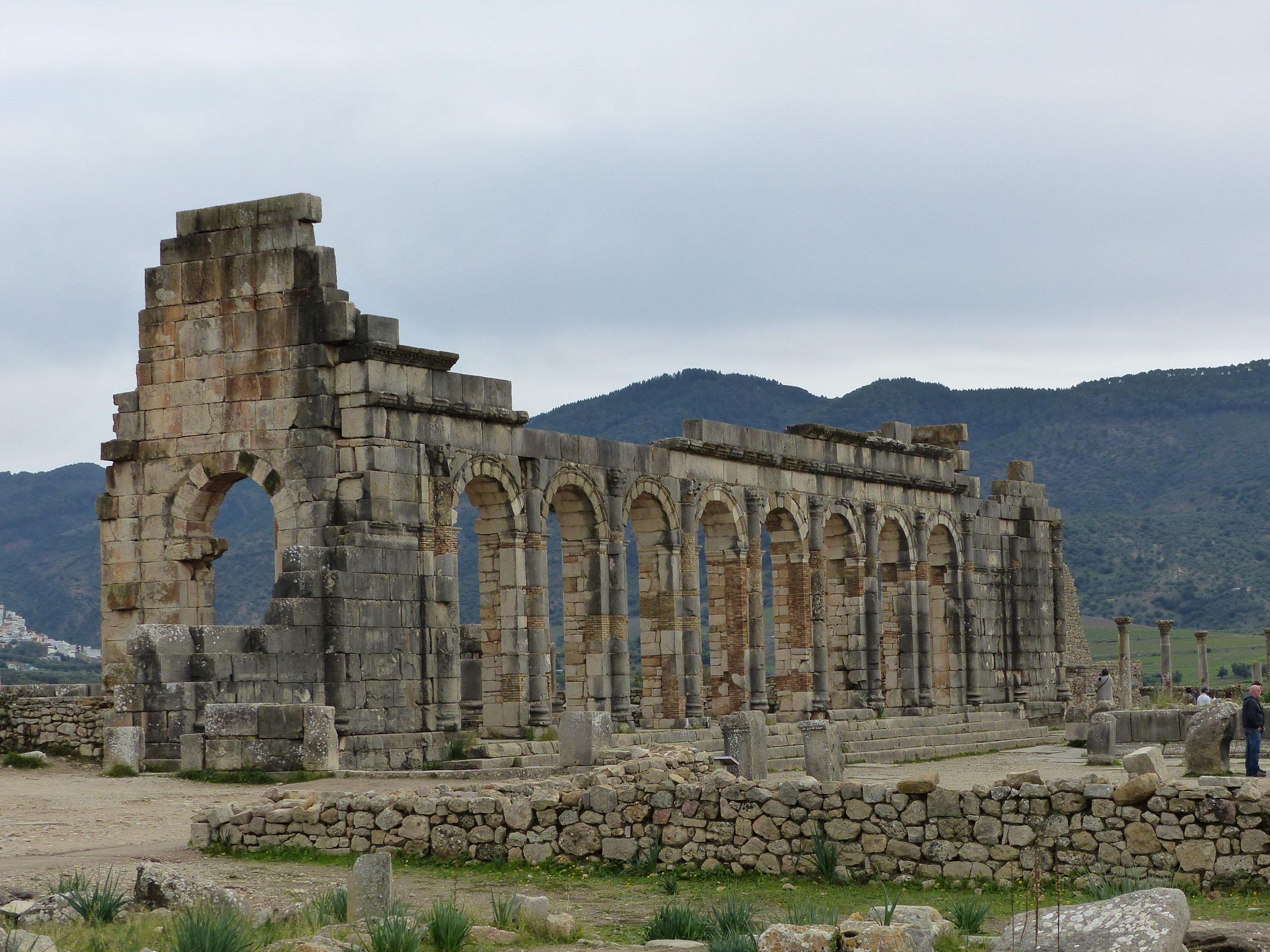 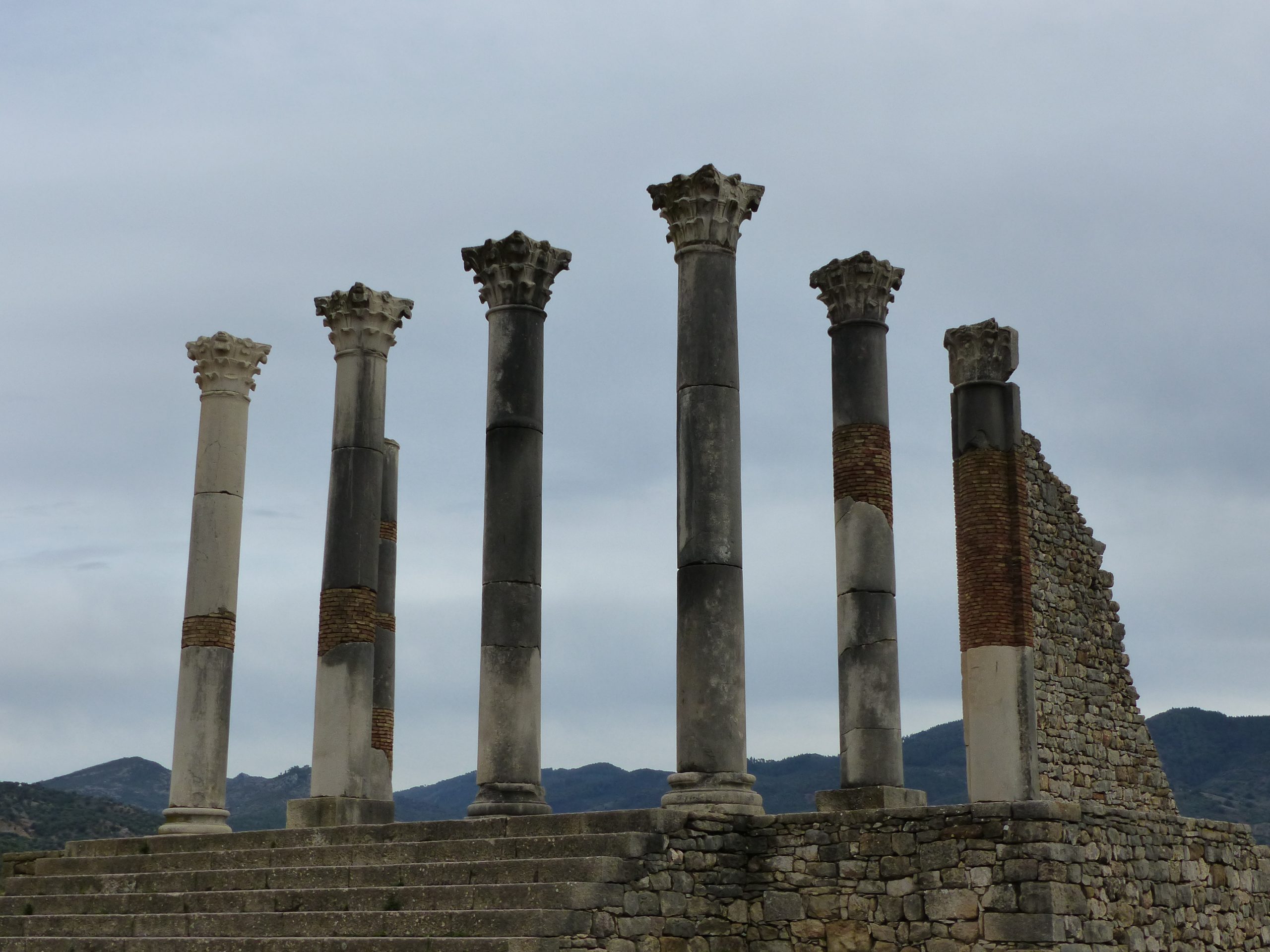 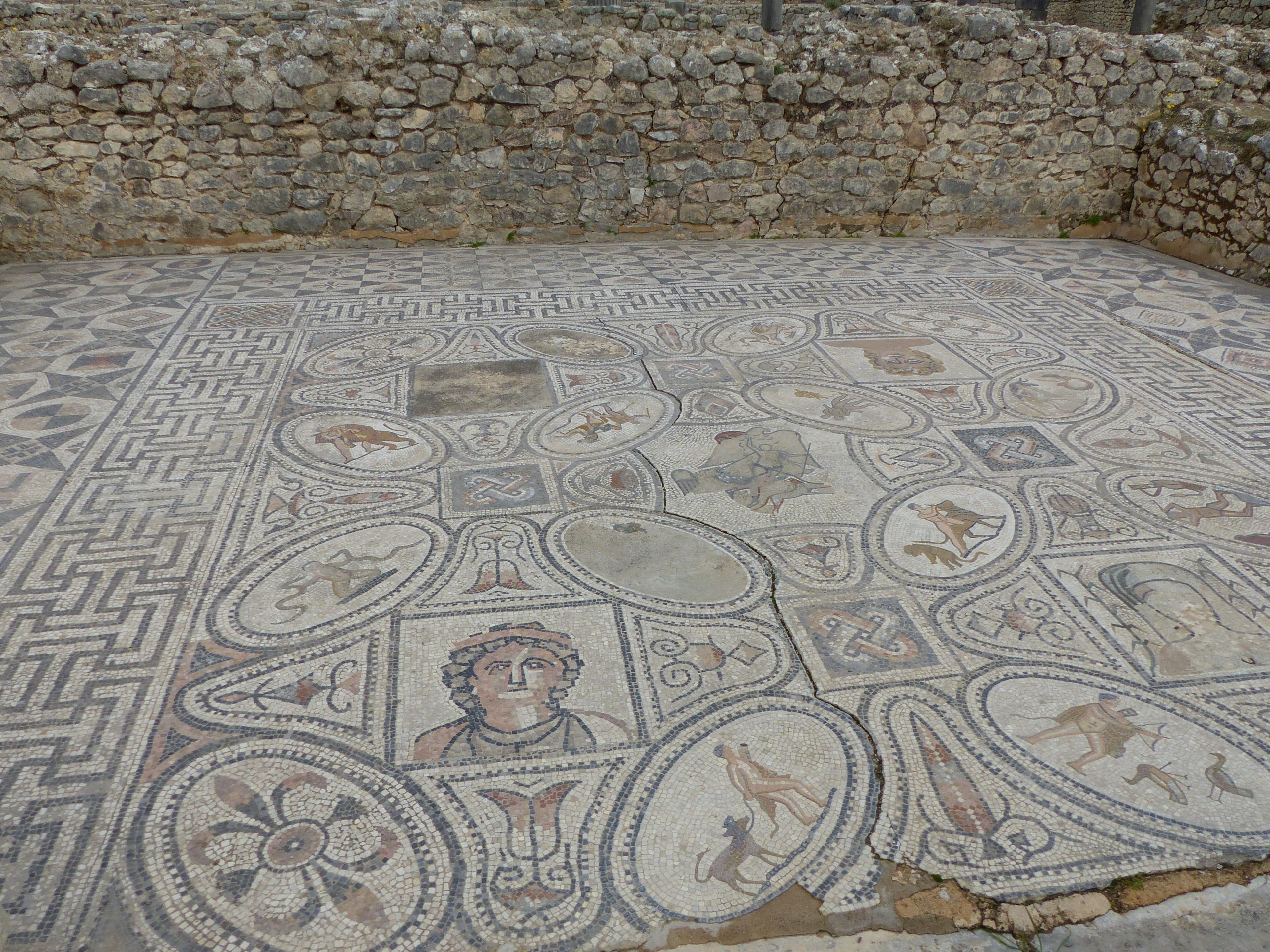 Beautiful mosaics covering the floor of the home of a wealthy resident of Volubulis.

Today we toured the historic medina of Fes. The medina is the old city, dating back to to around 800 AD. To be a medina, four core components must be present. There must be a public bakery, a mosque, a hammam (basically, that’s a spa), and a fountain. There are many passageways that are only wide enough for one person to pass through. Donkeys are primarily the beasts of burden in the medina because many passageways are too narrow for carts. There are many souks selling everything from vegetables to clothes to appliances. There are live rabbits and ducks, so if you like your dinner fresh, you need to shop here. We visited a carpet souk and learned a lot about Moroccan rugs from the nice man who would have loved to sell us a carpet. Didn’t happen. However, we did visit a bakery and the baker was proud to show off his cookies. Rick bought a box, of course. This medina is so huge that Abdul enlisted the assistance of a fellow named Ahmed to accompany us. Abdul said he has been taking people through the medina for over ten years and still has no confidence that he can find his way out, but it was crazy how well Ahmed knew his way around. 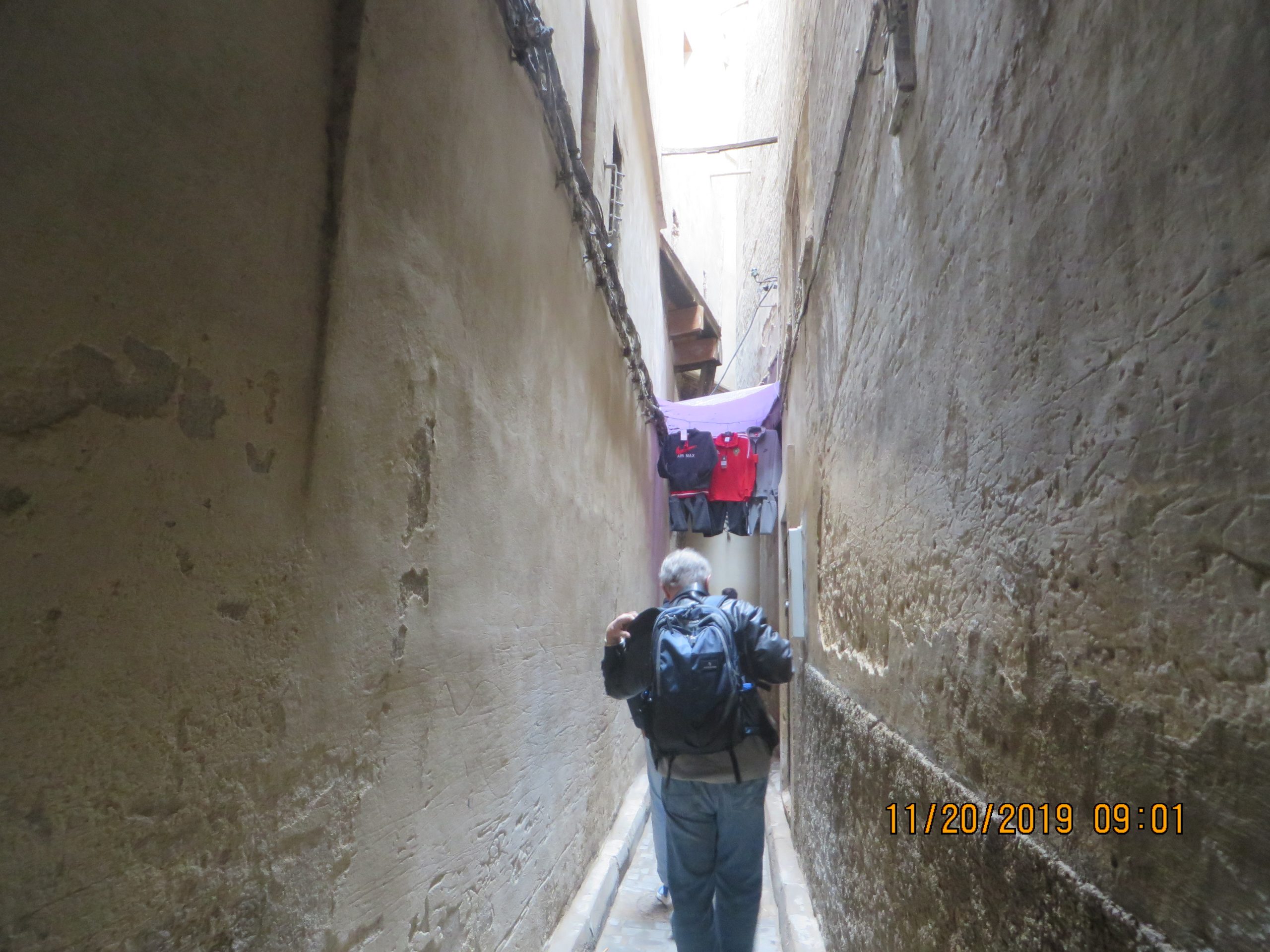 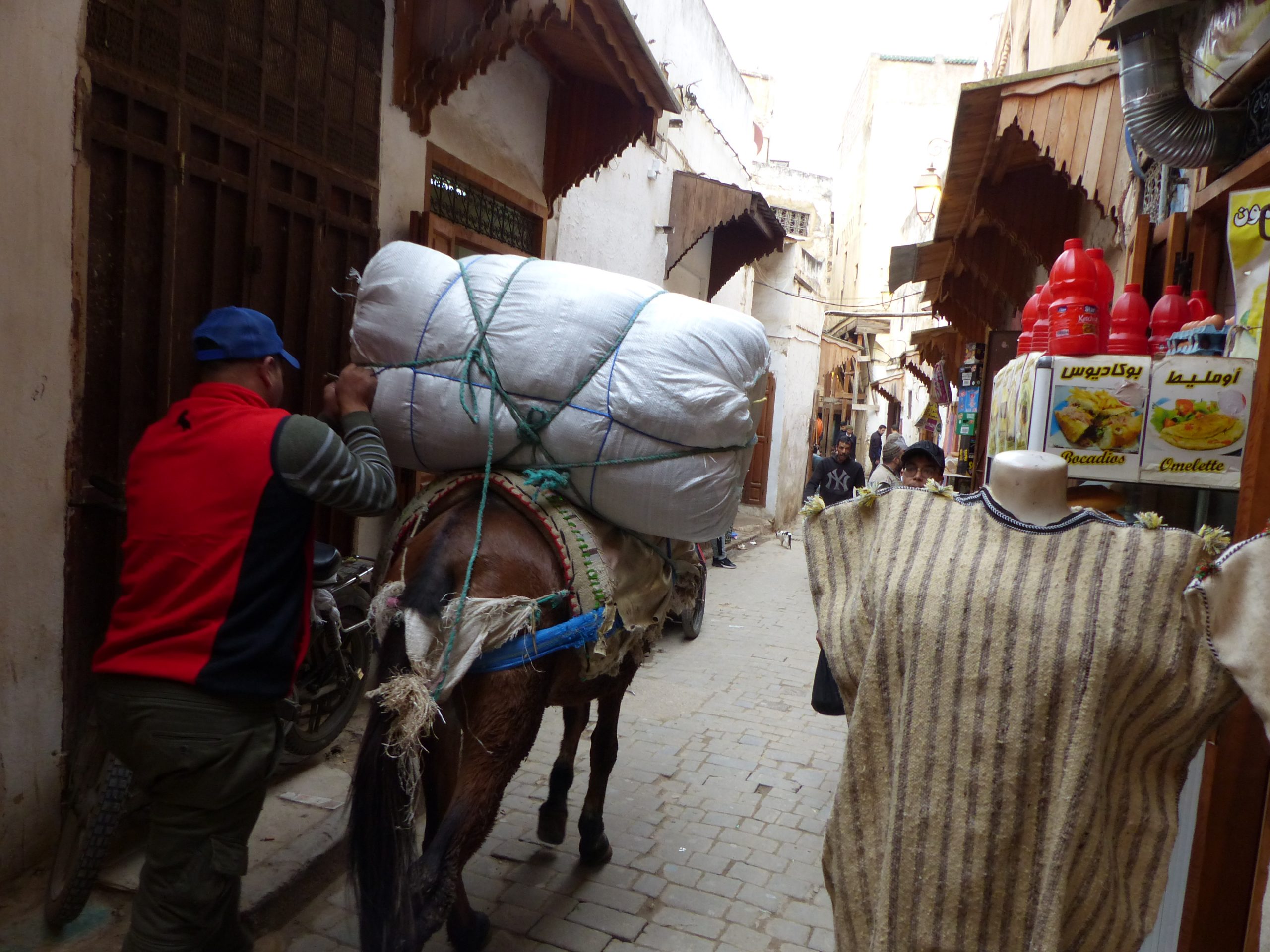 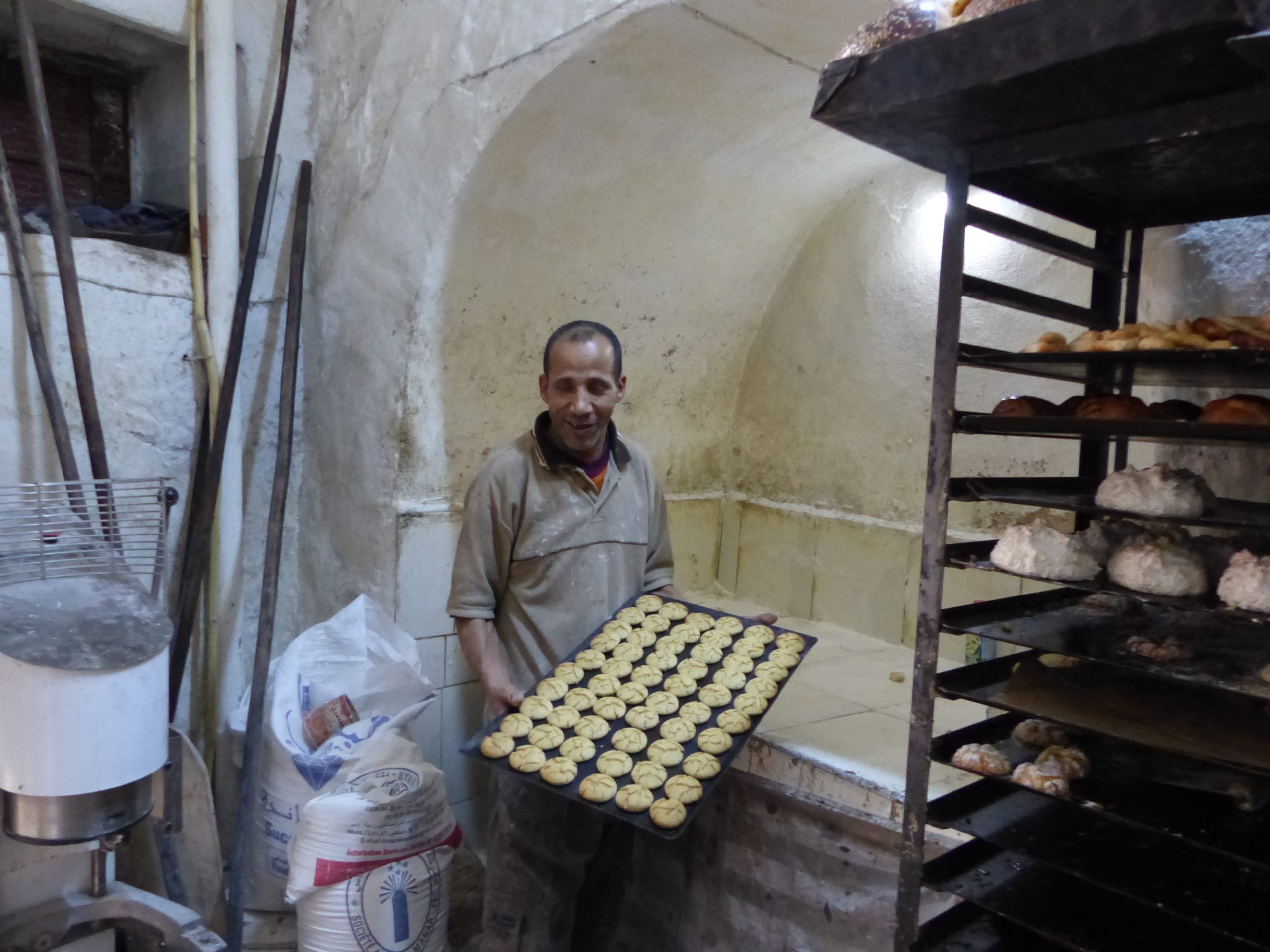 The medina of Fes is also home to the Chouara Tanneries. Leather goods are made here from the hides of camels, goats, cows, and lamb, and the skill is passed from father to son. They use natural dyes, obtaining the colors from sources such as indigo. The dyed skins are carted by donkey up the hill to dry in the sun. Our guide at the tannery was not only a good salesman even with his broken English (he sold us a pouf made from camel skin), but he kept us in stitches the entire time we were there. (No pun intended.) Before we climbed the stairs  up to the balcony to take a look at the huge vats used for tanning the hides, he gave each of us a big spring of mint, calling it a “gas mask” because the smell of the skins going through the process can be quite pungent at times. They use pigeon poop in one of the steps because, for one thing, it works with the other ingredients to remove the wool or hair from the hide. These vats are huge and it is hard to imagine having to mix up this concoction. Rick was naturally curious about the process and asked where they got so much pigeon poop. I am guessing that our guide has fielded that question before because he did not pause for even a single second before he replied, in perfect English, “From pigeon ass.” 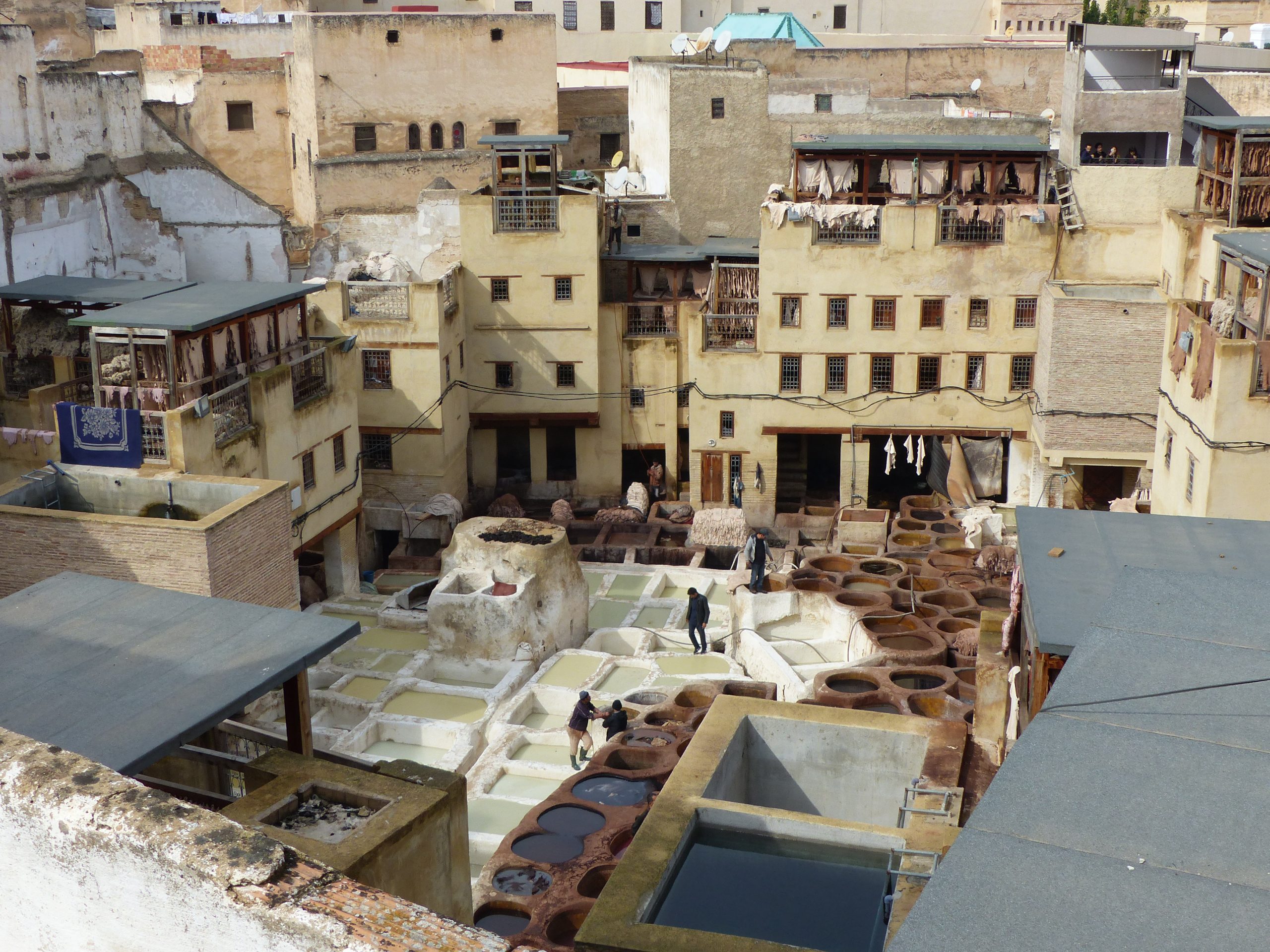 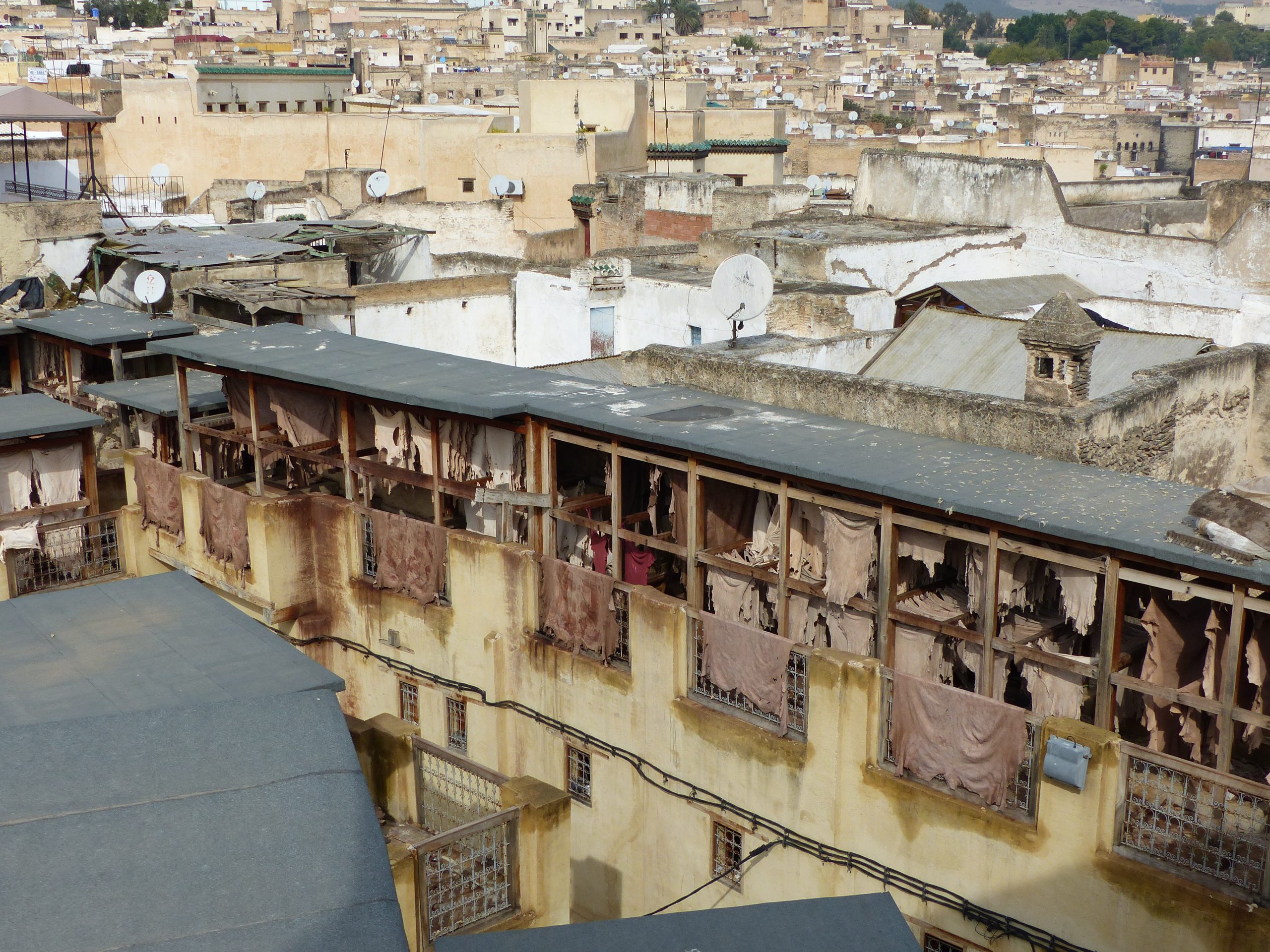 Pictures from the tannery.