”When money flows into the hands of women, everything changes.” — Melinda Gates

Less than two weeks ago, I was standing in Jayne’s kitchen trying to decide on a coffee mug. Since Jayne and I co-grandmother (I made up that term), we have similar, if not identical mugs. I call them the “mug mugs;” they are emblazoned with pictures of the most adorable little boys’ faces. I really had not planned to have another cup of coffee at Jayne’s Sunday brunch, but the aroma was incredible. Since, according to Dr. Lawson, research in the field of gastroenterology is pointing to coffee consumption as very helpful in warding off liver disease, I say “drink up!” Mary Jo, Jayne’s sister, stopped at the coffee pot to ask me about our upcoming trip to Morocco. She told me about a beautiful necklace and scarf that a friend recently brought home from Morocco and promised to text me the information. True to her word, the text came in later that evening. The following morning, I emailed Michael Diamond, the wonderkind who planned this phenomenal adventure, and within a few hours, he had a pin stuck in the town of Sefrou on the map of our route through Morocco. Let’s just say it was serendipity fueled by caffeine.

Sefrou is a town at the base of the Middle Atlas Mountains a short distance from Fes. (OK, class – here is today’s lesson: Fes is a city; fez is a hat.) There is a spring near a Sefrou from which comes water that is said to cure insanity. We did not stop there, but we probably should have. Nor did we come for the annual cherry festival, which will celebrate its one hundredth birthday next year. Finally, something older than me. But we came to visit the Cherry Buttons Cooperative shop. That is where Mary Jo’s friend found the wonderful necklace and scarves. The wares displayed in the shop are indeed beautiful and I left them scrambling to restock their shelves. But it is the story of the cooperative that is truly awesome.

At one time, Sefrou had a large population of Jewish residents. They introduced button-making to the women of Sefrou. These buttons are not the plastic kind we are familiar with. They are hand woven and are used to adorn the djellabas that Moroccans wear. Button-making became popular because it required minimal supplies and could be done at home in a woman’s spare time to supplement the family income. The Sefrou region became renowned for the superior quality of their buttons. A Moroccan homemaker named Amina Yabis watched as the women of Sefrou sold their buttons to middlemen who turned around and sold them for many times what the women were paid. She said, “Enough!” With the support of her husband and family, Amina spearheaded the formation of an association which led to the cooperative. The cooperative was able to tap into government as well as nongovernmental resources. Although the immediate reward for their efforts is financial, that is far from the only dividend. The women have gained not only new handicraft skills such as weaving, but also business skills and the self confidence to use those skills to market their products. The ladies also came up with new ways to use the buttons, which is why they now have scarves, necklaces, earrings, and more  to sell.

The Cherry Button Cooperative also works with the Ibu Foundation. (Say “ee-boo”) This foundation partners with over one hundred cooperatives in more than thirty eight countries to give women the tools they need to maximize their potential. With assistance from Ibu, women can use the beloved and time-honored crafts of their cultures to be all that they can be. In so many impoverished countries, women are an untapped resource, but with a little help, they can become empowered to control their destiny and improve their lives as well as the lives of their children.

Our van pulled up to the curb outside the cooperative and Amina was there to meet us. Whether or not Tofik, our driver, needed help parking was of no concern to her. She was going to help anyway. She is a “take charge” kind of woman yet so approachable and warm. She sat me down and demonstrated making one of the buttons. Amina told us all about the cooperative and about the Ibu Foundation. She showed us pictures from her trips abroad that have resulted from her work with the cooperative. Then she jumped into the front passenger seat of our van and directed Tofik all over Sefrou to show us various projects of the cooperative to teach women skills such as cooking and machine sewing as well as various artistic needlework skills done by hand. She showed us a computer lab where women are taught  computer skills. It was obvious that she is a role model for so many women in Sefrou and is very dear to the ladies of the town. It was an incredible serendipitous opportunity to make a personal connection with women with whom we have little in common other than our human hearts. It was so touching how they thanked us for coming and for taking an interest in them.

Amina demonstrated how to make a simple button.

Amina loves to tell the story of the Cherry Buttons Cooperative. 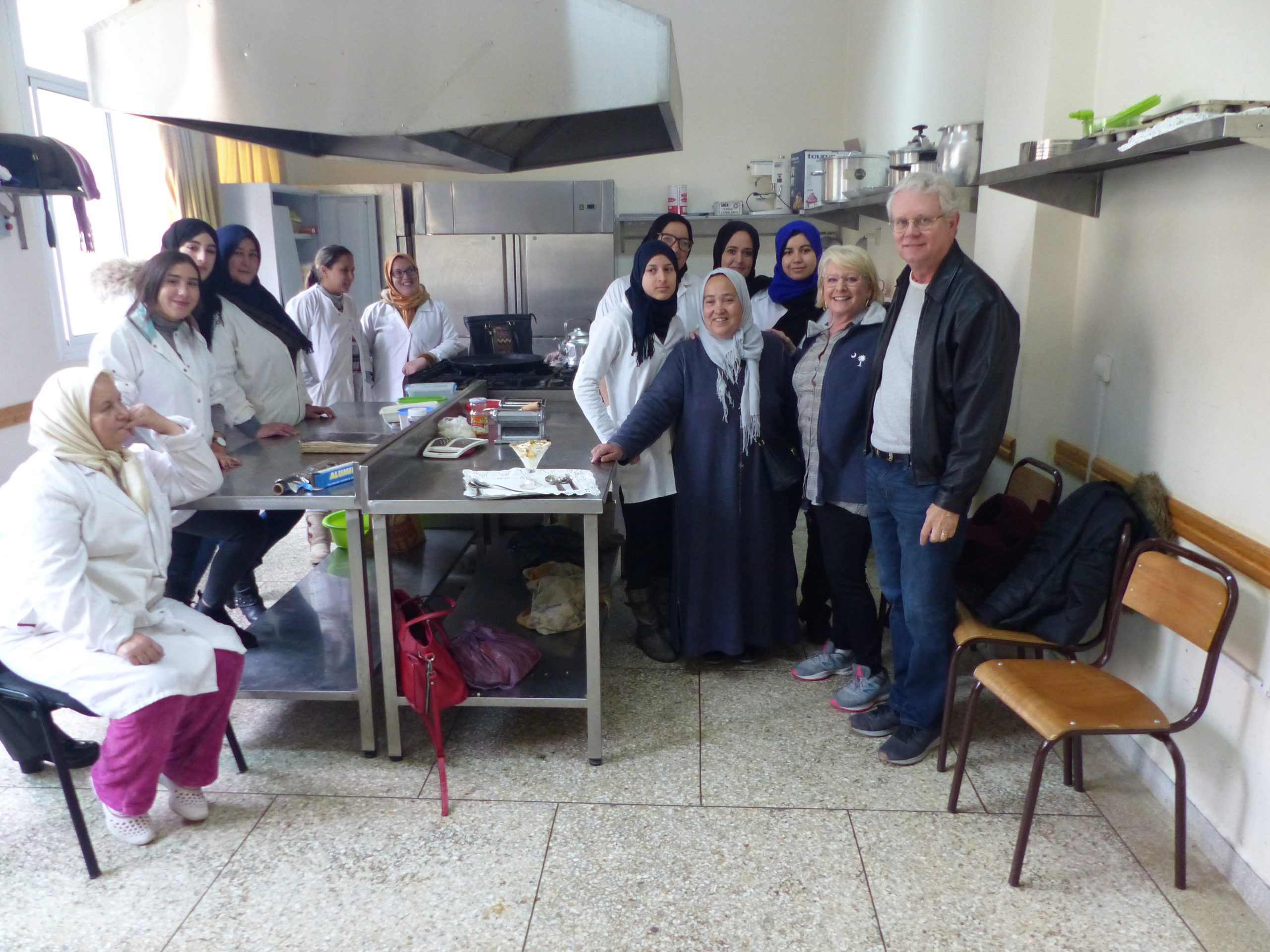 The ladies in the cooking group wanted us to take a picture of the group with us.

And here is where the serendipity continues to delight and amaze me. The executive director of the Ibu Foundation is a young lady from South Carolina. The foundation has a flagship boutique that sells incredibly beautiful handmade items from cooperatives around the world and uses the income to continue the work of its mission to empower women. This story goes around the world and comes back home because the flagship store of the Ibu Foundation is located on King Street in Charleston. Amina was thrilled to learn that we live near Charleston. All of us who are local need to stop by the shop and support our sisters around the world.