“Travel is fatal to prejudice, bigotry, and narrow-mindedness, and many of our people need it sorely on these accounts. Broad, wholesome, charitable views of men and things cannot be acquired by vegetating in one little corner of the earth all one’s lifetime.”  — Mark Twain

Thinking of making a career move? Open a car wash in Oman. The demand is certainly here since you can be fined for having a dirty car. That gum wrapper? Don’t even think of throwing it on the ground. That would spell big trouble for you. Littering is seriously verboten. Muscat is by far the cleanest city we have ever seen. Everything is really shiny and spotless here and, for the most part, looks brand spanking new.

Sultan Qaboos bin Said runs a tight ship. His Majesty assumed power in 1970. The Sultan has done incredible things for the country since he came to power. He likes things clean and he likes to have things named after him. You should see all the roads named Qaboos this or Qaboos that. His picture is everywhere and it’s always larger than life. If I lived here, I fear that his face would be the last thing I would see when I went to sleep and the first thing I would see when I woke up. Scary stuff. And don’t get me started on how many buildings bear his name. The port facility comes to mind first, since we are there. It reminds me of Peachtree Street in Atlanta. Has anyone ever made an accurate count of how many Peachtree Streets or Peachtree Circles or Peachtree Drives there are? Seems like there were thirty-something the last time we were there and that was a long time ago. That was back in the olden days of paper maps and it was not in the least bit funny trying to find a place with a Peachtree Street address. 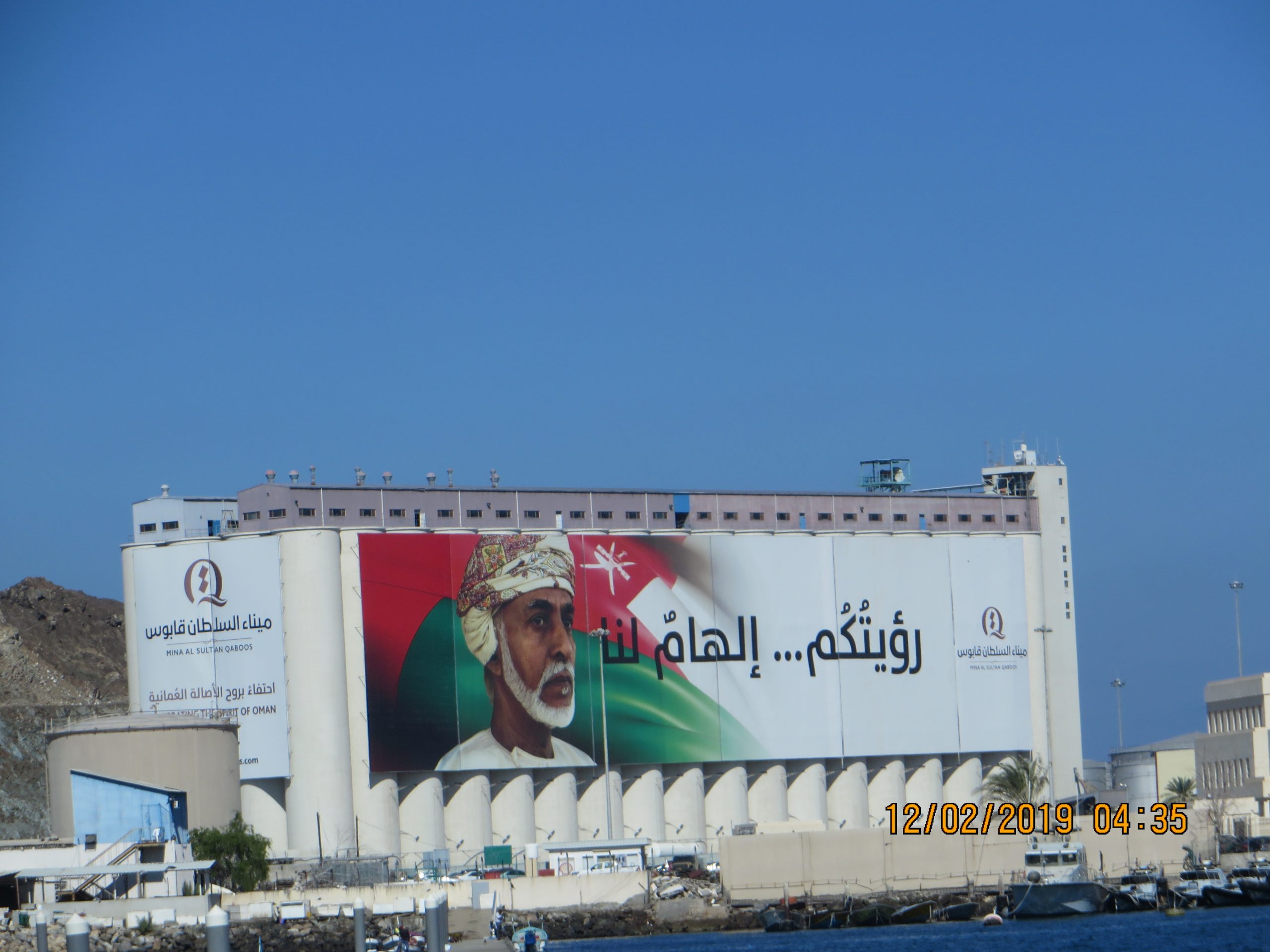 His Majesty’s face is everywhere! 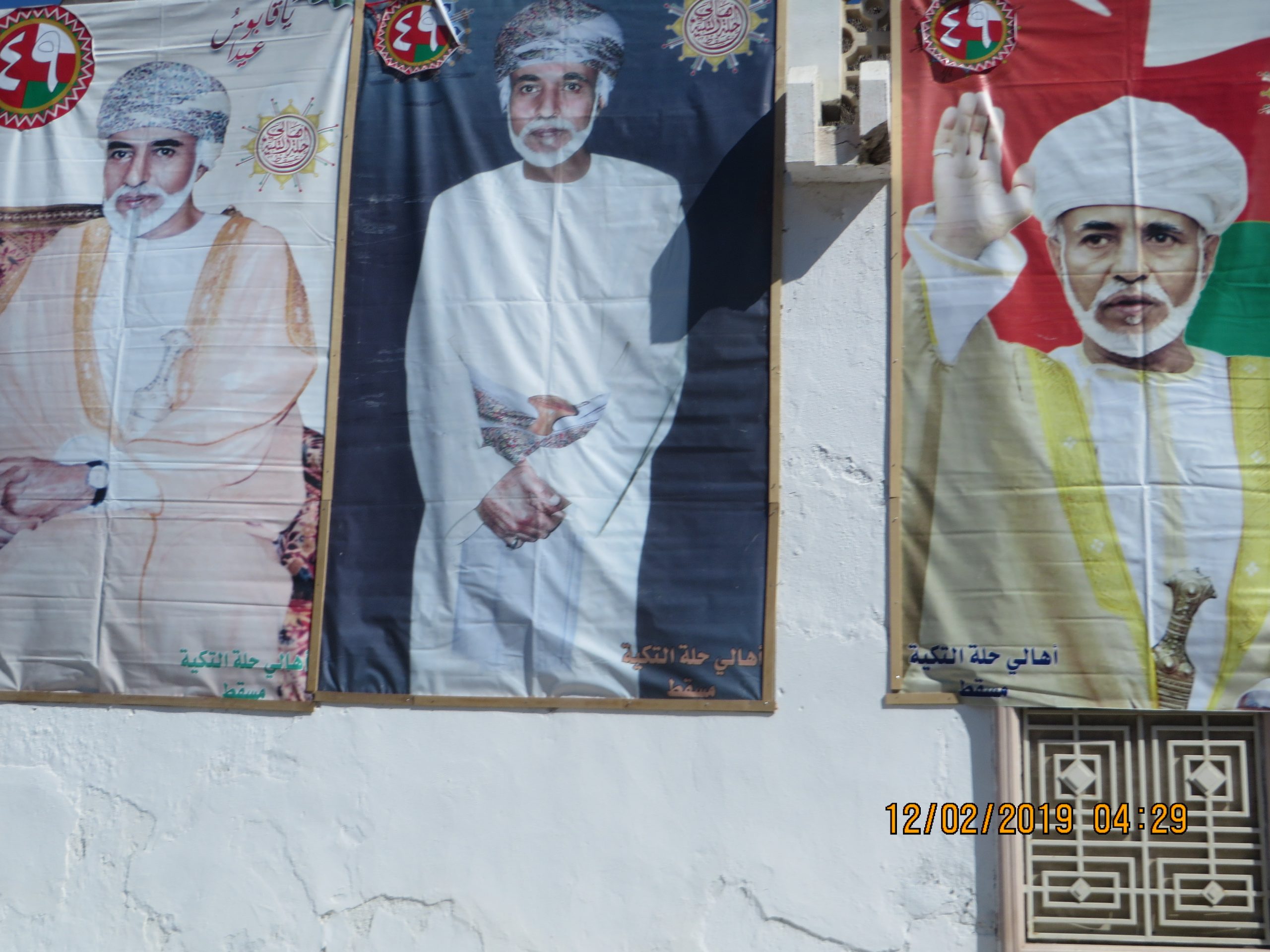 But back to Oman. It seems that Oman is trying to carve out its own special niche in the neighborhood. It is surrounded by UAE with its excesses, Saudi Arabia with its ultra-conservativism, and Yemen, its perennially cranky neighbor, so WHOA! Moderation would be a novel idea here! Women can drive in Oman and work any job they choose. Another big plus, education is big for boys and girls. Still, like their neighbors, the people of Oman have a fussy dress code. If you plan to go to some places (like a mosque), you must cover your hair, knees and shoulders; sometimes, you must cover your arms down to your wrists. I told Rick that this is the one time I wish I had some jeans with holes and slashes all up and down the legs, but with the knees covered. He said I should stop being so ornery, but when I pointed out that the rules also applied to men, he got a little huffy at the thought of going out in the heat dressed like that. As we headed out the door, I could not help myself; I tugged my shirt a little lower in the front. Cleavage was not mentioned in anything I read.

We had two days in and around Muscat. It was fun to get back out and see this place again. I had forgotten that I love the hats Omani men wear; they remind me of the hats worn by the employees of In-and-Out Burger, so fond hamburger memories popped up. Sunday evening, we took a bus ride about thirty minutes out of the city to the Oman Convention and Exposition Center for a concert. This venue was completed last year and, without a doubt, it was the most beautiful concert hall I have ever seen. I kid you not. His Majesty likes things very nice and he gets what he wants. We were treated to a concert by the Muscat Brass Band. This band has a list of accolades as long as your arm, but I will skip all that and tell you what we experienced last evening. The Muscat Brass Band took the stage clad in black slacks and shirts, not the traditional Omani dress. There were about eighteen members of the band and the director had a British or Australian accent, which surprised me. I was also taken aback to see about five women in the band. The sound this band made was absolutely stunning and their repertoire was wide-ranging. Lots of their selections were not familiar to me, but I did recognize some tunes like one from West Side Story and from Star Wars. They also did a medley of purely American tunes. About half way through, they left the stage and out came five young Omani men dressed in traditional Omani clothing with traditional Omani musical instruments. They played a selection of Omani music and that was quite nice. They ended their performance with a Bob Marley tune which everyone loved. “Don’t worry ‘bout a thing, ‘cause every little thing gonna be all right . . . “ Then the Muscat Brass Band came back on stage for a few more numbers, ending their performance with the most incredible rendition of Bohemian Rhapsody. Freddie Mercury would have been so very proud. As a special encore presentation, they played “The Most Wonderful Time of the Year.” It was rather stunning to hear a band in a Muslim country play a Christmas carol! 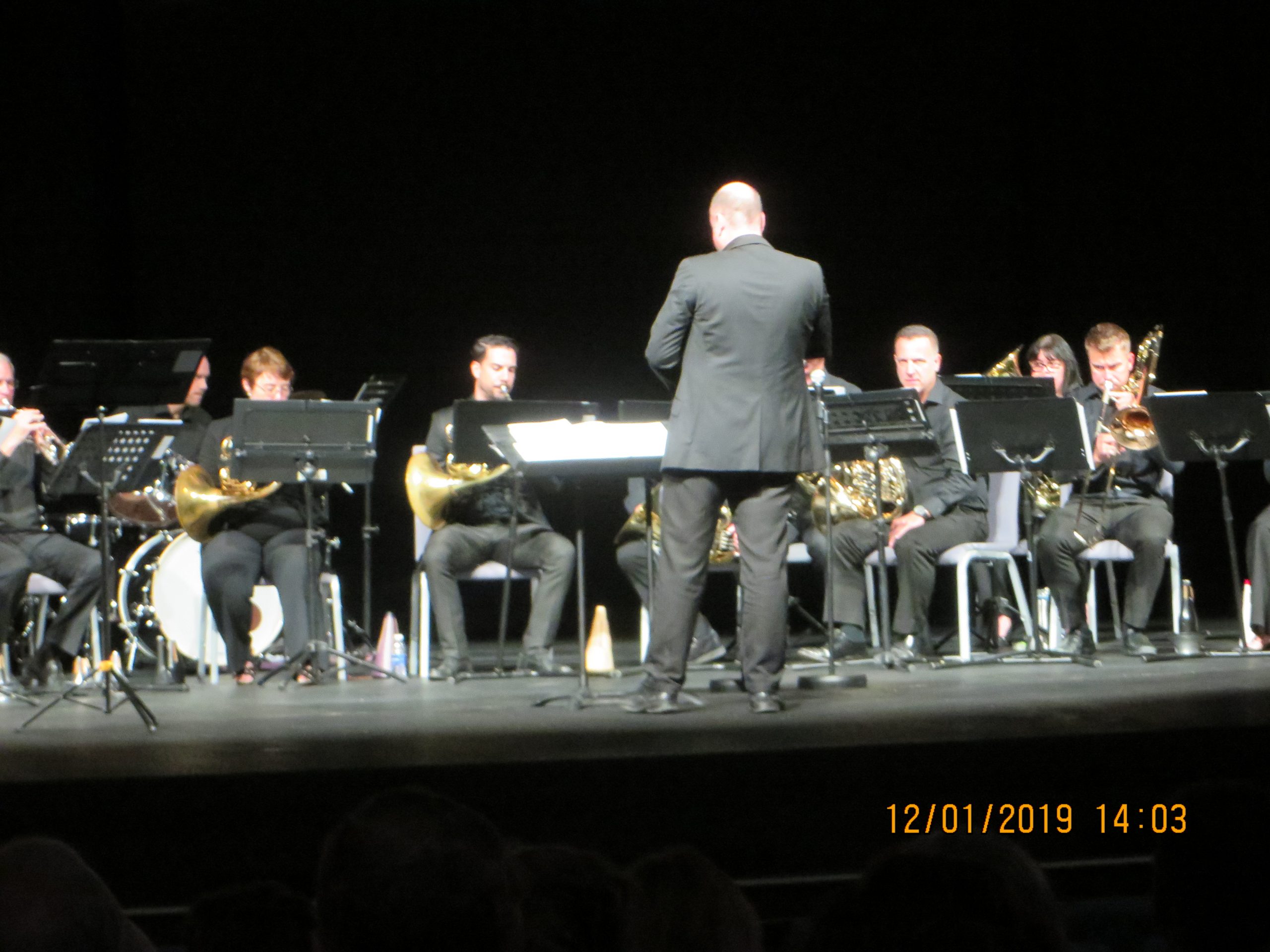 Part of the Muscat Brass Band 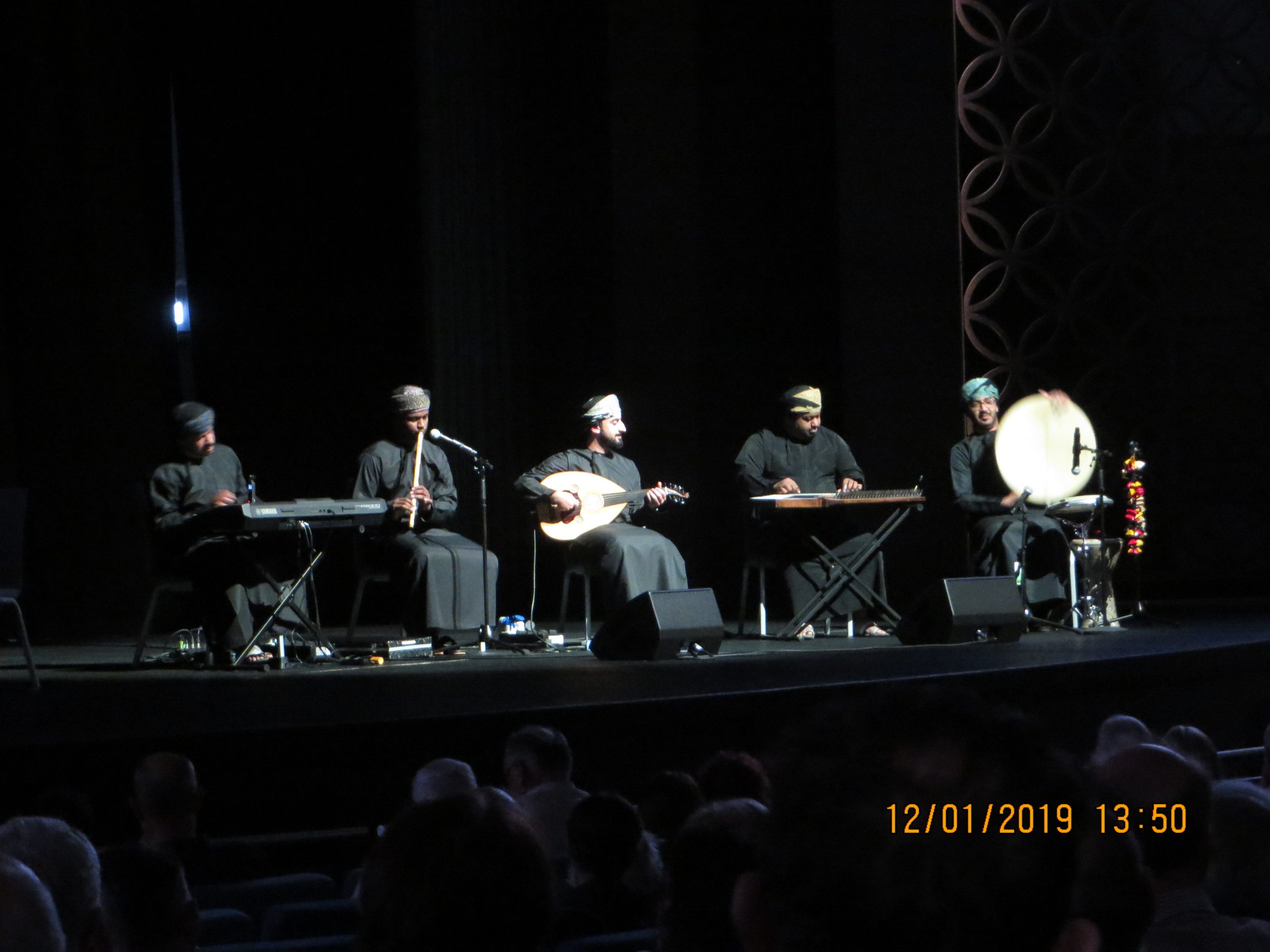 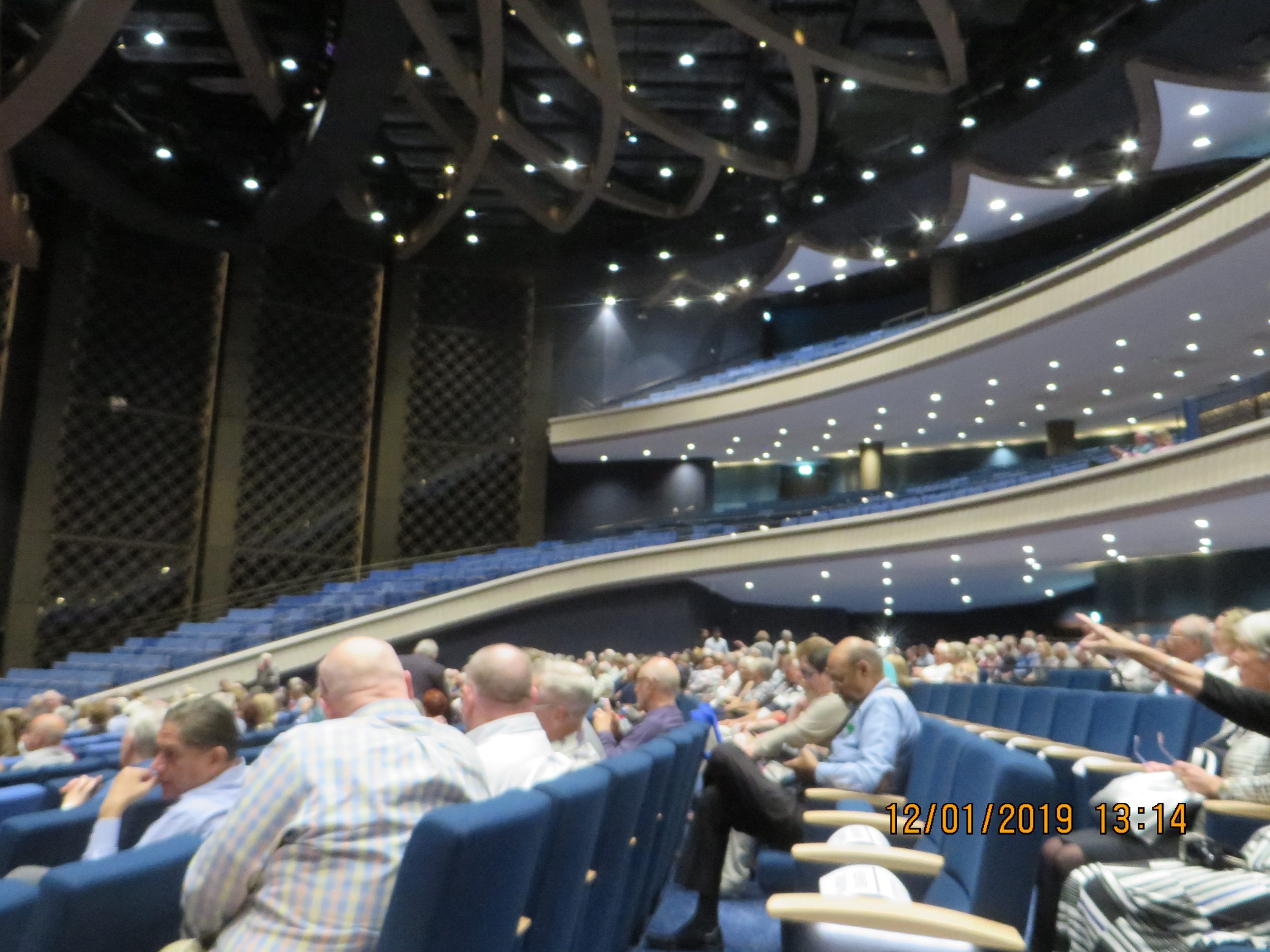 A photo of the Oman Convention and Exposition Center. If you look carefully, you can see part of the massive sculpture of the Sultan Qaboos rose on the ceiling.

This is our second time in the Middle East, although we have been to many predominantly Muslim countries. We find both the Arab world and the Muslim world completely alien and endlessly fascinating. I keep doing these Venn diagrams in my head, trying to put different aspects of this part of the world into proper perspective as they intersect (or do not). I don’t know if that is helping me figure it out, but just being here sends us home with a better understanding of what makes these people tick. I hope that, as the Middle East opens up and they are exposed to the thousands of people from all over the world, they will get a better understanding of what makes us tick, too. It’s a two-way street. One thing is for certain; we all have to get out of our comfort zone and see things for ourselves or, at the very least, read a lot. From here, we head on to Bahrain and Qatar before circling back to the UAE. There is just no telling what we will see and learn and how it will change us as we travel from the Gulf of Oman through the Straits of Hormuz into the the Persian Gulf. 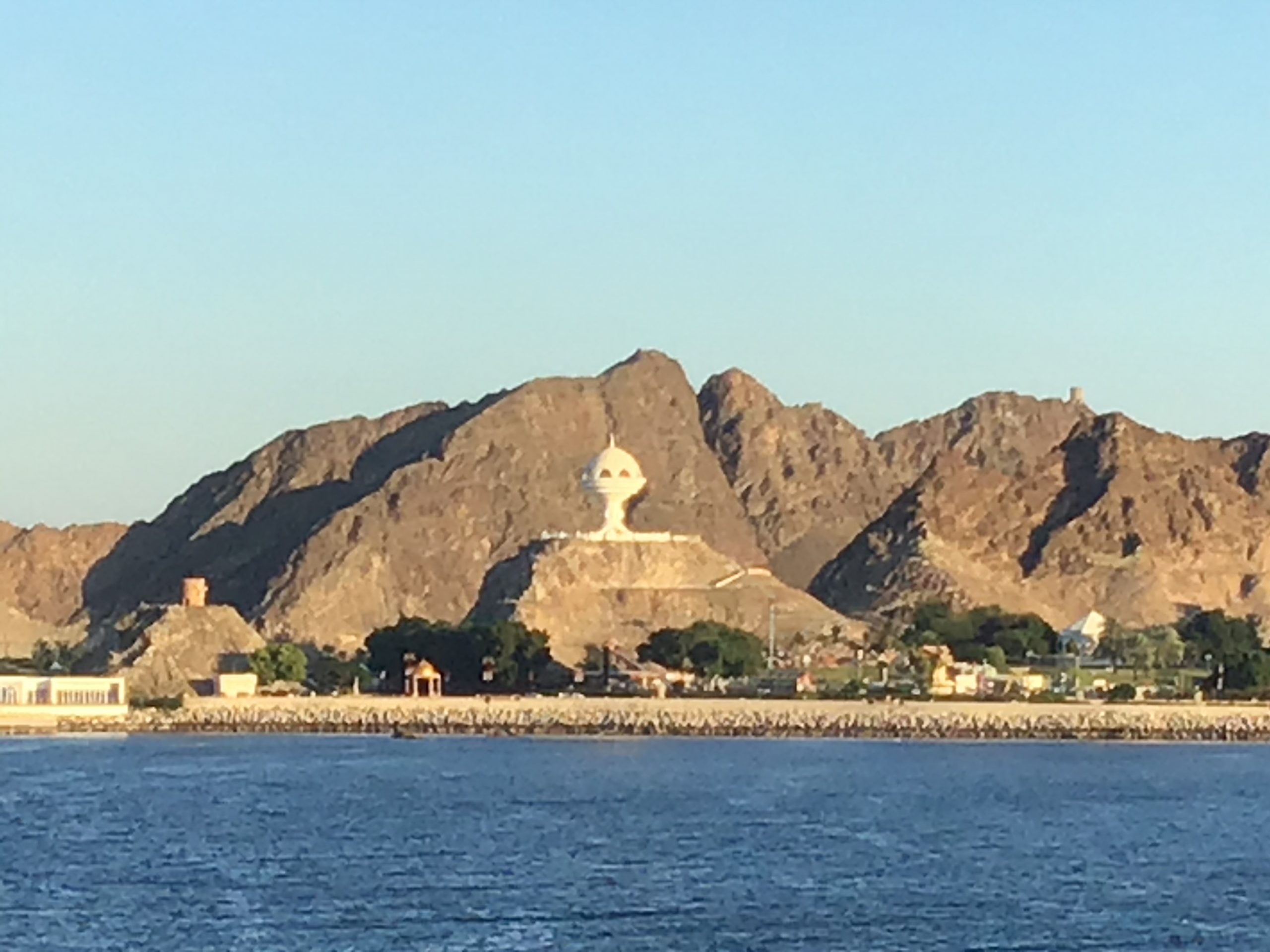 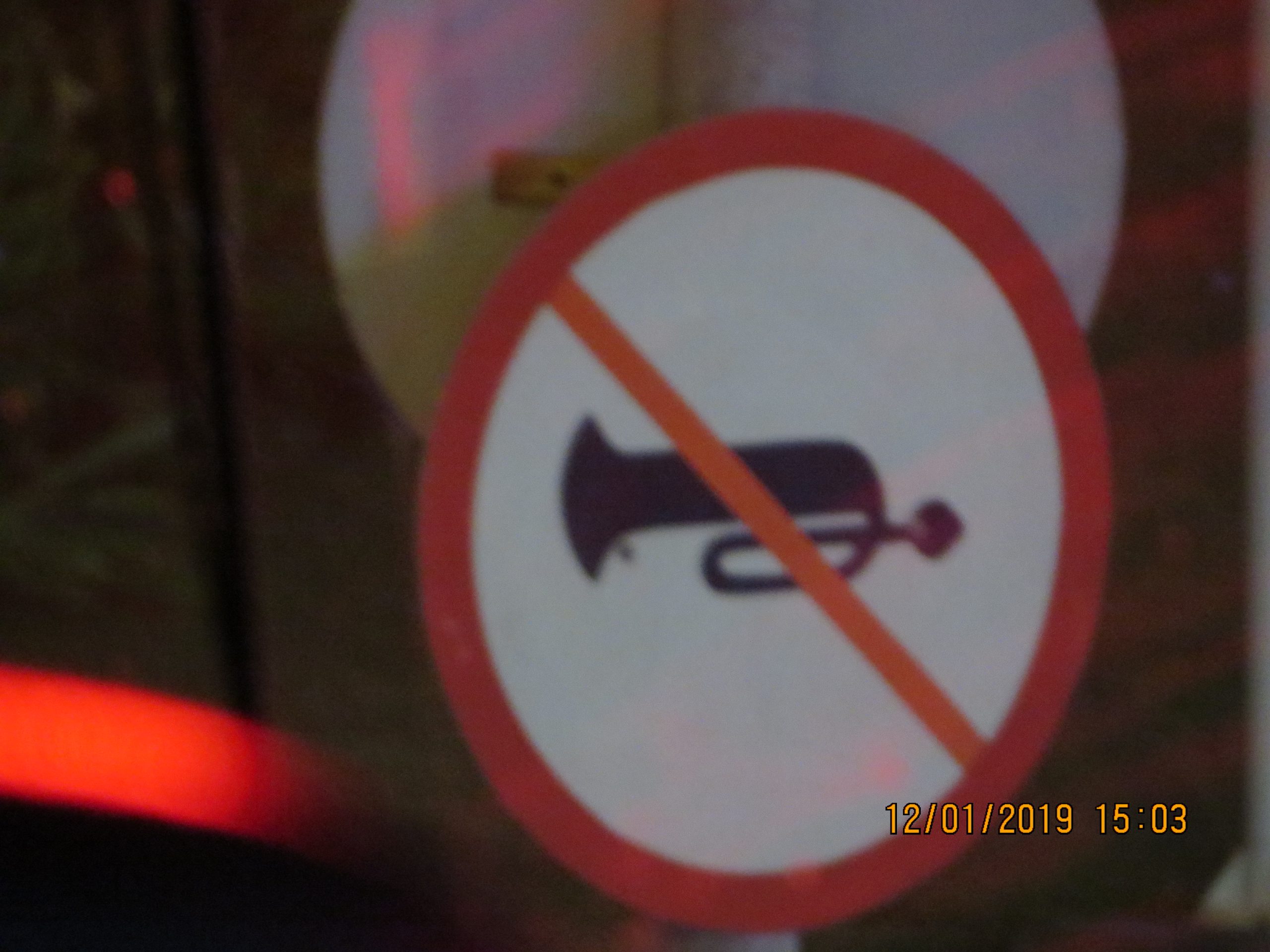 No horn blowing in the round-about! The people of Oman are good, safe drivers, unlike their counterparts in other countries around here.