This is a familiar scenario: we are sitting in an airport lounge waiting. And waiting. And waiting some more. No matter how meticulously you plan, it cannot be avoided, but it’s a good time to go through the cameras and cull lousy pictures. You know, your basic blurry camel photo or the night sky shot that looks like you photographed the inside of your lens cap. So that’s what we did. And now I want to show off a few of the good pictures.

We have been back in Dubai for the last two days. When we were here in the spring of 2018, we wandered around old Dubai with a charming young lady named Nada. Nada is Jordanian by birth but grew up in Dubai. She remembers when there was only one skyscraper, and says it is not even close to being a skyscraper by today’s standards.
Last year, she took us through the souks and we popped in at a few museums. We even took a ride across the Dubai Creek in an abra, a traditional old wooden boat. Since we had time on our hands here this week, we thought it would be fun to get out in the city with her again. We contacted Nada and the three of us put our heads together, at least as best you can through email, and she helped us plan two perfect days in Dubai.

Yesterday morning, we met Nada in the cruise ship terminal and off we went with our driver, immediately being swallowed up by the morning rush hour traffic. Soon we stopped at the Ras Al Khor Wildlife Sanctuary. There before us was a sight that reminded me of one of those pictures on a test from my childhood where they ask, “What does not belong in this picture?” Here was a wetland area at the end of the Dubai Creek teeming with all sorts of birds. Nada said that sixty seven species pop in from time to time, but what makes the area so surreal is the juxtaposition of all the flamingoes with the skyline of Dubai. It was an incredibly serene setting just out of earshot of the bustling business district. 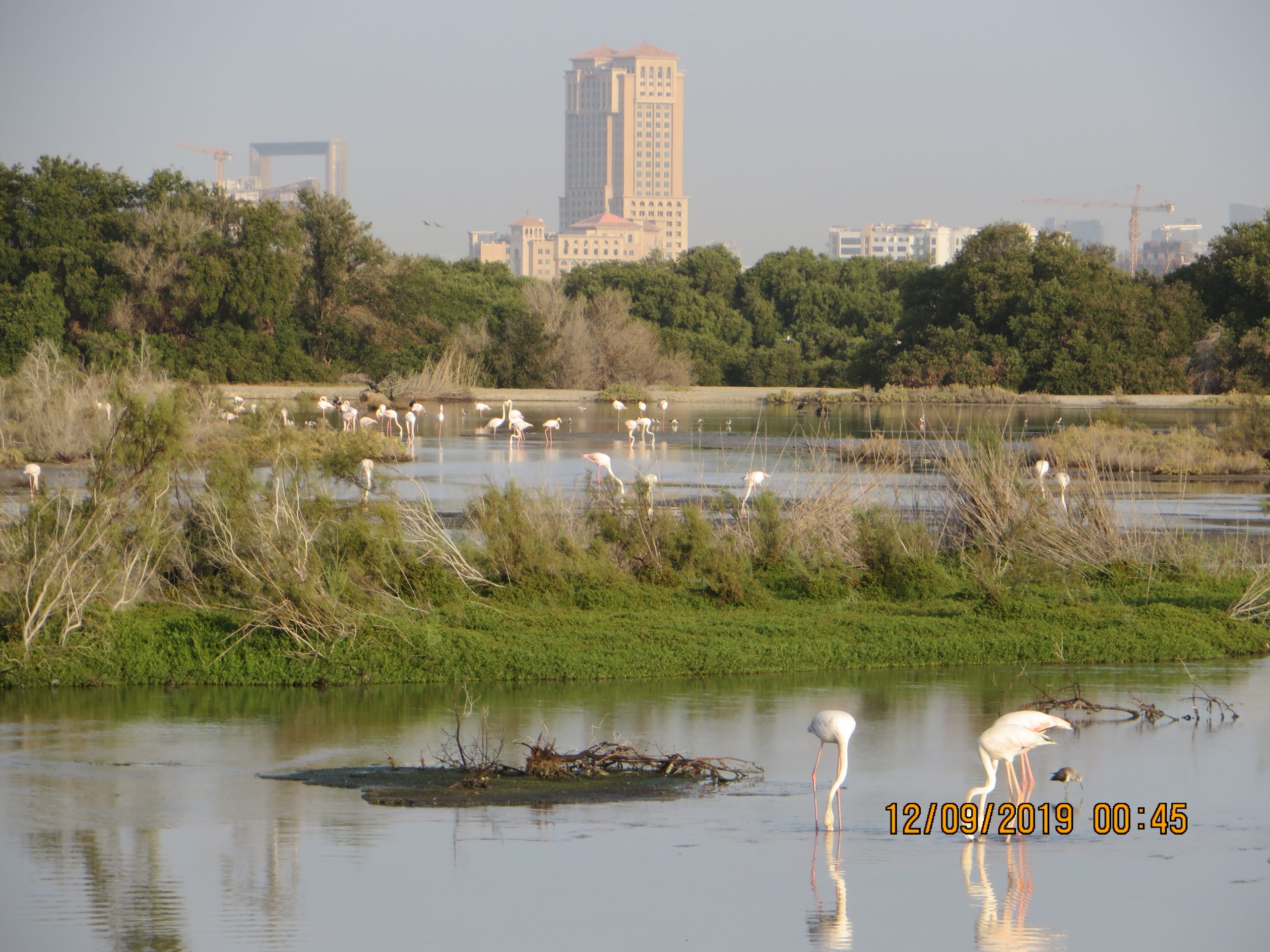 When we left the wetland bird sanctuary, we drove to a fabulous resort where a center for birds of prey is housed on the grounds. The facility is run by a young man from Zambia. First he brought out a Kestrel named Simba, but the star of the show was an Arabian Desert Eagle Owl named Mary-Kate. (Mary-Kate has a twin sister named Ashley. I wonder if the Olsen girls know there are owls named after them in Dubai and I also wonder if the birds’ last name is “Owlsen.”) It was a highlight of the trip to get to wear the glove and have Mary-Kate swoop in for a bit of food, then take flight again. Our guide told us all about the history of falconry in the Middle East and it is quite a story. 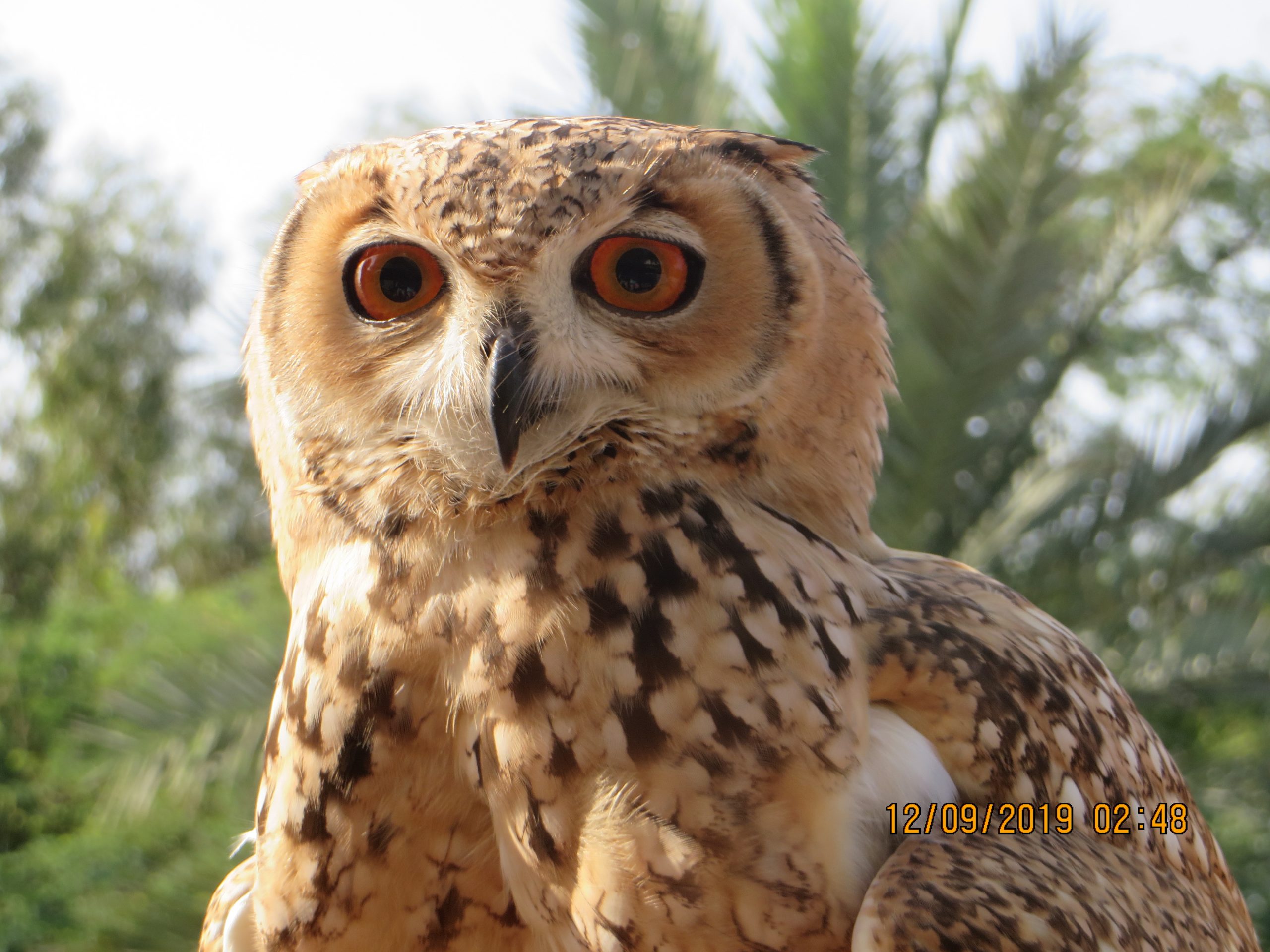 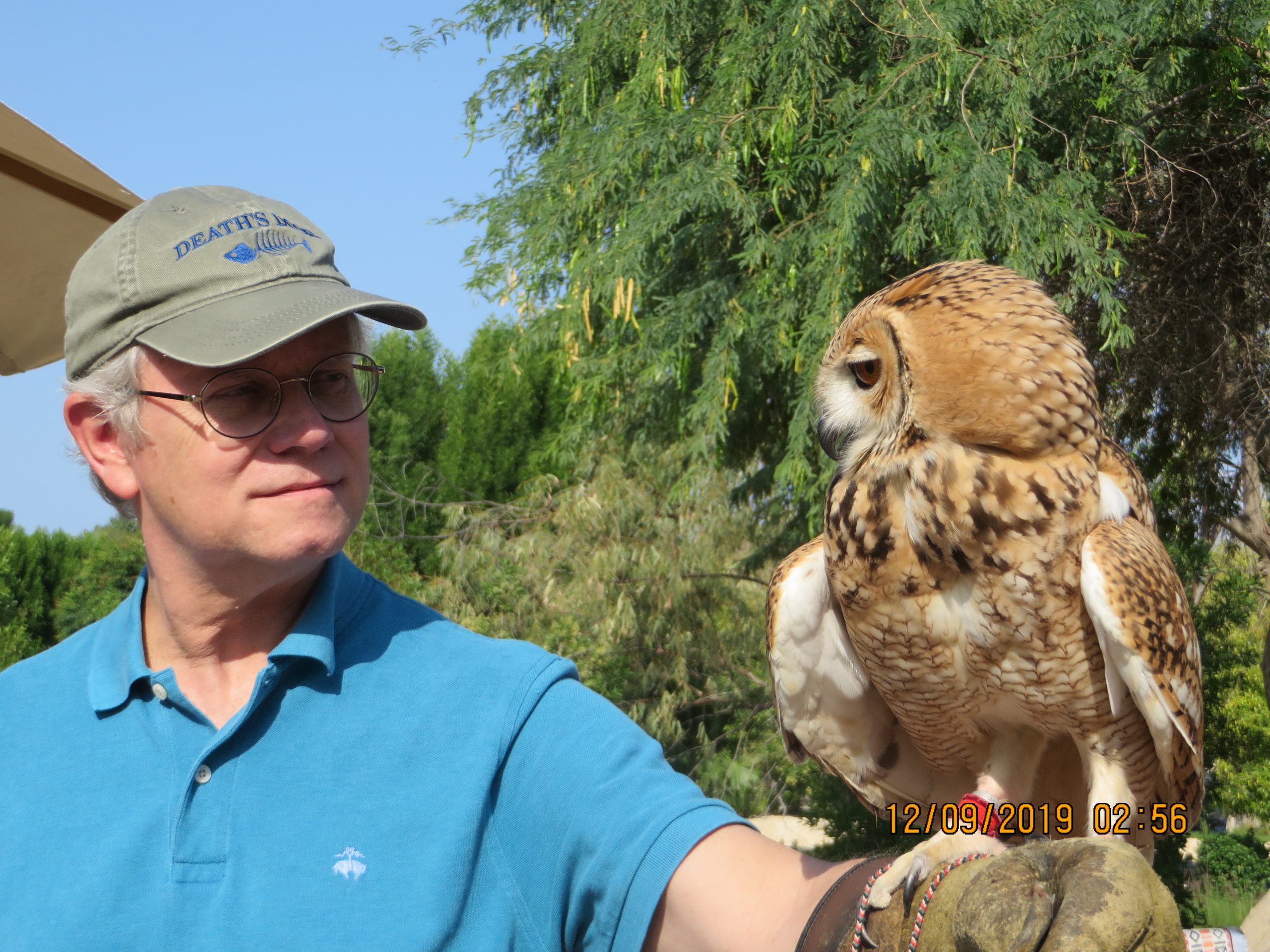 Falconry has been practiced in the area for thousands of years. The Bedouins noticed that the falcons migrating over the desert were quite skilled at catching food, so they decided to cash in on this. They figured out how to catch the falcons and how to train the birds to hunt for them. However, over time, the practice has been used and abused to the point that it is illegal to hunt with falcons in the UAE. It is still completely legal to own them, so now they are used for racing. It has become a rich man’s sport: a well trained, fast bird can fetch upwards of a hundred thousand dirhams. Then you will need a trainer and top notch facility to house your bird, so obviously, unless Sultan is your title, maybe you should look for another hobby. The purse for these races is outrageous. First place might net you a cool million dollars. The owner coming in third place might drive away with three insanely well tricked out SUVs.

But let’s say you get your bird and all the trappings and you still just gotta hunt. There are countries in the Middle East where hunting is still legal, so it’s easy. You just get your falcon his/her passport (seriously), buy two business class tickets on Emirates or Etihad (birds need a seat, too, and they cannot fly coach), and then the two of you soar through the friendly skies to someplace where, if it is not totally legal, they will at least turn a blind eye while you indulge in your passion.

Birds aren’t your thing? How about camel racing? We left the bird facility and dropped in at a camel farm. There we fed some of these “ships of the desert.”  They have been given that nickname because of how they ambulate. Right front leg and right back leg go forward at the same time, then left front leg and left back leg, giving them a rocking kind of motion that mimics a ship’s movement through the sea. Camel racing is a big sport, and again, it not a sport for the poor. The rich guys like to bet on the races although I am pretty sure it is forbidden to bet if you are Muslim. But I am not here to judge. Below are some our new friends. The one with the hot pink tassel is preggers. (She’s Lana and she is in the middle).The gestational time for a camel is thirteen months. I asked the man showing us around the farm if he had a favorite and he replied that he did. I thought that was kinda sweet, but I guess it’s no different than having a favorite dog or cat. I just never thought that anyone had affectionate thoughts about camels. By the way, we also tried camel milk. It was ok, but I probably won’t ask Publix to start carrying it, to be honest. 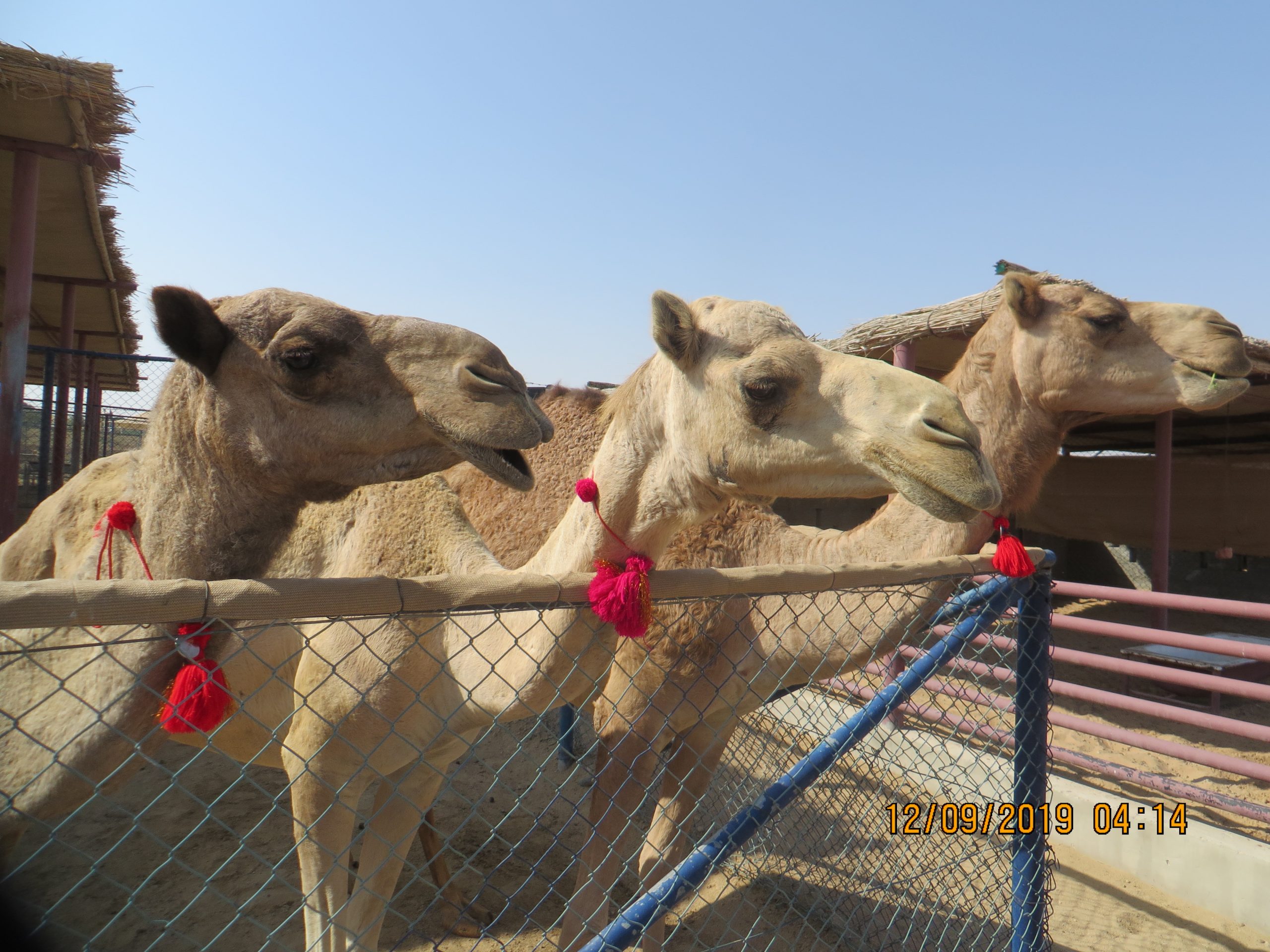 Today, Nada gave us a taste of Dubai. Just what we needed: more food. We went all over Dubai and tasted specialities from around the world. With an expat population at around ninety two percent, the food options here are about as varied as you will find anywhere. We started the morning going across the Dubai Creek in an abra so that we could get to the old part of town and the souks. Nada took us to a shop selling sambusas, which are basically the local version of Indian samosas. These are little fried packages filled with meat, vegetables, or chicken. We sampled the vegetable one as well as a potato sambusa. The vegetable sambusa was good, but the one filled with potato was super, mainly because it had lots of heat going on, which fed that spicy monkey we both have on our backs. While we munched on them, we sat in a little garment shop next door where Nada enlisted the help of the owner to give us a lesson in the clothing worn by the Emirati men and women. Then we popped in at a date shop and purchased several boxes of dates to feed Rick’s growing habit. 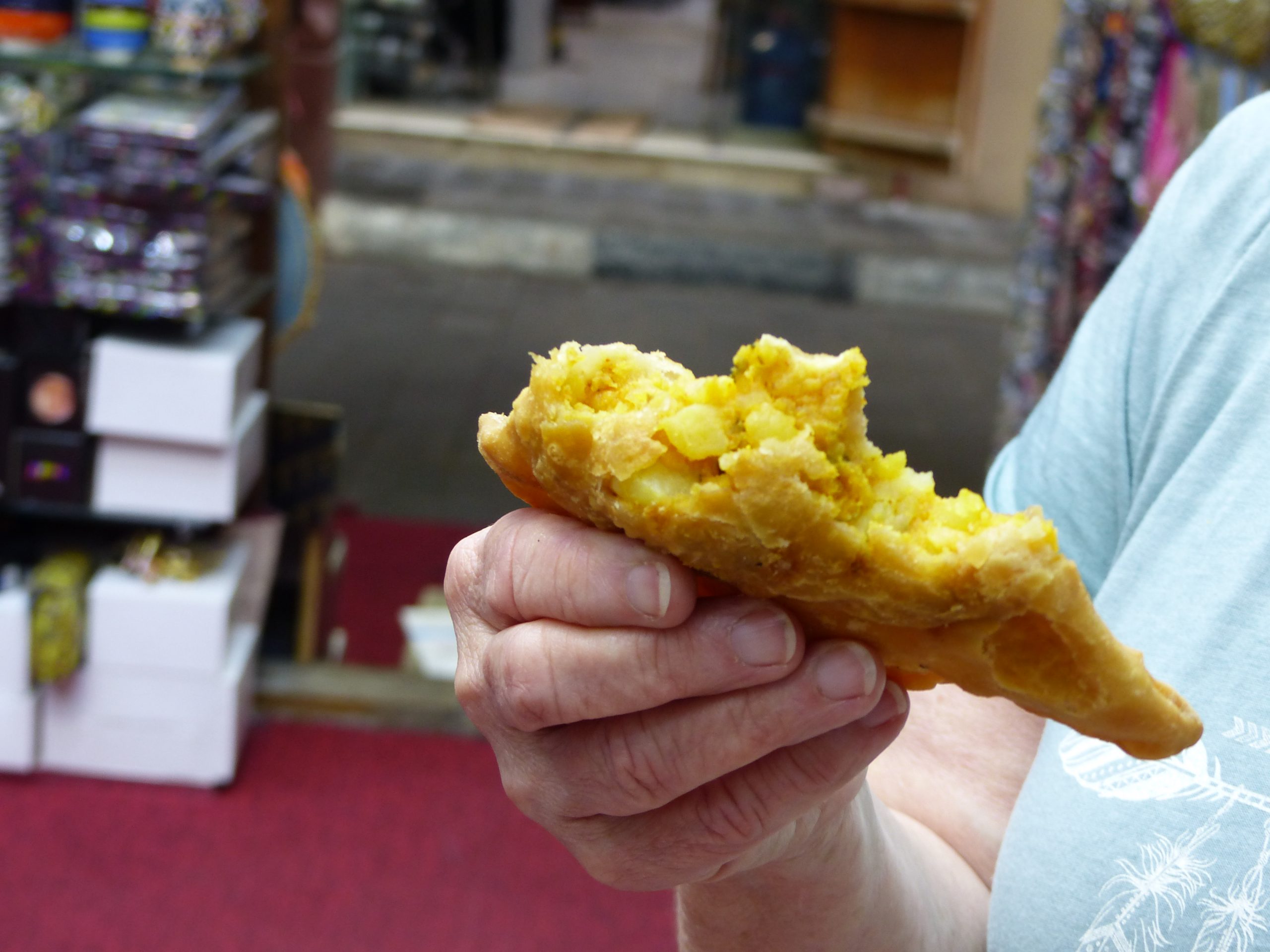 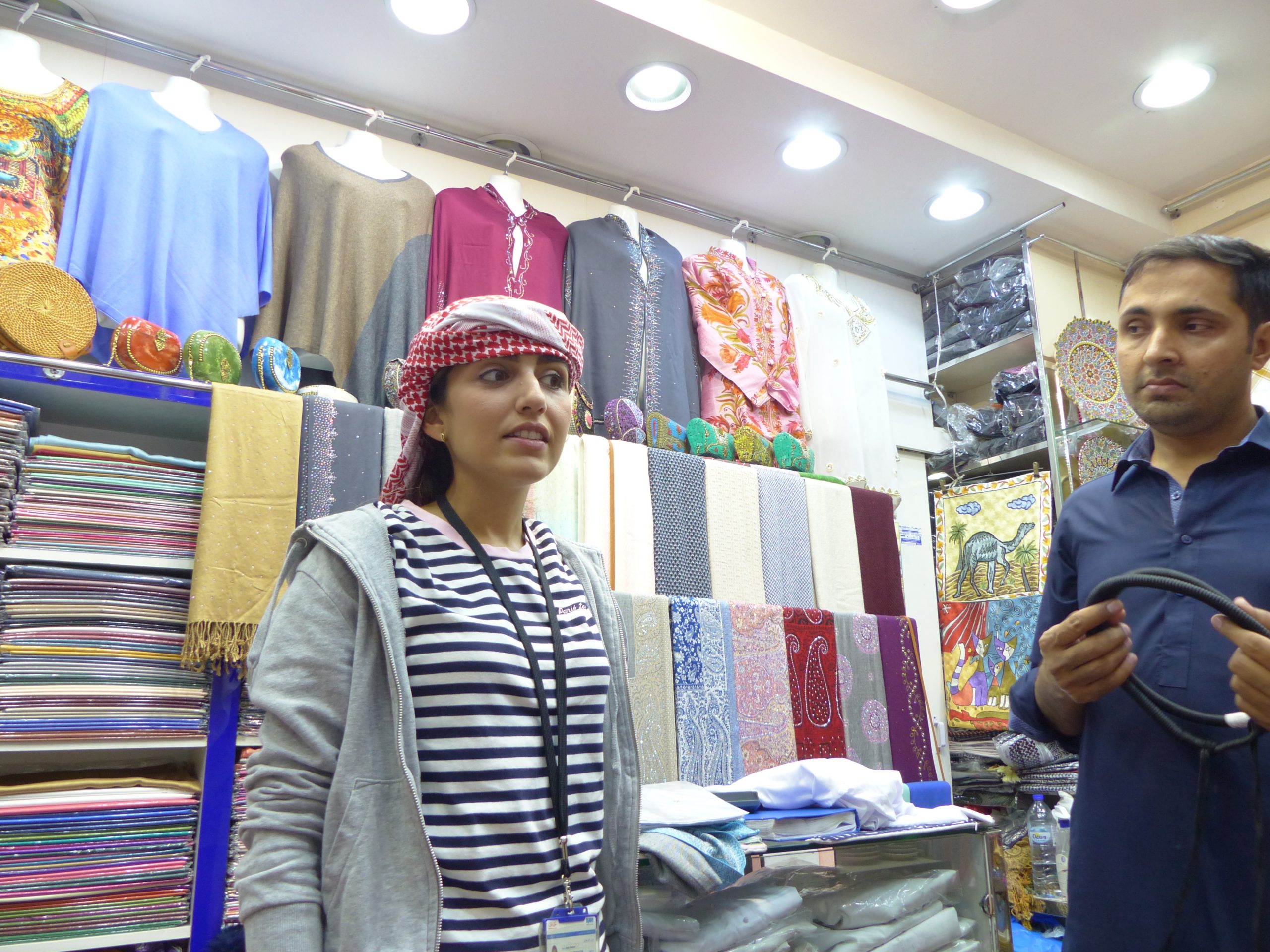 Soon we met up with our driver and sped across Dubai to a new Egyptian restaurant to share a big bowl of koshari. This is Egyptian comfort food. It is a big bowl of macaroni, rice, and lentils. It’s up to you to do the rest: you can add chickpeas, fried onions, and some sort of tomato sauce to stir in along with a big squeeze of lime. We passed around something spicy hot and red which really kicked it up. It’s momma’s home cooking if your home and your momma are in Cairo. 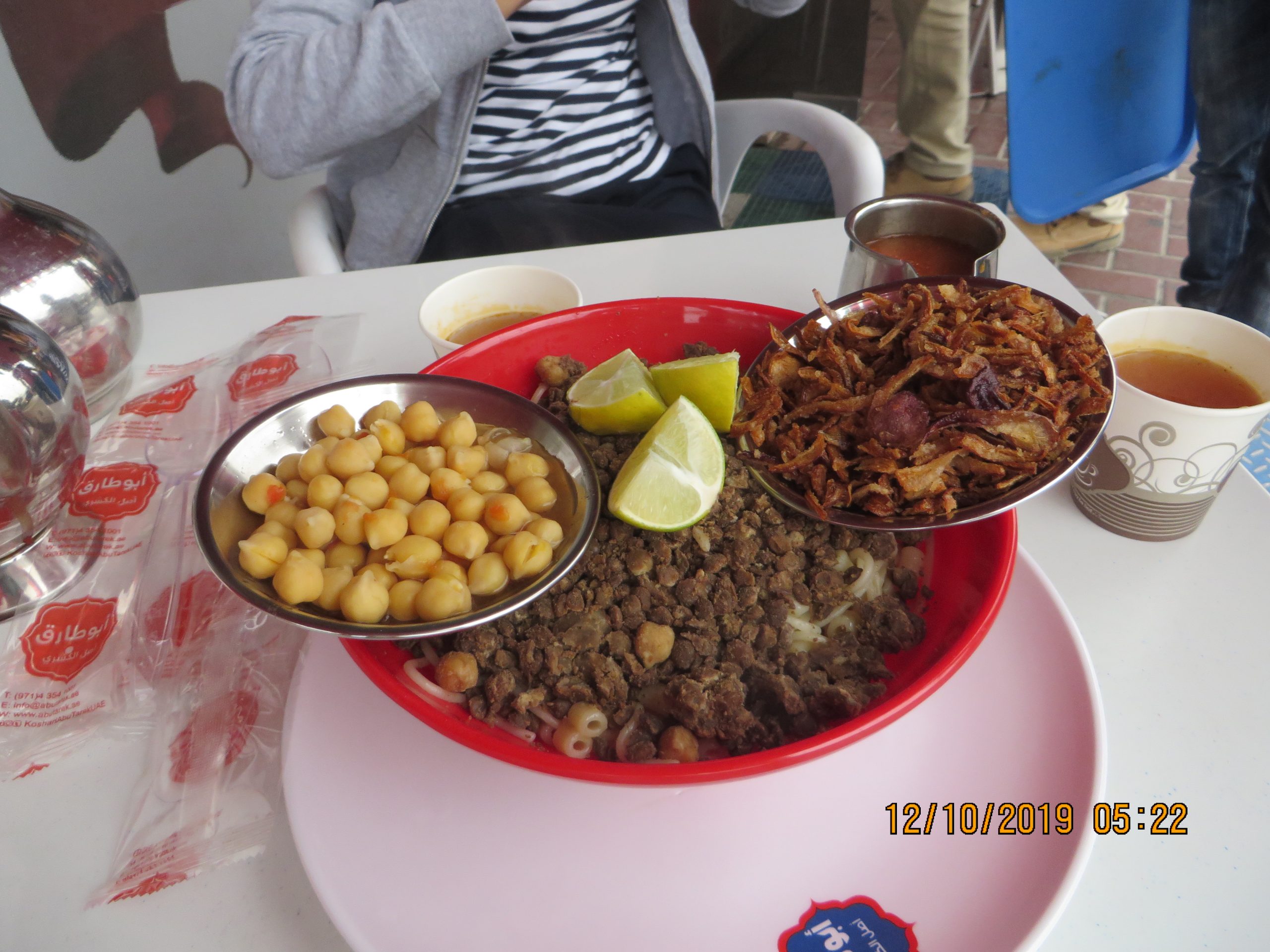 Next thing we knew, we were standing in front of a bakery learning the finer points of making the Palestinian favorite dessert called Kunafa. It’s a thin baked concoction of a bland cheese and semolina or vermicelli soaked with a sweet syrup. It is sprinkled with something to make it orange and it is often topped with crushed pistachios. Nada says people buy a huge pan when they celebrate and also when they mourn. It there is a death, people show up with Kunafa the way we bring cakes and casseroles. 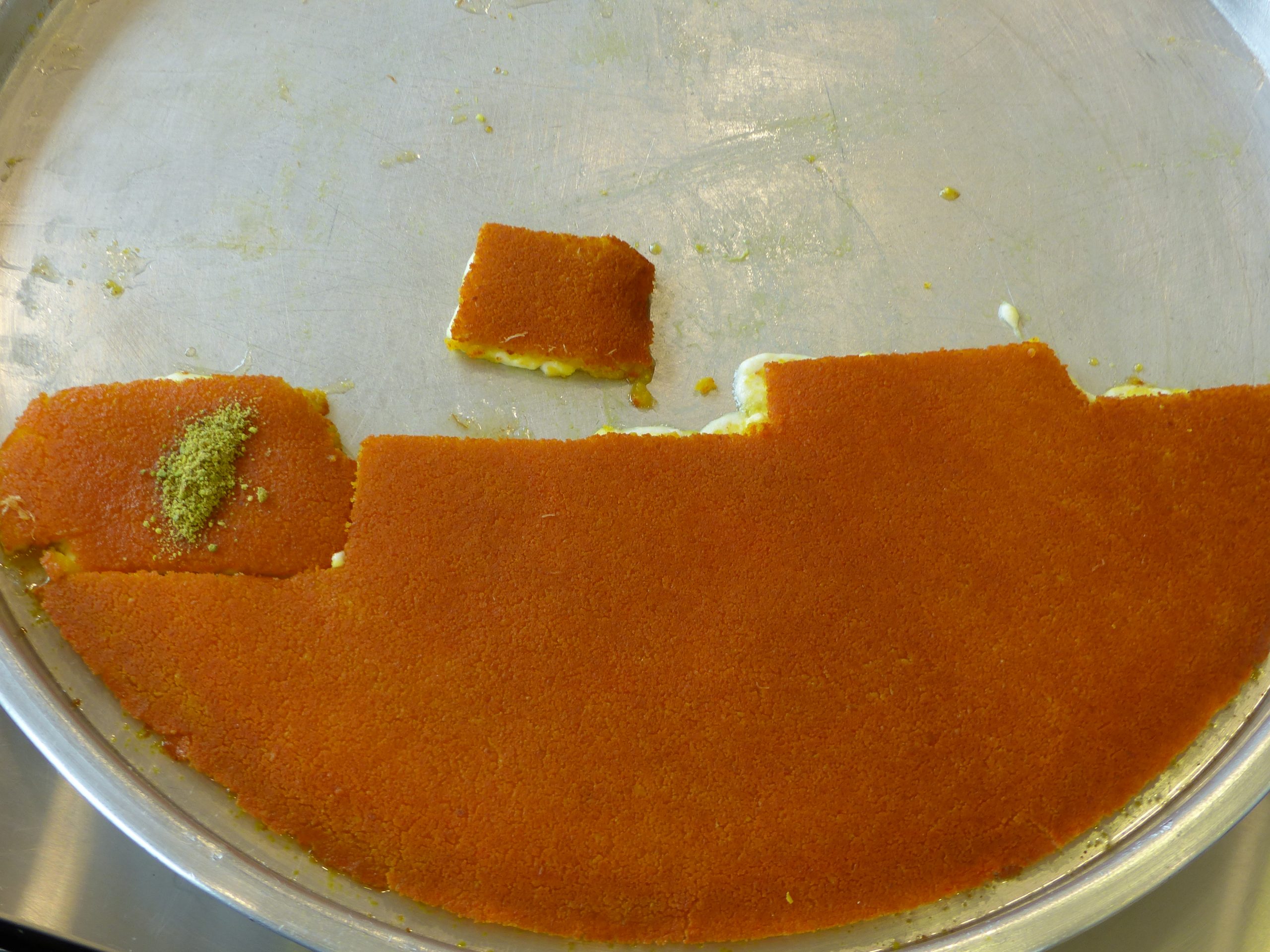 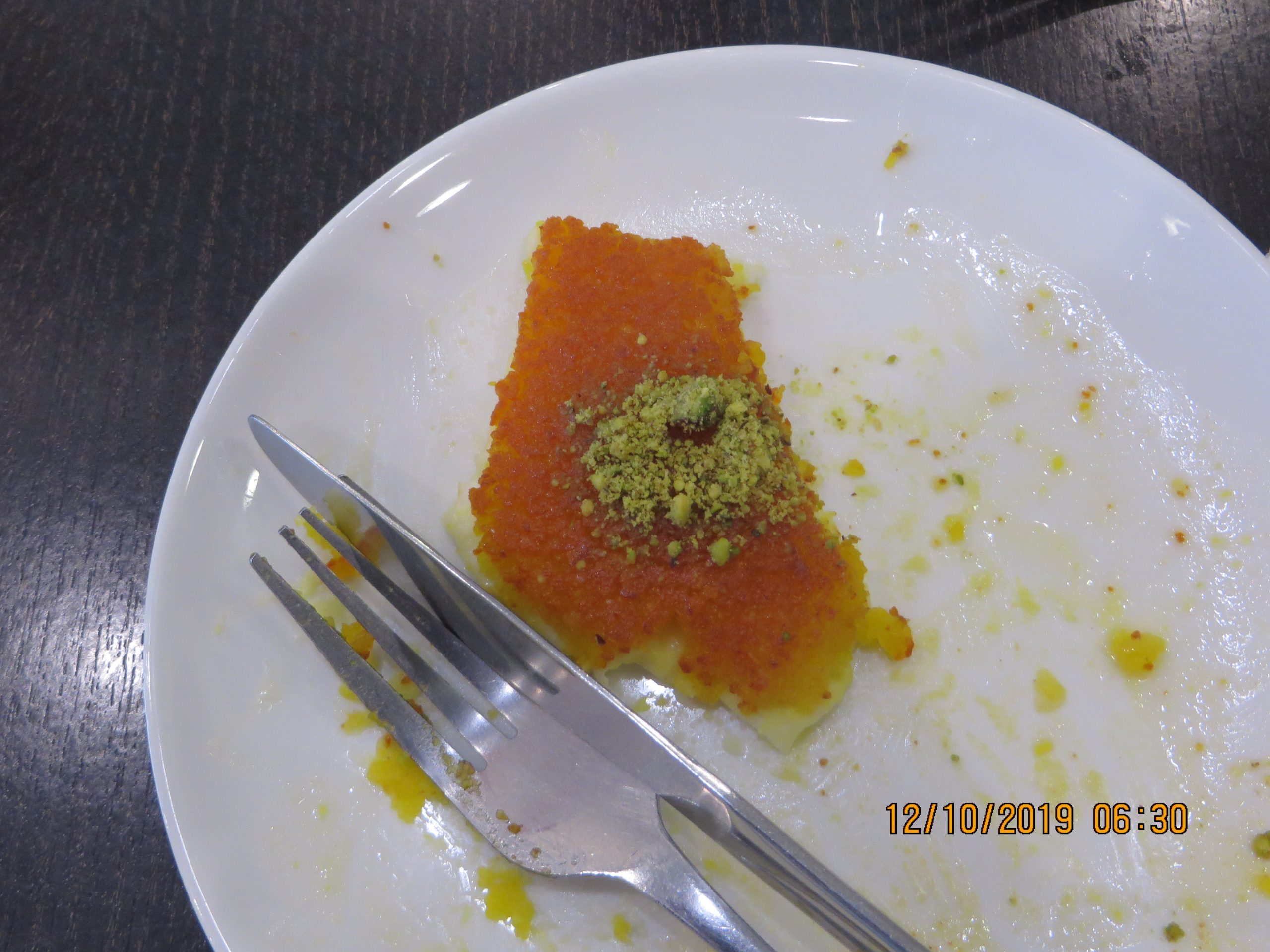 Our next stop was at a fish restaurant named Bu Qtair down by the water made crazy famous when Anthony Bourdain stopped and and filmed a segment for his show from there. The menu is simple: they only serve two kinds of fish and shrimp along with rice and a curry sauce on the side. We sat outside in the splendid weather and it was perfect. It was easy to see why Anthony loved the joint. 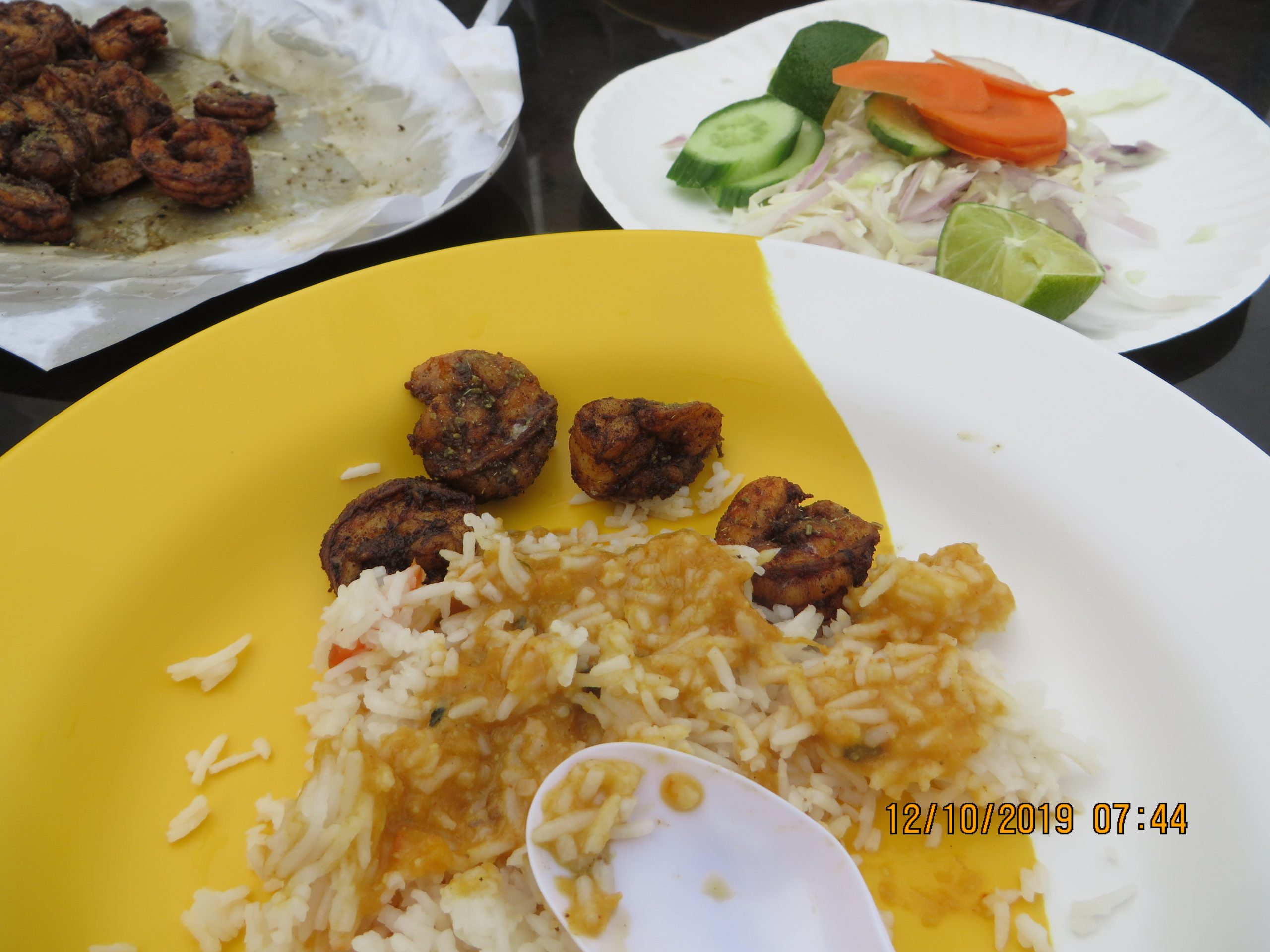 Shrimp and rice with curry sauce at Bu Qtair

From there, it was back downtown to a restaurant serving all the Arabic favorites. We split a lamb shawarma. It’s your basic shaved lamb wrap with lots of onions and pickles doused in tahini. It was good, but we thought it needed more lamb. We were about to pop, so we didn’t complain. But Nada was not finished with us. She said we just could not leave without tasting some Iranian bread down the street. We insisted on walking, hoping to make room for it. As fate would have it, we got our lucky break and the bread shop was closed. Nada wasn’t giving up so easily; she had our driver take us to another bread shop, but it was closed, too. Yay! Heartburn averted! 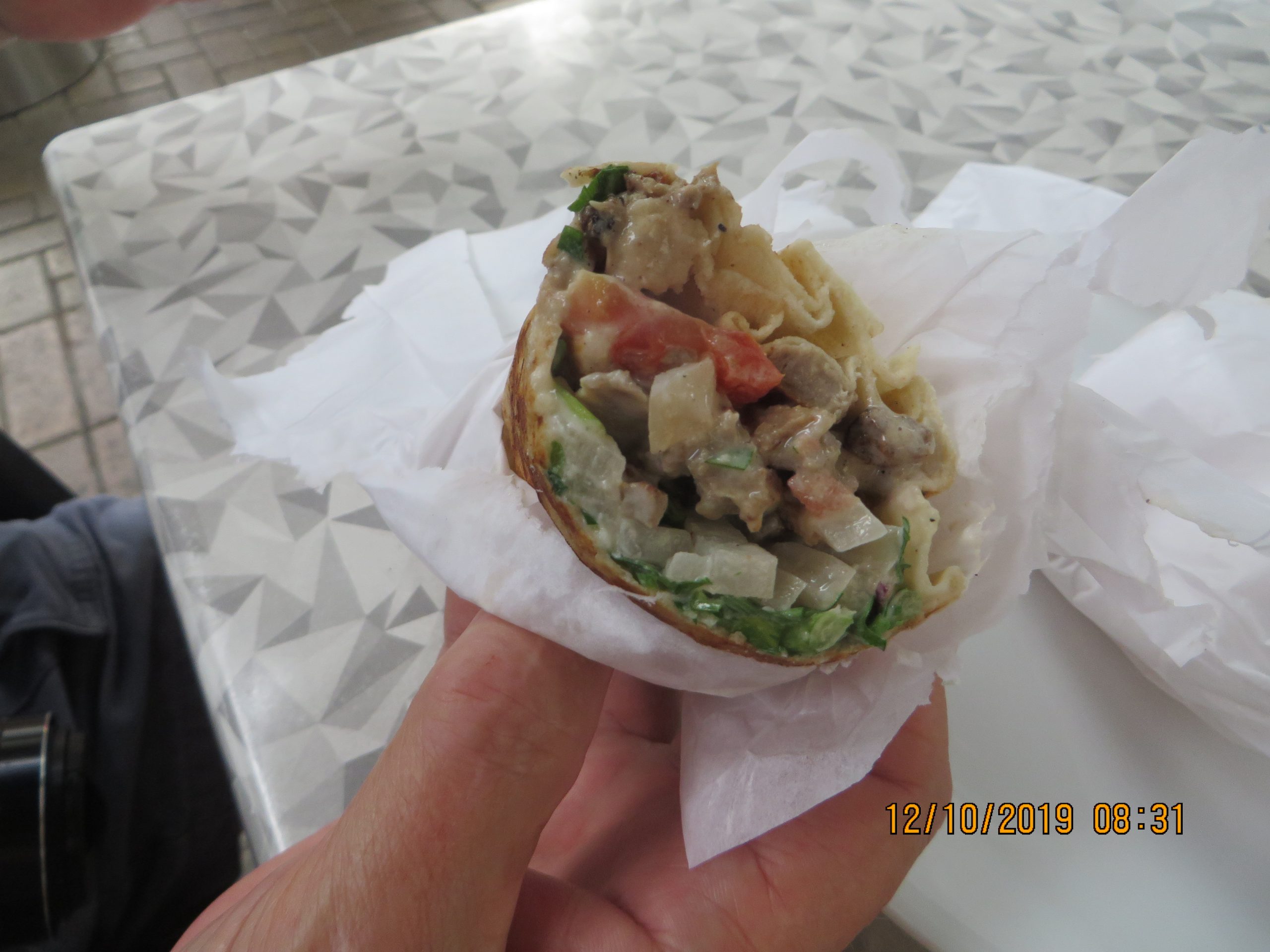 Bellies full and tour concluded, Nada and the driver dropped us off here at the airport where we sit waiting. But I just cannot end this post without telling about one more stop we made. Nada insisted upon showing us the ski resort at the Emirates Mall. Inside the mall is a complete ski resort featuring a bunny slope and an advanced slope. The hotel rooms at the resort look out over the slopes, the chairlift, and the luge. The temperature today at the resort was a cool minus two degrees Celsius and there was fresh snow everywhere. Nada said it’s a great place to come on a hot summer’s day. I will show some pictures just in case you don’t believe me. 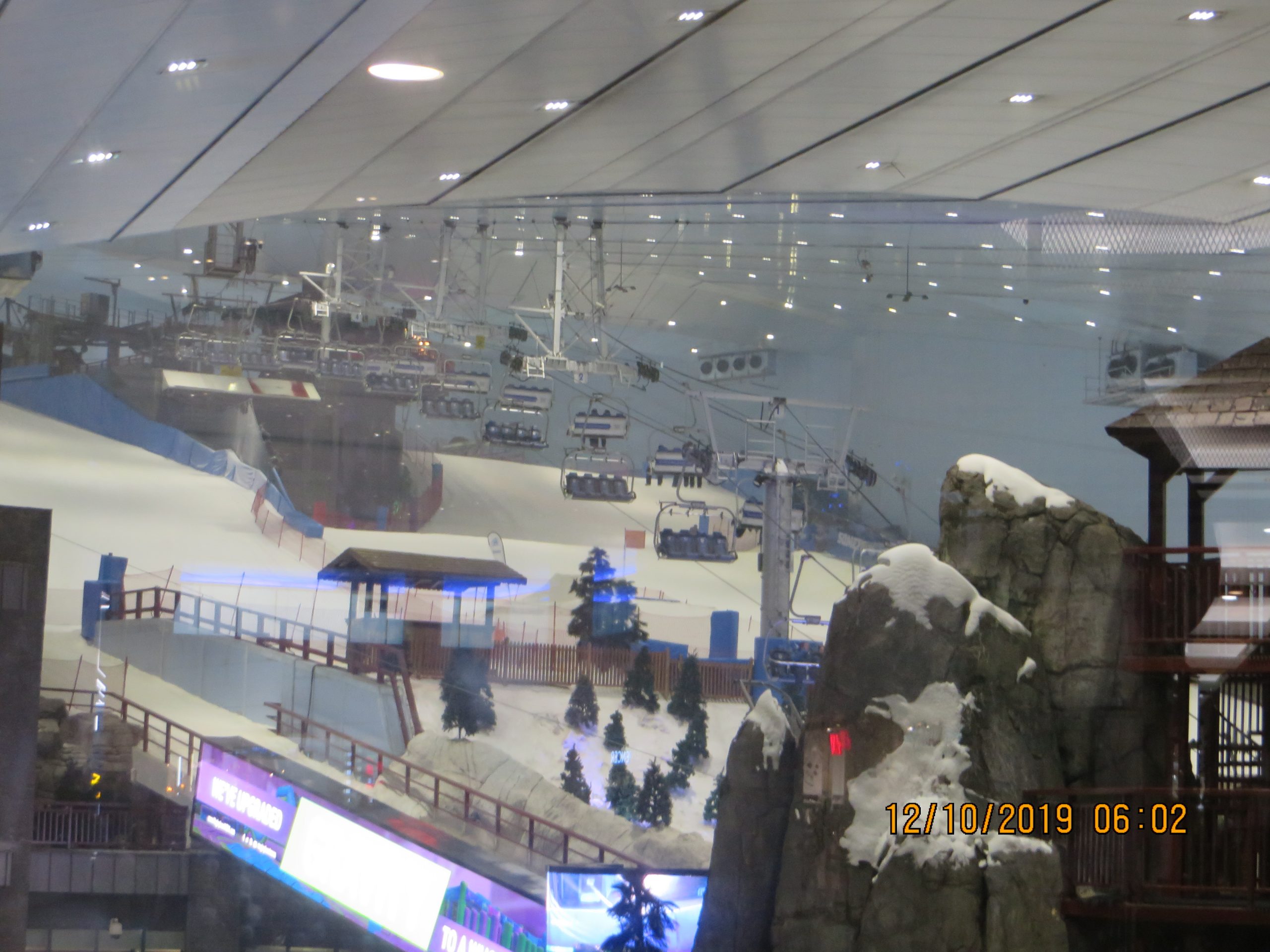 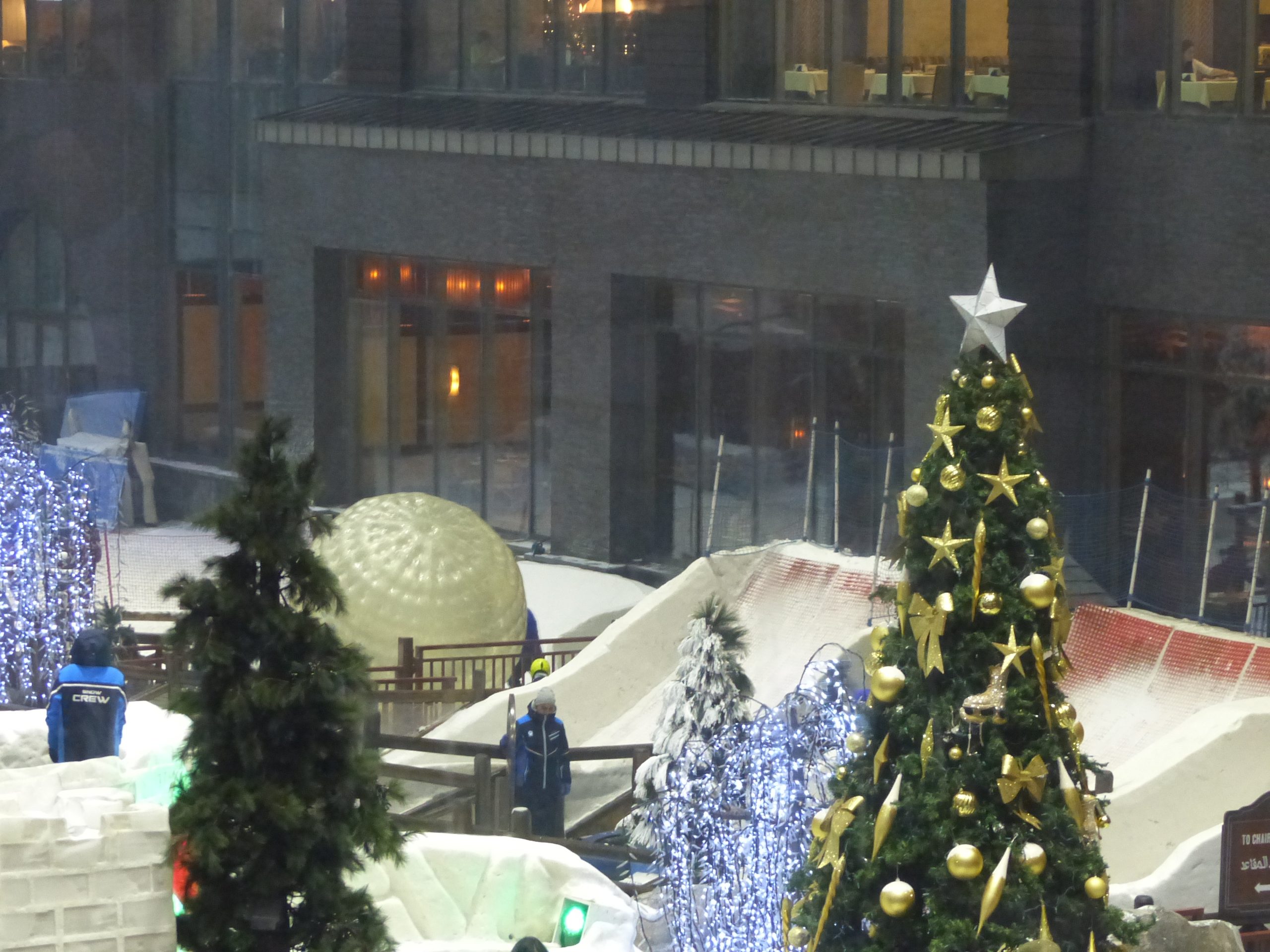 So here we are at the end of a great journey. It is ending the way they always end and that is a good thing. We are tired but happy to have had the privilege to see more of this wonderful world and meet more of its wonderful people. And, yes, we are already talking about the next adventure.