When I was a kid, I was afraid of quicksand. I don’t think I was the only one in the ‘hood that harbored that fear. I can only attribute this weird preoccupation to old cowboy shows on television. Seems like there was always a cowboy getting sucked down with arms outstretched yelling for help. (Rick argues that I am mistaken; he says that it was characters on “Tarzan” who were always falling in quicksand, not cowboys.) I also dreamed of stumbling upon an Indian mound. I am clueless as to where my tiny brain came up with this idea, but it never happened. I just don’t think that many native Americans ever inhabited the south side of Aiken. If so, they took their stuff with them when they went to the happy hunting grounds in the sky. They sure didn’t leave it in a big pile for me to discover. And another thing: after I grew up, I found that quicksand turned out not to be nearly the problem I had envisioned. Up until now, I have never seen either an Indian mound or quicksand. All that changed Tuesday  and I am happy to report that we did not fall into quicksand, but we did see Indian mounds. While driving from Hot Springs, Arkansas to Jackson, Mississippi, we stopped at Poverty Point in northeast Louisiana on the recommendation of friends. The site is called Poverty Point because that was the name of a large plantation that occupied the land beginning around 1850.

Louisiana has the oldest earthen mounds in North America. Although there are archeological sites in this state that are older than Poverty Point, this site is significant for several reasons. In 1400 BC, it was the largest mound complex in North America. It has been called the “New York City” of that period in time. It is thought that construction began around 1650 BC. The native Americans who created it had no tools other than their hands and the baskets they made, yet they managed to move about 390,000 tons of dirt by basket alone just for Mound A. This mound was the largest earthen construction for 2000 years after it was finished. Mound A rises seventy two feet above the original surrounding surface level. At its base, the mound roughly measures 710 feet by 660 feet. There are six mounds in the complex as well as the system of ridges laid out in a pattern of six concentric C-shaped rings with a huge inner central plaza. To do all of this work, it is estimated to have required moving about 100 million fifty pound baskets of soil. With no written record, archeologists can only make educated guesses as to the purpose of the mounds. These mounds are not burial sites, but it is thought that perhaps they were used for ceremonies. It has also been theorized that the size of the mounds communicated power and strength to other native Americans in the area. Think “king of the hill.” Archeologists believe that it would take several hundred to a few thousand people to construct this monumental earthen project. 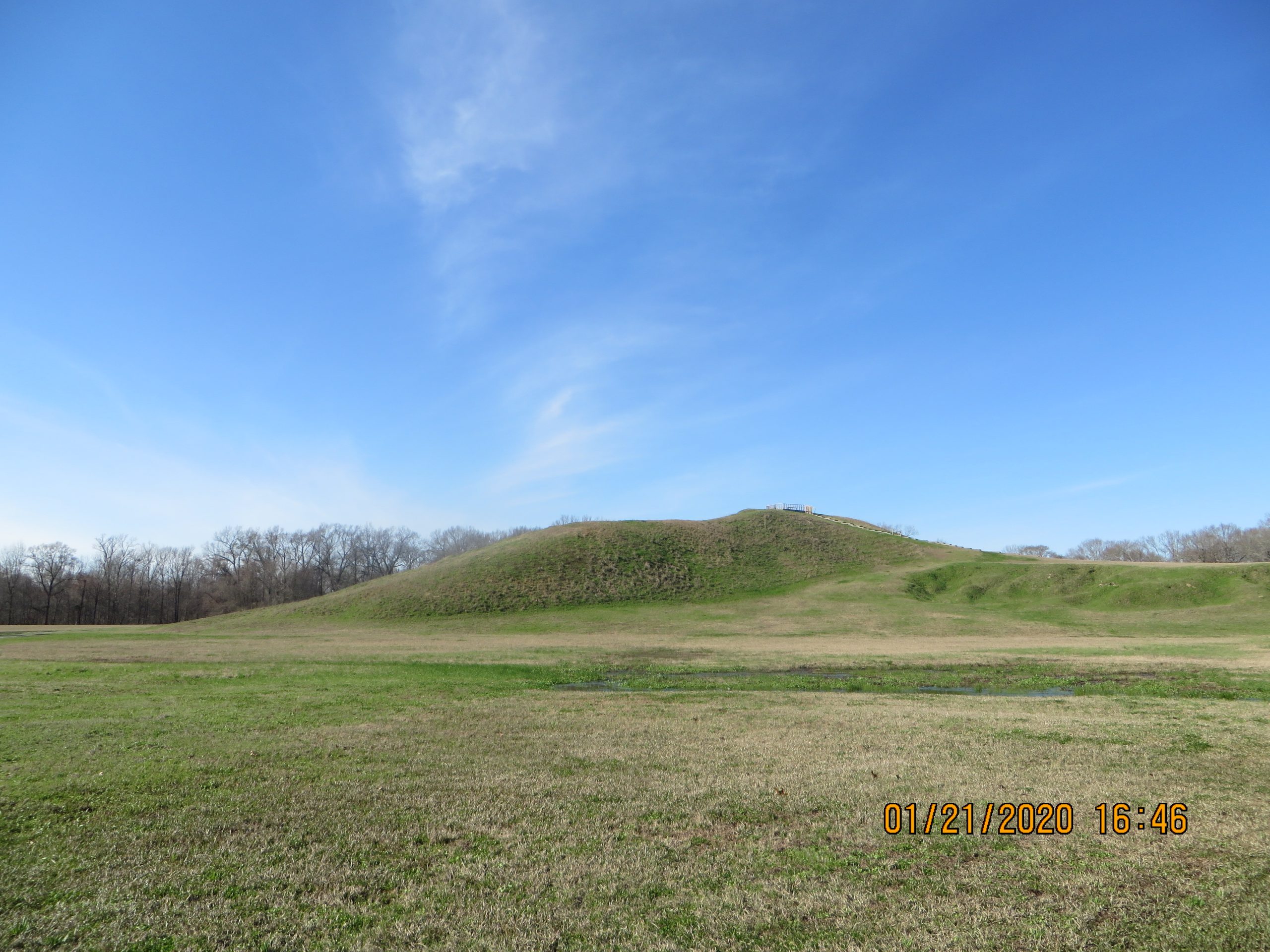 The complexity of the site suggests a highly organized society. These people were fishers-hunter-gatherers; there is no evidence that they grew crops, but lived on the abundant wildlife in the area and the aquatic bounty from the Macon Bayou which is adjacent to the site. Stone is not indigenous to the area and there is evidence that these people traded far and wide for the stone they needed to make spearheads, weights for fishing nets, and other items used in their daily life. Artifacts suggest that their trading network reached as far away as the Great Lakes. 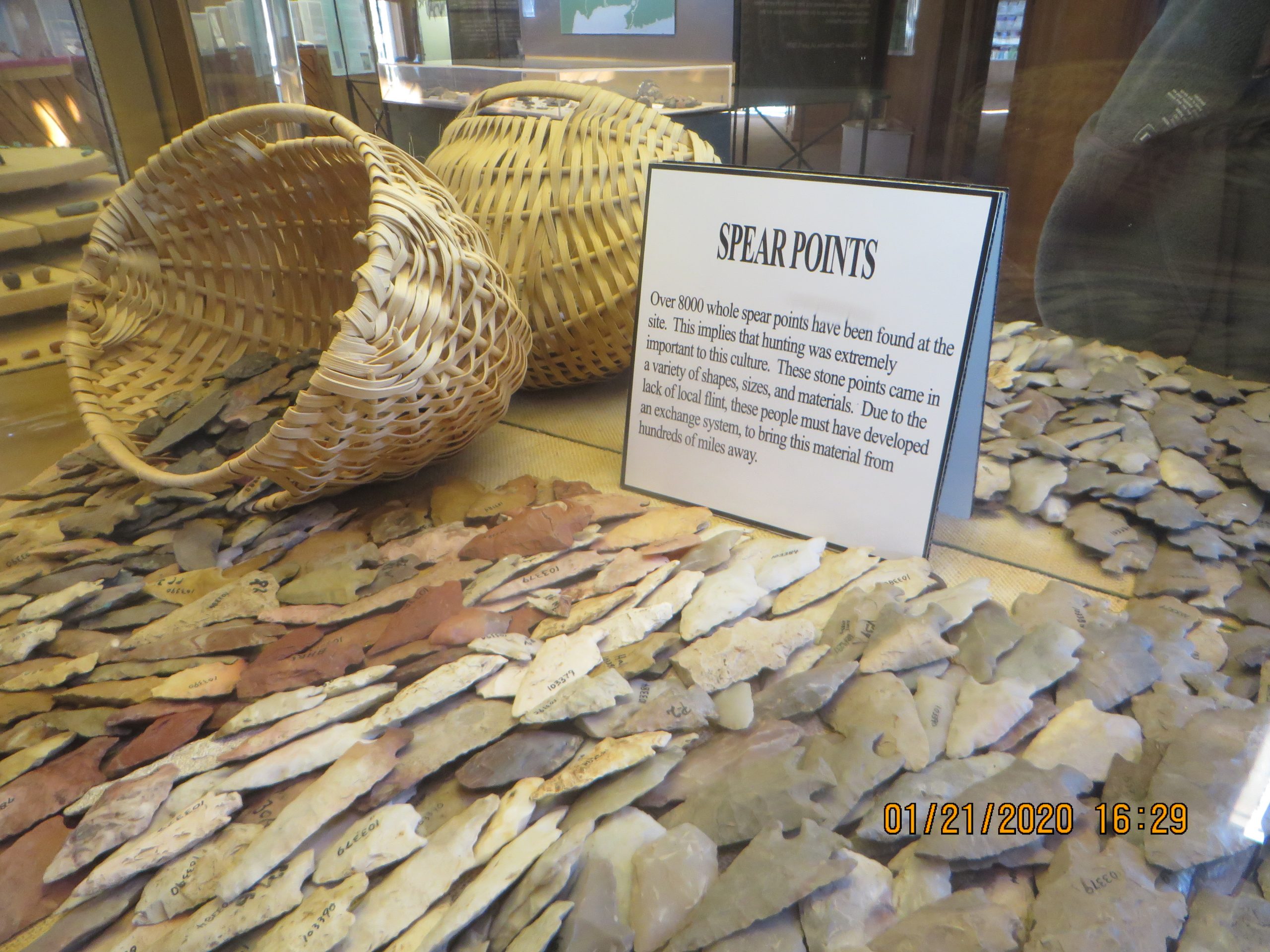 Above and below are some of the artifacts from the site. 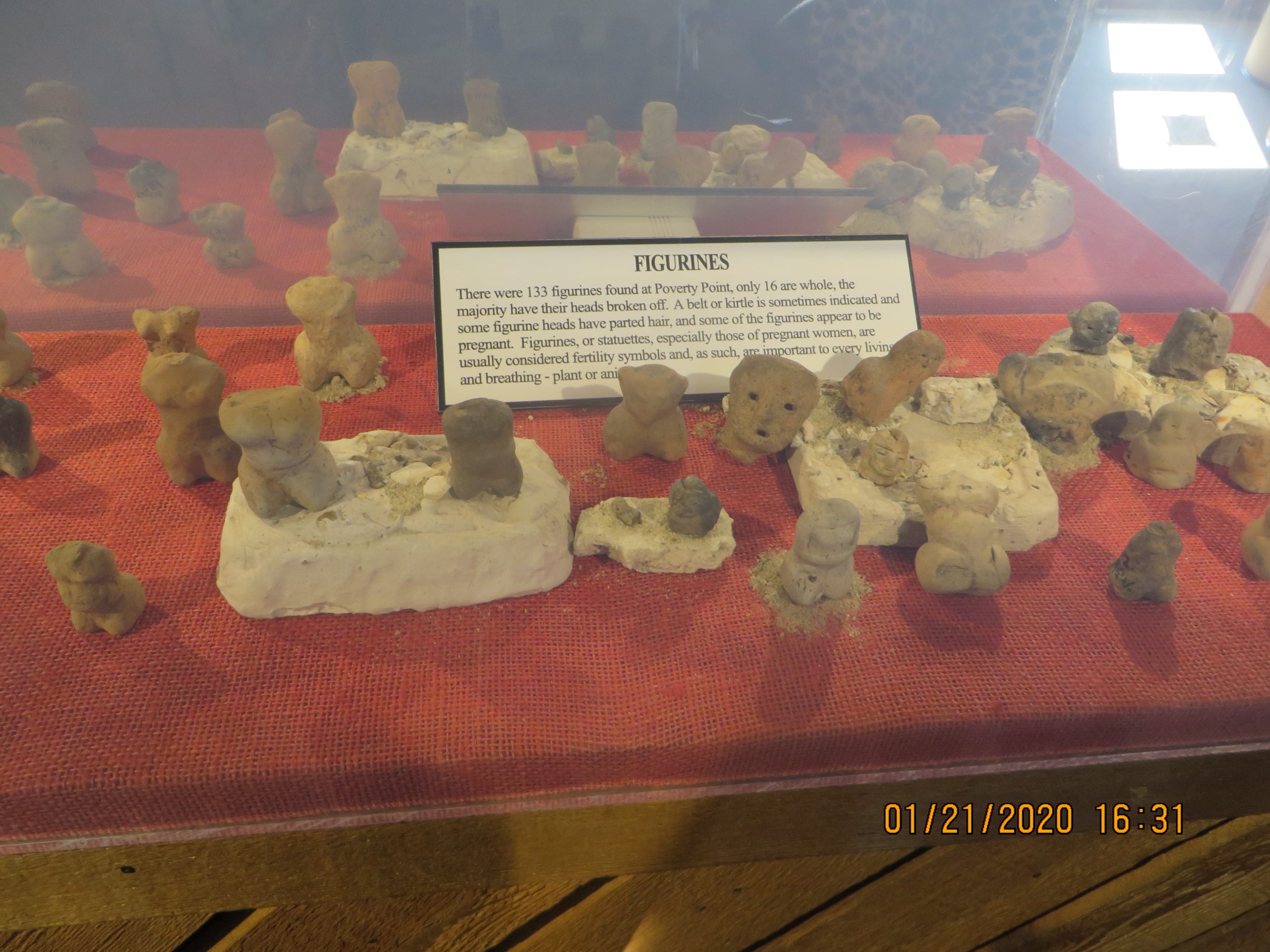 No one knows why the site was abandoned, but it has been suggested that possibly there was a change in the climate around 1100 BC that resulted in severe flooding in the lower Mississippi Valley. Severe flooding would have disrupted their way of life because they depended on the waterways for trade and transportation. Also, much of their food supply was supported by the floodplain environment and this could have been altered by flooding.

After all these years, it was great to stumble upon a mound, even if it did require hours of driving to stumble upon it. Poverty Point is indeed an enigma, and although no one knows why the native Americans abandoned it, after seeing the area and walking around it, we feel reasonably certain that they did not fall into quicksand.