“Three hundred years ago, wealthy young Englishmen began taking a post-Oxbridge trek through France and Italy in search of art, culture and the roots of Western civilization. With nearly unlimited funds, aristocratic connections and months (or years) to roam, they commissioned paintings, perfected their language skills and mingled with the upper crust of the Continent.”               —–The New York Times, 2008 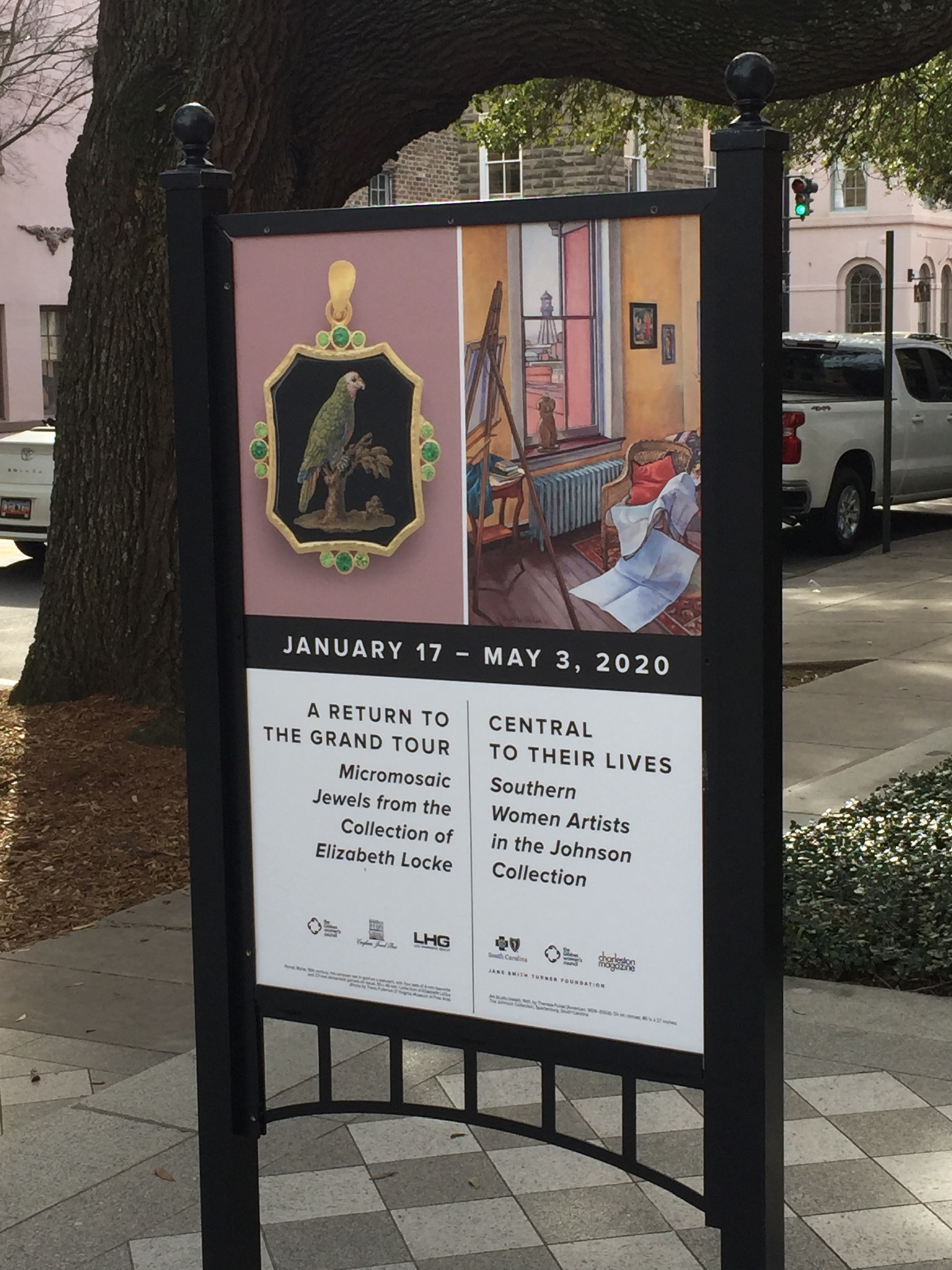 Who says you have to travel for hours and spend a ton of money for really interesting travel adventures? We spent less than twenty four hours in Charleston this week and took in an exhibit that melded a few of my favorite things: travel, art, and jewelry.  We drove up to the Holy City to see a fabulous exhibit at the Gibbes Museum of Art called “A Return to the Grand Tour: Micromosaic Jewels from the Collection of Elizabeth Locke.” The Virginia Museum of Fine Arts in Richmond organized the exhibit and it will be in Charleston until early May.

The gaps in my education are well documented on this website, so no one will be surprised that I knew very little about The Grand Tour before this week. Of course, I knew that wealthy folks the world over have traveled extensively throughout Europe for centuries, but I did not realize that the custom was a traditional rite of passage for upper class young men and later, wealthy young women. Young men often traveled under the supervision of a tutor. The young women often traveled with a spinster aunt to keep things respectable. The aristocratic youth could sow their wild oats far from home without being an embarrassment and bother to their families. But the aristocracy of all ages embarked on the journey, and an established itinerary evolved that included all the “must see” sights of the Continent. Indeed, travel books came into being to guide these travelers on their fabulous journeys as well as to regale them with accounts of the wonderful experiences they could anticipate.  The Gibbes exhibit has a section that highlights a couple from Charleston who traveled extensively. Their guide book is on display (and shown below) along with their portrait that was painted in England at the beginning of their Grand Tour around 1774. 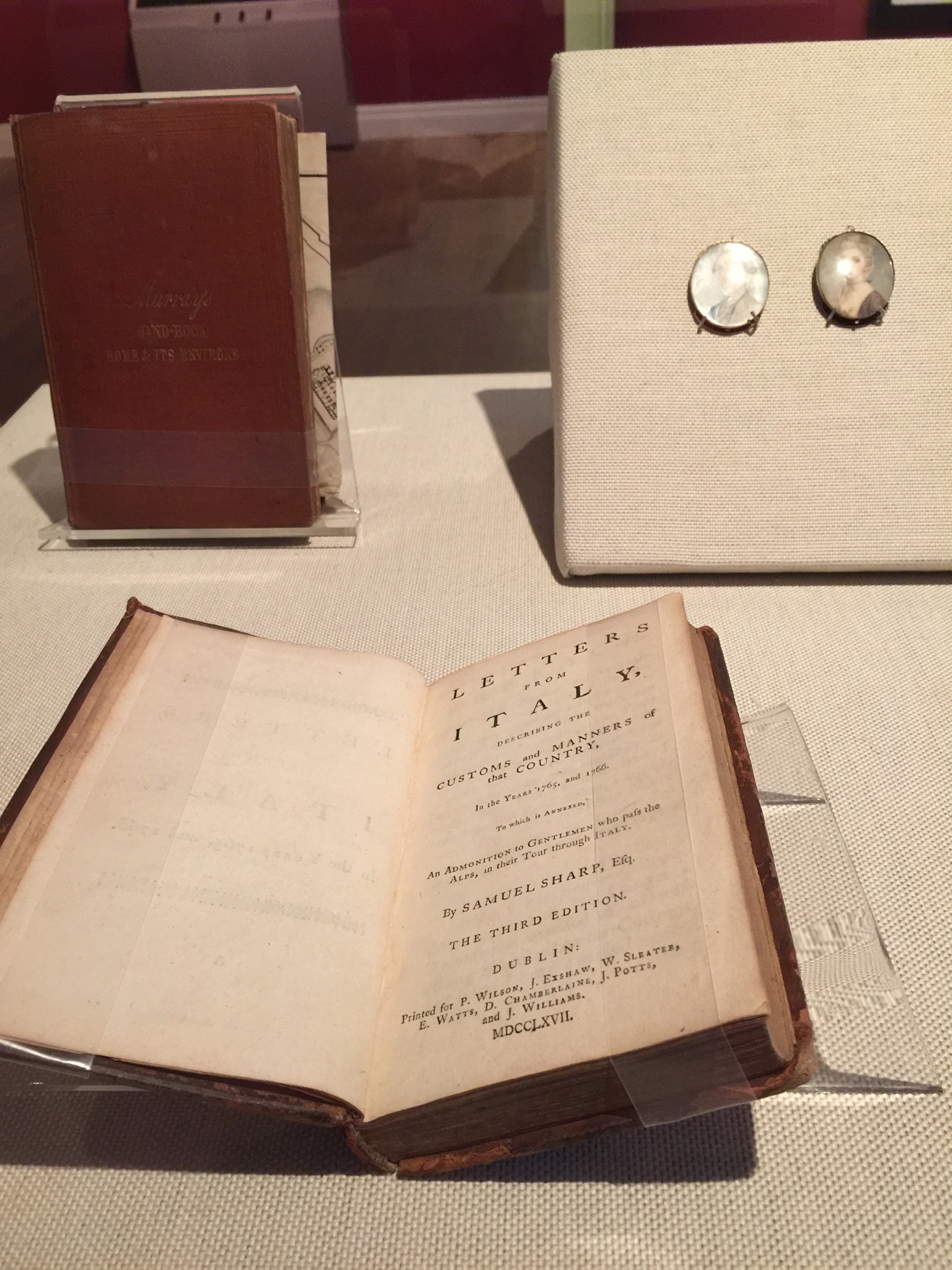 I was surprised to learn that it was expected for travelers to be away as long as three and a half years. Travel to France and Italy were not to be missed. Hiring a French-speaking guide was a necessity as French was the dominant language of Europe’s elite during the 1600s and 1700s and no Grand Tour was complete without travel to Paris for exposure to a level of refinement only the French were thought to possess. Also, time spent experiencing Italy, the de facto epicenter of art and sculpture at the time, was de rigueur for the young bon vivant in need of burnishing his street cred as a refined and educated leader in high society when he returned. Of course, the nationality of the traveler impacted the route taken; the starting point played into where the privileged young traveler headed first. Travel was undertaken by carriage and by riverboat where needed and available. Traveling in difficult places, crossing the Alps, for example, might require dismantling the carriage. The ultra wealthy young gentleman might have servants to carry him over the rugged terrain. With the advent of train travel, Germany and Switzerland made their onto the circuit map. Trains also served to democratize the experience since the “less fortunate” (tongue held firmly in cheek here) could undertake travel for the first time. That was probably about the time that the Grand Tour began to gradually be winnowed down to “only” two years.

Often, these Grand Tours ended with a nice long sojourn in Italy, and like all travelers throughout time, the grand tourists wanted to bring home souvenirs from their travels, both as mementos for themselves and as gifts. (How many times have you come to the end of your journey and had to grab a few quick gifts on your way back home?) Also, it was a good idea to bring home some art and maybe pick up a sculpture to adorn one’s parlor upon return. I think we call them “conversation pieces.” What better way to impress the folks back home than to invite them over and run on and on about your experiences and treasures? Now you can just send your photos on Facebook and Instagram (and websites like this).

Lugging home large treasures could become cumbersome towards the end of a long tour, especially for the servants.  Micromosaics became popular as an easily transportable memento and were sure to thrill one’s relatives and friends back home. With increasing demand for these objets d’art, the number of micromosaicists grew. There was a wide range of quality, but the Vatican Mosaic Studio was the go-to source for the creme de la creme in micromosaics. The process started with very thin threads of enamel that were broken into tiny bits called tesserae.  A surface was prepared with an adhesive that dried slowly and the tesserae were carefully placed side by side. The artists used different shades of tesserae as a painter would use different shades of oil or watercolor to create the image desired. Instead of using a paint brush, the micromosaicist used tweezers. Jeweler Elizabeth Locke became fascinated with these beautiful pieces and created the wearable works of art that are at the core of this wonderful exhibit. The exhibit explains in more detail the history of micromosaics and there are plenty of magnifying glasses to facilitate a closer look at these lovely diminutive pieces. The exhibit transports visitors to another era. The micromosaics are truly works of art and Elizabeth Locke has taken them to a new level with her incredible talent for gilding the lily. 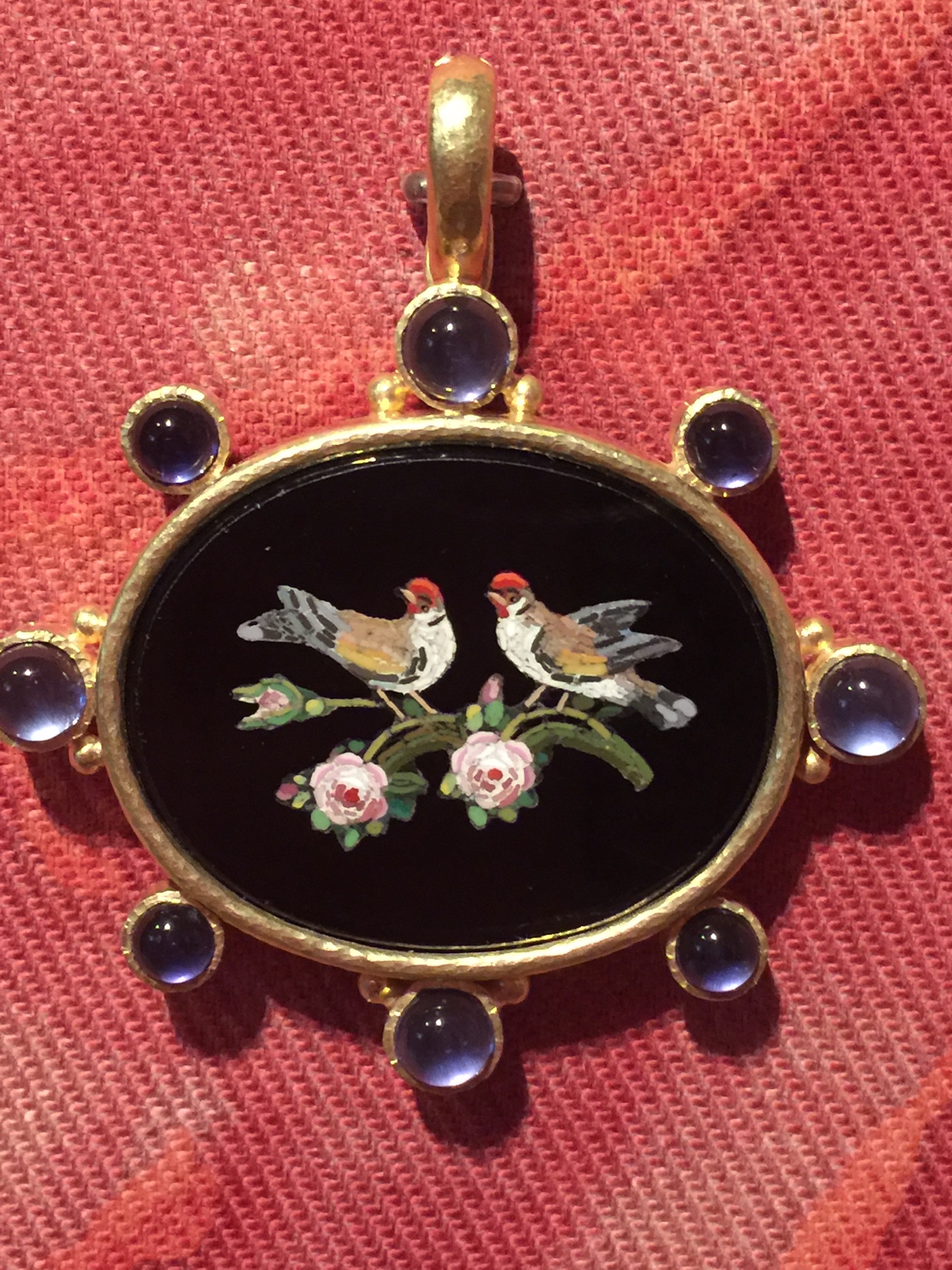 The artists created many pieces using birds and animal motifs. 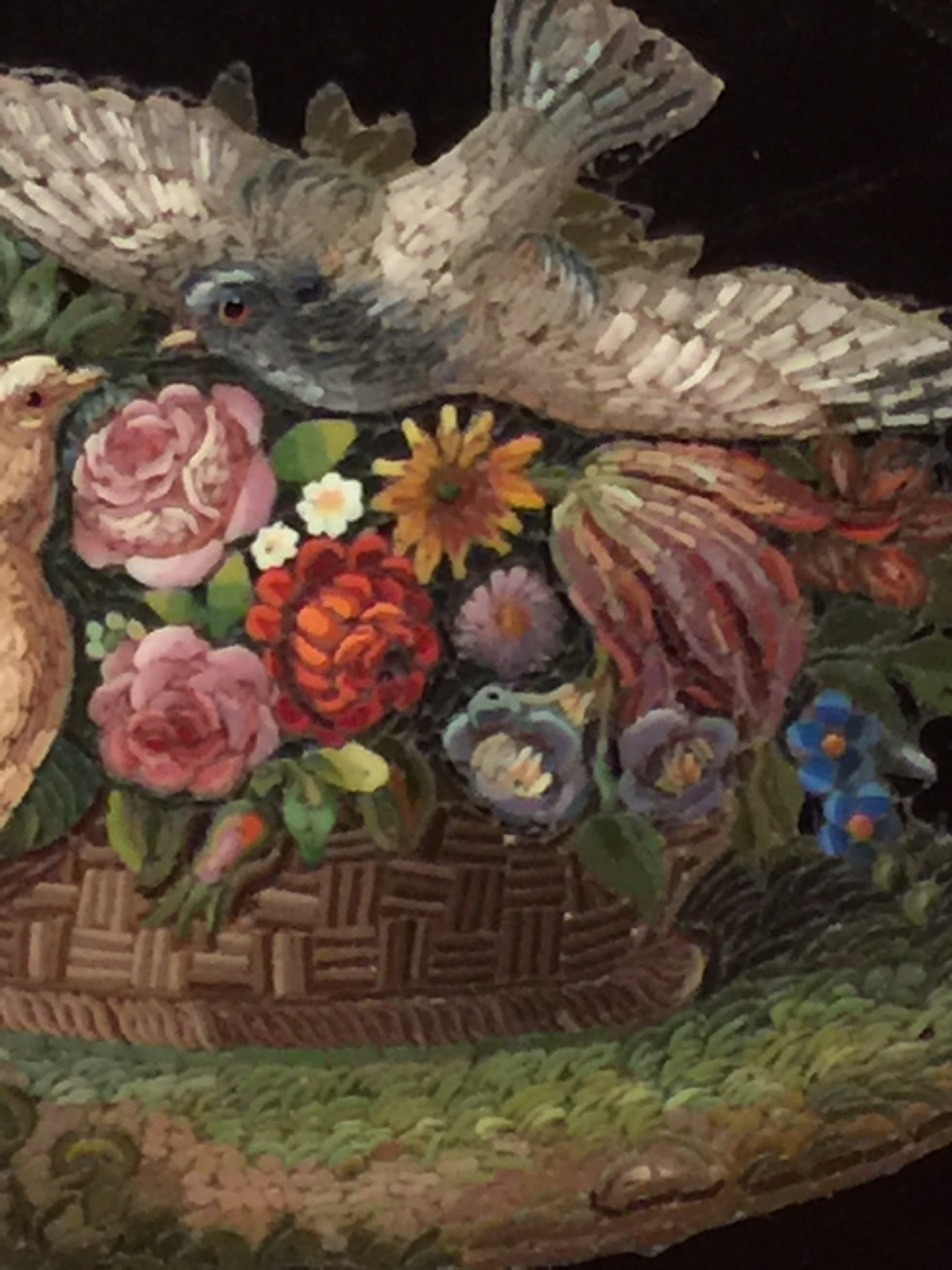 A close up view. 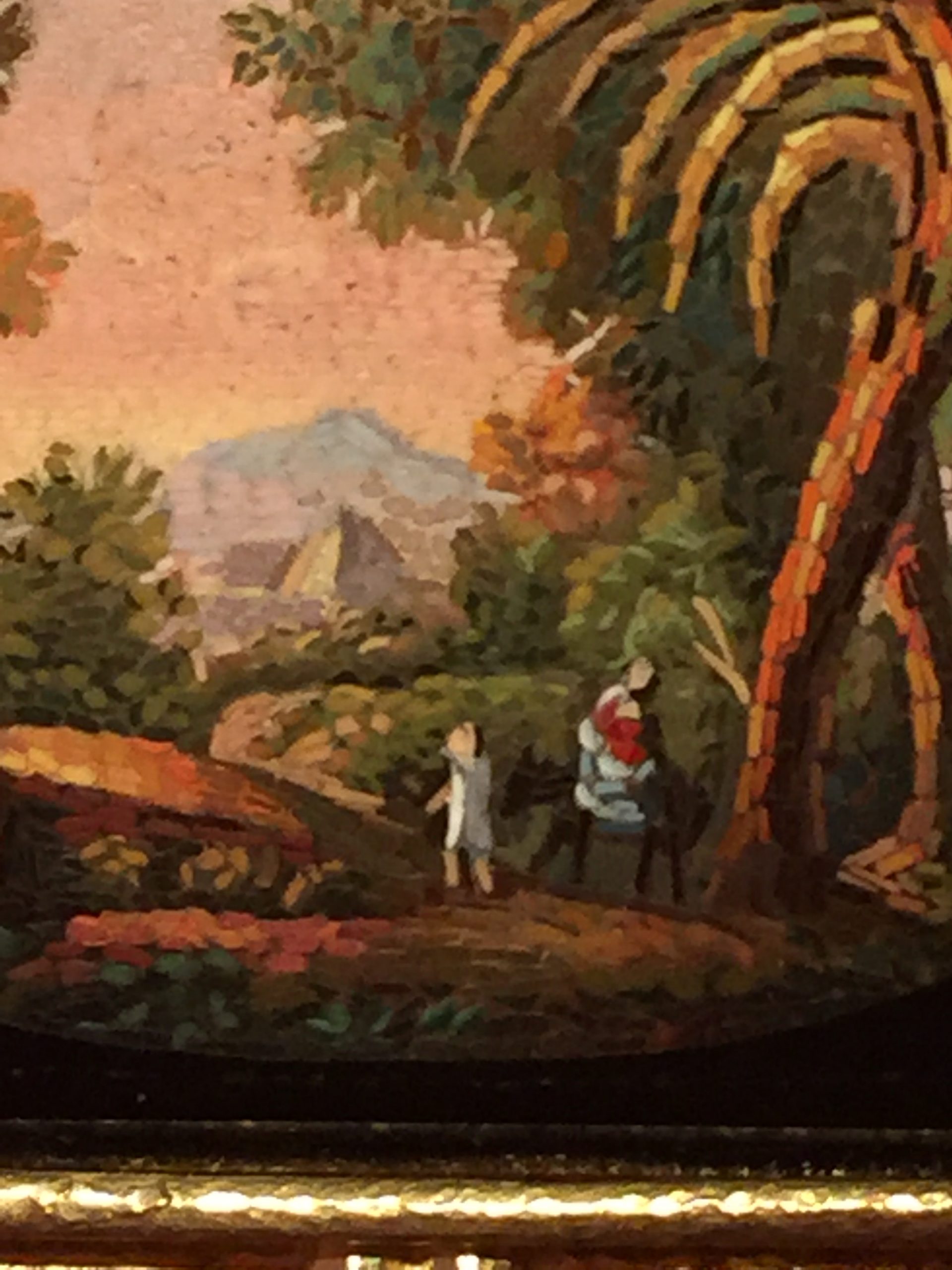 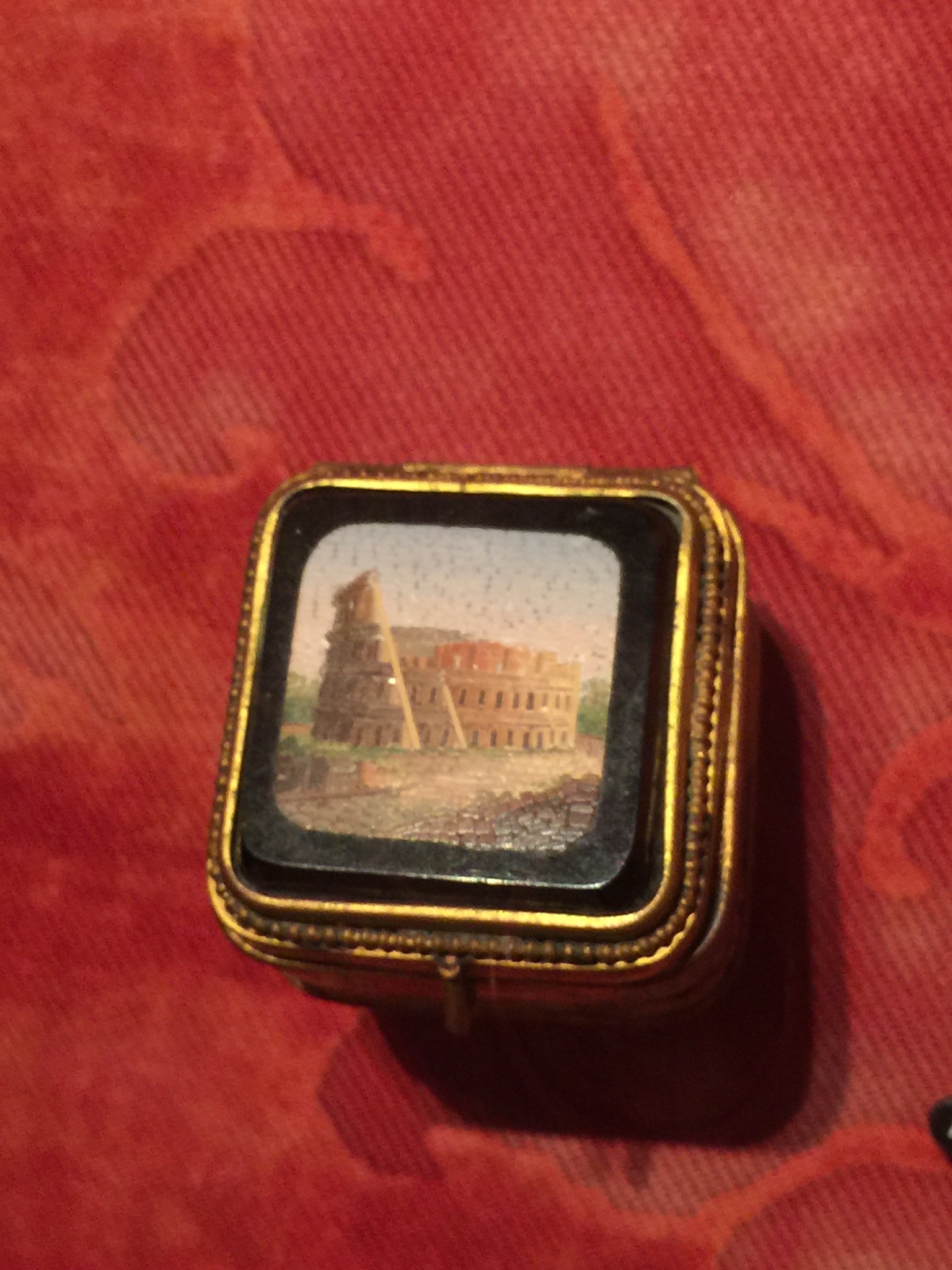 The Roman Colosseum adorns this pill box. Scenes from the Vatican were popular as were other Rome landmarks. 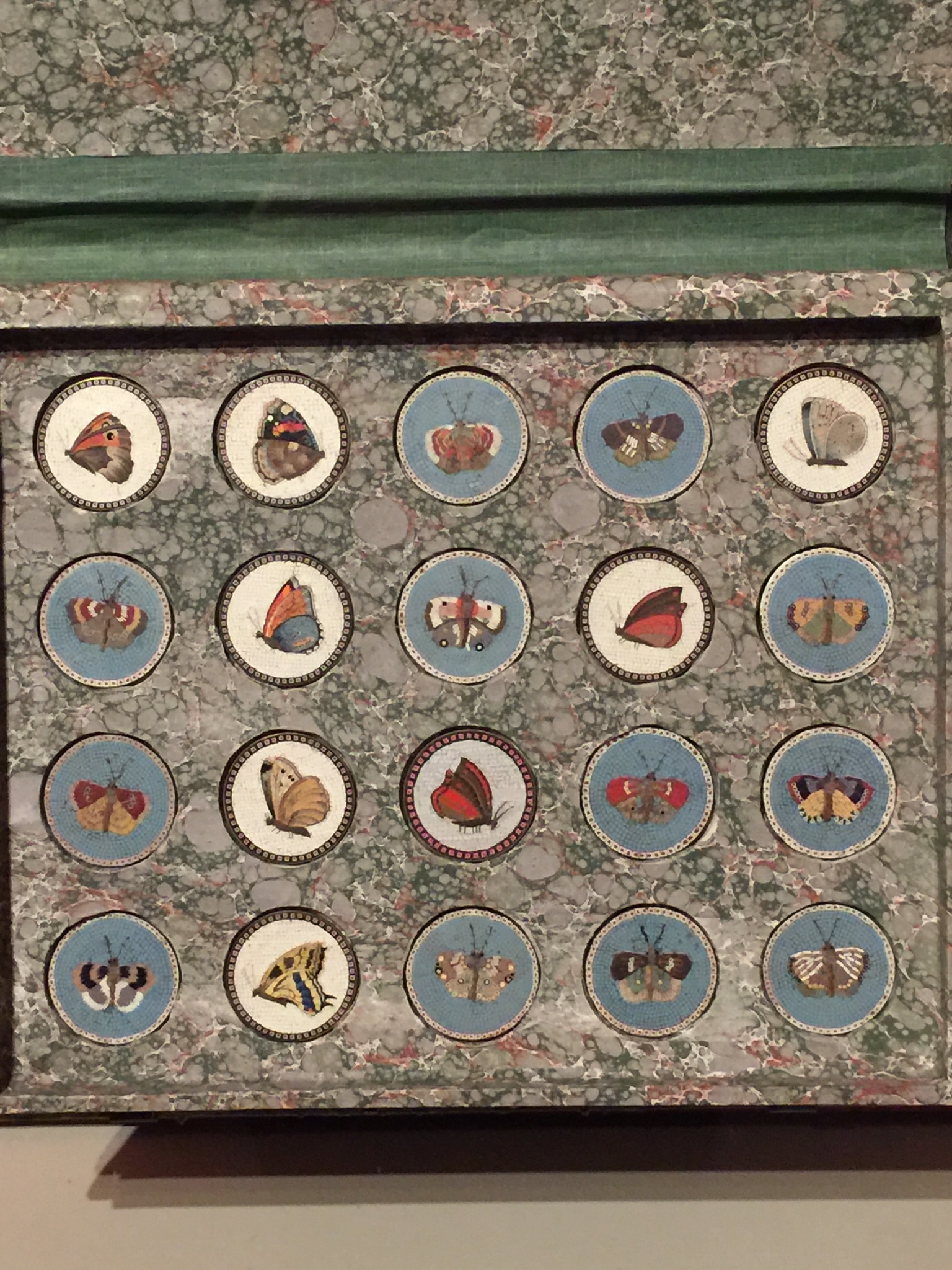 This set must have been inspired by a love of entomology. 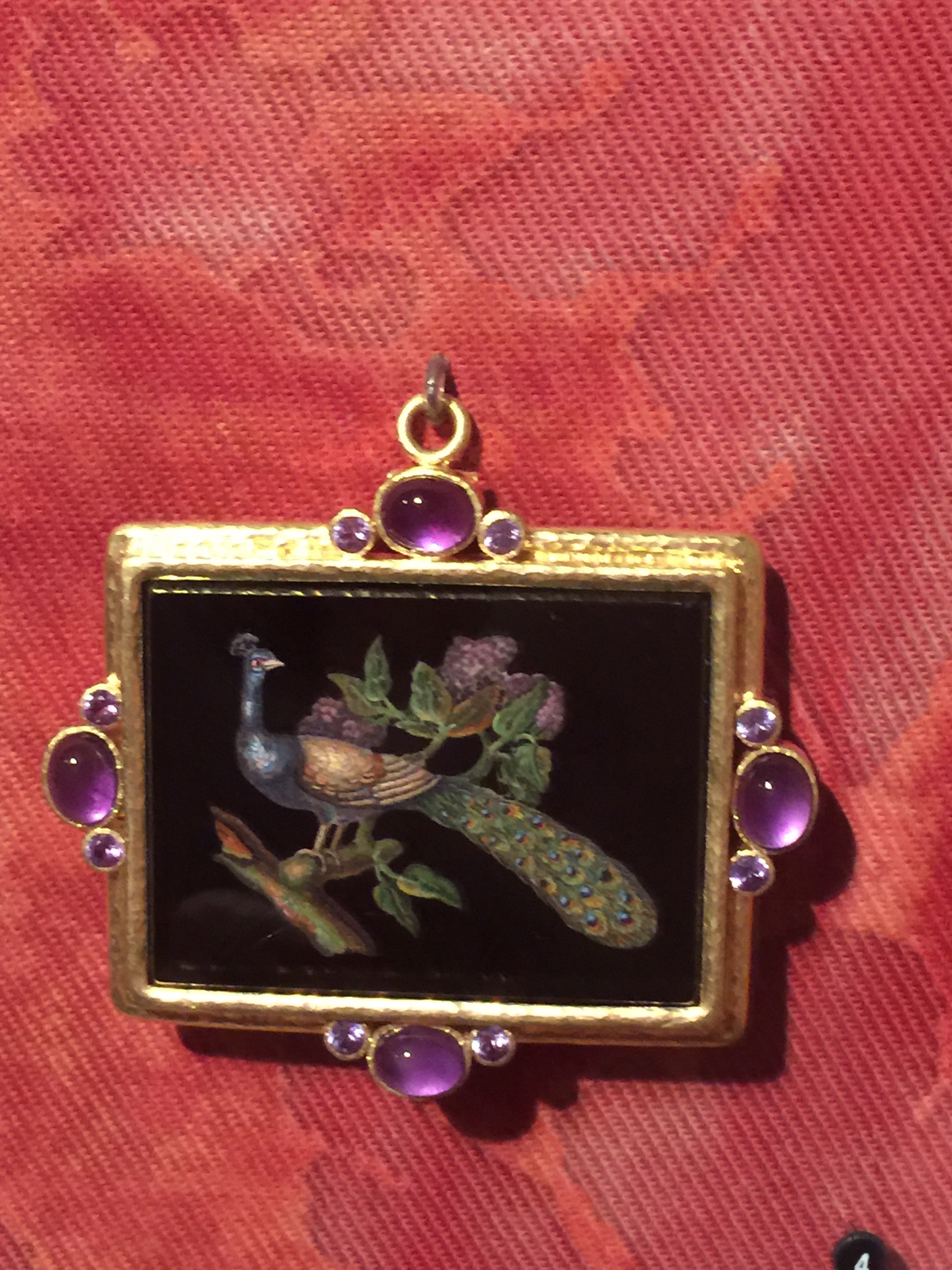 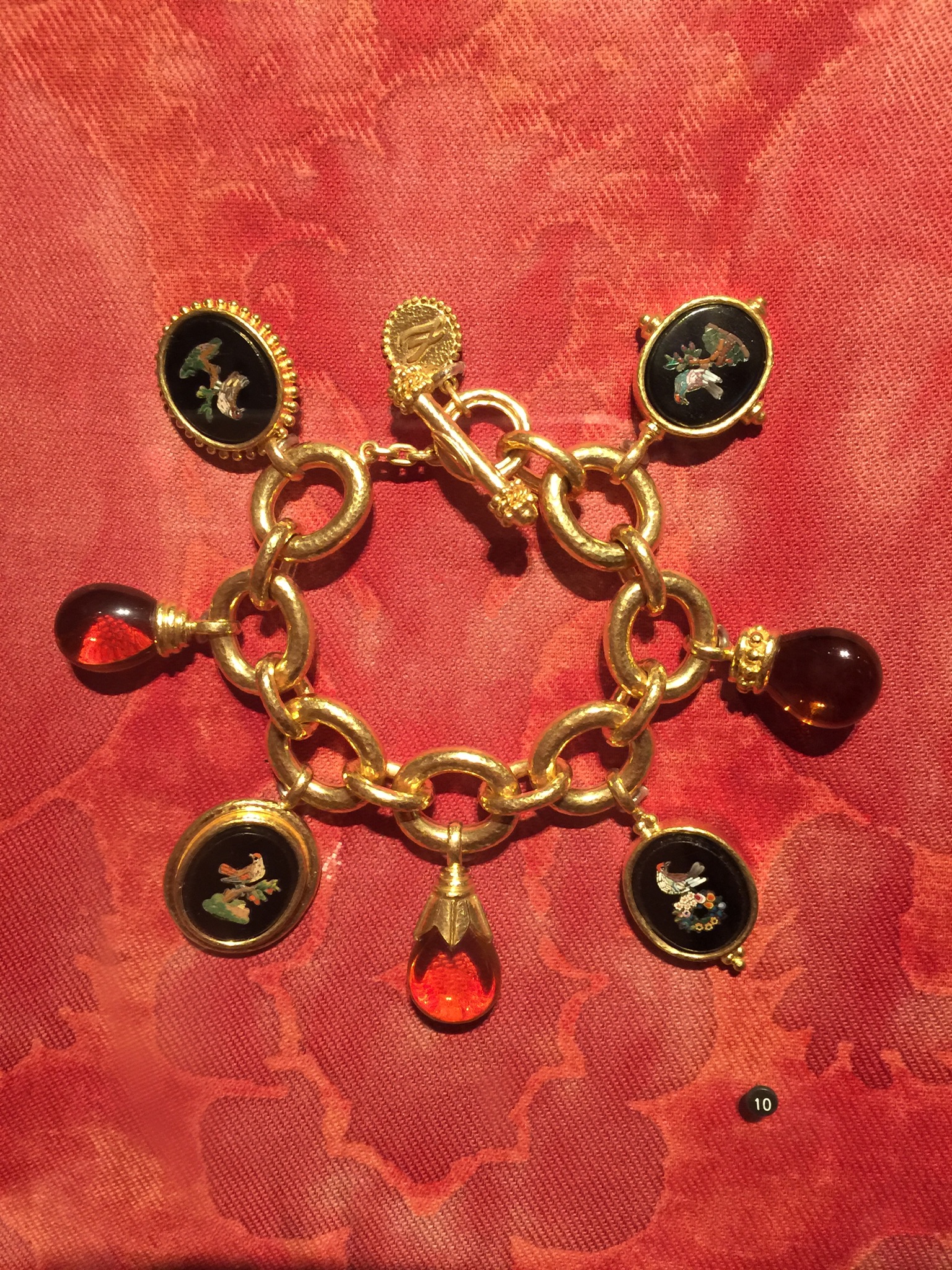