Postcards from a Pandemic

It seems like we are riding way up on the crest of a wave. We have the impression that the world is losing its collective mind over this Coronavirus and anyone traveling right now is surfing along in uncharted, roiling waters. To be honest, I expect it to come crashing down one way or the other pretty soon, probably before we return from this trip. I predict we will see one or the other of two scenarios play out: Either the media is screwing with us again in the style of a classic hurricane frenzy known all too well by those of us living on the coast, or humanity is about to get screwed by a virus the Chinese hid from the rest of the world far too long. On the other hand, we could see some of both, I suppose.

I think it might be a good idea to do “mini-blogs” or snapshots, so to speak, on the subject as we go along since we will be covering a rather large chunk of the globe during March. We will share what we see as we see it. I will start out in this vein and forsake it if it peters out or else stay with it if it looks worthwhile from an information standpoint.

So, let’s get started at the beginning of our journey. The scene Sunday morning at the Charlotte Douglas International Airport was completely “business as usual.” No industrial size canisters of hand sanitizer all over the place, no signs telling us not to touch our face, and only two people wearing masks. The American Airlines Admiral’s Club lounge was as it always is: help yourself to whatever food you want. I expected masked, gloved servers dishing up scrambled eggs and oatmeal. Nope, not a one. Completely DIY.

The flight to San Francisco was just like any other flight. We heard not even a whisper about Covid-19. I did enjoy reading all the work-related emails on the laptop of the man seated in the row in front of us. It was an entertaining way to pass the time. The CFO of his company sent out a meandering stream of consciousness email on the subject of Covid-19. He is mulling over the idea of buying everyone a laptop so that they can WFH. (That stands for “work from home” at his company.) He is looking to drop about a quarter of a million to accomplish this task. (He’s kidding, right?) I wonder if China can send that many laptops over right now. (Last I heard, they had other fish to fry.) He considered having employees bring their kids to work if schools are closed, but abandoned this strategy. That was a wise decision, I think, and just the fact that the idea crossed his mind makes me feel pretty sure that the CFO doesn’t have children. I mean, seriously, why do people go to work if not to get away from the kids, right?

The San Francisco airport has all the same precautions in place as the Charlotte airport. By that, I mean none. I saw a few random people wearing masks, but no more that any other day. We spotted a couple of young women wearing fabric masks that looked less like a means of disease prevention and like more like a fashion statement. Again, the American Airline lounge was the same as always. Ditto the Quantas lounge. We also surveyed the Cathay Pacific lounge and found essentially the same thing, only with better food. (OK, we had loads of time and privileges to the lounges of several airline brands so we did a little lounge hopping.) Nobody is worried about anything except charging their “devices” and getting where they are going. I will admit right now that I have no photos relevant to this post since we saw no one in hazmat suits anywhere, so I will show you the lovely bowl of noodles we shared in the Cathay Pacific lounge. Much nicer than an airport scene, dontcha think?

The flight attendant on our Qantas flight from San Francisco to Sydney made an announcement about Coronavirus as we landed in Sydney and there was a poster in the hallway as we transited for our onward flight to Auckland. Lots of Chinese in the airport were wearing masks, but again, that’s not unusual for them.

Our flight from Sydney to Auckland seemed to be missing a lot of people. In fact, I asked the flight attendant if we were in “Time Out” because, in our sixteen passenger section of Business Class in this Boeing 787 Dreamliner, there were only three of us. Upon arrival, New Zealand authorities were squirting hand sanitizer on everyone and there were more signs in the terminal about Covid-19 symptoms. The hotel in Auckland has an abundance of hand sanitizer around but that’s about all the evidence we see of their concern. People are dining and drinking and partying just like always. It remains to be seen if the cruise ship will be at capacity on March 13 when we set sail. 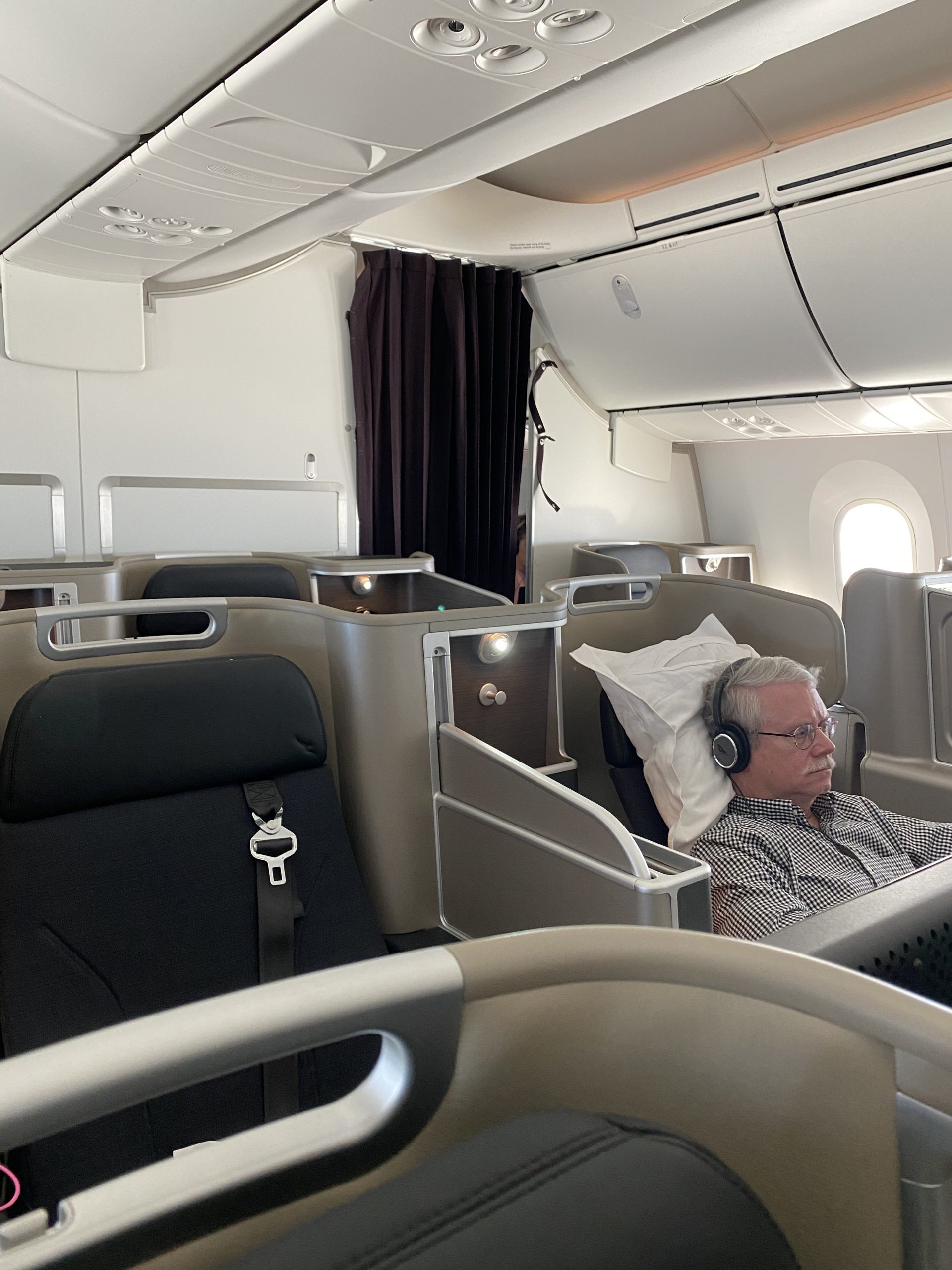 The traveling public doesn’t seem to be nearly as hysterical as the pundits and talking heads are. It’s surreal to be sitting in an airport watching everyone go by just like any other day while the CNN staff on the airport television is out on a window ledge trying desperately to whip us into a frenzy as fevered as theirs. The media might need to up their game and look for more weapons-grade fuel to throw on the panic fire. As hard as they are trying, it still doesn’t look like anyone is buying what they are trying to sell. Sure, Covid-19 is a real problem, but what we are witnessing daily on television is some gale force disinformation compared to what the traveling public is experiencing. I may change my opinion as we go along and I will be the first to admit if I am wrong. No, I take that back. Rick will be the first to admit it.