“I am in this electric chair not for what I done, but for what somebody else done . . . I am about to go to eternity and I have made peace with my God. Facing eternity, I would not dare tell a lie, for I know, and you know, that nothing can save me from death in this chair. A lie now would do me no good . . .” Alex Weldon, executed and buried in the penitentiary cemetery in 1912. His last words, above, were printed in the August 14, 1912 edition of The State newspaper.

I get it. Travel is out of the question right now. Who, in their right mind, would have ever imagined that we would ever have found ourselves in this predicament? The Covid-19 pandemic has forced the closing of all parks, libraries, museums – everything is closed, so even “traveling locally,” as I call it, is not much of an option. I keep receiving emails from travel companies urging me to have great travel experiences online. I wish. I tried watching fish on a reef somewhere via an underwater camera. Sadly, it didn’t work for me. It just wasn’t the same, especially since we were supposed to actually be underwater watching marine life in the South Pacific in March.

We were stricken with a bad case of cabin fever and had to get out and see something, so we drove over to Elmwood Cemetery in Columbia. Like hundreds of thousands of people, we have sped by the old cemetery too many times to count heading into and out of Columbia on I-126. This time, we drove all through the place once called “Cemetery Hill.” One thing is certain about a cemetery: everyone is always practicing “social distancing.” We were at least six feet from anyone. Everyone else there was buried. Six feet of dirt is a pretty good social barrier.

Some twenty years ago, we signed up for a full moon tour of the cemetery that was offered by Historic Columbia. It was late summer, and as is often the case, thunderstorms rumbled through the area in the early evening and the event was canceled. For some reason, we just never got around to rescheduling. Without a guided tour this time, it took us two attempts to see the places we wanted to see in the cemetery. But, like many folks, we have lots of time on our hands right now. For a while, everywhere we turned, we saw the emergency alert “GO HOME. STAY HOME. TRAVEL ONLY FOR WORK & ESSENTIALS. VIRUS SPREADING IN ALL SC COUNTIES.” It was on television, it was on my phone, it was on those electronic billboards on the highways. I don’t even know what is plastered all over those the billboards now. Something designed to scare us, I presume. We are only supposed to leave to work.  That is, only if the work is deemed “essential.” I mean, really, isn’t work, no matter what you do, essential when you have a family to feed? The governor told us we could also leave to get food, get exercise, and visit family. Fine. We filed this adventure under “exercise” and walked around the cemetery.

Elmwood Cemetery was established in 1854. At the time, the property was considered to be on the outskirts of town. It is located on a bluff overlooking the Columbia Canal and Broad River. There are several areas that are really interesting historically in and around the 168 acre cemetery. On our first trip, we easily found the old Confederate Cemetery, the final resting place of over five hundred soldiers, many unknown. The flag of the Confederacy still flies here. Outside the gate of the Confederate Cemetery are the graves of Union soldiers who were killed in battle or became sick and died while serving in the area. 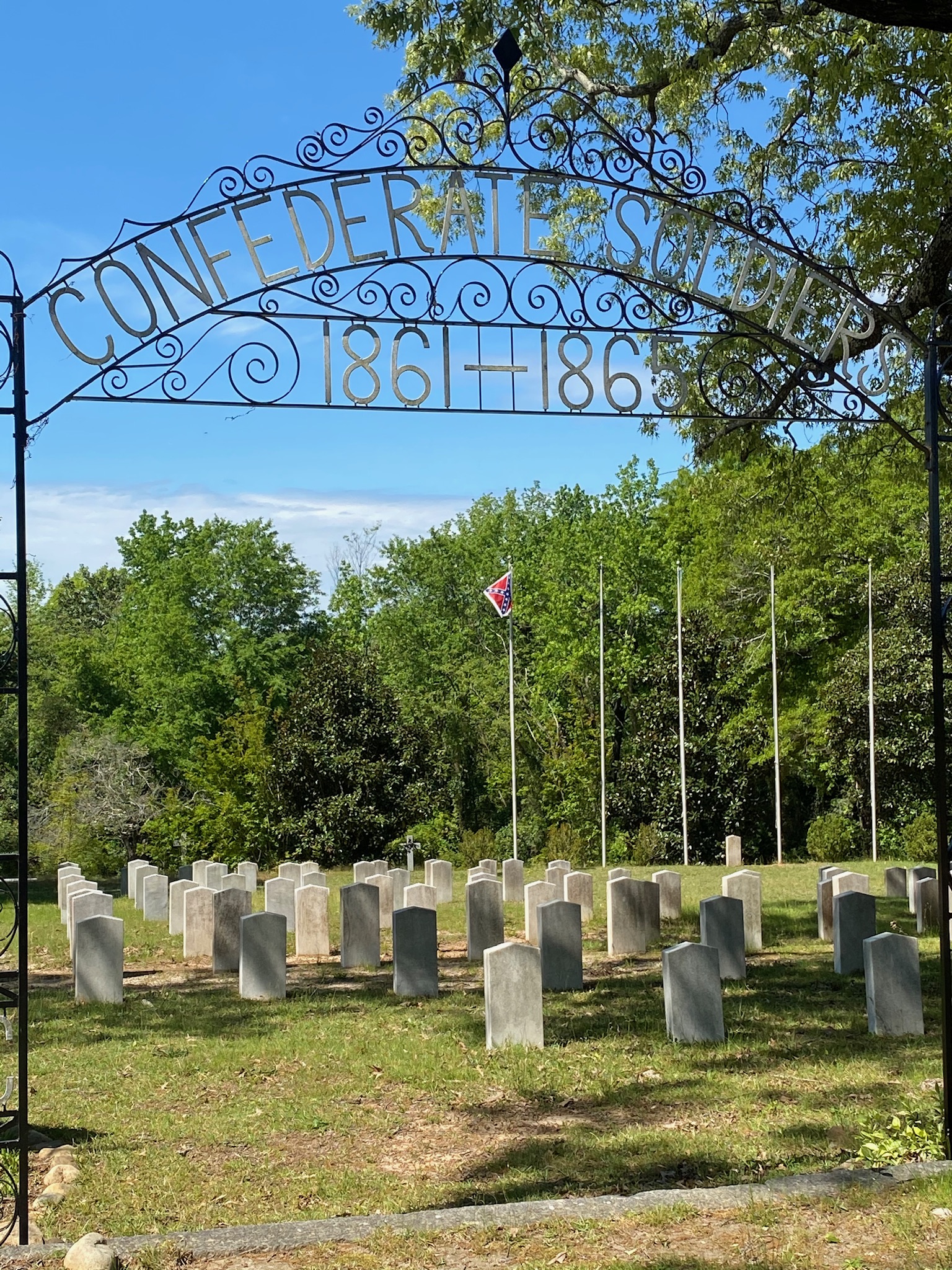 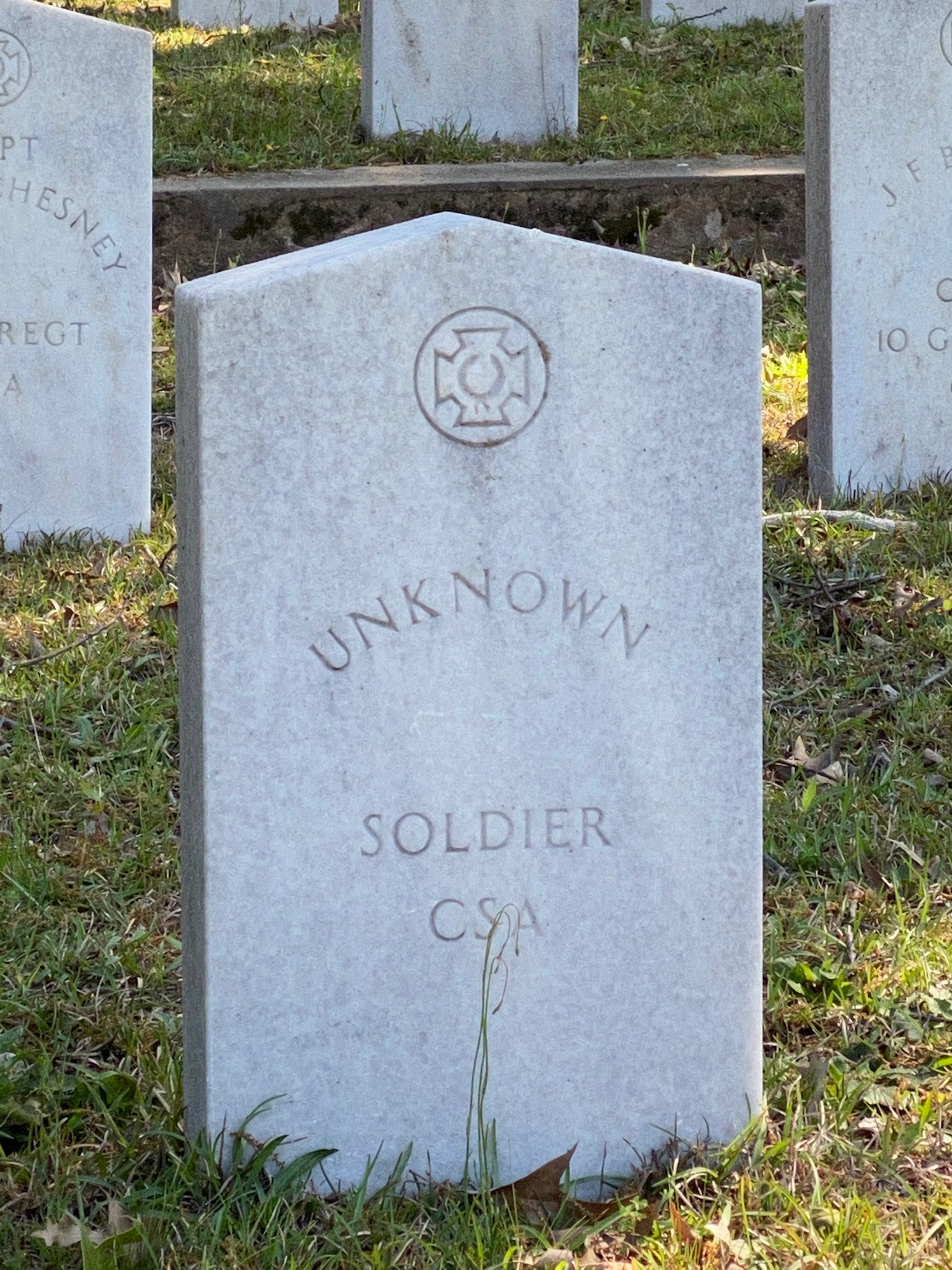 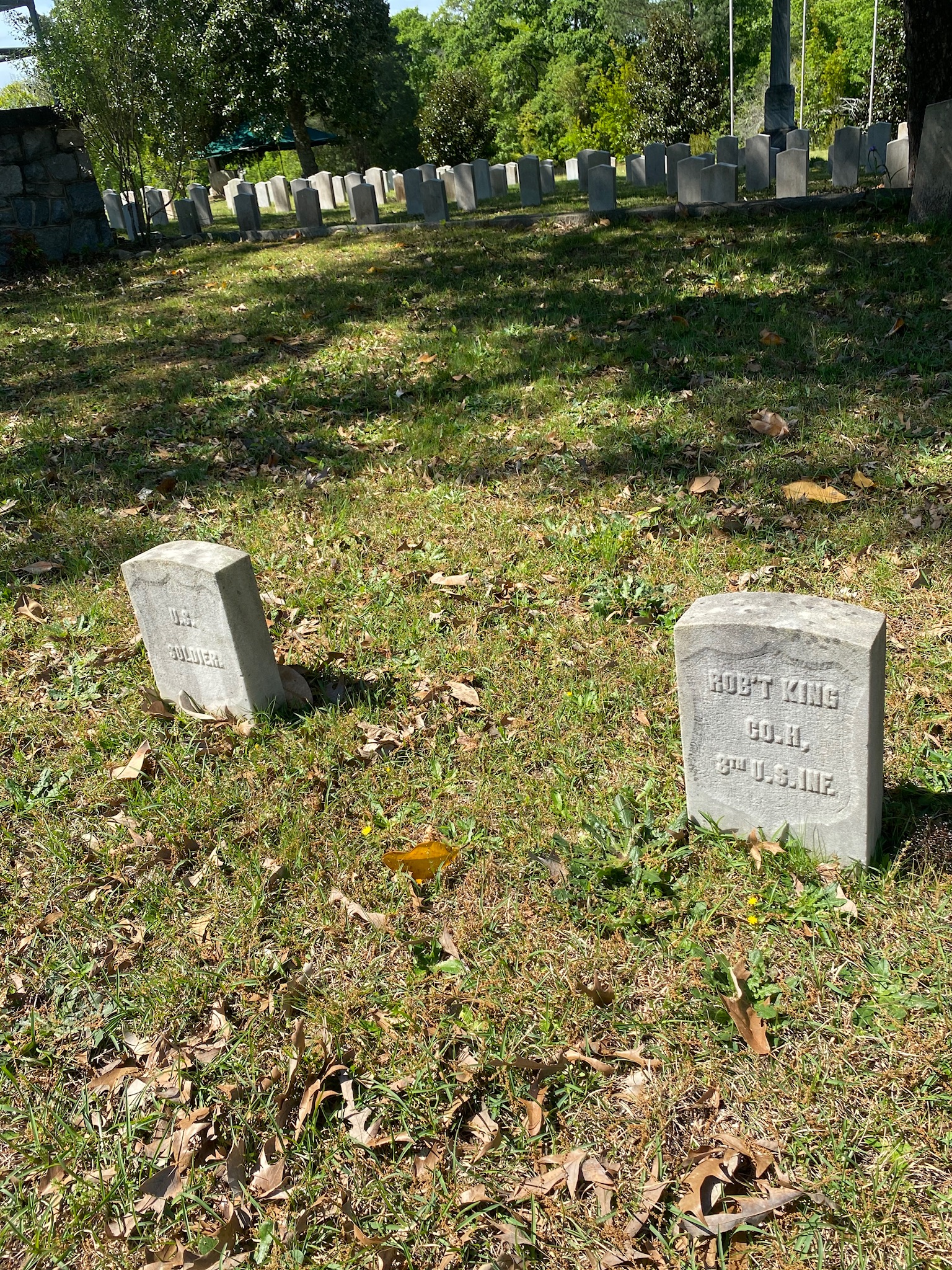 Some of the graves of Union soldiers outside the area set aside for soldiers of the Confederacy.

We also drove through the Randolph Cemetery which is adjacent to Elmwood. Randolph was established in 1871 and was one of the first black cemeteries in Columbia. It was named for Benjamin Franklin Randolph, a black state senator from Orangeburg County who was assassinated in 1868. He was originally buried at another location, but after the cemetery was established, his remains were moved to the cemetery that still bears his name. Eight other black lawmakers from the era of Reconstruction are buried there.

We were unable to locate several areas that we really wanted to see, so we returned yesterday to search for the penitentiary cemetery and a few other sites we were eager to explore. We had read about a mass grave for the remains of several hundred people moved when I-126 was widened and wanted to see it for ourselves. Using Google maps, we had no trouble finding it down an unmarked dirt road off from the northwest corner of Elmwood Cemetery. The state highway department reinterred the remains of almost seven hundred people in 1977. The highway department chose to refer to them as “perhaps early settlers,” but who really knows? It is believed that these remains were just a small percentage of the remains interred in a massive neglected cemetery nearby known as Lower Cemetery. Apparently, sometimes Lower Cemetery has been called Negro Cemetery, Potter’s Cemetery, or Pauper’s Cemetery. These six hundred ninety two just happened to be in the way of traffic. 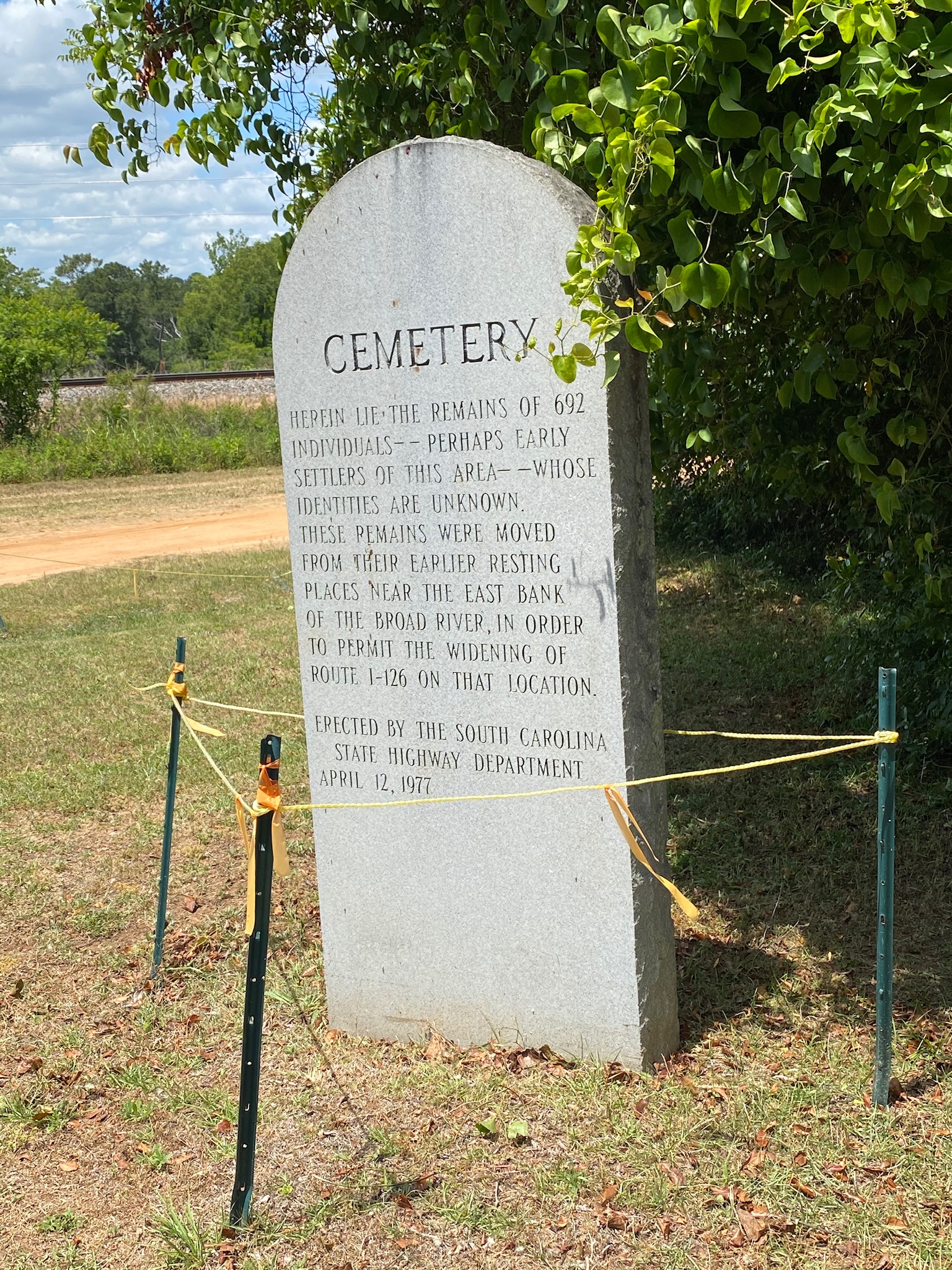 The headstone for the mass grave is just outside a fenced area used for many years to bury the prisoners from the old South Carolina Penitentiary when the cemetery on the grounds of the penitentiary became so full that it was impossible to dig a new grave without disturbing an old one. As South Carolina’s first prison, it welcomed its first convict in 1867. The name was changed to Central Correction Institution (CCI) in 1965. I remember the forbidding old CCI as a scar on the banks of the Congaree River from my college days. It was finally demolished in 1999 when the Lee Correctional Institution became the state’s main prison. Inside the fenced area used by the “state pen,” there is an interesting mix of grave markers. I had hoped to find Alex Weldon’s grave, but most of the markers were in a very poor state of repair. Many of them were not stone; instead there were a lot of metal markers, most of them were rusty, and many of them looked like license plates. It looks like many have been stolen or destroyed. They all had the prisoner’s identification number inscribed as well as their date of death. The cemetery was used for those who died while incarcerated but were unclaimed by their family and also for those who were executed by the state, as was Alex Weldon. As a kid, I remember seeing pictures of “Old Sparky,” the state’s electric chair. When not called by that name, it was often simply referred to as “the chair.” 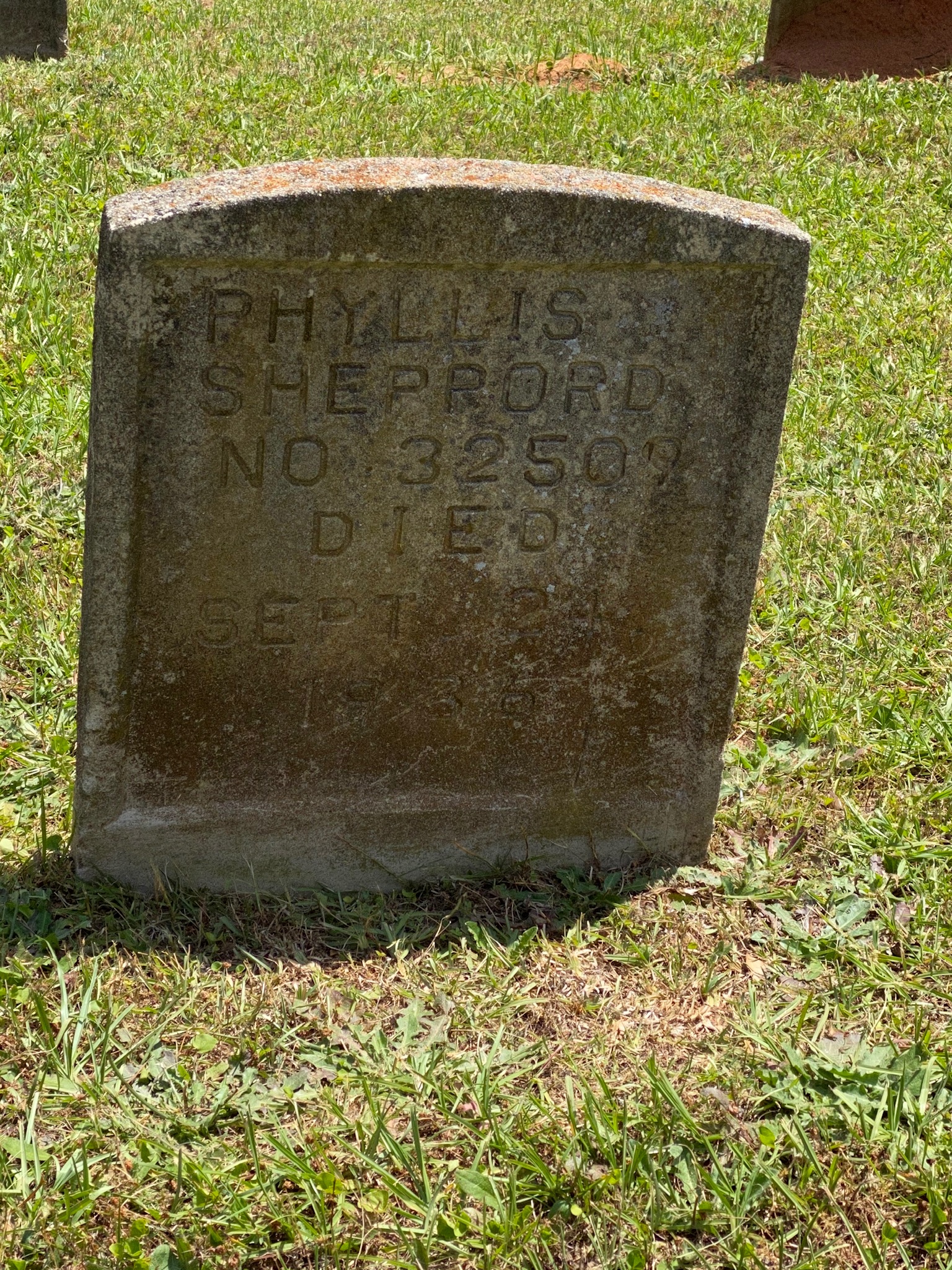 We were surprised to find a grave for a female convict. 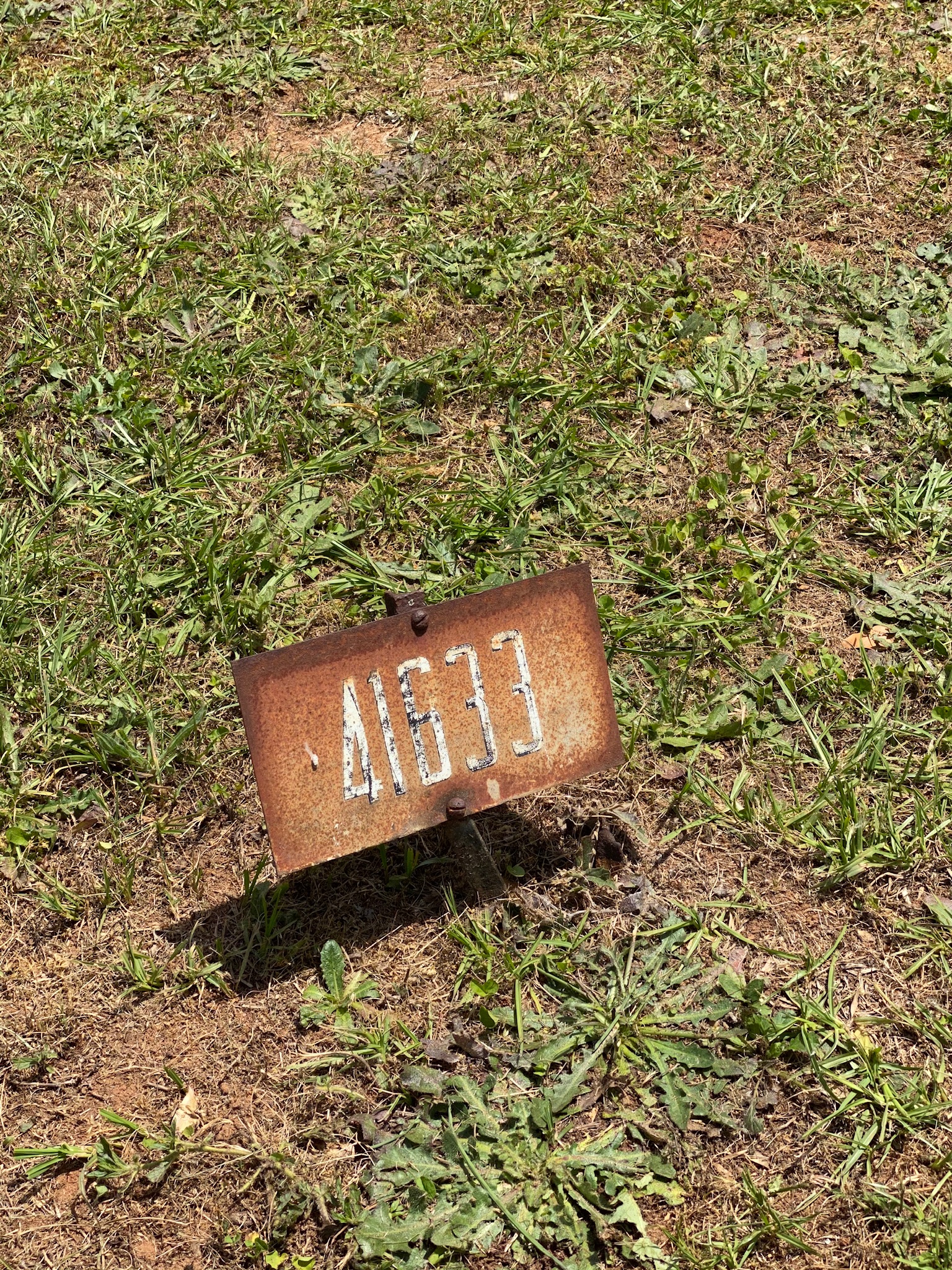 No name- just a number. 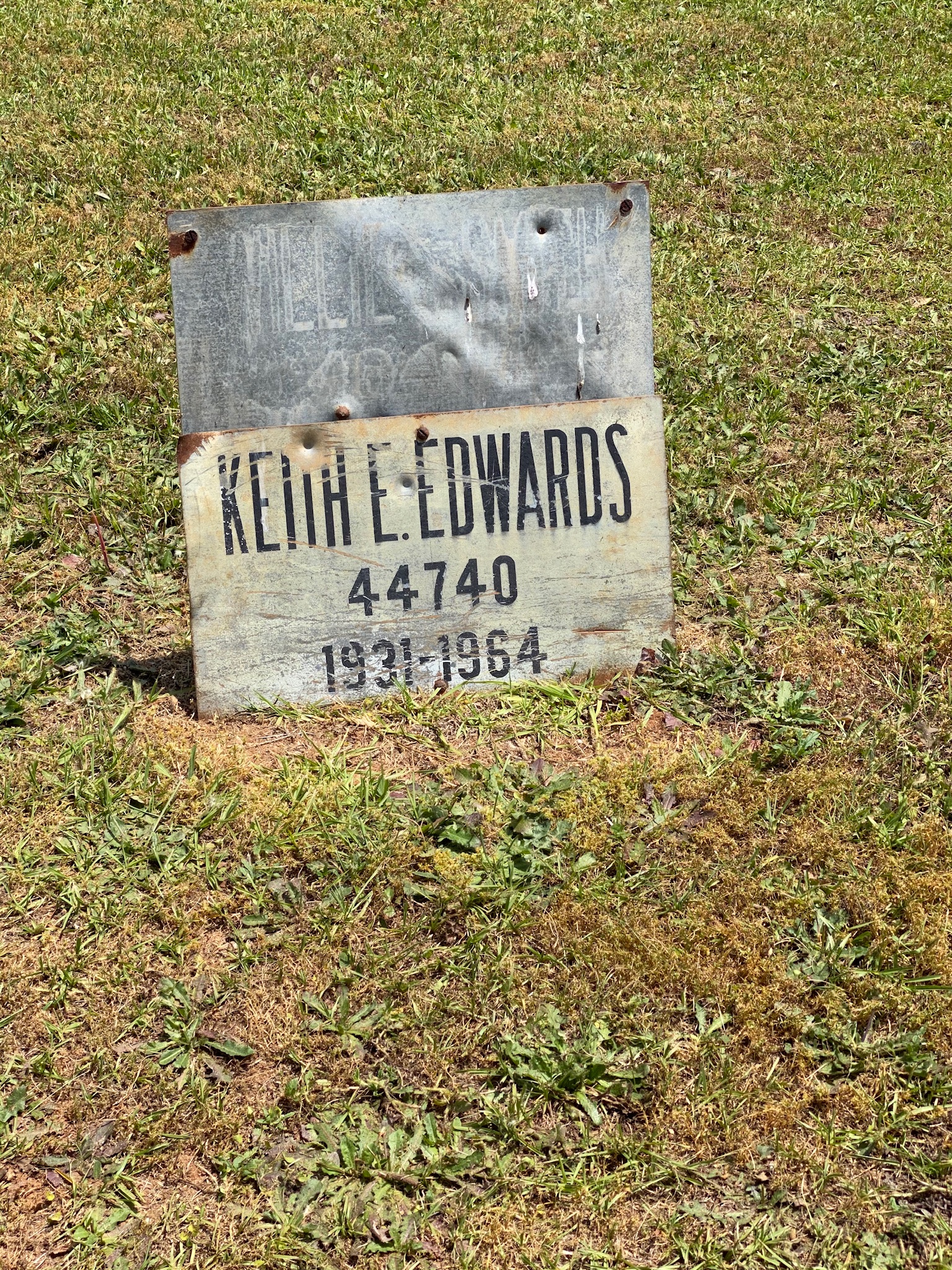 Since this is all that remains of one grave, I think it is safe to assume that this entire field is filled with graves that are unmarked.

Adjacent to the penitentiary cemetery is an small area enclosed with a white fence. This area was the cemetery used for years by the University of South Carolina School of Medicine to inter the cremains of those who had willed their bodies to the school for medical research. Apparently, there was no fence for many years, but there was quite an uproar when it was discovered that cadaver cremains were buried in a corner of the penitentiary cemetery, so the white plastic fence was erected. They put up a nice monument and a bench in case anyone wants to visit the cremains of their loved one, which are co-mingled with everyone else’s cremains from that same year. It seems that they have another resting place now, after having taken alot of heat for using the penitentiary cemetery. I guess they had to find a place deemed more “respectable.” 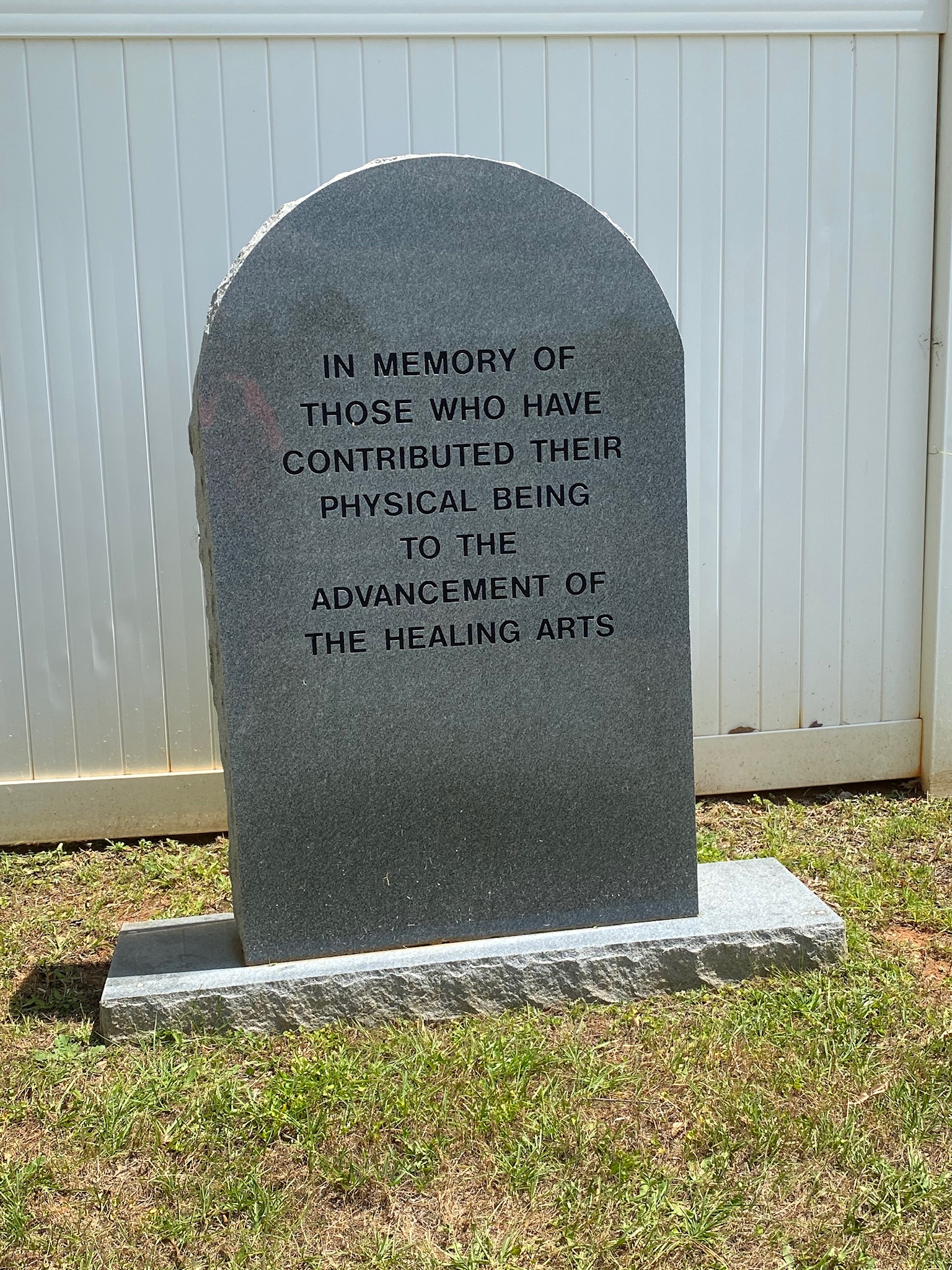 As we walked away from the penitentiary cemetery, we came across this very old ledger pictured below. “Sacred” is the only word that remains legible. Judging from the neglect here, not much in these parts is sacred to anyone. It was a fascinating experience for us, but it was sad nonetheless to see graves so badly neglected. Somehow, it seemed a fitting place to explore during a pandemic.

However, there are several new additions to our lexicon that I would dearly love to bury here and never see or hear again. I am thinking about a mass grave for “stay home, stay safe,” “social distancing,” “uncertain times,” “coronavirus,” “challenging times,” and “we are all in this together.” May these expressions RIP soon! 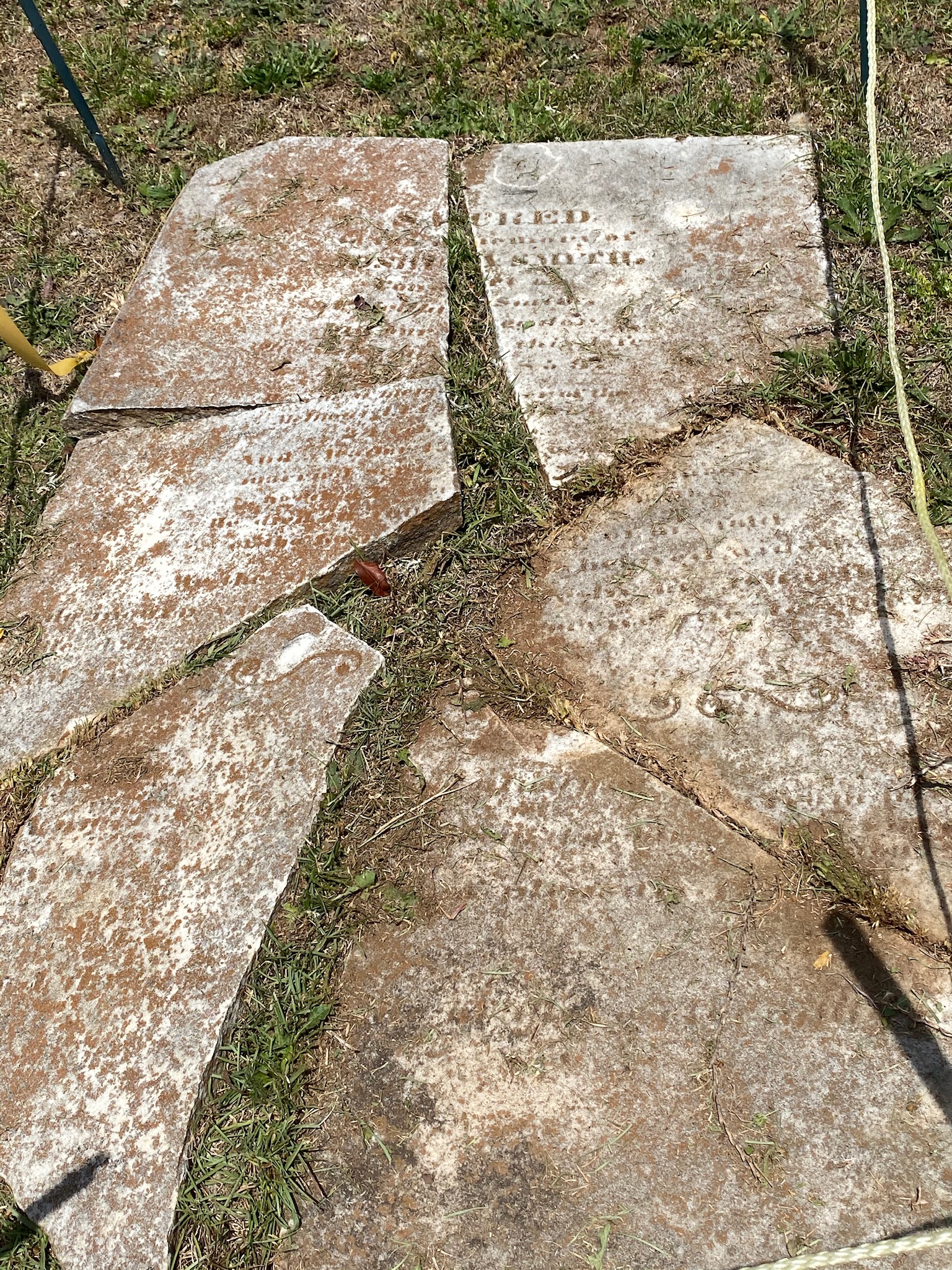 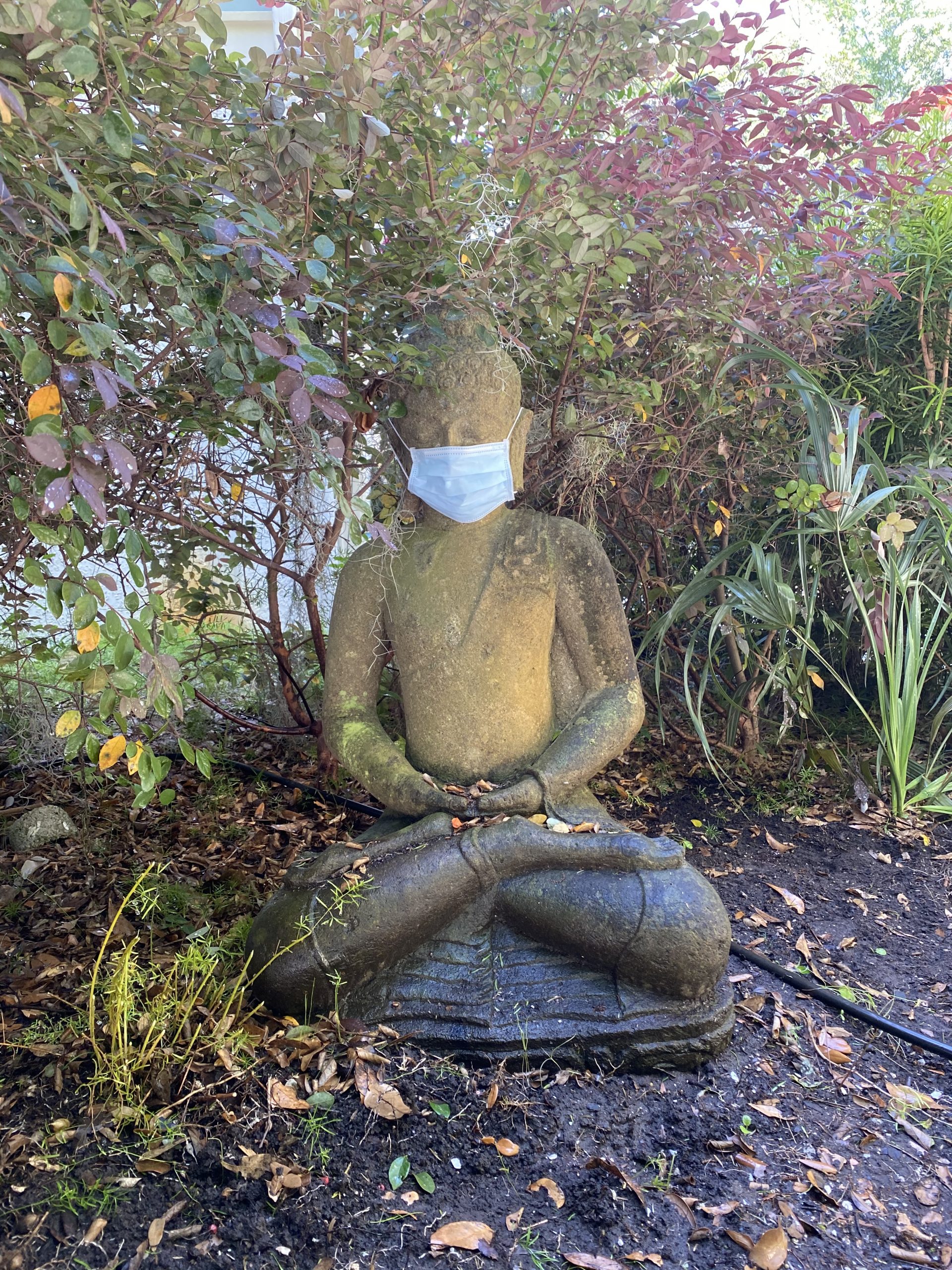