“He was a bold man that first ate an oyster.”  Probably the most famous quote attributed to Jonathan Swift, best known as the author of Gulliver’s Travels.

There were two reasons we made the short drive over to Coosaw Island to look for the South Bluff Shell Rings. One, I am incredibly fascinated with them. Two, we are incredibly restless and ready to get out of the house and out of “lockdown.” We were not required to wear masks and there was no one from which we needed to maintain a “social distance,” so it was nice little adventure. I was excited to find out that there were shell rings so close to home and that they are part of the state trails program so we could easily access the area without trespassing. I mean, seriously, what’s not to love about getting out of your own life for a few hours between breakfast and lunch and taking a peek into the life of people who lived thousands of years ago? The entire trail is only about one third of a mile, but as in most cases, we got lost and walked well over a mile. But persistence paid off. We found markers for two of the three rings in the South Bluff Heritage Preserve. Notice that I did not say that we saw the three rings. In fact, you will need to take your imagination along with you so that you will feel like you’ve been to a shell ring site. To be honest, it did feel a bit like a shell game, but I guess that time, erosion, and farming have been rather rough on the site. There is just not much to see there. There is a slight overgrown ridge at the site of Ring I. We never found Ring II. Never even found the marker. At Ring III, we found the sign and that’s about all we saw; but we did see lots of oyster shells on the ground. Just past Ring I, there is a bench on a bluff overlooking the marshes of Boatswain Pond Creek. The view is beautiful. Those Native Americans sure knew how to pick a pretty spot for their village. More than likely, they did not choose site for its beauty but more for its access to the water. 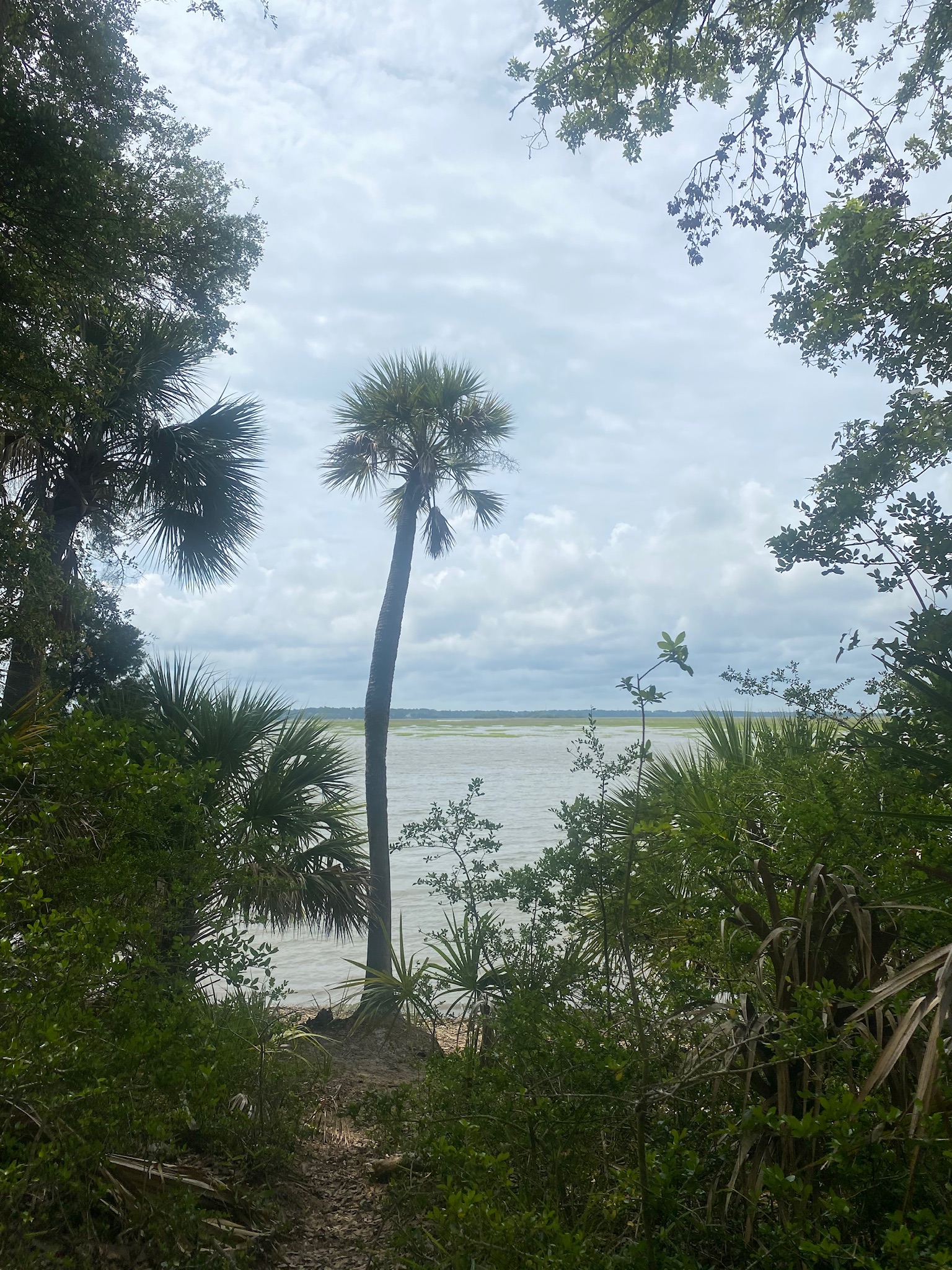 The state of South Carolina has more rings than any other state. There are seventeen known shell ring sites and twenty five individual shell rings scattered along the coast. Sometimes, the shell rings are called middens. Although they share many characteristics, they are by no means identical. For example, the shell mounds found at the Sewee site near Awendaw have a very unique feature. One ring is made only of oyster shells; the other midden is composed of clam shells. However, construction of shell rings in the state followed a similar pattern. The rings were usually 130 to 170 feet in diameter and they reach a height of three to four feet. Here at Coosaw, rings I and II are attached. They extended for over three hundred feet and were nearly six feet high. The only other site with conjoined rings is near Hilton Head Island.

The Coosaw Shell Rings were a fairly recent discovery, having only been mapped and studied by archeologists in the early years of this century. But the rings themselves are quite old. Chester DePratter of the state Institute of Archaeology and Anthropology (SCIAA) determined that the shell rings are from the Archaic Period which was 3000-1000 B.C. A fourth ring was also identified making this site one of the most complex Archaic shell rings sites in the country, but there was no sign or mention of it at the site. Radiocarbon dating places the age of these rings at about 3800 B. C. From the age of the shells on top of the ring, it appears that the site was abandoned about two hundred years after construction began. 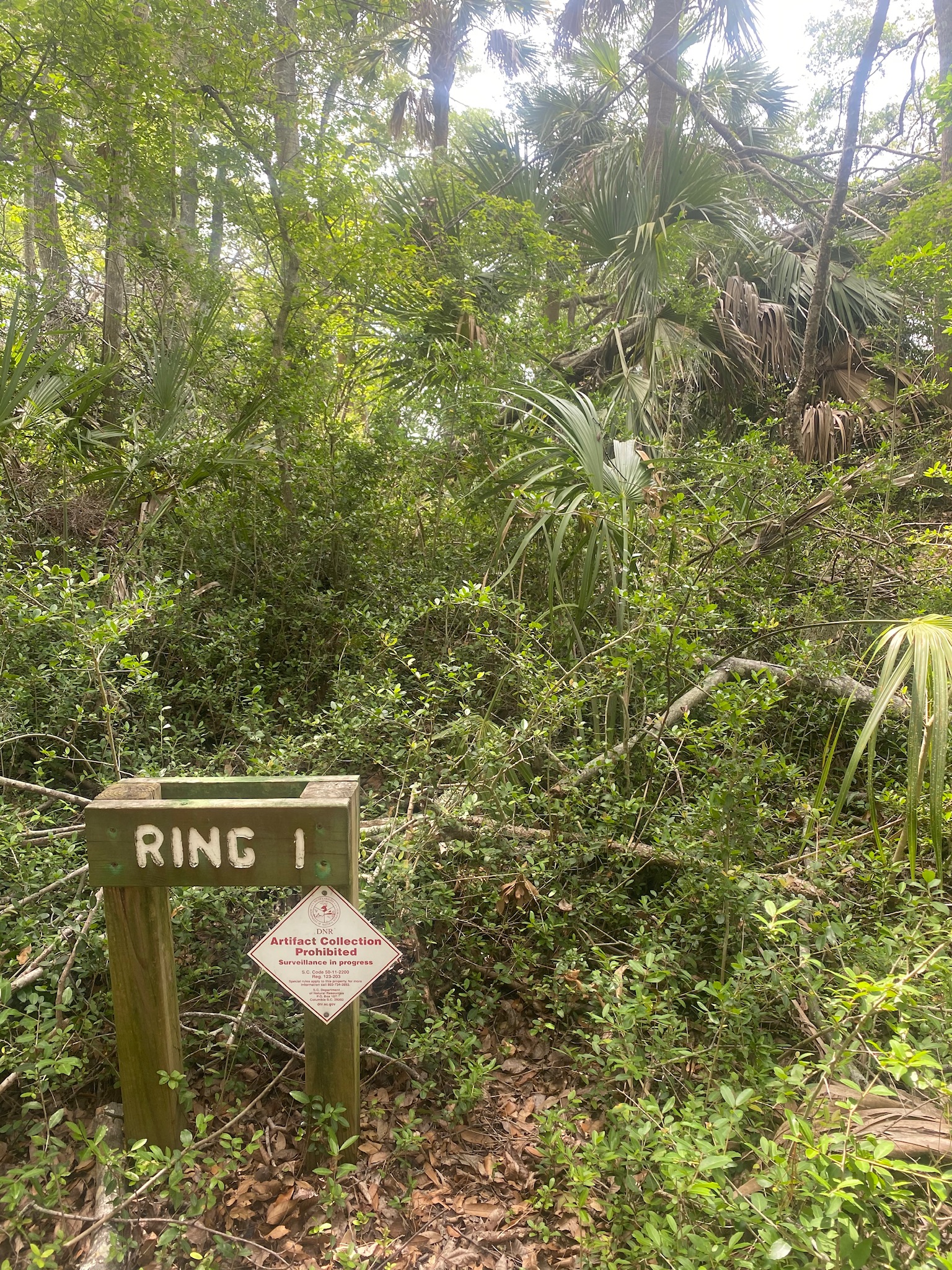 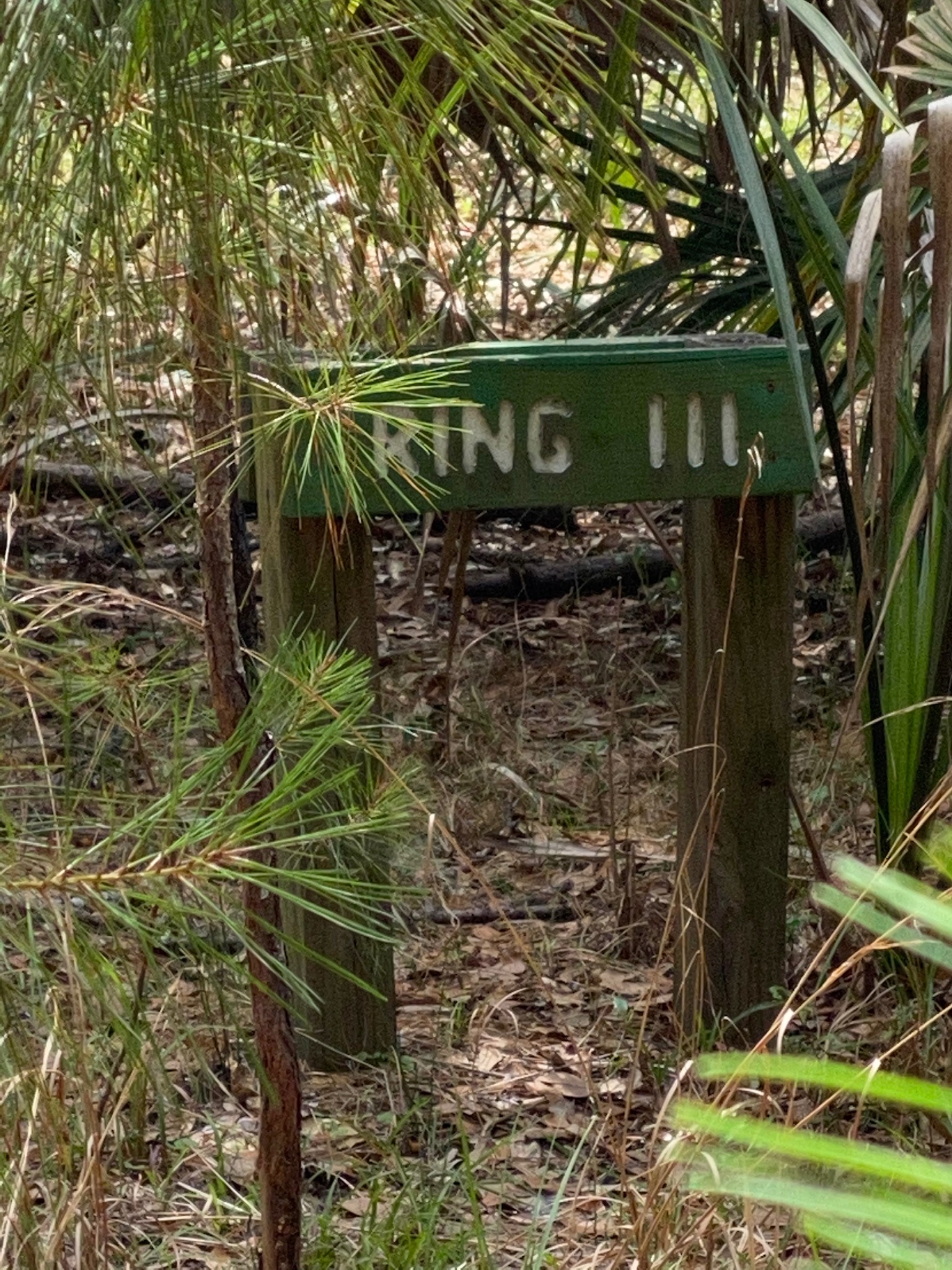 But I am confused about the purpose of these rings and it seems that I am not the only one. One theory is that they were simply dumps used to discard scraps from meals. Archeologists have found pottery shards and other artifacts that help them piece together the puzzle of these Native Americans’ lives. It turns out that they actually invented pottery. The oldest pottery in the country comes from Georgia and South Carolina and was made by the same people who made these shell rings. Some people believe that the rings were a gathering spot or central plaza for the village. Others think they were used for religious ceremonies. The size of the various rings tell researchers how many people inhabited the site. The shell rings on Hilton Head Island are relatively small and are thought to have been home to only a dozen or two dozen people. On the other hand, there are shell rings in Florida that extend as much as five hundred feet, reach heights of fifteen feet, and are thought to be home to about one hundred people. Most experts agree that they were abandoned due to rising tides.

The rings at Sewee are the last in a long chain that dot the coast of the Southeast from Florida up through Georgia and on to Awendaw above Charleston in South Carolina. There are about fifty known shell rings in North America. There are also some in Colombia, Peru, and Japan. We probably won’t get to those, but we will definitely stop at the Sewee site in the near future and maybe venture over to the site on Hilton Head Island. This history on the half shell is pretty interesting stuff.