“The view of the Earth is absolutely spectacular, and the feeling of looking back and seeing your planet as a planet is just an amazing feeling. It’s a totally different perspective , and it makes you appreciate, actually, how fragile our existence is.”    — Sally Ride — became the first American woman in space in 1983 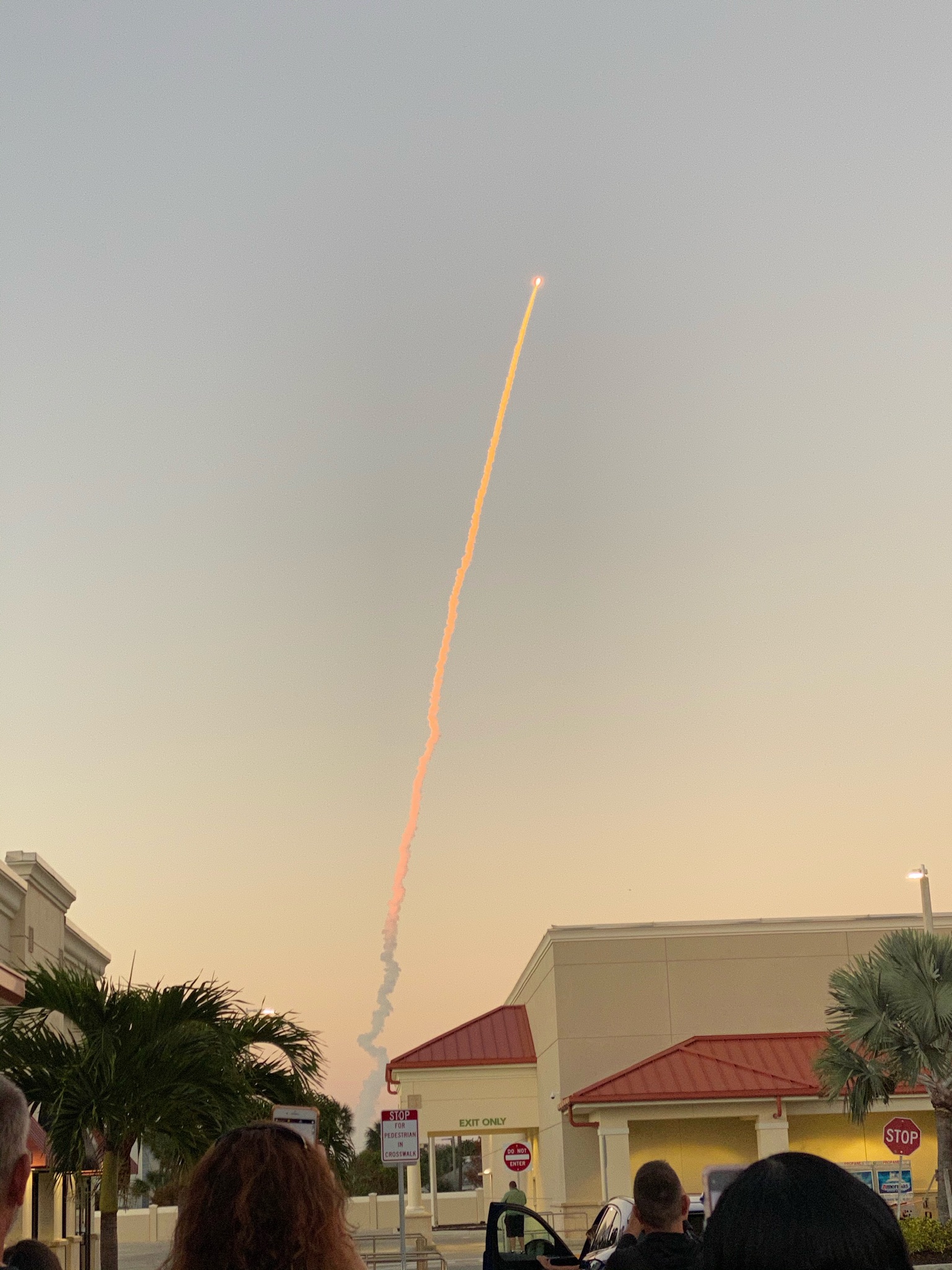 Seeing the launch of a spacecraft has long been on our “to do” list. One night about a dozen years ago, we stepped out the back door late at night and, at the appointed time, looked up at the southern sky across the creek and marsh and watched a magnificent launch from the Kennedy Space Center. Since that night, we have yearned to see a launch from a closer vantage point and it was our plan to see the November 14 SpaceX Crew Dragon blast off on a mission to the International Space Station (ISS) from the Kennedy Space Center. This is the first crew rotation mission launch as part of the Commercial Crew Program. One mission of this mission is to mark the beginning of “regular safe and reliable flights from the USA to the ISS.” The crew is made up of three NASA astronauts, two men (one black, one white) and one woman, as well as an astronaut from the Japan Aerospace Exploration Agency (JAXA). They will be heading to the space station for a six month tour, joining a NASA astronaut and two Russian cosmonauts already at the ISS. It’s like the UN, only hurling through space at a pretty rapid clip with a much smarter delegation. The ISS orbits the Earth every ninety minutes. The Dragon will get the needed lift into orbit by the Falcon 9. This rocket is different from others used before SpaceX arrived on the scene. It can land and be reused, which really reduces the cost of space travel. It’s the first rocket ever to have that capability. In fact, they have launched the Falcon 9 ninety-six times, landed it fifty-seven times, and reflown it forty-times. That’s pretty impressive.

But this is 2020, so things go sideways, as we have all deduced by this point in time. (Well, maybe not those of you living under a rock since February or March.) The eagerly anticipated blast-off planned for this evening was scrubbed. But, you know, we had a blast anyway. Here is what happened: We left home to head south towards Florida, but even before we were off the island, I heard the familiar chime informing me that there was an incoming text. My dear friend, Karen wanted contact information on a mutual friend. Our business concluded, she casually texted that they were traveling to Florida to see the SpaceX launch. After a long period of disbelief and screaming as best you can when texting (ALL CAPS!), we settled down and made dinner plans at a restaurant in Cocoa Beach. We arrived at the restaurant early in need of restorative cocktails after the long drive and crushing news about the scrubbed mission. The waitstaff cheerfully informed us that we had a perfect vantage point for the launch of a previously scheduled but scrubbed unmanned blast-off right there from our table on the sidewalk. It was scheduled for 5:31 Friday evening. Wow! No schelping sandwiches and sneaking wine into the space center parking lot and up onto crowded bleachers! As it turned out, quite serendipitously, we had perfect weather, excellent seats, good friends at our side, and adult beverages well within reach.  We were probably as close as we would have been at the Kennedy Space Center parking lot, but the roar of the crowd here was other bar patrons ordering refills, not the roar of space travel aficionados. OK, that’s not quite true. In reality, all of the restaurant’s diners spilled out into the parking lot to cheer the lift-off. Admittedly, we were in what was basically a Publix parking lot and it was not the setting we had anticipated, but sometimes you have to let your mind fill in the blanks, which is what our mothers told us all day long, remember? How many times did your mom say, “Use your imagination!” And, with that in mind, I think that sometimes good enough is, well, good enough.

Both of us well remember where we were and what we were doing on that hot summer night back in 1969 when the Apollo 11 astronauts walked on the moon for the first time. We recall watching the grainy images on small black-and-white televisions. Anyone who witnessed that moonwalk can never forget those words spoken by Neil Armstrong: “That’s one small step for a man; one giant leap for mankind.” It’s the stuff that surely thrills almost anyone with a pulse and sends the imagination on all sorts of lofty flights. SpaceX is the fruit of Elon Musk’s imagination and that man dreams big. Just take a look at his website. He fully intends to make life multiplanetary: “SpaceX also offers commercial flights for private passengers to both Earth and Lunar orbit. To start planning your journey, please contact us at sales@spacex.com.” Only time will tell if the two of us will still be riding this big rock around the sun when space travel for average folks like us becomes common. I can’t speak for Rick, but I would jump at the chance to take a little ride. Just imagine the Christmas card selfie we could snap from space! For now, though, we are happy to have had a chance to see a launch from a Publix parking lot in Cocoa Beach, especially with dear friends and cold beverages.

After seeing this blast-off, I am convinced now more than ever that our baby boomer generation is quite possibly the luckiest generation.  We had a fairly untethered childhood, roaming rather freely anywhere we could explore on foot or on a bicycle between meals with all types of “partners in crime” from the neighborhood. We learned (or didn’t) to control ourselves in a childhood where consequences for bad choices were swift and unambiguous even as we were mostly left to our own devices to make mistakes and figure stuff out. Most of us learned where the guardrails needed to be. And now, we get to glimpse the infinite possibilities just over the horizon, in large measure because we were taught, encouraged, and allowed to explore our world using our own imagination as the guidebook. I don’t know, but maybe every generation thinks their generation has the best ride and, I guess that, in the end, that’s really all that matters anyway. 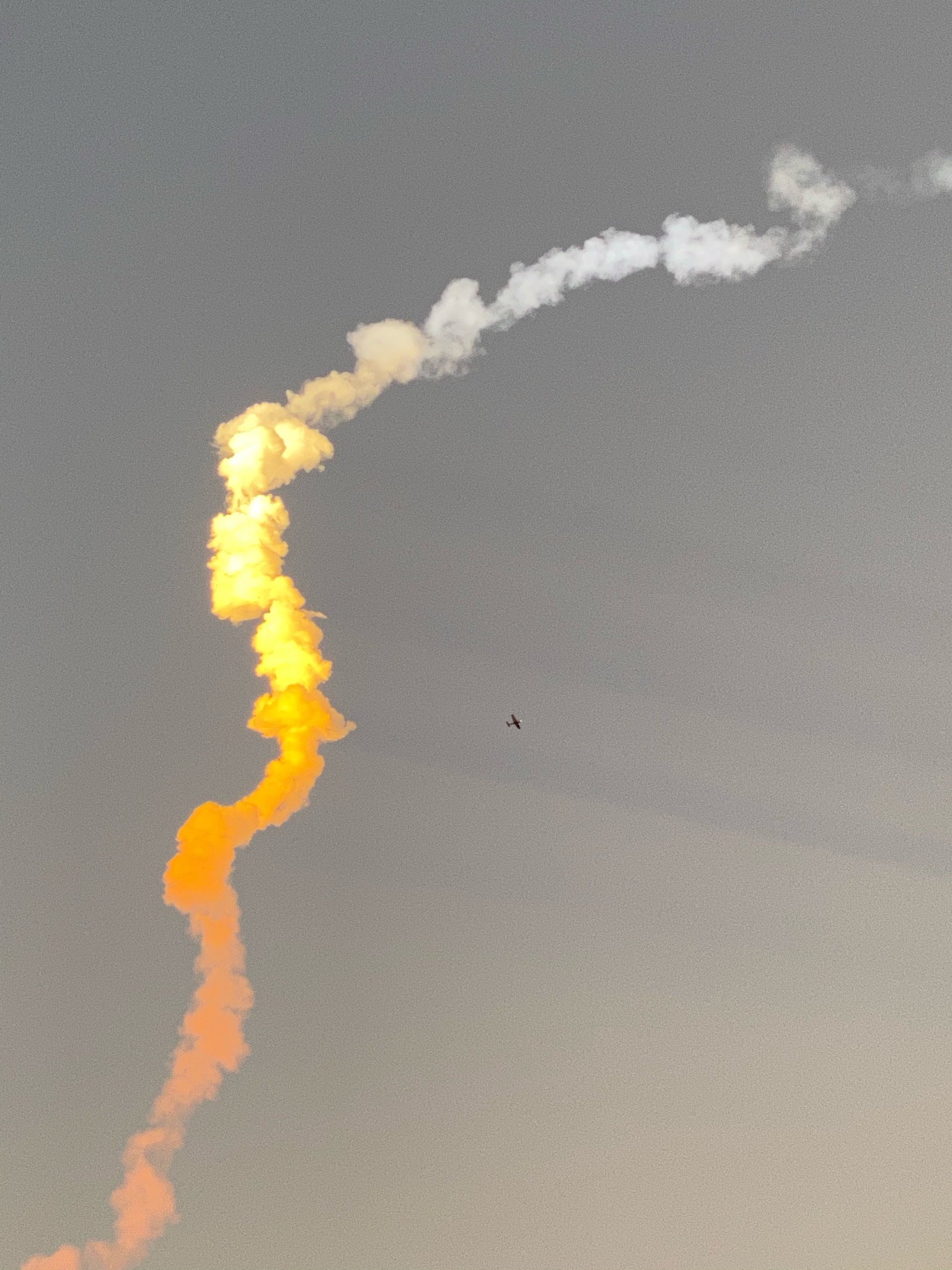 Check out the airplane nearby. The pilot had been circling around waiting for the launch. 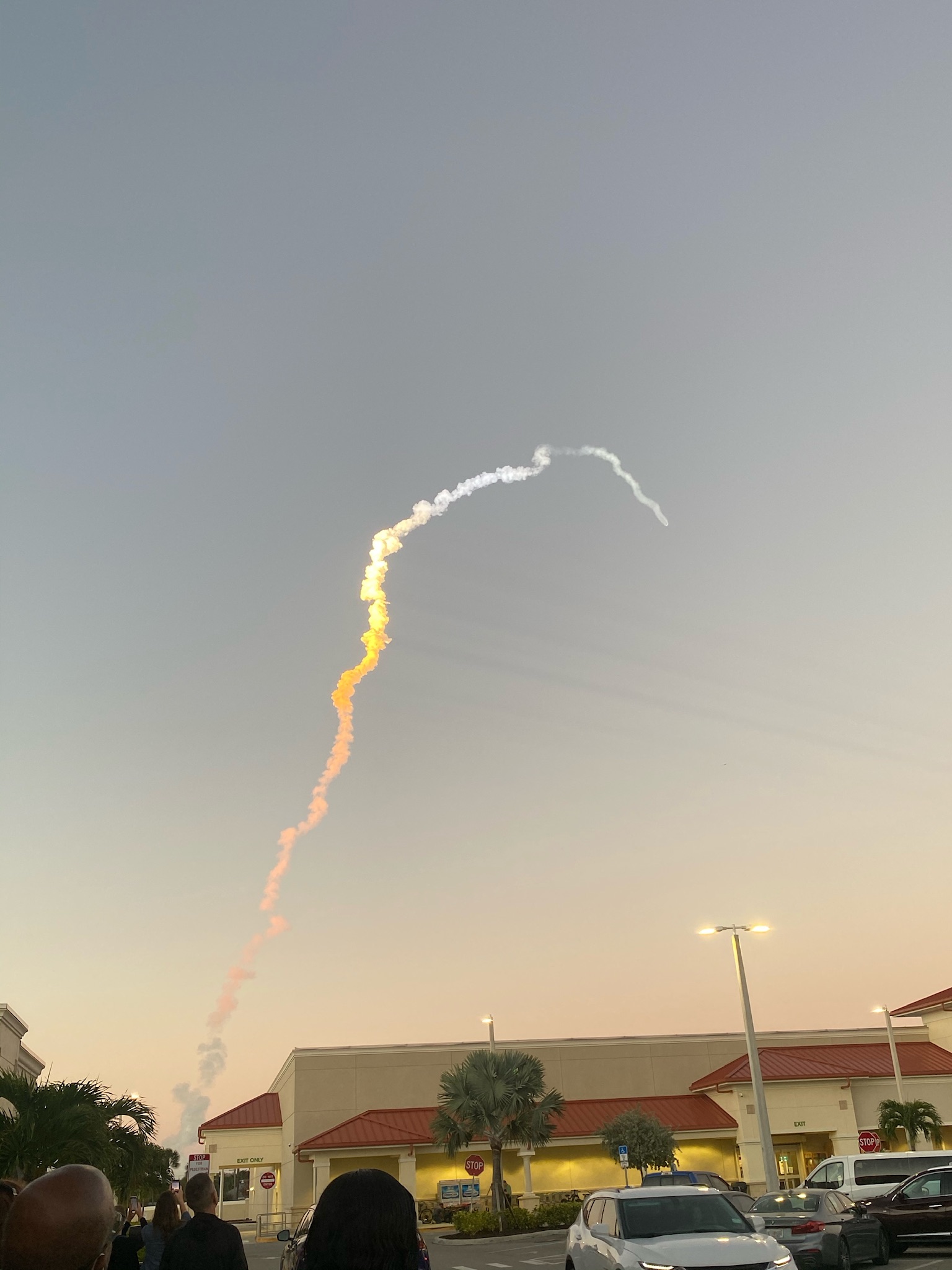 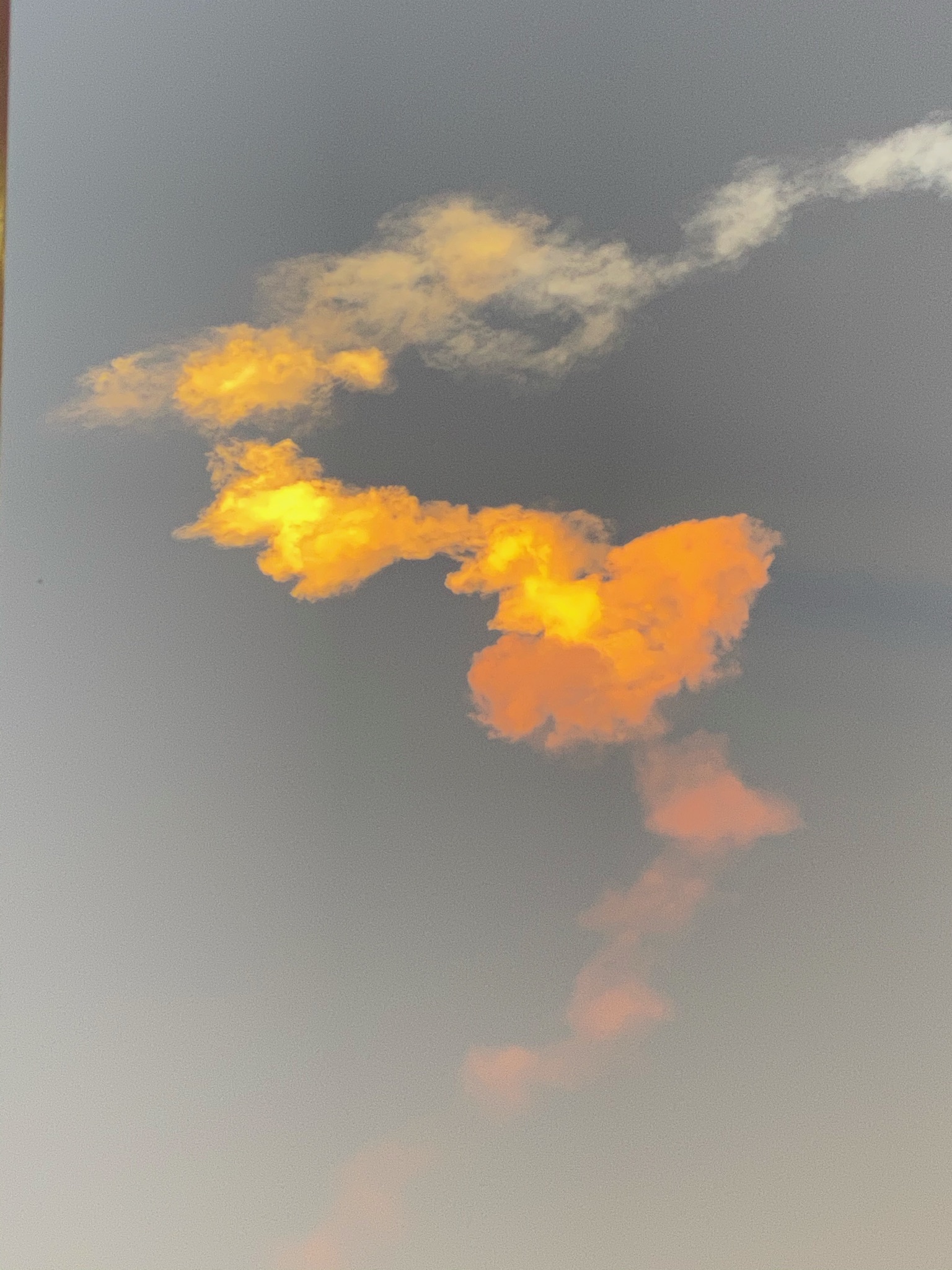 The Space Coast locals declared this launch to be one of the most beautiful they have ever seen.