You really have to give “Crawfish” Eddie Walker credit for coming up with a genius way to skirt pesky laws. In 1933, near the end of Prohibition, he built his shack on stilts above the water on the sand banks at the edge of Biscayne Bay in Miami-Dade County, Florida. Eddie was ostensibly a purveyor of bait and beer to outgoing fishermen, but it seems that lots of booze was imbibed on the premises with no liquor license tacked up on the wall. Gambling was another favorite pastime at Eddie’s joint. Conveniently located about a mile offshore on a sort of watery frontier, Eddie’s establishment was just out of reach of the long arm of the law. Eddie also made a mean bowl of crawfish chowder, which he called chilau, using the crawfish he caught underneath the shack. It was a popular stop for all kinds of boat traffic. Before long, other shacks and clubs began to rise from the shallow water.

Stiltsville quickly earned a bit of rogue cult status. What happened in Stiltsville stayed in Stiltsville. It seemed like it was right on the edge of civilization. Miami was in sight, so you knew civilization was out there, but its effects seemed somehow diminished. You could think time spent out at Stiltsville as a hard-partying pillaging and plundering pirate kind life, if only for a little while. It was a wonderful escape for the wealthy and respectable folks from Miami as well as the winter resort guests wishing to get away from the stuffy ballrooms and soirees of the social season. The 360 degree views and feeling of total freedom was a magnet to people from all walks of life; bankers and lawyers loved the vibe as much as blue-collar workers. Roy Collins, a governor of Florida during the 1950s, was a frequent visitor at the establishment owned by a fellow by the name of Jimmy Ellenburg, who was the unofficial mayor of Stiltsville. There was a member’s-only gentlemen’s club with hefty dues that were eagerly paid to allow access to all the fun waiting inside. Also, there was a 1960s era Bikini Club where women dressed in (you guessed it) bikinis were rewarded with free drinks. Sunbathing au naturel was sanctioned and patrons could even “get a room” if needed. Stiltsville even attracted Hollywood luminaries. Area newspapers loved to show the likes of Betty Grable and Joan Crawford lounging around out there, giving the area a big dose of glam.

But not all of the activities at Stiltsville were seedy and it would probably be fair to say that the over time, the area was used less for nefarious purposes and more for just “getting away from it all.” Over the years, thousands of people visited the area including Boy Scout troops and Optimist Clubs. Many Miami families remember spending time together out at the flats just fishing and enjoying being outdoors. The area has had a cameo role in all kinds of movies, television programs, books, and even video games. It’s been the subject of many magazine articles, including a 1941 Life article which described Stiltsville’s Quarterdeck Club as being “a $100,000 play-palace equipped with bar, lounge, bridge deck, dining room and dock slips for yachts.” The same article described Stiltsville as an “extraordinary American community dedicated solely to sunlight, salt water and the well-being of the human spirit.” Wow. That’s putting quite a spin on it!

At its heyday, Stiltsville was comprised of around twenty seven structures. They even experimented with architecture and the shacks reflected the aesthetic tendencies of the builder, so the structures were built in all shapes and sizes. As the years passed, the style of the structures evolved from ramshackle shacks to more refined lodge-type buildings. There were huge barges leftover from WWII and sold as salvage to locals who were happy to anchor them in Stiltsville, making them the ultimate party barges. One structure in the liquid neighborhood was topped with a Mansard roof and there was at least one A-frame. Many of the owners tended to favor bright Caribbean colors, and one of the houses was actually featured in a Pittsburgh Paints advertising campaign. From a distance, the structures seem to levitate above the sea. Some people say they seem like an apparition or Flying Dutchman on the edge of the bay. 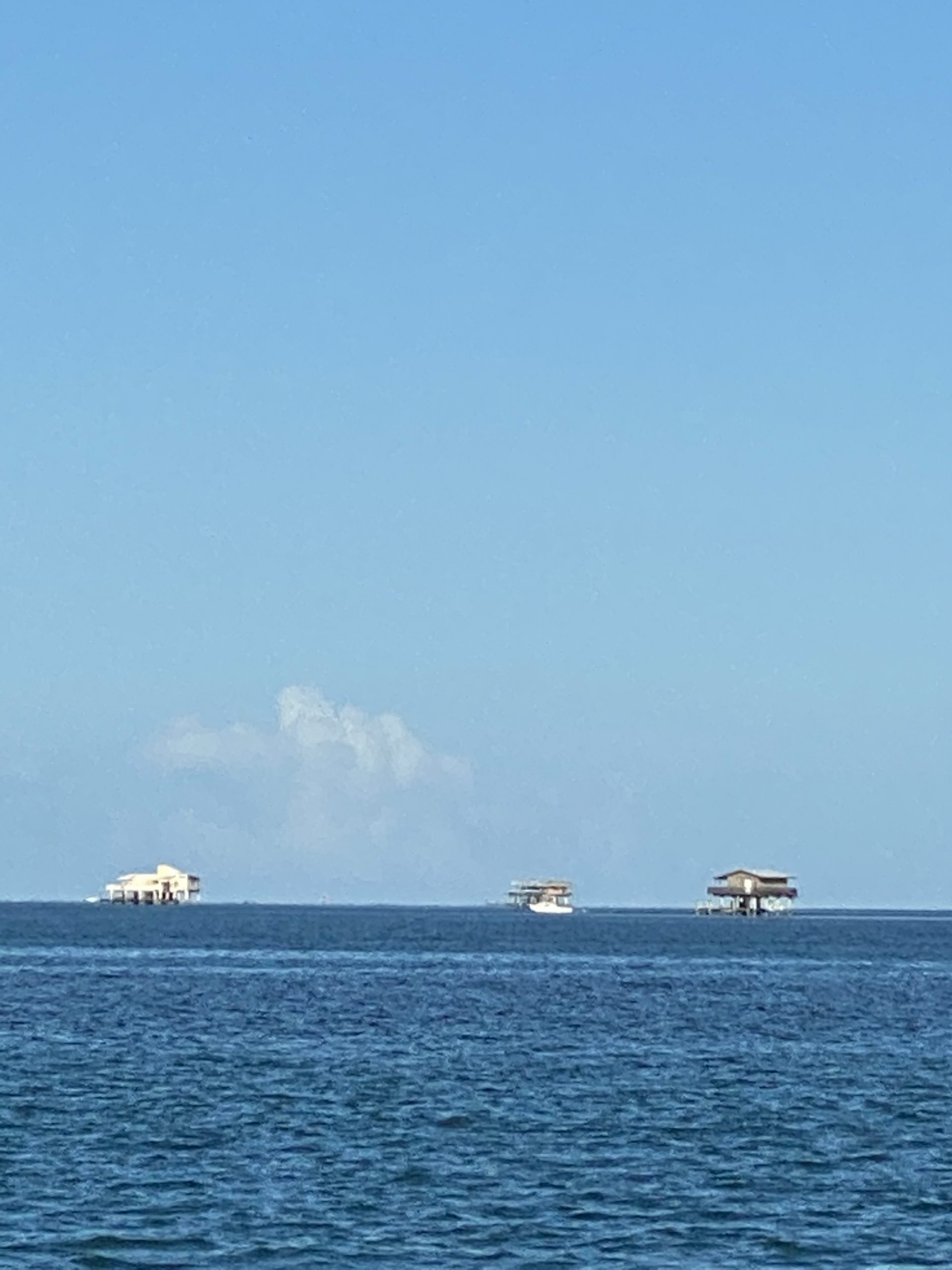 Three of the remaining Stiltsville shacks. From a distance, they appear to hover over the water.

Time, weather, and regulations were not kind to Stiltsville. Incessant exposure to the elements took its toll on the community. The owners were constantly repairing and rebuilding and at some point, hurricanes won the day. As of now, nature has been unable to erase all of the remnants, so government regulation has stepped in to lend a helping hand. After Hurricane Betsy blew through in 1965, the state of Florida passed a law that made it impossible to rebuild after a hurricane inflicted damage to more than fifty percent of a structure. The same law also put an end to permits for new construction. Fires were also a hazard, with Stiltsville being quite far from the nearest fire station, while hovering right over an unlimited source of water. The Quarterdeck Club was destroyed by fire in 1961 and the cause of the fire was rumored to be jealousy. Seems the owner’s wife took issue with something her husband was doing. Or not doing.

When the National Park Service (NPS) established Biscayne National Park, the state of Florida deeded the Stiltsville area to the the park service. The NPS has agreed not to take out what is left of Stiltsville and a trust was established with lofty goals and plans for the seven remaining structures. To date, the promises seem as evanescent as the community the trust hopes to save. Oddly enough, since ninety-five percent of Biscayne National Park is water or what lies below the water, park officials see a silver lining to saving Stiltsville. Officials believe that many visitors come to Biscayne because they hear of Stiltsville and want to see it. These visitors can take a boat tour and, while out on the water, learn about the history of the area as well as about the marine environment that the park works to protect. We are living breathing examples of the genius of this plan. We took the tour to see Stiltsville, but learned about the four distinct ecosystems of the Biscayne Bay, as well as other cool facts about the area. And nature put on a show, as it tends to do when you get outside and give it a chance. We saw at least four manatee lazing away a Sunday afternoon as well as well as a huge manta ray flying through the air in an frantic effort to escape a predator. Of course, there were all sorts of birds looking for a meal. We had a fine afternoon out on the water at a national park that we would have missed if we had not heard of Stiltsville and its checkered past. There were eighteen passengers on the boat yesterday, so it’s clear that Stiltsville can still draw a crowd eager to get away from solid ground for a while. 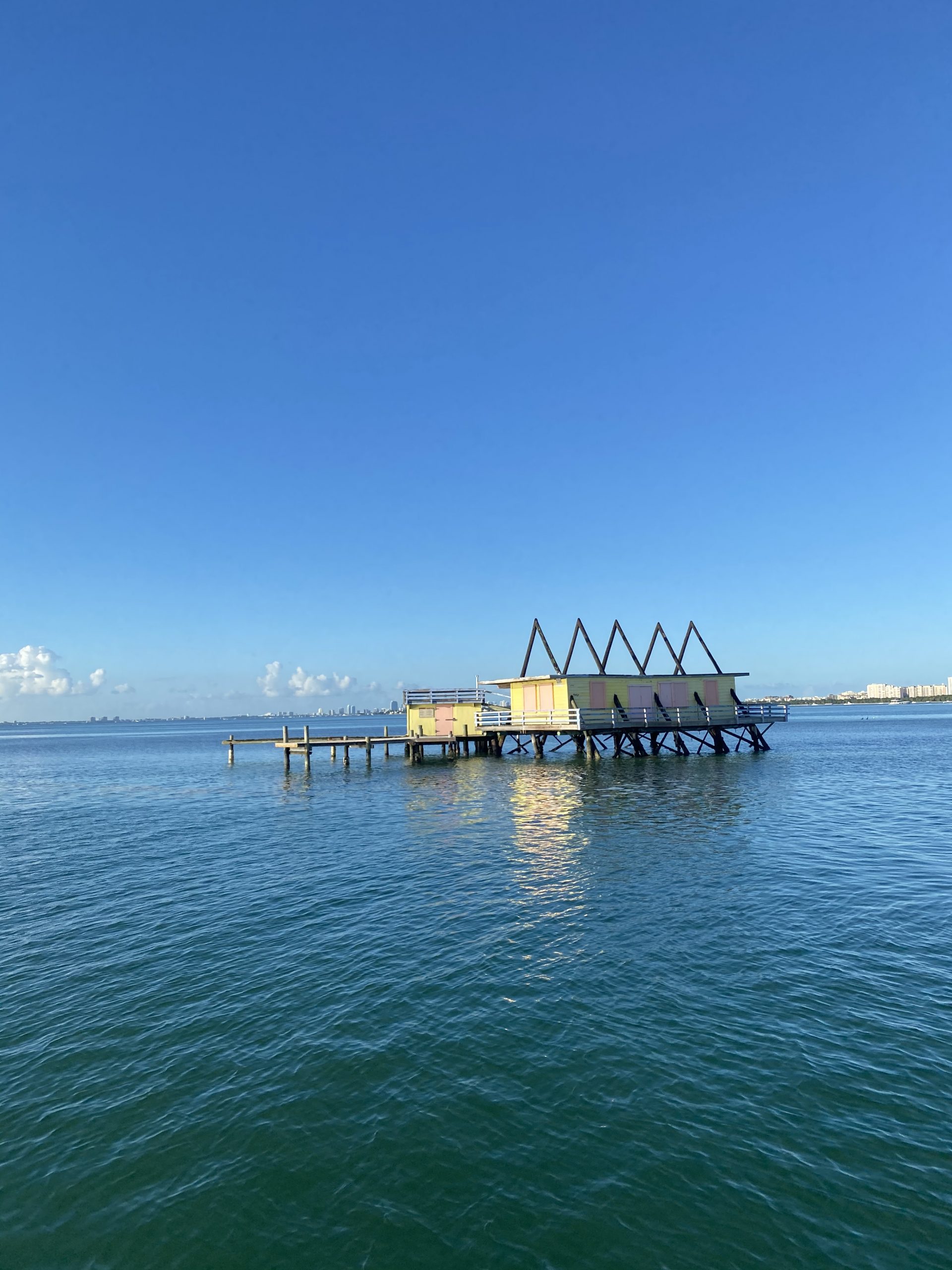 The A-frame sans the roof. See downtown Miami in the background. 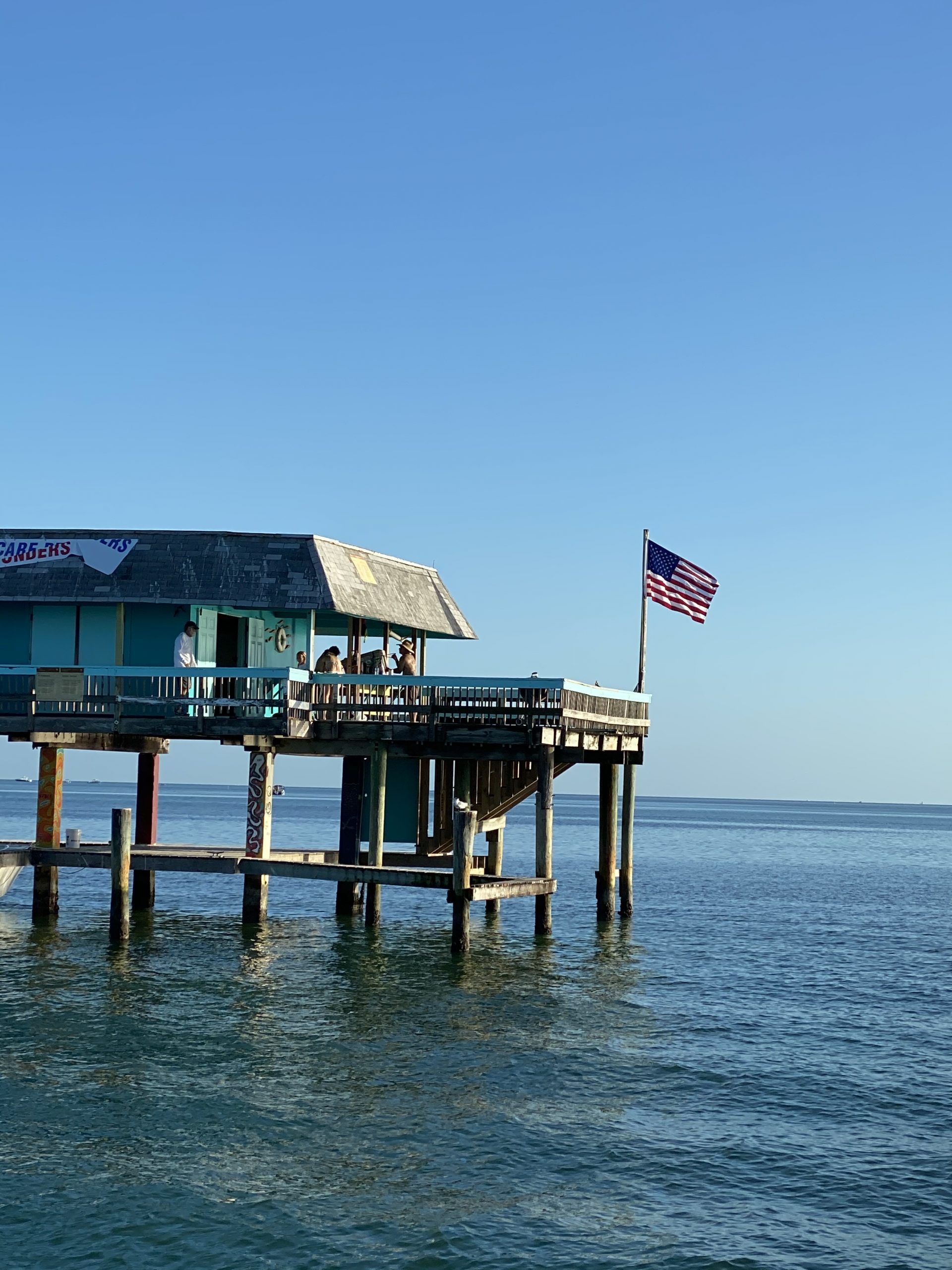 When a US flag is flying, the owner is occupying the building. Anyone caught trespassing is subject to a $5,000 fine. 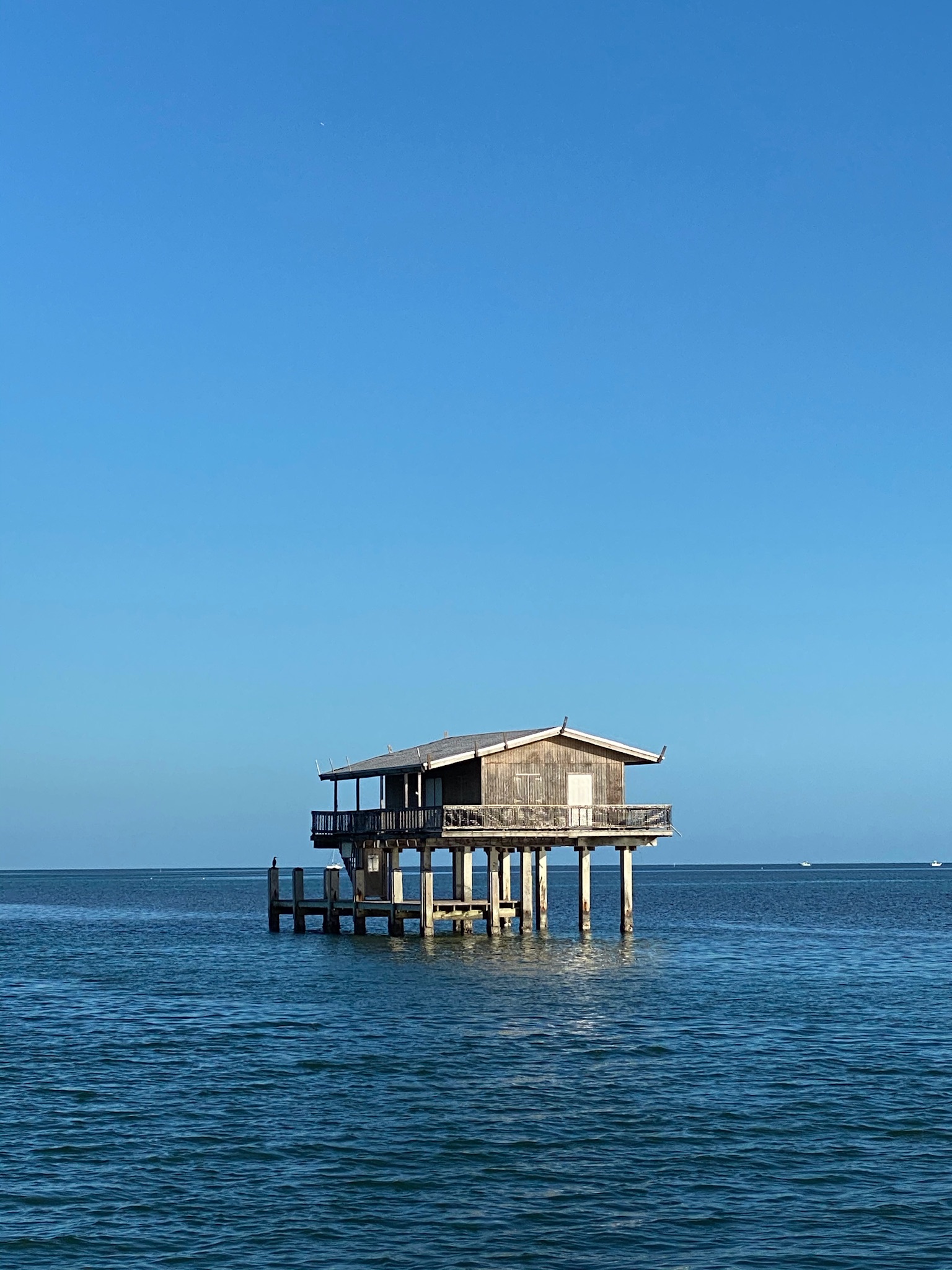 This is called the Hicks House. The owners must do whatever they can to protect the piling because if they fail, the structure cannot be saved. 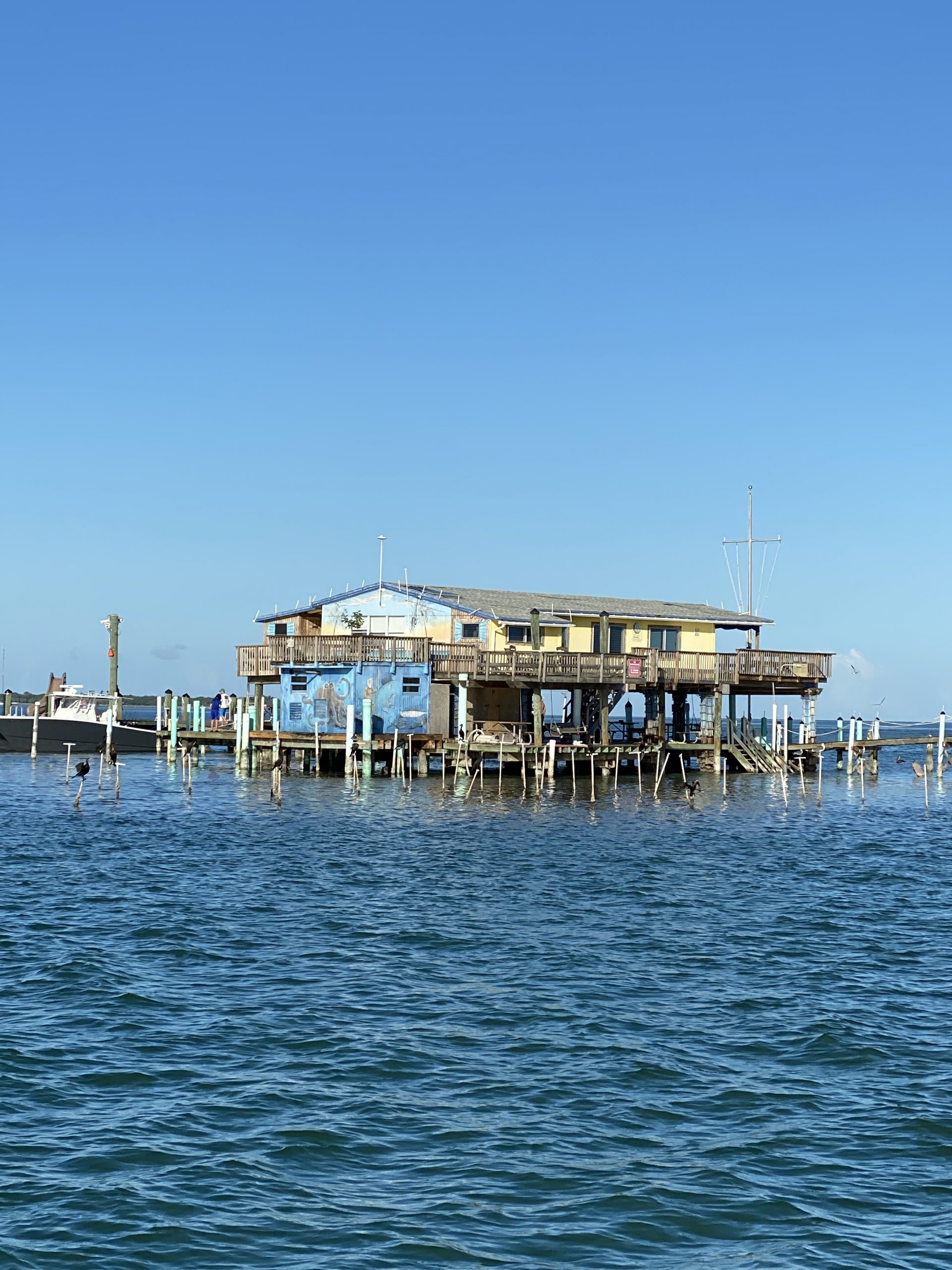 This house looks like a ramshackle mess, but is actually tricked out with all sorts of conveniences and gadgetry.