“A cat has absolute emotional honesty: human beings, for one reason or another, may hide their feelings, but a cat does not.”   —-Ernest Hemingway

I must admit that I am not particularly a fan of the writing of Ernest Hemingway. I’ve probably slogged through three of his books, but honestly, I find his life ever so much more fascinating than his writing. I did read a historical fiction account of his time in Key West and loved it. I guess it’s just his writing style that I don’t particularly care for, but I know everyone else on the planet fawns all over his writing.

So, I guess knowing how universally Hemingway and his literary works are adored, tour guides in Havana love to show everyone the haunts of Ernest, his friends, and his family. When we were in Havana a few years ago, we stopped for lunch at a restaurant where we were told that he loved the mojitos, La Bodeguita del Medio. We also whiled away a few hours at El Floridita, where there is actually a bronze statue of him sitting at the bar. Supposedly, one of Papa’s famous sayings, which both of those bars love, was that he drank “My mojito in La Bodeguita, My daiquiri in El Floridita.” Imagine my shock at now finding out that this was a big fat lie. Apparently, it was conjured up by the owners of La Bodeguita to gin up business, but there is no evidence that Hemingway ever darkened the door of the joint! He did, however, hang out at La Floridita. I believe we stopped there for drinks twice and both times it was packed with a mix of locals and tourists. 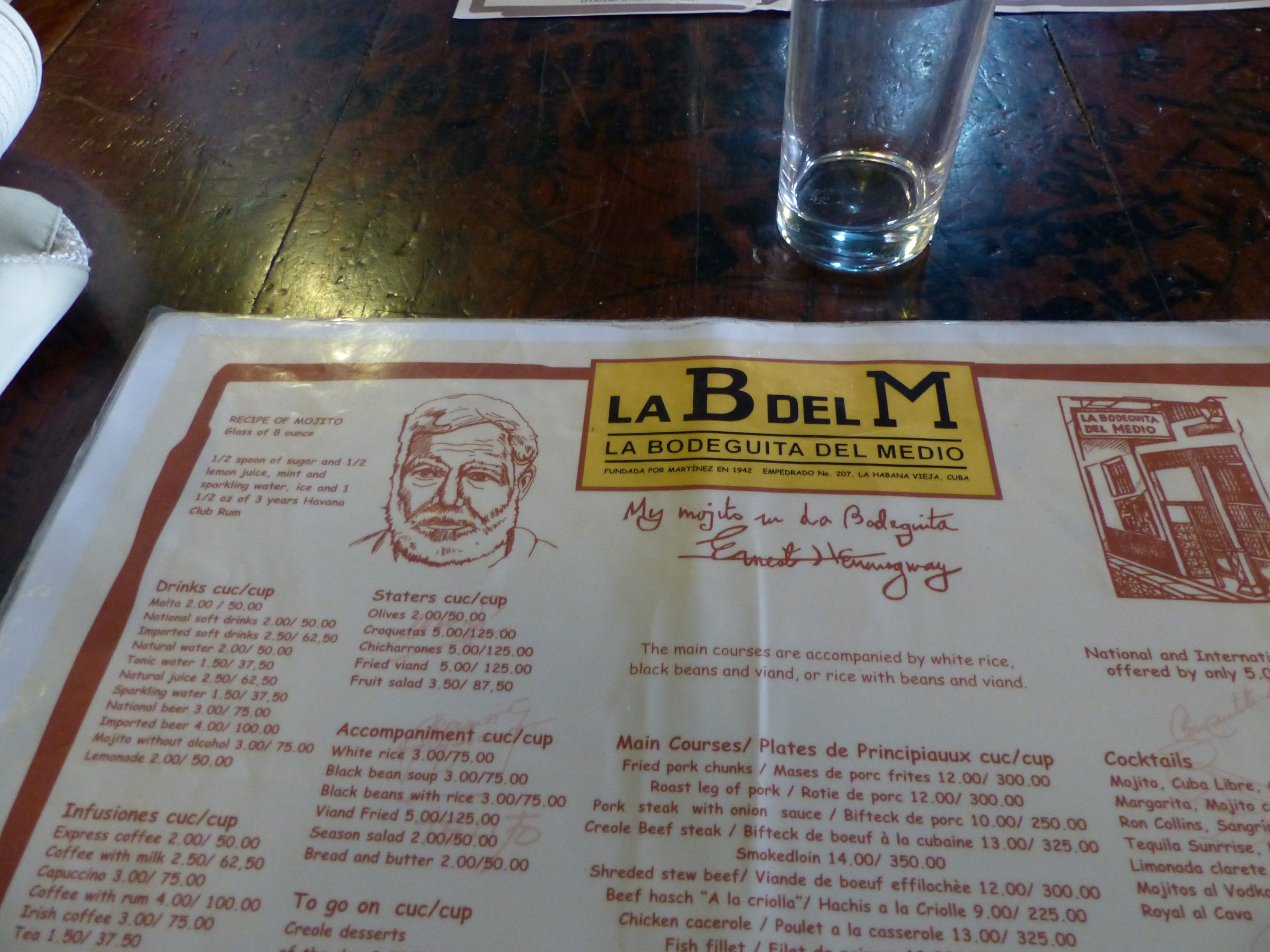 Sorry, folks, it was a PR stunt. 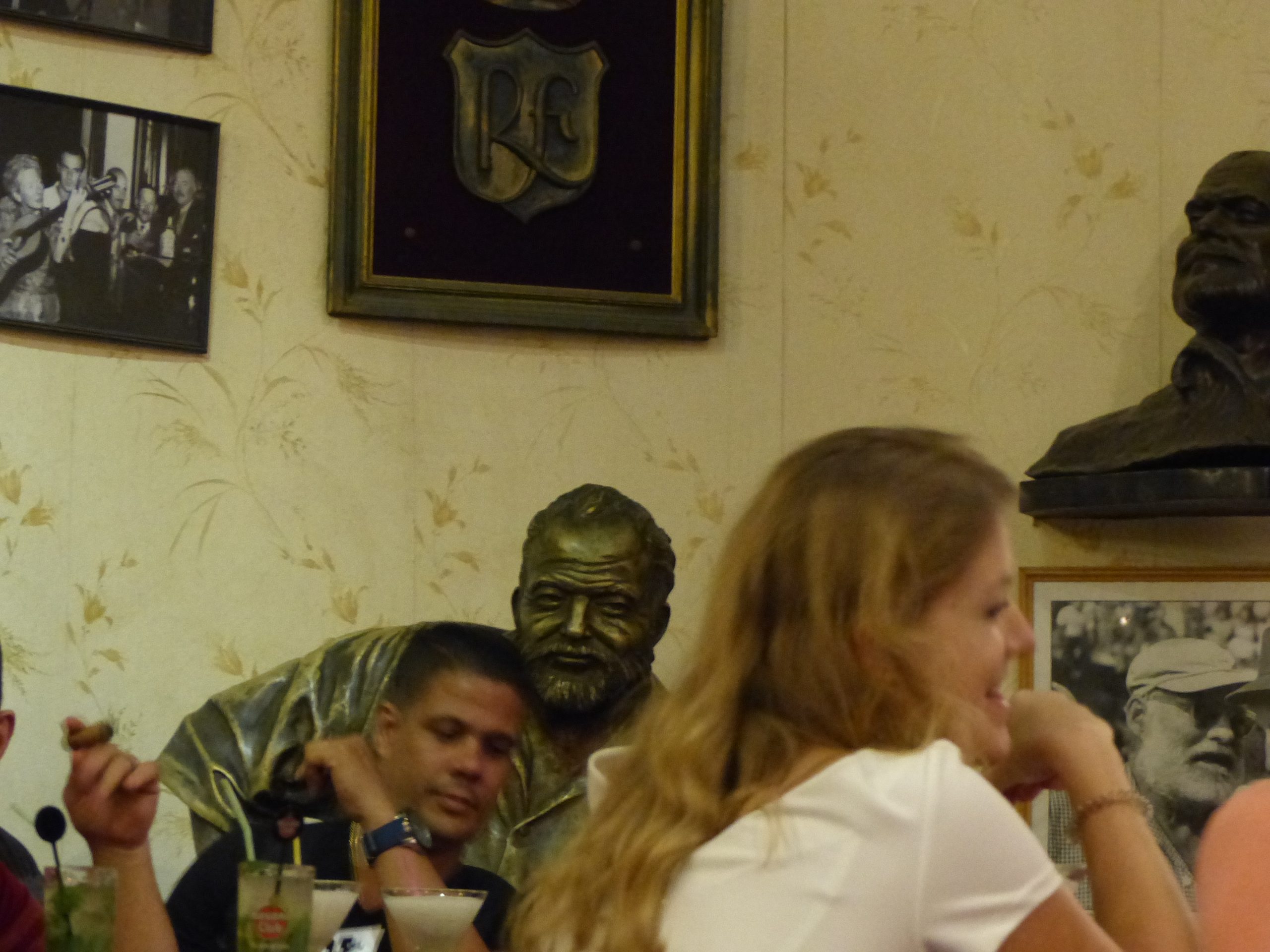 The bronze statue of Papa at the bar El Floridita, Havana. 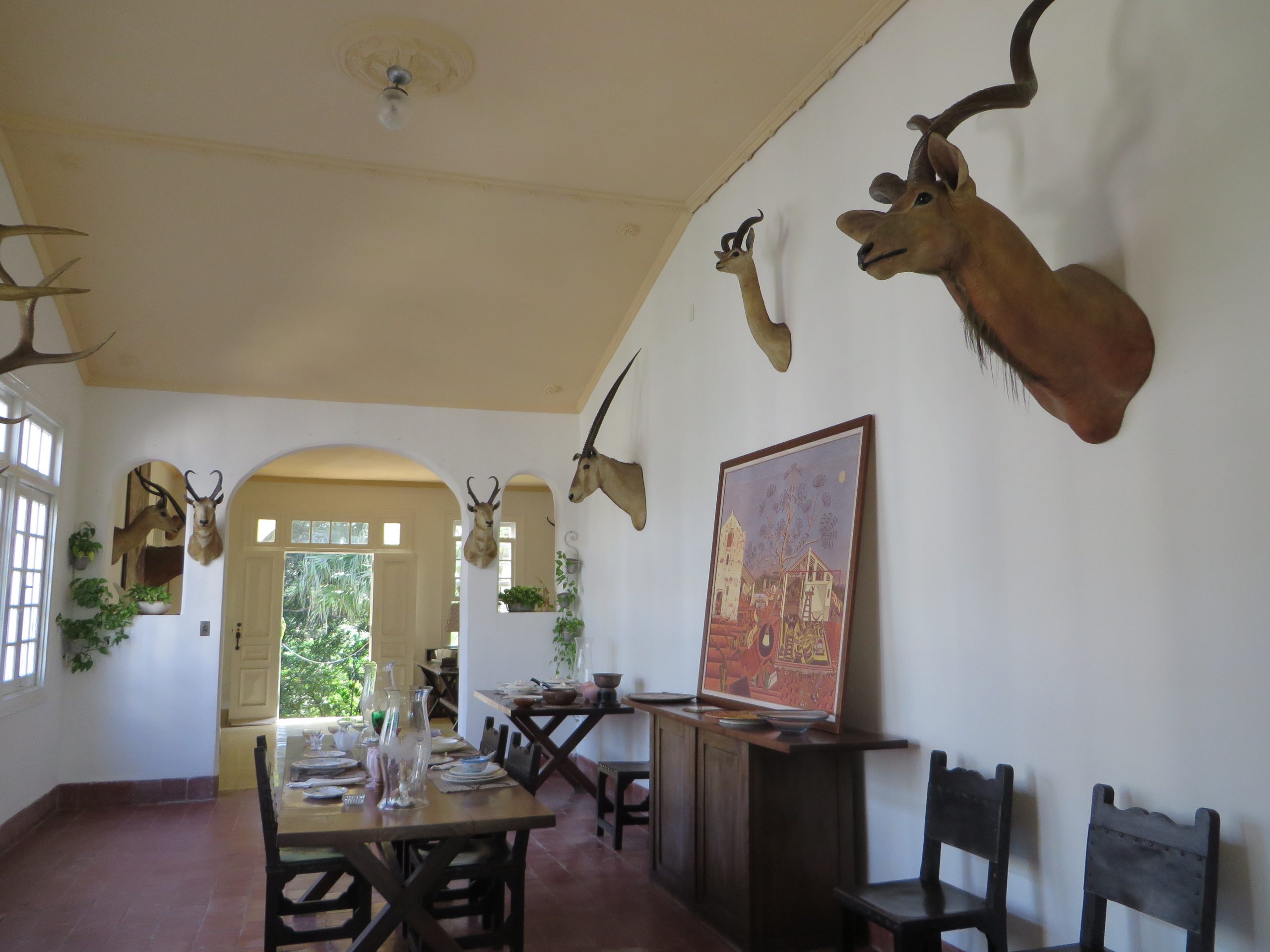 Looking in a window at Finca Vigia, the Hemingway home in Cuba. 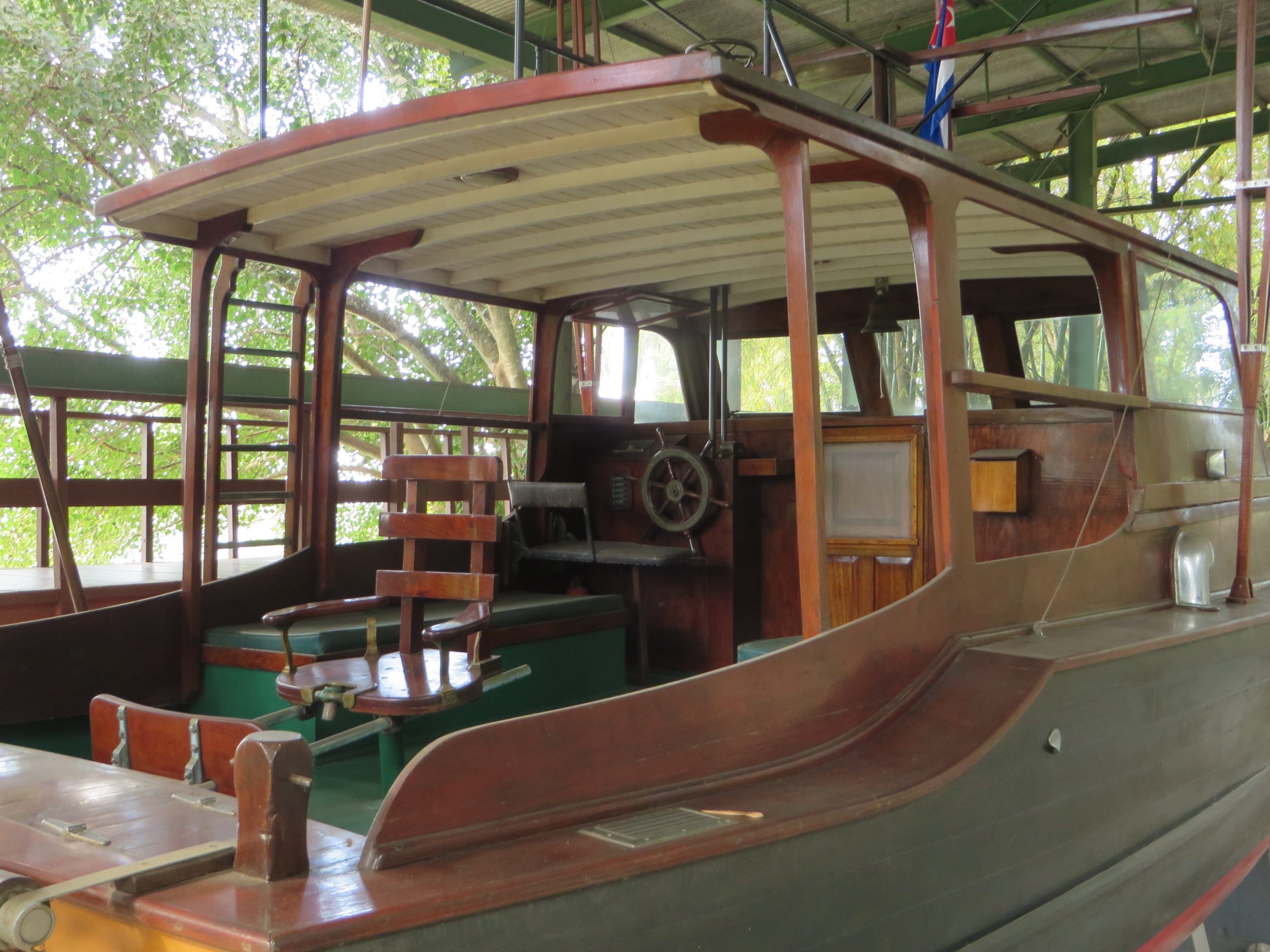 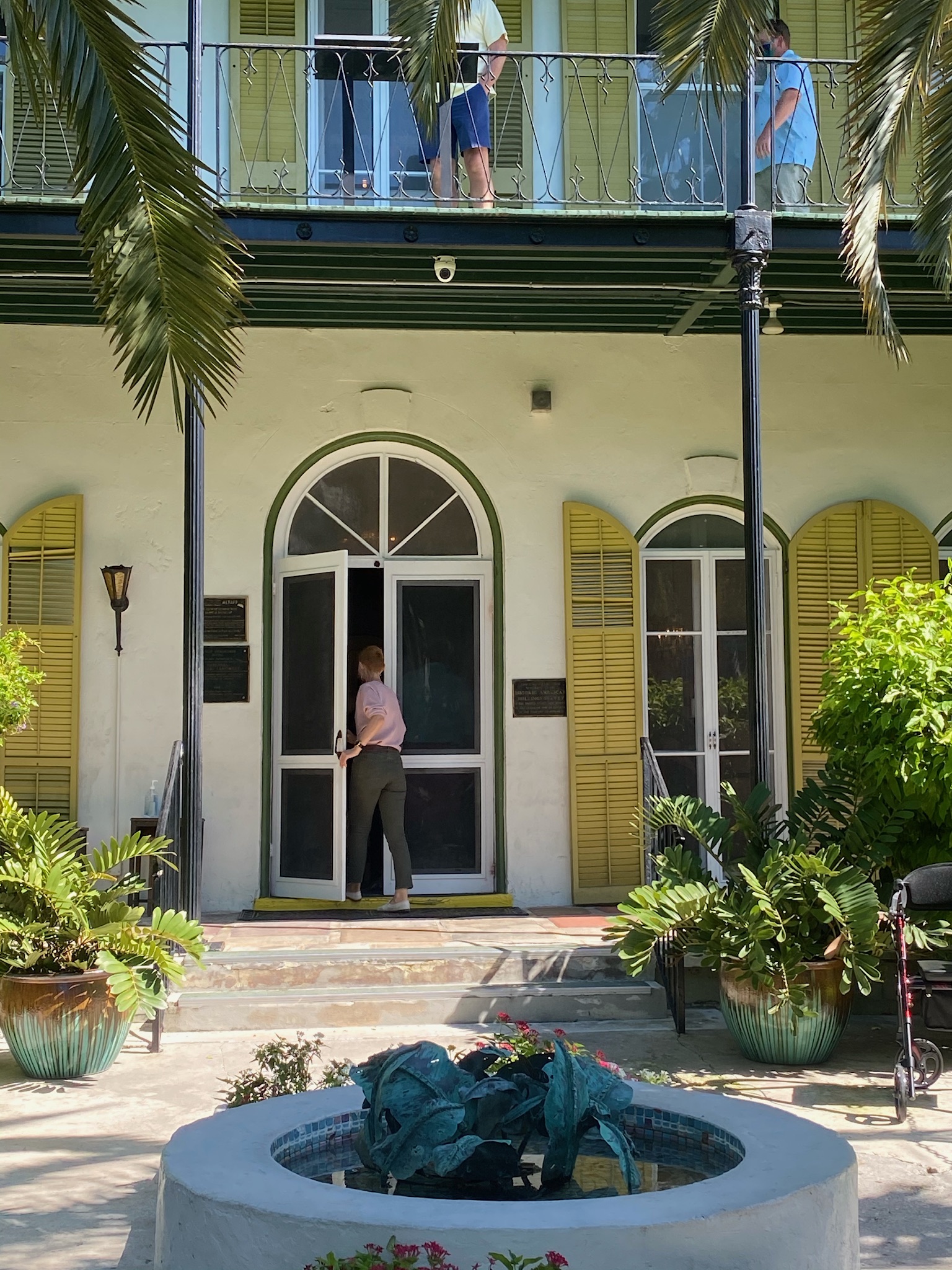 The Hemingway home in Key West. 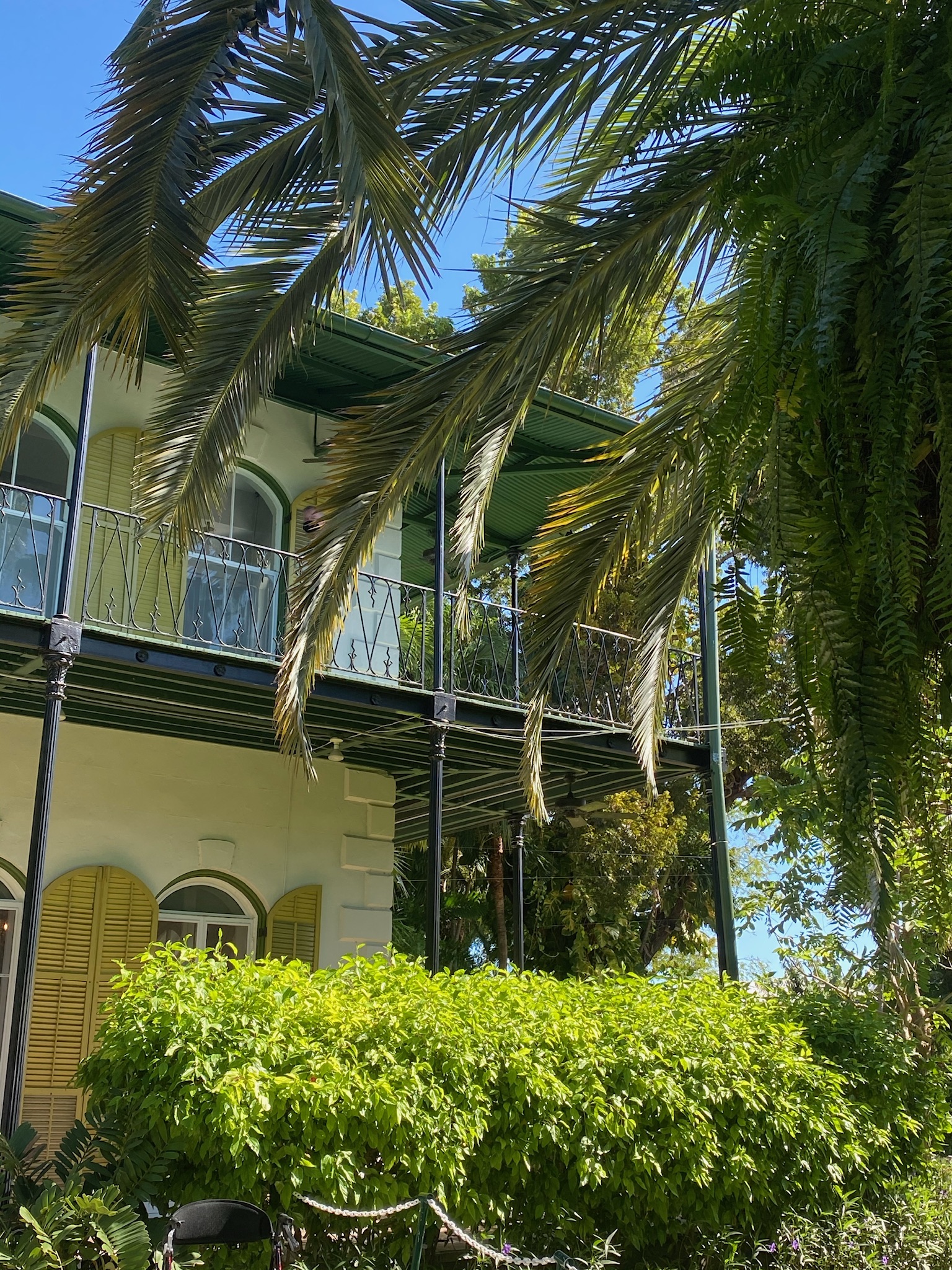 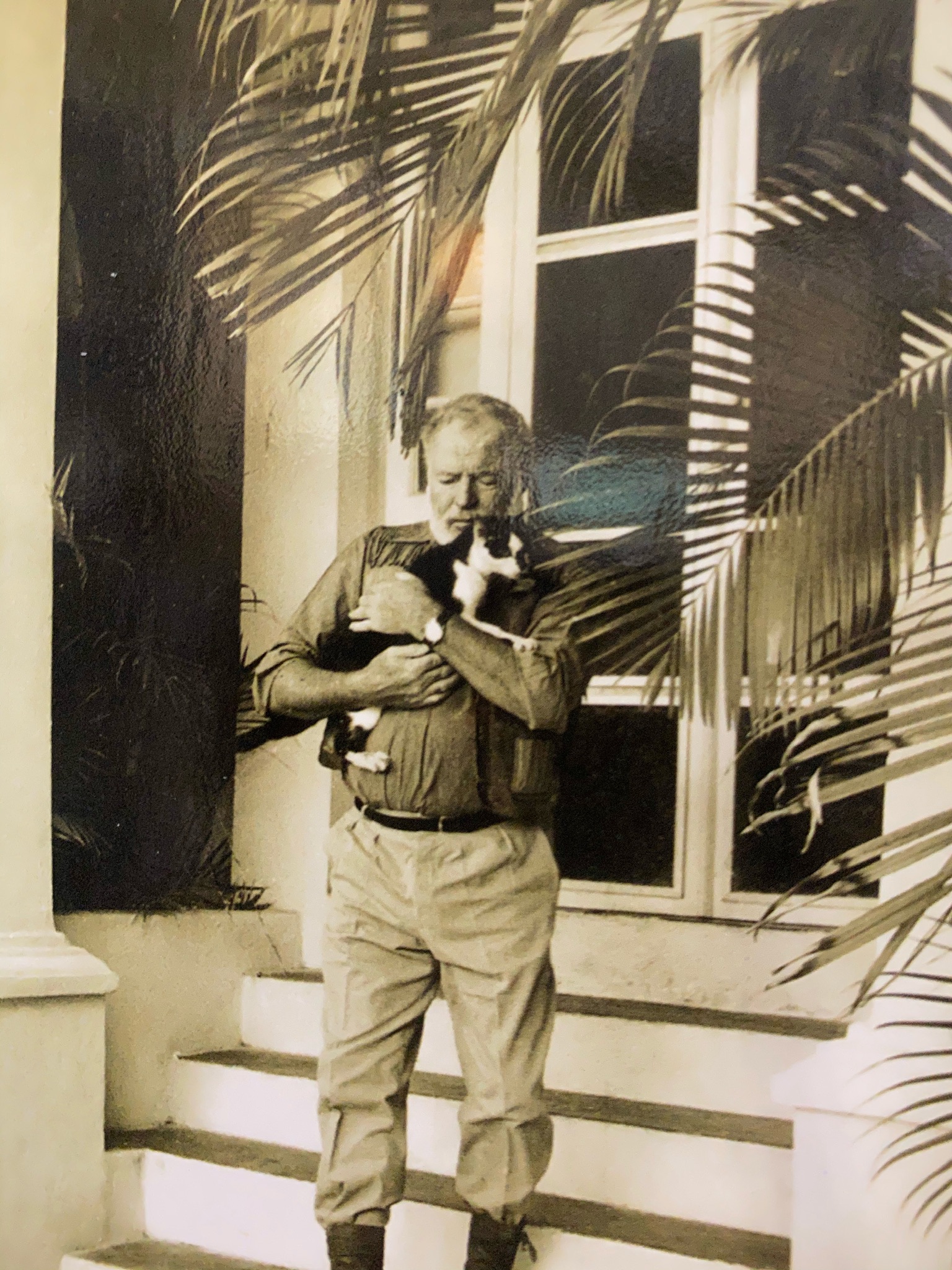 Ernest with one of his polydactyl cats.

While we were in Cuba, there was never any question as to whether or not we would visit the Hemingway home, Finca Vigia. We loved the house and grounds and swimming pool and seeing Pilar – such a great boat! How he loved that boat. So here we are on our third visit to Key West, and we are finally getting around to seeing his home here on Whitehead Street where he lived with Pauline, his second wife, from 1931 until 1939. He divorced Pauline and moved to Cuba with wife number three, Martha Gellhorn, to whom he was married from 1940 until 1945. Ernest’s study in Key West looks much like the interiors at Finca Vigia in Cuba. Here in Key West, we were allowed to go all over the home, but in Cuba, we could only peer through the windows. Even the lush tropical gardens were reminiscent of the Hemingway home in Cuba. We wanted to see the famous cats while we were there, because I figured I would like Hemingway cats more than Hemingway books, and we were not disappointed. They are everywhere. There are about sixty cats and about forty-five of them are polydactyl, which means that they have six toes on each paw. According to Hemingway lore, Ernest was friends with a fellow named Captain Harold Stanley Dexter. The captain and his white, six-toed cat named Snowball were both well regarded on the docks of Key West. Snowball produced a litter of kittens and Captain Dexter gave one of the kittens to Ernest because the writer was intrigued by the polydactyl feline. The Hemingway boys named the kitten Snow White. After that, Ernest named the offspring of Snow White after famous people and the caretakers of the property have continued this tradition. Some of the cats have even been named after Ernest’s ex-wives. However, this whole Snowball story has been disputed by a niece and one of his sons, but it really doesn’t matter. It looks like the cats are here to stay. And in these crazy times where nothing seems absolute and constant, we can all agree on one universal truth: Once you feed a cat, it’s yours. 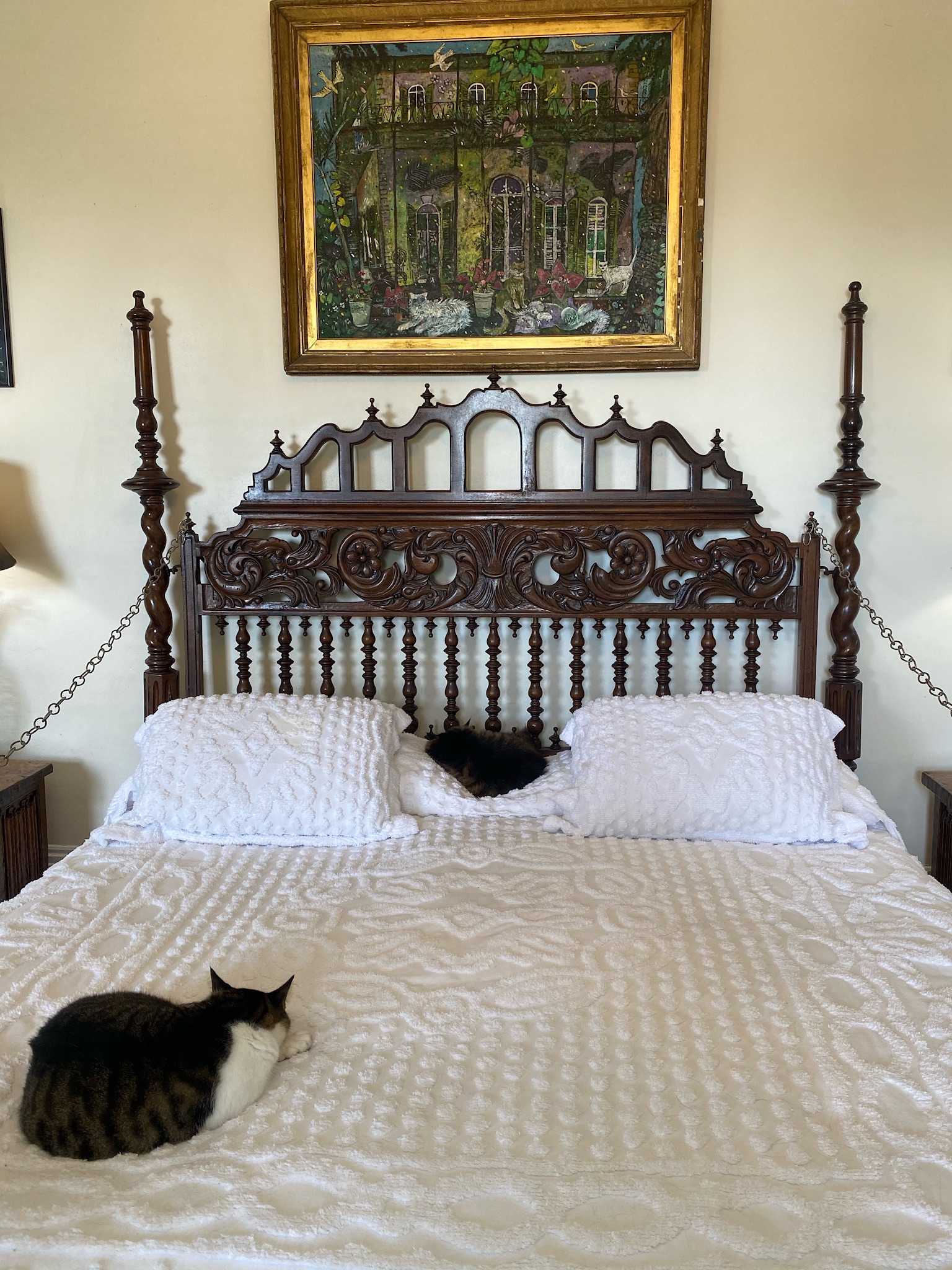 There are cats on the bed. 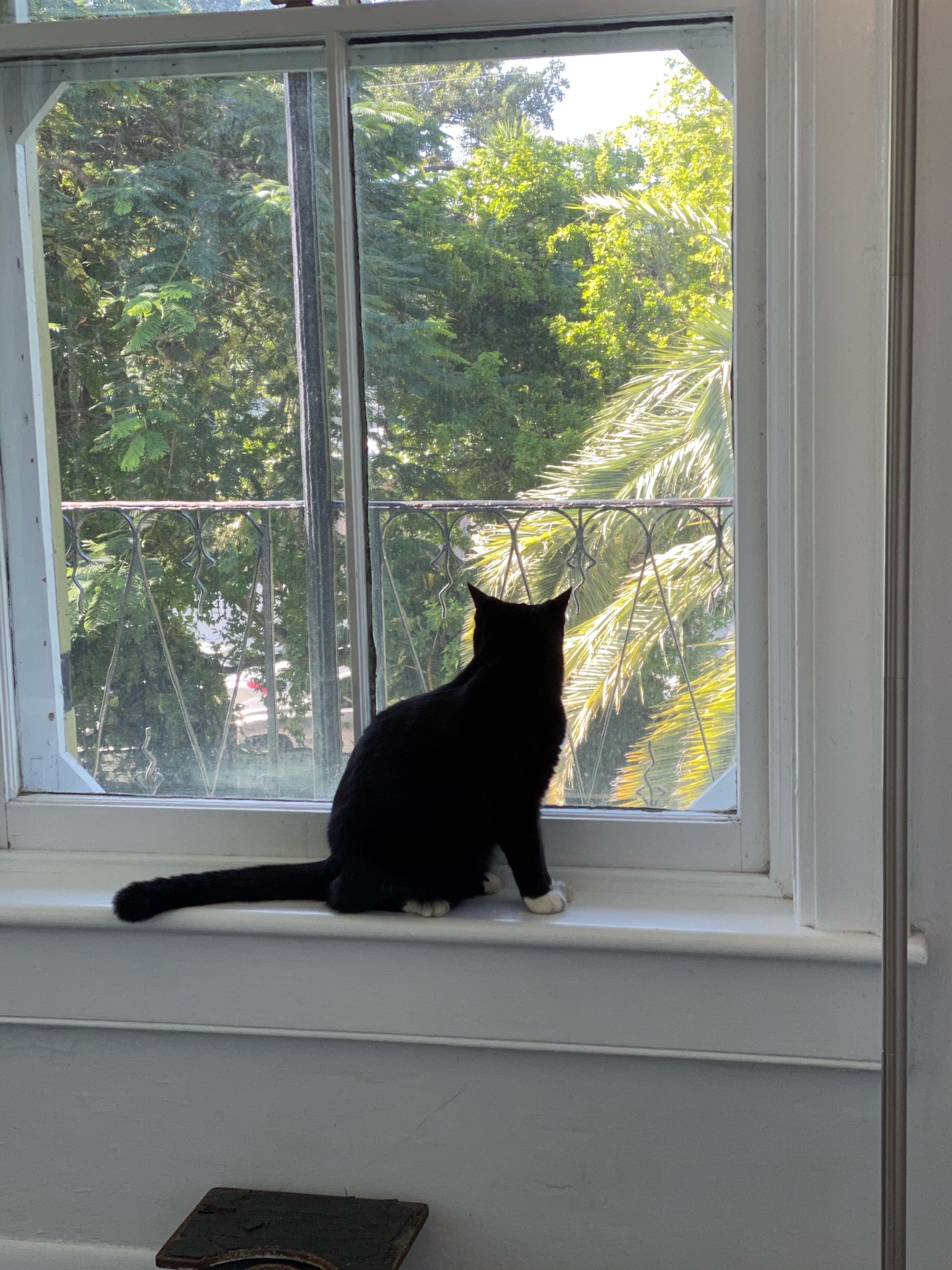 Cats in the bathroom. 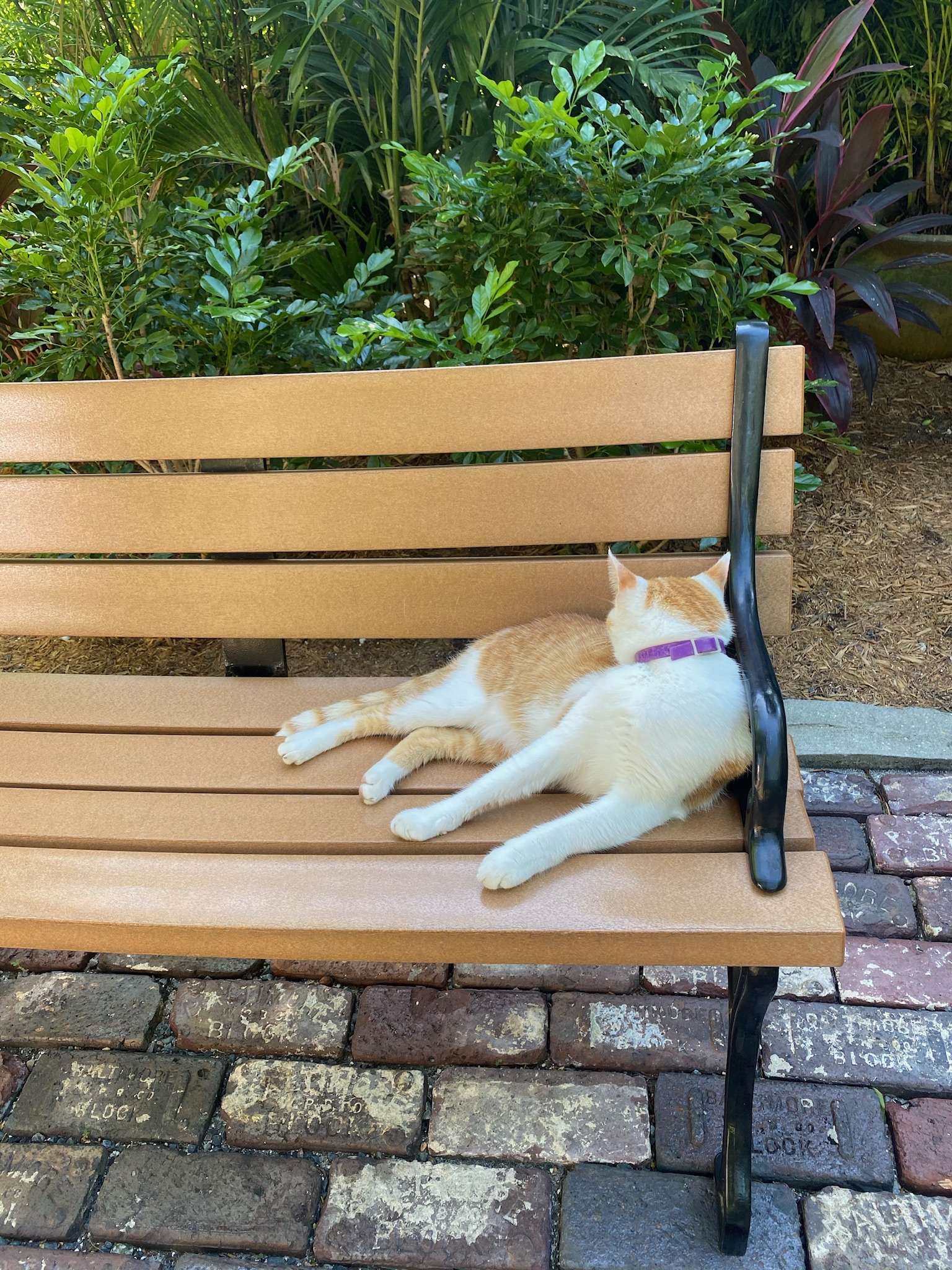 Cats on the benches. 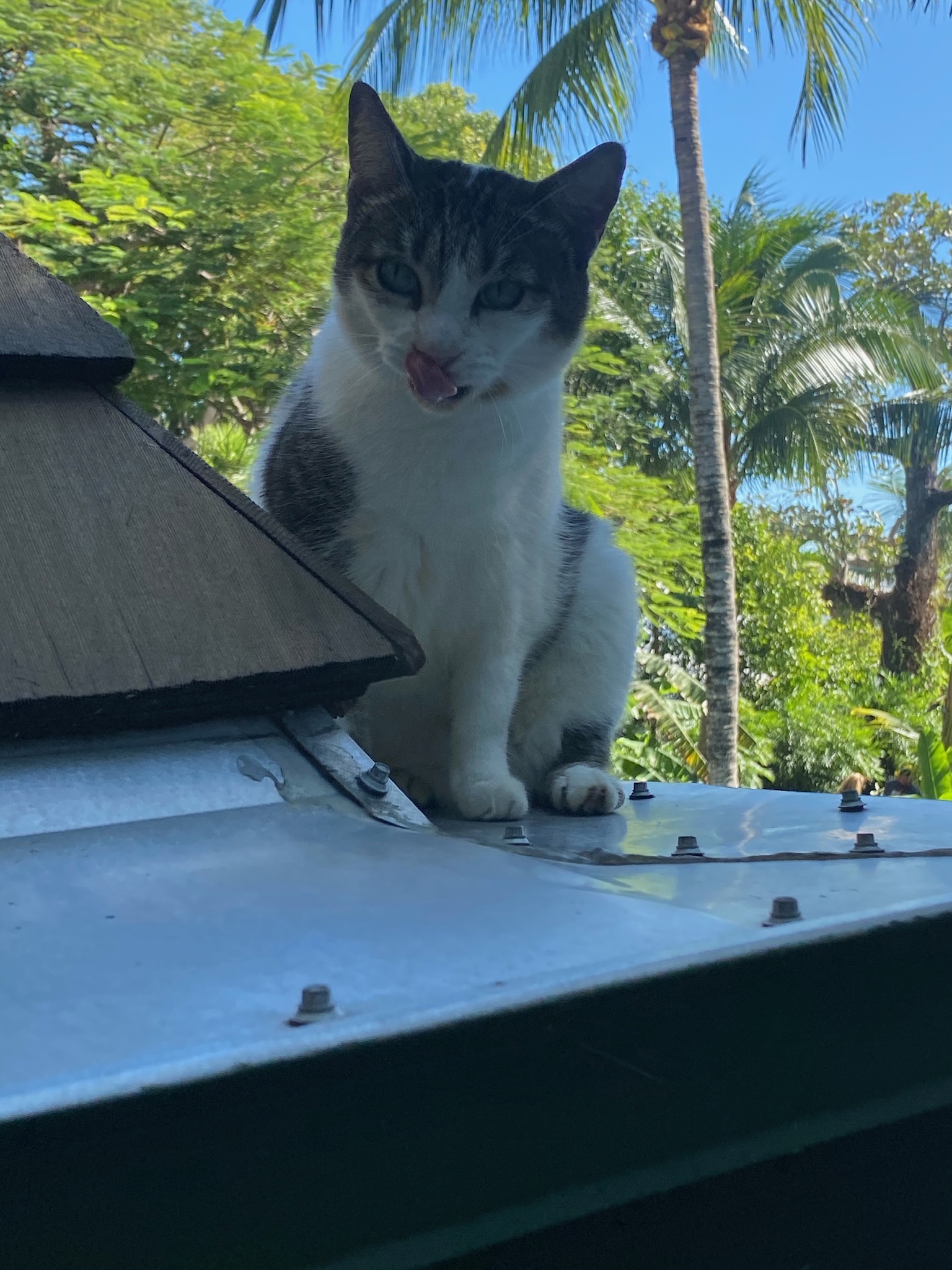 Even a cat on the roof. 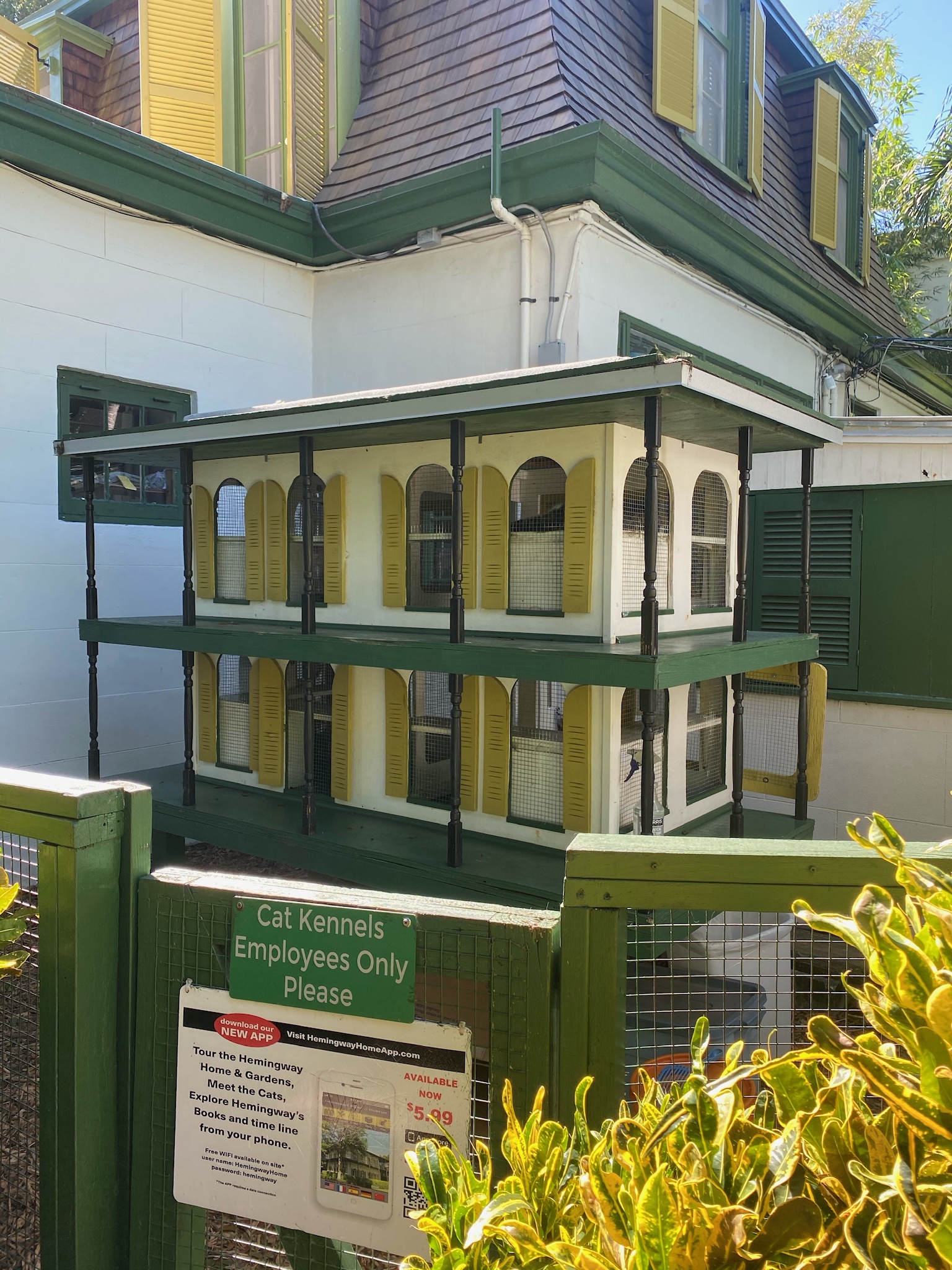 The cats retreat to the kennels when they have had enough of the visitors bothering them. It’s a replica of the house, you see. 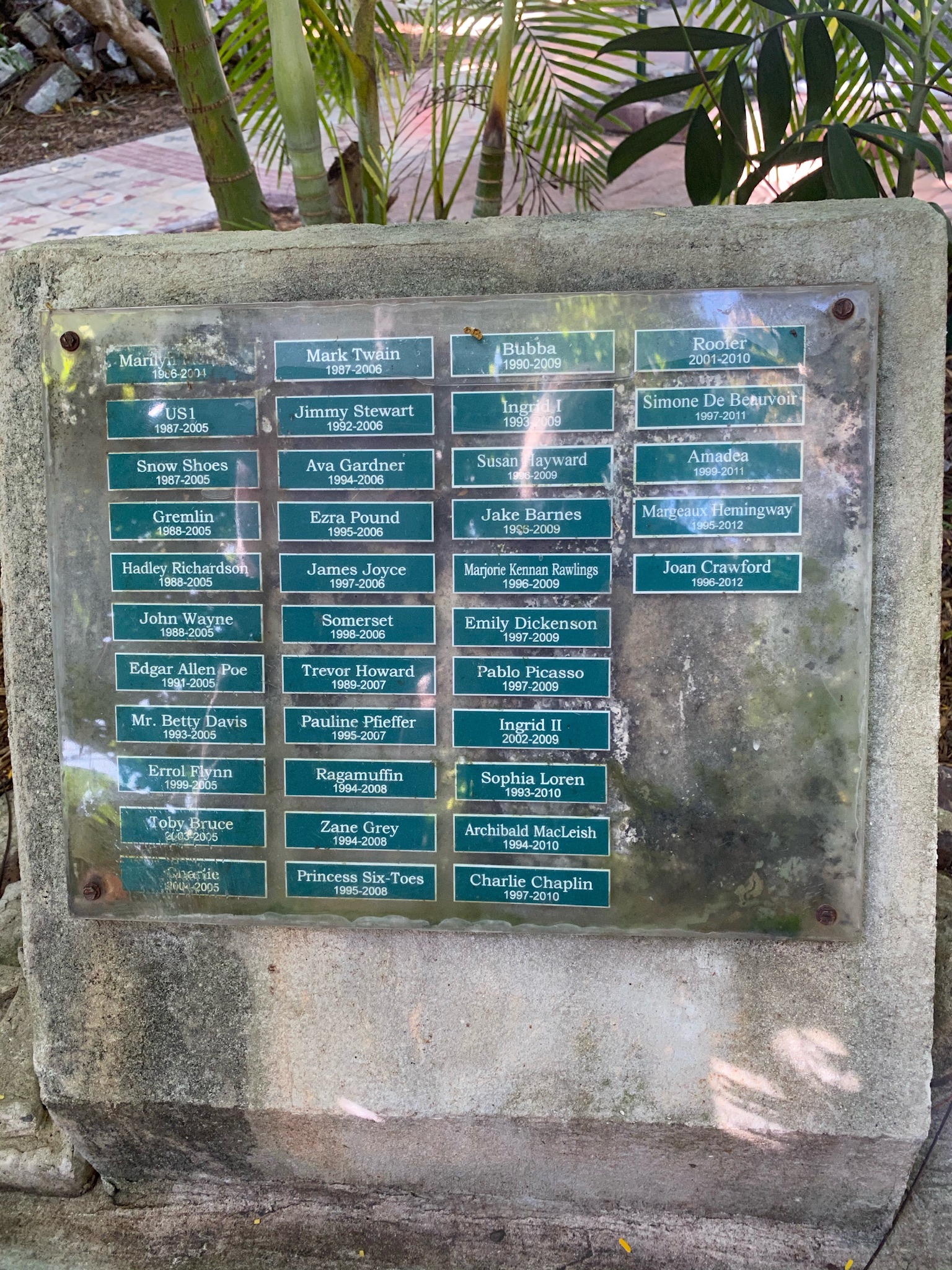 A memorial to the Hemingway cats who have gone on to their great catnip reward.