Santa Fe and the Secret City

The needle on the fun-meter of this trip shot way up as we headed south from Taos the other day. Just the sight of Taos in the rear view mirror made us smile. Our first stop was at Los Alamos, New Mexico to see the site of the Manhattan Project’s secret city. The Manhattan Project National Historical Park has finally reopened (well, sort of) after a year of “staying safe.” They dragged a table outside of the building and will talk to any (masked) visitors who come by. We also wanted to tour the Bradbury Science Museum, but unfortunately it, too, is a “dot gov” enterprise. Their website informed us that they are “closed in support of social distancing.” (Oh, how I am biting my tongue.) On the other hand, the Los Alamos History Museum is not under the auspices of the federal government, so the museum is wide open and they are busy giving great tours of the area to anyone with a little time and money. I guess they don’t have the luxury of lots of hard-working taxpayers to pay their bills, so they had to figure out a way forward in spite of Covid.

We have been eager to see the remains of the city that “didn’t exist” for a long time. We saw the home of Dr. Robert Oppenheimer on Bathtub Row and walked through the Fuller Lodge. We heard stories of life on “The Hill” from the point of view of the scientists as well as their families. It never ceases to amaze that the United States assembled the people and resources necessary to develop the atomic bomb and put an end to World War II. Whether or not you agree with the bombing of Nagasaki and Hiroshima, it’s hard to not be impressed with the sheer will of the United States scientific community and military machine to get the job done in just twenty-seven months. 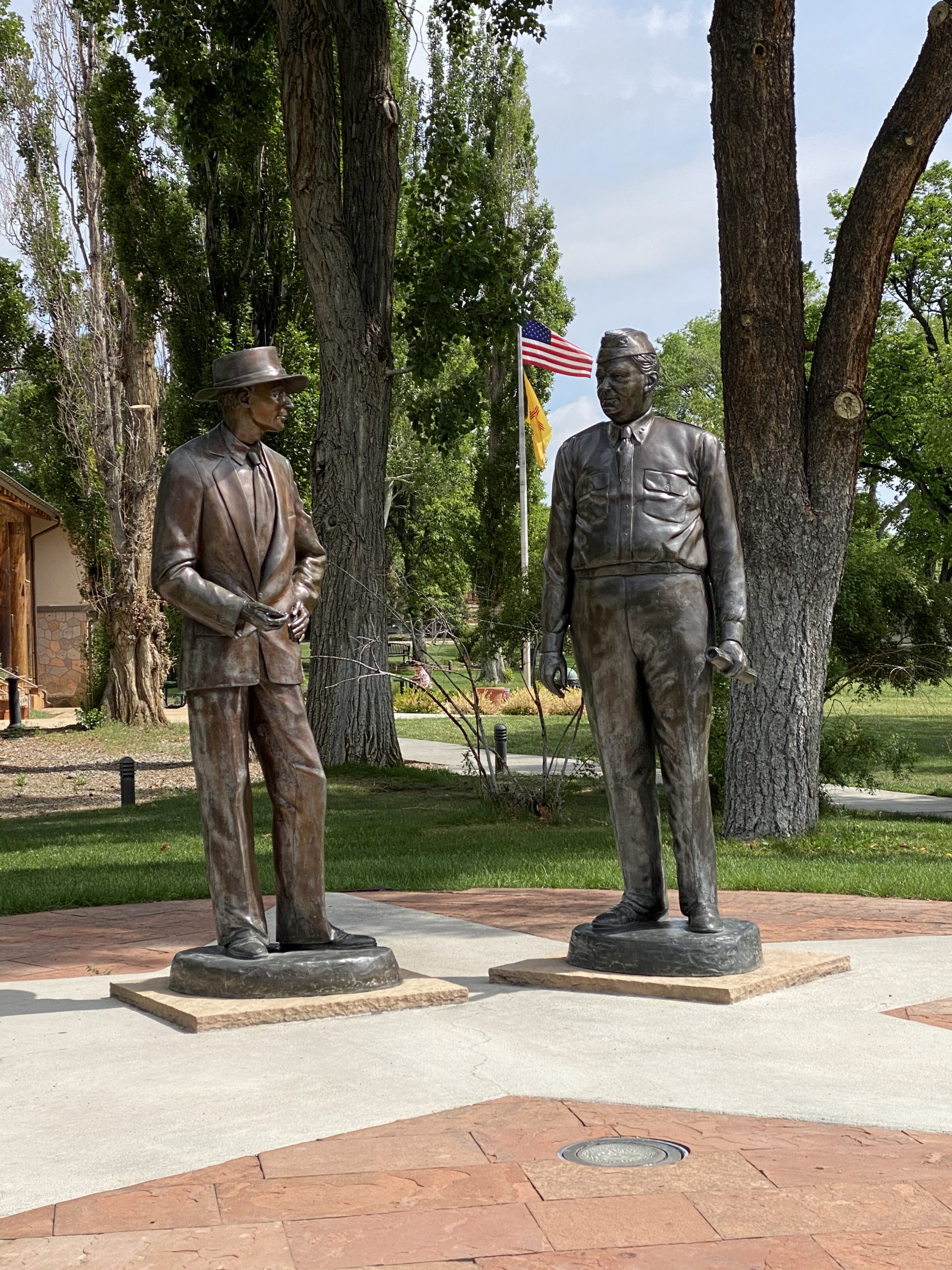 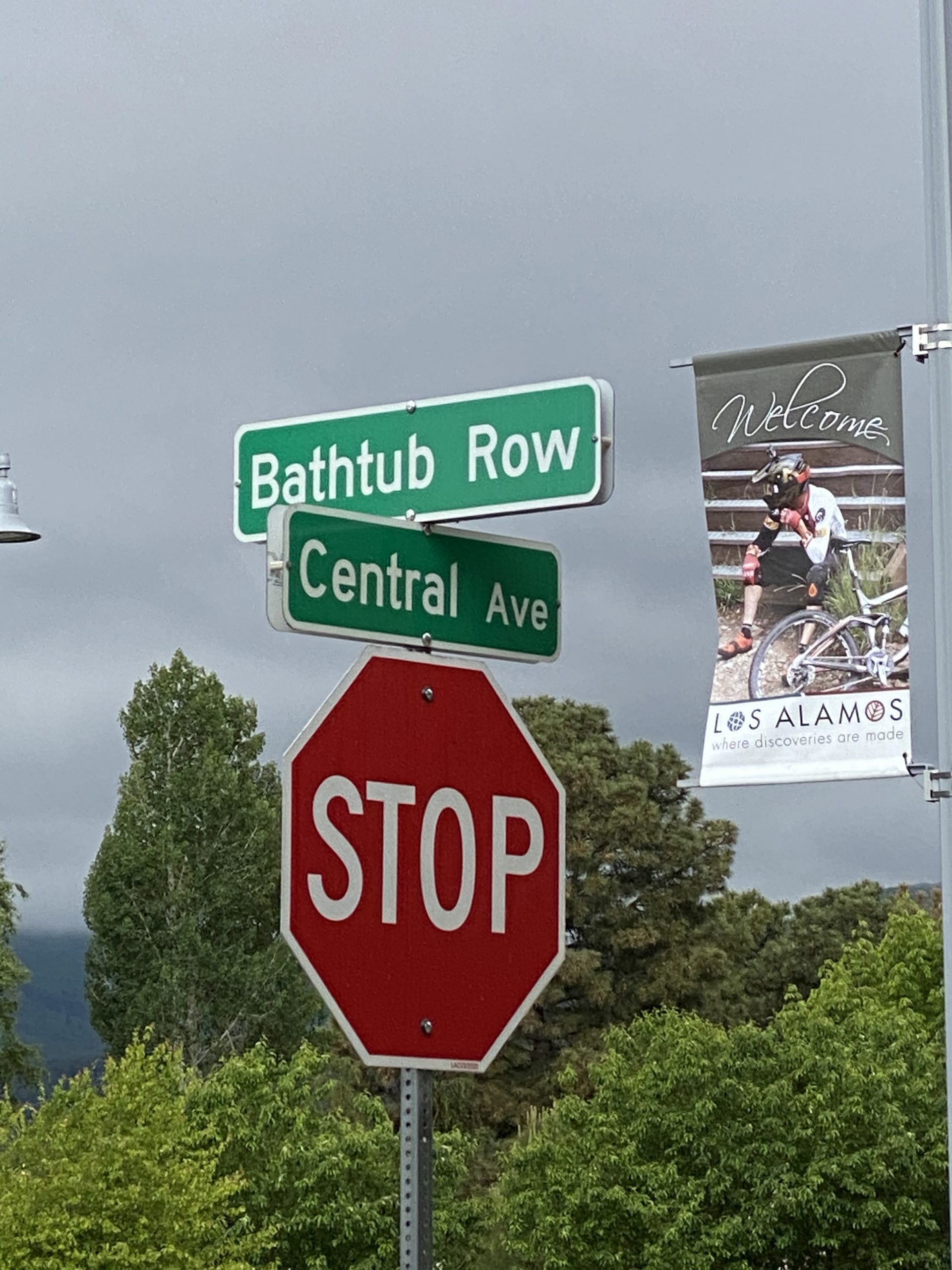 The scientists who lived on this street had bathtubs. Everyone else just had showers. Never saw Shower Circle. 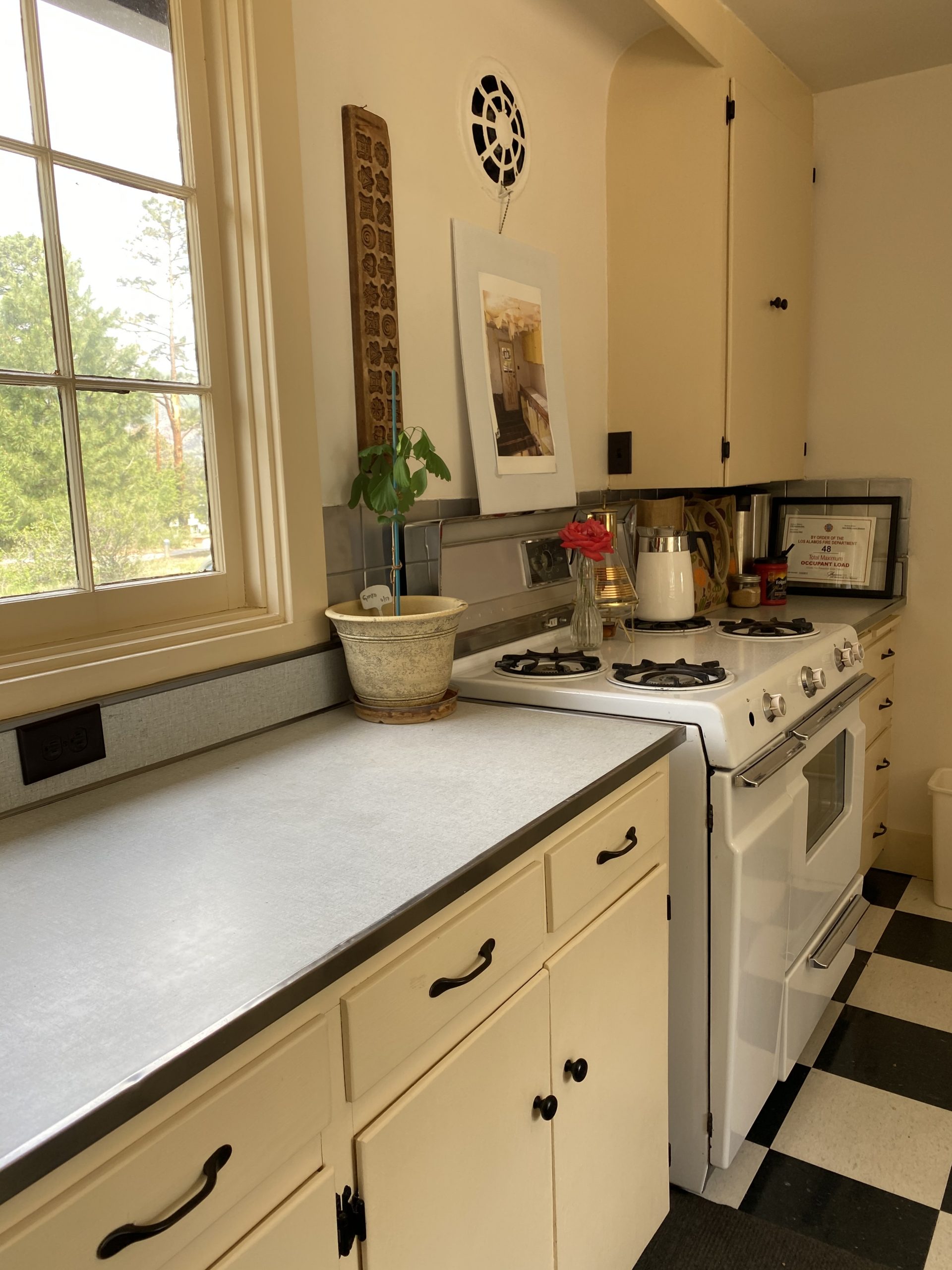 The little ginkgo sprouted from seeds from trees that survived the bombing of Hiroshima. There is a group of Americans who is striving to forge bonds of friendship with like-minded Japanese.

From Los Alamos, we drove to Santa Fe and it was even better than we remembered it from our last trip here twenty years ago. Once again, we checked into La Fonda on the Plaza. They must have missed us because we were upgraded to a fabulous suite with a fireplace and large balcony overlooking the plaza. A big rain storm moved in and dropped the temperature precipitously, which was fine with us because it gave us an excuse to call for someone to come build a fire for us. We are still shocked that we were allowed to have a real wood-burning fire in a hotel room, but it was just fabulous after dinner at Coyote Cafe. 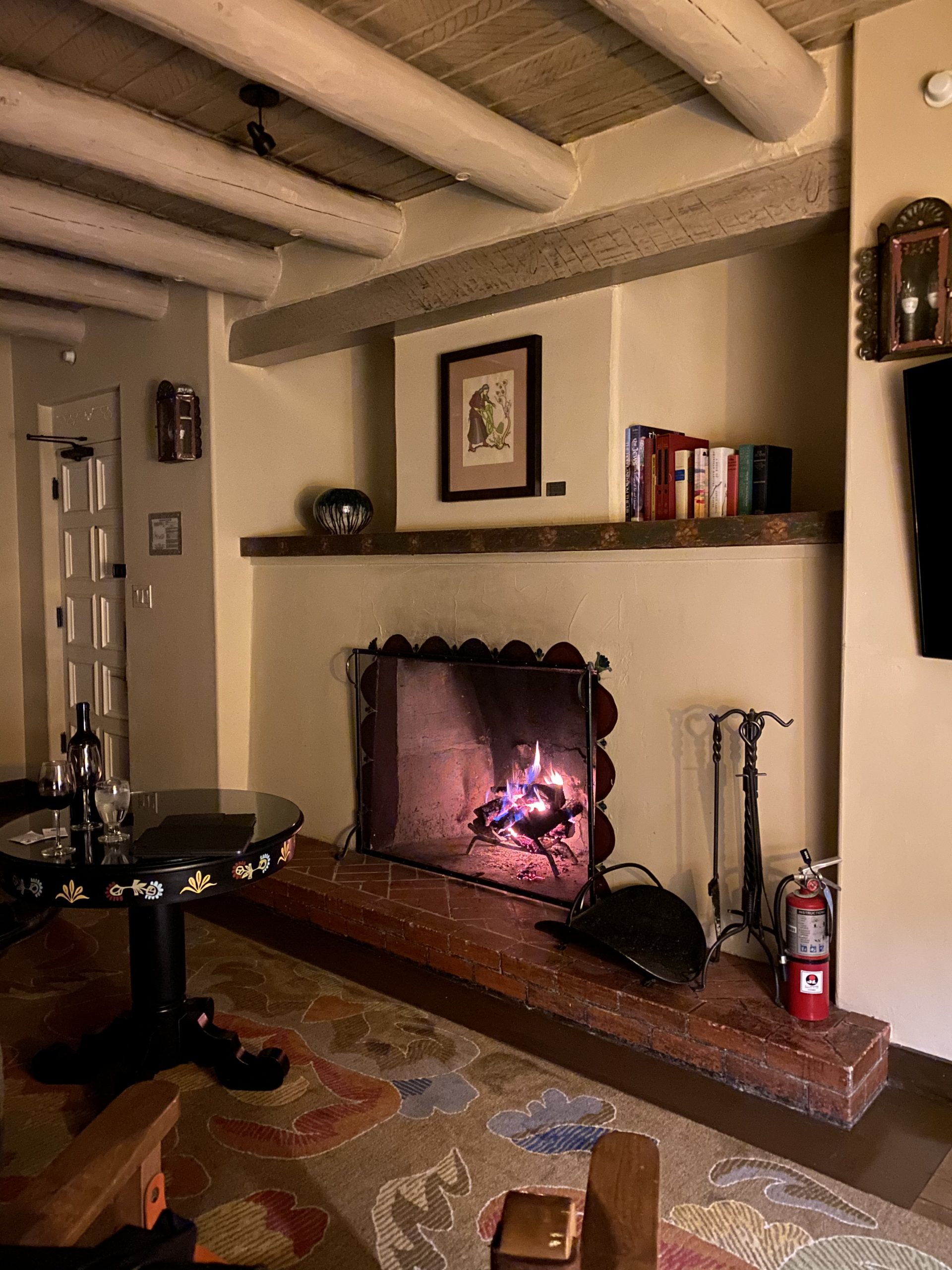 We loved our suite at La Fonda on the Plaza. 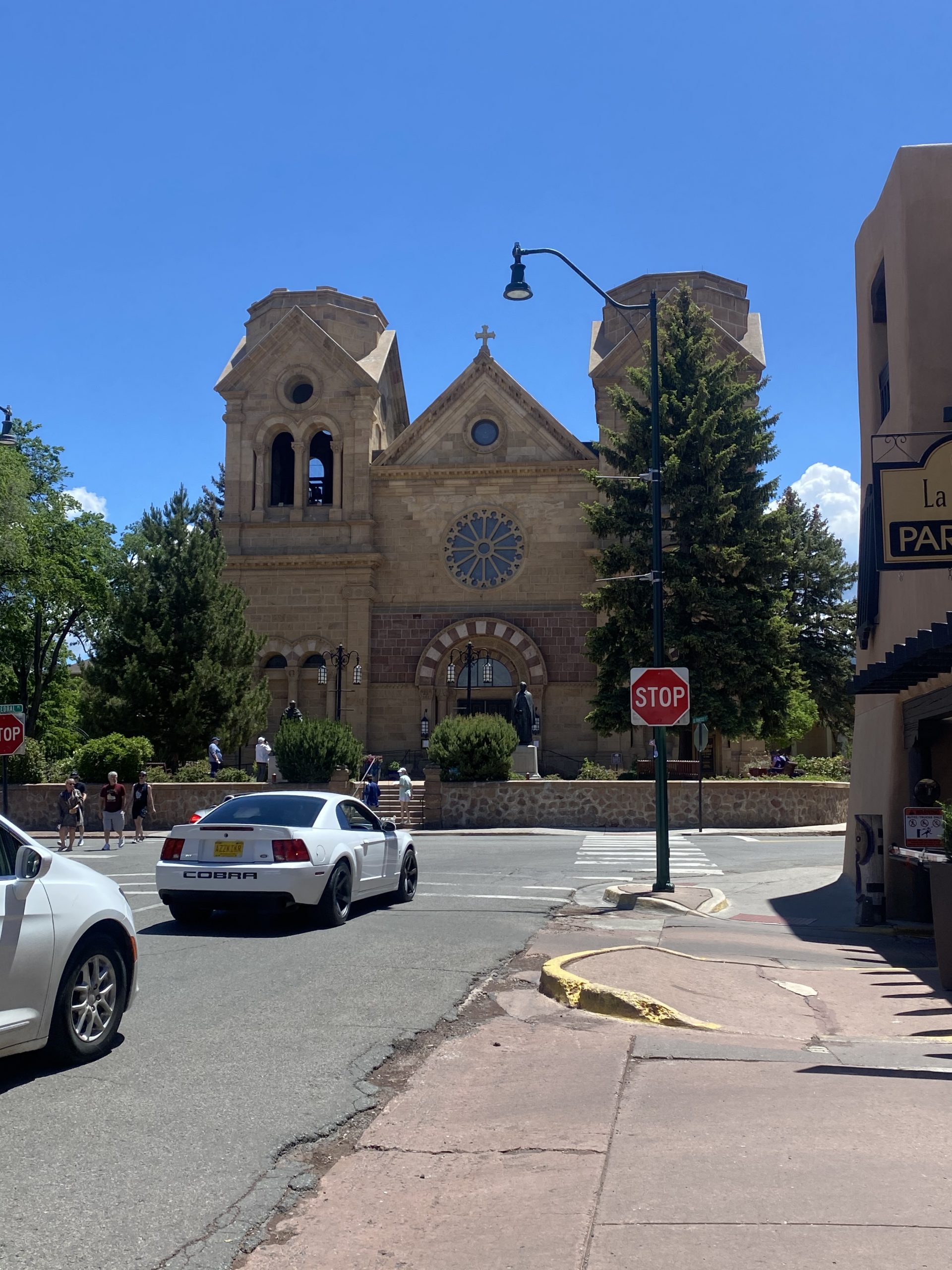 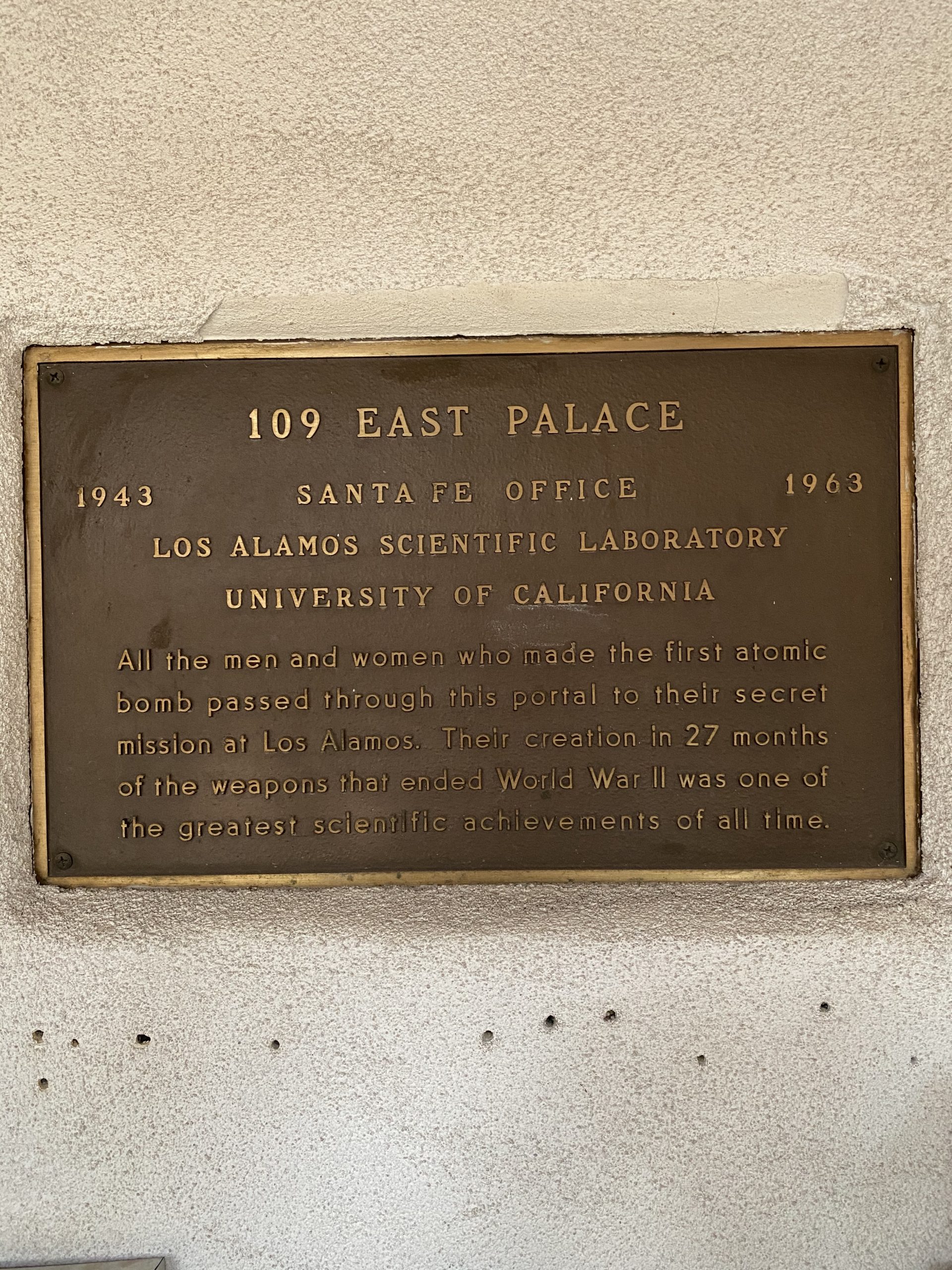 While in Santa Fe, we made our way to 109 East Palace to see the building where everyone coming to Los Alamos first stopped. What was once the bustling office of Dorothy McKibbin is now a shop called Chocolate and Cashmere.

Since Santa Fe is the capital city of New Mexico, we walked a few blocks to check out the capitol building Tuesday morning. The building is so very non-traditional. In fact, it’s round. Security was rather non-traditional, too. We just walked right in through a random unlocked door and checked out the Senate chambers as well as the House chambers. We rode the elevator to the top floor to take a look at the state seal in tile on the first floor below and there we found the office of the governor. Again, no one stopped us to find out who we were or why we were wandering around the building sporting a backpack. It reminded me of a more innocent time in our nation’s past. It was nice not to feel like an enemy of the state just for being there. 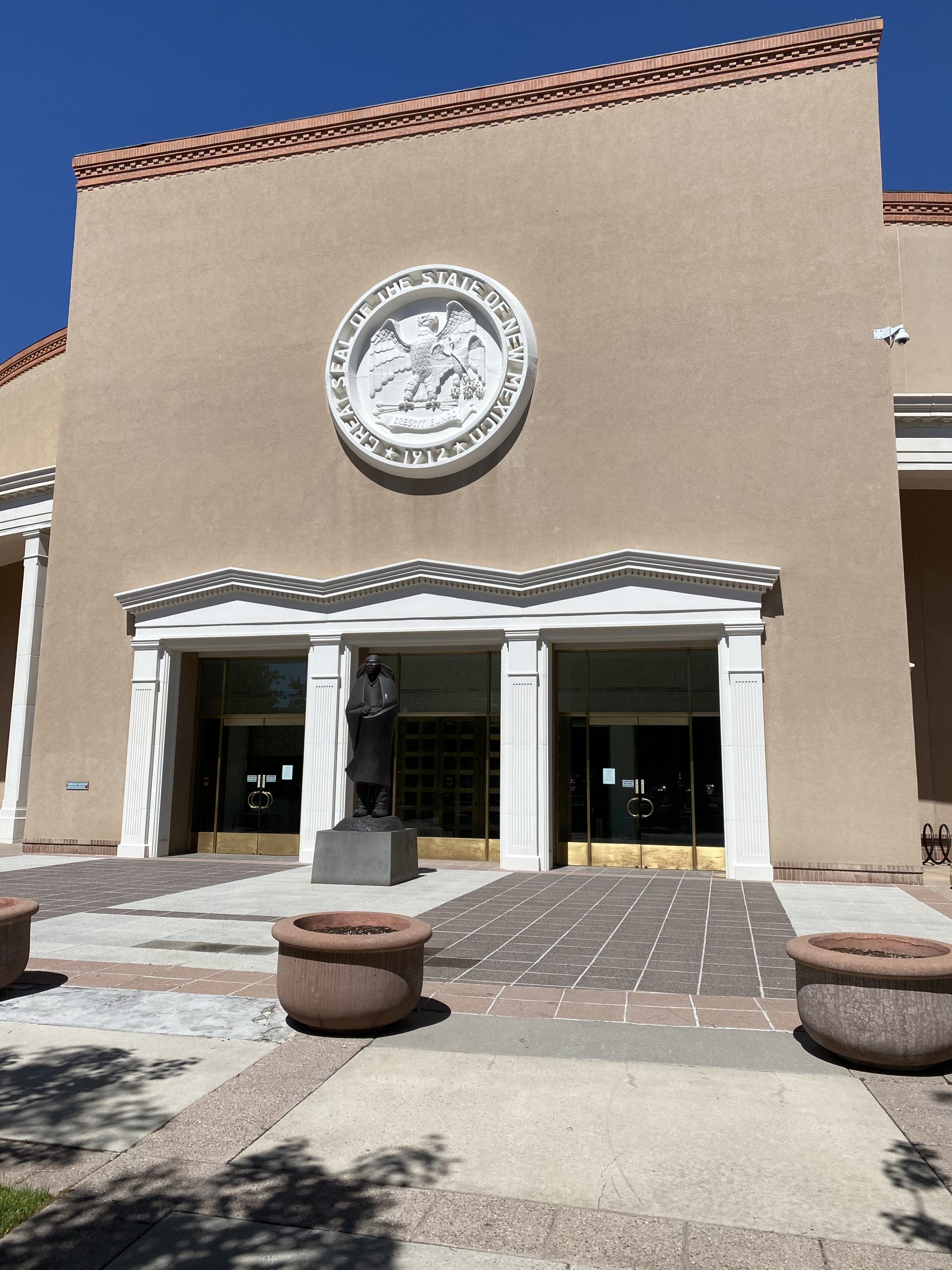 It’s hard to tell from this picture, but this state house is round. 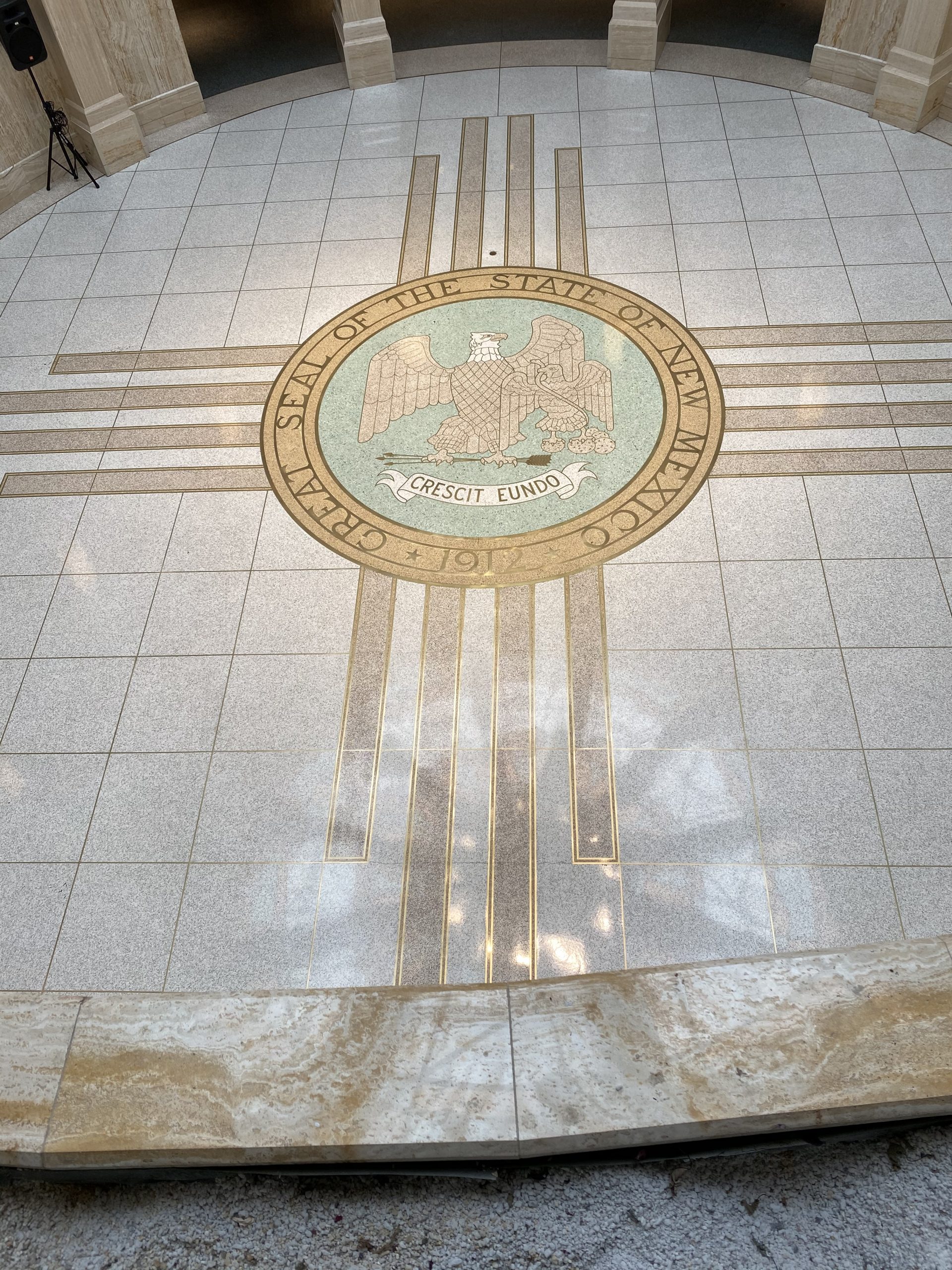 The building is filled with art. We surmised from our time here that New Mexicans really value all kinds of art. Everywhere you look, you will see sculptures in stone, bronze, and iron as well as paintings in all sorts of media. The art is as diverse as the people, and that’s a really diverse bunch. You have Anglos, Mexicans, Hispanics, and Indians. (BTW, here it’s not disrespectful to call Native Americans by the name “Indians” here. They are apparently totally cool with being called Indians. New Mexico is home to the Navajo, Apache, Comanche, and Pueblo Indians.) You will find a lot of traditional art, but there is also a lot of modern art. If you love art, New Mexico is your kind of place. Maybe that’s why they call it “The Land of Enchantment.”

I wrote this post on June 1, but due to problems getting the posts published, I am a bit behind. This is the last post from the Southwest. Next, I will send the posts from New York’s Hudson Valley.