A Day on the Mighty Hudson 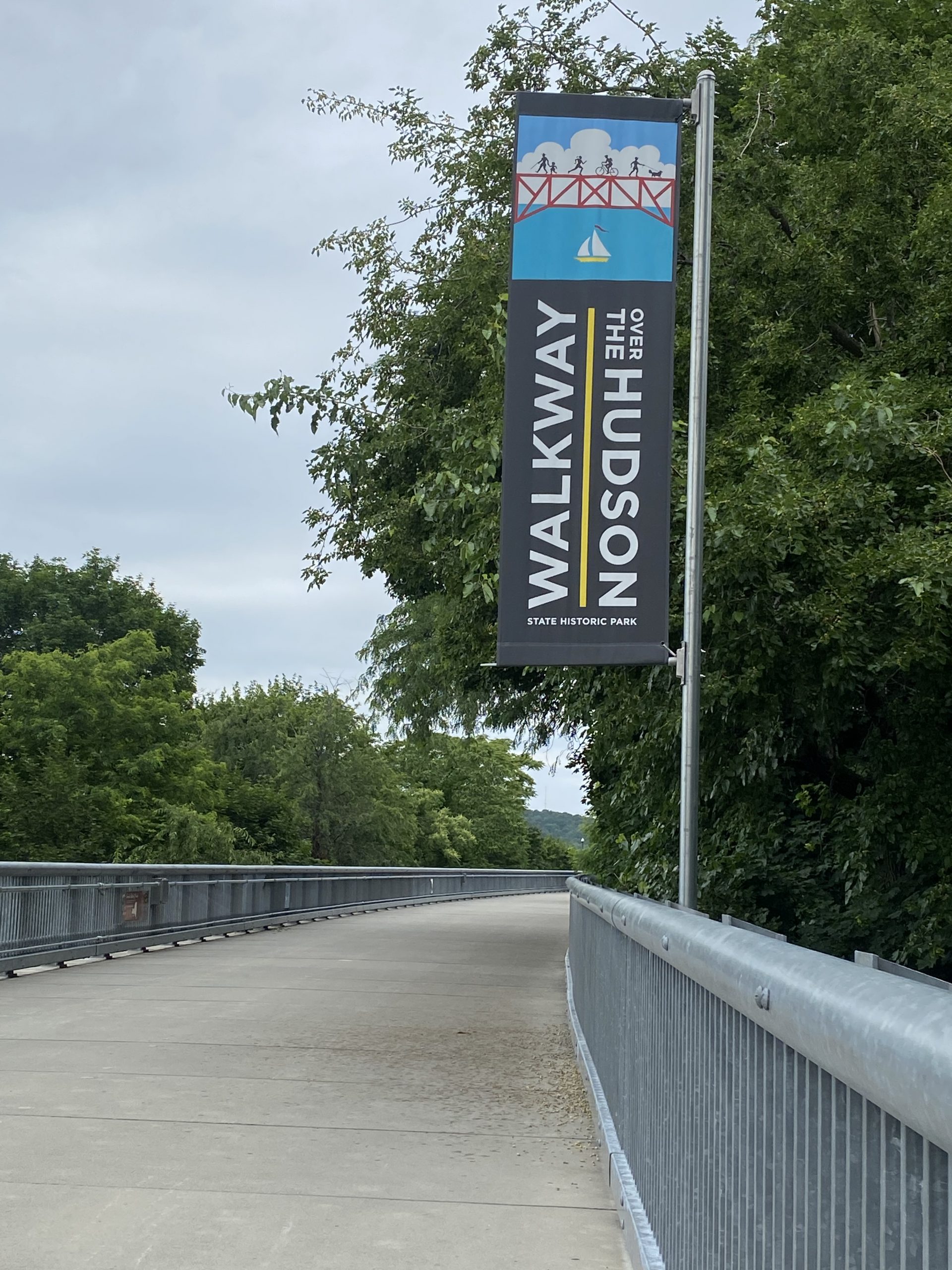 The Savannah River has always coursed its way through my life. It was there when I was growing up in Aiken and I again find myself near its banks, so having a river as a part of my life is not at all odd to me. I love being close to water. Mudlarking along the Thames with an archaeologist was fascinating and we have all of our “treasures” displayed in a shadow box frame. Seeing the Nile was almost a religious experience for us. I am actually reading a book about the Seine right now and I am having a hard time putting it down. So we were pumped to join hundreds of people on a Sunday morning on the Walkway Over the Hudson and to learn about the mighty Hudson River. We had no idea that it was tidal and that the river rises and falls with the rhythm of the tides from all the way from Manhattan to Troy. It reverses it’s direction of flow through the tidal changes, so it is brackish when the seawater meets the run-off from the mountains. This makes the Hudson an estuary. When soft shell crabs were offered on the menu our first night here, we assumed that the crustaceans had been flown in and we scoffed at the idea of eating something that followed us here from the coast of a southern state, only to learn Sunday that they were sourced locally. Blue crabs migrate up the estuary in sufficient quantities to support a small local commercial fishing industry. Fishermen haul in striped bass and sturgeon as well.

Originally, the bridge opened in 1889 as the Poughkeepsie-Highland Railroad Bridge. It linked the industrial northeast with the developing midwest. Back then, it was the longest bridge in the world. It was painted black during World War II to make it less visible in the event of an attack. A fire, probably started by a spark from the train’s brakes, destroyed much of the track in 1974 and ended the era of rail traffic for that span. But in 2009, after decades of work to make it happen, the Walkway Over the Hudson opened.

The span is 212 feet above the Hudson River and is 1.28 miles across. It is a gateway to the Empire State Trail, which is a whopping 750 miles long and is enjoyed by bikers and walkers as they traipse all over the state. The Walkway Over the Hudson welcomes over 600,000 people every year from all over the world. 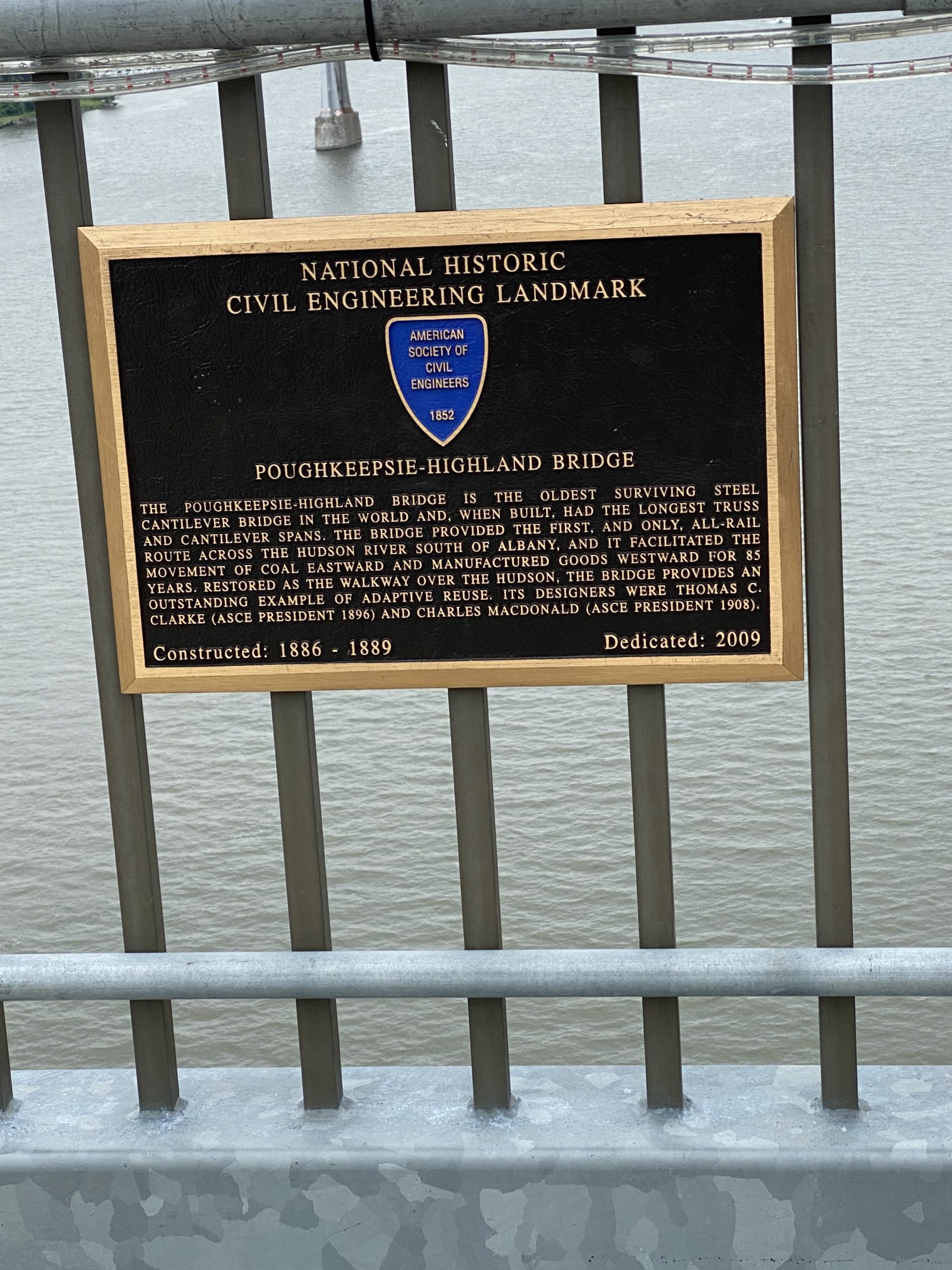 After lunch in Beacon, NY, a town with a very interesting history involving George Washington, we jumped on a boat for a ride out to Pollepel Island in the Hudson  River to  see the Bannerman Castle. A foundation is trying to save the crumbling old castle built by Frank Bannerman beginning in 1901. This Scottish immigrant had been stockpiling all sorts of weapons, armaments, and supplies of war in New York City and selling his wares to movie companies, museums, and even to other countries. He essentially gave birth to the concept of the army/navy surplus store. City officials “suggested” that perhaps he should consider moving all of that hazardous stuff out of heavily populated downtown Manhattan. He thought that was a pretty good idea, so he bought Pollepel Island and started moving his merch to the warehouses and the castle that he built out there. He had a lot to move and it took nine years to transport all his inventory to the island. Along the way, he built a summer home for his family. But Frank Bannerman was a frugal man; if you go there, you can see where he used bayonets removed from rifles as rebar in the walls of his castle and his summer home. Long story, but there were explosions and fires over the years and the castle is in disrepair, to put it mildly. The Bannerman Trust hopes to salvage what is left of the castle and perhaps use it as a amphitheater or some type of entertainment venue. 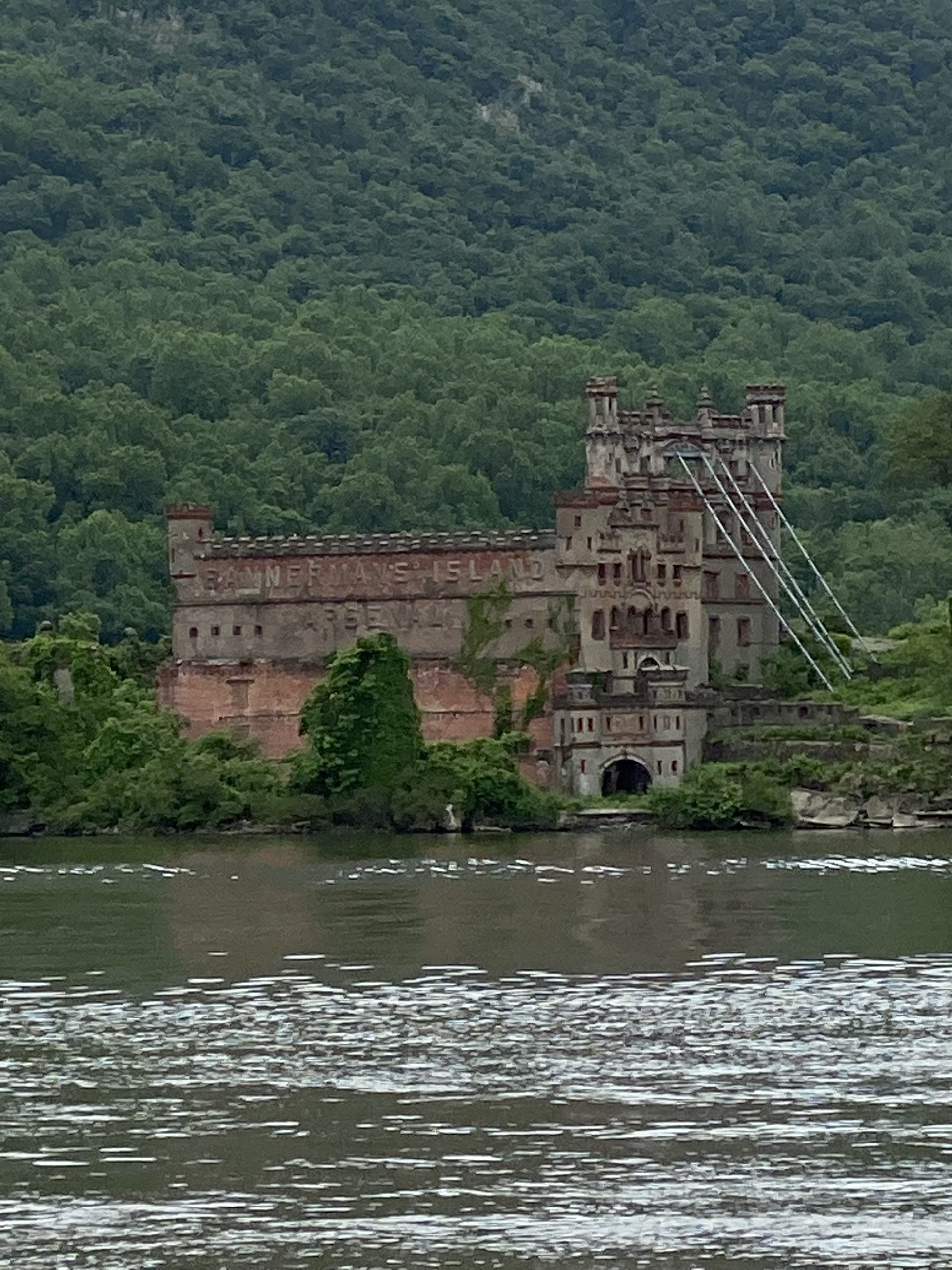 Approaching Bannerman Castle and Pollepel Island on the Hudson.

Yeah, it’s a quirky place, which is why we wanted to see it. No doubt, it captivates the imagination of boaters as well as commuters riding the train along the shore. And, as we all know, sometimes truth is indeed stranger than fiction, and this castle on the only island in the  Hudson River might just be proof. 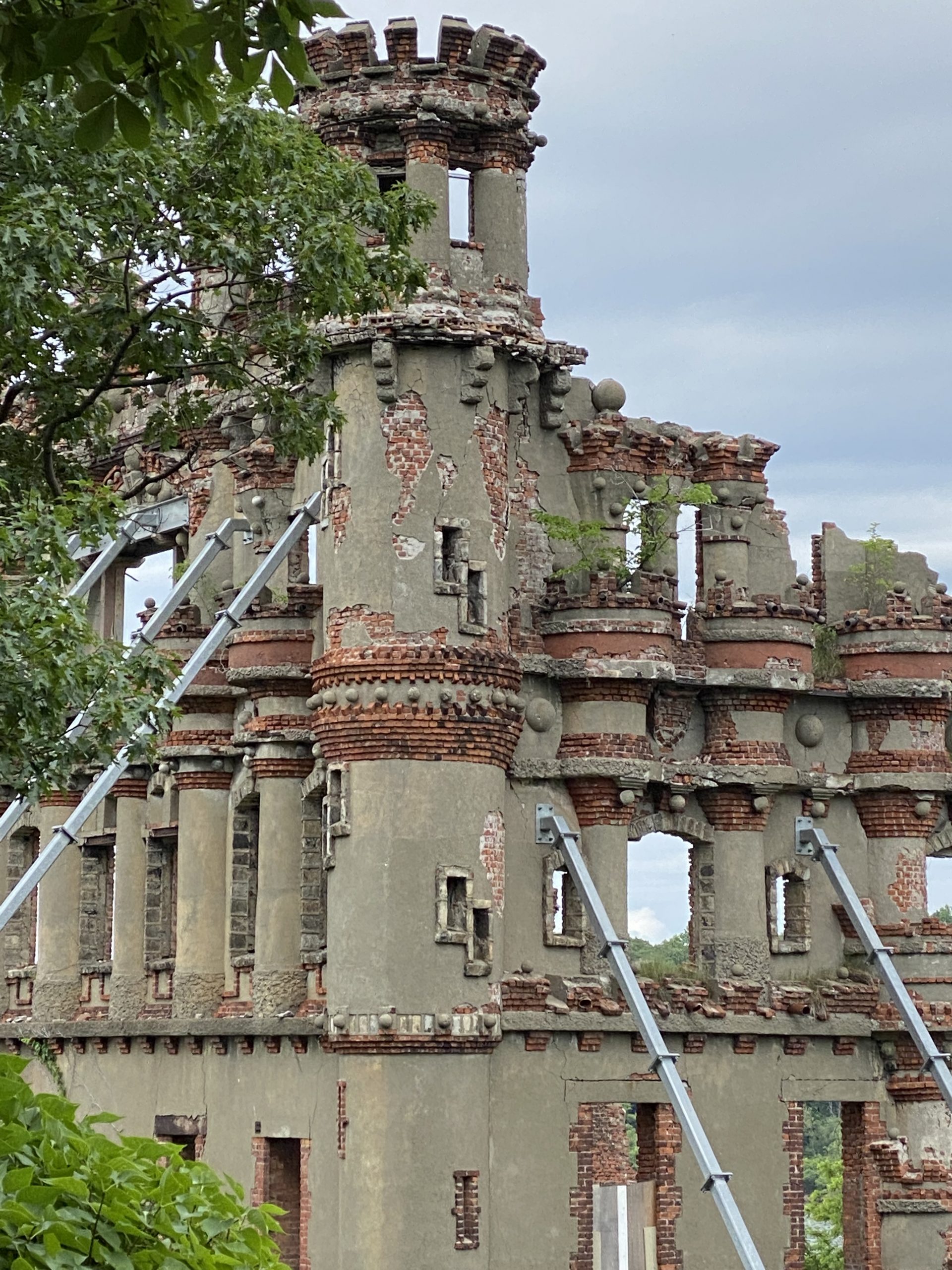 Bannerman Castle is in serious disrepair. 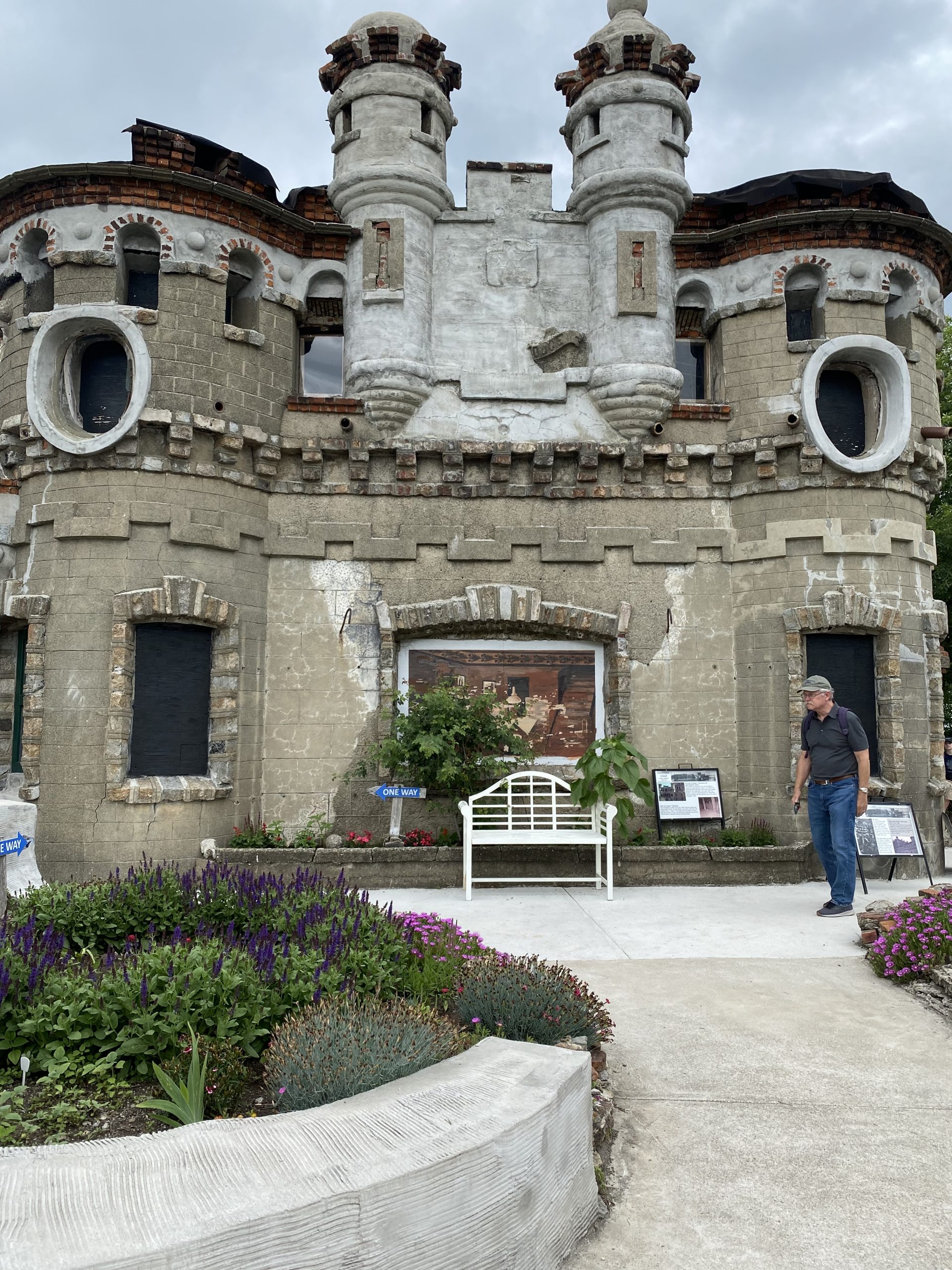 The Bannerman family home on Pollepel, high atop the island. 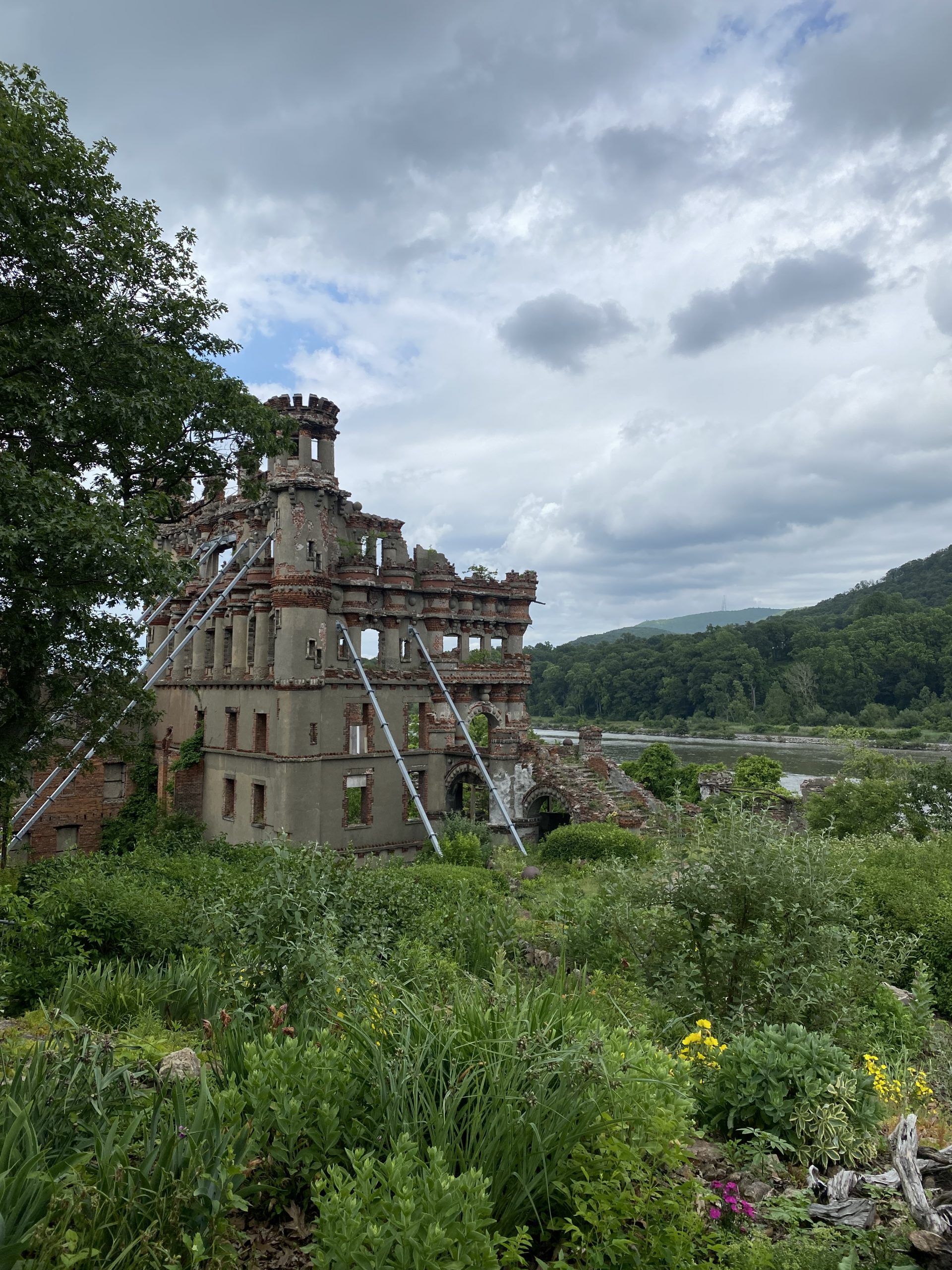