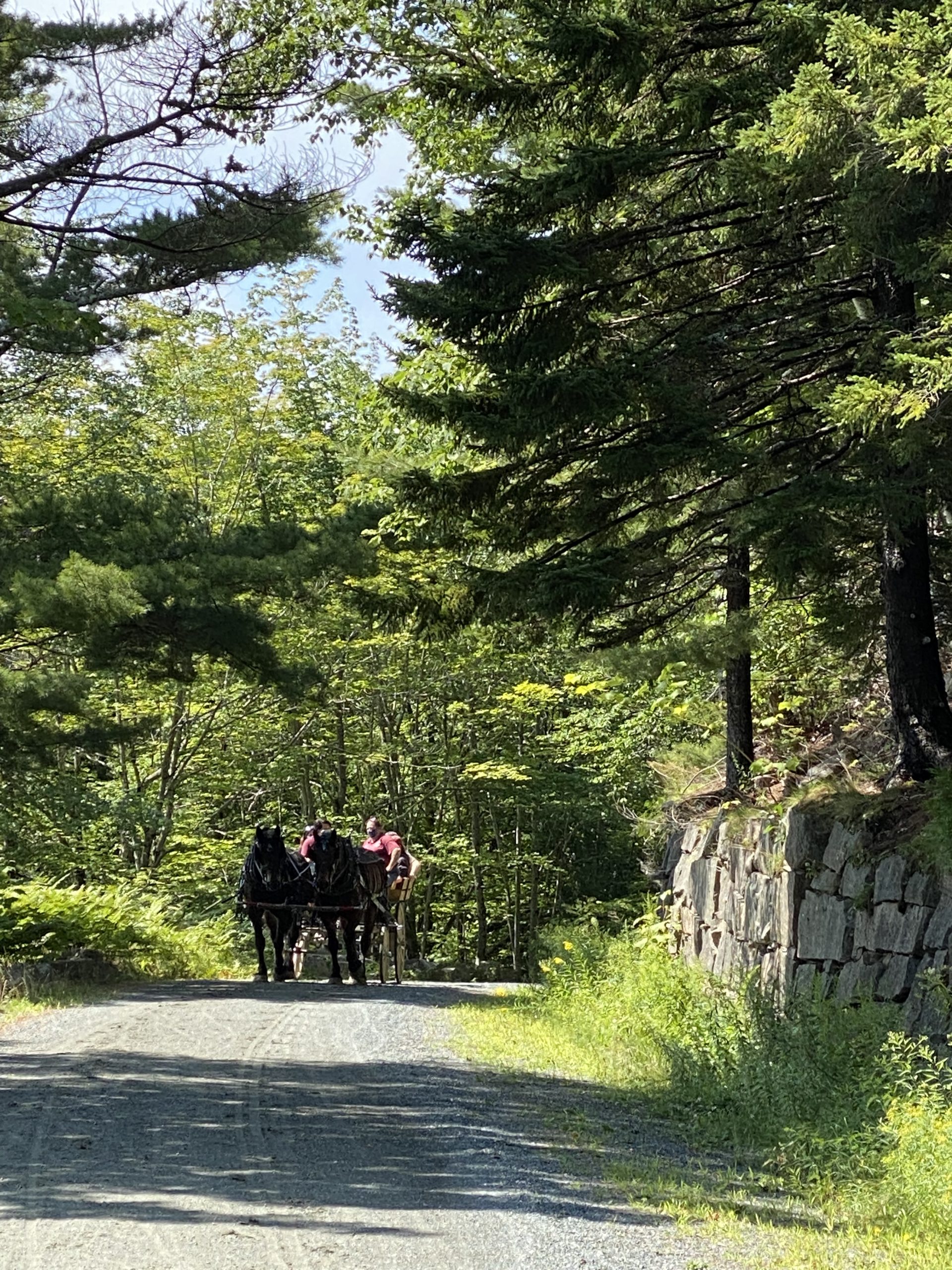 John D. Rockefeller, Jr. began traveling with his family to Mount Desert Island in 1908. He purchased a ninety-nine room “cottage” in Seal Cove, Maine in 1910. He loved the beauty of the area and began buying land to keep it out of the hands of developers. Many of the super wealthy Gilded Age families bought homes and land in the area and were concerned with keeping the area pristine. Also, there were quite a few residents and summer visitors who, though not necessarily rich, wanted to preserve the area. It was designated a national monument in 1916 and President Woodrow Wilson declared the 47,000 acre area Acadia National Park in 1919.

The Ford Model T had been on the road in the United States for two years when Rockefeller bought his summer home on Mount Desert Island (MDI). At the time, Henry Ford, whose family also owned property on Mount Desert Island, was applying principles of mass production to automobile manufacturing. In fact, he originally coined the phrase “assembly line.” From 1900 to 1915, personal car ownership mushroomed from 8,000 to 2 million. Between 1913 and 1927, Henry Ford built an astounding 14 million Model Ts.

Rockefeller recognized that automobiles could easily destroy the serenity of nature in the park. He was a skilled horseman and wanted to be able to ride horses and take carriage rides without having to put up with car traffic. His father had built and landscaped many carriage roads on his estates in Ohio and New York, so “junior” was familiar with road building. He actually loved road building and decided to use some of his vast wealth to build carriage roads on MDI. Starting in 1913 and continuing until 1940, the carriage roads, gate lodges, and stone bridges were designed and constructed into an integrated system that blends in with the natural setting. There are two gate houses and seventeen stone-faced bridges. The system encompasses forty-five miles of carriage roads.

The roads are a great example of broken-stone roads, a type of road commonly built at the turn of the 20th century in America. They are approximately sixteen feet wide and were built so that they could withstand Maine’s wet weather. Rockefeller aligned the roads to follow the contours of the land and to take advantage of the views. He graded them so that they are not too steep and so that the turns are not to sharp for horse-drawn carriages.

The gate lodges serve as “welcomes” to the system. The seventeen bridges were designed uniquely to span streams, roads, or waterfalls. They are all steel-reinforced concrete but they are faced with native stone and were built with local materials by local craftsmen. At the height of the project, Mr. Rockefeller employed around 250 men. Stone was quarried from about sixty quarries in the area. (One of them was just up the road from the house we rented for the week.) Rockefeller was usually on the job site daily when he was on Mount Desert Island. 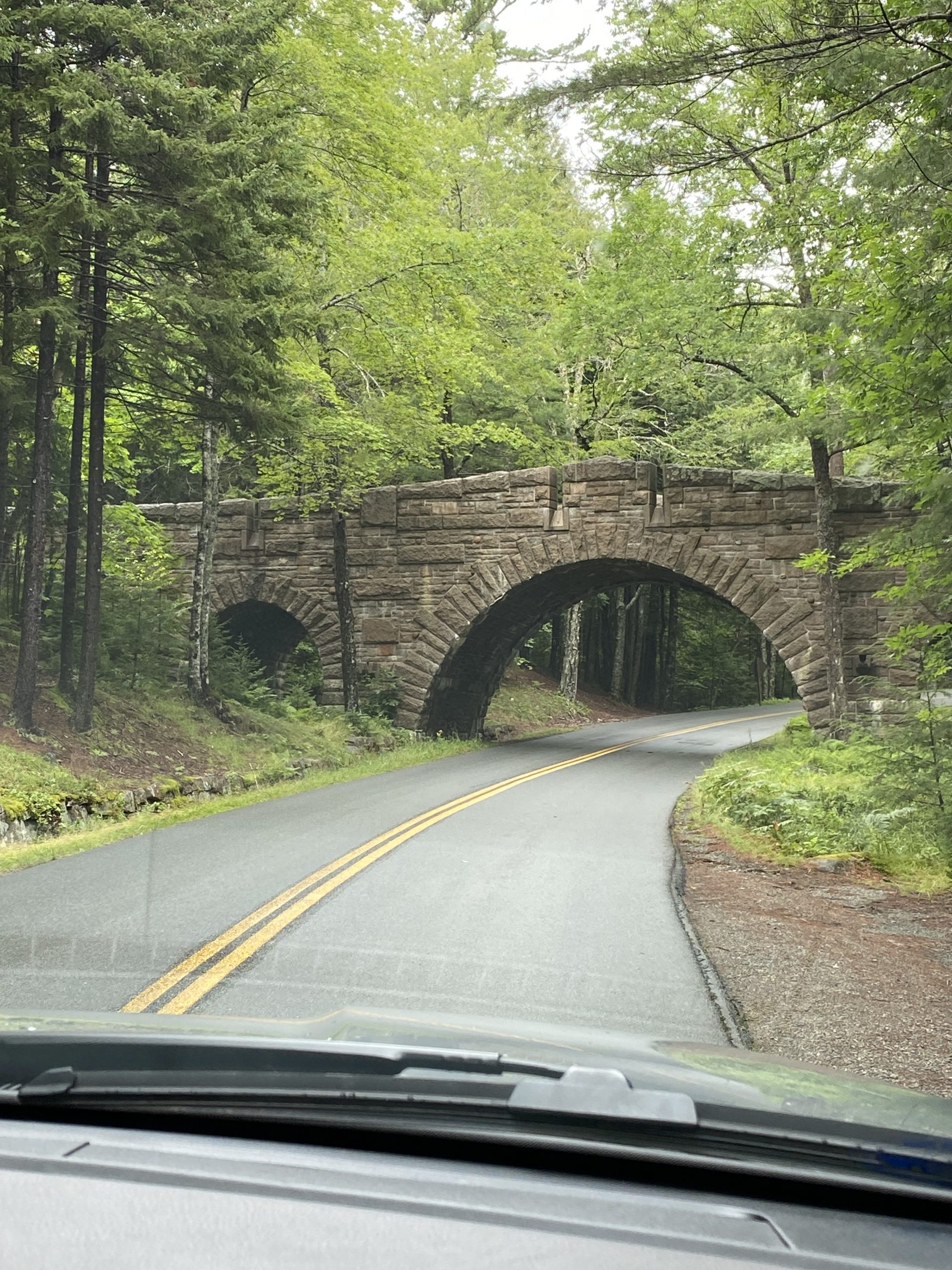 The carriage roads are used for carriage rides, horseback riding, walking, jogging, and bike riding. Electric bikes are not allowed. Visitors to the park are free to ride their own horses or, if you forget to bring yours, you can rent one to ride along the roads. There is a company that operates within Acadia National Park that offers carriage rides, which is what we did. Our trusted steeds, Moses and Mary, transported us along the roads as our carriage driver shared a wealth of information about Mr. Rockefeller’s vision for the park. It’s one thing to read about the project and quite another to see it first hand. The roads, the bridges, the lodge houses, and retaining walls require maintenance and, let’s be honest, the NPS isn’t a model of excellence on that score, but Rockefeller’s work is still standing strong after all these years. Were “junior’s” motives self-serving or altruistic? I can’t say, but it is an amazing legacy that has to be witnessed to be fully appreciated. 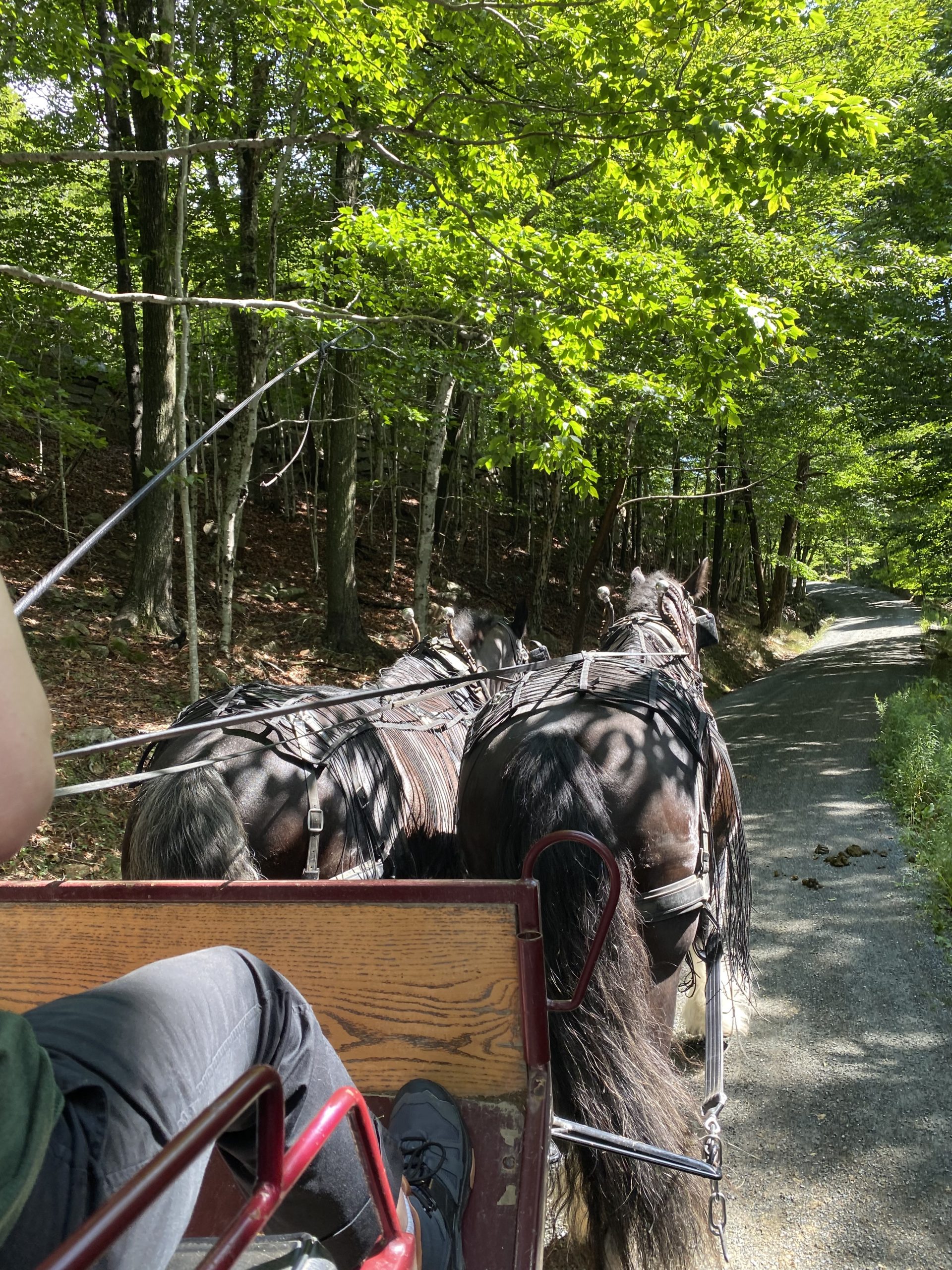 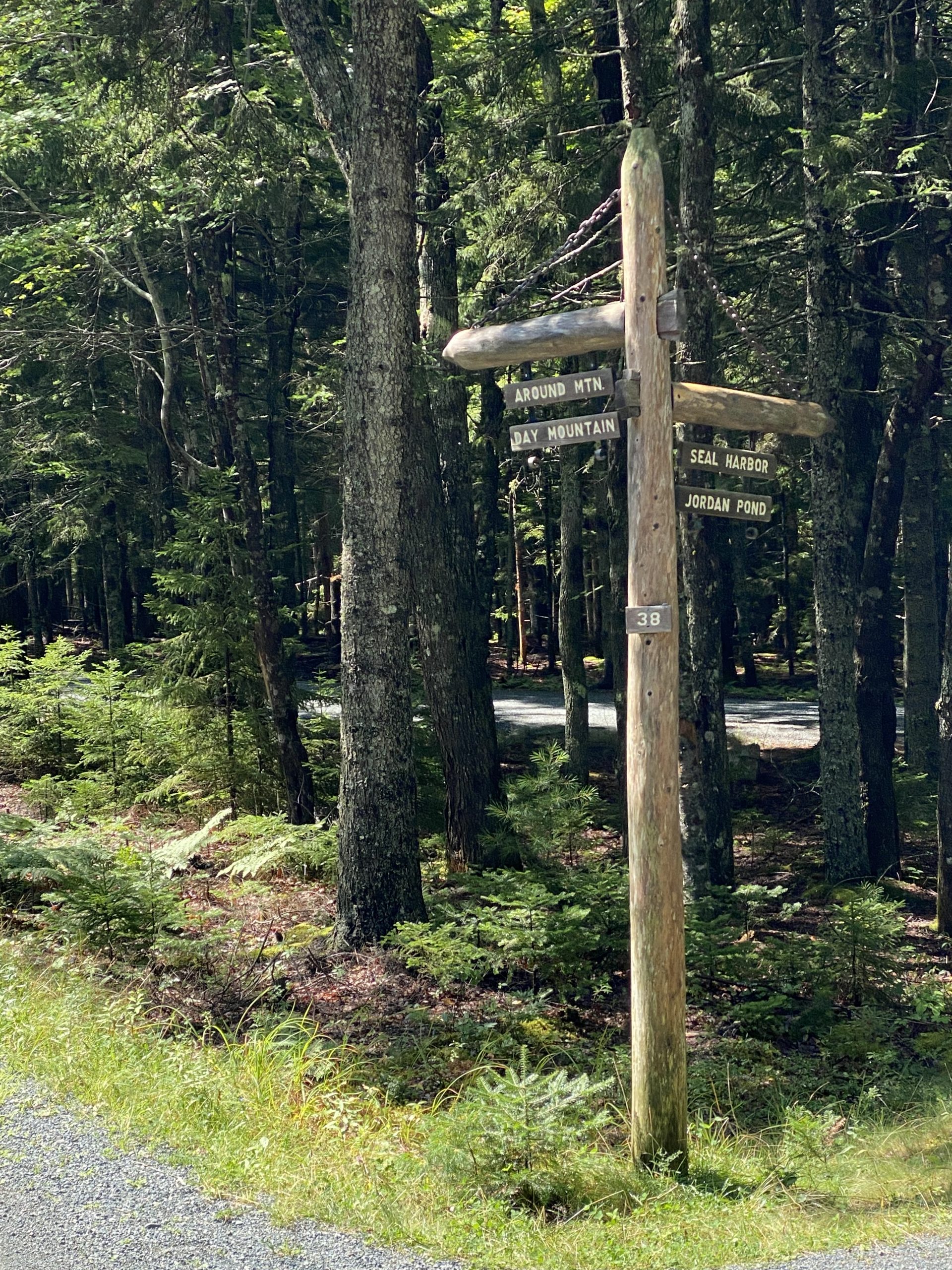 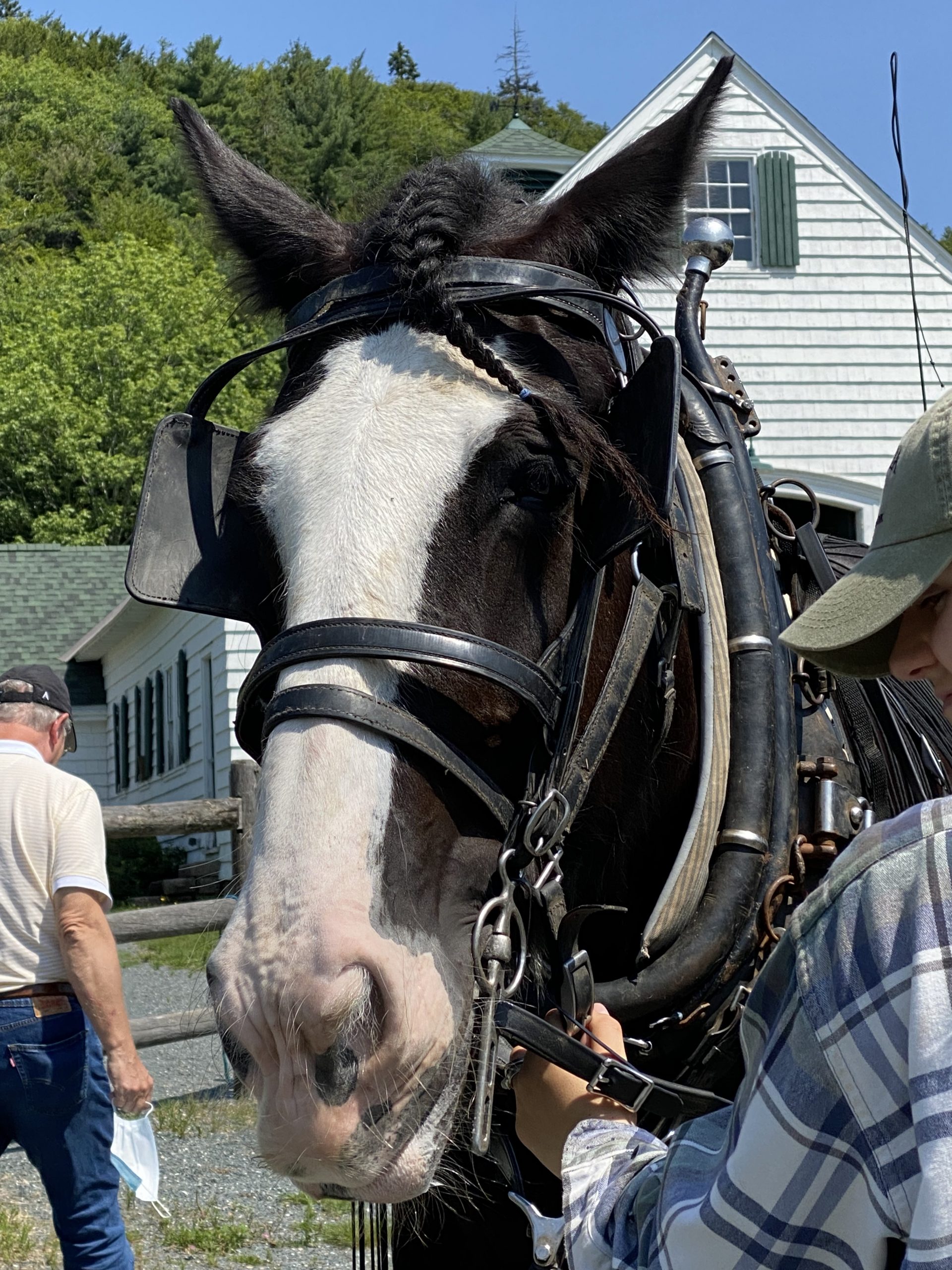 Hey, Mary! Why the long face?