The last time (and only time) I have visited the Outer Banks before this week, I was probably at the ripe old age of seven. Age nine max. It was a family trip with my parents and brothers and we met up with an aunt, an uncle, and a couple of cousins. The house in which we stayed was probably owned by some guy who knew some guy who was related to some guy or had a brother-in-law or good buddy with whom my dad worked. You know, VRBO way back in the olden days. Air BnB back when it was a mere embryo. My family traveled all up and down the Eastern Seaboard that way every summer. We never knew what awaited us on the other side of the door when my dad turned the key. Other than the house in the Outer Banks, the most indelible memory I have involves a house somewhere way down in Florida; I believe it was on the gulf side. Seems like we drove for days in that Pontiac sedan with no seat belts and no AC, of course, but windows down, hair blowing and second-hand smoke swirling in the wind. A state of lawlessness existed in the backseat. It was a simmering cauldron of sibling rivalry; the territory was divided by imaginary walls and patrolled diligently. Dad didn’t tolerate a lot of bickering, so you had to put up with a plethora of transgressions. You know, little kicks or punches, or worse, a hand or foot inching over to your side of the car. Infractions were not really adjudicated; instead the guilty party usually resorted to bullying or blackmail to quiet the aggrieved. Most of they time, the end result was an uneasy truce. When you just couldn’t take annoying brothers anymore and you whined, “He won’t stop staring at me!” the response was something like, “Don’t make me turn this car around!” Or worse, “If I have to pull over, I’ll give you something to cry about!” Anyway, we finally got to the Florida house around midnight. It was a pretty nice house. I can still picture the whole set of matching juice glasses with little oranges on them. I was impressed and thought it was a high class place, but the towels smelled yukky from the dryer. We were used to those scratchy, line-dried, fresh-smelling towels. Plus, we had to run a gauntlet of mosquitoes the size of hummingbirds to get to the beach. My little brother got a mosquito bite on his wee-wee, of all places. He kept scratching it in public, much to the embarrassment of the whole family. Oh, the joys of being a Baby Boomer!

Anyway, back to the Outer Banks. Located in Nags Head, the house of yesteryear was big and gray and I was told (by my brothers, I guess) that it was haunted. I was on edge, at least after dark, the whole time we were there. You just never know when a ghost will mess with you, but  I’m pretty sure it usually happens when you are asleep or in the bathroom. I went home sleepy and dirty. One can never be too careful in a situation like that.  So this time, I brought my one-man security detail and we stayed in a hotel. I was well rested and squeaky clean the whole time. We drove over from Raleigh after the Lord Huron concert thinking that, since we were this close to the Outer Banks, we may as well pop in if no hurricane is on the horizon.

The first thing on our agenda was a stop at the Wright Brothers National Memorial at Kill Devil Hills. You may wonder how it got that name. So did I, so I made a few discreet inquiries. Not really, but it sounds impressive to say that. In reality, I asked Google or some other know-it-all source.  As is often the case, booze was involved, according to most sources. Seems the rum being consumed by a bunch of pirates was so bad that it could “kill the devil.” Or maybe some booze washed ashore after a shipwreck. Speaking of shipwrecks, there have been some five hundred shipwrecks along the shores of the Outer Banks. We are glad we came by car and left the boat safely docked at home. While we are on the subject of names, you are probably wondering where Nags Head got it’s name, too. It’s not a pretty picture, so suffice it to say that an old horse got her head stuck in a fence and it was still stuck there long after it should have been removed. I won’t even repeat the alleged story behind the name Kitty Hawk; it just has to be hogwash. 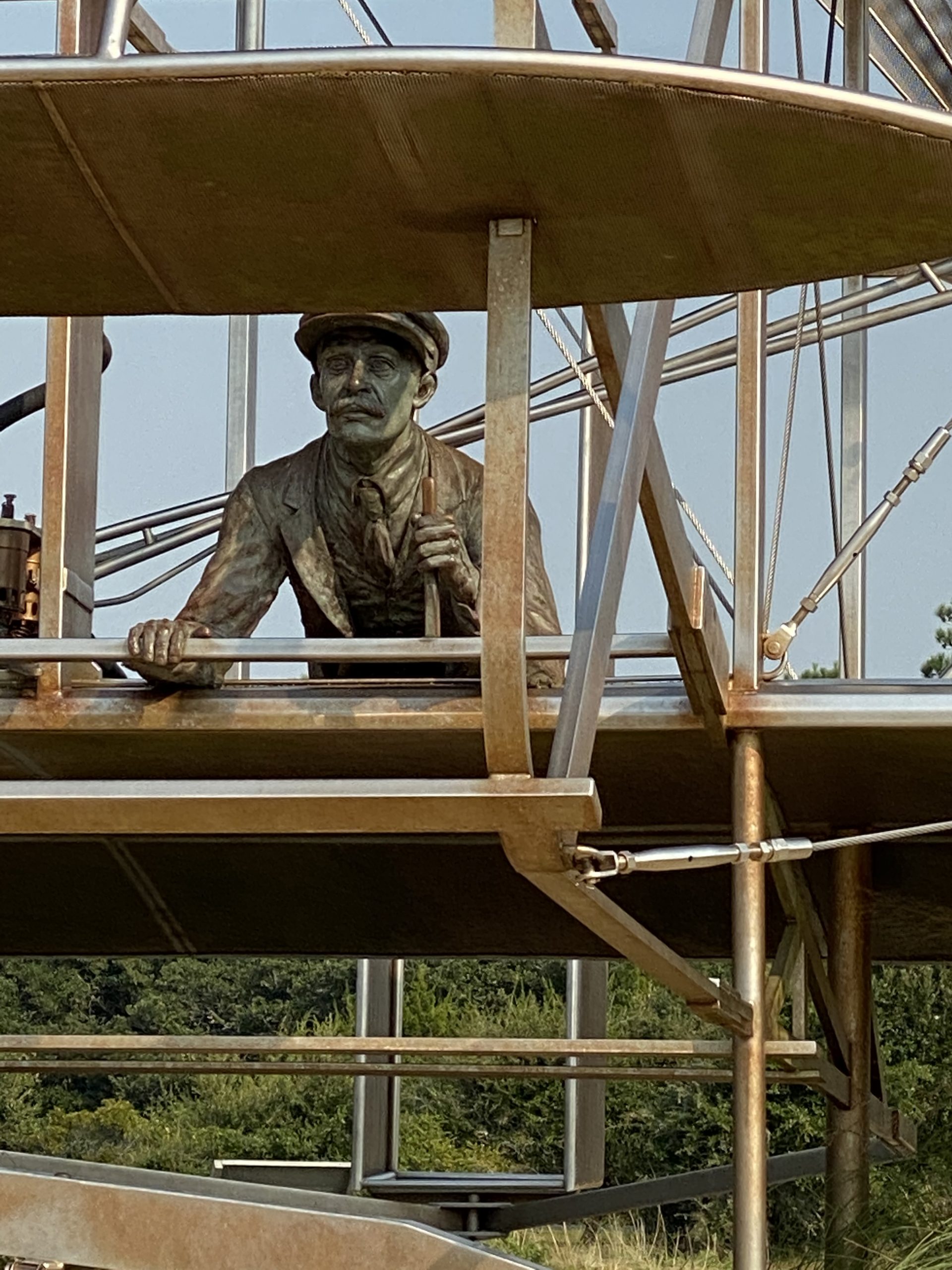 Part of a fabulous sculpture of the first flight.

The Wright Memorial was quite impressive. It exceeded our expectations so much that we even went back the next day. (Our National Park Service Senior passes get alot of use.) On the second day, we caught a ranger talk. Those are always good. The ranger emphasized the challenges the brothers encountered. Just getting to the Outer Banks from Dayton, Ohio was difficult. They had to take two trains and two ferries. I think, for a lot of school kids, the story of the Wright brothers was abbreviated a bit. Well, actually a lot. Basically, what I remember is that they came here one day and flew their airplane. I don’t remember being told of their dogged persistence and many failed attempts to fly over the course of several years. Their inherent determination was a result of their mother’s insistence that they figure out how things around them worked. When they were kids, they went to her for help with anything mechanical. Their father was a minister so he was probably not all that mechanically inclined, but their mom sure was. My schooling emphasized the end result of the brothers’ work, and that shortchanged me and the brothers Wright. To quote a display at the park, “After more than four years of hard work and experimentation, it only took the Wright brothers 12 seconds to change the world. On December 17, 1903, at 10:35 a.m., Orville Wright made the world’s first controlled, powered, heavier-than-air flight.” Not exactly an overnight success, but they kept at it until they made their dream a reality. They were often frustrated and demoralized. Wilbur said, “I confess that in 1901 I said to my brother Orville that men would not fly for 50 years.” Also interesting to me was how the locals were excited to help the brothers. They would run a flag up the pole at their hangar and locals would come to assist in any way they could. The idea of human flight intrigued people from all walks of life. 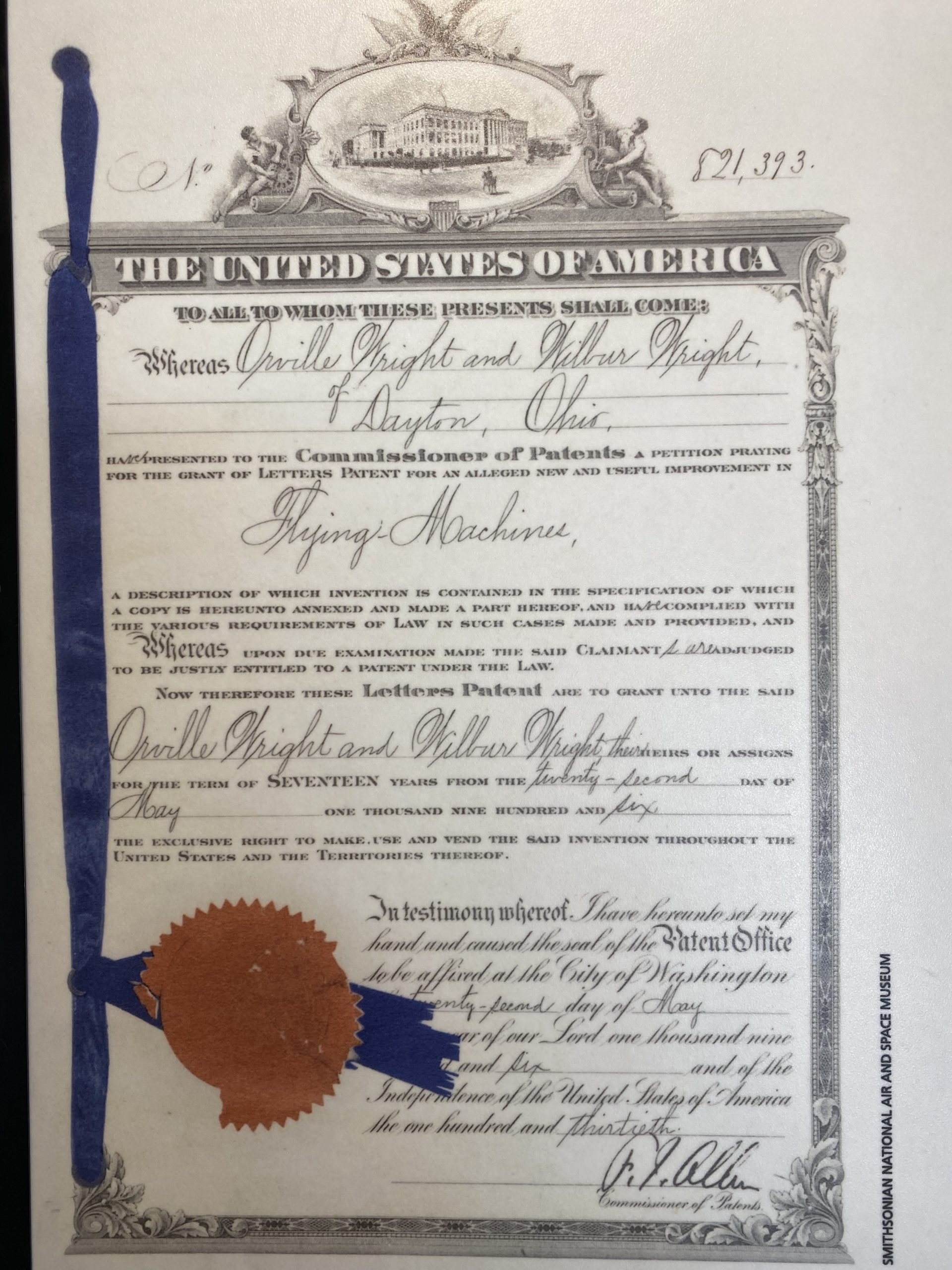 We read about Jockey’s Ridge State Park and had to see it for ourselves. The sand dune is the largest sand dune system in the eastern United States. The dune shifts, obviously, and its height varies between 80-100 feet. It was like being in the Sahara only when we climbed up high, we could see both the Atlantic Ocean and the Roanoke Sound. Don’t look for large bodies of water when you run around in the Sahara. Also, the sand of the Sahara is reddish, but here at Jockey’s Ridge, it just looks like regular old beach sand. The pictures don’t really do the place justice. Maybe you should plan a trip. 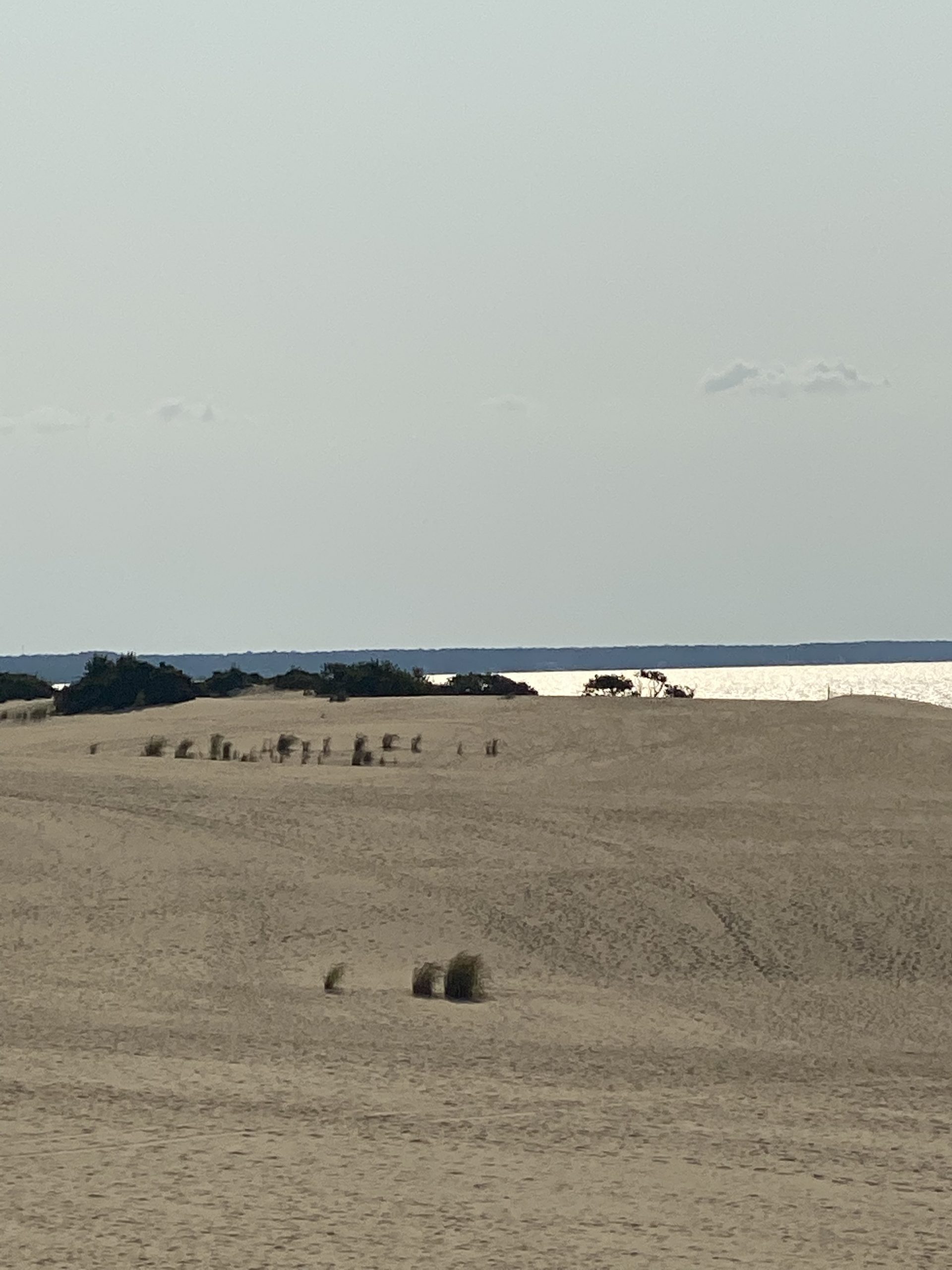 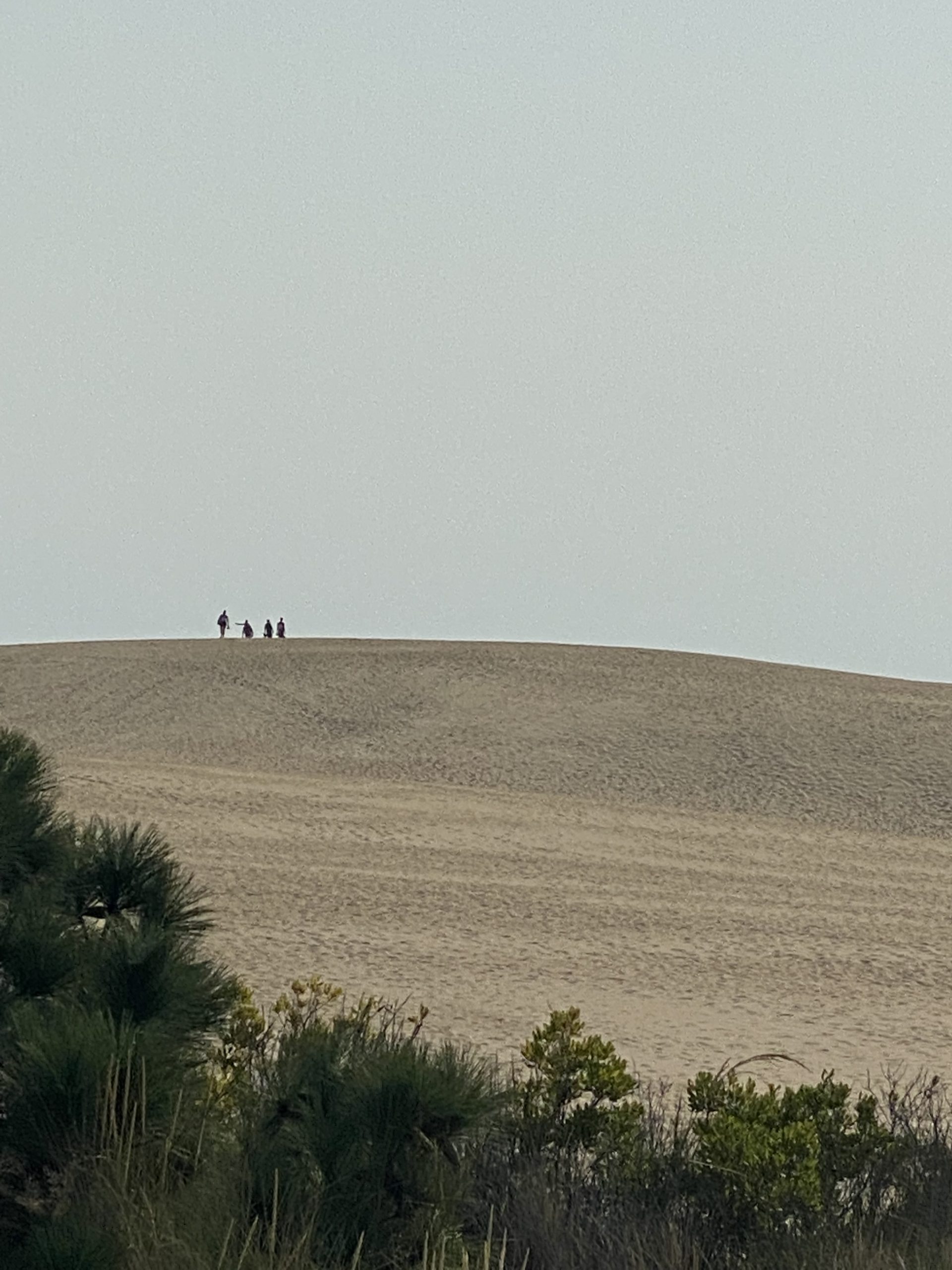 Today we head the car to Wilmington for one night, then we will go south. It has been an amazing couple of days. I am not dissing the rest of the world, but I must say that this is one heck of a wonderful place we call home. We have been on every continent except Antarctica, and I think that our corner of the earth is mighty fine, so if you don’t have the time or money to go to another continent, you will do well to see this one. Get in your car and start driving. There is so much to see within just a few hours of wherever you live.