“If I were to pray, I would pray that the bridges be spared the attention of engineers and arsonists—equal dangers with very little difference.”

Milton Graton was a master covered bridge builder. He devoted his life to them and was considered the world’s foremost expert on the construction of covered bridges. He built his last one in 1990 at the age of 82, but over his lifetime, he built or repaired over three dozen. He hated it when engineers wanted to use iron bolts and modern engineering techniques. He maintained that, if properly cared for, a covered wooden bridge could last hundreds of years, even outlasting structures built of concrete and steel. His work drew attention to the condition of the bridges and led to efforts to rehabilitate many of the ones that were in disrepair. An authentic covered bridge is built from timber and has a truss or arch that supports the roadway. It is covered with wood to protect the wood and prolong the life of the structure.

Covered bridges are a great place to smooch with your sweetie if you don’t believe in PDAs (Public Displays of Affection), which is how they acquired the nickname of “kissing bridges.” They are going the way of the Do-Do Bird, which makes finding them these days even more fun. New Hampshire and Vermont have no shortage and we went looking for them as we drove around those two states. We were not alone. Every time we stopped at a covered bridge, there was at least one other person (often more) snapping pictures like crazy, often with a tripod and a plethora of photographic equipment. At one time, the Granite State could boast of having about four hundred; it still has around fifty four. Vermont, on the other hand, has over one hundred, giving that state the bragging rights for having the most covered bridges per square mile in the country. That state once had more than five hundred. Our efforts to find as many as possible were amply rewarded. I will share some pictures. 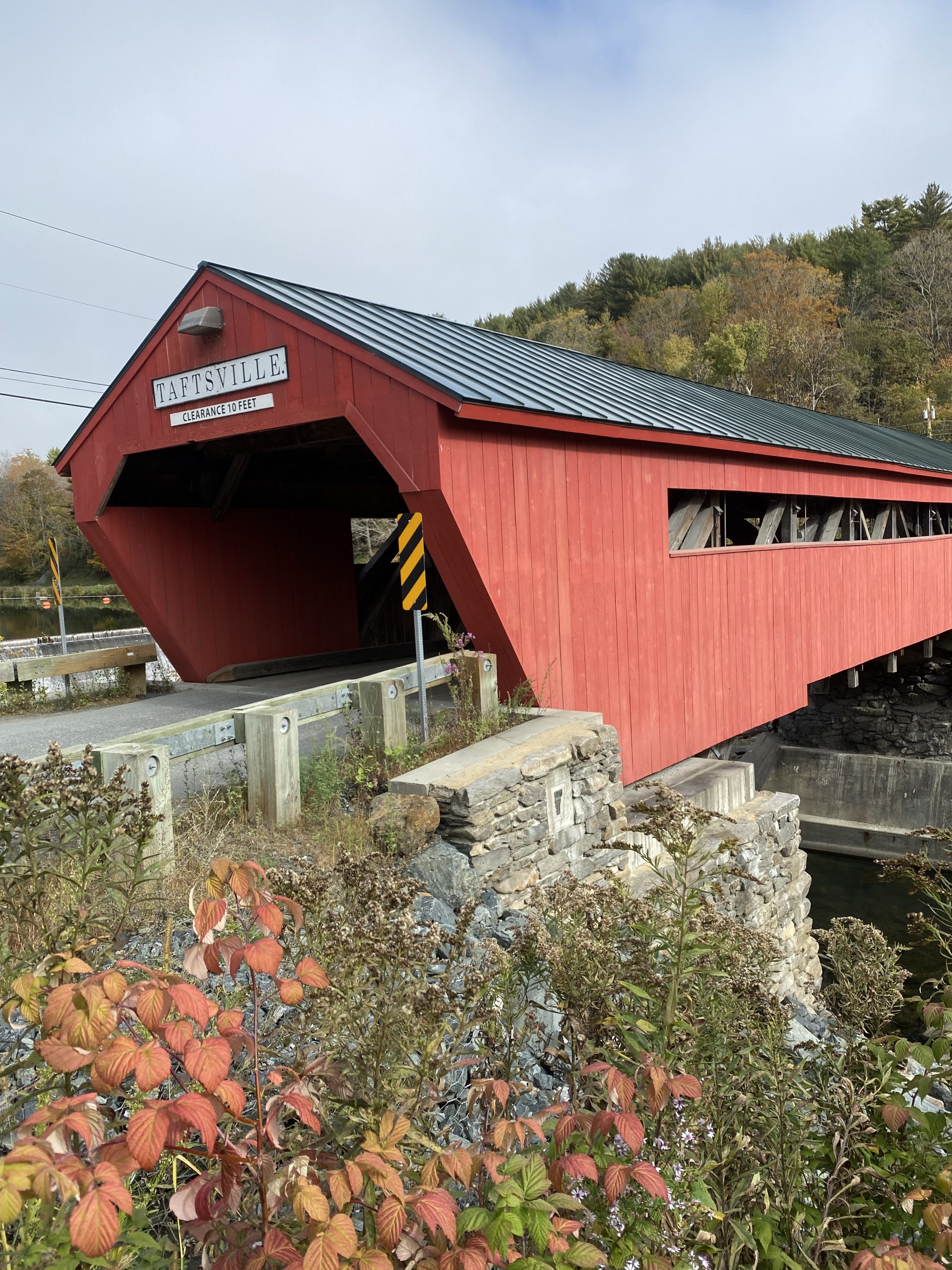 The Taftsville Bridge (above and below): One of Vermont’s oldest covered bridges, it was originally built in 1836. 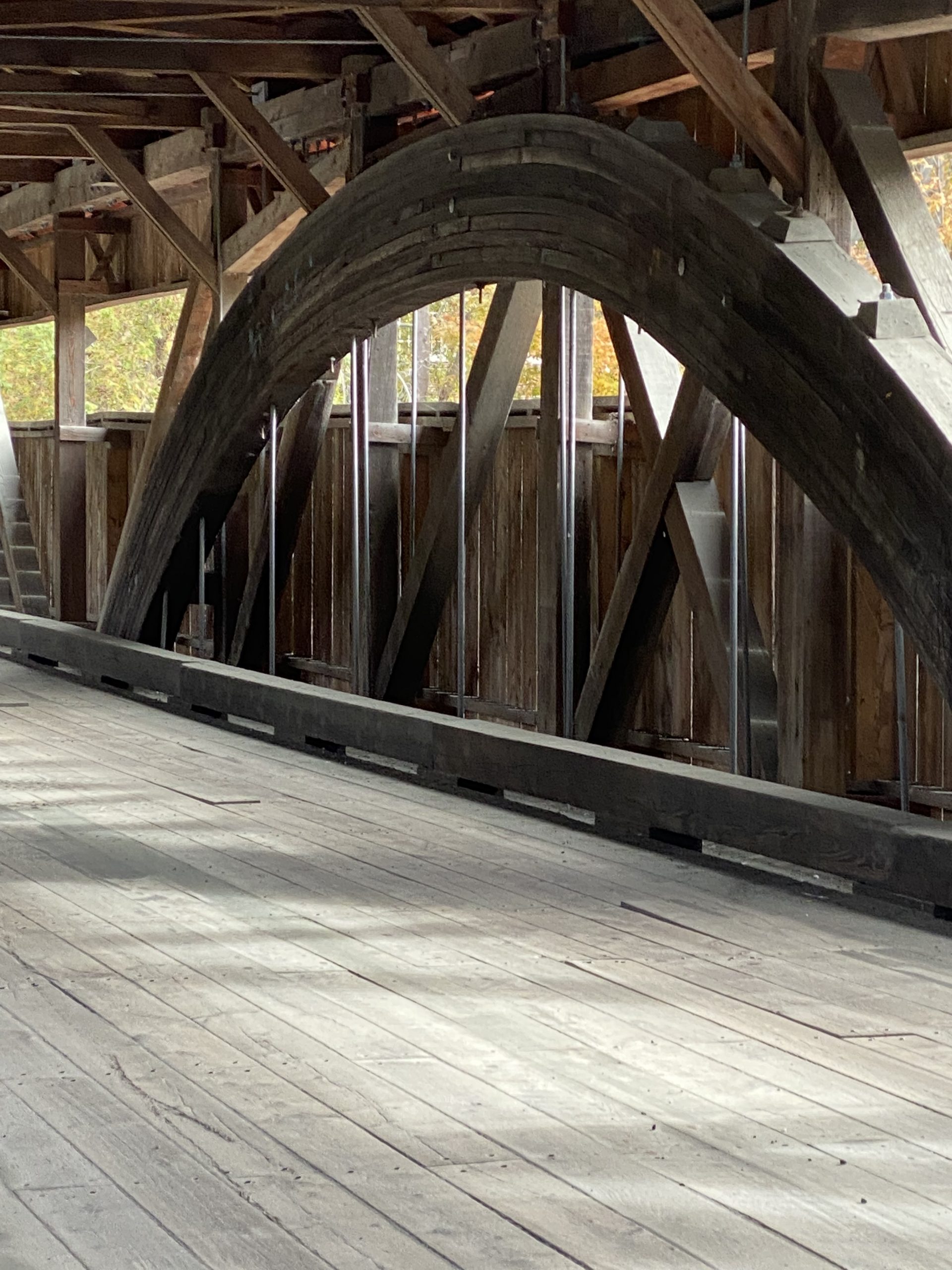 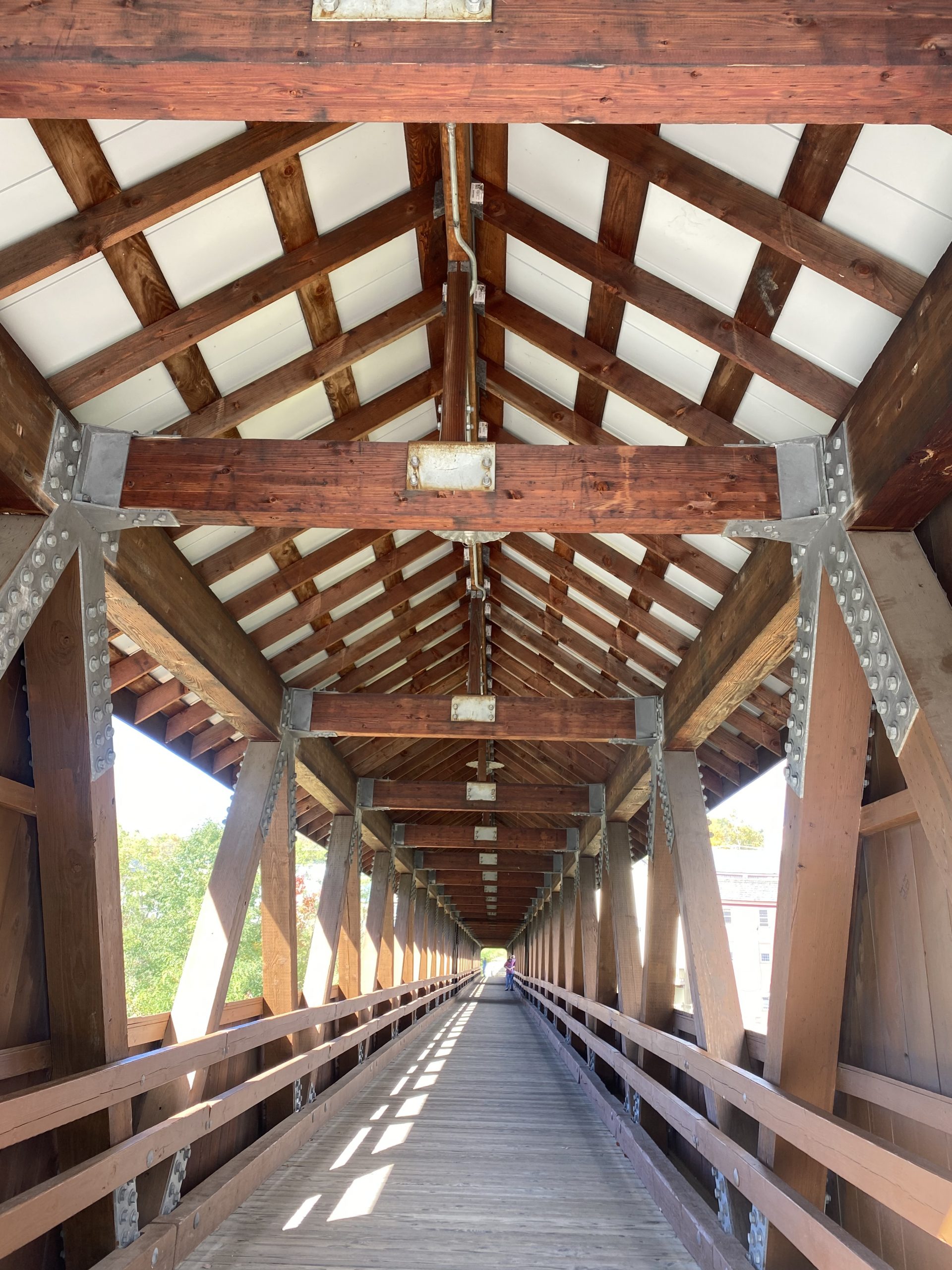 The Riverwalk Bridge in Littleton, New Hampshire (above): The longest footbridge in New Hampshire, it spans the Ammonoosac River (see below) and is open for pedestrian traffic. 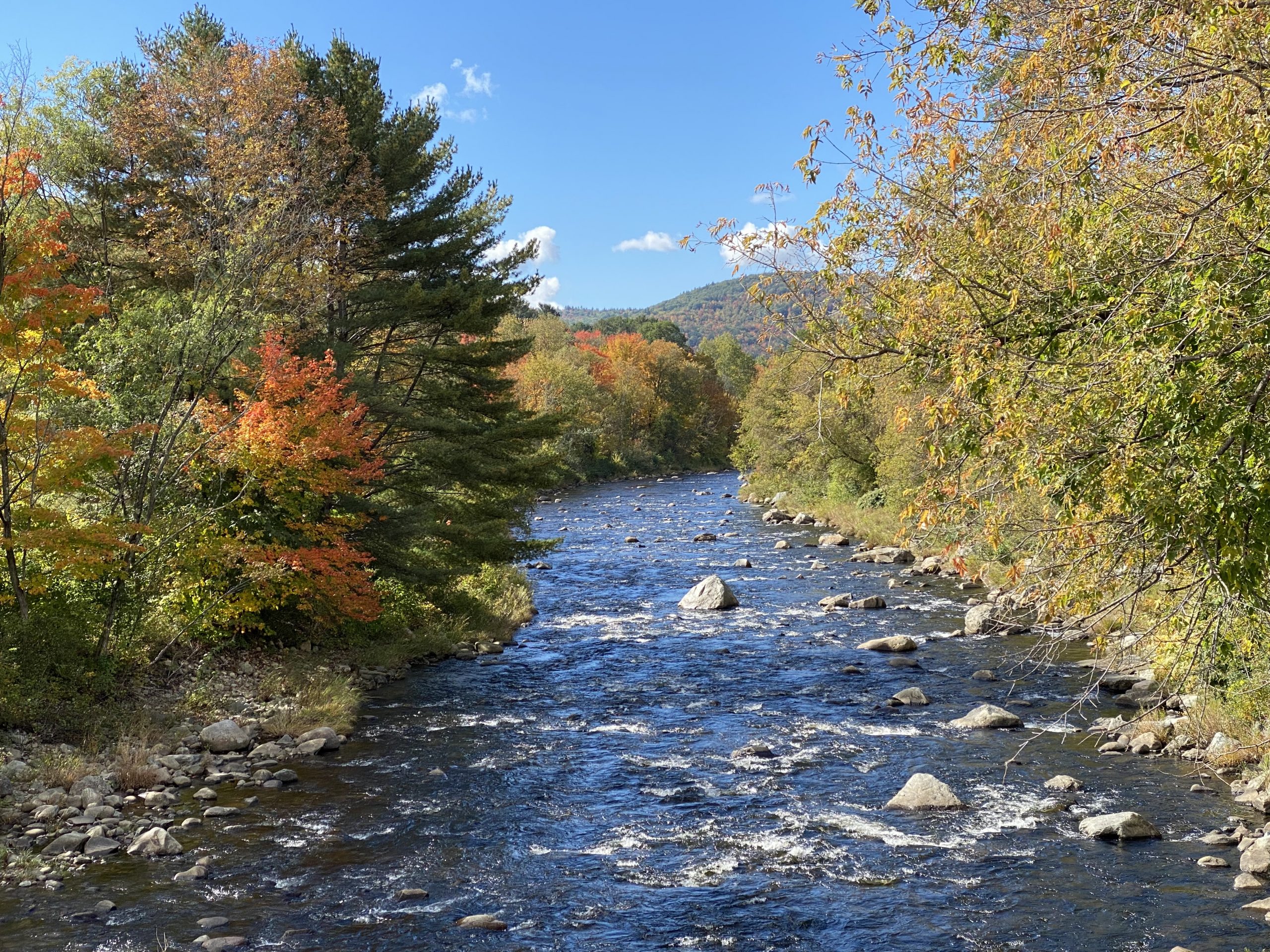 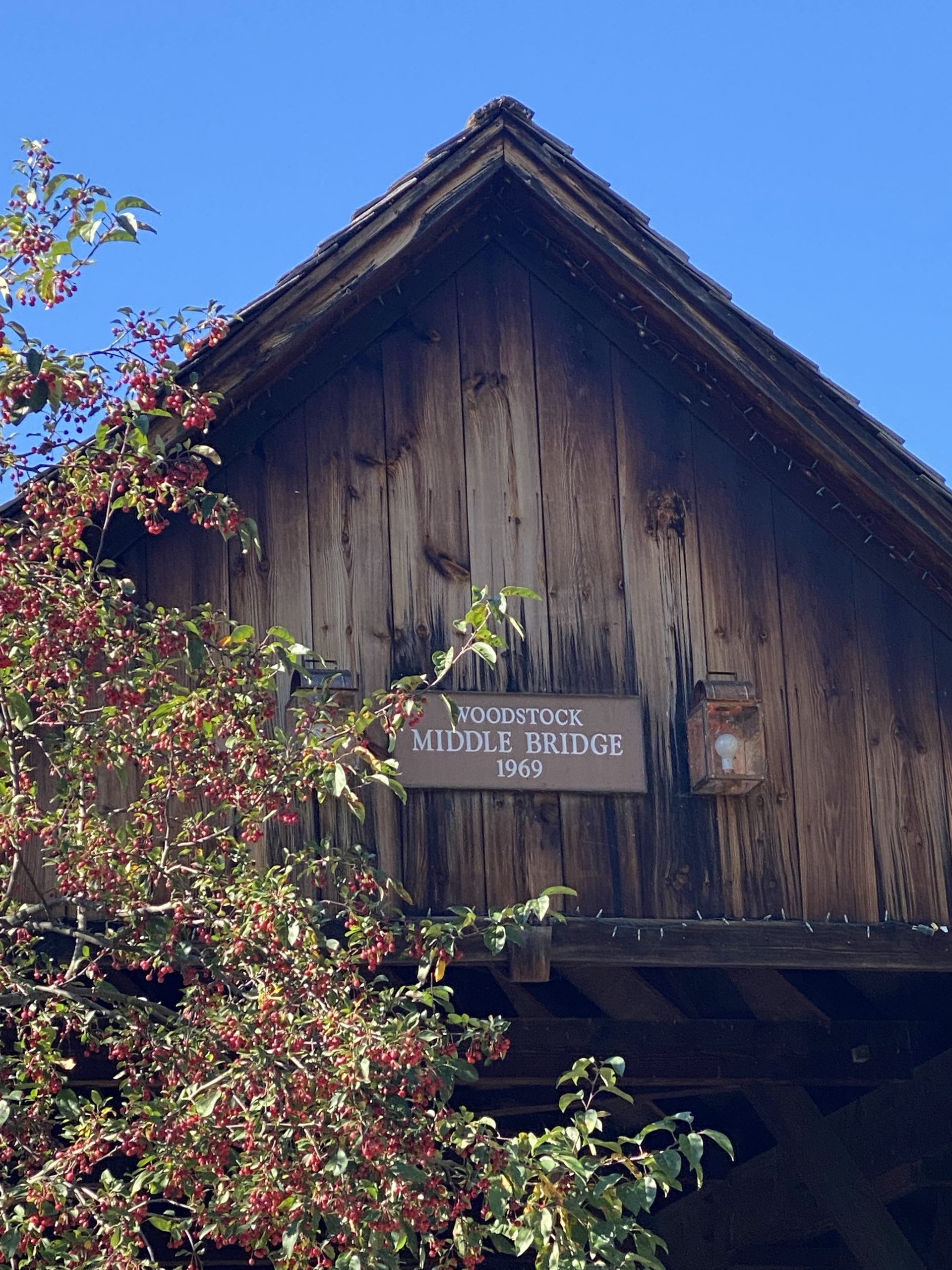 Woodstock, VT: Middle Bridge—I love the play of light on the roadway (see below). 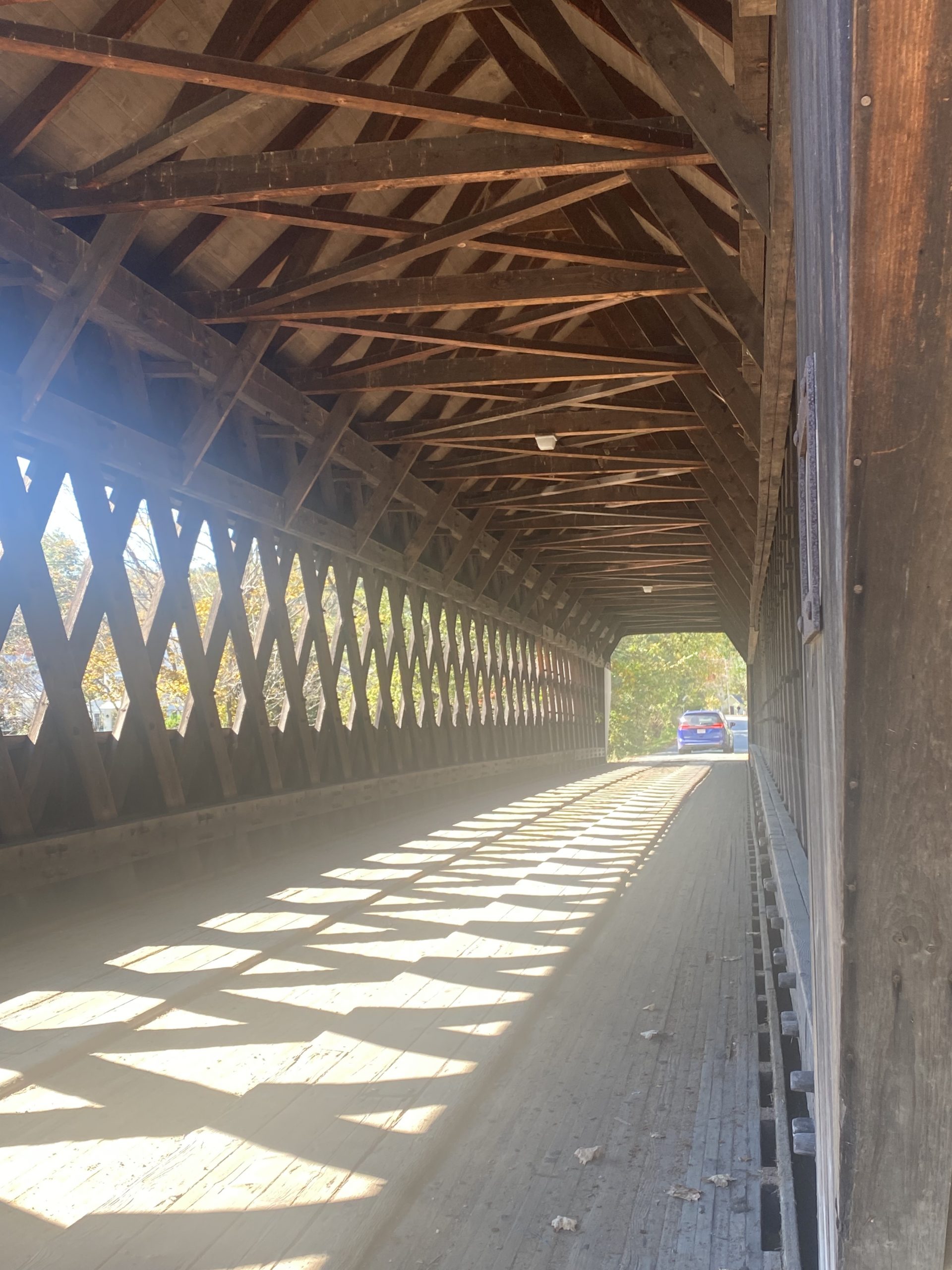 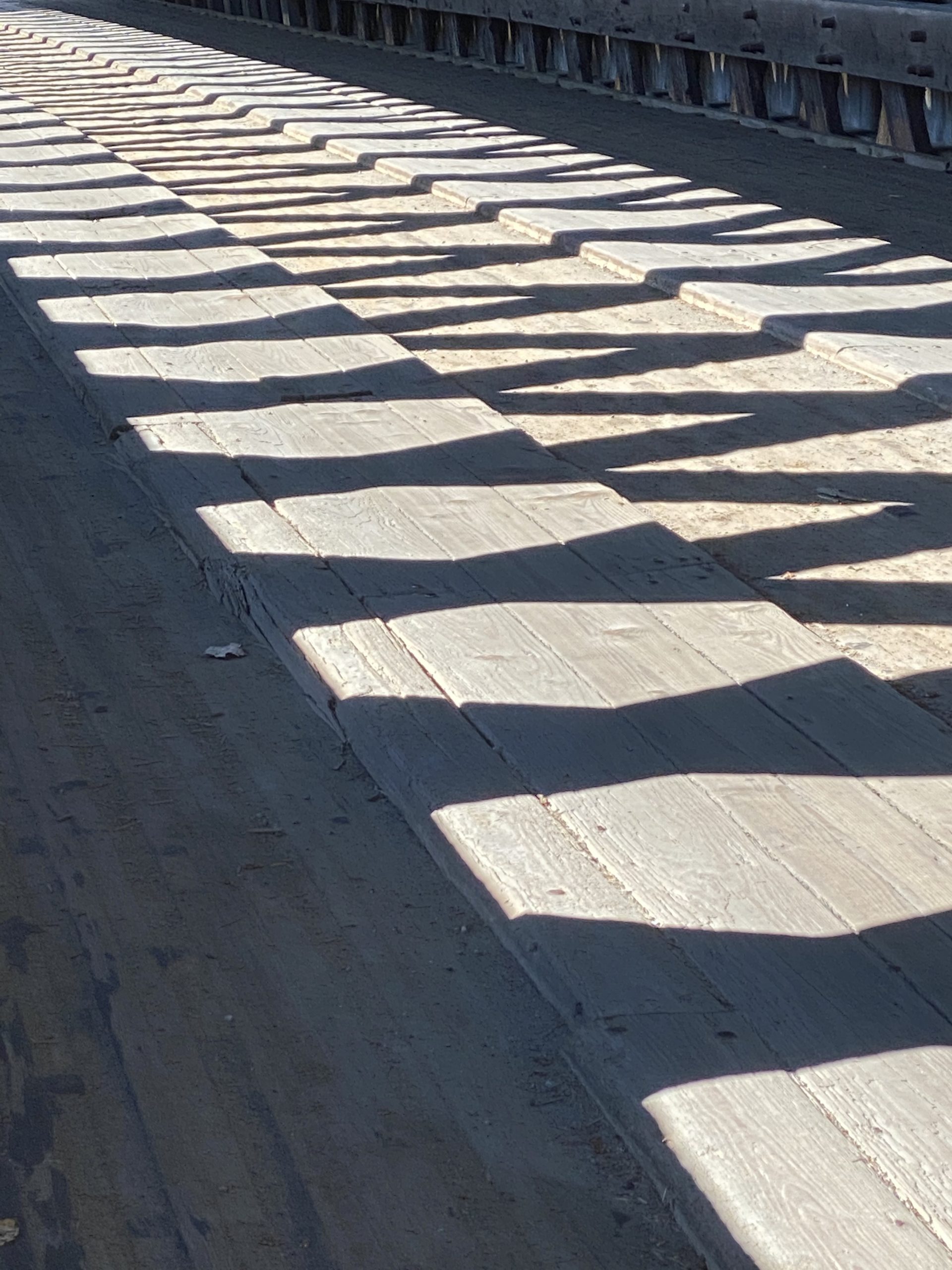 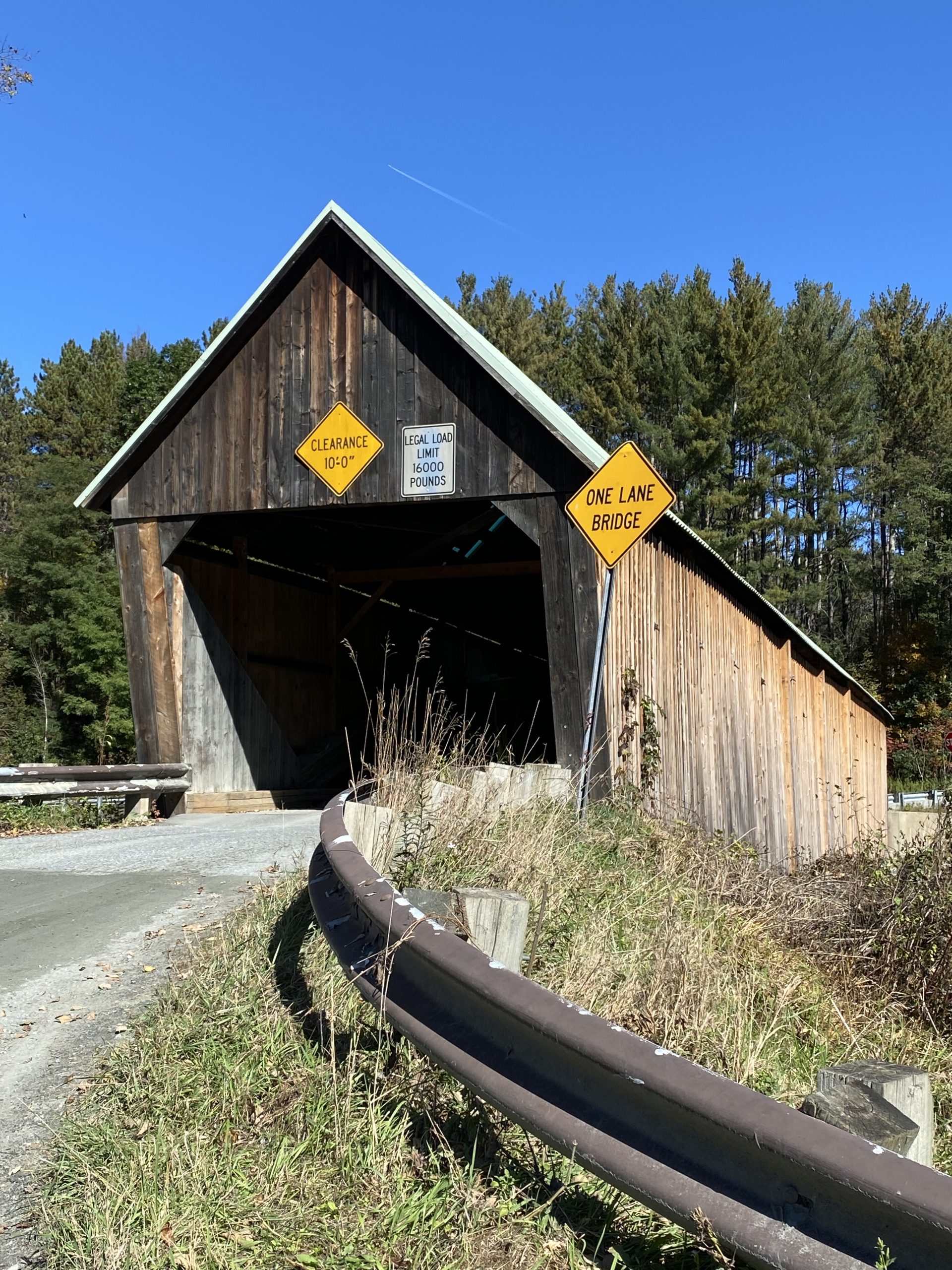 Vermont’s Lincoln Bridge. Dates from 1877. This bridge has a metal roof. It is open to vehicles. 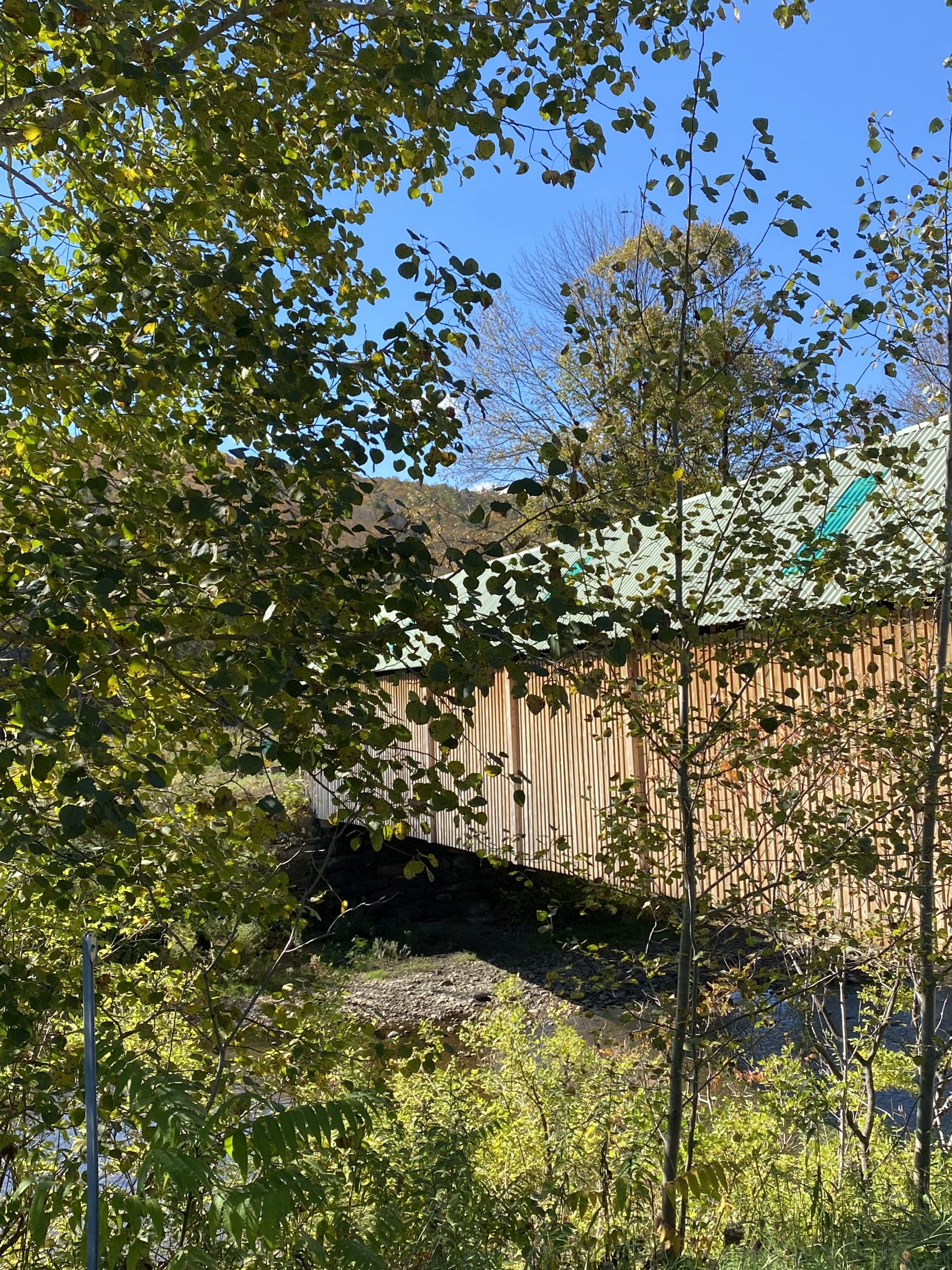 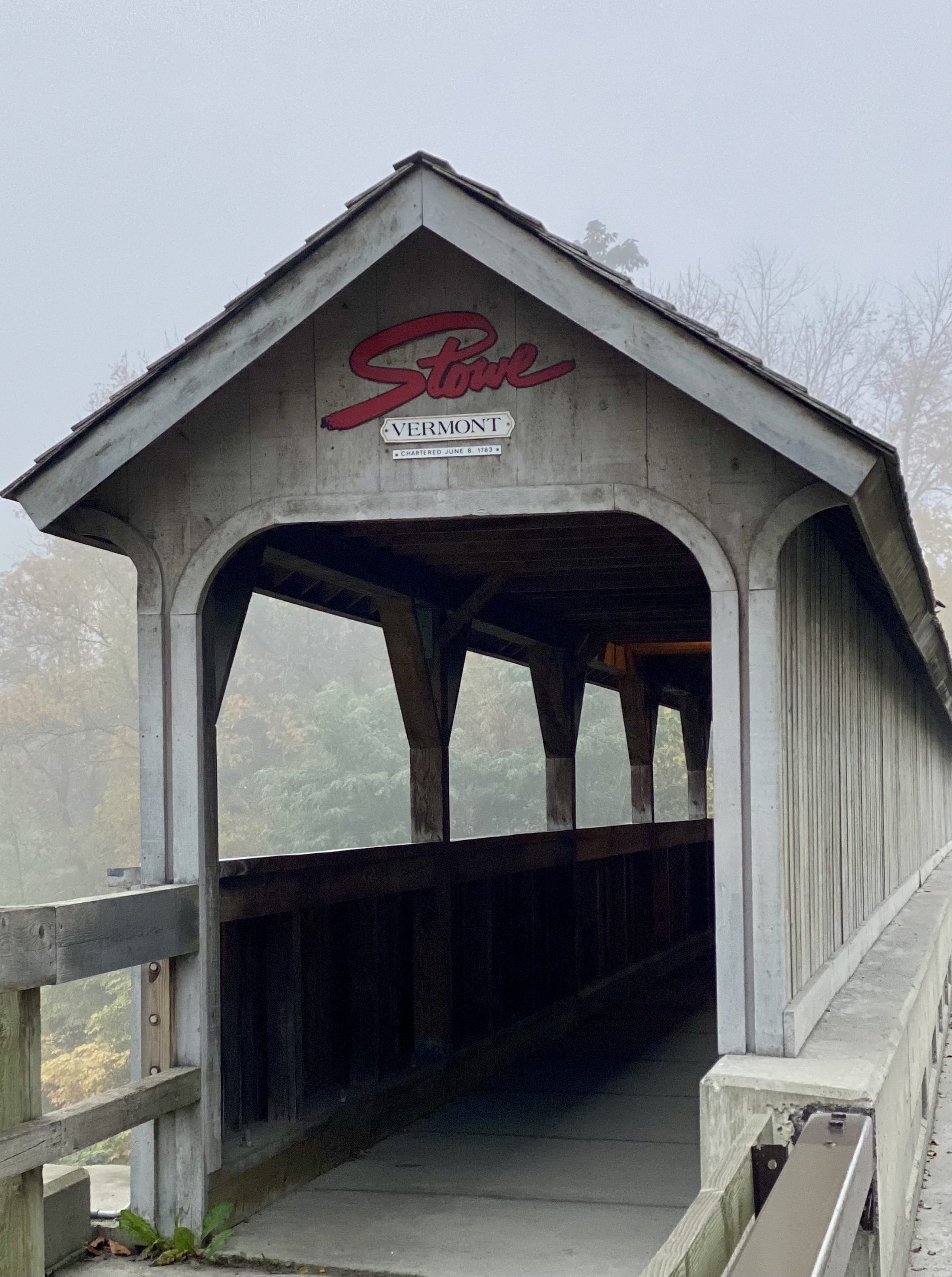 This pedestrian walkway spans the Waterbury River in Stowe, VT. This is an example of a romantic structure, and it was indeed romantic (as well as eerie) in the early morning fog.