“A Child of the Sun”

In 1938, Florida Southern College was a handful of elegant brick buildings perched on a hillside overlooking Lake Hollingsworth. But, amidst the orange groves and magnolia trees, College President Dr. Ludd Spivey envisioned something far grander. He saw the setting for the first truly “American” college, a campus that did not mimic the ivy-laden halls of European colleges, but rather embraced and celebrated the budding, uniquely American aesthetic. It was a dream that only the greatest architect of the time, Frank Lloyd Wright, could accomplish. 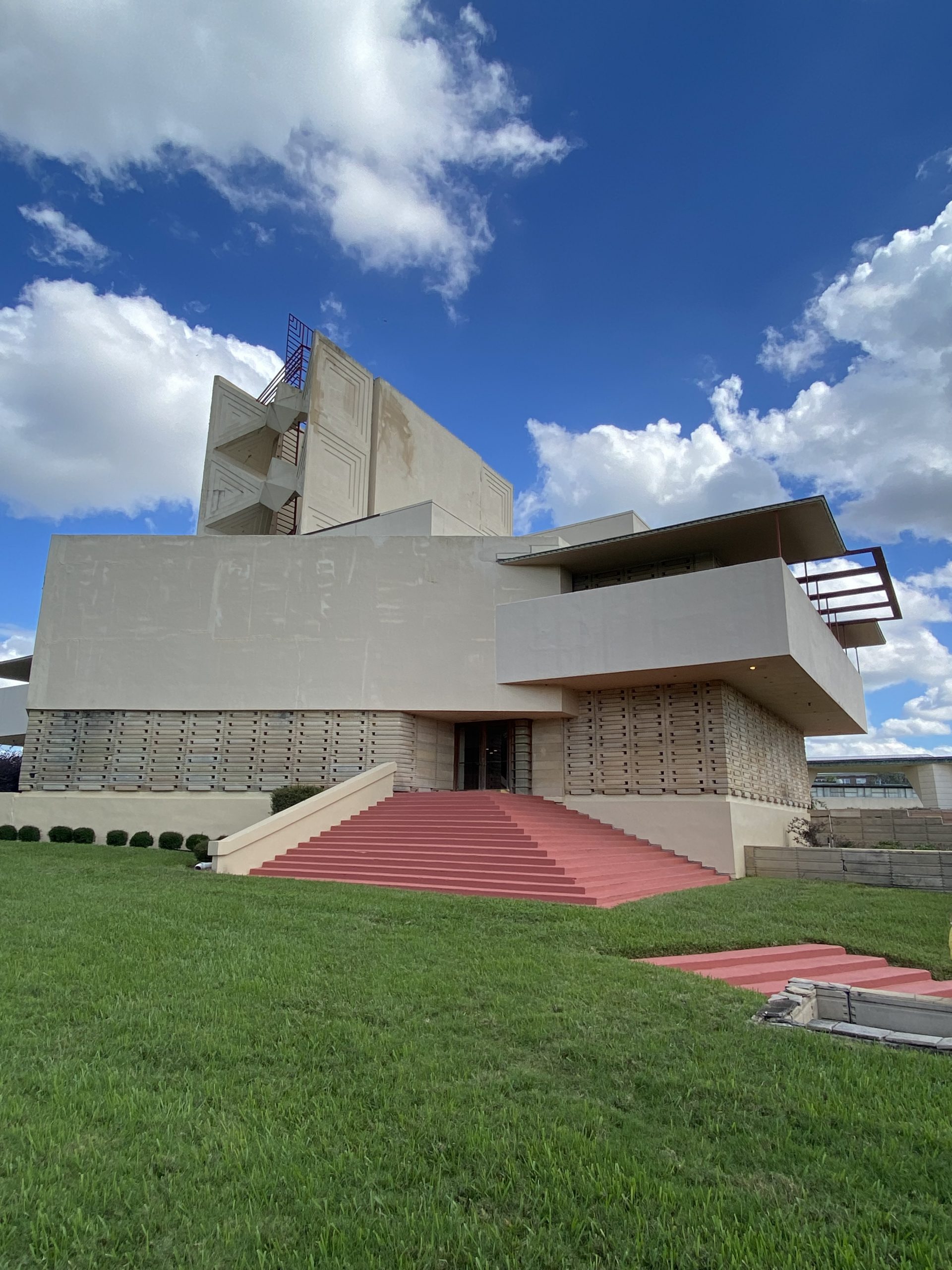 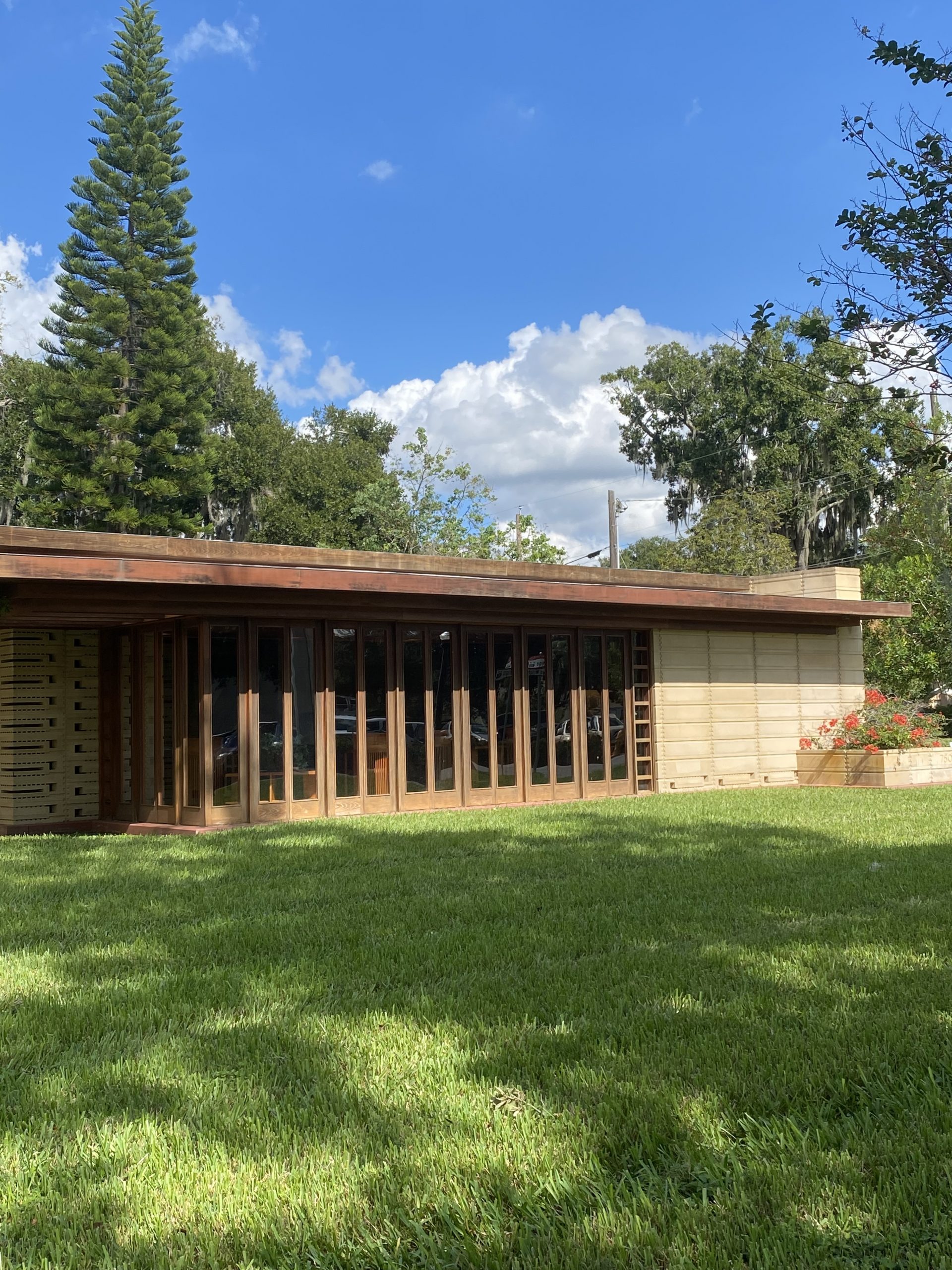 Fallingwater is probably the structure most people think of when they hear the name of Frank Lloyd Wright. And, yes, it is most impressive. The completion of Fallingwater earned the architect a cover spread on Time Life Magazine. Florida Southern College’s president, Dr. Ludd Spivey, picked up a copy of the magazine and sent a cable to Mr. Wright in 1936, appealing to his oversized ego by writing that he desired a “conference with you concerning plans for a great educational temple in Florida.” Dr. Spivey wanted to make his college a “campus of tomorrow,” and Wright was eager to give his career a boost, so in 1938, he visited the small Methodist campus in Lakeland, Florida. The college was founded in 1852 and the campus relocated around Florida a few times, but settled in Lakeland in 1921 on a 67 acre defunct citrus grove. 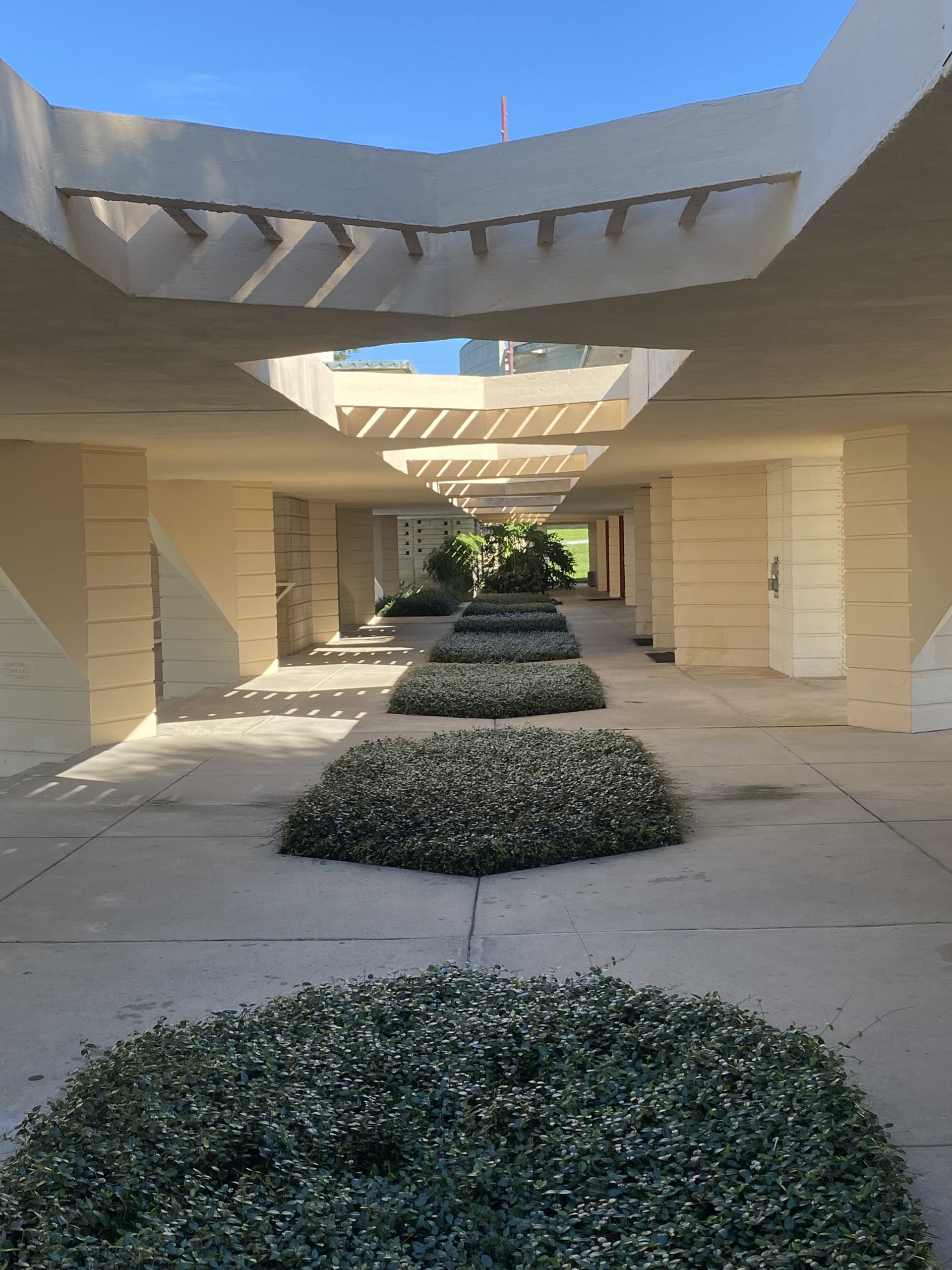 Covered walkways or  esplanades connect the Wright buildings and are over a mile in length. 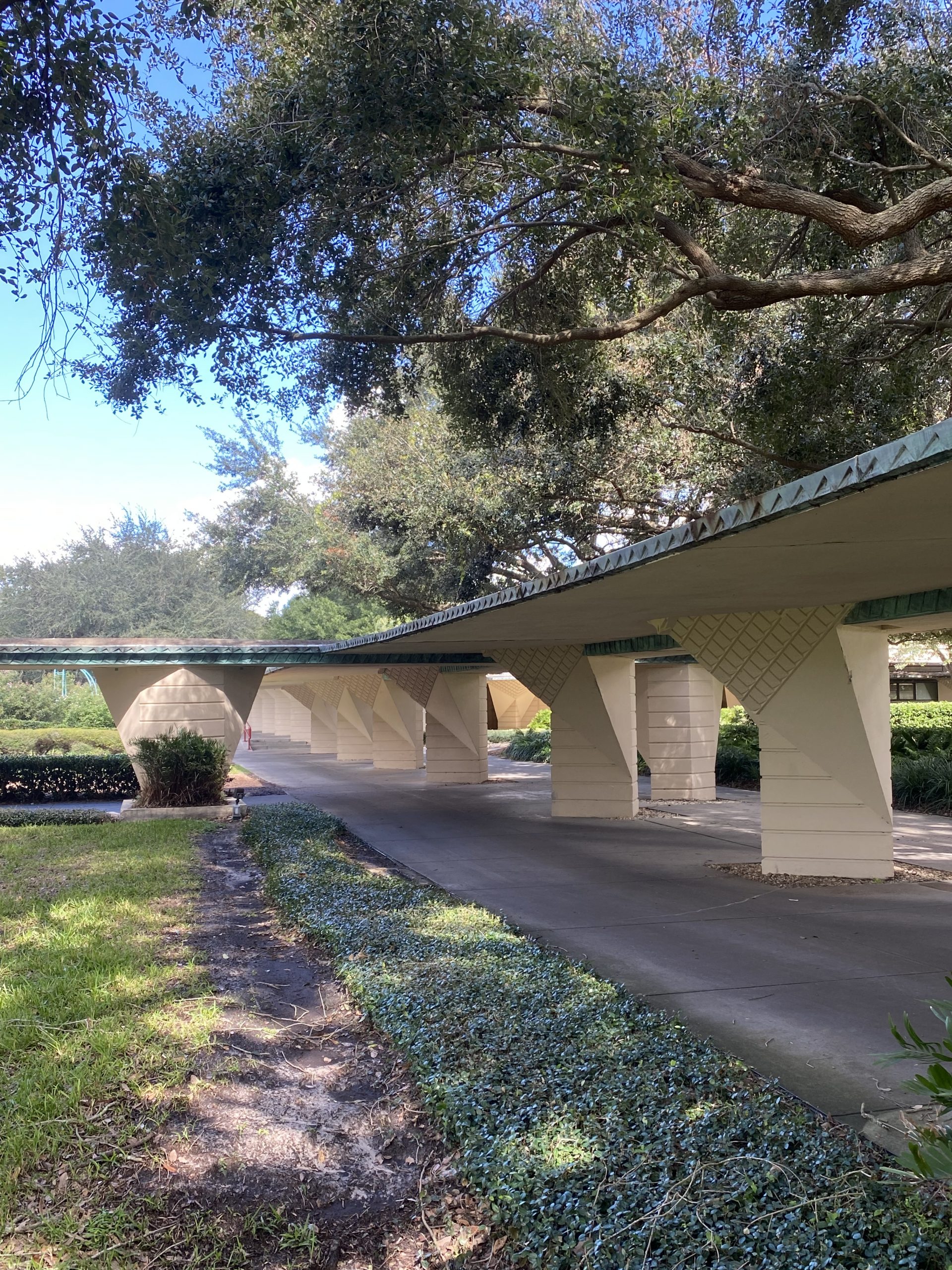 We have visited many properties designed by Wright over the years. Too many to count, actually. The cardinal rule when visiting his structures is “NO TOUCHING!” This is the first ever where it’s OK to touch. No one swatted our hands away as we brushed our fingers along the windowsills and walls of the buildings. Imagine our shock to learn that we could even sit down on Wright-designed furniture! After all, it is a college, so there are students everywhere and college students aren’t known for taking care of anything, at least not any college kids I have ever known. So if you visit Florida Southern, you can touch all you want. However, there is one place that is off limits. The centerpiece of the campus is a water dome that is 160 feet wide. To see students cavorting in this water feature or to see it overflowing with bubbles would not be odd to anyone who has ever spent much time on a college campus, but taking a dip in this dome will get you a $10,000 fine, so resist the temptation to splash around in it. Skinny-dip someplace else. However, graduating seniors do get their day in the sun (and in the water dome) the week of graduation just one time. 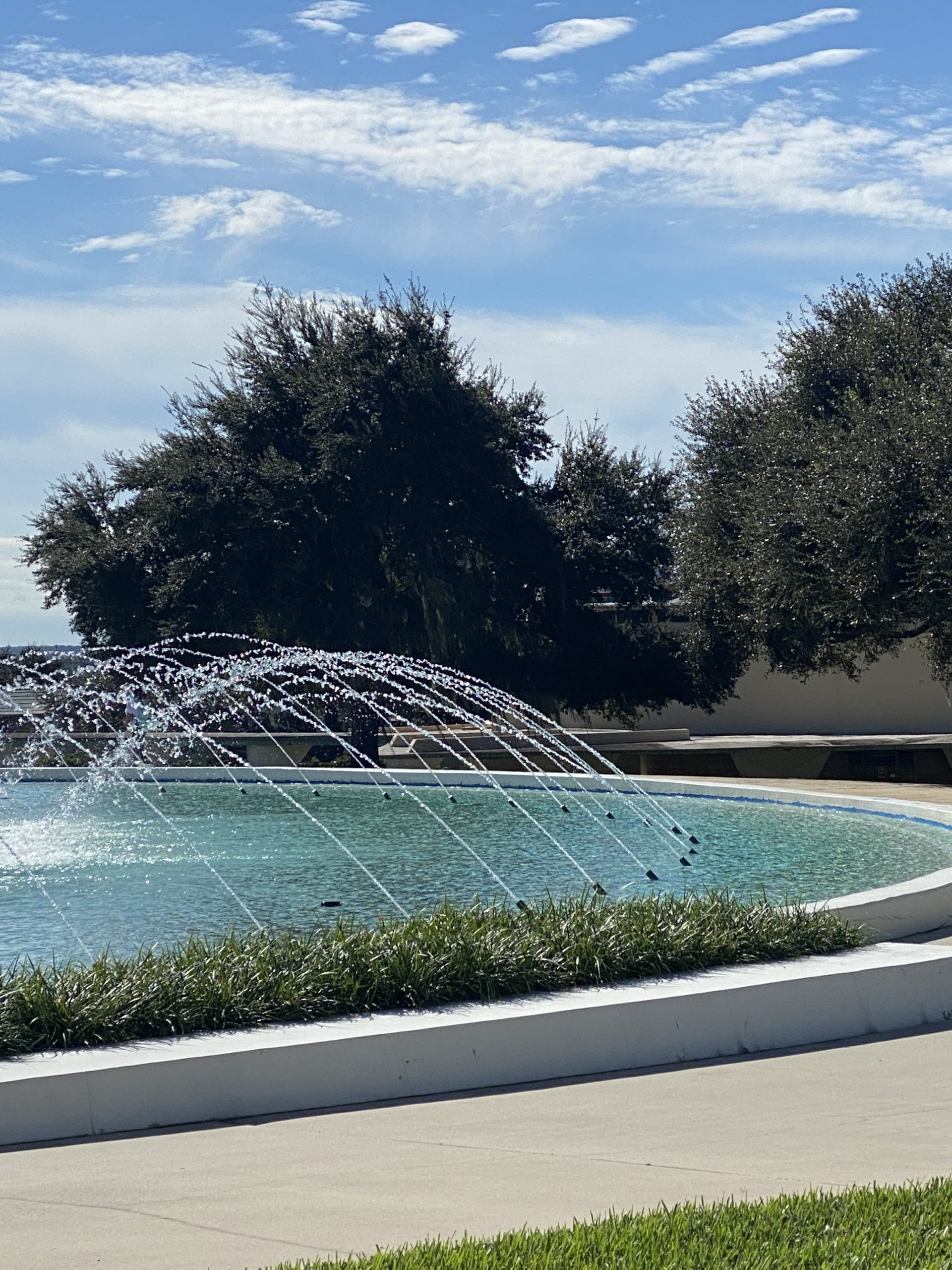 At one hundred percent power, the dome of water would reach a height of forty five feet .

At the time Dr. Spivey began his discussions with Wright, the college finances were a bit sketchy and that worried Wright a bit. He was a man who generally lived well beyond his means and he was counting on steady income and lots of good publicity from the project. Since the college was a bit strapped for building funds, student labor was used during the construction of the first five Wright-designed buildings.  In order to make ends meet, arrangements were made for the students to work three days each week in return for credit toward their tuition. During wartime, the student body was almost entirely women and therefore, the construction crew was almost entirely female. Using an unskilled labor force such as this resulted in a few glitches along the way, but everything worked out in the end.

Mr. Wright actually designed the buildings over a span of twenty-something years, so it is interesting to see concrete examples (pun intended) of how his thinking evolved through the years. Actually, twelve of the thirteen buildings he designed for Florida Southern were built during his lifetime and one more was completed after his death. This is the only college that Wright ever designed and, additionally, he never designed so many buildings for one client as he did for Ludd Spivey and Florida Southern. In case you re wondering: no, ironically, there is no College of Architecture at FSC.

Visiting this college campus was a joy, obviously because it is so unique. So often, institutions of higher learning are rows of fraternity/sorority housing and dreary old stone or brick buildings without any welcoming feature whatsoever. I understand that alumni love their stodgy old colleges. Shoot, I love the sprawling, helter-skelter campus of USC-Columbia but, let’s face it, it’s a place loved only by someone who feels a kind of a family connection with and/or spent four (or more) years there. 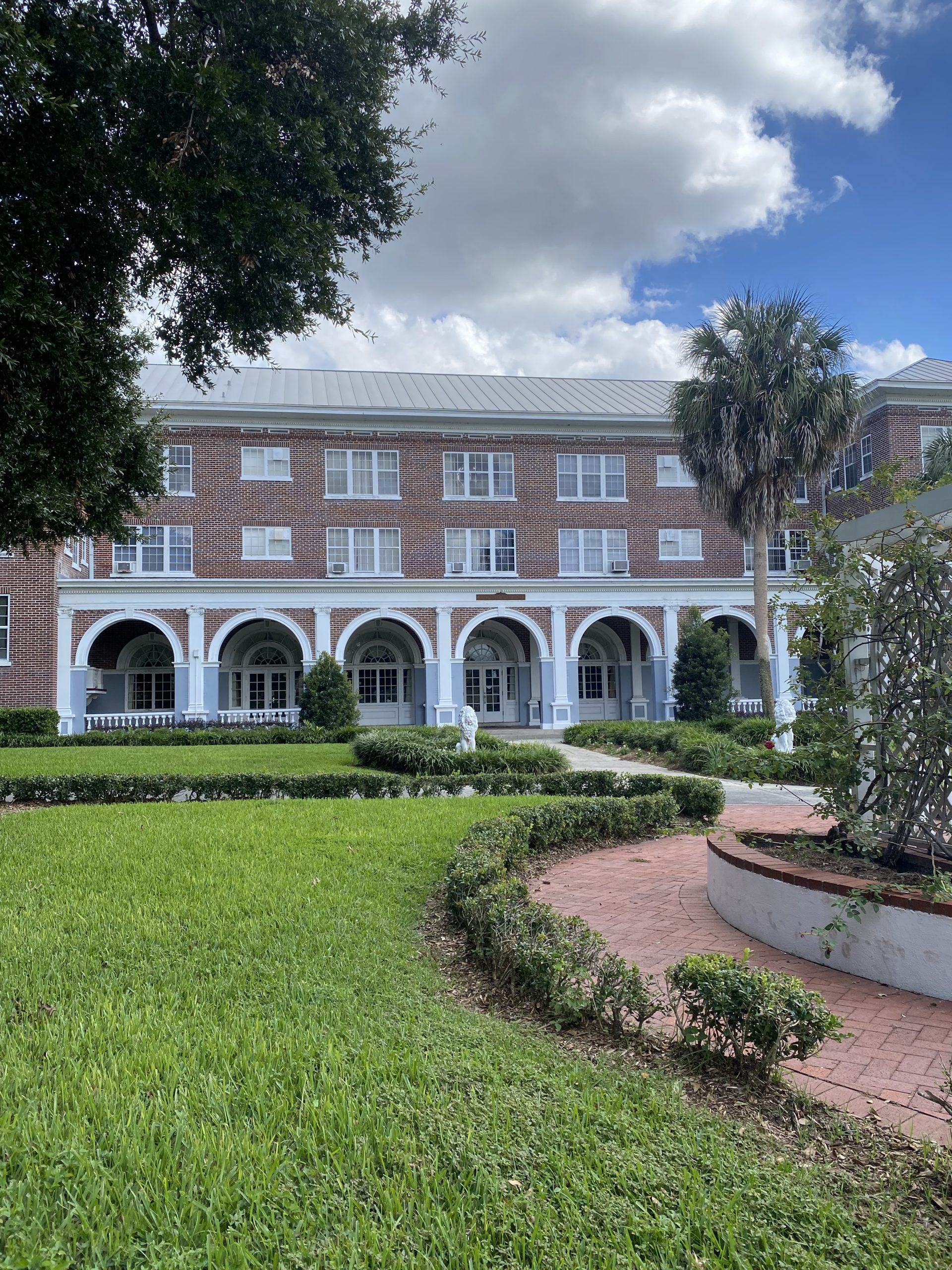 One of the original buildings at FSC before Spivey and Wright began their collaboration.

The Florida Southern campus is thought to be the only campus in the whole country constructed entirely in a non-traditional style. It is believed that Wright felt free to design in any way he wished since, according to “the great one,” Florida didn’t really have a “Florida style” of architecture (although there are probably Flagler College devotees who would beg to differ). But, really who, in all seriousness, could think that Wright was ever constrained by anyone else’s work? Apparently, Mr. Wright, who never missed a chance to take a flight of fancy, especially involving his own work, said this of his creation: “Every building is out of the ground into the light – a child of the sun.” Florida Southern is a one of a kind college campus designed by a one of a kind man.