Go ahead. Take a guess where that word originated. Piece of cake. Of course, you know; we all know. It just had to have come from France. Supposedly, the word comes from 1765 and a man named Boulanger. (But, wait. I thought that was French for “bakery” or “the baker.” See what you get for four years of high school French? Confusion.) Anyway, this Boulanger fellow began selling restaurants in a little shop near the Louvre. Apparently, since the Middle Ages, rich bouillons had been called restaurants. These meat-based consommes, enriched with onions and all sorts of other interesting vegetables, herbs, and grains, were intended to “restore” a person’s strength. Monsieur Bolanger hung a sign in the shop window proclaiming that he was selling “restaurants.” See where I’m going with this? In order to boost his bottom line, Monsieur Bolanger also served leg of lamb in white sauce, which ran him afoul of the caterers’ guild, but that’s another story. Let’s stick to restaurants.

But enough with the history of the word. Let’s get to the meat of the subject. Paris is arguably the food capital of this big rock we call home, and it earned this honor one delish meal at a time over centuries. Parisians have always had an incredibly adventurous palate. They eat things we would never consider “food.” They have always taken that “snout to tail” concept of gastronomy seriously. Any Parisian menu will prove my point. For example, the first time we were in Paris, I almost ordered the “tete de veau.” The waiter kindly pointed out that I would be eating the head of a calf. I flew home determined to hone my command of the French menu to prevent such near misses in the future.

The last time we were here, we found a little restaurant that we absolutely loved just down the street from our hotel in the 7th arrondissement. The food was incredible and the waitstaff was super nice; there was none of that snootiness Parisians are reportedly guilty of having perfected. So, when we started planning this trip, we went to work trying to remember the name of the restaurant. Fortunately, Rick keeps a pretty good journal when we travel, so he took a look back and found the name, which we immediately Googled. We were surprised to learn that La Petite Chaise opened in 1680 and claims to be the oldest restaurant in Paris. That means they’ve had plenty of time to perfect their menu and they have done just that. The interior design, however, remains firmly rooted in the era of the Franco-Prussian War. It’s kinda shabby, but that’s part of the charm. Another thing, that name has been marinating in the form of a question in the back of my mind because I always thought that the French word “chaise” meant “chair” in English. Turns out that the name is a distortion of the Old French word “cheze” which means house; therefore, the name originally meant “small house.” 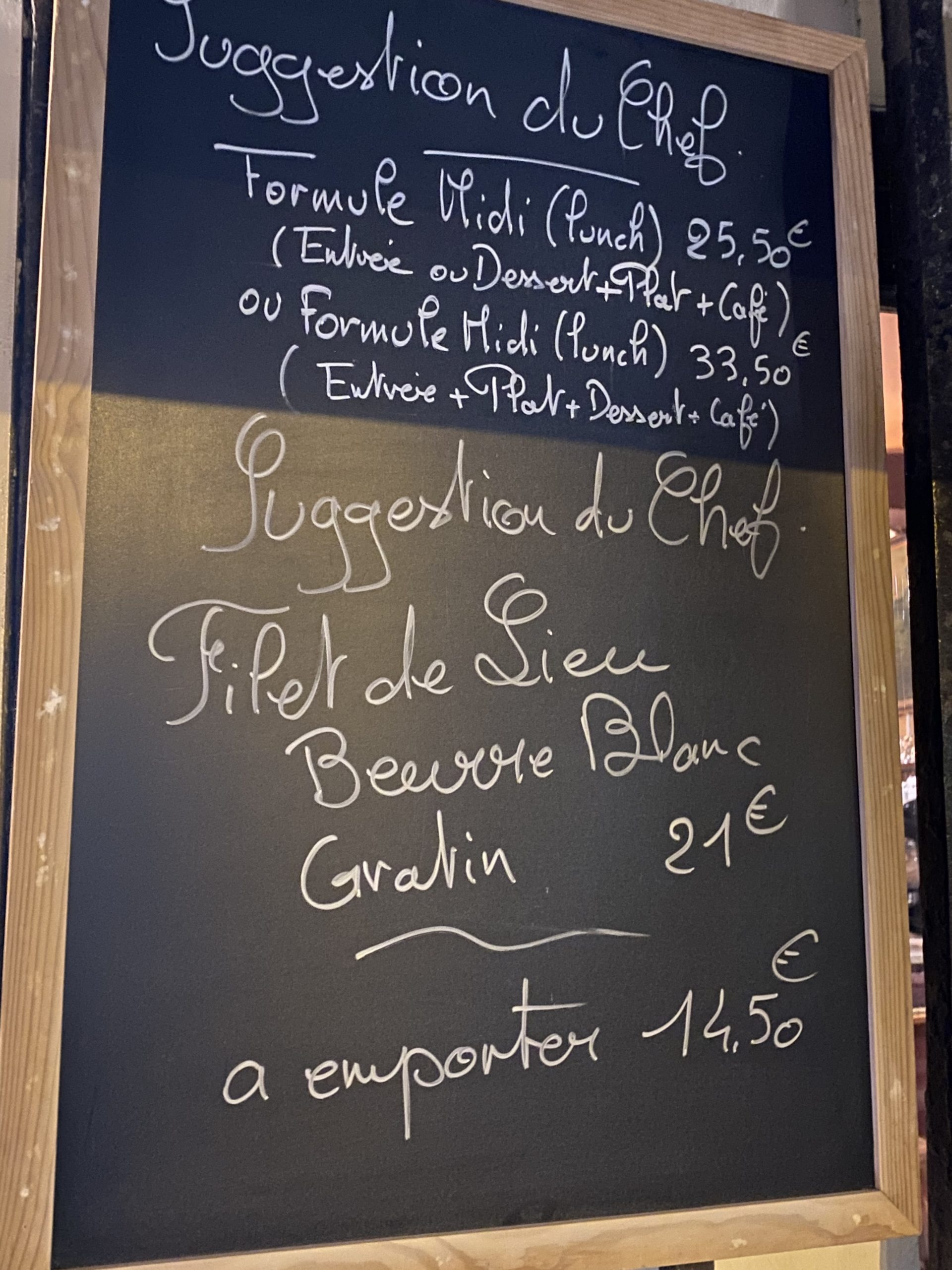 What’s not to love about a French bistro? 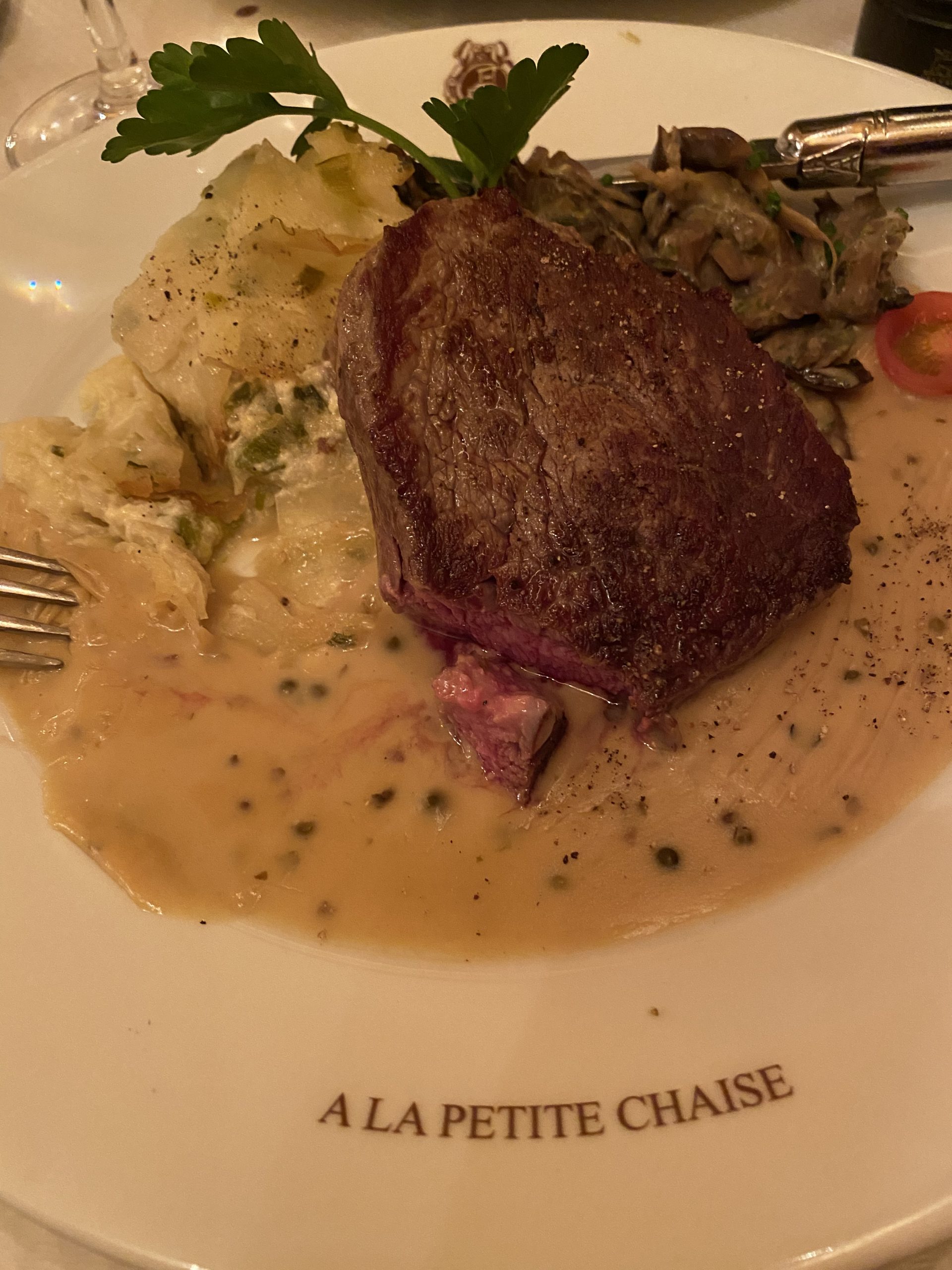 Bovine splendor on a plate.

The question of which establishment is the oldest got complicated when, while listening to an audible version of a book several weeks ago, we heard that another place called Le Procope also makes the claim, so I checked it out. I think it may get down to semantics. Le Procope calls itself a cafe or a cafe-restaurant.  There seems to be a distinction. It welcomed its first diners in 1686. According to the cafe, Napoleon Bonaparte, Thomas Jefferson, and Benjamin Franklin, as well as a long list of history’s other notables, have put their boots under a table there, so we took our rightful place on that list Tuesday night. Unfortunately, both the food and service were lacking. I guess it’s hard to keep up the good work for centuries. I pretty sure T. Jefferson would have flipped his wig had he been served that overcooked steak by that surly waiter. 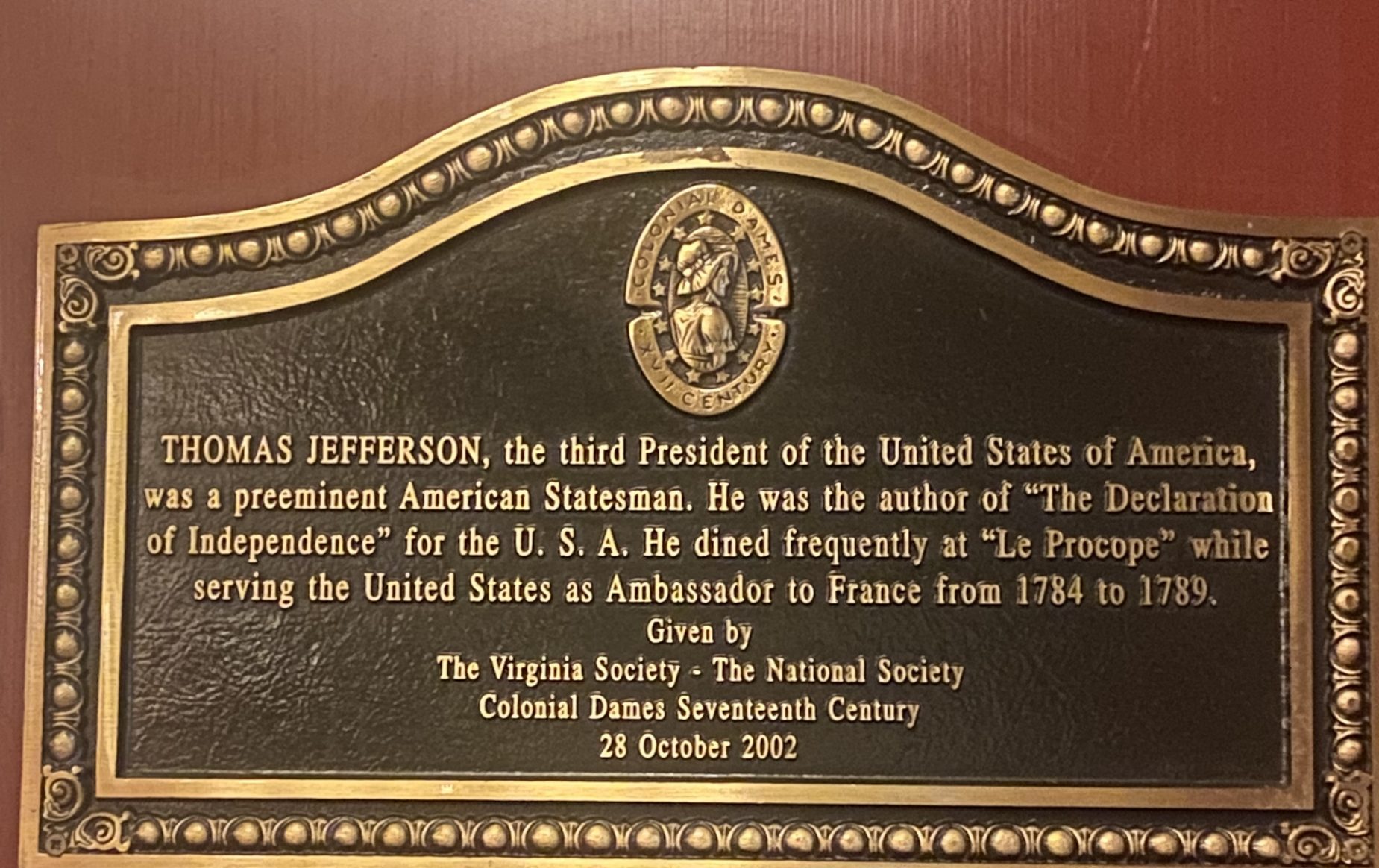 We tossed up our white napkins in surrender when we read that La Tour d’Argent jumped into the fray, too. This place, dating to 1582, has a rather interesting history. It is supposedly where France’s King Henry IV used a fork for the first time, which history records as a momentous occasion.  It caused quite a stir and was the talk of town because, with a fork, the well-to-do could eat their meals without getting drips and stains all over their ruffs. (You know, those ruffled things gentlemen used to wear around their necks.) Henry IV loved to dine there on their heron pate. (Do you think it was the same kind of heron I watch outside my window every day? Please say, “Non!”) Since La Tour d’Argent has served more than one million ducks over the centuries, they now have their own duck farm. I’d say this was probably a wise business decision.

We decided to let others debate the age of various eating establishments and to instead take a stroll down our short little memory lane of Paris restaurants. Time would not permit revisiting all of them, but we had a delightful conversation remembering the likes of Bofinger and Le Train Bleu, both of which we visited back in the 1990s while in Paris with the group we call “The Swiss Family,” which is basically my cousin, Jean and her husband, Heinz, as well as various members of her family, and her Swiss in-laws. I remember seeing a seafood tower for the first time at Bofinger. (By the way, wouldn’t you think the French would spell that word “Beaufinger?”) Well, it may not have been the first seafood tower I ever saw, but the French took that tower to staggering heights. It was quite a spectacle.

Then there is Le Train Bleu. This restaurant is in the Gare de Leon train station. You wouldn’t think this place would be high on any list of recommended restaurants, would you? (I got really sick one time from something I ate at a train station restaurant in Bordeaux, but I am pretty sure no one wants to hear about that.) Le Train Bleu was unveiled at the fin de siecle by Emile Loubet, the President of France at the time. It opened as a station buffet during the Universal Exhibition (or 1900 Paris Exposition, as it is also called). This restaurant is stunning to behold; you will swear you just stumbled into the Belle Epoch. This lovely restaurant boasts of a list of regulars like Coco Chanel and Brigitte Bardot. I love the description of an architect by the name of Jean-Marie Duthilleul: “Conveying these images to people makes them dream of another world. Le Train Bleu was like a doorway to the Mediterranean in Paris and trains on the platforms are like ship setting sail for exotic destinations.”

When we were there back in the early to mid-1990s, a server dropped a whole armload of dishes and they crashed all over the floor. I was in what I refer to as my “mosaic phase,” so I asked Jorg, my cousin’s brother-in-law, to ask the server if we could have some of the broken pieces of china. We flew home with a bag of broken plates and I made a couple of mosaic frames. I kept one for us and I still dearly love that frame and the picture within. We traveled all over France, Italy, Austria, Hungary, and Germany with this motley crew on several occasions and the van was never populated by the exact same gang from one time to the next, but always full of people who loved to see interesting places, buy cool stuff, eat great food, and drink excellent wine. The van was always driven by a fellow named Roger towing a trailer full of luggage. 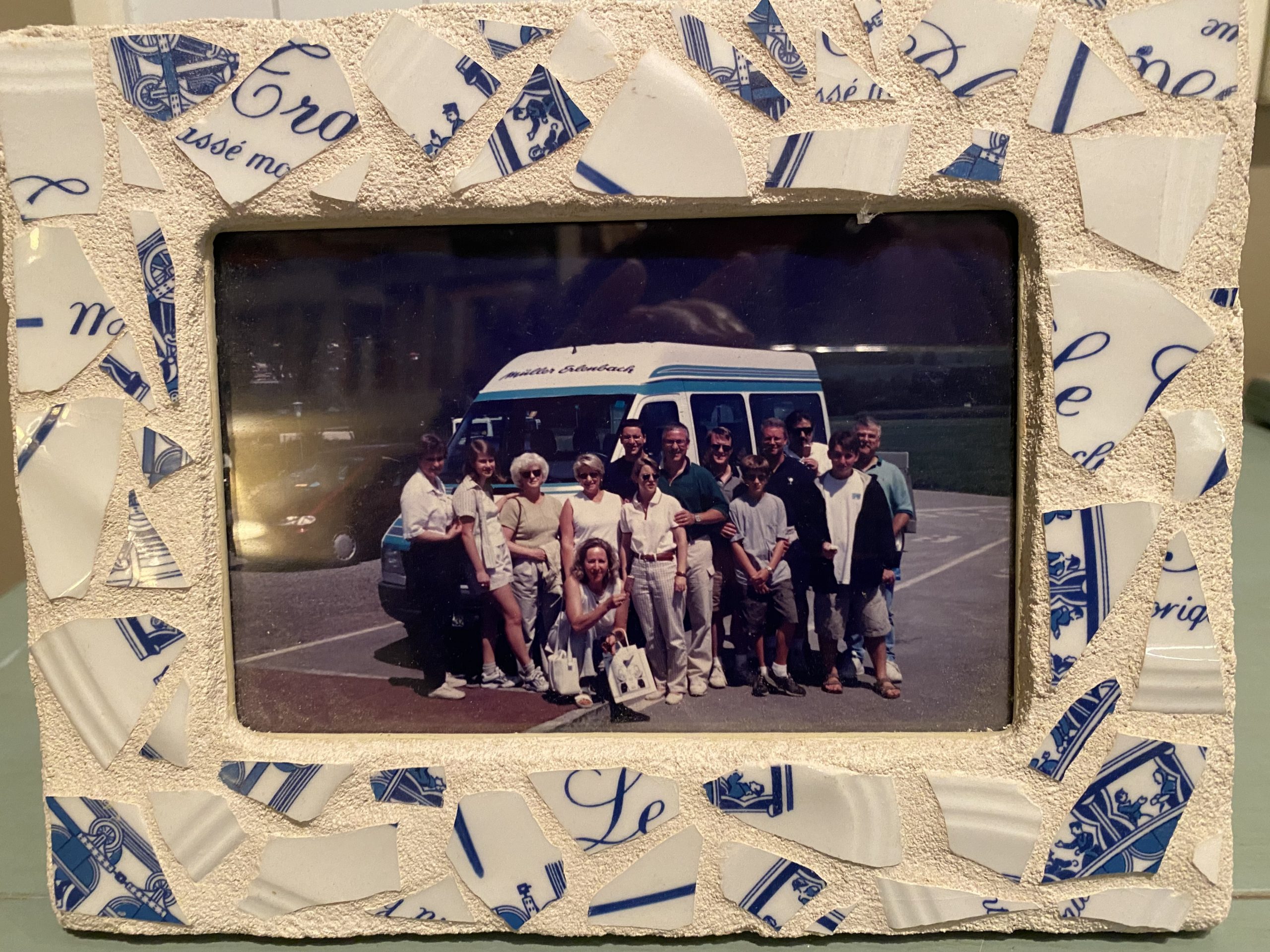 Mosaic frame from Le Train Bleu. I love the little bits with train scenes, especially the chip in the right corner.

OK. Time to get this post back on track. When this began, I believe that we were discussing Parisian restaurants. (By the way, as a side note, TripAdvisor says there are 15,721 restaurants in Paris.) I can’t finish this post without mentioning one of our favorites. Les Ombres sits like a crown on the top floor of a museum called Musee Branly and has a phenomenal view of the Eiffel Tower. We have dined there twice, I think. The first time was in the winter. We had taken the Eurostar through the Chunnel from London to have lunch in Paris (yes, it was as cool as it sounds). We dined inside because it was cold outside. The food was fabulous if overpriced, but somebody’s gotta pay for the location, right? We were back in London in time for dinner at a super Indian restaurant! The second time we had lunch there, we were with Logan and it was summer, so we dined on the deck. I really wanted to post a wonderful picture, but the one below is the only one I can find right now. It’s not the best picture of Logan or of the Eiffel Tower, but it will give you an idea of what a spectacular view Les Ombres encompasses. I wish the umbrellas had been closed! Nonetheless, if you are a visual sort of person and a Francophile, the view of that magnificent structure will bring you to your knees. I had hoped to dine there again this trip, but there is some sort of gazillion-Euro pop-up “event” going on in that space right now. Honestly, I think the dinner there right now is about 350 Euros because there is a fancy chef’s name attached to the meal. It’s good, but not that good! 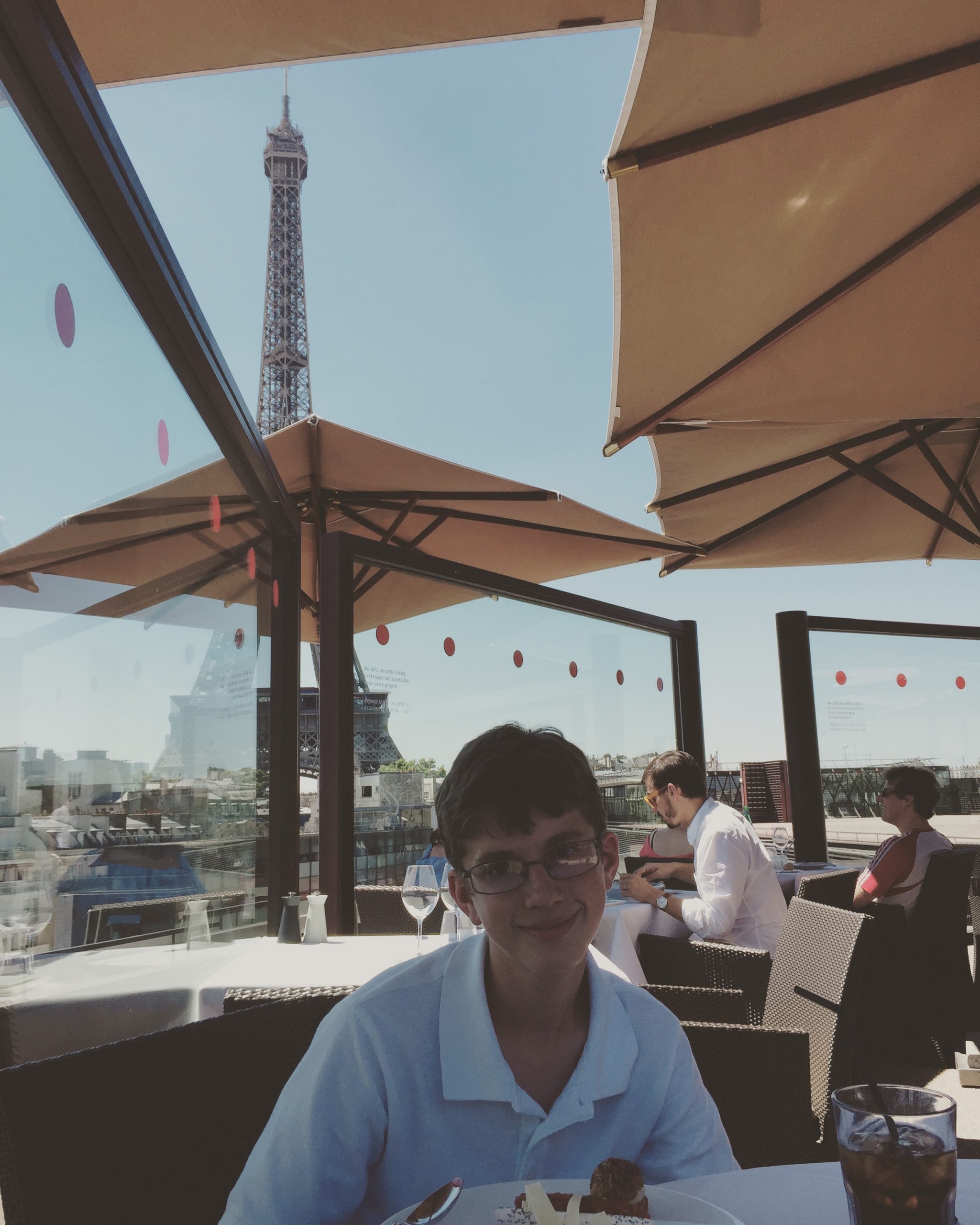 Without running on and on with boring details, I have to report on our activity this afternoon. Since it is related to food, this seems like a good place to mention it. Since this is our third trip arranged through Wendy Perrin’s network of travel planners, she treated us to a surprise event which she calls a WOW moment. We were met this afternoon at 1 PM in the lobby of our hotel by a great guide by the name of Freddie. He surprised us with a two and one half hour food tour of our Saint-Germain-Des-Pres neighborhood. But this was not just any old food tour. Non! We popped in at about eight or ten bakeries, patisseries, and chocolate shops. We tasted some of the finest chocolates we have ever put in our mouths. We sampled macaroons, financiers, chocolates of all types and flavors, eclairs, merengues, pastries, and handmade marshmallows. Stuffed, we had to bring much of it back to our room and save for (much) later. Freddie also told us a lot about the lifestyle of the average Parisian and French culture in general. It was a super tour, but with dinner looming in a few hours, we are hitting the avenues and rues for a little exercise in hopes of getting hungry for dinner. Usually we end up in a bar, but at least we try. I will finish with photos of a few works of (food) art. Bon appetit, y’all! 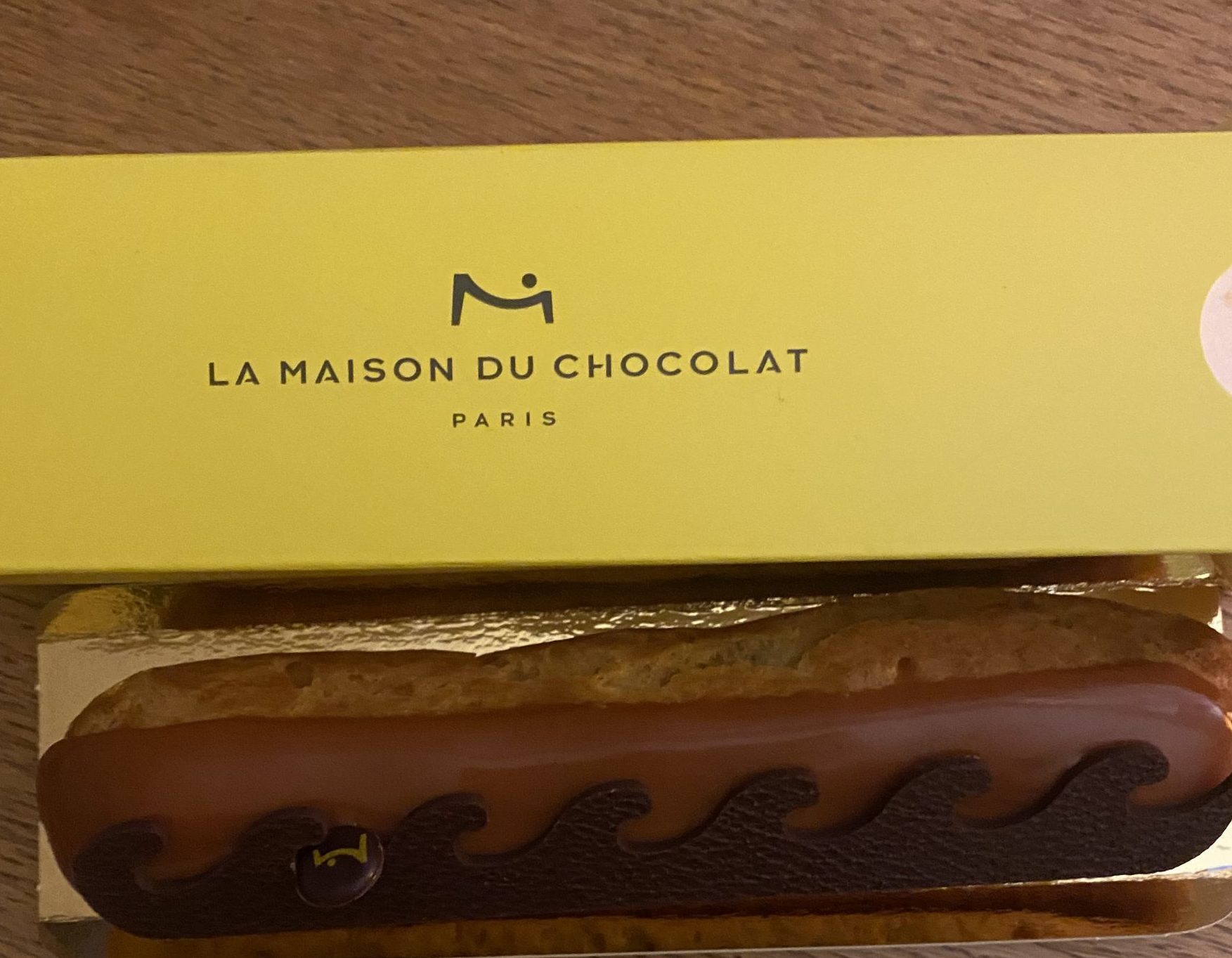 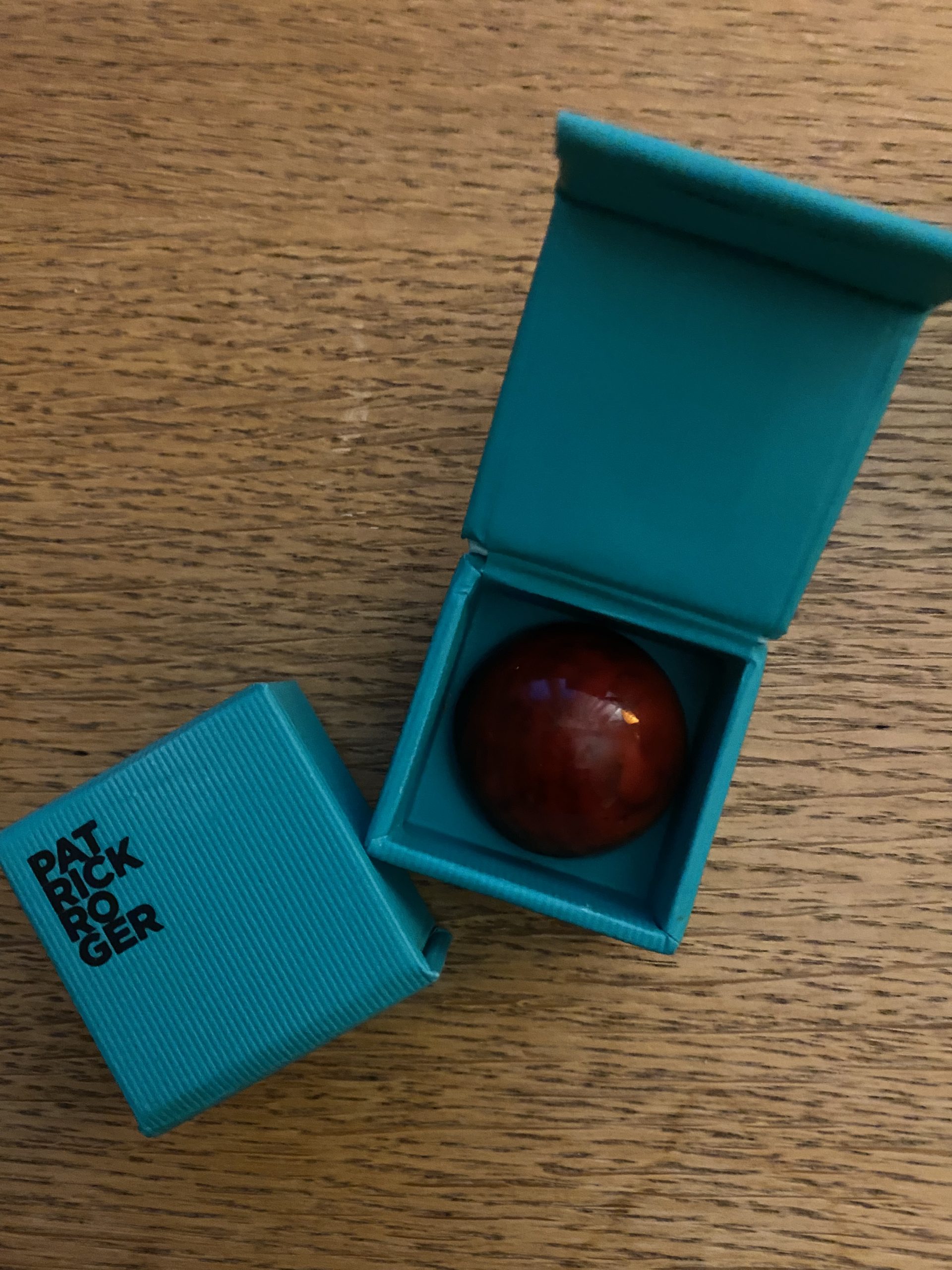 Each of these little lovelies takes hours to hand paint with chocolate! 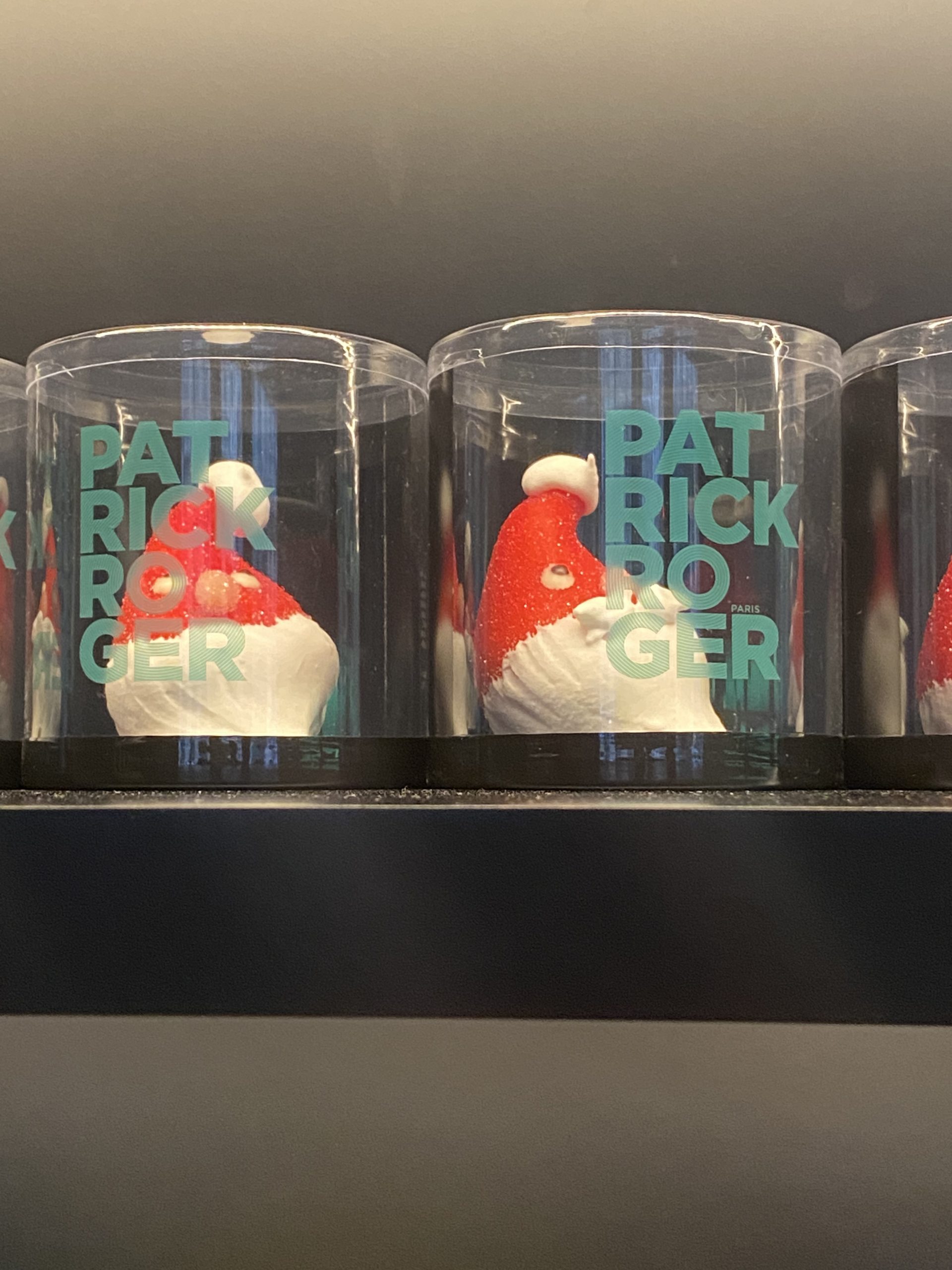 Too cute to eat!